Send in your photos, please! That is, if you want this feature to keep going.

Today’s selection is from regular Mark Sturtevant, whose IDs and captions I’ve indented.

I had recently described a visit to an “ichneumon tree”, a dead tree that had several giant ichneumon wasps on it. These are large wasps, and females have a very long ovipositor (described as the longest of any insect) for drilling into wood to parasitize the larva of a ‘horntail’ wasp. The ichneumons would repeatedly come to this tree for several days, and so I made it a high priority to come back as soon as possible for more pictures. Sure enough, on the second visit the wasps were still there, but among them was — a Mysterious Visitor.

To reprise, the first pictures show our two local species of giant ichneumons, both of which were on the tree. First is Megarhyssa macrurus… 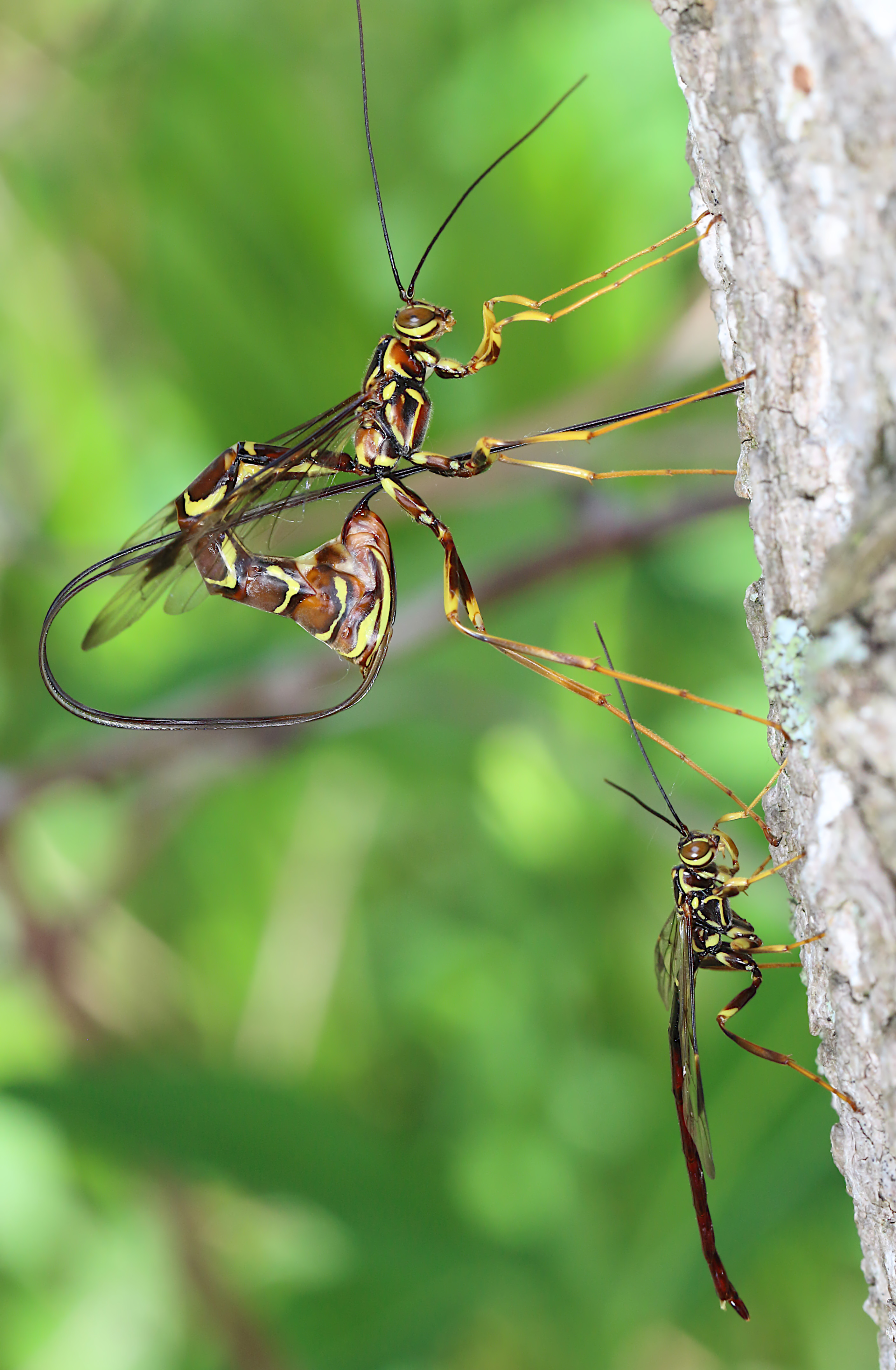 … and then the very formal looking Megarhyssa atrata. The slender wasp also in the pictures is one of several male giant ichneumons (possibly M. macrurus) that were presumably hoping to pass on their genes. 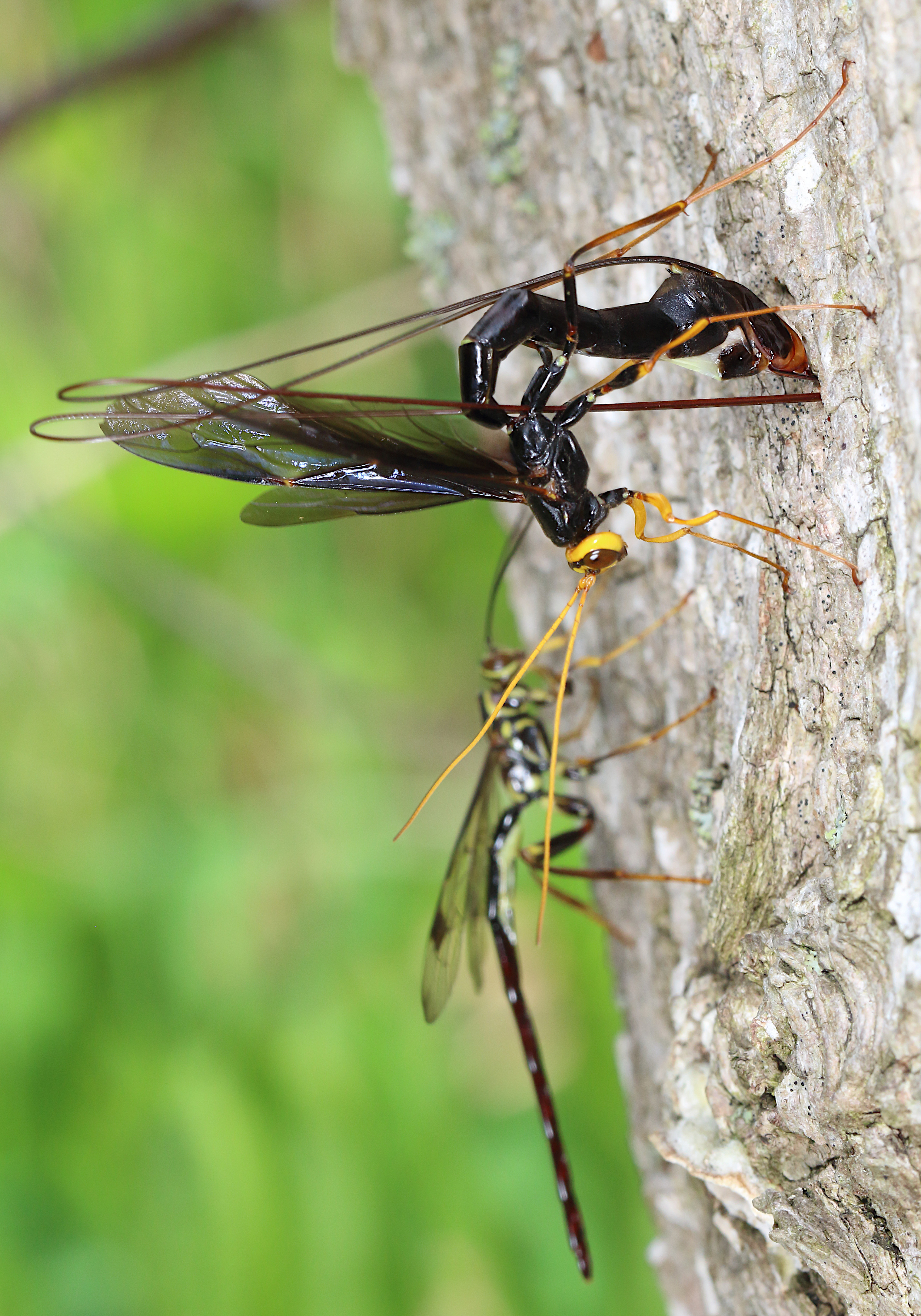 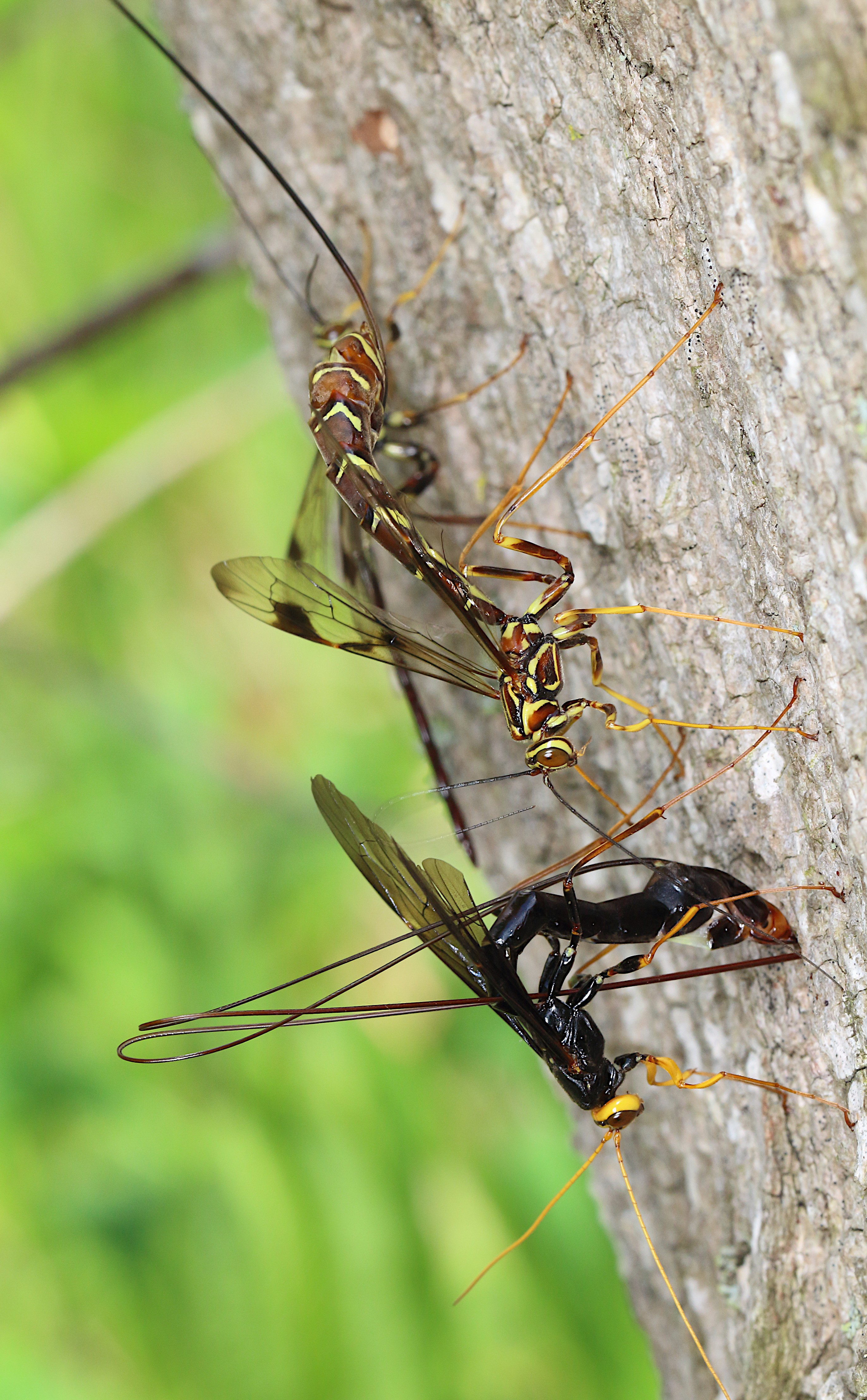 Next is where things began to get a little weird. Here is a M. atrata, but note the little wasp in the foreground. At first I gave this no thought. 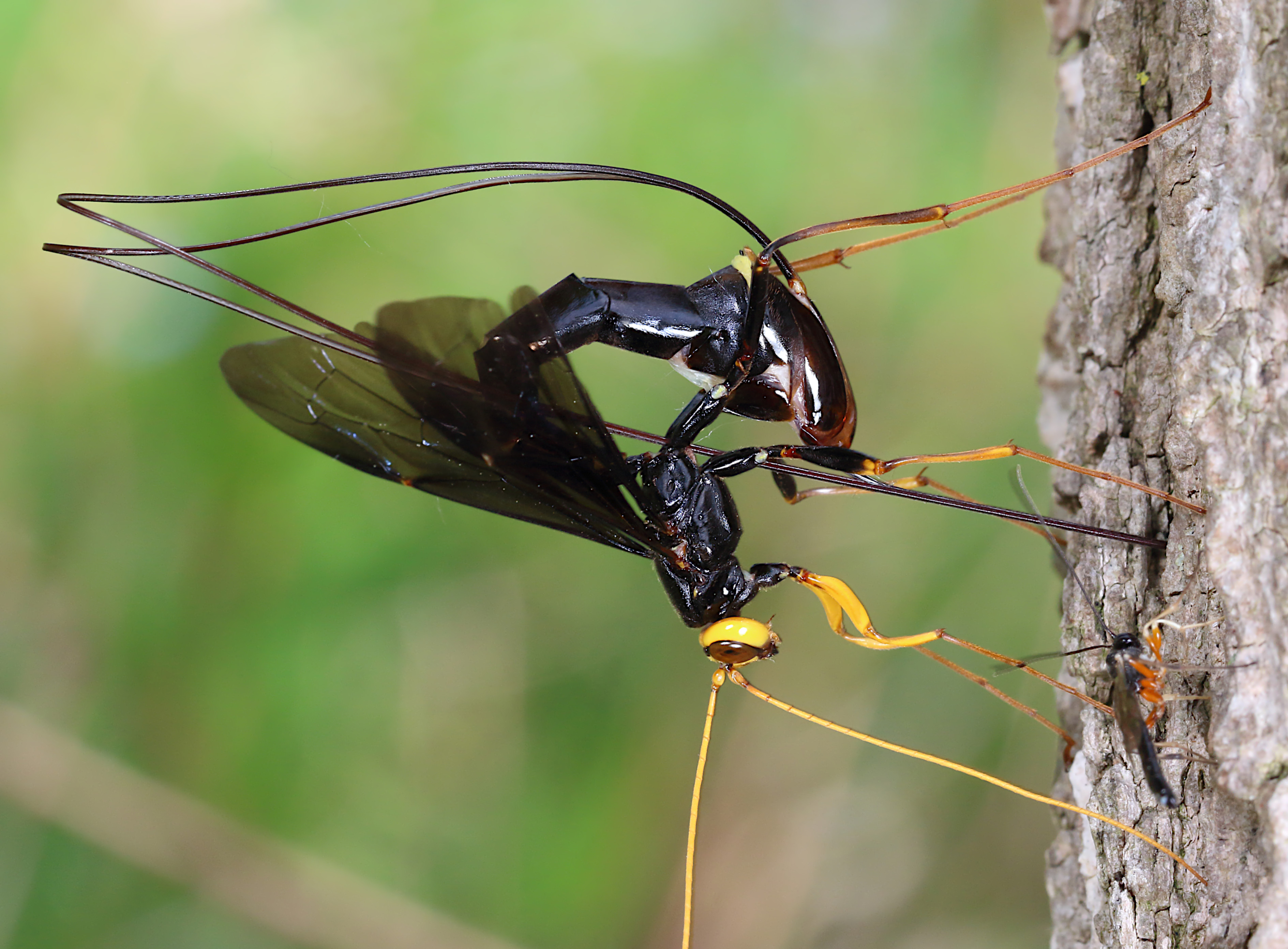 After some time, I noticed that the little wasp had moved on to one of the M. atrata females! The big ichneumon definitely was annoyed at this, as she wandered restlessly up and down the trunk and uselessly tried to swipe the little pest away. But the little wasp was able to stay upon her by sitting along her midline where it could not be reached. Eventually the giant ichneumon gave up and began to drill into the wood while her rider seemed to watch attentively. This was baffling. 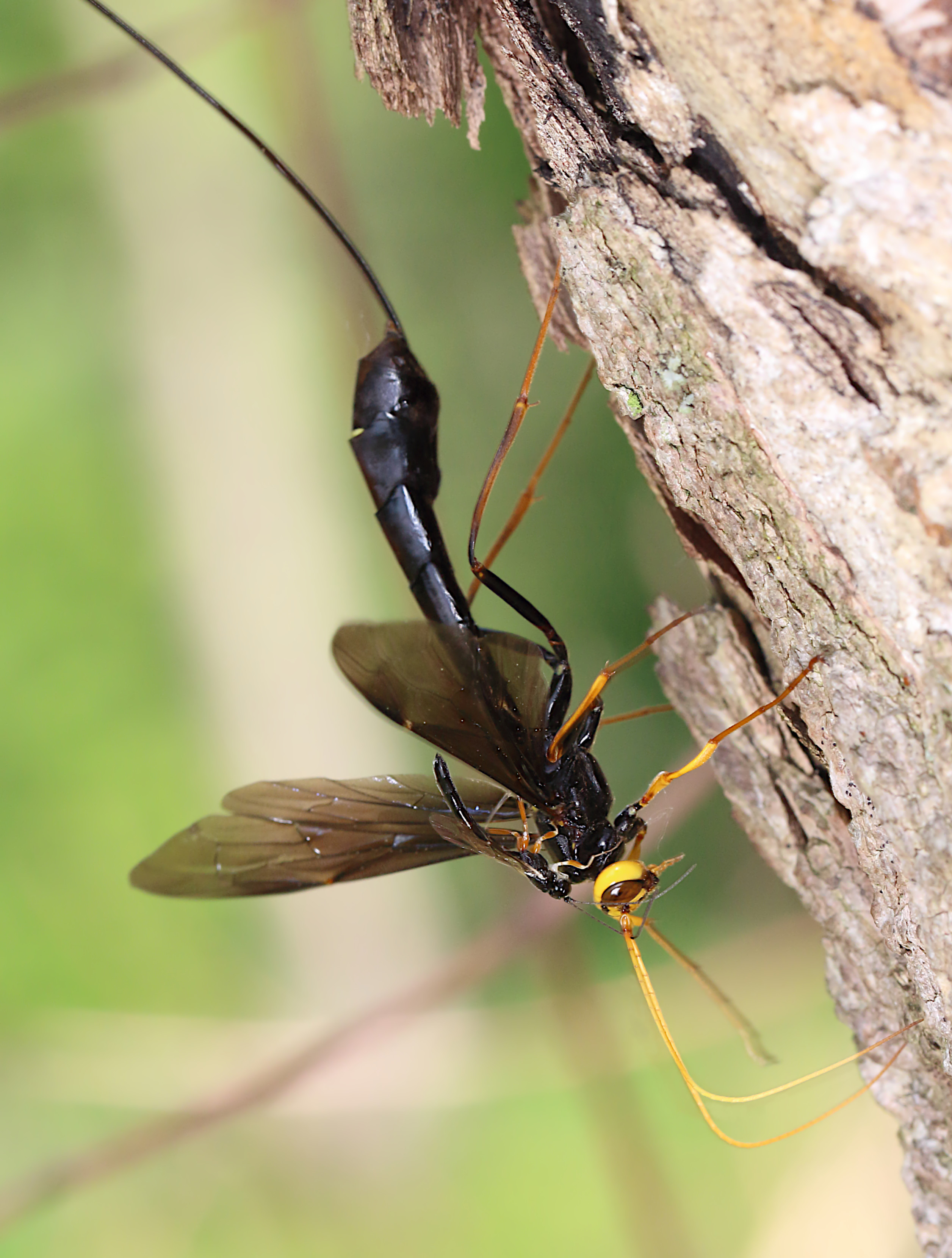 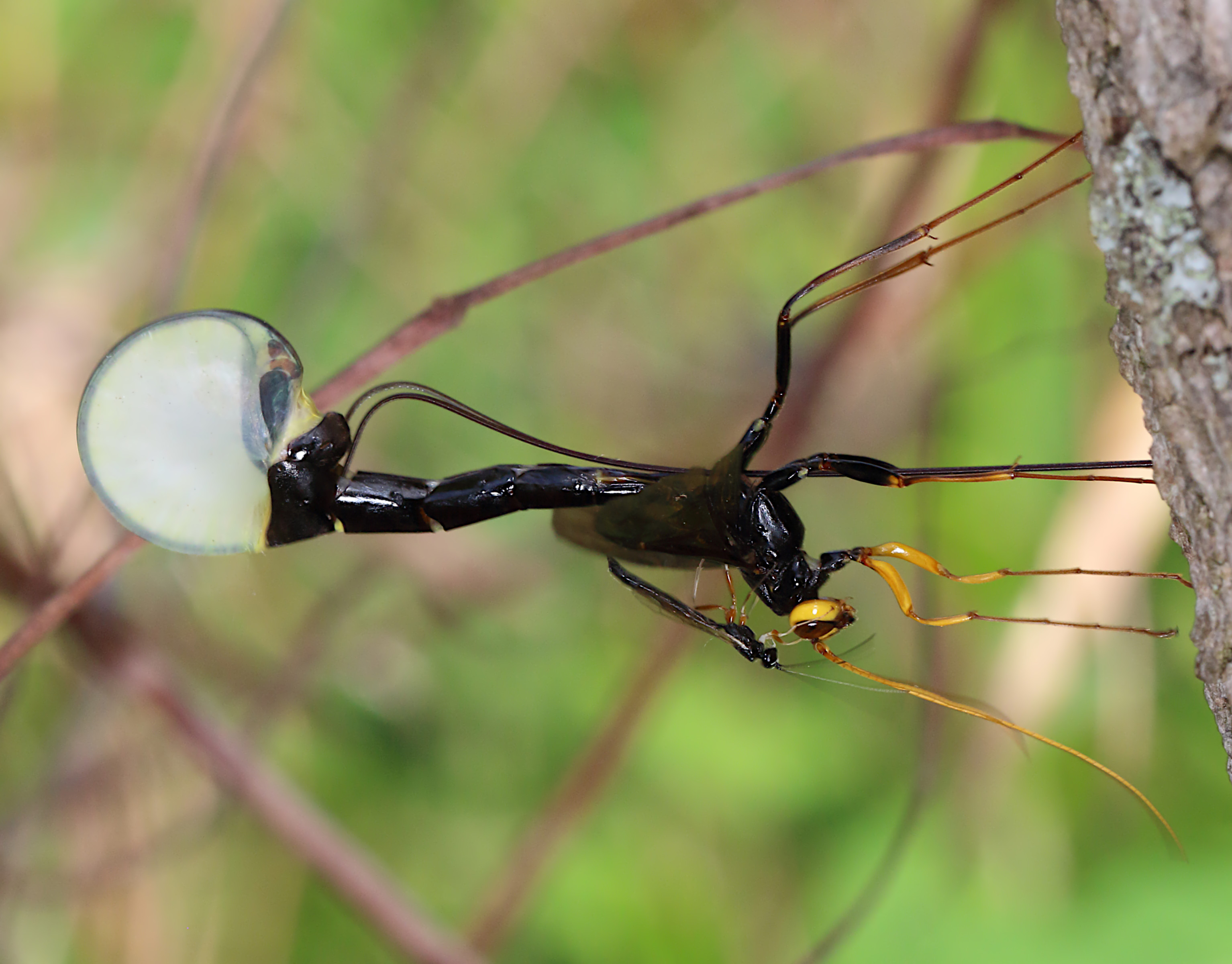 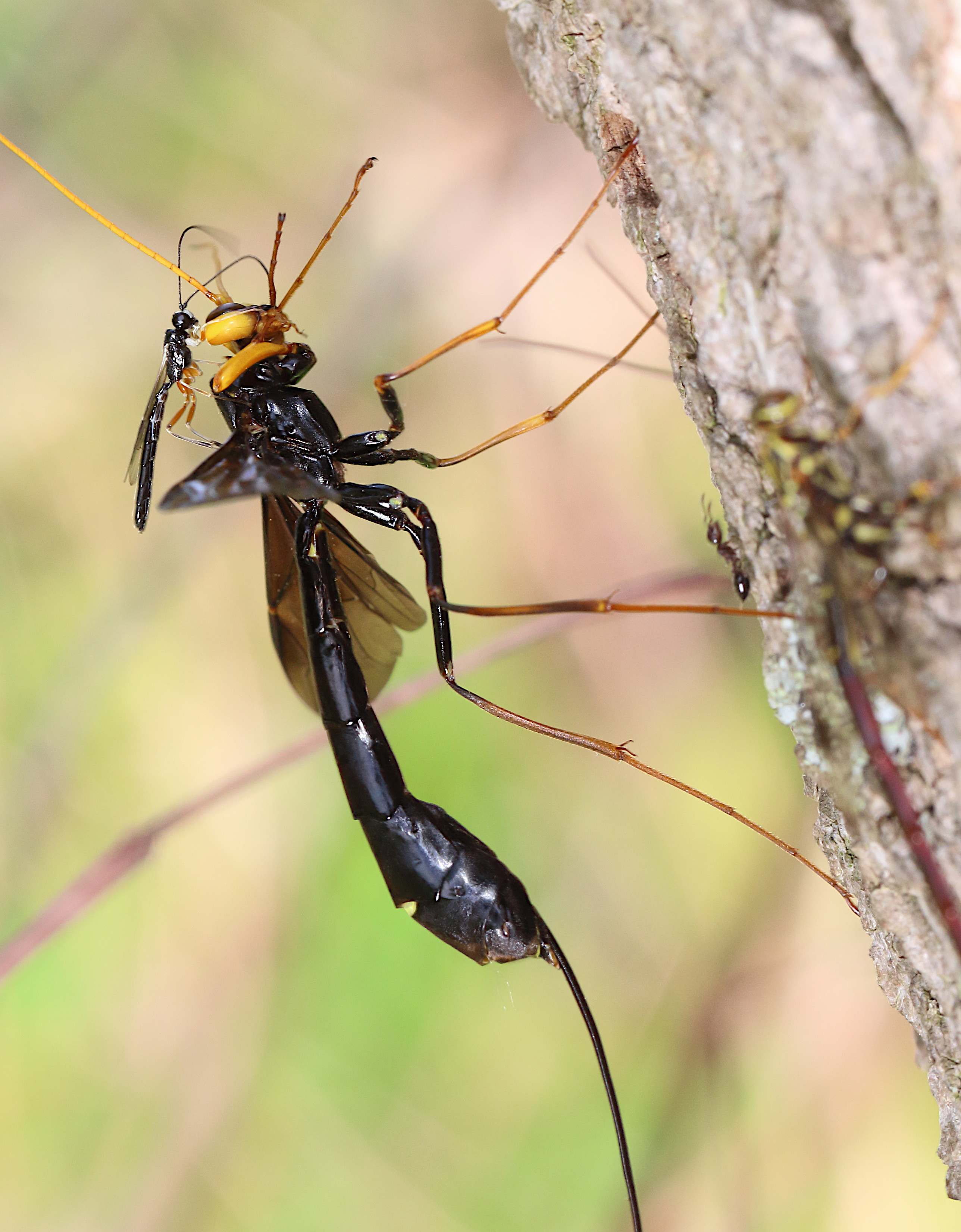 At first, I was thinking the little Mysterious Visitor was a hyperparasite (a parasite of a parasite). Indeed, my perusal online turned up a group of ichneumons in the Xoridinae subfamily that do parasitize ichneumons, while others are parasites of horntails. So that seemed a possibility. But I sent pictures to BugGuide to get expert opinions on the matter. For those who do not know this resource, BG is an informal but enormous online database and picture repository for insects (and other arthropods) of North America. It has various search functions that are very helpful at identifying critters. The reason why I can post pictures of obscure arthropods with ID’s is mostly because of searching through BG. Anyway, upon receipt of my pictures, a crack team of Entomologists leaped into action to study the situation (at least that is what it seemed like). An answer came very quickly: our little mystery wasp was likely from the genus Rhysella – so actually in the same subfamily as the giant ichneumons and not the subfamily I had thought. More specifically, this is a male, and so is presumably very confused about his mating prospects (!) It is known that male wasps are often “twitterpated” by females of the wrong species.

To wrap up, here are some more damselfly pictures. While kayaking on a local lake, I noted that out on the lily pads were these beautiful orange damselflies, and that was something new. A second trip with a camera soon followed, and here is a picture. This is a young female lilypad forktail damselfly (Ischnura kellicotti), a species that spend their entire lives out on lilypads. When she matures, she will develop a pale blue color, while males will turn blue and so resemble a ‘bluet’ damselfly even though they belong to a different group. By the way, taking a heavy camera out on a tippy kayak is extremely dumb. Don’t do it. 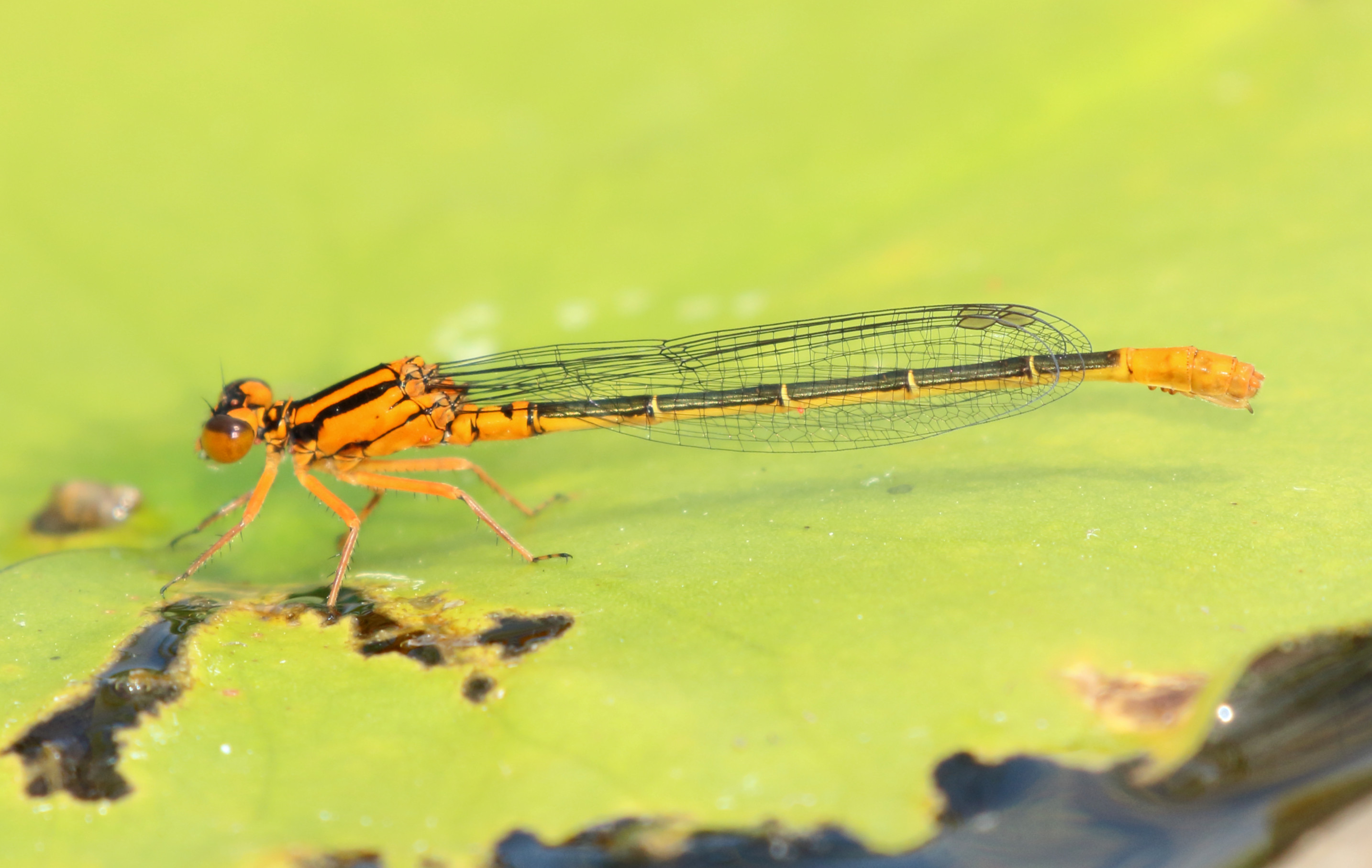 The last picture is possibly of a young male ‘familiar’ bluet damselfly (Enallagma civile) that will later turn a lovely cobalt blue as he matures. Nothing remarkable, really, but this is one of the first successful pictures that I had taken with the help of the marvelous Helicon Fb tube, which is an attachment for doing rapid focus bracketing with an ordinary Canon or Nikon dslr camera. Focus bracketing is where one takes a series of pictures at slightly different focal points, and these are later ‘stacked’ with special software to make a single picture with extended focal range. So now I too am a “stacker”. 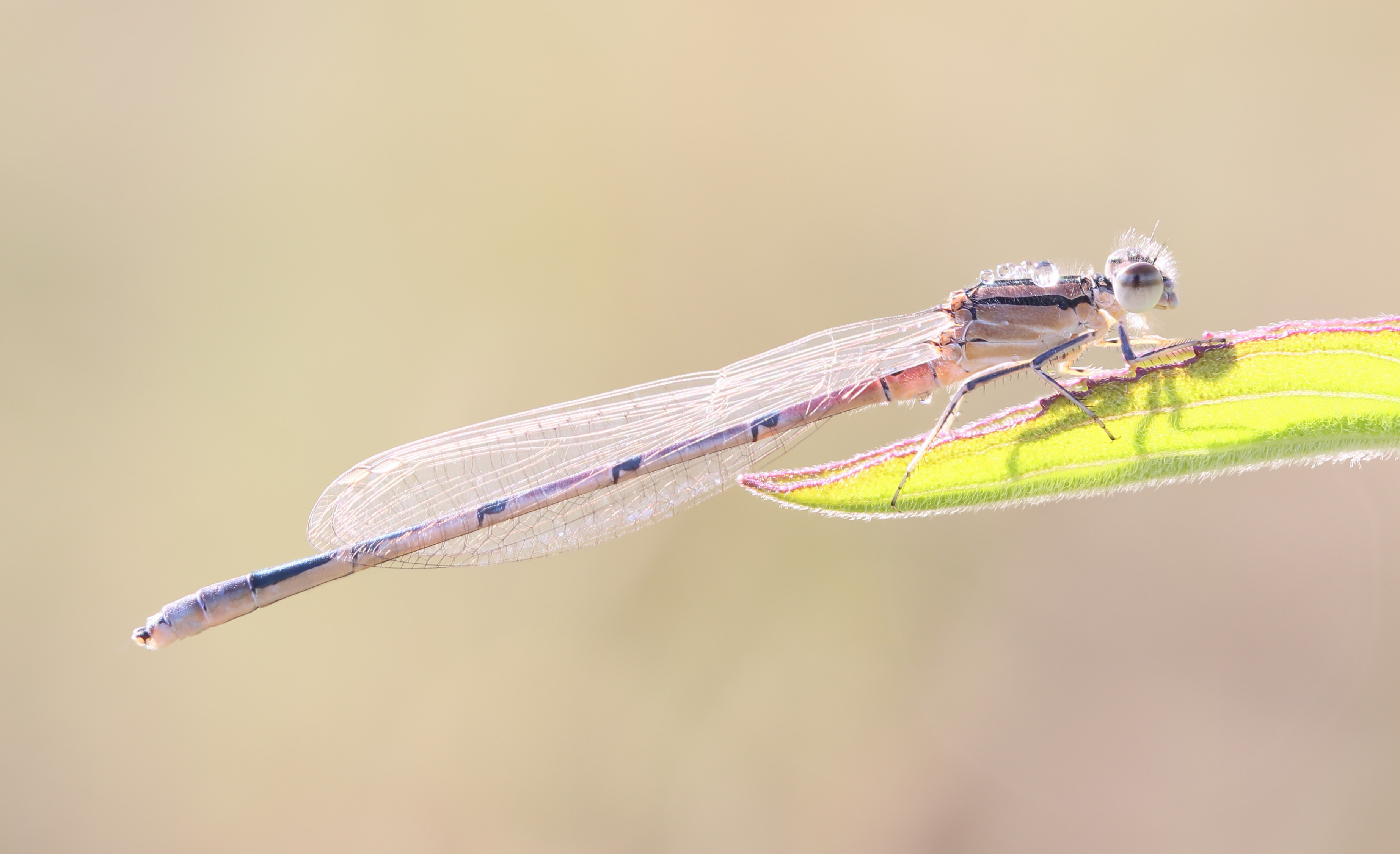