According to both the New York Times and Variety, the Academy of Motion Picture Arts and Sciences, which awards the annual Oscars, has set new diversity standards for the Best Picture award. The standards, though they don’t apply to other categories like Best Actor, could apply to other awards like Best Animated Feature and Best International Feature, and, according to Variety (which has the better of the two articles), these categories will be addressed later. 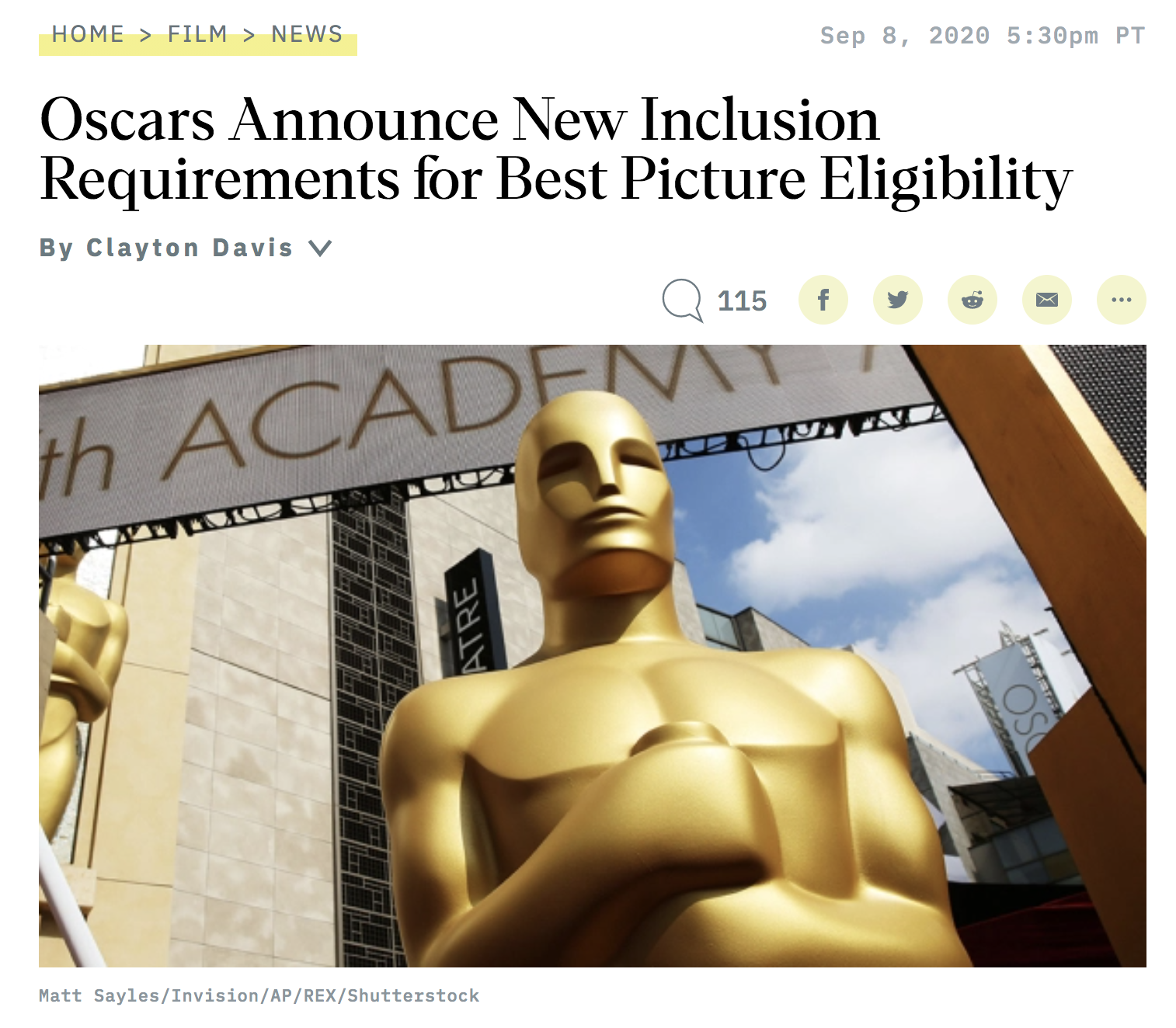 The action is a response to the outcry about the lack of diversity in awards as well as the composition of the Academy, which led to the well known #OscarsSoWhite campaign in 2015. In response to the lack of diversity (racial diversity, though the adjective is rarely mentioned), the Academy did make and fulfill a promise to double the number of women and minority members between 2016 and 2020. This new initiative is meant to address diversity in films, both in front of and behind the camera.

The changes come in two steps. First, for the 2022 and 2023 Oscar nominations, Best Film applications will have to submit a confidential form to the Academy about “Inclusion Standards” if the film is to be considered. There’s no word on what this form will ask.

Then, beginning in 2024, any Best Picture nomination has to meet at least two out of four sets of diversity standards, one for the actors in the film; another for diversity of “creative leadership and department heads” (casting director, makeup artists, cinematographer, composer, etc.), “other key roles”, and “overall crew composition (e.g., 30% of the latter must be from underrepresented groups); the third for “industry access and opportunities” (fellowships and internships for minorities as well as special training opportunities for those from underrepresented groups”; and the fourth set for “audience development” (marketing, publicity, and distribution must involve individuals from “underrepresented racial or ethnic groups”).

Remember, the Best Picture nominees have to fulfill at least two of the four requirements. And some areas, like actors, can be satisfied by meeting a minimal number of standards within the class. For example, here are the standards, as given by Variety, for “On-Screen Representation, Themes, and Narratives”. To meet this one of the four sets of standards, the film must meet one of the following three criteria:

To achieve Standard A, the film must meet ONE of the following criteria:

A1. Lead or significant supporting actors

At least one of the lead actors or significant supporting actors is from an underrepresented racial or ethnic group.

At least 30% of all actors in secondary and more minor roles are from at least two of the following underrepresented groups:

• Women
• Racial or ethnic group
• LGBTQ+
• People with cognitive or physical disabilities, or who are deaf or hard of hearing

The main storyline(s), theme or narrative of the film is centered on an underrepresented group(s).

• Women
• Racial or ethnic group
• LGBTQ+
• People with cognitive or physical disabilities, or who are deaf or hard of hearing

The standards for the other three categories can be seen in the Variety article. These standards were developed by a committee appointed by the Academy.

How will these be enforced? According to the New York Times article, “the standards will be enforced via spots checks of sets and through dialogue between the academy and a movie’s filmmakers and distributors.” For the first category—films—that seems impractical, because how do you know a film will be applying for a Best Picture award when it’s being made? And after it’s made, there are no more sets, though I suppose the ethnicity of actors will be available.

When I first read this, I assume that all four areas would have to meet the standards, and I was distressed—as were a few readers who sent links to me—that pictures would have to fit a given mold of diversity. For surely there are some movies that simply can’t meet these standards, like those portraying times or situations when there were no minorities around. Those movies wouldn’t get a chance to be nominated, no matter how good they were. But then I read the standards and realized that you don’t have to fulfill the criteria for actors, but can do so by meeting two out of the other three categories. And I don’t have any problems with those standards. Then I thought, “Well, just leave out category A and ask that movies meet two out of the three remaining standards,” but then then narrows the possibilities for minority actors; so I think it should stay.

Thus, despite the superficial appearance of a draconian and authoritarian change in movies in the name of diversity, the initiative looks pretty reasonable to me. But other people should weigh in.