Bruce Lyon, evolutionary ecologist at the University of California at Santa Cruz, is back with his felicitous mix of travel photography, animal photography, and natural history. I’ve indented his captions.

Here is another installment of photos from my December trip to Argentina (previous posts here and here). Today there are more photos and stories from the high elevation (4500 meter) Vilama-Pululos site we visited near the Bolivian border. This region has several high-elevation lakes with the coots we were seeking, but lots of other interesting wildlife as well. In this installment I will focus on an interesting high elevation bog habitat.

Below. My Argentinian colleagues Alejandro Pietrek and Enrique Derlindati hiking through the austere and beautiful habitat en route to a lake we checked for coots. 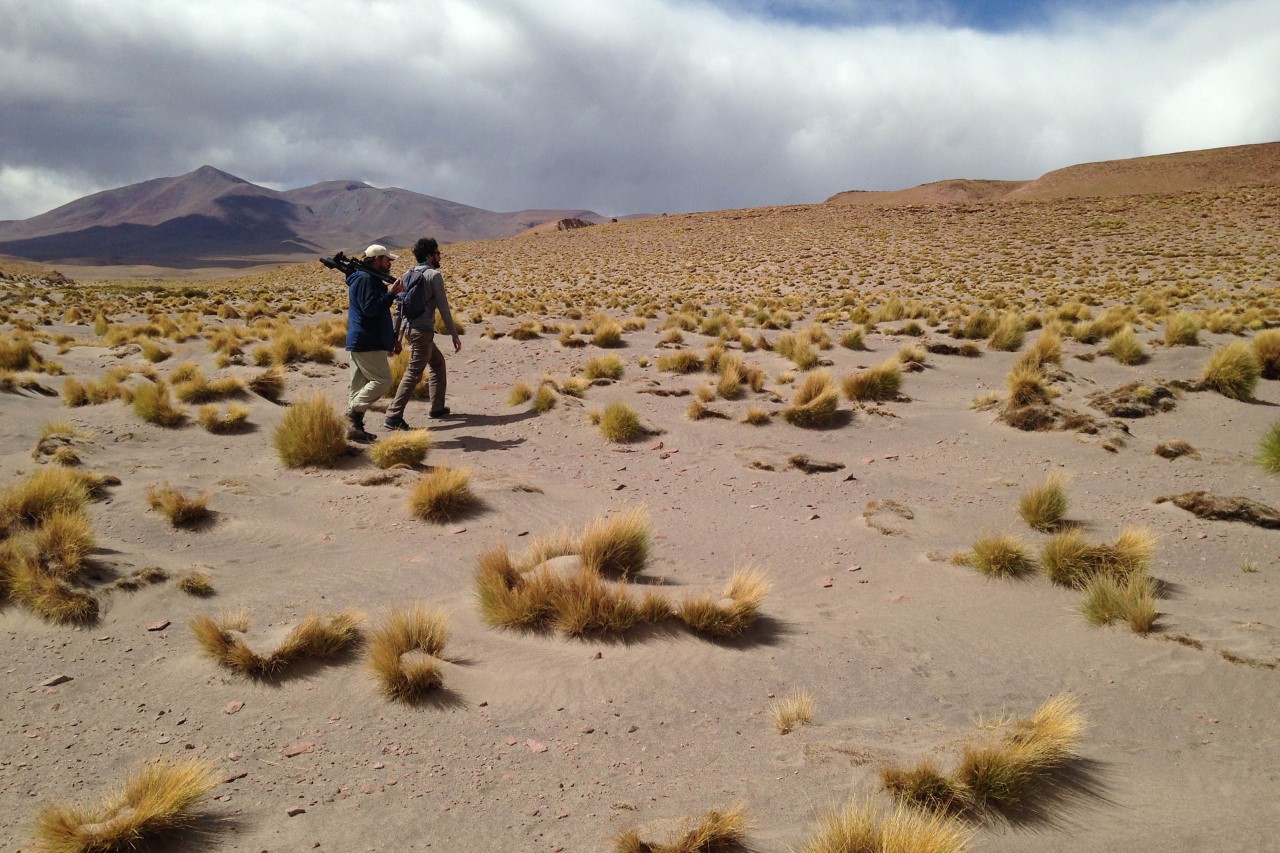 Below: The little tin refugio (silver hut) served as our lodging for the four days we were in the area conducting surveys. The refugio is for use by the park rangers while working in this remote area and my colleagues got permission for us to stay there. We got lost on the first night: we arrived after dark and could not find the hut so we had to camp. It was not the most comfortable night and this made us extra appreciative of having a cozy shelter for escaping the elements, cooking nice warm meals, and sleeping in comfort. 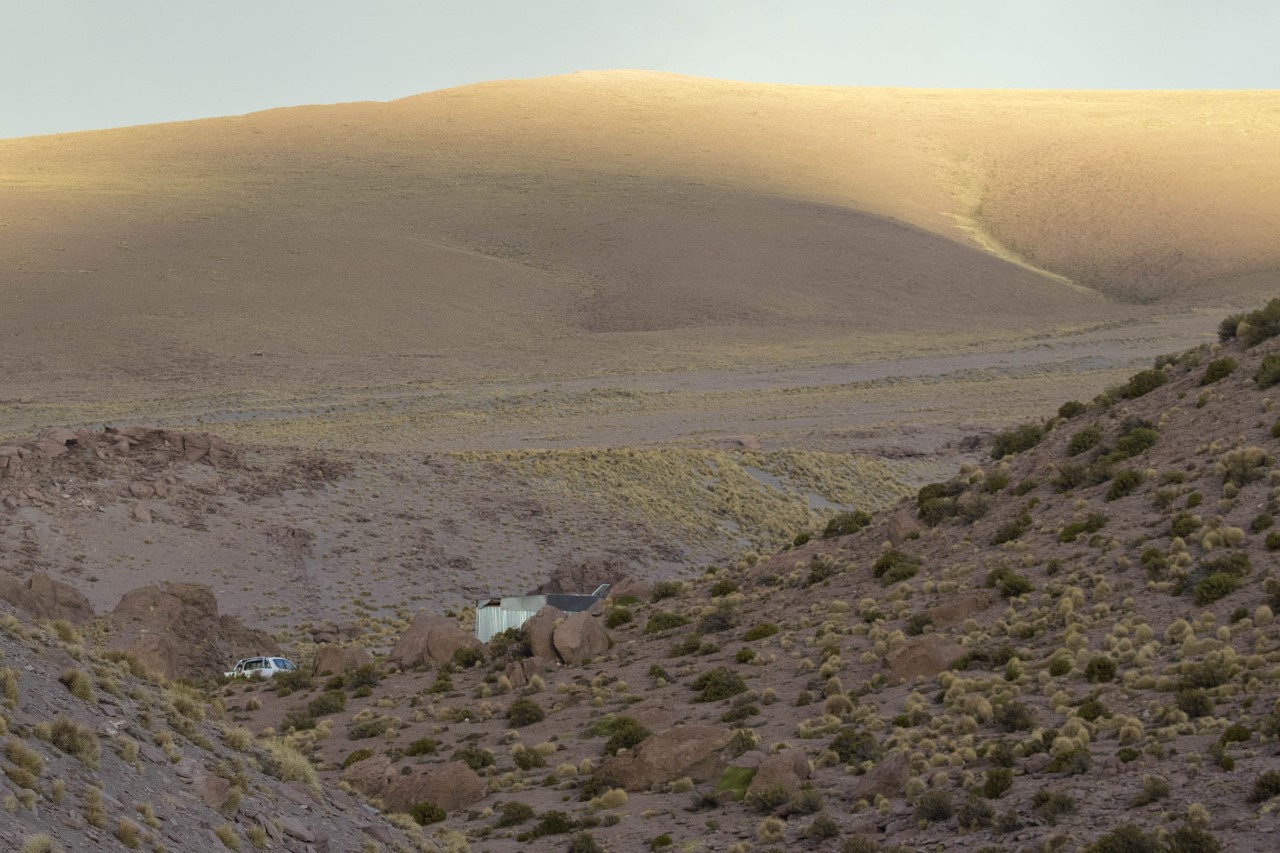 Below: A closeup of the refugio: 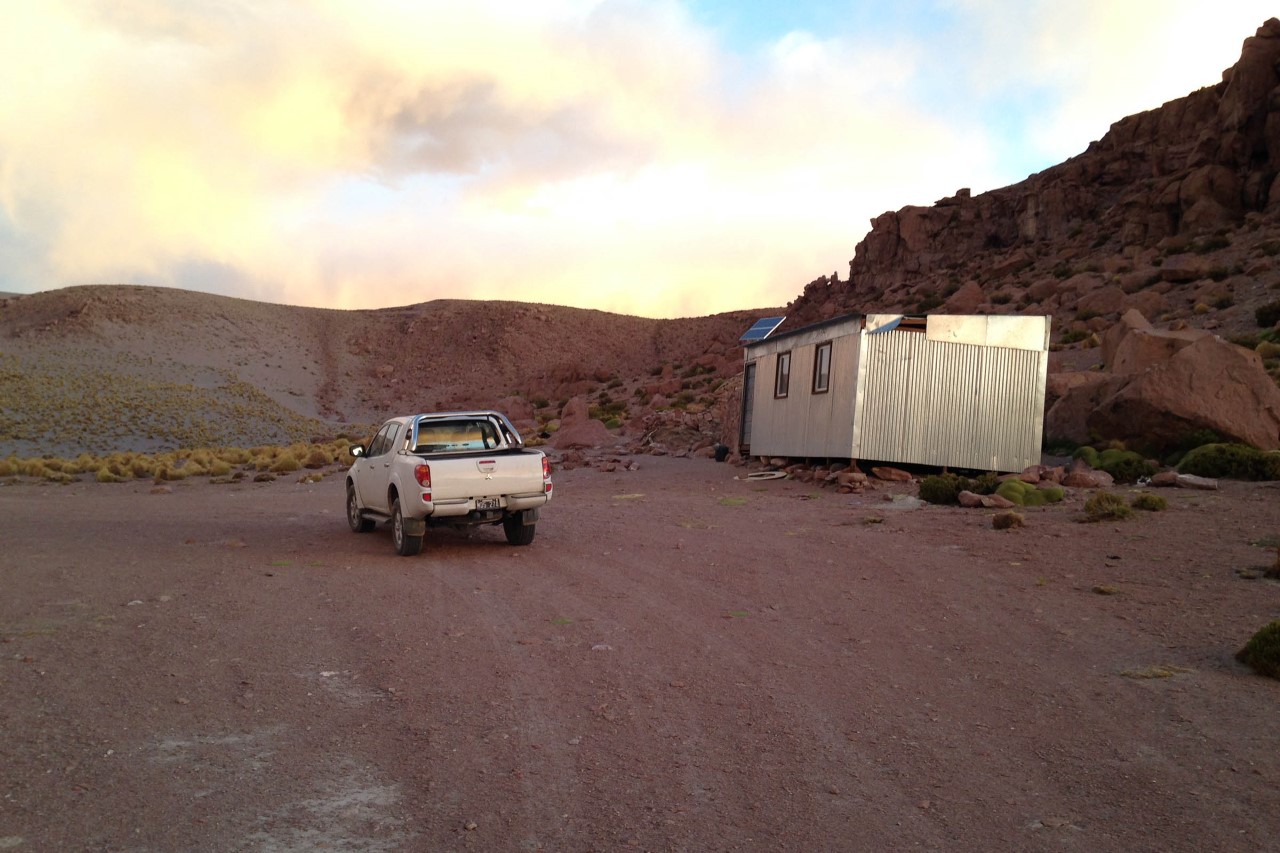 Below: A highlight of the entire trip were the abundant high elevation bogs, called vegas in Argentina and bofedales in Peru and Chile. These bogs result from the water that seeps out of the sides of the surrounding mountains and then flows downhill to feed into the lakes, which depend on these bogs for their water. In some places the water flows quickly, forming creeks, while in other areas it moves slowly and forms the large spongy bogs. The region in general is very dry, so these bogs are magnets for wildlife. 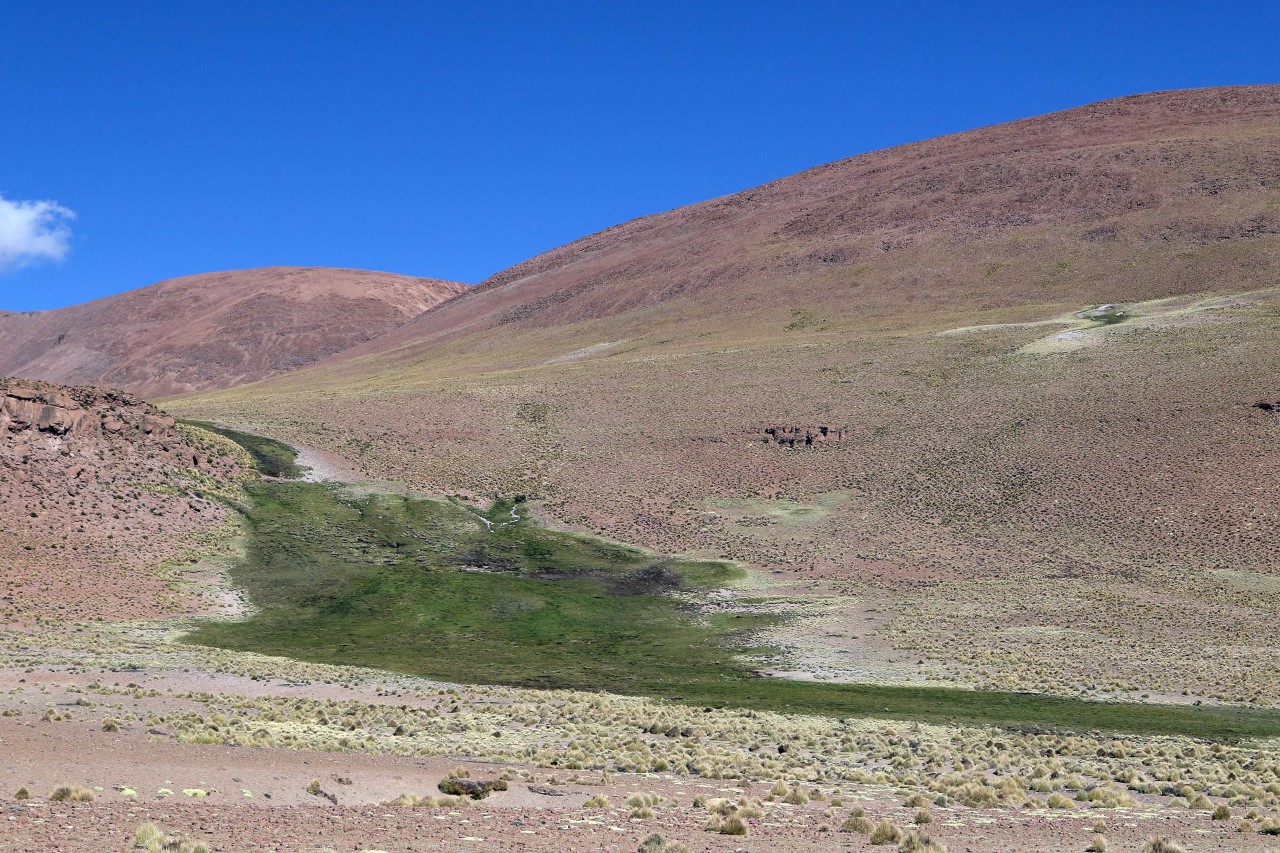 Below: A screen shot from Google Earth showing a couple of the lakes we studied and, importantly, the bogs that feed into the lakes.  The bogs are the blackish-green stripes in the image above the two dark blue lakes. 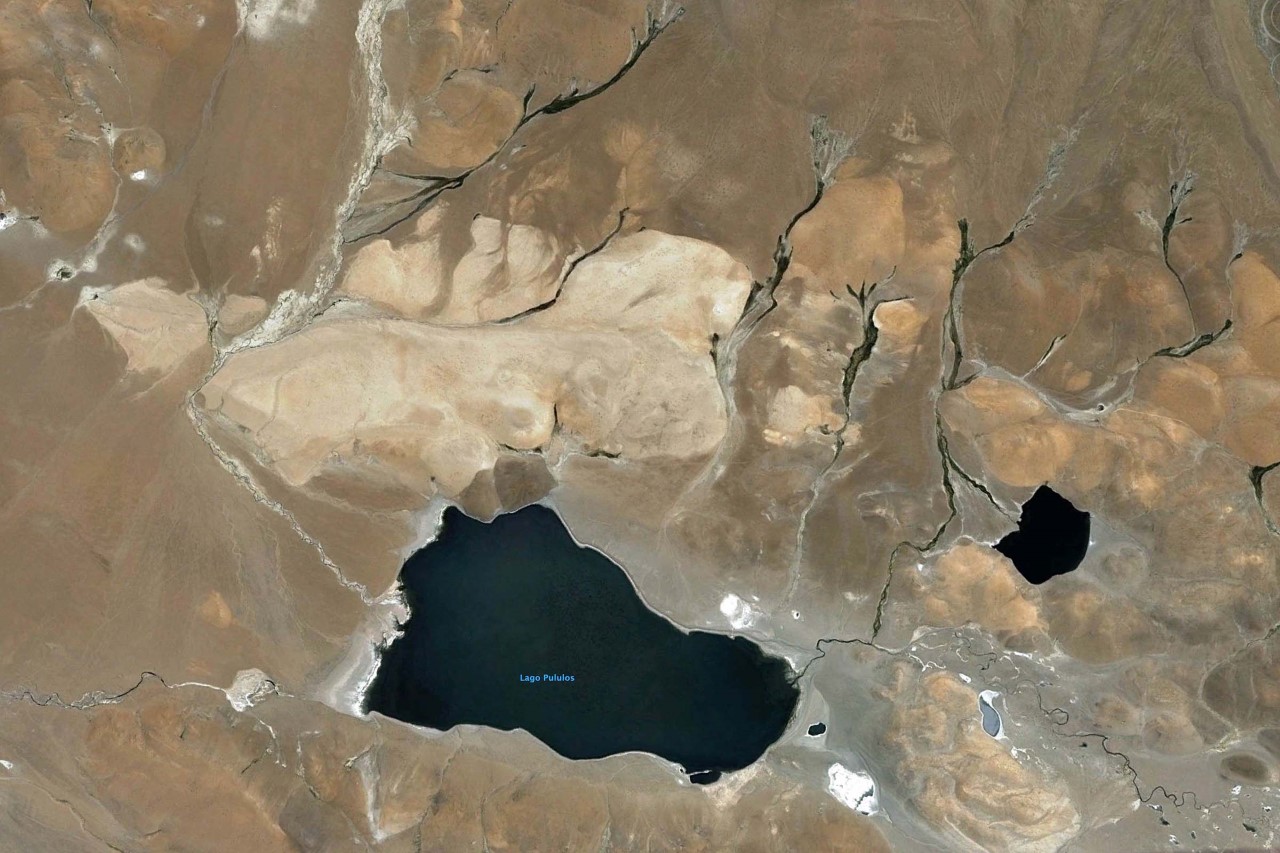 Below: A closeup of a bog showing the mosaic of vegetation and water. Although the bogs were spongy in terms of vegetation itself being damp in many places, the dominant green plant was quite hard and somewhat prickly. 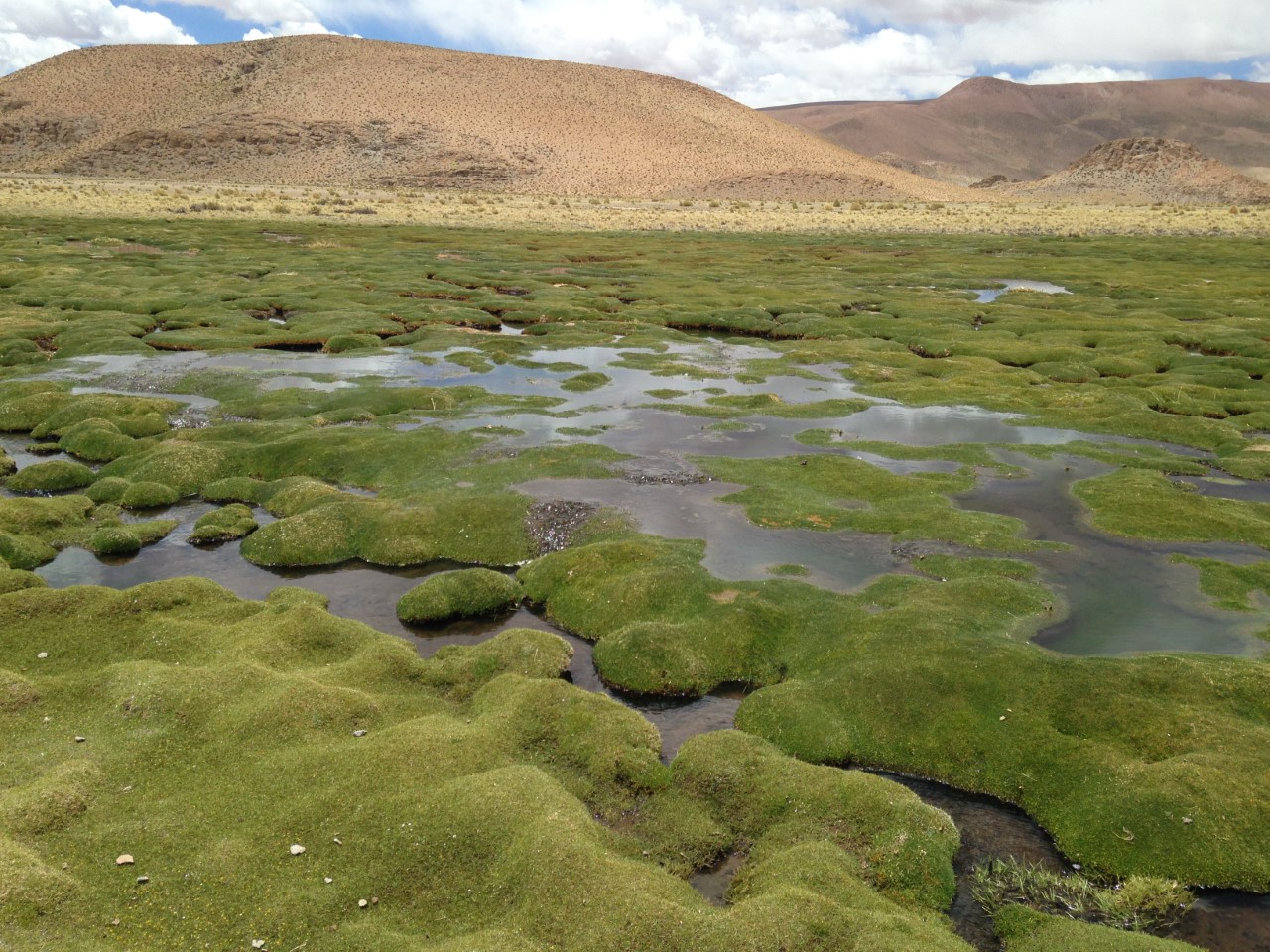 Below: A fabulous find—the diademed sandpiper-plover (Phegornis mitchellii). This unusual shorebird is only found on these high-elevation bogs in southern South America (Chile, Peru, Bolivia, Argentina). It is a much sought-after species by birders, but is often missed, so we felt fortunate to find the bird on three different bogs.  Despite features that make this bird sandpiper-like (e.g., the beak) it is actually a plover. It is poorly studied and not much is known about it. 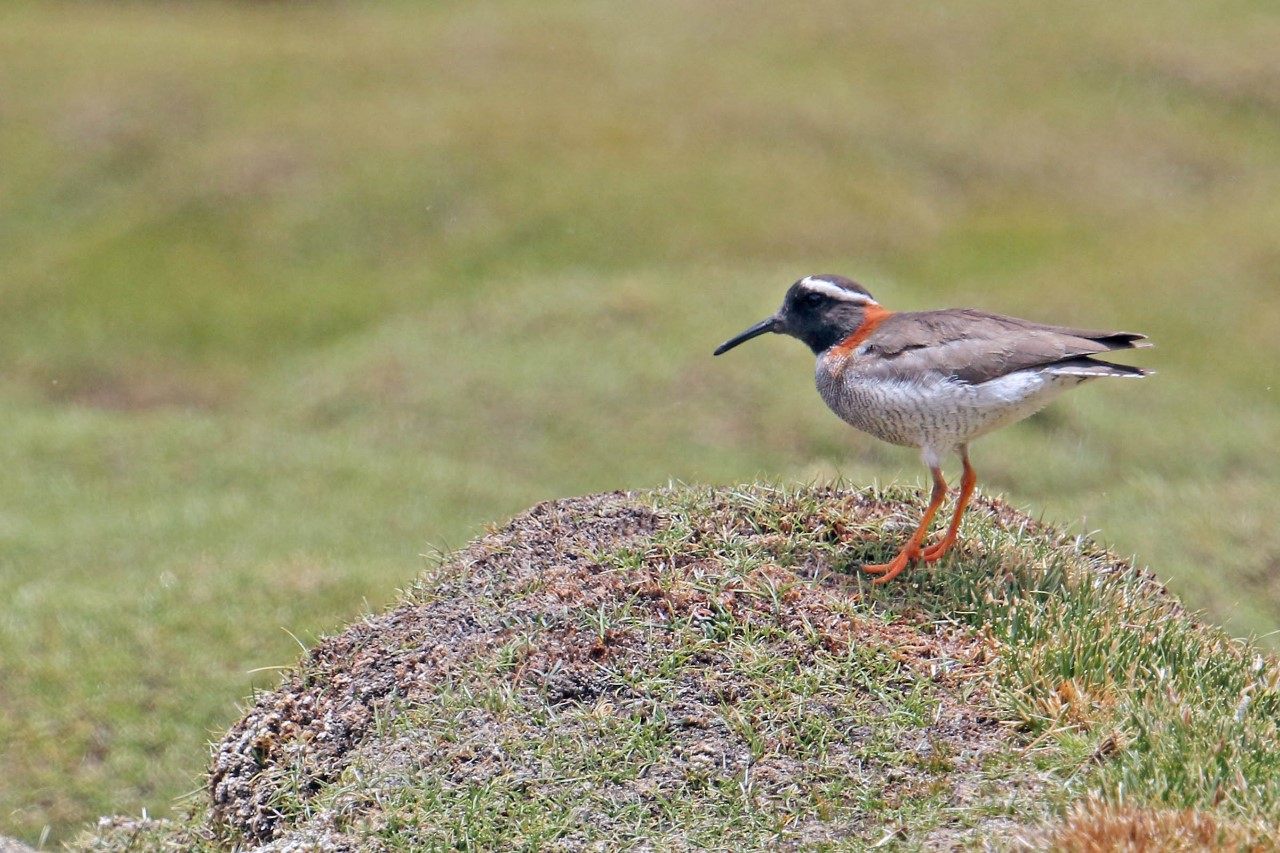 Below: We encountered a pair of sandpiper-plovers that acted like they had a nest (calling, flying about, seemingly trying to lure us away from an area). The birds were right beside the road so we were able to watch them from inside the truck to see if they would return to their nest (vehicles make great observation blinds). It turned out that they did not have a nest but had chicks out of the nest! Enrique suddenly shouted out that he had spotted a chick running around near one of the parents. It was tiny and we suspect only a couple of days old. Eventually we spotted a second chick. From the little information available for the species, it seems that the clutch size is typically two eggs. 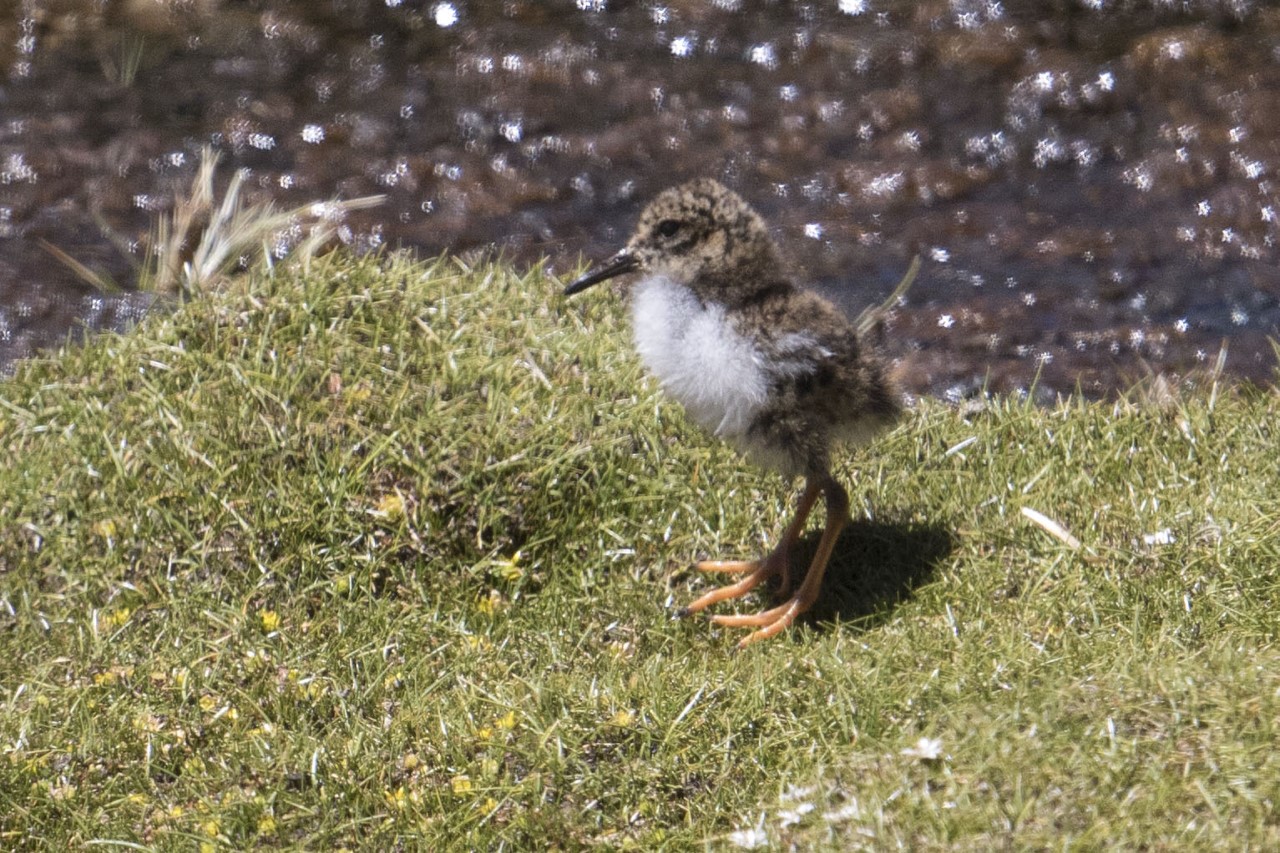 Below: There were several species of waterfowl that fed or gathered on the bogs, including the crested ducks (Lophonetta specularioides) shown here. 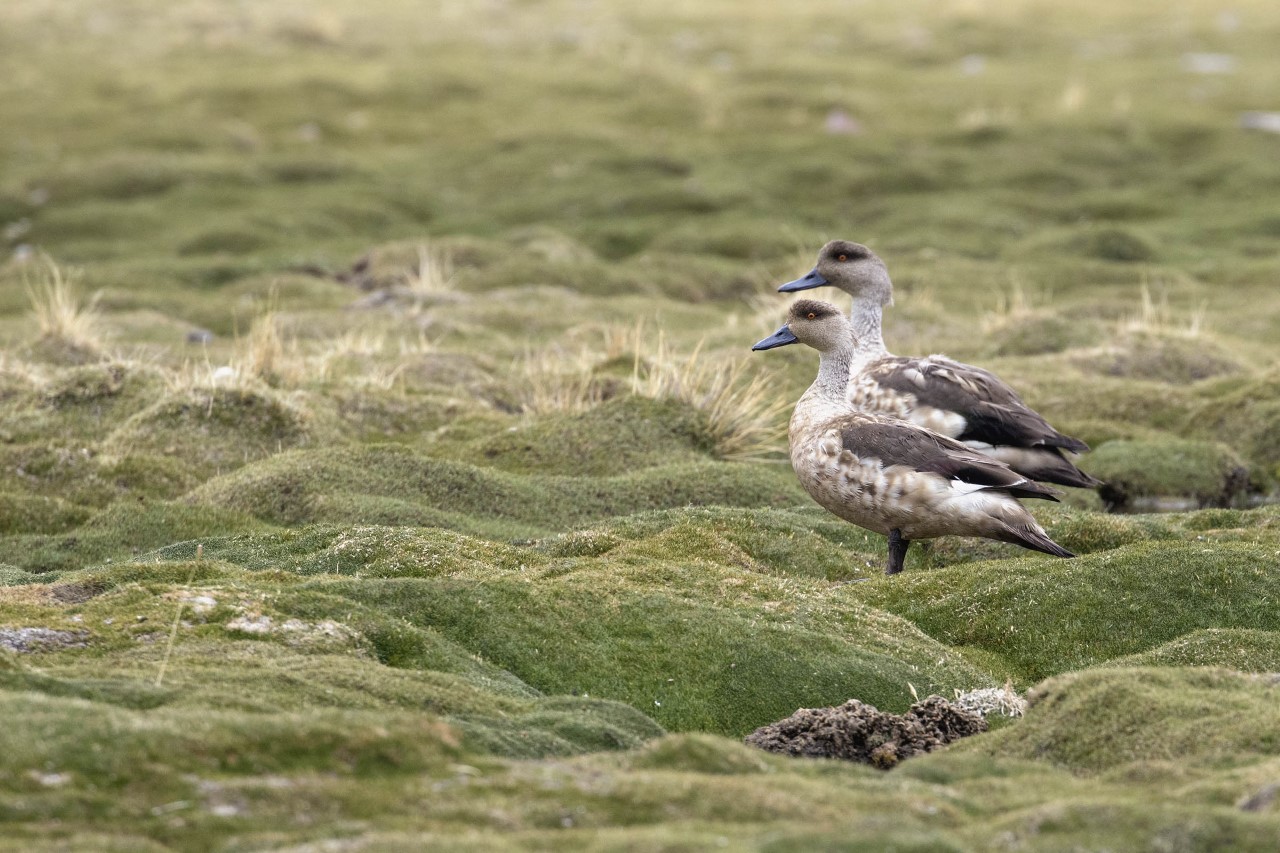 Below. Also common on the bogs were a couple of species of seedsnipes, including this rufous-bellied seedsnipe (Attagis gayi). Although seedsnipes resemble a grouse or a ptarmigan, both in shape and plumage, they are in the order Charadriiformes, which includes gulls, shorebirds and related waterbirds. Breeding season was underway because many male seedsnipes were displaying from little knolls at the edge of the bog. 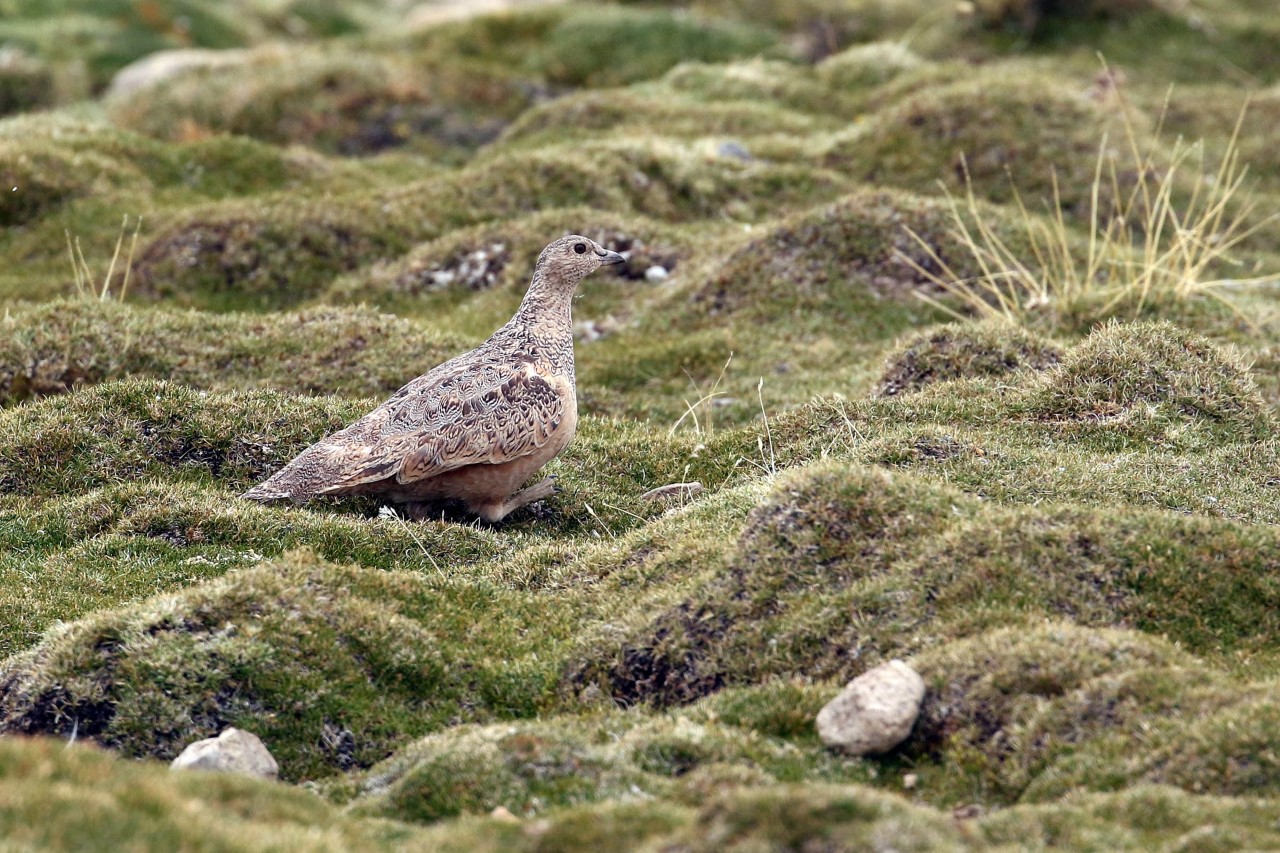 Below: Three species of ground-tyrants—ground-loving flycatchers—were abundant. This is a rufous-naped ground-tyrant (Muscisaxicola rufivertex). Ground tyrants spend most of their time foraging on the ground and have an unusually upright posture for a flycatcher, presumably something to do with being so terrestrial. Like most of the birds in the high Andes, these flycatchers have not been studied very much. I spent a bit of time watching them to get a sense of their basic natural history and was struck by how feisty they are—they spent a lot of time fighting and chasing each other even though they did not seem to be territorial. Perhaps it was mating season. Or perhaps maybe they were just being flycatchers —the ‘tyrant’ in the name tyrant flycatchers (all New World flycatchers are tyrant flycatchers) reflects the aggressiveness of flycatchers generally. 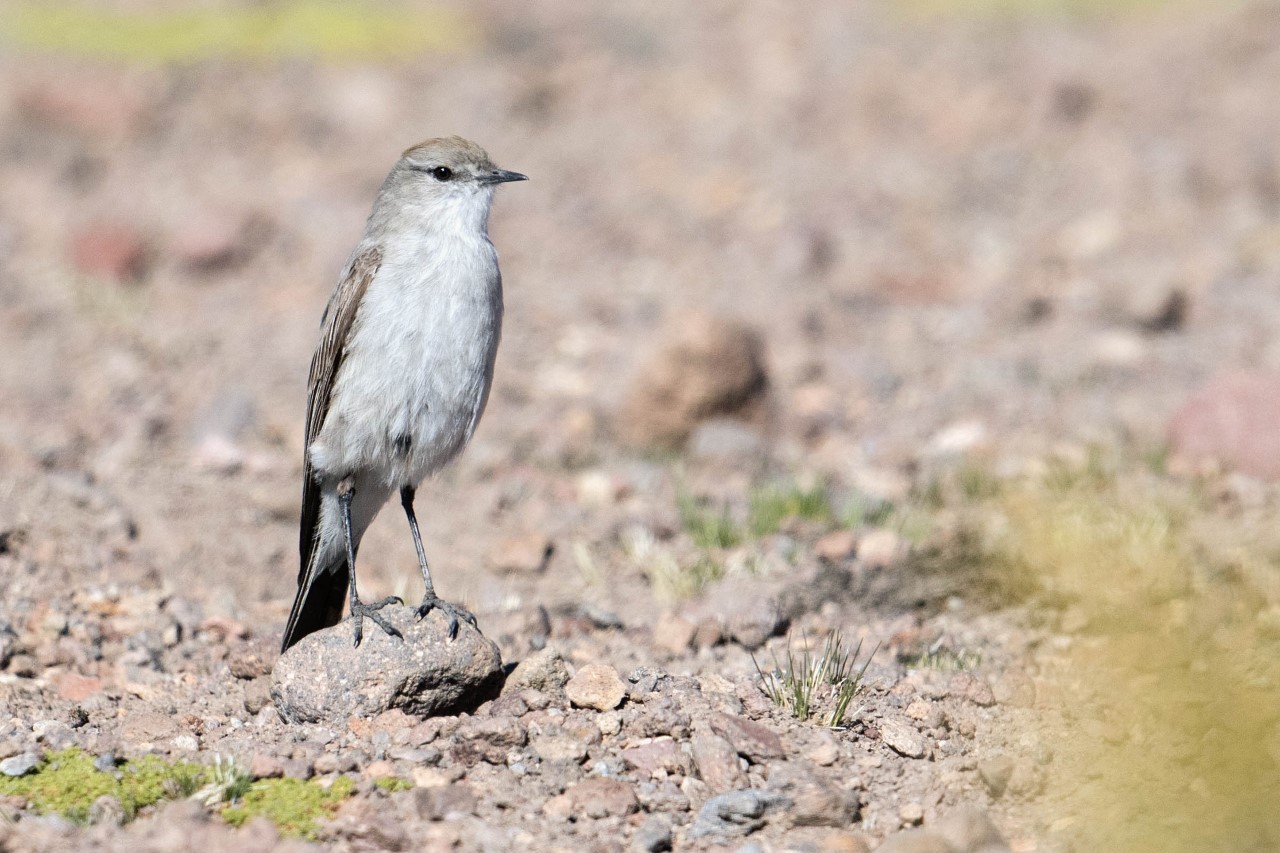 Below: My favorite inhabitant of the bogs was not a bird but a very charismatic mammal. Riddle: What do you get when you cross a rabbit and a kangaroo? It would probably look something like a southern viscacha (Lagidium viscacia), a large rodent that hops like a kangaroo and has ears like a bunny. These guys live in rocky areas (den in rock cavities) but feed out on the open bogs, grazing on the vegetation. They have small litters (one or two) of ‘preococial’ babies—that is, babies born cute and fluffy with eyes open and fully able to run around, unlike the naked, pink and helpless babies of other rodents like mice. Viscachas belong to the Histricomorpha taxonomic group of rodents that includes capybara, guinea pigs, chinchillas, all of which also have precocial babies. 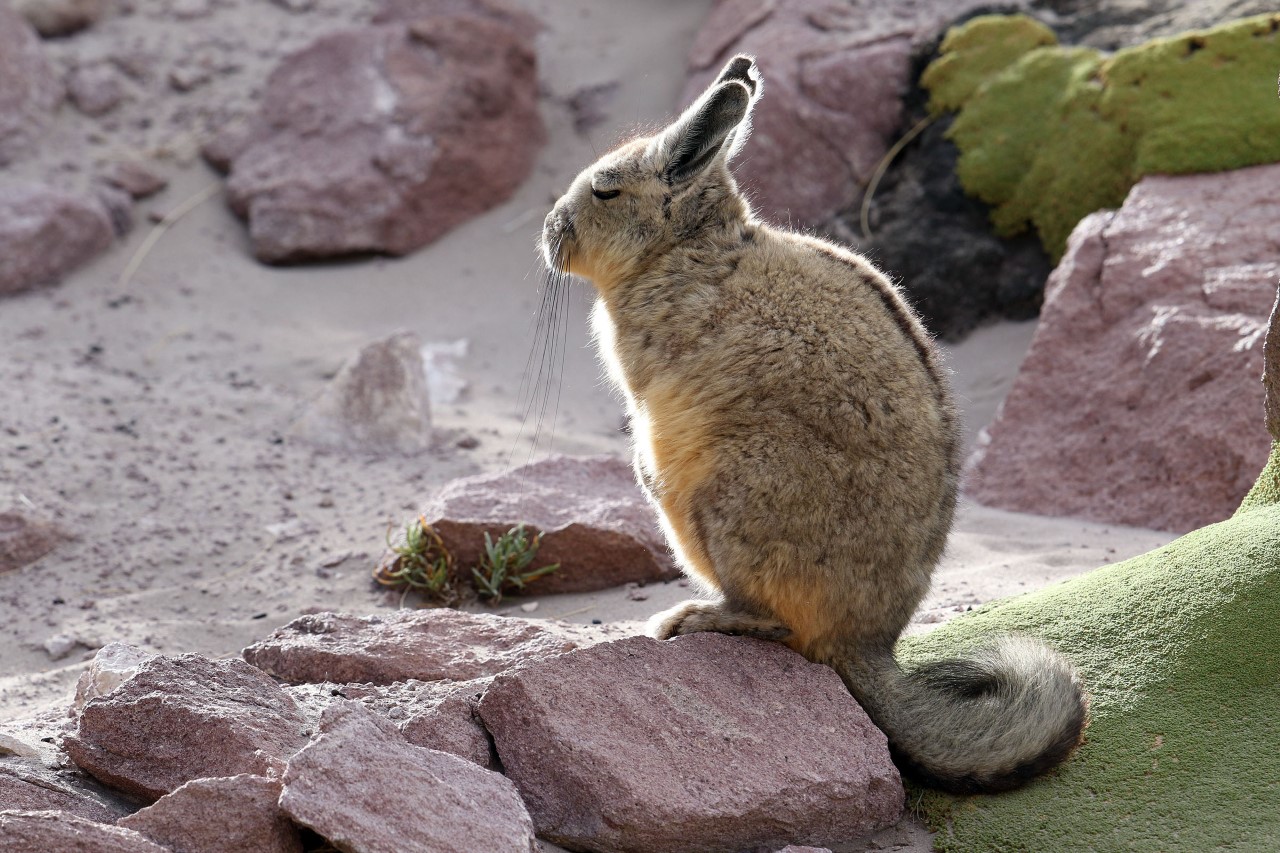 Below: A group of three viscachas grazing on the bog. Viscachas are social and live in colonies—when you encounter viscachas you typically find a bunch of them. 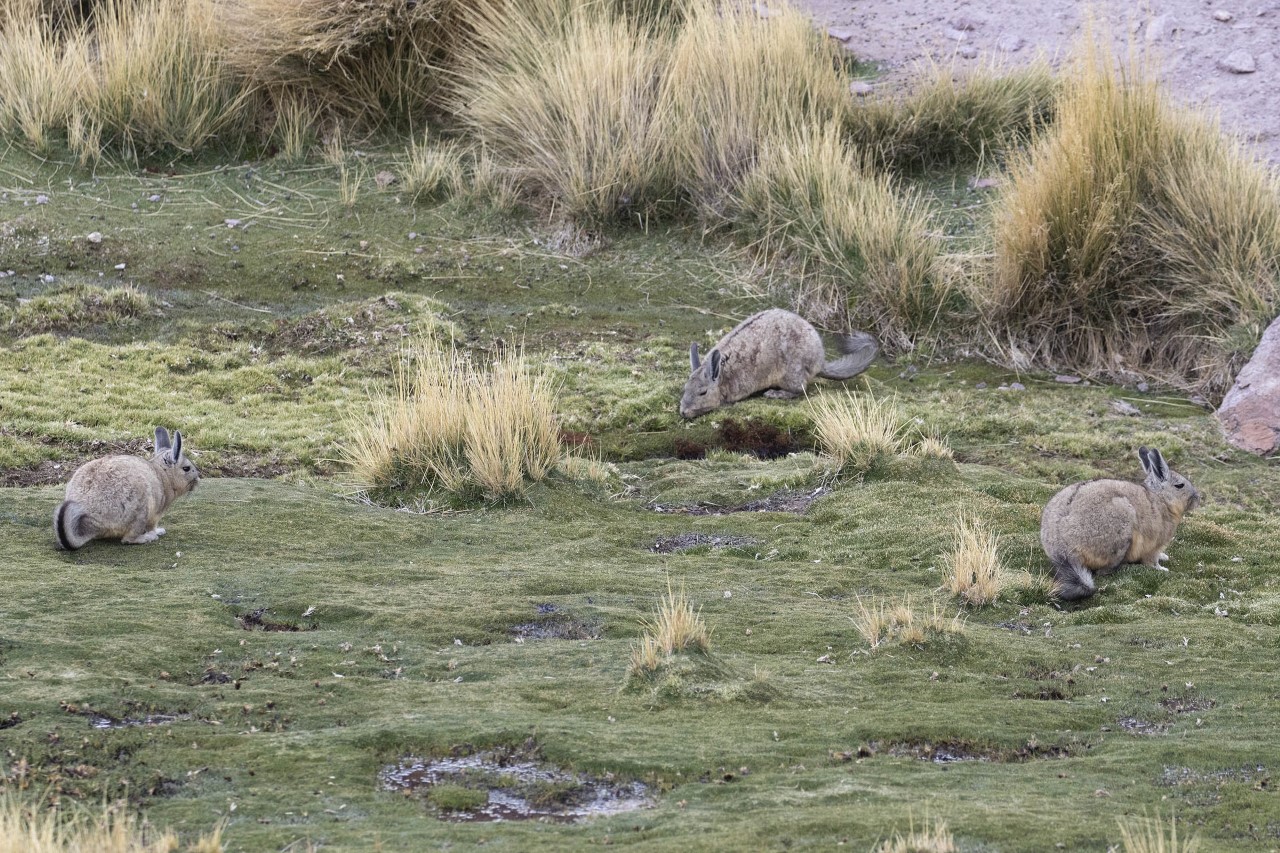 Below: Viscachas appear calm and docile but when frightened they can move very quickly and are amazing at running up steep rock faces and even cliffs, Parkour style. Apparently, their major predator is the Andean mountain cat (Leopardus jacobita), so their speed and agility in escaping makes sense. 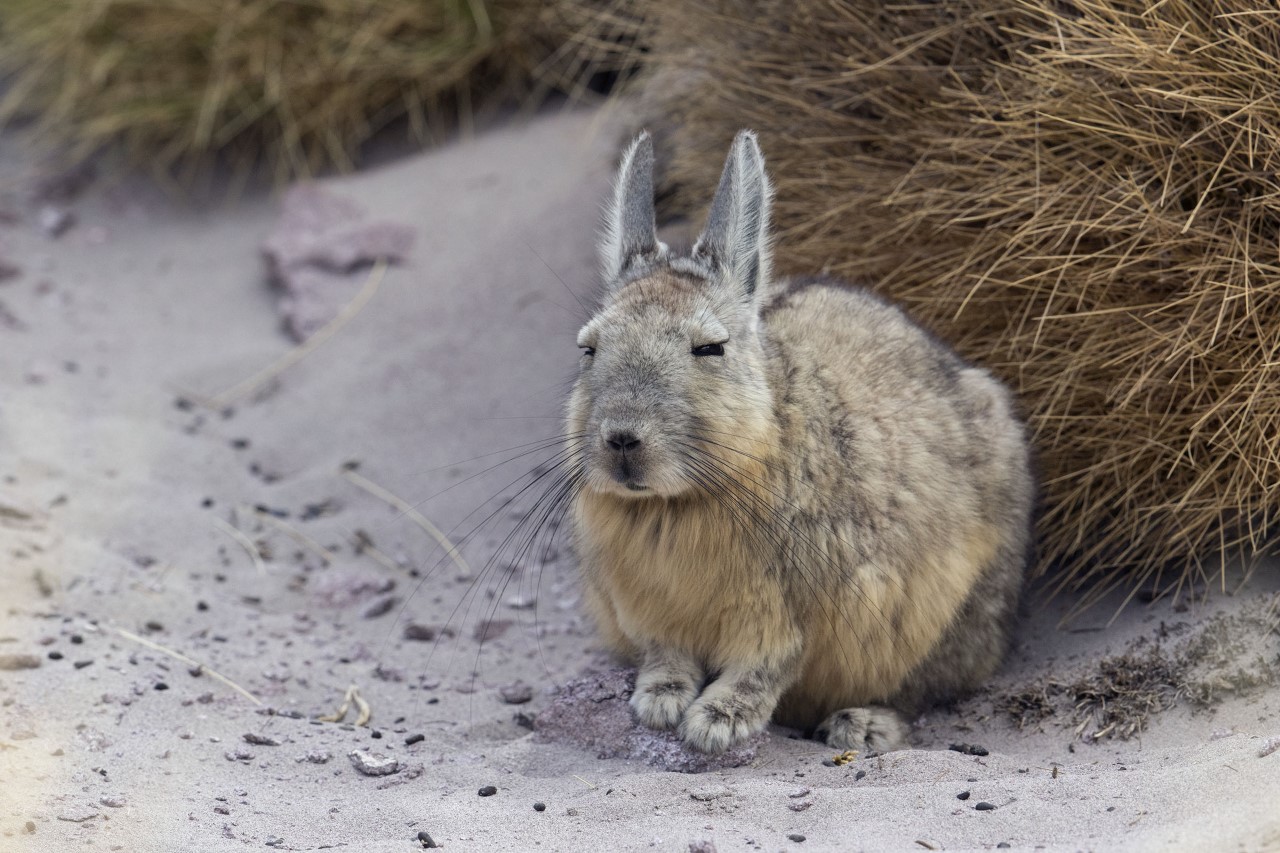 Below: One last viscacha image, because they are so adorable. 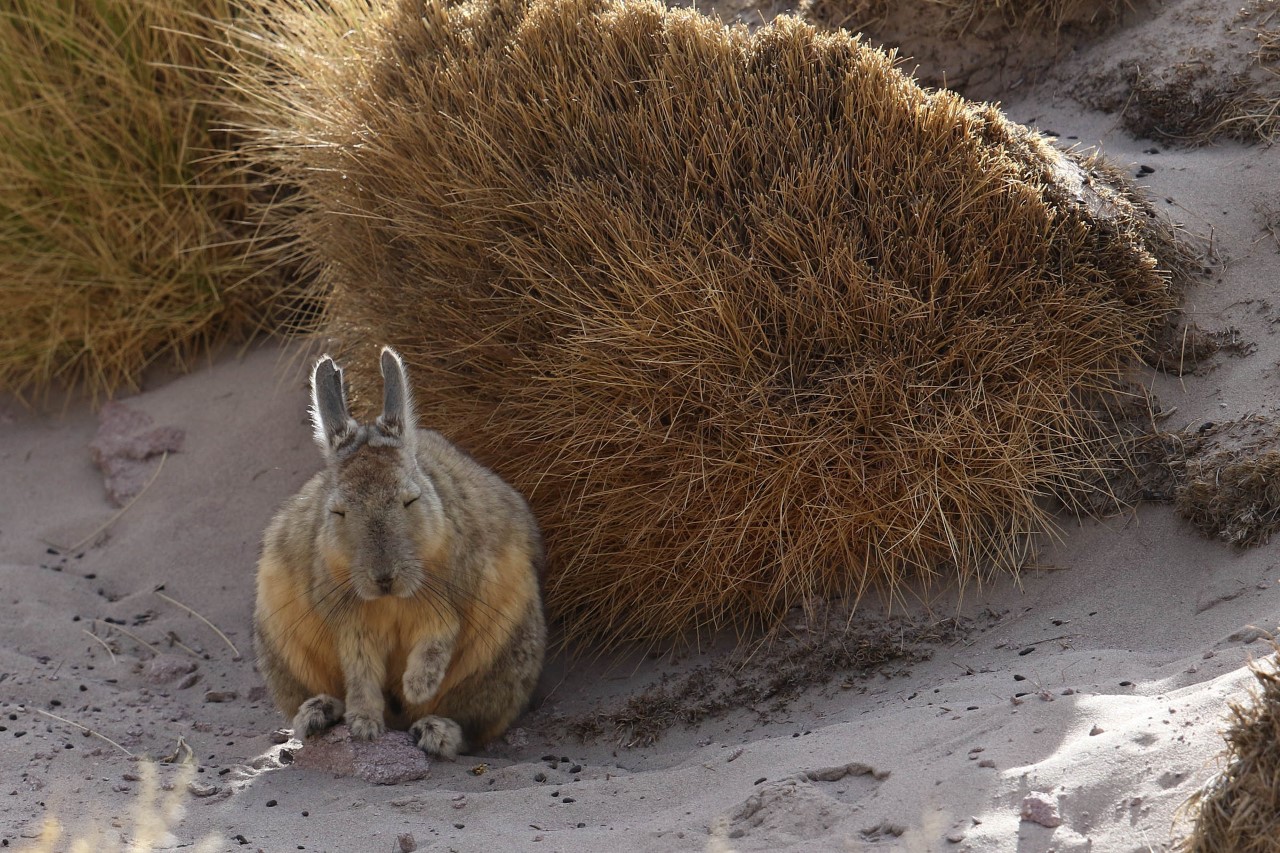 Below: Last and least, a small mouse that I have not yet been able to identify. I saw a few of these running about the nooks and crannies of the bogs. 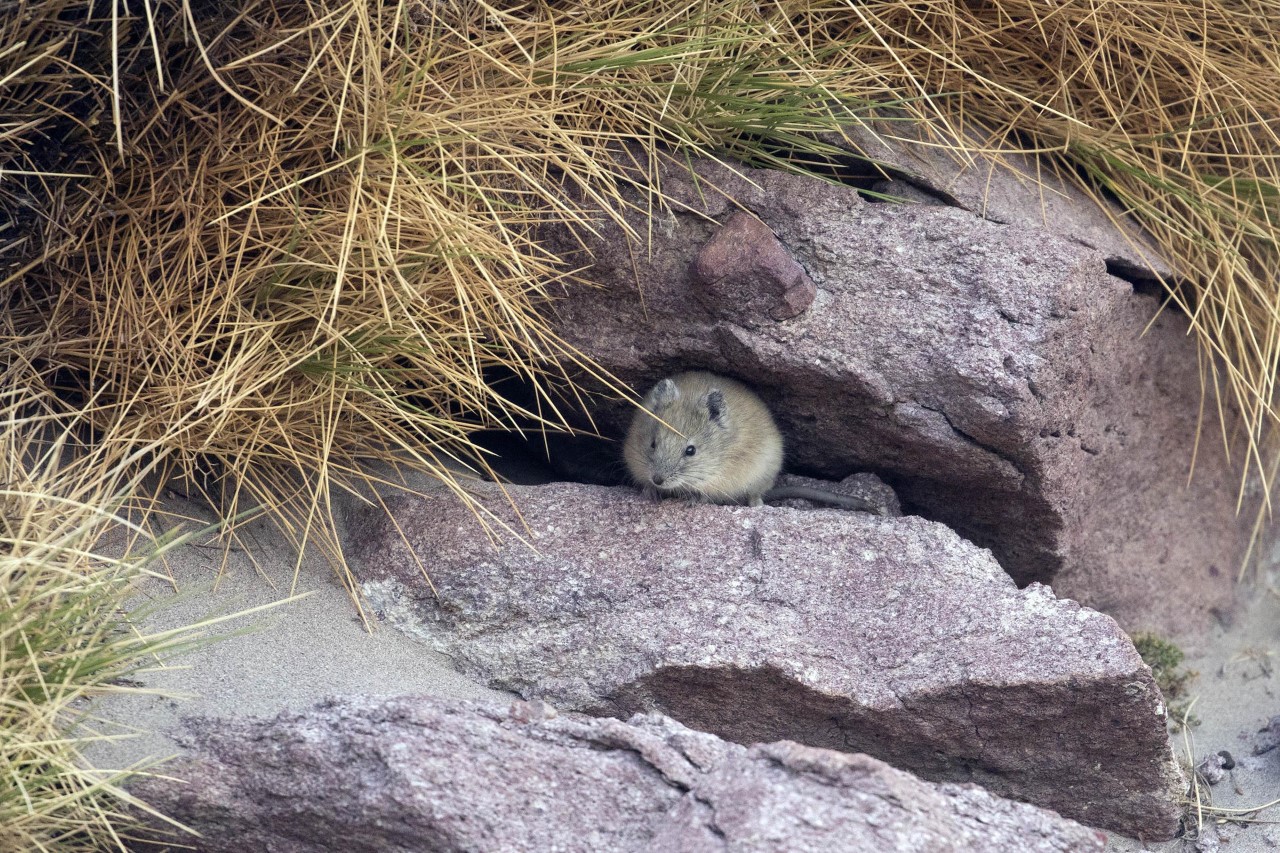