On February 26 I took a poll, which of course was neither scientific nor unbiased. But I asked the following question and got the answers below: 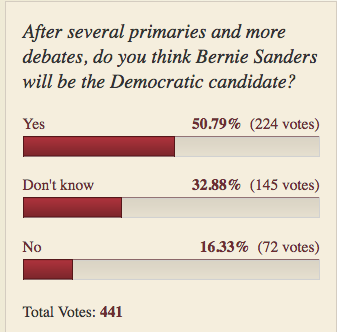 Readers gave Sanders a bare majority of “yes”s, though, as usual, I would have liked to see more votes (you get another chance below).

How quickly things turn in this election cycle! First Sanders won Nevada and Iowa, and the media declared that he was unstoppable. Uncle Joe, however, was playing the long game: waiting until the South Carolina primary and Super Tuesday. And, sure enough, Biden pretty much cleaned up in South Carolina and yesterday, appearing to take ten states, including Texas, where it was a tossup (the Biden states were Alabama, Arkansas, Maine [a surprise to me], Massachusetts, Minnesota, North Carolina, Oklahoma, Tennessee, Texas, and Virginia). Sanders won Colorado, Vermont, Utah, and (probably) California.  Here’s the New York Times summary:

Warren won bupkes, and, with only 50 delegates, she’s pretty much out, though she’s going to keep the Democratic party divided right up to the convention (another reason I am not keen on her). She couldn’t even win her home state of Massachusetts, finishing a distant third behind front-runner Biden and second-place Sanders.  Here are the results from Massachusetts, where Biden didn’t even campaign).  I’m quite surprised. After all, she’s their senator! 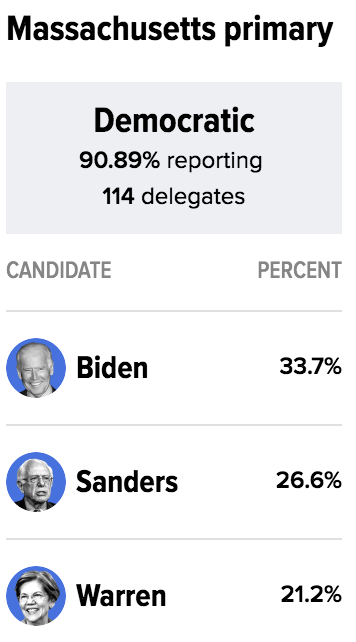 Another surprise for me was Texas, since it’s heavily Hispanic and, in general, Hispanics tend to go for Bernie.

Finally, it appears that Sanders will take California, the most delegate-rich state; but that still doesn’t put him ahead of Biden in terms of delegates committed so far, which I show below (this is the latest total I have).  Tulsi Gabbard is the only other candidate who has more than zero delegates: she has one. You need 1,991 delegates to gain a majority and ensure a relatively uncontested convention:

“Mayor Pete has to demonstrate over the course of a campaign that he can excite and motivate arguably the most important constituents in the Democratic Party: African Americans. These voters are a hell of a lot more important than a bunch of 25-year-olds shouting everyone down on Twitter.”

Carville, say what you will of him, is a self-described liberal, and also said this in the interview with Sean Illing:

So your complaint is basically that the party has tacked too far to the left?

They’ve tacked off the damn radar screen. And look, I don’t consider myself a moderate or a centrist. I’m a liberal. But not everything has to be on the left-right continuum. . . . Look, Bernie Sanders isn’t a Democrat. He’s never been a Democrat. He’s an ideologue. And I’ve been clear about this: If Bernie is the nominee, I’ll vote for him. No question. I’ll take an ideological fanatic over a career criminal any day. But he’s not a Democrat

. . . But back to Sanders — what I’m saying is the Democratic Party isn’t Bernie Sanders, whatever you think about Sanders.

Sure enough, it was the African-Americans who helped ensure Biden’s victory in the South, with a contribution of middle Americans in Minnesota and Oklahoma. I was particularly heartened—I now favor Biden over Sanders, though I guess I’d now prefer Mayor Pete or Klobuchar, or even the moribund Warren, over both of them—that Biden not only won Minnesota, the state that elected Bernie booster and anti-Semite Ilhan Omar, but also won her very own district. Polls showed that Sanders was favored there, but that was before Klobuchar dropped out and endorsed Biden.

As I keep saying, I’ll vote (as will Carville) for whomever the Democrats nominate. But party unity is what’s needed now, and perhaps we’re beginning to see a coalescence around a moderate Democrat. I still think Biden is more likely than Sanders to beat Trump, and that may be reflected in the polls to come. Bernie isn’t going to give in, of course, and apparently Warren won’t, either. I don’t think Biden will make a particularly terrific President, but I also think he’s more likely to pull the Senate and House along with him if he wins. So be it. To each their own.

So Biden is back in the race, though it’s still a horse race with two aging nags running nose to nose. But I’ll give you a chance to not only weigh in below, but to vote again: