Greetings! I have landed, and it’s Wednesday, March 4, 2020: National Poundcake Day. More important, it’s the Day After Super Tuesday, but we’ll have a place to discuss the surprising election results in an hour or so. Please hold any comments until then.

In the meantime, it will take me a day or so to recover from jet lag, so posting may be light. As always, I do my best.

My flight back was uneventful: a bit over nine hours long, and I didn’t get groped by French security. Even though I was tired all day, having risen at 4 a.m., I decided not to even try to sleep on the plane so I could crash at my regular bedtime in Chicago. I passed the time by watching several movies, to wit:

“Judy“, starring Renee Zellweger as Judy Garland, portraying the last few weeks of her life (she died in 1969 at 47) as she tried to climb out of insolvency with a series of shows in London. There are also flashbacks to a teenage Judy being instructed by Louis B. Mayer and bullied by her mother.  (I watched the first half on the way to France, but was interrupted by landing). It was a very good film with an excellent performance, and I was surprised at how well Zellweger could sing (I assume the vocal were hers.) It didn’t excite me, however, as much as did “The Irishman” and “Parasite”.

“Remember My Name: David Crosby”.  A surprisingly engrossing documentary about a famous (and now old and sick) rock musician. Produced by Cameron Crowe, it follows Crosby around on tour and especially around his stomping grounds in Southern California as he retraces his steps, visiting the places associated with his bands The Byrds and Crosby Stills & Nash (and Young). Its appeal may be limited to those of us who remember those great bands, but it’s also a portrait of a man riven with self-loathing, who knows he hurt many people during a bumpy life (he lost his longtime girlfriend Christine Hinton in a car accident, was addicted to heroin and other drugs, and spent six months in a Texas state prison). He reports with great sadness that none of the people with whom he ever made music will speak to him now. Finally, suffering from multiple health problems (diabetes, multiple heart attacks, 8 stents in his heart, hepatitis-C, and a transplanted liver), he wonders why he’s still alive, and realizes that the end is likely near. His wife Jan also admits that she will be left alone, and wonders how she’ll survive. Despite everything, he continues to make music, touring frequently despite the toll on his health.

I see that the movie has a 92 Critics Rating on Rotten Tomatoes. 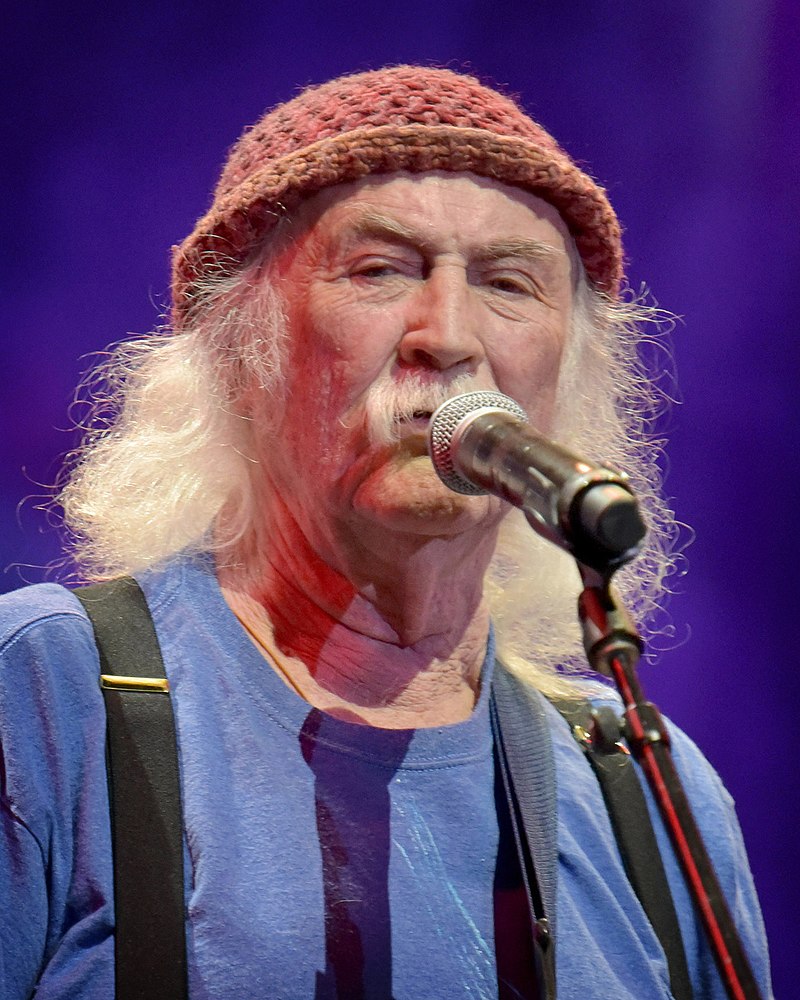 “Saving Private Ryan”. I watched this 1998 movie because I ran out of movies I wanted to see. I originally just wanted to watch the initial D-Day landing scene because, from what I know of the invasion, it was the most accurate (and of course gory) visual account of what the soldiers encountered on the beach. And indeed, it was horrifying, but that just drew me in to watch the rest of the film. It was, I thought, a palpably better movie than the highly touted 1917, and was nominated for 11 Academy Awards, winning five: Best Cinematography, Best Sound, Best Sound Effects Editing, Best Film Editing, and Best Director for Spielberg;

“Hustlers”. Many people thought this film deserved to be nominated for both Best Picture and Best Actress (Jennifer Lopez), but I found it formulaic and boring, and Lopez’s performance as the tough but tender-hearted stripper was good but didn’t blow me away. As I recall, the film was also touted for its empowerment of women, but that empowerment consisted of a bunch of strippers drugging and fleecing Wall Street entrepeneurs—in other words, doing for money what Bill Cosby did for sex. It was watchable, and better than most new films, but I can’t extol it.

“Ratatouille”. I wanted to like this Pixar/Walt Disney film about a rat who aspires to be a chef (after all, I love Pixar and it was about food), but I got bored and read old issues of New Yorker instead.

I’ve seen six of the films nominated for the Best Film Oscar this year, and still think that “The Irishman” was the best, though Parasite was close behind and, although the plot of the Korean film was a bit contrived, it was very good and I have no beef with its award.

Finally, fruits of my trip: two goodies acquired in the Paris flea market: a ceramic plate for serving foie gras and a semi-antique silver-plated brass duck plate by the renowned silversmith firm Deschamps Frères, probably made around 1940: 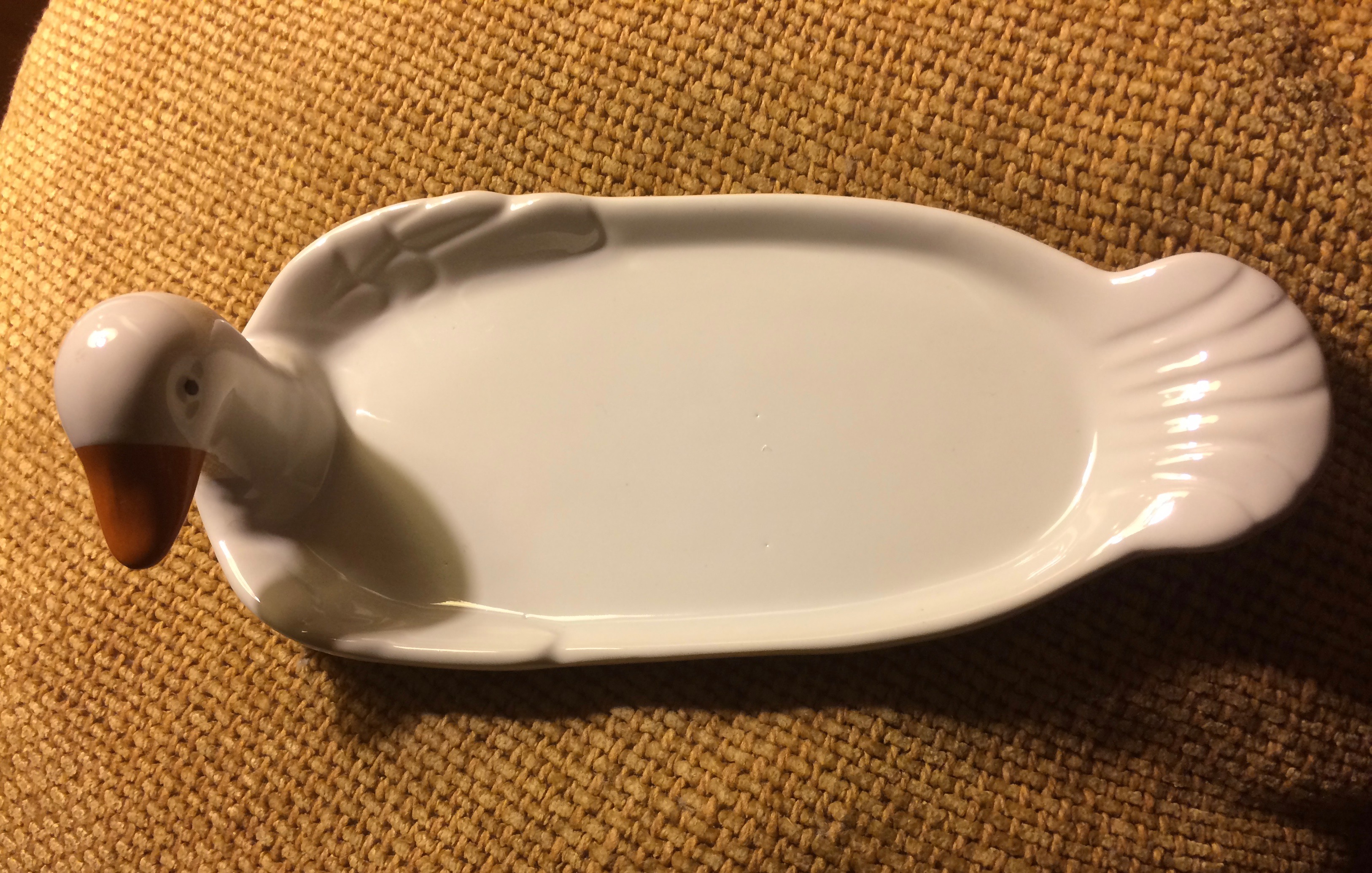 I may get this dish replated: 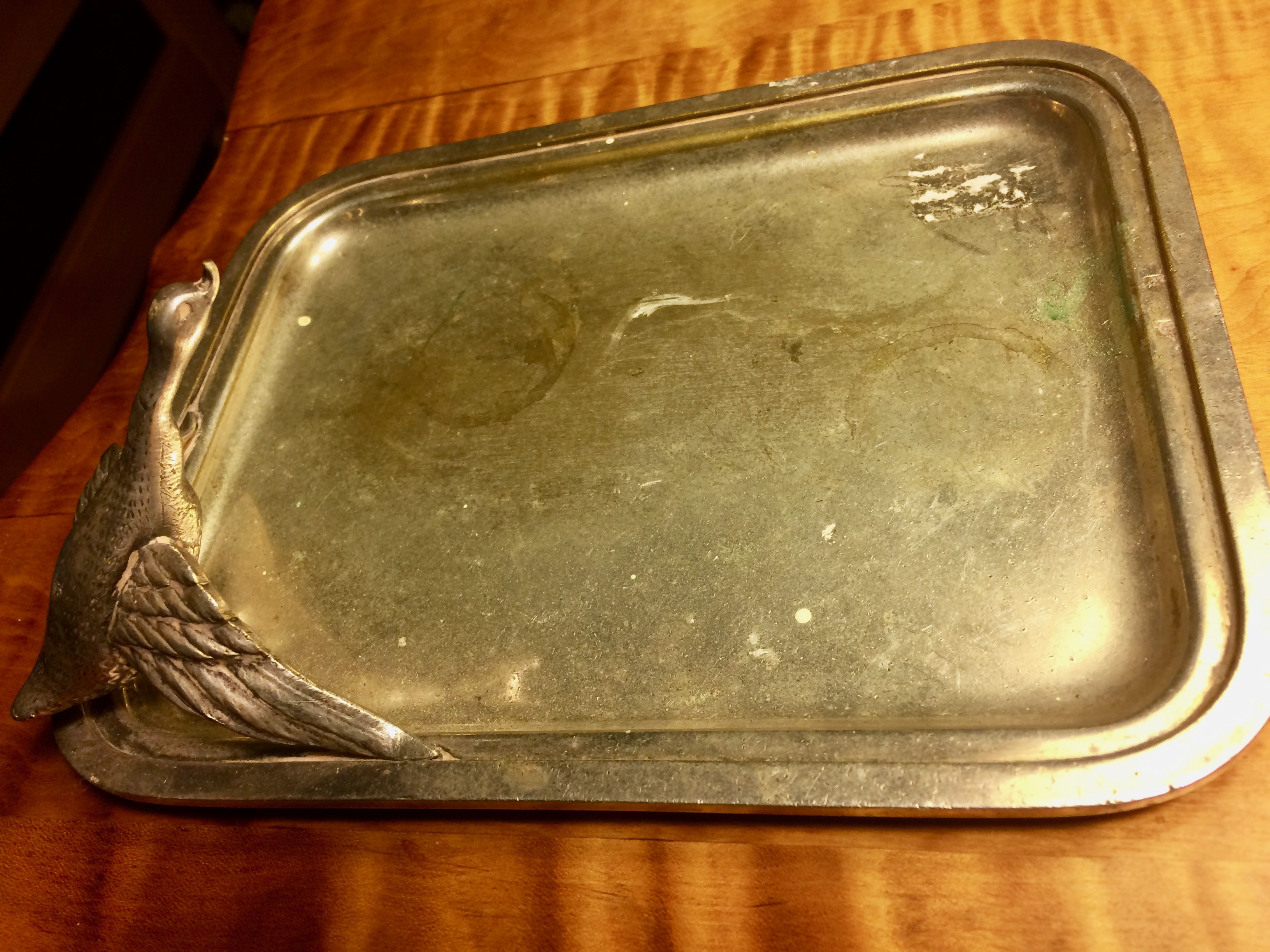 A closeup of le canard: 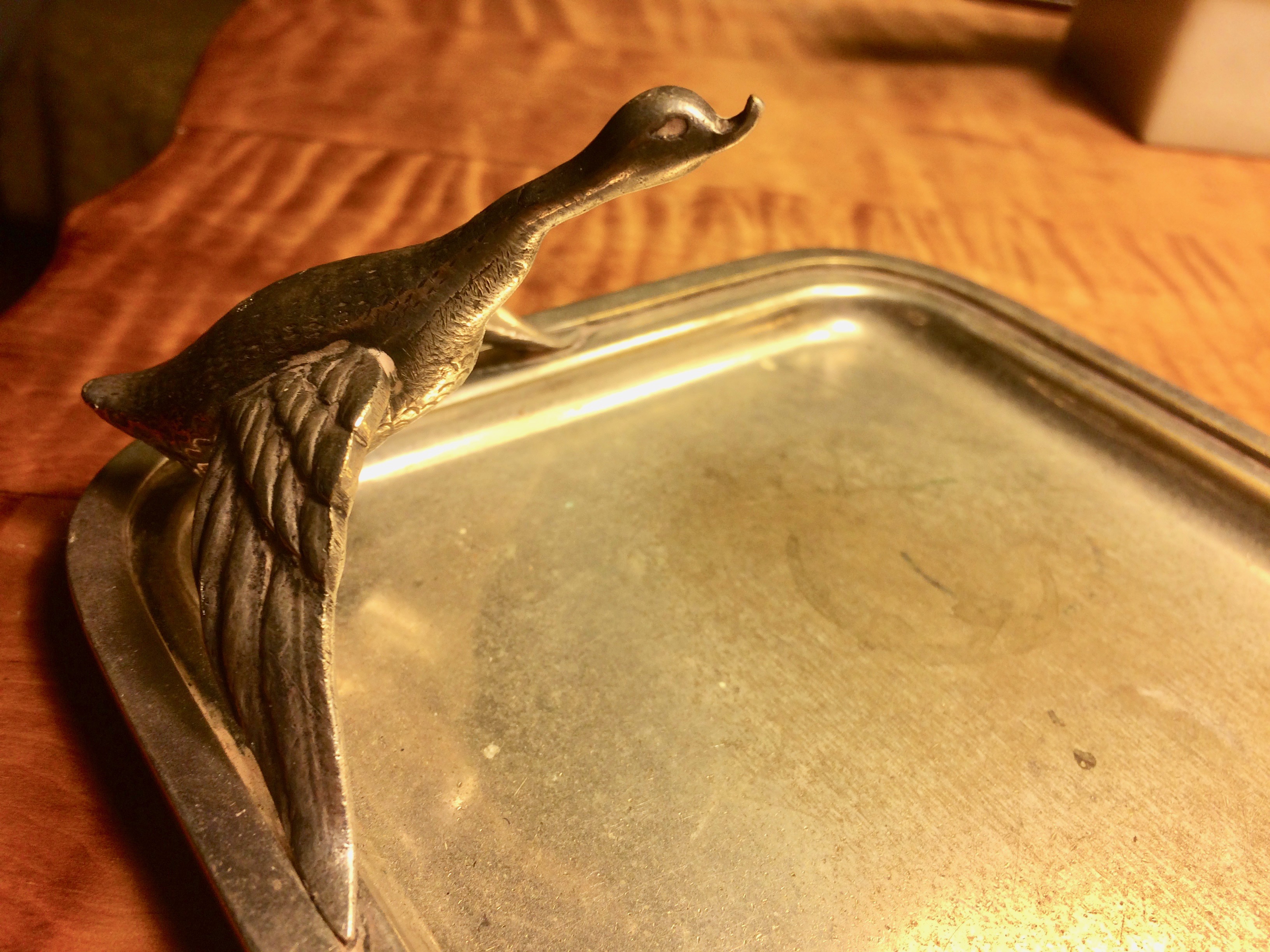 Meanwhile in Dobrzyn, Hili the Editor is disturbing Andrzej and the running of Listy:

Hili: I didn’t think that playing with a mouse could be so attractive.
A: I have a feeling that my patience will end in a moment. 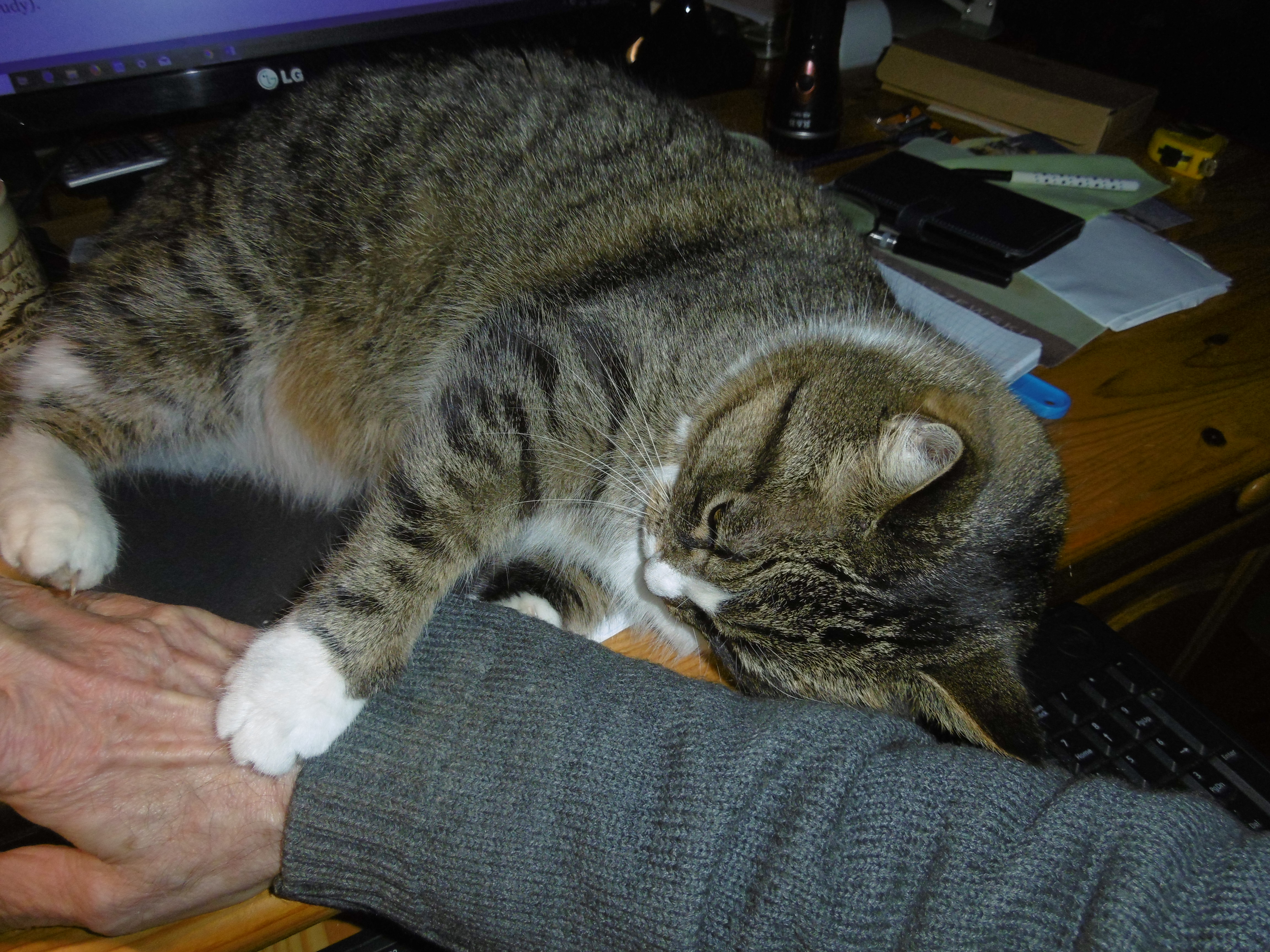 Also in Dobrzyn, Szaron is nearly completely tame now; here he is with Andrzej on the porch: 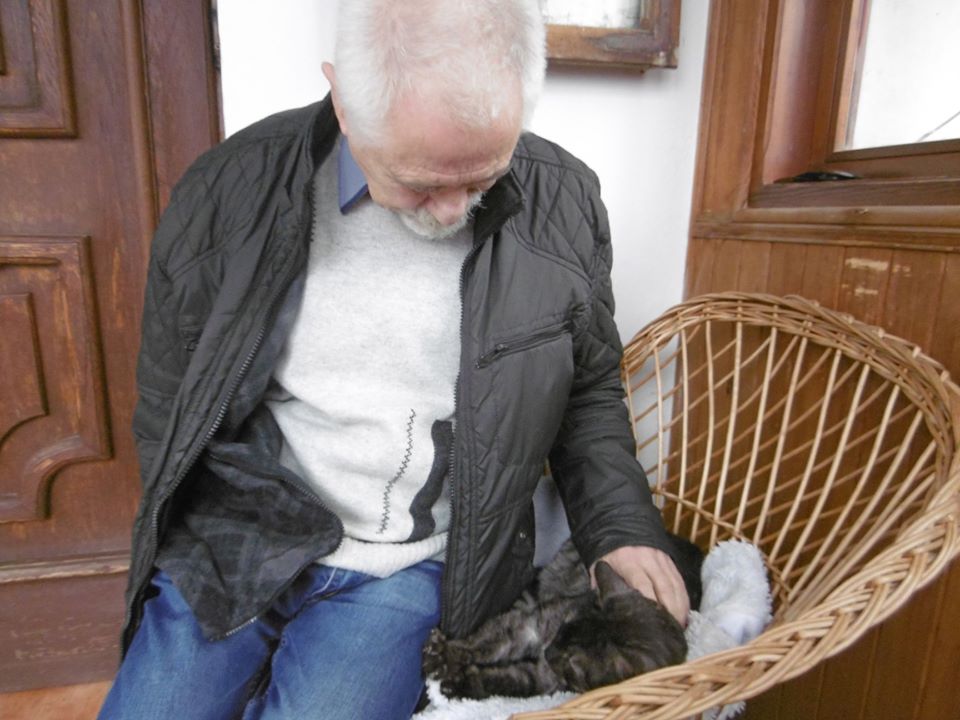 And just one tweet today, but a good one (sent by Matthew). A strong leopard lifts both an antelope and a thieving hyena. Sadly, the hyena seems to have won:

What an incredible display of strength by the Schotia female leopard. Can she hold on? Video captured by Field Guide Damin Dallas at Singita Sabi Sand. pic.twitter.com/hIIrcDVvsz

21 thoughts on “Wednesday: Hili dialogue (I have landed)”