Who doesn’t like James Carville? He’s smart, strongly liberal and pro-Democratic Party, and has an impish look but a potty mouth. His Louisiana accent is endearing. And he’s famous as a campaign strategist and for posting these three mantras on the wall of the Clinton election’s “campaign war room” in 1992:

The man doesn’t mince words. Carville now teaches at Louisiana State University, and he’s still married to conservative Mary Matalin (I have no idea how that marriage works!).

So Carville has a recent interview in Vox with Sean Illig, and makes some strong pronouncements about how the Democratic Presidential race this year is going south, and what we need to do to fix it. Click on the screenshot to read it. I’ve given quotes below from only a part of the interview, which you should read in full 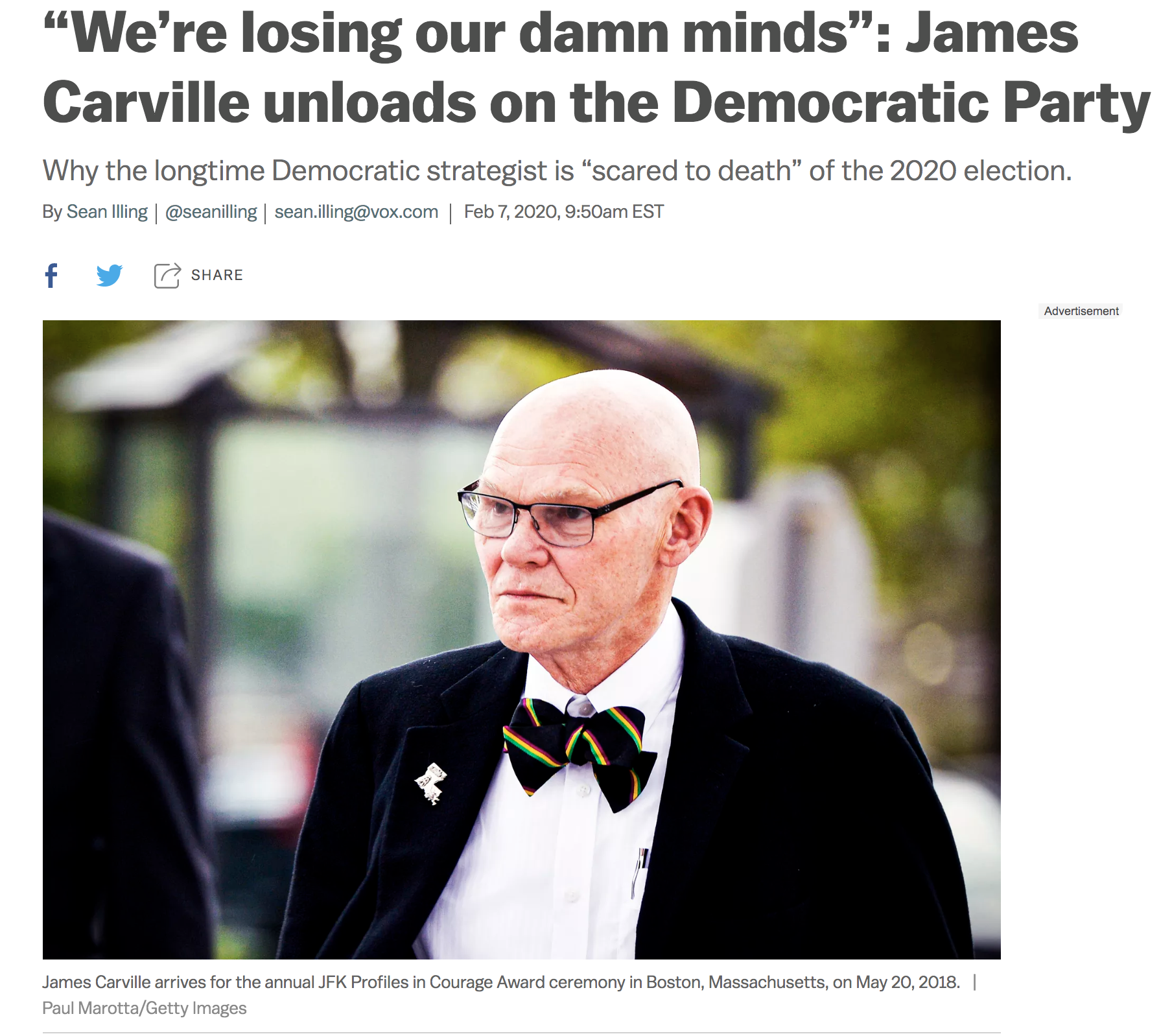 Carville has a lot to say.  He avers that he’s not a centrist but a liberal, but that the Democratic party has tacked to the left—”off the damn radar screen”. He’ll vote for any Democratic candidate, including Bernie, whom he doesn’t much like, but says the Dems have to coalesce around a central message that can appeal to everyone. And they’re not doing it by promoting policies like Medicare For All or “free college tuition or debt forgiveness.” But on to the quotes:

I don’t know. We just had an election in 2018. We did great. We talked about everything we needed to talk about, and we won. And now it’s like we’re losing our damn minds. Someone’s got to step their game up here.

What does that mean?

Give me an example of what you mean by distractions.

We have candidates on the debate stage talking about open borders and decriminalizing illegal immigration. They’re talking about doing away with nuclear energy and fracking. You’ve got Bernie Sanders talking about letting criminals and terrorists vote from jail cells. It doesn’t matter what you think about any of that, or if there are good arguments — talking about that is not how you win a national election. It’s not how you become a majoritarian party.

The Republicans have destroyed their party and turned it into a personality cult, but if anyone thinks they can’t win, they’re out of their damn minds.

Like many of my friends, including the most liberal ones, Carville isn’t enthused by Bernie, but he’d still vote for him (as would I).

. . . But back to Sanders — what I’m saying is the Democratic Party isn’t Bernie Sanders, whatever you think about Sanders.

A lot of threads there. First, a lot of people don’t trust the Democratic Party, don’t believe in the party, for reasons you’ve already mentioned, and so they just don’t care about that. They want change. And I guess the other thing I’d say is, 2016 scrambled our understanding of what’s possible in American politics.

Are we really sure Sanders can’t win?

Who the hell knows? But here’s what I do know: Sanders might get 280 electoral votes and win the presidency and maybe we keep the House. But there’s no chance in hell we’ll ever win the Senate with Sanders at the top of the party defining it for the public. Eighteen percent of the country elects more than half of our senators. That’s the deal, fair or not.

So long as [Mitch] McConnell runs the Senate, it’s game over. There’s no chance we’ll change the courts, and nothing will happen, and he’ll just be sitting up there screaming in the microphone about the revolution.

The purpose of a political party is to acquire power. All right? Without power, nothing matters.

So your complaint is basically that the party has tacked too far to the left?

They’ve tacked off the damn radar screen. And look, I don’t consider myself a moderate or a centrist. I’m a liberal. But not everything has to be on the left-right continuum. I love Warren’s day care plan just like I love Booker’s baby bonds. That’s the kind of stuff our candidates should explain and define clearly and repeatedly for voters and not get diverted by whatever the hell is in the air that day.

Here’s another stupid thing: Democrats talking about free college tuition or debt forgiveness. I’m not here to debate the idea. What I can tell you is that people all over this country worked their way through school, sent their kids to school, paid off student loans. They don’t want to hear this shit. And you saw Warren confronted by an angry voter over this. It’s just not a winning message.

The real argument here is that some people think there’s a real yearning for a left-wing revolution in this country, and if we just appeal to the people who feel that, we’ll grow and excite them and we’ll win. But there’s a word a lot of people hate that I love: politics. It means building coalitions to win elections. It means sometimes having to sit back and listen to what people think and framing your message accordingly.

That’s all I care about. Right now the most important thing is getting this career criminal who’s stealing everything that isn’t nailed down out of the White House. We can’t do anything for anyone if we don’t start there and then acquire more power.

And what about Mayor Pete? (This interview was before Bloomberg seriously began campaigning and debating.) I like Carville’s implicit critique of the Bernie Bros here:

Buttigieg seems to model the sort of candidate you think can win.

Mayor Pete has to demonstrate over the course of a campaign that he can excite and motivate arguably the most important constituents in the Democratic Party: African Americans. These voters are a hell of a lot more important than a bunch of 25-year-olds shouting everyone down on Twitter.

. . . Falling into despair won’t help anyone, though. I mean, you can curse the darkness or you can light a candle. I’m getting a fucking welding torch. Okay?

I’m pretty much with Carville on his view that sharp tacking to the left won’t do the party any good, that many Democratic candidates are supporting positions that won’t play well with “non elite” Democrats or with African Americans, and that I find no candidate who stands out strongly from the pack.  I’ve always liked Carville, and agree with him here. I mean seriously, free college tuition for people in college now but not those who just graduate? Open borders? Now that is going to play well with Middle America? Or debt forgiveness for those who have debt now, but “screw you” to those who already paid off their debt? This kind of stuff is going to make voters angry. It may not make them vote for Trump, but it may well keep them from the polls.

165 thoughts on “James Carville on the 2020 Democratic candidates”