Tom Chivers is a journalist and science writer who, like me,  was taken aback by the negative reactions to Richard Dawkins’s recent tweet about eugenics. (Remember? Richard said eugenics would “work” in the sense of changing population means in humans, but immediately added that he was against it.) Now, at UnHerd, Chivers has proposed a “theory” to explain the dichotomous reaction. (It did seem pretty dichotomous, with lots of people understanding what Richard was trying to say but a big number demonizing Dawkins for “favoring eugenics.” There were a few, like me, who understood what Richard was saying but thought he should have said it in a longer piece rather than vomiting it out on Twitter. Or not said it at all.)

First, an earlier tweet from Chivers in which he expressed the rudiments of his idea:

Why is this annoying people? Of course it’s true. He’s not condoning it, just saying it would have an effect.

(I know why it annoys people: because separating the factual “would it work” from the moral “is it right” is hard. But it annoys ME that people won’t put the effort in) https://t.co/tJkqJMvbO6

Click on the screenshot below to read Chiver’s theory, which is his: 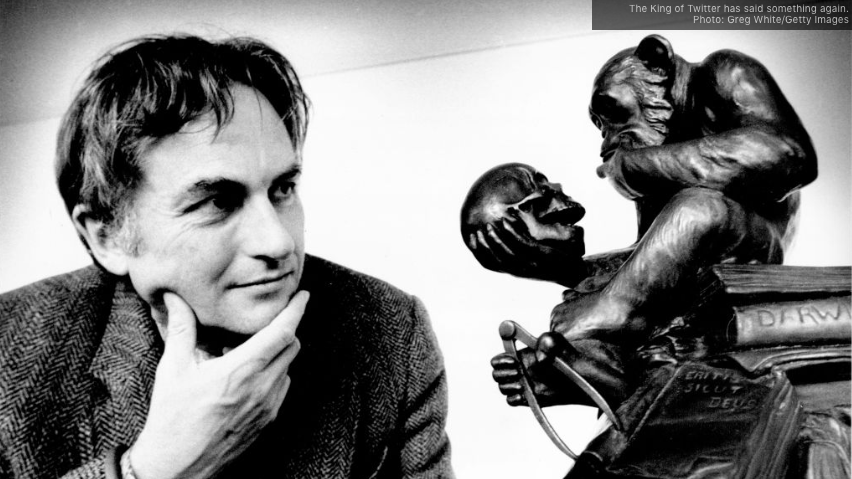 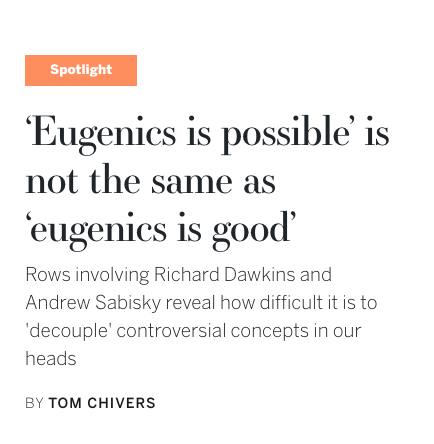 So Chivers’s idea, which is his, is that there are two types of people: the “high-decouplers”, which, in a statement like Dawkins’s, can easily separate the “is”s from the “ought”s. They can see that he’s making a statement about the malleability of human traits to artificial selection and, at the same time, realize that this doesn’t mean Dawkins favors such intervention.

Then there are the “low-decouplers”, which couple Dawkins’s “is” statement with his “ought” statement. (I’d prefer to call the groups “couplers” and “uncouplers”.) These people embed Richard’s “eugenics would work” statement in a political and cultural milieu, and are unable to separate them. Ergo Richard, by saying “eugenics works”, is somehow justifying Nazism. That isn’t an exaggeration, as you can see if you’ve followed the pushback.

As an example of a low-decoupler, I posted a tweet from a scientist who called Richard a “clown” who was “supporting eugenics” and deserved to be denounced. When I asked in my post if that scientist actually read what Richard wrote, I was denounced by the person (a woman) as a “sexist asshat”. (The exact wording was “So in addition to ‘Fuck eugenics’ and “Fuck dawks,’ I’d like to add, Fuck Jerry Coyne you sexist asshat”.) That, I realized after reading Chiver’s piece, was double “low-decoupling”: not only was the person unable to decouple Dawkins’s “is” from his “oughts”, but was unable to decouple my mild criticism of her from the presumption that I was a “sexist” (and an asshat, too). What would imply I was a “sexist” beyond her own sex?

So here’s Chivers’s take (a quote, not the full piece):

I have a rule that I try to stick to, but which I break occasionally. That rule is “never say anything remotely contentious on Twitter”. No good ever comes of it. Arguments that need plenty of space and thought get compressed into 280 characters and defended in front of a baying audience; it is the worst possible medium for serious conversations.

. . . The analyst John Nerst, who writes a fascinating blog called “Everything Studies”, is very interested in how and why we disagree. And one thing he says is that for a certain kind of nerdy, “rational” thinker, there is a magic ritual you can perform. You say “By X, I don’t mean Y.”

Having performed that ritual, you ward off the evil spirits. You isolate the thing you’re talking about from all the concepts attached to it. So you can say things like “if we accept that IQ is heritable, then”, and so on, following the implications of the hypothetical without endorsing them. Nerst uses the term “decoupling”, and says that some people are “high-decouplers”, who are comfortable separating and isolating ideas like that.

Other people are low-decouplers, who see ideas as inextricable from their contexts. For them, the ritual lacks magic power. You say “By X, I don’t mean Y,” but when you say X, they will still hear Y. The context in which Nerst was discussing it was a big row that broke out a year or two ago between Ezra Klein and Sam Harris after Harris interviewed Charles Murray about race and IQ.

. . .That’s what I think was going on with the Dawkins tweet. Dawkins thought he’d performed the magic ritual – “It’s one thing to deplore eugenics on ideological, political, moral grounds. It’s quite another to conclude that it wouldn’t work in practice” =  “By X, I don’t mean Y.” He is a nerdy, high-decoupling person, a scientist, used to taking concepts apart.

But many people reading it are not high-decouplers; they hear “eugenics” and “work” and immediately all of the history, from Francis Galton to Josef Mengele, is brought into the discussion: you can’t separate the one from the other.

. . . But I think the decoupling thing makes me understand a bit more why Dawkins’s tweet got people so angry. Sometimes the ritual fails, and the spirits break through the warding circle.

Chivers also explains that Dawkins’s tweet, which seemed to appear out of nowhere, was actually aimed at Andrew Sabisky, a nasty piece of work and a former advisor to Boris Johnson (he appears to have just resigned over racist remarks).

At any rate, Chivers gives some other examples of quotes from people who were demonized because the proper decoupling wasn’t done. Some of those quotes are harder to parse, and Chivers seems to have some sympathy with the victims.  As he says “I think the decoupling thing makes me understand a bit more why Dawkins’s tweet got people so angry.”

Well, the “coupling/decoupling” dichotomy is useful, I think, but hasn’t helped me understand more deeply why Dawkins’s tweet got people so angry. They were angry because they deliberately misinterpreted what he said—either that or they couldn’t read or were just thick. What puzzles me is why so many people were and are so eager to demonize Dawkins. Jealousy is one reason, I suppose, but I don’t think that quite covers it. After all, there are psychological reasons for a seeming inability to decouple that the theory doesn’t cover.

Chivers argues that it’s easier for scientists to decouple because they’re “used to taking things apart,” but I don’t buy that, either. It is those who are enraged by Dawkins—and they include many scientists, who have demonized him for his tweet)—or are determined to bring him down, who can’t decouple in this case. How bright do you have to be to understand that Richard was talking about the efficacy of artificial selection and not that it should be used in humans? Is that so hard—especially when Richard immediately explained what he meant in other tweets?

I will probably use the designations of “couplers” and “decouplers” in the future, as it’s good shorthand for people who link (or don’t link) things that shouldn’t be linked. But I don’t think that giving these groups names helps us understand them or their motivations any better.