UPDATE: Crikey, there’s a whole Twitter “event” devoted to Dawkins’s tweet. People can’t wait to jump all over him.

When Matthew sent me this new tweet from Richard Dawkins this morning, I thought “Oh no! I know what he means, but there are a gazillion people out there ready to misinterpret it as an endorsement of eugenics.” And Matthew said, “Yeah, and everyone’s going to jump on that word ‘work’.”

It’s one thing to deplore eugenics on ideological, political, moral grounds. It’s quite another to conclude that it wouldn’t work in practice. Of course it would. It works for cows, horses, pigs, dogs & roses. Why on earth wouldn’t it work for humans? Facts ignore ideology.

Yep, what we predicted happened.

I didn’t read Richard’s followup (below) until a few minutes ago, and I don’t know whom he was arguing with, but his tweet was clearly intended to show that many human traits are heritable—that is, they would respond to artificial selection, which is what eugenics is. (In “negative” eugenics, you cull or prevent from breeding individuals with undesired traits; in “positive eugenics”, the other side of the same coin, you breed from individuals with desired traits.) As I’ve written before, nearly every artificial selection experiment conducted, on a gazillion different species, has been successful: the mean value of the trait has changed in the direction the experimenter wanted. (Two of the few unsuccessful experiments have been mine: attempts to select for directional asymmetry in flies.)

Artificial selection will work if a trait has any positive heritability, that is, if any proportion of the total variation in a trait among individuals in a population is due to genetic variation—what we specifically call “additive genetic variance” in the trade. And virtually all morphological or behavioral traits have some positive heritability.

Look at domestic dog breeds, for instance. All of them descend from the wolf, yet all the huge variety of their traits: the variation in their size, their shape, their color, and even their behavior (retrievers, border collies, etc.) have come from selecting on traits that have a positive heritability. As Darwin said in The Origin, “Breeders habitually speak of an animal’s organization as something quite plastic, which they can model almost as they please.”

That happens to be true. And it would be true of humans as well if we were able to select on them. Have a look at this paper, for instance (click on screenshot, and if you can’t get it, make a judicious inquiry or use the legal Unpaywall app on Chrome): 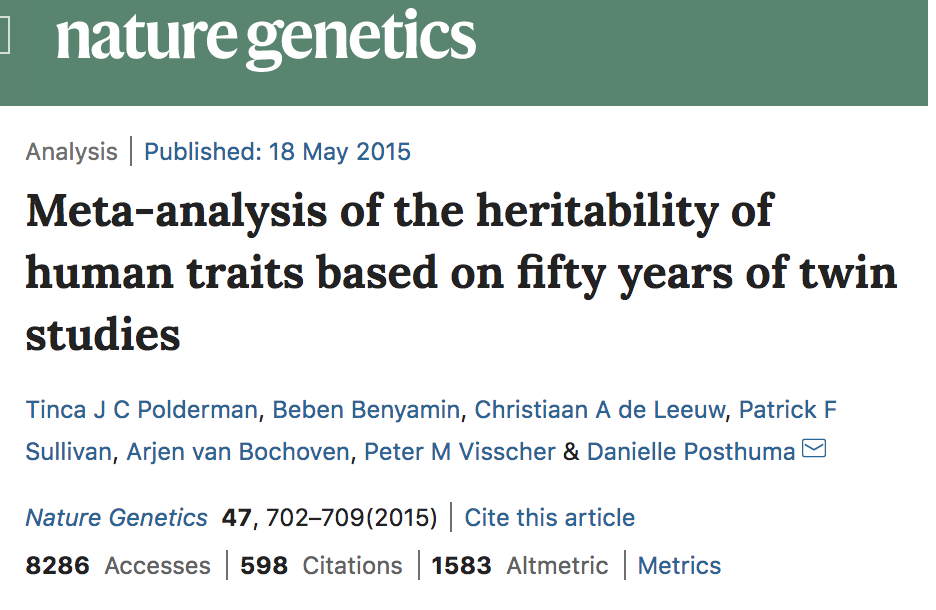 We have conducted a meta-analysis of virtually all twin studies published in the past 50 years, on a wide range of traits and reporting on more than 14 million twin pairs across 39 different countries. Our results provide compelling evidence that all human traits are heritable: not one trait had a weighted heritability estimate of zero.

Not one! They take into account “shared environment” causes of correlations as well. And behavioral traits are among these. The heritability of IQ, as I recall, is about 50%, so if we wanted to improve the IQ of humans, we’d just let the smartest ones breed, and lo, we’d get a fairly substantial change in a few generations.

Should we do that? Hell, no!!  Nobody wants to go back to the era of eugenics, when “feeble-minded” people were sterilized in America and all kinds of mentally disabled people (as well, of course, as non-Aryans like the Jews, who were deemed to have “bad genes”) were killed by the Nazis. But we still practice a mild form of negative eugenics today, in the form of genetic counseling and selective abortion, to prevent couples from having children with deformities or genetic disease. That’s not to improve the population’s genes but to allow couples to have healthy babies. We do no large scale eugenics, positive or negative, to improve the population, and that’s the way it should stay.

In general, no biologist that I know wants to return to the bad old days of wholesale eugenics, which involved not only killing or sterilizing people but demonizing whole groups for their genetic endowment. So I understood what Richard was trying to say.

Should Richard have issued that tweet? Again: Hell no!! Richard knows (or surely must, just as Matthew and I knew) that there are many people out there ready to misinterpret what he says and would use it to imply that Dawkins favors eugenics—that he’s a latter-day Nazi. I see that it’s already happened.

Here’s someone else who didn’t get the tweet at all:

As an evolutionary biologist, it’s my responsibility to denounce this clown

Further, a discussion about artificial selection in our own species or others should surely be more extensive and nuanced, not conducted in the medium of Twitter where you have only a few words to say what you want.

I see that Richard has already gone his usual route of trying to explain what he meant:

A eugenic policy would be bad. I’m combating the illogical step from “X would be bad” to “So X is impossible”. It would work in the same sense as it works for cows. Let’s fight it on moral grounds. Deny obvious scientific facts & we lose – or at best derail – the argument.

So what is Richard guilty of? Unwise tweeting! He’s not a neo-Nazi, and, knowing him, I know for sure that he’s not in favor of eugenics. But he should have learned by now to stay away from Twitter, at least on issues like this one.

Now I don’t know who he was responding to in the initial tweet, but it looks as if somebody somewhere said that eugenics wouldn’t work in humans. If they said that, they’re wrong, and Richard is right. But it doesn’t look as if his tweet was responding to anybody in particular (or at least I haven’t been arsed to investigate), and so he should have kept his thoughts to himself.  But it is, I suppose, useful to emphasize that we, like all animals, contain a reservoir of genetic variation for almost all traits, and that means that we could respond to artificial selection. But that should immediately be followed, for those eager to demonize you, by the statement that of course we shouldn’t artificially select on members of our own species. What’s possible is of course not identical to what we should do.

Bad optics, my friend Richard. But those of you ready to use that first tweet to demonize the man—please lay off. He may be a hamhanded tweeter, but he’s no Nazi.