As I near the end of Philip Goff’s trade book (Galileo’s Error: Foundations for a New Science of Consciousness), aimed at convincing the public that panpsychism is true, I came across a tweet that led me to an online “letters” conversation between Goff and philosopher/biologist Massimo Pigliucci, which you can read in the second screenshot below. Twitter does have its uses (h/t Matthew Cobb):

Spot on final reply from @mpigliucci in his exchange of letters about panpsychism with @Philip_Goff.

"Once data are ruled out as arbiters among theories, those theories become pointless, just another clever intellectual game."https://t.co/CktIY2zq5V

In the exchange referred to above, each participant has four short letters, and they argue back and forth about whether panpsychism is a necessary theory, whether it’s a true theory, and whether it’s a scientific theory. 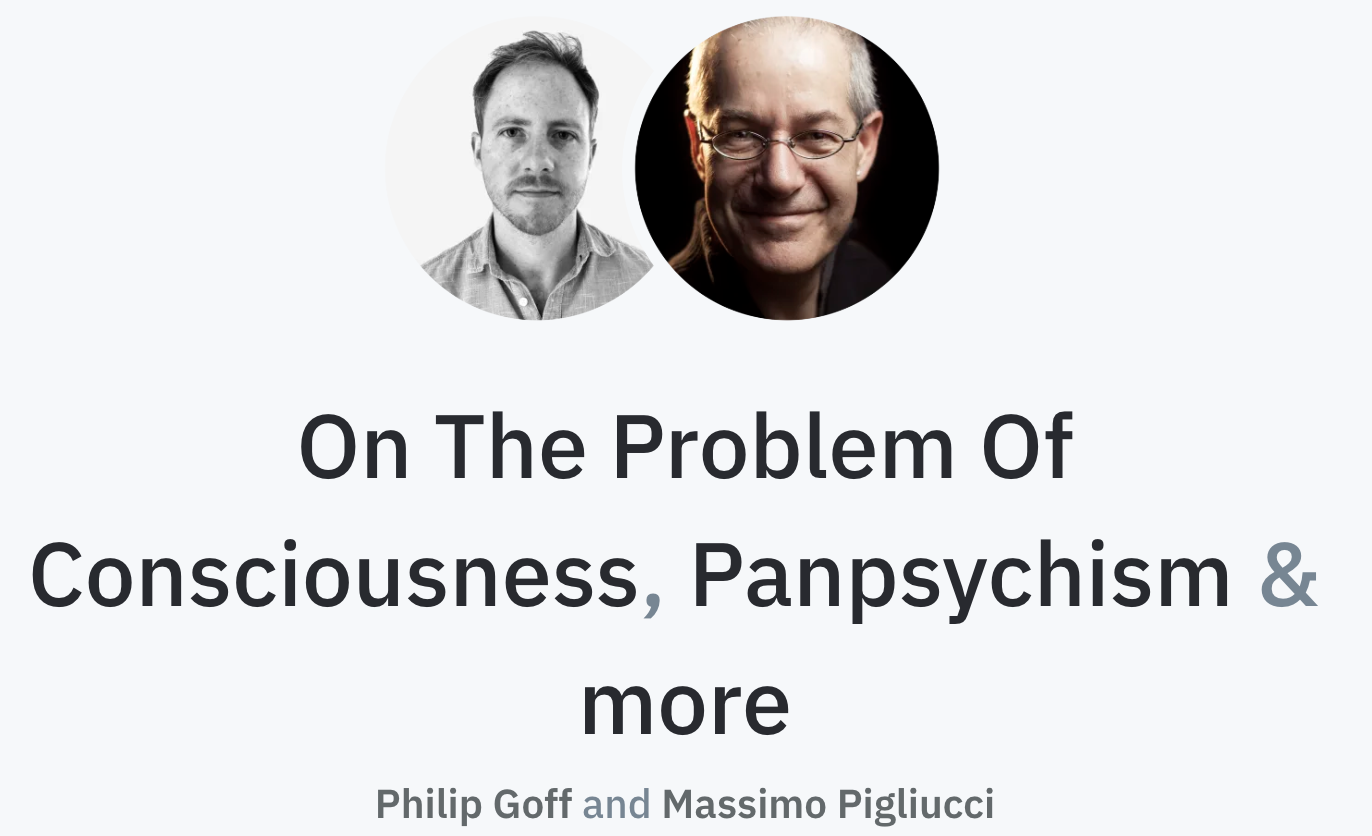 Let me first lay out in a series of numbered statements, which I intended to do before I read this exchange, what I think is Goff’s theory. I’ll then simply quote a few of Massimo’s ripostes, some of which were coincident with my earlier objections, and some other ones which come from his greater expertise as a philosopher. I have to say again that although Massimo and I have had our differences—many, actually—I’ve never hesitated to admit when he’s right, and in this case I think he pretty much takes Goff apart.

But first, here’s what I see as Goff’s theory, which is also the way many people conceive of panpsychism. Remember, this is how I interpret Goff, not what I believe myself. I’ve had to add comments about bits of the theory that I find problematic.

1.) Materialism, the underlying basis of science, is wrong.

2.) Why? Because materialism and the science that uses it rely on quantitative analyses, and if a phenomenon in the Universe can’t be expressed quantitatively, but is still a real phenomenon, then it disproves materialism. (I use the term “naturalism” instead of materialism, as some of the realities of the cosmos, like gravity, aren’t “material” but are nevertheless real phenomena.)

3.) Consciousness is one such phenomenon. No matter how much scientists labor at understanding consciousness—and by that term Goff means “qualia”: the subjective experience of seeing the color orange or tasting salt—no materialistic (scientific) theory will ever explain how that sensation feels. It may provide neurological “correlations” of such experiences, but understanding why the color orange looks as it does, and other subjective experiences, will always elude quantitative explanation. Therefore materialism is false, and it’s false because it can’t explain how we come to “feel.”

4.) Further falsification of materialism comes from its failure to tell us what the “intrinsic nature of matter” really is. All we can do with something like electrons, avers Goff, is to measure how they behave and how they interact with other particles. But we can’t really express what their “intrinsic nature” is. (I have to say that this “intrinsic nature” stuff mystifies me, especially when Goff defines the consciousness of electrons; see below.)

5.) Goff isn’t a dualist, so he doesn’t think that there is “consciousness stuff” separate from matter. Therefore he has a “scientific” theory (see the subtitle of his book) for how we get consciousness. It is panpsychism. Panpsychism isn’t new (Goff mentions Eddington’s version), but Goff (also citing his ex-advisor Galen Strawson) says that there’s a resurgence of interest and acceptance of panpsychism due to his efforts and those of Strawson.

6.) Panpsychism arises because, Goff concludes, we can’t derive a materialistic explanation of consciousness, yet it exists, so it must somehow be inherent in the brain in a way that has eluded us.

8.) So what is the nature of consciousness in particles like electrons or atoms? Goff isn’t clear, but does say they have a rudimentary form of consciousness that differs from the “higher” self-reflective form of consciousness in humans. What form does particle consciousness take? Goff says that, for electrons, for example, it consists of stuff like their spin, their charge, and their mass. (Again I am mystified, as those properties are again detected by quantitative materialistic analysis, the so-called “correlations”. Why they constitute “consciousness” remains for me a mystery, and seems like a semantic issue.) Asserting that particles are conscious, says Goff, finally solves the vexing problem of what the “intrinsic nature” of matter is. It is consciousness.

9.) Finally, when you get a brain like ours that is built of many semi-conscious particles, somehow you get a massive increase in consciousness, so now the particles can have experiences, see red, and reflect on their experiences. How this happens is what philosophers call the “combination” problem, and so far I have not seen a solution, though I still have about 1/4 of Goff’s book to read.

Here’s a summary from Goff’s first letter of the exchange:

Very roughly, the idea is that physics only tells us about the causal structure of the physical world – what things do – and leaves us completely in the dark about the intrinsic nature of matter that realizes that structure. The Russellian panpsychism holds that consciousness is the intrinsic nature of matter. Why believe this? Well, we know that consciousness exists, and we have to fit it in to our theory of reality somehow. Russellian monism offers us a way of doing this, and I’ve argued at length that it avoids the deep difficulties I believe face the more conventional options of materialism and dualism.

That is the scientific theory of consciousness, but it’s not really “scientific” because, as even Goff admits, it’s untestable. If you assert that electron spin is “consciousness”, you haven’t explained anything.

At any rate, as the letters go back and forth between Massimo and Goff, Massimo gets more and more perturbed, for Goff, like all advocates of panpsychism, is very clever at avoiding specifics (like how spin  = consciousness and how “combination” works) and is good, as Massimo asserts, at sophistry.

Anyway, here are a few quotes from Massimo, given in order. If you want to see Goff’s claims, just click on the link above. I think I’ve summarized them pretty fairly above. Massimo’s quotes are indented:

When you say that neuroscience cannot “express” the quality of consciousness, what exactly do you mean? If neuroscience were one day capable of delivering a complete mechanistic account of how consciousness is made possible, what would be missing? Don’t say “the experience itself,” since that would be a category mistake: we are talking about explaining the experience, not having it.

Thanks for clarifying where you think Hossenfelder goes wrong. The problem is, she at least provides a coherent view of panpsychism, and one that would be empirically testable to boot. By contrast, when you say that mass, charge, and spin are forms of consciousness I think you crossed into incoherence, and so I withdraw my provisional assent to (1). What does that even mean? Is there, for instance, a different kind of consciousness that accounts for each of the fundamental properties of matter? How does consciousness account for such properties? Why do physicists think that it is other things, like the Higgs boson, that account for some of these properties, like mass? Are they wrong? What reason do you have to say so?

I applaud the empiricism in the quote below!

Finally, you are not actually giving any evidence for panpsychism, you are simply arguing a priori that it must be the best explanation. But as I wrote last time, I believe first philosophy died with Descartes: we can’t arrive at firm conclusions about how the world works by simply thinking about it. We need evidence. Which means that we need science.

In Goff’s book, one of his major points is that you don’t need to refer to or observe nature to find out what’s true about nature. Rumination is sufficient.  He uses an example of a thought experiment that by itself shows contradictions in the idea that heavier objects fall faster than lighter ones. Ergo, the idea that all objects fall at the same rate (in a vacuum, absent air resistance) is a conclusion that can be derived entirely from philosophy. But of course that theory needed to be tested, because it could have been wrong, and it was tested.

I can’t think of any conclusions about the universe that would be universally accepted without having been subject to empirical testing. That’s why string theory is in the doldrums, and why panpsychism will eventually wane in popularity. Goff’s claim is, I further suspect, part of a strategy to diminish the hegemony of science in explaining nature, and bring many of those explanations into the bailiwick of philosophy alone.

Finally, after further back and forth, it’s clear that Massimo is getting pissed off.

You insist that panpsychism is coherent, but there too you keep falling into an ambiguity. If by coherent you mean logically so, then sure, we agree. But literally an infinite number of models of the world are logically coherent. That doesn’t help at all. We want coherence with the kind of data and theories we get from science. And that’s where panpsychism spectacularly fails. There is absolutely nothing in modern physics or biology that hints at panpsychism, and you have acknowledged that no empirical evidence could possibly bear on the issue. That acknowledgement, for me, is the endpoint of our discussion: once data are ruled out as arbiters among theories, those theories become pointless, just another clever intellectual game.

And so it ends with this salvo by Pigliucci:

The path you, Chalmers and others are attempting to chart has already been tried, centuries ago, and has brought us—as David Hume put it—nothing but sophistry and illusion.

Now you may say that I’m unfair in quoting only Massimo, but too bad. You can read Goff’s answers at the link above, and if you sign on to panpsychism, Ceiling Cat help you. Truly, I do not understand why apparently smart intellectuals have any truck with this bizarre theory—a theory that is not only untestable, but isn’t even a theory at all since it’s missing key parts, like where does the consciousness reside in an electron?

A survey of philosophers shows that while a bare majority leans toward physicalism in the mind, more than a quarter are “non-physicalists” when it comes to the mind:

Unlike some other scientists, I don’t dismiss philosophy, as I think it has immense value in teaching us to think clearly. Philosophers are, after all, people trained in spotting logical errors, confusions, and other such muddles. But philosophy is not perfect, and sometimes it goes off the rails in a big way—sometimes because someone is overly ambitious. Panpsychism is a spectacular example of such derailing, and I agree with Massimo that it’s going nowhere. But in the meantime, people actually get paid to limn such theories—if you can call them theories.  It’s more a cult based on bizarre and untested (and untestable) claims, making faith-based assertions about the world.

Why is it so popular? You tell me!

67 thoughts on “Even more on panpsychism”