First, Happy Thanksgiving! (If it is Thanksgiving; I’ve lost track of time. I wonder if they’ll have turkey for dinner.)

Today’s travel report will be a short one, for I have many pictures of Port Stanley and of penguins to process, reduce the resolution for posting, and label. Right now I’m catching up to Friday, when in the morning we positioned ourselves for several hours along the famous Elephant Island. (We didn’t “anchor” because we don’t use an anchor.)

First, though, below current position as of 5:30 a.m. Monday. We’re still in the Falkland Islands, where we’ll be until Tuesday evening when we head for the end of the trip at Punta Arenas. Here’s our current position on the ship’s map, and a zoom out so you can see where the Falklands lie.

We left Port Stanley last night and steamed through rather tumultuous seas, heading to today’s destination, privately-owned Carcass Island, home of Magellanic penguins and many other birds. (We won’t land for several hours, and I’m surprised there was so much sailing from Stanley to where we are now.) The name comes from a Royal Navy ship that surveyed the island in 1766. We’ll have a brisk seven-mile round-trip hike to Leopard Beach (no leopards or leopard seals there).

Our position this morning: 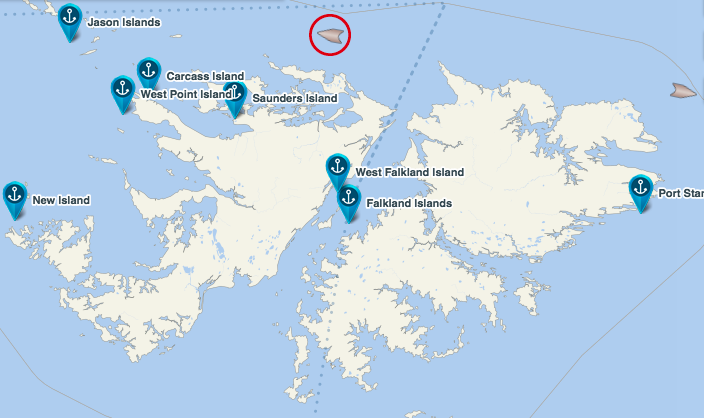 And our position relative to Patagonia. 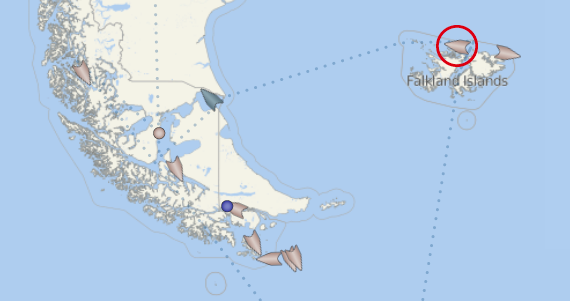 The ship’s Panomax cam shows us an overcast sky and some moderate wave action in the sea. If I were prone to seasickness, which isn’t the case, I’d be pretty green by now! (Note the weird bumpy appearance of the water, which must be some glitch with the camera.) 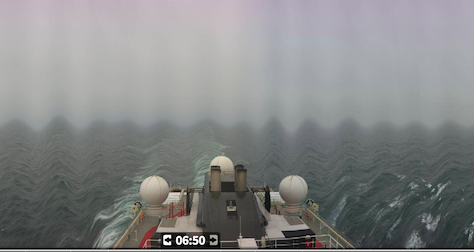 But back to Friday. In the afternoon, as on our last trip, we were allowed to visit the bridge for 15 minutes. This time, though, there were a few photos I wanted to take that I didn’t include in the report of my previous visit on November 11. (Has it been two weeks?)

First, I wanted to show the entire bridge from both port and starboard views (aren’t I good with the lingo?) Here’s the view taken from the port side (it’s crowded with visitors). You can see the two captains’ chairs in the front, and the navigator’s station in the foreground. 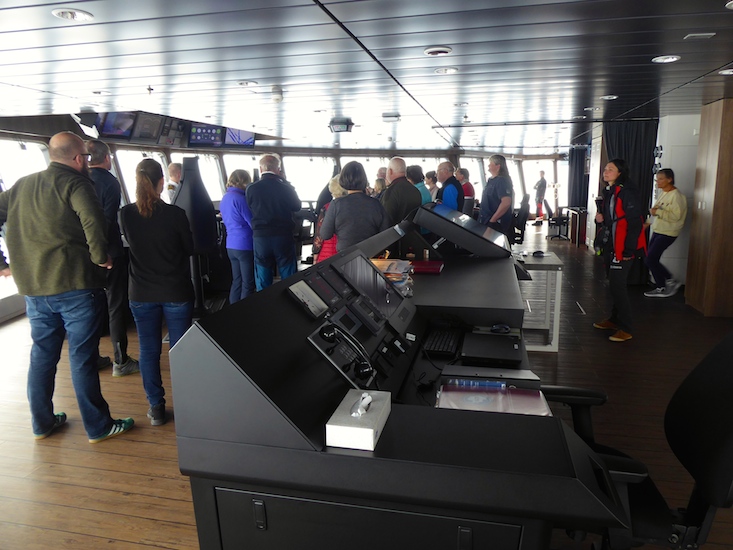 Starboard view of the bridge. You can see it’s quite bright. 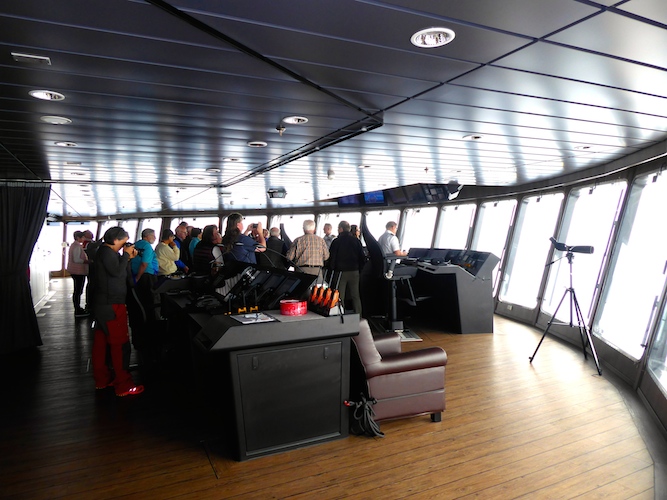 There are two chairs for the captain and co-captain, but I not sure what you call the people who steer the ship but aren’t the Boss Captain. That Boss in the guy to the rear with his left hand in the air, expostulating on the ship. The other two “captains” are in the chairs. The person who is in charge of the ship’s movement when I took this picture is the woman in the middle. All captains and subcaptains stair fixedly ahead, presumably looking for obstacles (the ship was on autopilot during our visit): 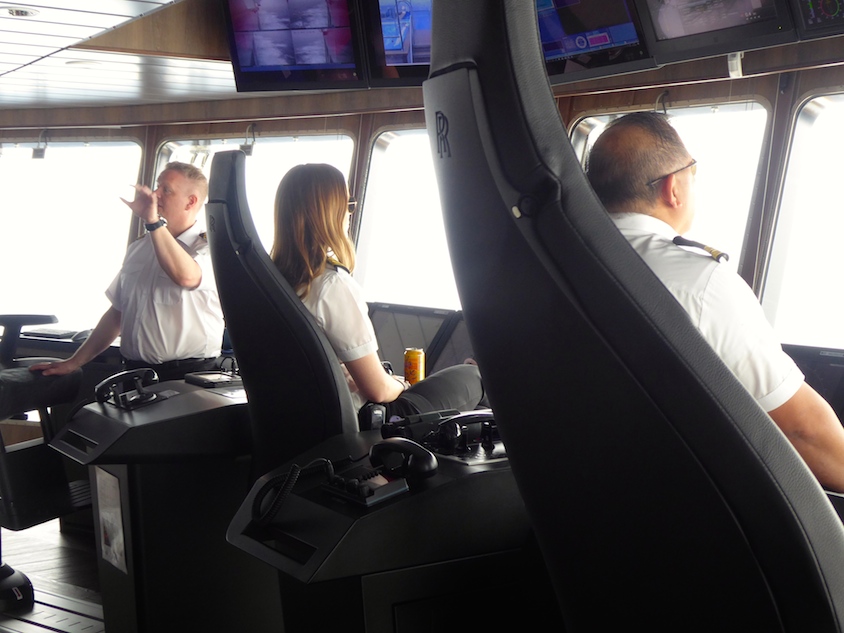 But the ship is steered manually, as when we’re going through channels, avoiding icebergs, or docking. And below is the “ship’s wheel”: the device used to steer this behemoth.

I presume the forward position of the handle adjusts the speed, while its direction adjusts the heading. When we were on the bridge, the woman in charge had her hand on this device. I asked the Boss Captain (I didn’t want to interrupt the woman at the “wheel”) why she was using manual steering if the ship was on autopilot. She turned around and said, “I just like to hold onto it”, and everyone laughed.

They have a complete duplicate of the steering setup on the port side of the bridge for use when docking. The ship always docks with the port side by the pier, as that’s the side the gangway’s on. Apparently they need a view of the pier when landing the ship. 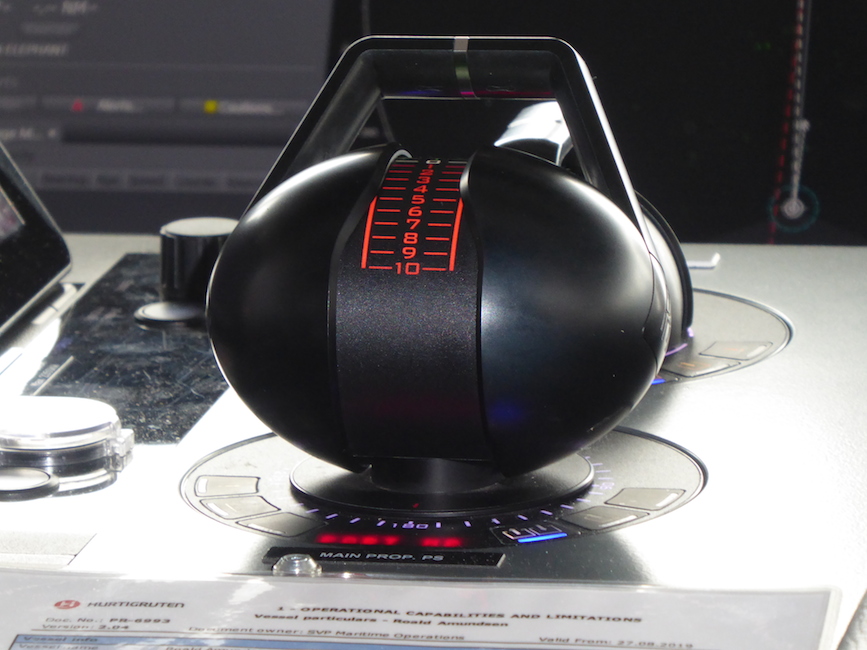 I showed some of the digital readouts in my previous post, but not this one. It apparently shows the status of the watertight doors (shades of the Titanic!), the signal lights, the fire alarms, and the emergency stop panel, whatever that is. Perhaps readers can add details 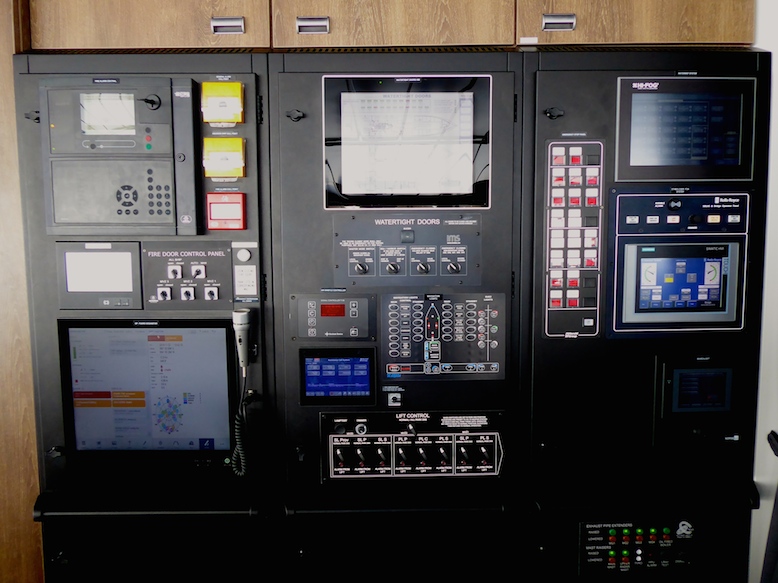 The navigation board, effectively a big iPad, shows us heading straight through the Drake Passage: 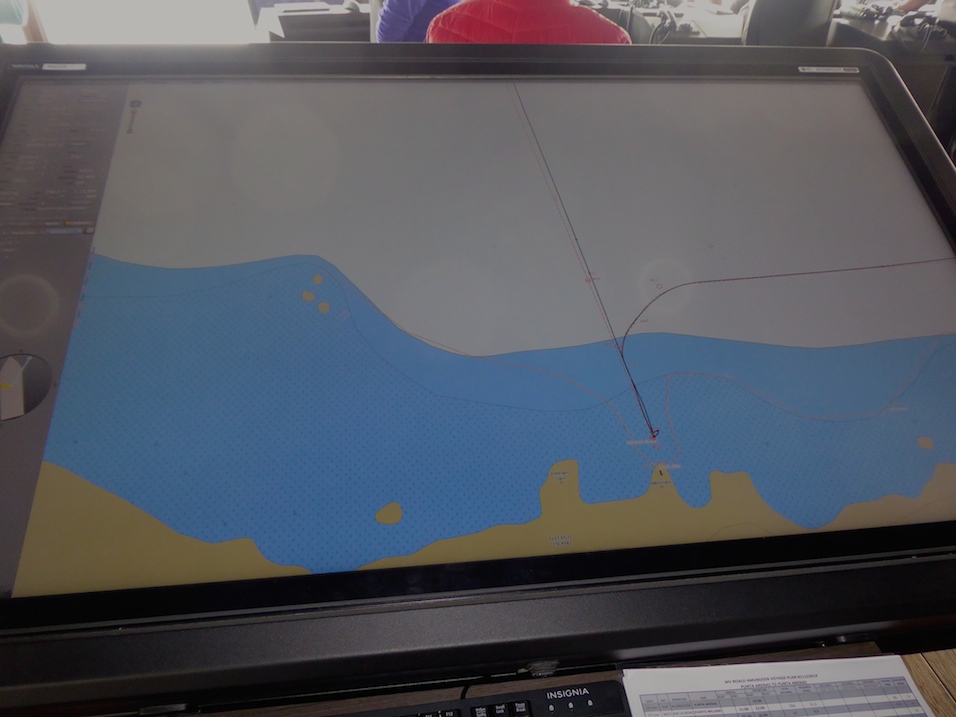 There was a memento on the bridge commemorating the ship’s official christening on November 8, when Karin Strand, the ship’s “godmother,” broke a piece of ice over the bow (see my photos here). The statue, a gift from the MS Midnatsol, appears to be a penguin, and has the inscription below:

MS Midnatsol is the Roald Amundsen’s predecessor as the company’s excursion flagship, and was beside us during the christening. (She’s even larger than we are, carrying 1000 passengers—twice as many as the Amundsen.) 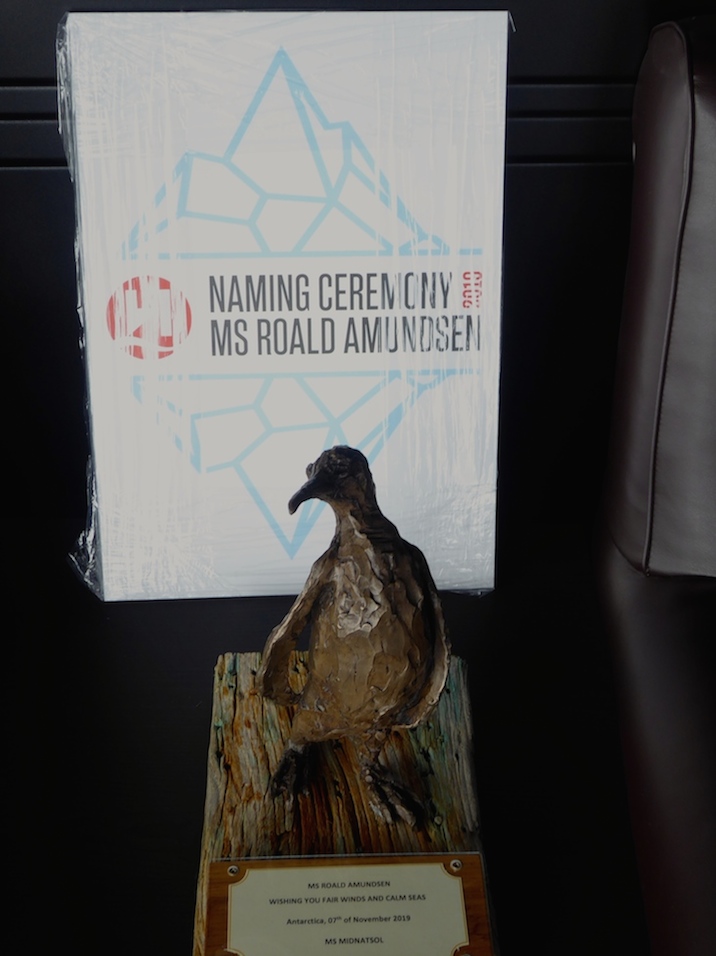 The captain’s cabin is right beside the bridge, and they leave the door open, I suppose so we can peek in. I did, and took a photo. It’s not very different from my cabin, and certainly isn’t luxurious. 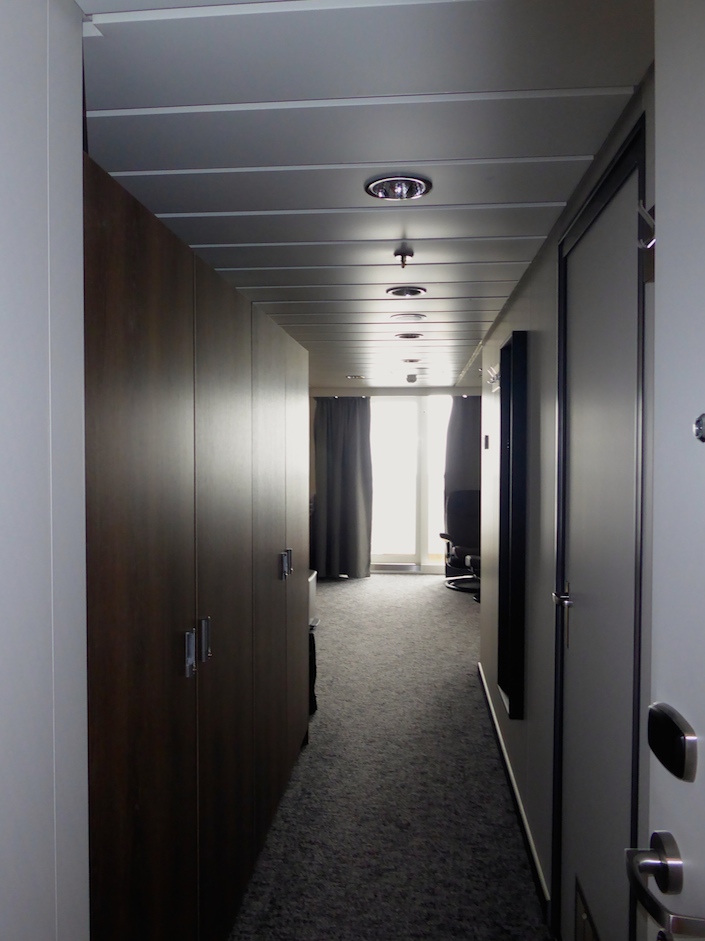 The Expedition Team posted maps by the science desk showing our routes from Punta Arenas to Antarctica across the Drake Passage, and then our voyages around the Antarctic Peninsula. Here are the two maps: 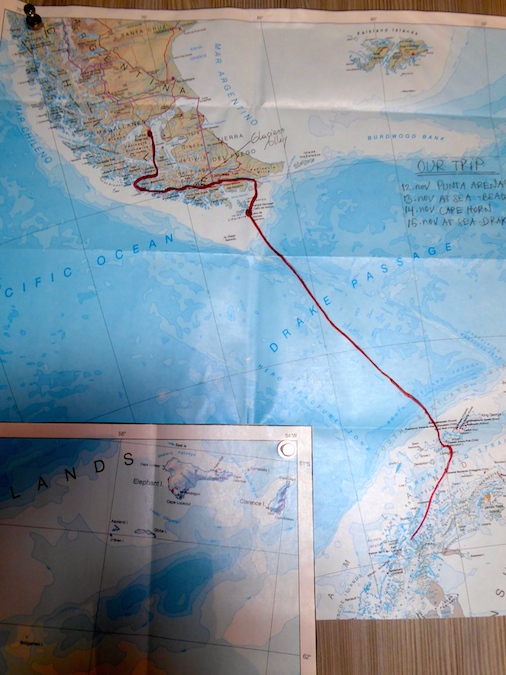 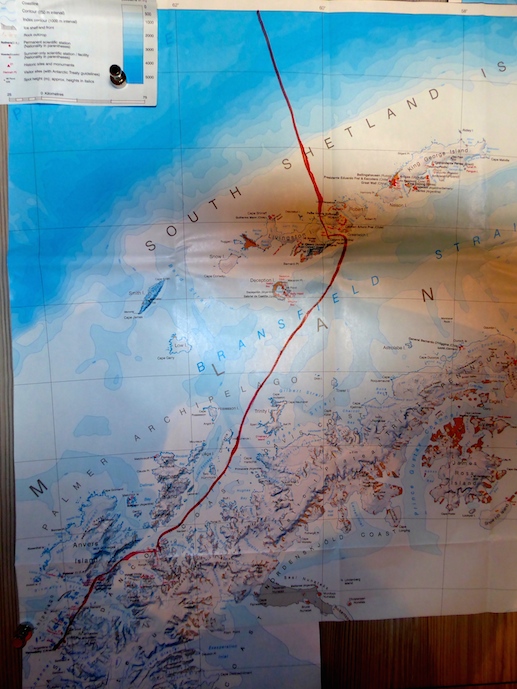 Finally, here are the penguins made by passengers during the “clay and paint penguin workshop” held for those who wanted to show their artistic bent. The products vary in quality, of course, but I like the prone chinstrap penguin in the second photo. 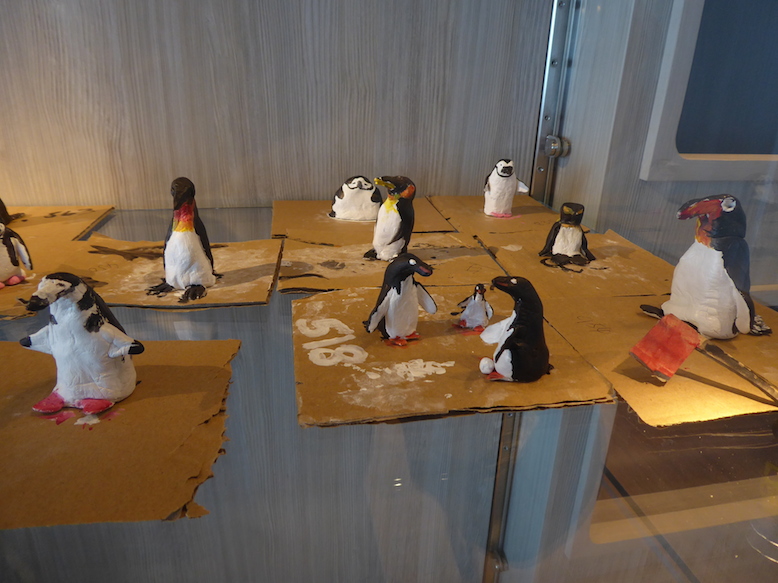 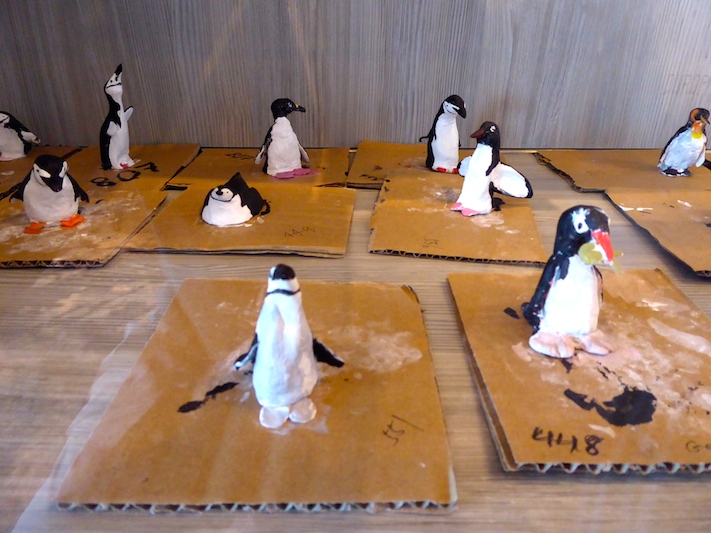 50 thoughts on “A visit to the bridge (and lagniappe)”