This is a “get off my lawn” post, but indulge me. I first noticed this trend in my journalistic bête noire, HuffPost.  That place has a lot of articles with headlines like “X happened. Why that matters.” Or “I am X. . . here’s why”. Or “So you want to do X? Here’s how.”

To show you what I’m talking about, here are some examples, first from the HuffPost, then the New York Times, then one I found in the Boston Globe, where the rot has apparently spread. The first two side-by-side headlines are from today’s front page of the HuffPost:

And from recent pages of the New York Times, the first one just today: 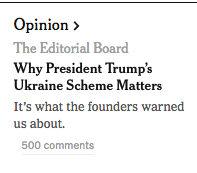 And one from the Boston Globe:

Salon is at it too, of course: 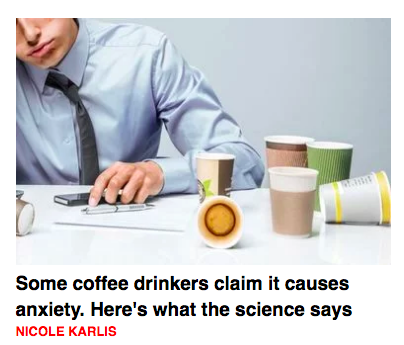 I don’t like this kind of phrasing for several reasons. First, it’s patronizing, often telling us why we should care or how we should feel or react. It’s okay if a paper summarizes the salient points of a news issue, but why can’t they say, for example, “The importance of President Trump’s Ukrainian scheme”? The news isn’t supposed to prompt a reaction in us; it’s supposed to tell us the news.

As for the more personal stuff, emotional reactions shouldn’t be prompted by a headline, but spontaneously felt after reading the story. Further, you can always eliminate the “here’s”, as in the headline “Here’s why it’s so hard to unpack after a trip.” The first word is superfluous. Nearly all these headlines could be written without the “I’m gonna tell you why” slant.

This style of headline seems to impugn the reader’s intelligence, making one feel that the papers are trying to spell out for the benighted why they should care about an issue or a story.

If I wanted to float a hypothesis, which is mine, it would be that this does indeed reflect the dumbing down of journalism. People who read news are getting increasingly older, while many younger people may have a shorter attention span and will gravitate to articles that purport to tell them the highlights of an issue right in the headline, or lure them to read by saying “why X matters.” In fact, “why X matters” is a form of clickbait.

Keep your eye peeled for further headlines like this. They’ve been a staple of dumbed-down Leftist journalism like HuffPost for a while, but now the termites are dining deeper, into the wood pulp of more respectable liberal venues.

103 thoughts on “An insidious and patronizing trend in journalism”