As of 6:30 a.m., the map tells us that we’re about to enter the Beagle Channel again, heading to Puerto Williams (the world’s southernmost city with a population of about 3,000) where customs clearance appears to be required for entering and leaving Chile, even via Antarctica. Tomorrow morning we land at the larger town of Punta Arenas, where passengers on this cruise debark and a new crop gets on. 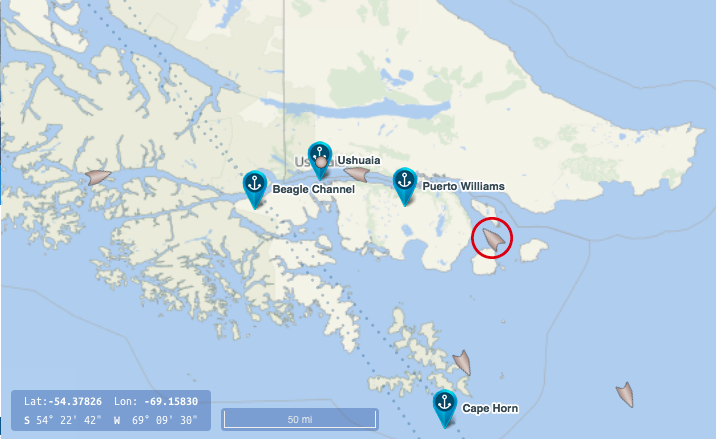 The ship’s Panomax camera has not been updated since 3:10 am so all it shows is the ship, but it’s now dawn and I can see that we’re close to land. View at 3:10: 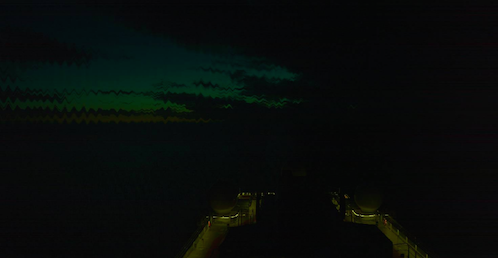 As we were in the Drake Passage yesterday, with no opportunity to go ashore, the ship allowed the passengers to visit the bridge in groups. There captain Kai Albrigtsen, 54 gave us a nice long explanation of how the ship is run (I have pictures of the engines and batteries that I can show later.) The Hurtigruten page on his appointment as captain says this:

Hurtigruten has appointed Kai Albrigtsen as the captain of its newest cruise ship, the MS Roald Amundsen. Albrigtsen has been with the cruise line for 37 years, since joining as a galley assistant at the age of 17.

. . .Throughout his career, Albrigtsen had a number of different positions on board more than 10 Hurtigruten vessels. His first expedition to Antarctica was in 2003, rose to the rank of captain in 2006.

An outdoor enthusiast, Albrigtsen often spends his time off fishing or hiking with his family in Norway’s Vesterålen or Lofoten islands.

For the past two years, he has held the position of master on the Hurtigruten expedition cruise ship MS Midnatsol.

Yes, it’s true (and I asked him before I read the above) that Albrigtsen began washing dishes on Hurtigruten ships, and worked his way up until now he pilots the flagship vessel for the entire company. Here’s the venerable captain standing before his station where the ship is “steered” (it’s largely done by computers and GPS, like an airplane autopilot). 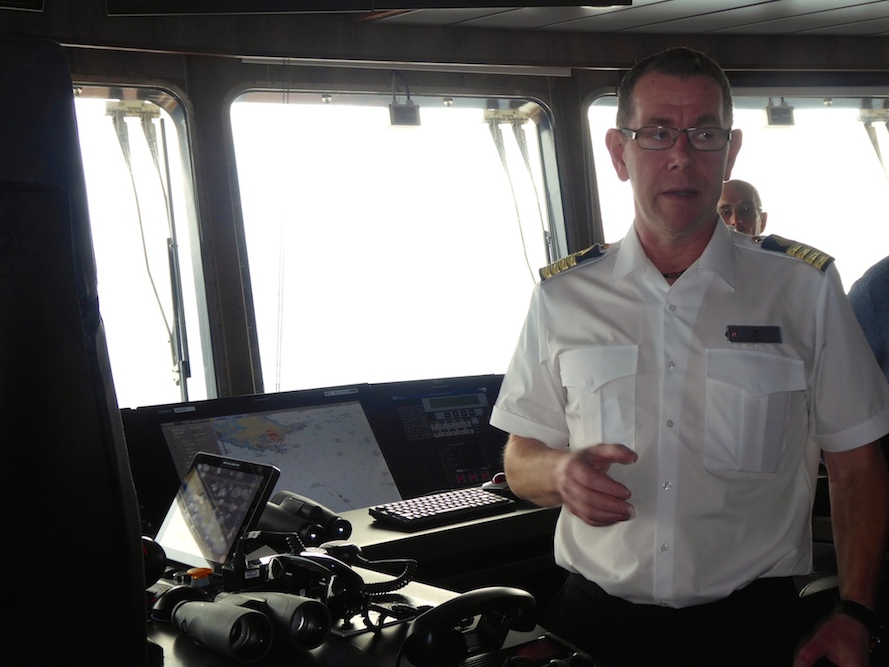 There is no “wheel” to steer the ship as it’s done by computer and computer programming, though there is a “joystick” for manual control.

This is where the captain stands when he controls the ship. I hope that coffee mug isn’t full during rough seas! 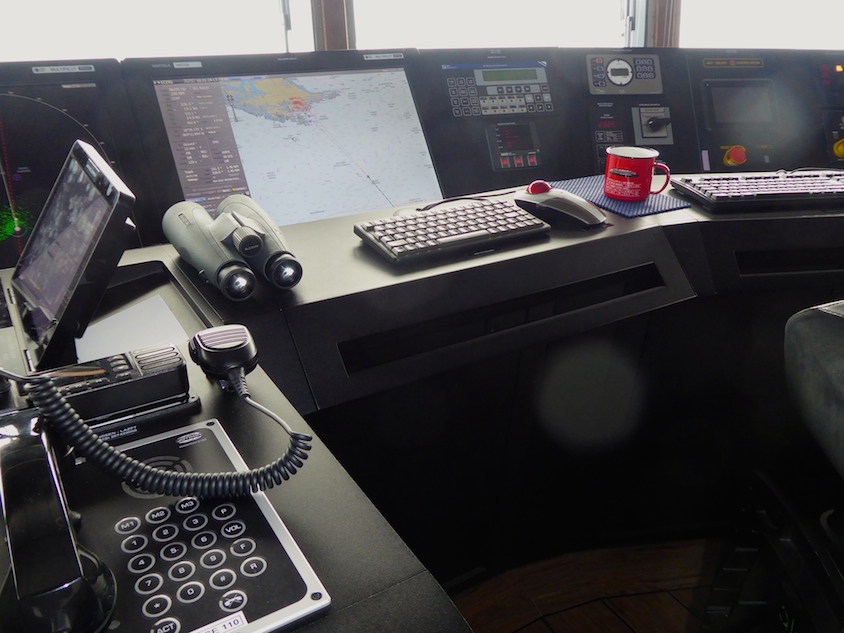 A crew of 5 mans (wrong word, since some are female) the bridge, including the navigator and the co-captain (I can’t remember her name). Each person does an 8-hour shift, with three such shifts per day.

The ship has no rudder, as it’s steered by propellers in both the front and back of the boat. There are also thrusters on the side and two stabilizer fins, one on each side. Those, combined with the propulsion system and GPS, can keep the ship absolutely still in the water, moving at most a meter.  As far as I can see, there is no anchor on the ship, but I didn’t get a close inspection. (The Midnatsol, another Hurtigruten ship I circumvented in a Zodiac, does have an anchor, but I don’t know if they use it.)

Here is the co-captain. I was heartened to see so many women in high positions in the ship and in the company. The purser and several other officers are women. 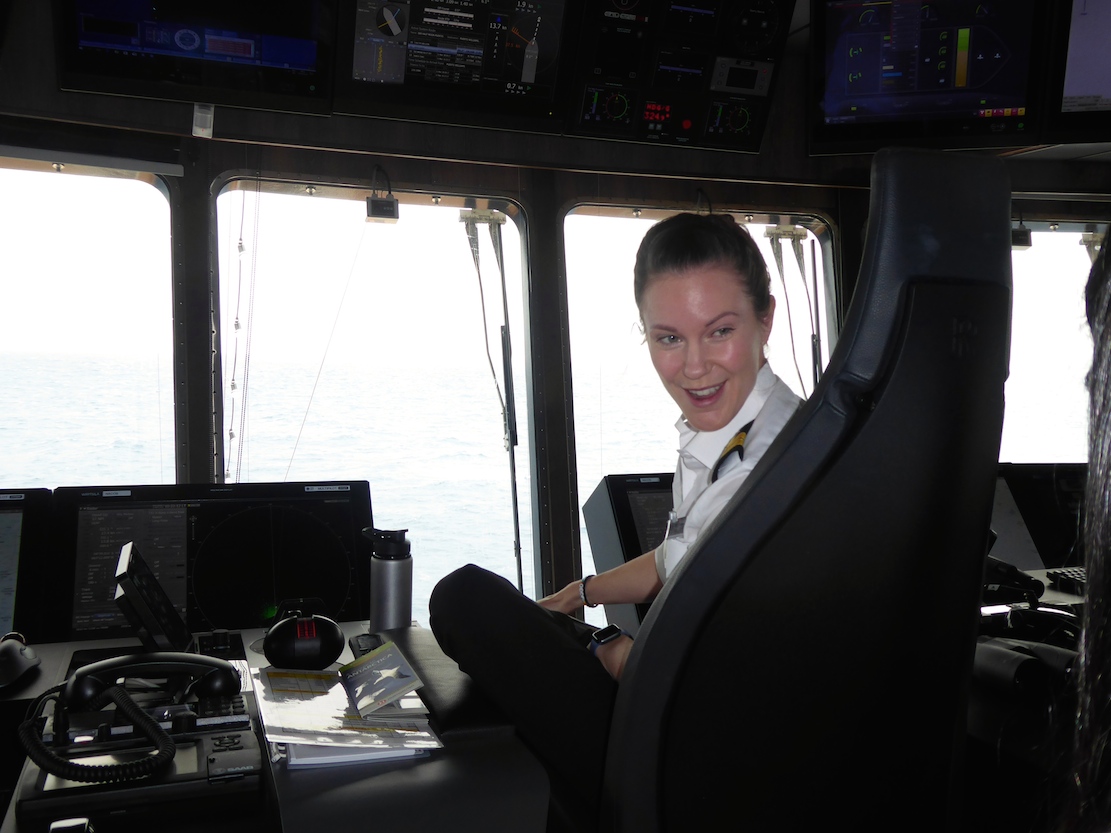 There is the equivalent of a brakeman’s “dead man’s hand” in the ship: if there is no activity at least once every five minutes at night, an alarm goes off for the crew. This of course is to alert people if the skipper is either gone, unconscious, or dead.  I’m not sure how this works, and I may have given an erroneous description since I just overheard the co-captain mention this to another passenger.

Below is the co-captain’s screen. Both she and the captain have chairs, but they don’t sit directly in front of their screens, probably to get a better view of the sea ahead. (There is of course all manner of radar and sonar.) 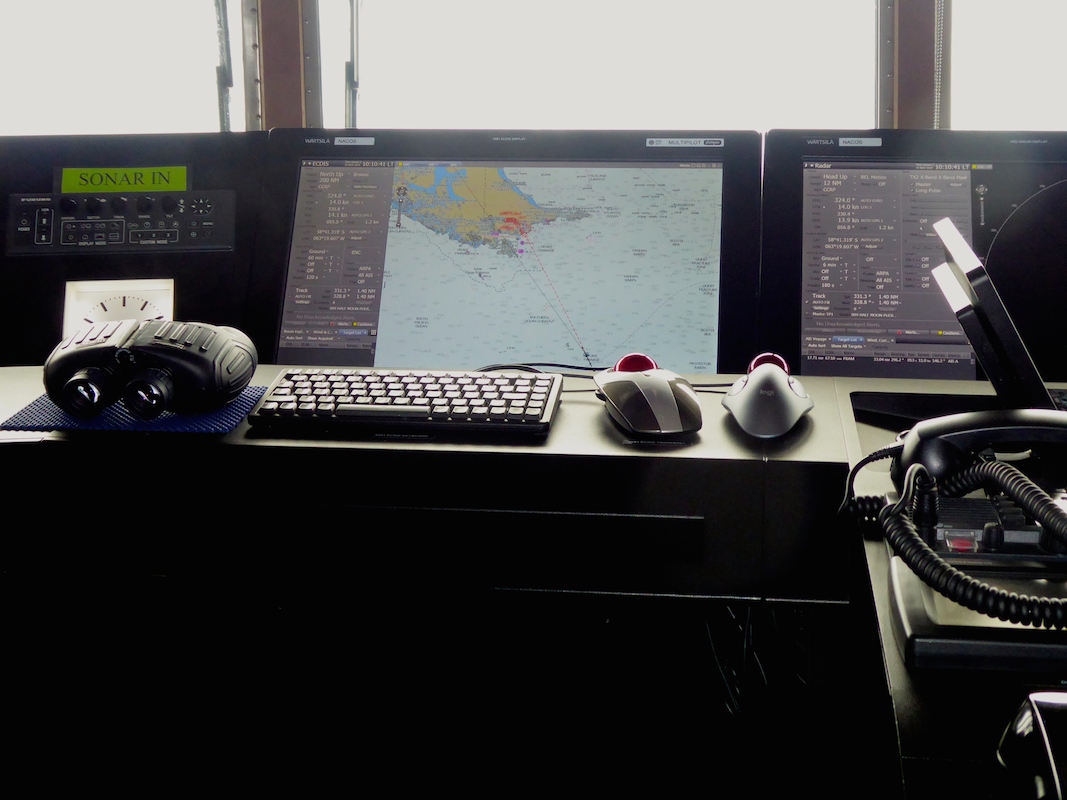 The ship has a series of five overhead screens, again like an airplane. Here they are:

I photographed the three central screens. Although I’ve had to reduce the image quality, perhaps you can make out what each screen is showing. It’s all very high-tech. 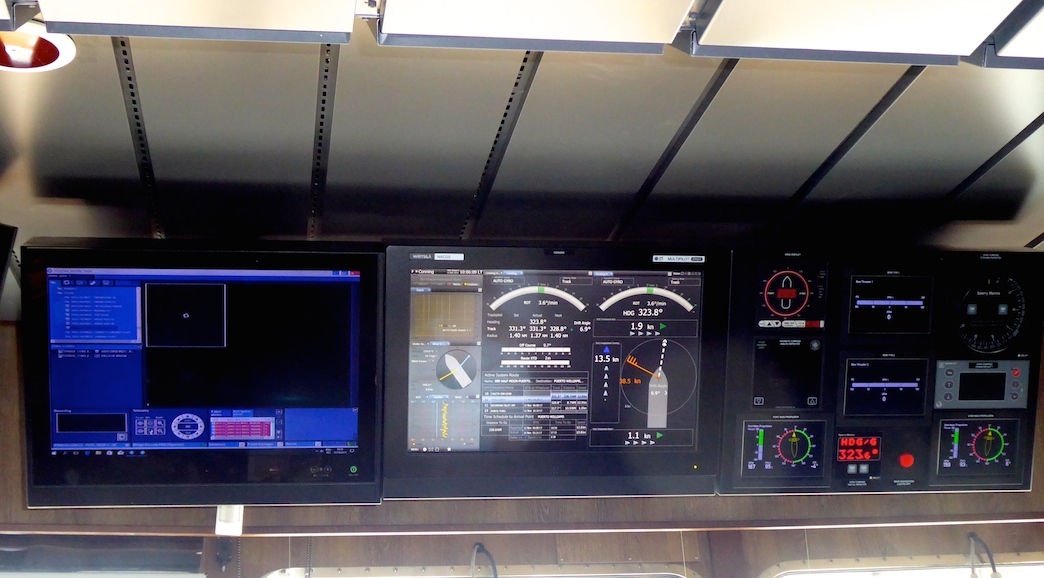 And here’s the main screen directly in front of the captain and co-captain’s desk, showing the plotted route. As you see, we were heading north towards Puerto Williams yesterday. 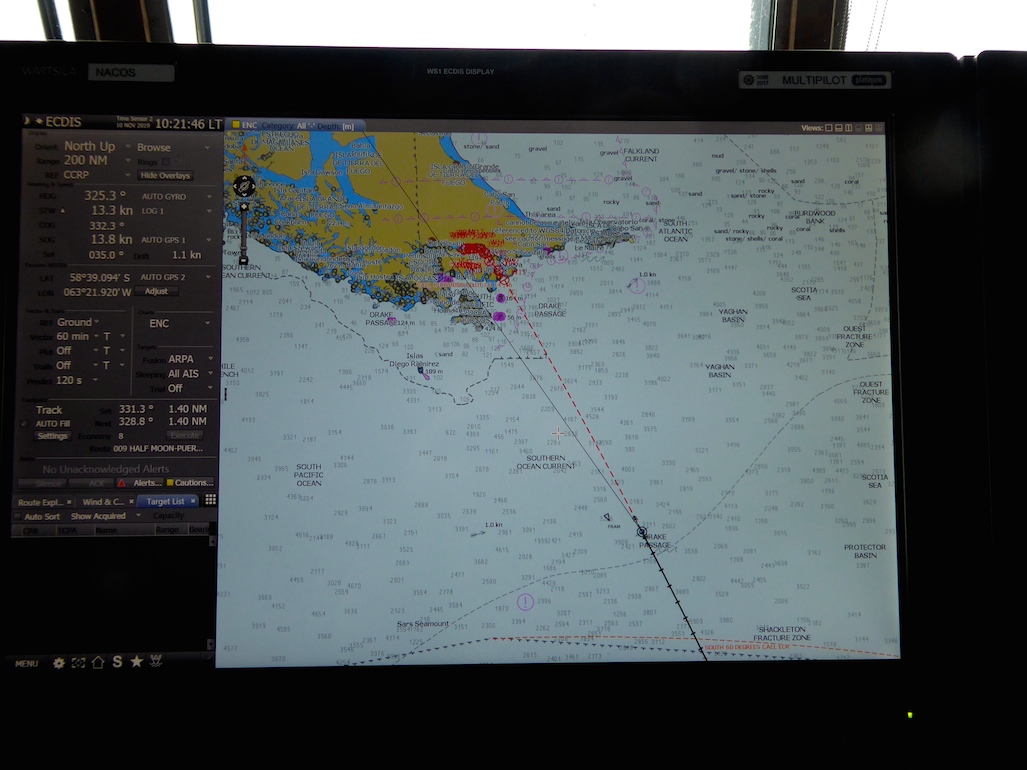 Finally, how much ice can this ship plow through? It’s designed to go through a meter of sea ice, but, as the captain said, “It’s easier to go around ice than through it.” Icebergs, made of tough glacial ice that’s compressed snow, are harder than sea ice and are best avoided, as we know from the lesson of the Titanic.

You can read more about this first hybrid cruise ship at this link.

We saw a humpback whale (Megaptera novaeangliae), though whale sightings have been rare on this trip. This one came close to the ship and spouted; I was lucky to get this shot because the sun was so bright I couldn’t see the view screen. I just pointed the camera in the general direction and pressed the button when I saw a spout. The ship’s captain identified it over the loudspeaker as a humpback.

It dove and disappeared shortly after I took the photo. This picture was pure luck. 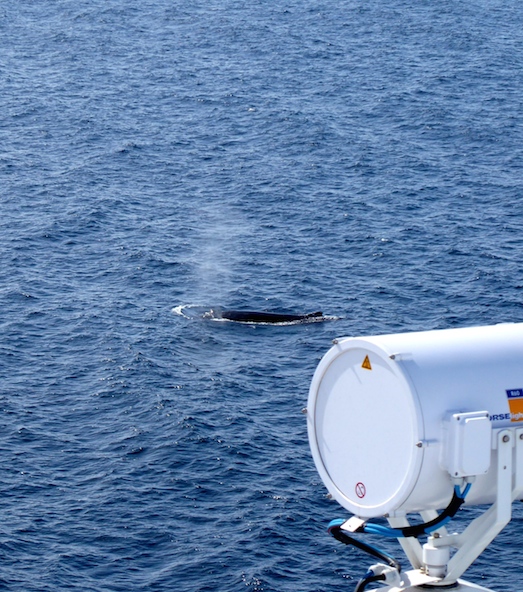 And a last photo of Antarctia. I’ll be back in a few days and will post more as I get time. 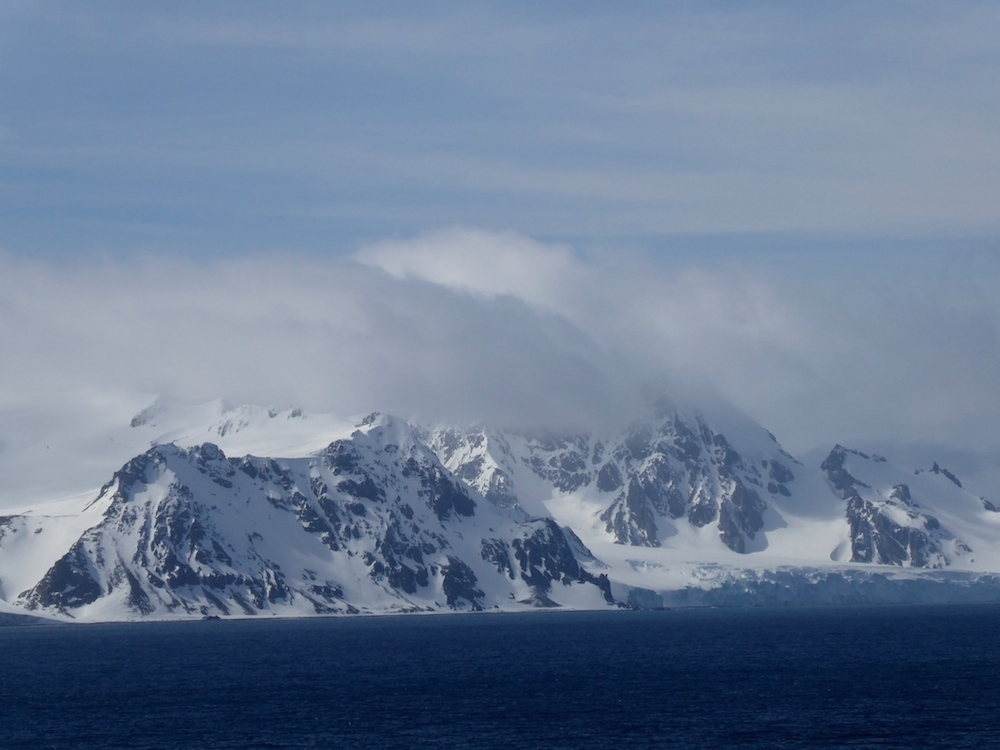 51 thoughts on “Travels: A visit to the bridge of the Roald Amundsen”