Hili is being a good scientist:

Hili: According to my research what I was looking for is not here.
A: And what now?
Hili: Further research is needed. 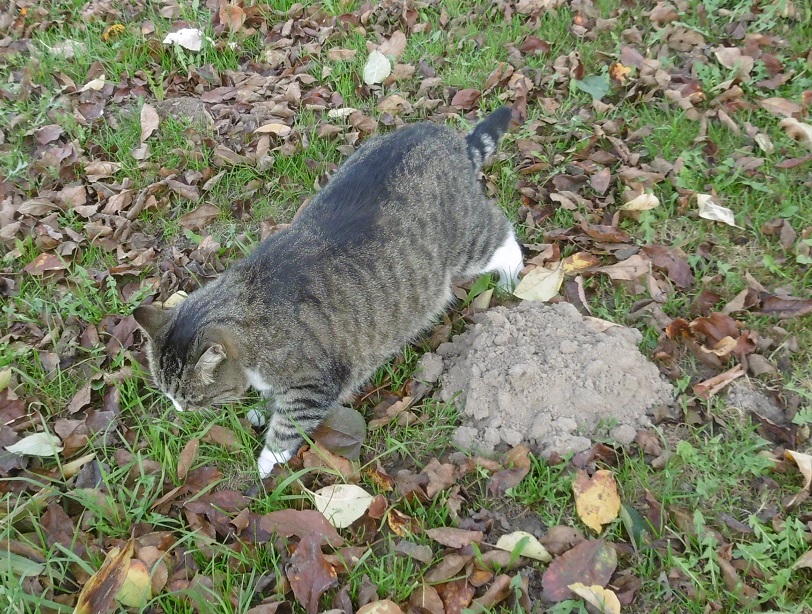 Duck report from JAC:  One of the Secret Duck Farmers reports a record number of ducks in the pond:

34 ducks for lunch. Lots of fussing and shoving and jockeying for position was going on at lunch. Most of the ducks hop up to the grass for chow, and some stay back in the middle of the pond and don’t come near me. I’m making a wild guess that the majority have been here before. Those could be our ducklings all grown up? Maybe?

It’s possible, but I’m hoping these ducks are fueling up before migrating south. 34 is a record number of ducks in a small pond in my experience. (They have, as one SDF suggested, read a Yelp review that Botany Pond has great accommodations and a free buffet.) The pond should freeze this week, and if the ducks don’t leave by then we’ll start discussing cutting their rations.
The farm rush-hour takes place at a site called Marsh Farm, but it is in fact the Caenhill Countryside Centre, a charity. More here. Anyway, this morning it is dry but muddy, and the animals are in a real hurry to get out – even the goat and the sheep (why Bumblebee the sheep is kept in the barn at night, and not in the field with the others, I don’t know).

Smudge the cat is very interested in the roses that are on the barn door, and then does some climbing:

On an alpaca farm, the rush hour is more sedate:

Male copperhead snakes having a standoff:

Can you tell me what these are and what they are doing? pic.twitter.com/DQkHwzkdhO

#OnThisDay in 1953, the polio virus is identified and photographed for the first time in Cambridge, Massachusetts. pic.twitter.com/YYGc8h6v7O

101 years ago today, the guns fell silent in World War 1. In the UK and the Commonwealth, the day is marked by wreaths of poppies, which grew ‘in Flanders fields’ despite the destruction, as the Canadian poet John McCrae put it in 1915. In Australia, something rather touching has happened.

A crafty pigeon has been helping itself to poppies placed on the Tomb of the Unknown Soldier at the Australian War Memorial and has built a nest in an alcove beneath a stained glass window. How touching this Remembrance weekend. #RemembranceDay pic.twitter.com/HL1DTLQMjd

12 thoughts on “Monday: Hili dialogue, farm rush hour and some on this day tweets”