I’m up early today, at 5:30 a.m. (late if I were in Chicago!), and the ship’s map shows the Roald Amundsen approaching Stanley, the capital of the Falkland Islands. It’s a very small capital, with a population of just 2,460 in 2016. In fact, the entire population of the Falkland Islands isn’t much larger: a total of 3,398. We should be docking at Stanley Harbor in about two hours.

Right now the Panomax camera shows us still at sea, with no land yet in sight. The weather is partly cloudy, but there’s no rain predicted, and, all in all, it looks like a good day to see King penguins. 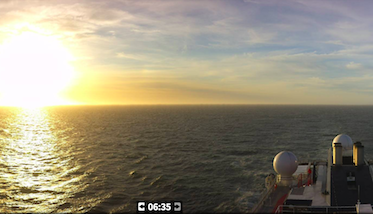 We were at sea all day Friday (and yesterday), but hove to for a couple of hours beside Elephant Island, a place famous in the annals of polar exploration. Later on that day we had a visit to the bridge, where I got some new pictures, including the ship-steering joystick (see tomorrow’s post).

First, here’s the view from my cabin window Friday morning as we cruised by several snowy and mountainous islands on our way to Elephant. I kept thinking that each of them was Elephant Island, not knowing that we’d actually stop the ship right beside that island. 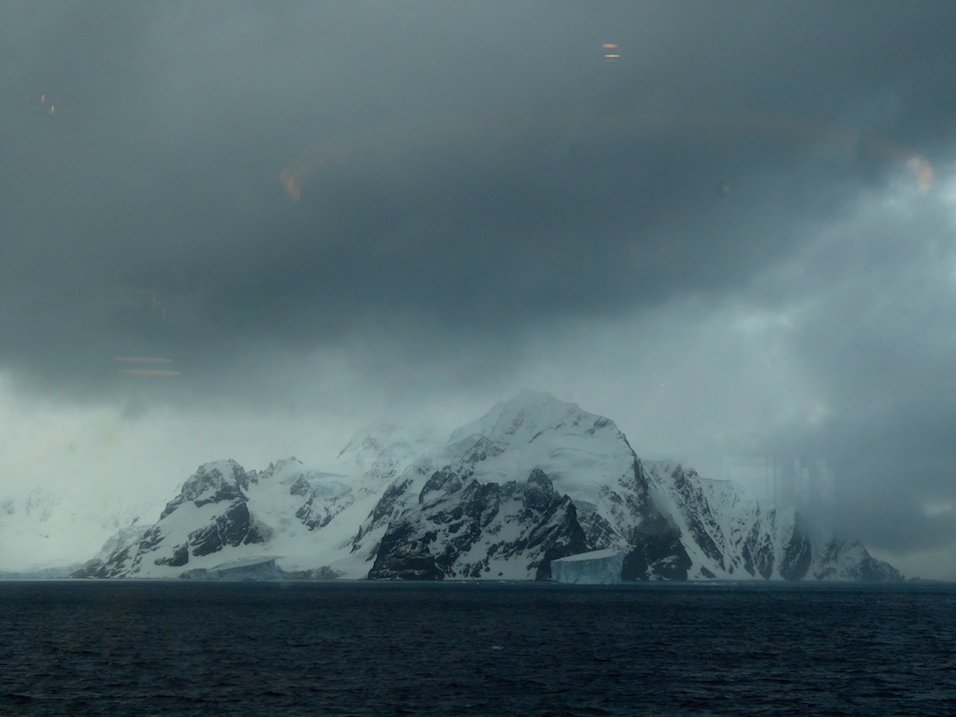 Two more views from the ship’s deck on Friday morning. I will miss this scenery when I return to Chicago: 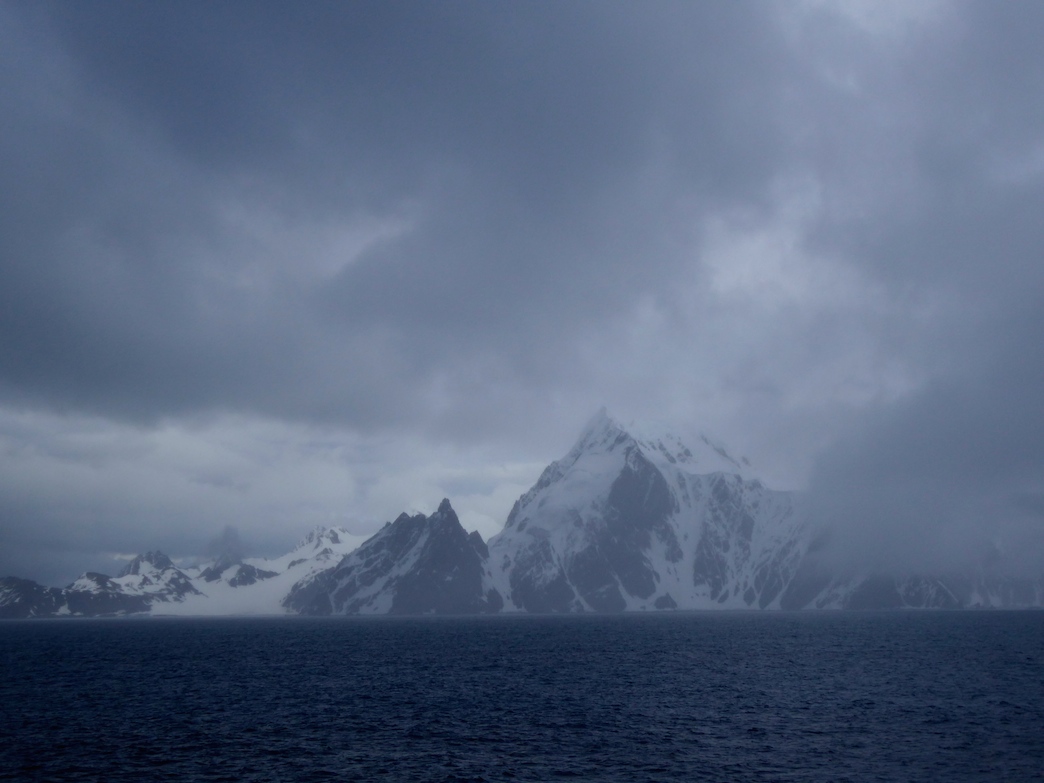 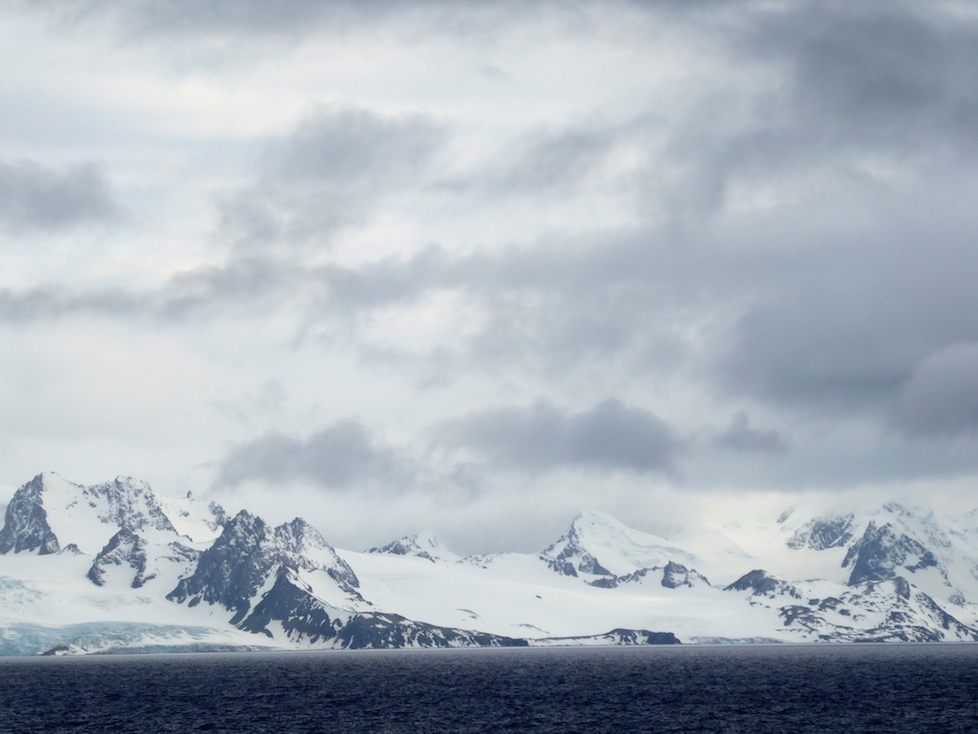 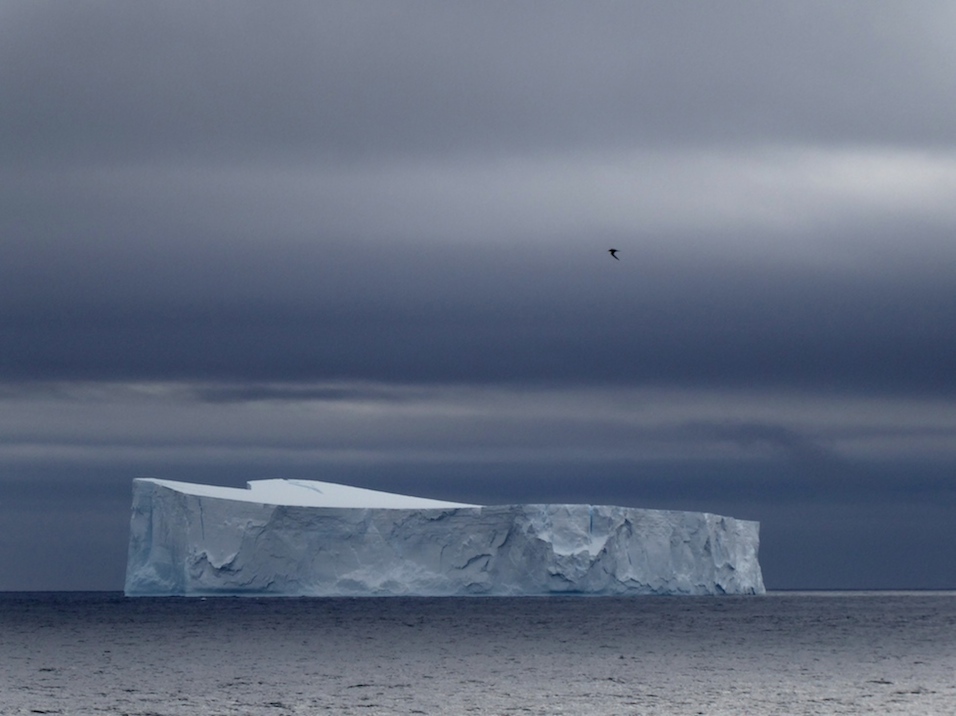 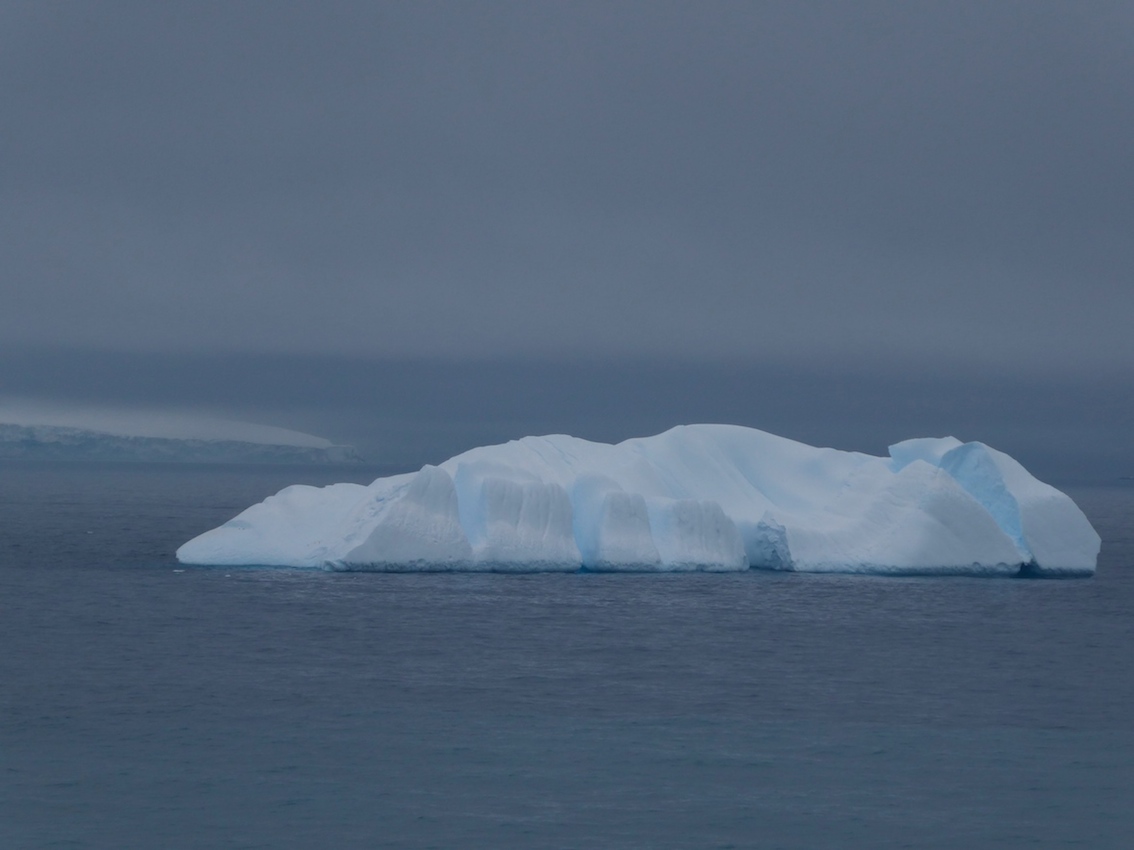 People had breakfast in the Aune restaurant, consuming the scenery along with their eggs: 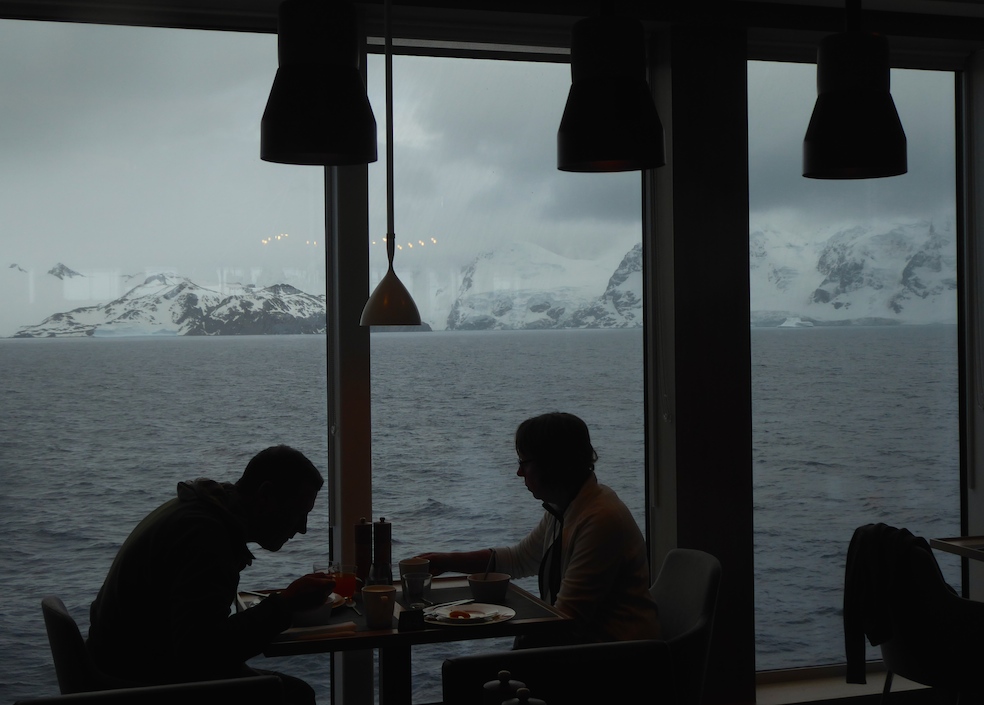 And in late morning we arrived at Elephant Island, described this way by Wikipedia:

Elephant Island is an ice-covered mountainous island off the coast of Antarctica in the outer reaches of the South Shetland Islands, in the Southern Ocean. Its name was possibly given by early explorers sighting elephant seals on its shores. The island is situated 245 kilometres (152 miles) north-northeast of the tip of the Antarctic Peninsula, 1,253 kilometres (779 miles) west-southwest of South Georgia, 935 kilometres (581 miles) south of the Falkland Islands, and 885 kilometres (550 miles) southeast of Cape Horn. It is within the Antarctic claims of Argentina, Chile and the UK. Brazil has a shelter on the island, Goeldi, supporting the work of up to six researchers each during the summer and had another (Wiltgen), which was dismantled in the summer of 1997/98.

The island is of course most famous as the site where 22 of Ernest Shackleton’s men, part of the ill-fated Imperial Trans-Antarctic Expedition, sheltered for four months in 1916, waiting for Shackleton, who took off for South Georgia island in a lifeboat with five other men, to bring them rescue. (Their main boat, Endurance, had been trapped in pack ice and then crushed.)

The men, sheltered in a makeshift hut fabricated from two lifeboats with a canvas cover, lived on the small beach below (arrow), dining mainly on the few penguins and seals they could catch (photo from AlaskaPhotoGraphics).

It was named for Frank Wild, leader of the party from Shackleton’s shipwrecked expedition which camped and miraculously managed to survive on the point for four months until rescued in August 1916.

A bust of Captain Luis Alberto Pardo, with a monolith and plaques, have been placed at the point to celebrate the rescue of the survivors of the Endurance by the Yelcho. The inscription reads:

“Here on August 30th, 1916, the Chilean Navy cutter Yelcho commanded by Pilot Luis Pardo Villalón rescued the 22 men from the Shackleton Expedition who survived the wreck of the Endurance living for four and one half months in this Island”.

Shackleton landed on South Georgia after a perilous but precisely navigated lifeboat journey of 14 days and 800 miles (1300 km). With two of the other four men, he then crossed the island’s mountain massif, an amazing feat in itself, to reach a whaling station on the east side of South Georgia.  Eventually, after picking up the two men left on the west side of South Georgia, Shackleton made his way to Punta Arenas in Chile, where he got a tugboat (the Yelcho, lacking any radio or heater, but commanded by the intrepid Pardo Villalón) to return to Elephant Island to pick up the 22 men who had lived there for four months. Amazingly, everyone survived.

Here’s a photo of the men building their shelter on Elephant Island. They camped on the beach, some distance from the mountain, to avoid rockfalls.

The lifeboat shelter on Wild Point: 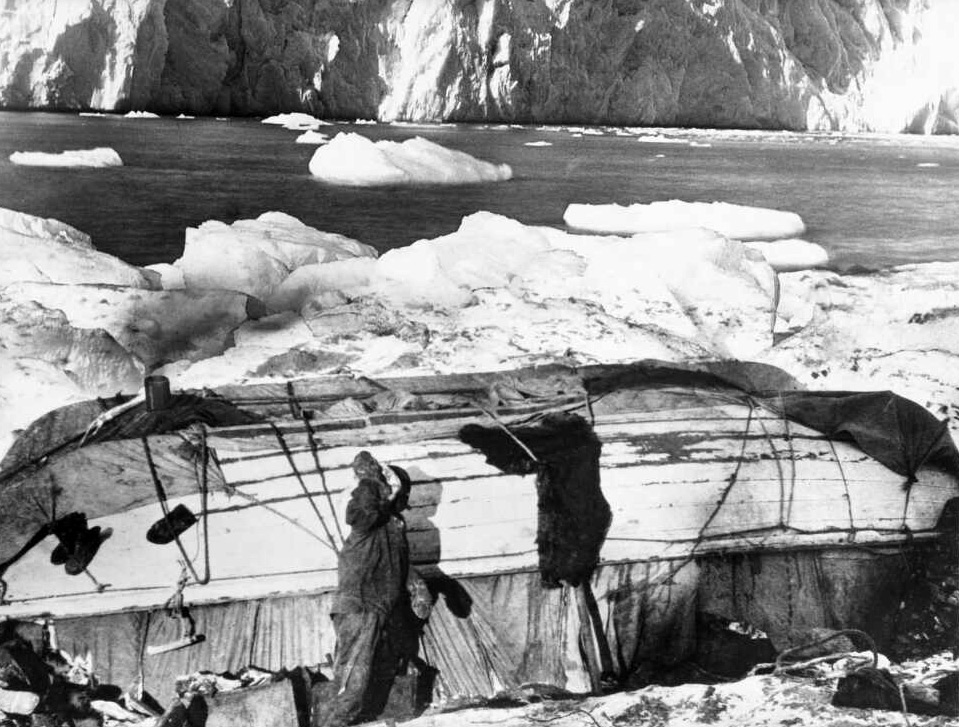 Here’s a drawing by expedition photographer Frank Hurley of the inside of the hut, which they called “The Snuggery”. Twenty-two men slept there for four months! And it was during the Antarctic winter, as they were rescued by Pardo Villalón and Shackleton on August 30, 1916. 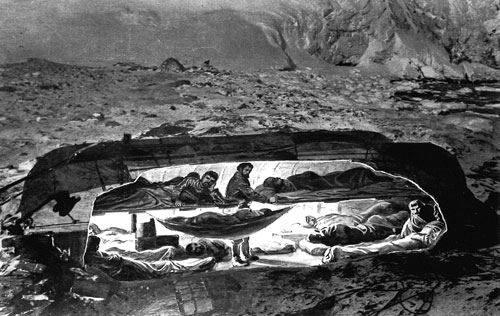 And so we arrived at Elephant Island and the ship stopped. Here’s a panorama of that forbidding place, showing the mountains and the glacier (middle). Point Wild is the barely visible rocky spit to the left, extending between the leftmost rock and the mountain to the left of the glacier.

Point Wild: not a very nice place to live for four months! 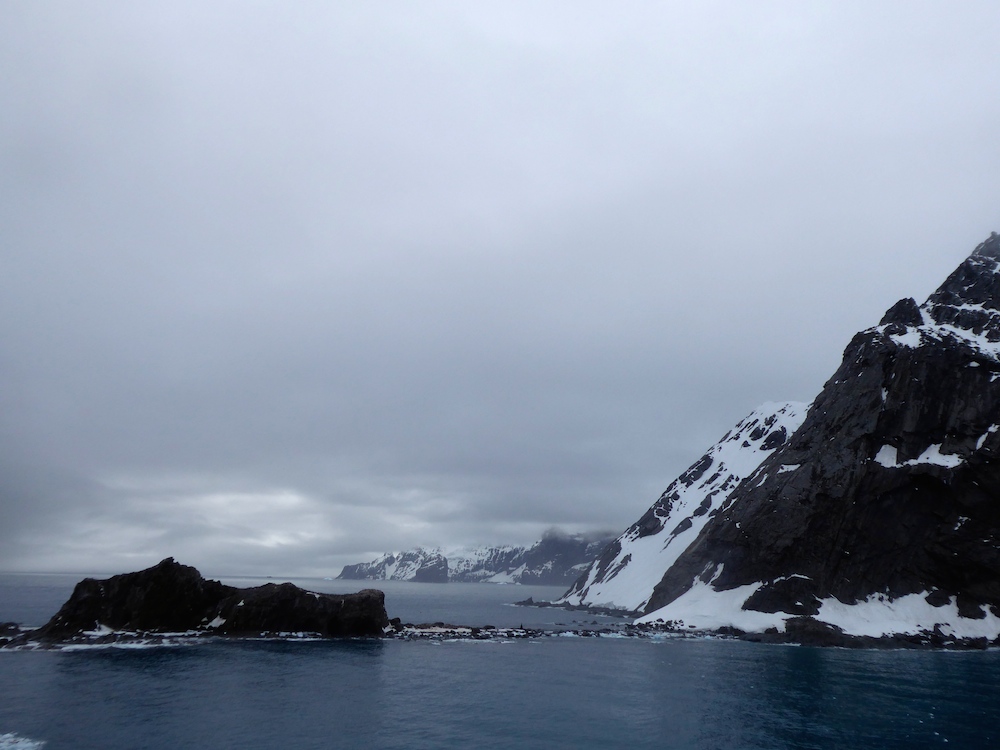 A closer view; you can see the statue of Pardo, apparently on the place where the men camped. 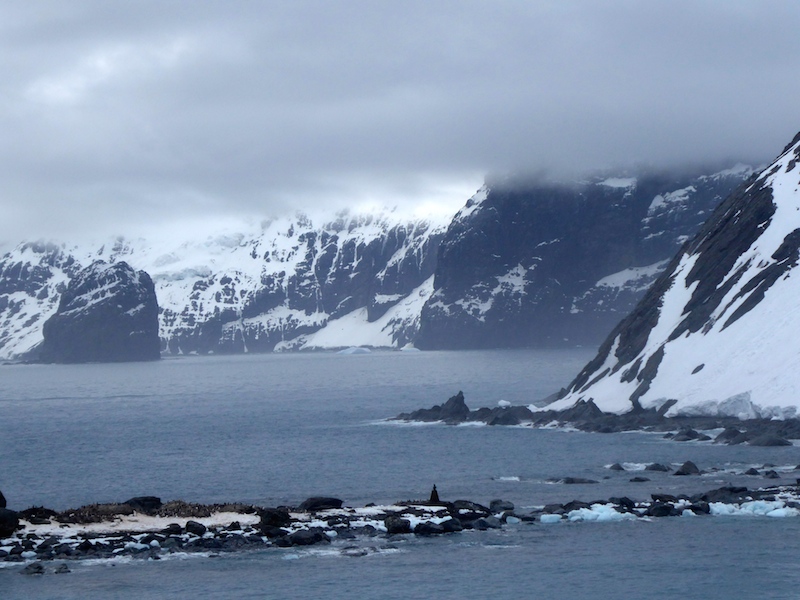 Even closer. It’s a forbidding place, but note the penguins, probably gentoos, huddling around Pardo’s statue: 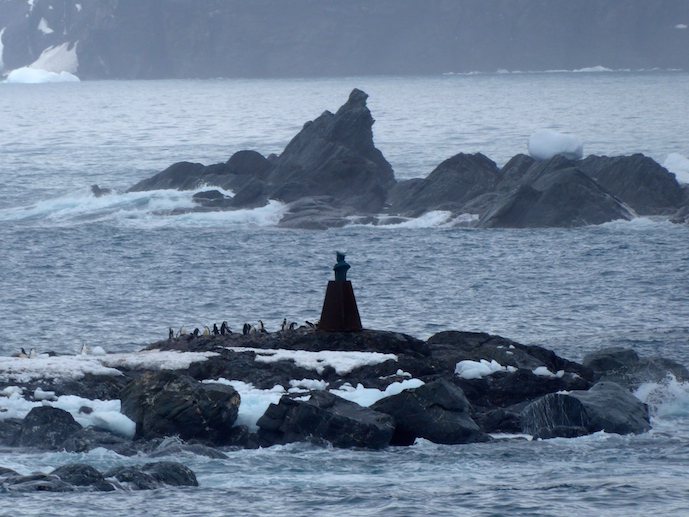 A better view of Pardo’s memorial and the gentoos, taken from Wikipedia: 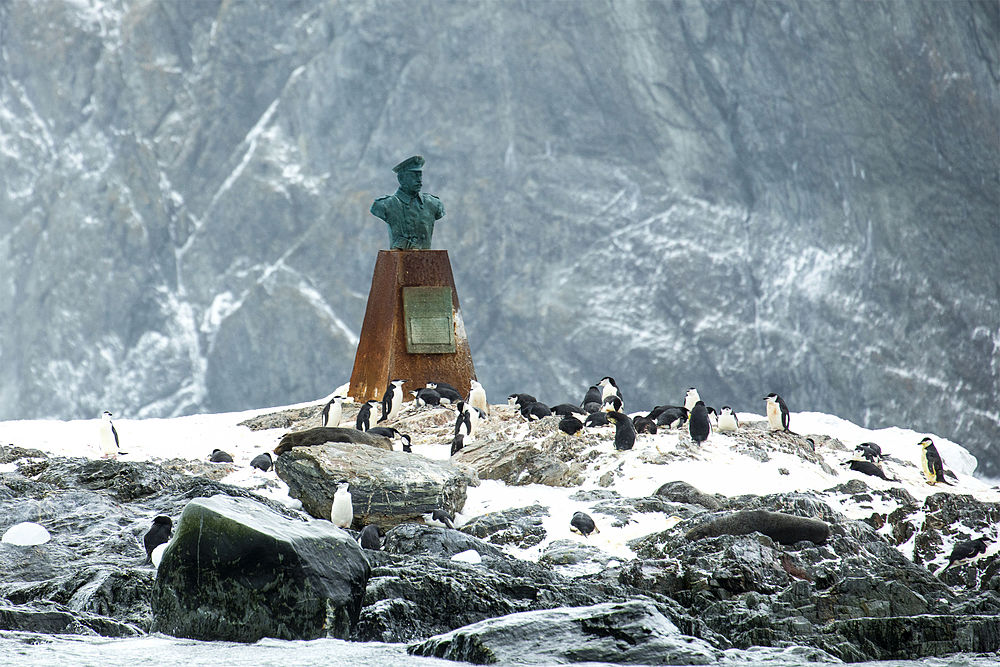 A panorama of the nearby glacier:

This glacier clearly showed the the fissures that would produce calved-off icebergs: 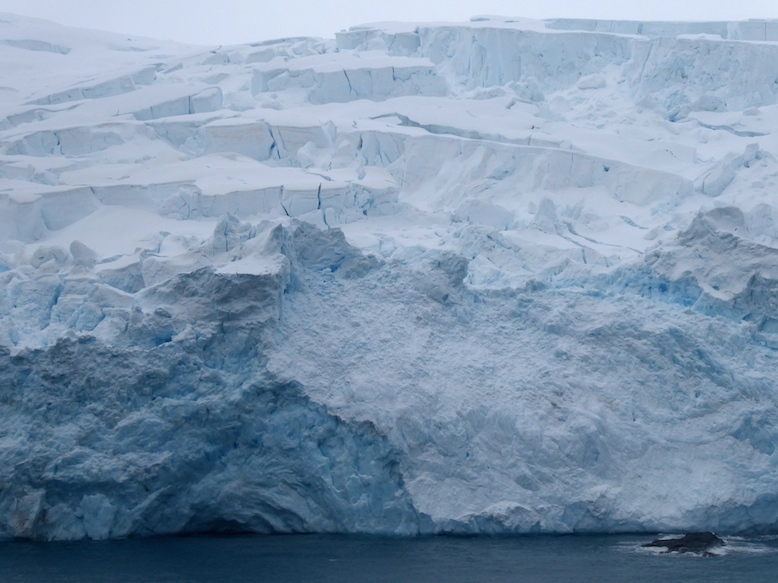 There were no big bergs nearby, but plenty of floating bits of ice. Point Wild is to the right. 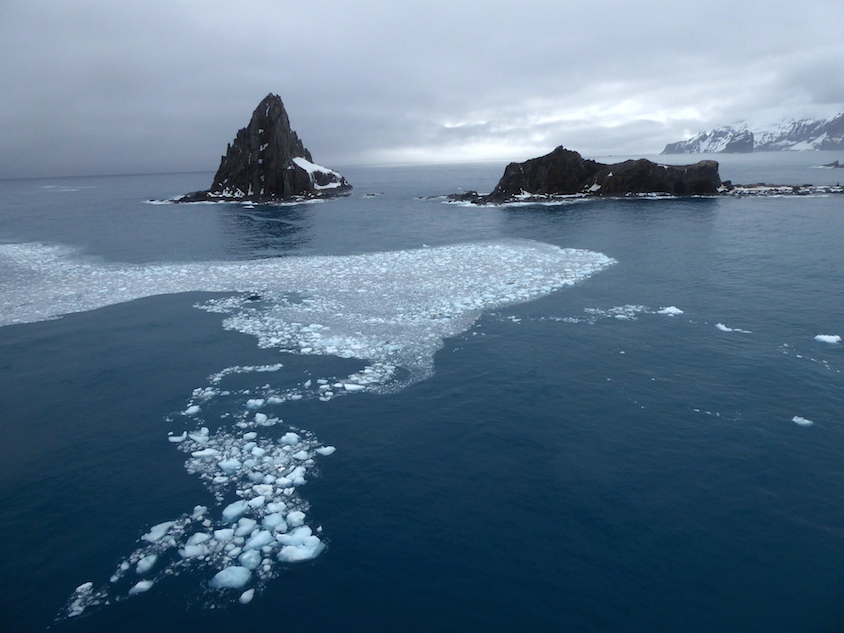 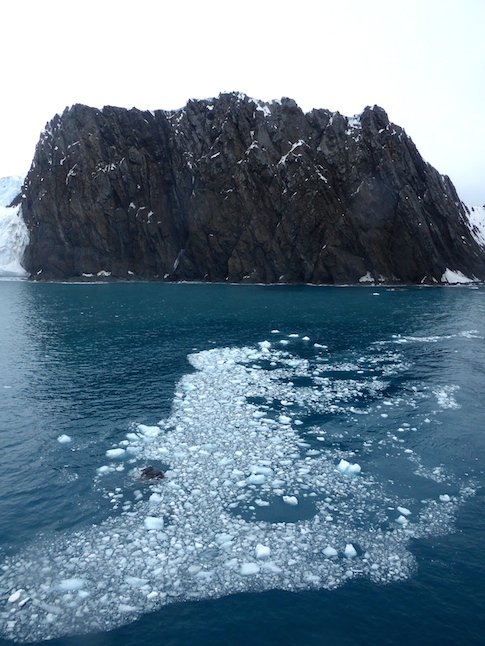 A close-up of the ice bits, which looked like a painting: 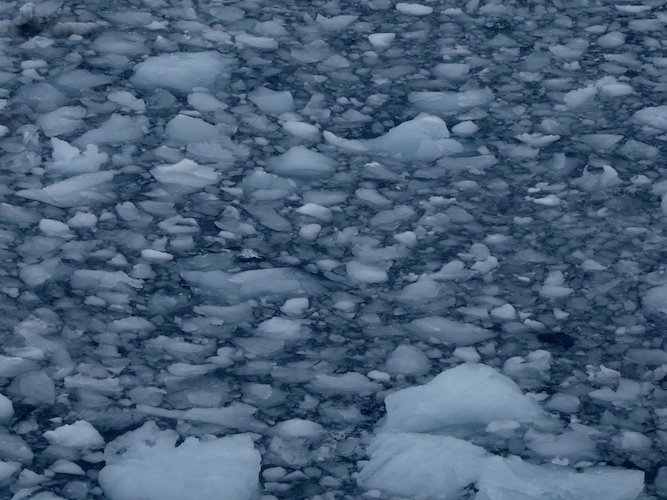 While we moored at Elephant Island, a snowy sheathbill (Chionis albus) landed on the ship’s radar, apparently trying to eat a speck of bird poop. Sheathbills will eat anything, but particularly love penguin poop.

This species is the only landbird native to the Antarctic continent. 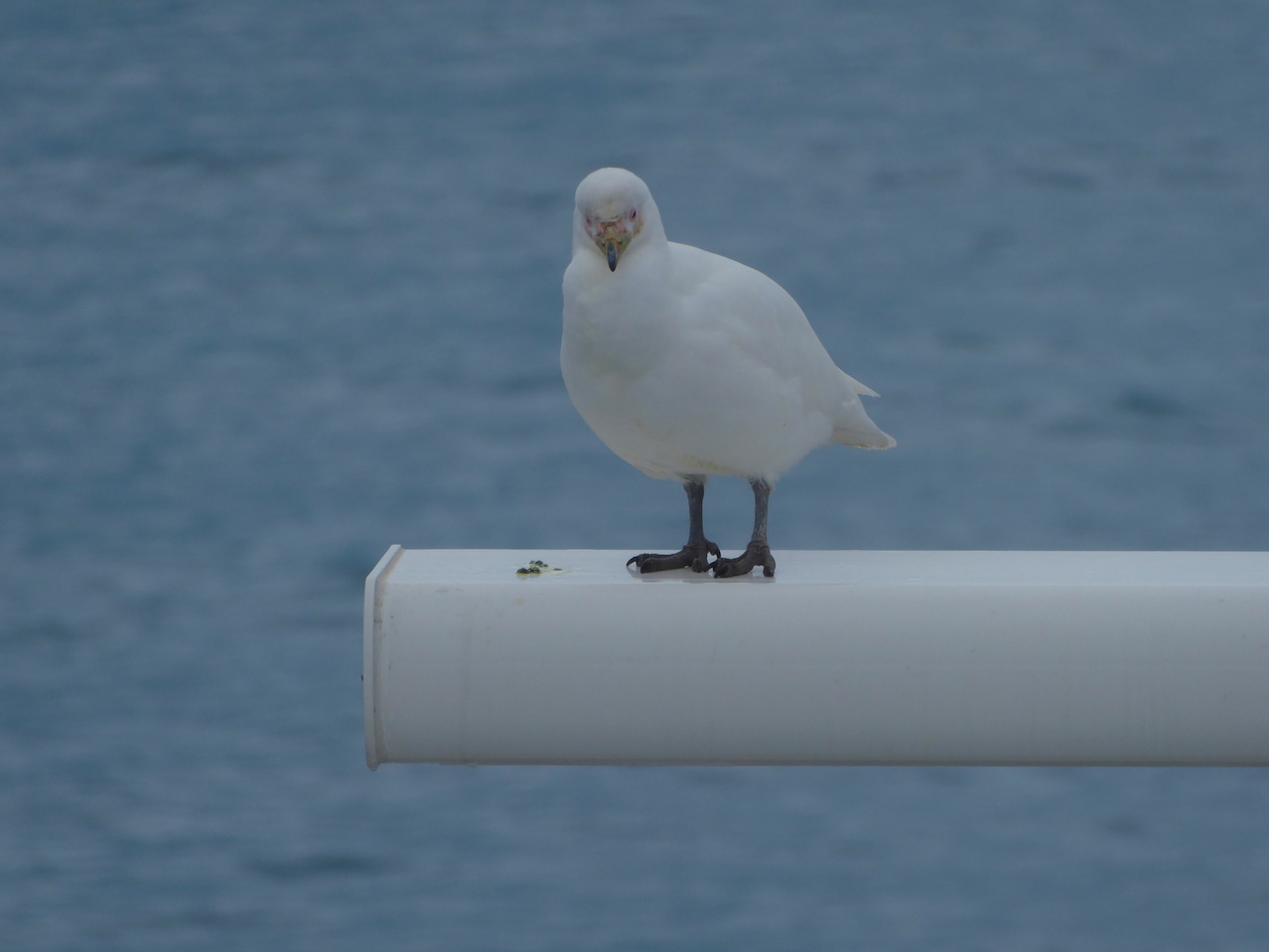 As we left Elephant Island, I had a view of Point Wild beach right out my cabin window. And I couldn’t help thinking of the contrast between my well-fed and cosseted existence aboard ship and the life of the men who lived on that unforgiving beach for four months. How they would have welcomed the warmth, a hot shower, and a meal of roast beef instead of penguin! 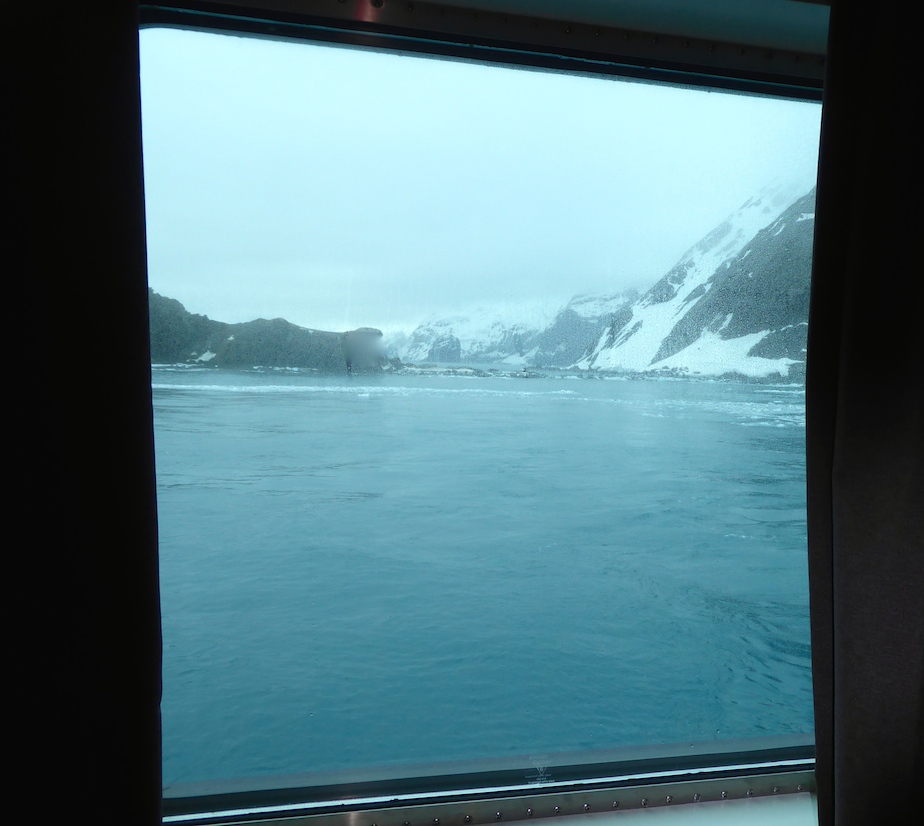 Later in the day we visited the ship’s bridge, which I also did on the last trip. But this time I have new photos as well as a closeup of the device they use to steer the ship manually. More on that tomorrow, and perhaps some photos of King penguins!

12 thoughts on “A pilgrimage to Elephant Island”