UPDATE 2:  Ms. Sheepshanks has commented below and has verified that she is indeed a real person bearing the name she wields so proudly. Her remarks are in the thread after comment 11. And if she reads this, I urge her to keep writing in this vein and with that critical acumen. (She’s now made several comments.)

UPDATE 1: After doing a bit of sleuthing about Octavia Sheepshanks online, I wonder if that’s her real name (see here, for instance), though that may really be her name and she pretended while at Cambridge that it wasn’t.  Regardless, whatever real person wrote the article was serious, humorous, and should write more.

Seriously, people, I get no pleasure from calling out wokeness (even using that word gets me excoriated), for along with that comes opprobrium from the ideologically pure. Even worse: I feel awful that academia, and especially biology, is being distorted and corrupted by ideologues.

One of the examples I used at the Stanford free-speech conference was the inability of people to recognize that, biologically, there are only two sexes in humans. Just two. In our species sex is effectively binary, with only a tiny handful of people who are “intersex” (these exceptions constitute about 0.018% of the species, or about one person in 5600).  Sex is not gender, for the latter is a true social construct because there are far more sex roles or sexual identities than two, although even gender is bimodal, with most people identifying as traditional male or female. A frequency plot of sex would look like two huge lines, each about 50% of the population, with one of the lines at “male” and the other at “female”, and a few almost invisible blips between those lines. A frequency distribution of gender would look more like a bactrian (the two-humped camel), with more intermediates. But the humps would be high.

Enough: I’ve written about this before. At least biologists recognize that humans have two sexes. Or so I thought, until I encountered this article in The Critic by Octavia Sheepshanks, a freelance writer).  It’s leavened with humor but makes a serious point: New Scientist, the British equivalent of Scientific American (that is not praise), is now removing the words “women” and “woman” from its articles about advances in science, even when the original papers did use the w-words. (For some reason the magazine is not cutting back so much on the words “boy,” “man” or “men”, and given the ideological underpinnings I find this disparity puzzling.)

In other words, New Scientist is bowdlerizing language, presumably in the interest of illiberal left-wing ideology. I trust by now that I don’t have to explain to readers why this ideology won’t use the word “woman” when referring to biological females. (Oh hell, I guess I’d better for new readers: it’s because of the trans-activist mantras that “trans women are women” and “trans men are men”.)

Note that New Scientist has no problem with males and females in other species, like sheep. It’s humans where they bridle, and we all know why.

Anyway, Sheepshanks wrote a good piece, and it’s funny in places. I’ll give you a long excerpt, but her arguments for retaining the w-words are more extensive, and you should read those in the original piece. The bold headings are mine:

I assumed that New Scientist was doing what it had always done: synthesising and disseminating research findings in a way that was easy to understand, situating them in the context of the real world. It describes itself as “a trusted, impartial source of information about what is going on in the world, in a time where facts are in short supply”, and I had believed this without reservation. It was the voice of reason in my life. After reading one article in which miscarried male foetuses were given a sex (“boys”) but the women who had suffered miscarriages were not (“pregnant people”) I wrote a long and passionate letter to the editor about how it had made me feel (not good). I received no reply, and I began to wonder if my strong belief in the significance of sexual dimorphism in humans was inaccurate and hateful after all. This was the most popular weekly science publication in the world, and it was reporting science as it was. I must be the problem.

Then I encountered the most befuddling article yet. A new form of contraception “for people” had been discovered. After a minor brain adjustment, I established from the sentence “a gel that is applied inside the vagina has been shown to block sperm injected into female sheep”, that this was a new contraception for women. The article was so strange to read that I sought out the original journal article to witness this bizarre wording in situ. When I read the first sentence of the abstract, “Many women would prefer a nonhormonal, on-demand contraceptive that does not have the side effects of existing methods”, I was astonished. Science had not changed; New Scientist had. It had lied to me. (Gaslighting is an overused accusation but resonates here. I intend to avoid one-sided love affairs with magazines in future.)

Note that the “original article” she’s referring to is the Science article highlighted by New Scientist. Note that NS gladly admits that there can be female sheep, but the equivalent in H. sapiens is, well, “people.” People with vaginas. “Female” is mentioned only once in the article, referring to sheep with vaginas, and “women” not at all. Sheepshanks was onto something. As she dug deeper, she found more bodies.

I looked back at all the New Scientist articles that had confused me and found the original publications. They had been altered, too: every time only women or men (i.e., males or females) were being referenced, they said so, in stark contrast to New Scientist’s interpretation.

Essentially, New Scientist is blithely misreporting published research to remove any implication of two sexes in humans. Presumably the purpose of these scientifically inaccurate linguistic gymnastics is to include those with alternative gender identities without causing offence. New Scientist has yet to respond to a request for comment, so I can’t be sure.

Sheepshanks’ take on why it matters (I love the name “Octavia Sheepshanks”, and note that it was the reproduction of female sheep that got her going):

Why does it matter if New Scientist is doing this? Perhaps an alien happening across the publication would class humans not with other mammals but with snails and slugs, merrily churning out children all by themselves. Most readers are human and can work out for themselves which sex is being referred to, however. If certain language choices make some people feel happier and safer (again, I can only assume that this is the goal) why ignore this in the name of accuracy?

There is nothing trans-inclusive about pretending humans are a hermaphroditic species. If we were, trans people wouldn’t exist. Perhaps New Scientist, if it wants to include trans people in future(for example, trans men in a study on female contraception) could do so by writing about them? Just a suggestion! Accuracy does not have to mean using the words “women” and “men” — “males” and “females” would include those with all gender identities, including non-binary people.

The alteration of scientific studies to avoid naming the demographic previously known as “women” has serious consequences for anyone female. Returning to the example of the new form of contraception for women, New Scientist’s wilful misinterpretation ignores the positive consequences of the study for women globally, because it cannot name the group it is discussing. These consequences — social and economic liberation through reducing the number of unplanned pregnancies — are discussed in the original paper, which I found fascinating and enjoyed reading. Meanwhile, New Scientist contents itself with informing us that researchers “inserted the gel towards the backs of the vaginas of sheep, which are similar to those in humans”. New Scientist was founded in 1956 for “all those interested in scientific discovery and its social consequences”. Now, female readers interested in studies affecting themselves must read the original academic papers to gain a full picture.

When the same approach is used with studies concerning only men, women are still adversely affected. . .

Read the original to find out why. But I like the fact that Ms. Sheepshanks can write a piece that’s deadly serious while still keeping a sense of humor.  But of course she’ll still be labeled as a transphobe. I get the feeling that she doesn’t care.

Here’s her ending, which is great [note that “gonochorism” describes a biological system, as in humans, in which a species has only two sexes and every individual is a member of only one of those two sexes].

I look forward to a day when I have a place to read about the physical and social implications of research into women’s bodies and health, without limitation. In the meantime, I note that New Scientist remains happy to acknowledge gonochorism in other animals; it recently rejoiced over a study of female robins that discredited the sexist theory that only male robins sing. Maybe I’ll support the liberation of female songbirds until I can read about my own species. In fact, if there’s a rally for feminist robins, I’ll be there with a placard the size of my thumbnail, desperately seeking a new safe haven of sanity.

I don’t read New Scientist regularly, so I don’t know if it has a plethora of bad articles. But it has certainly been unscientific in the past. Here’s the most egregious example, which I wrote about in 2020: 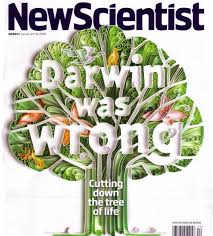 But there have been quite a few other missteps in this journal, and I’ve called the venue out more than a few times (see here).  Imagine if Scientific American merged with New Scientist.  The result would be the scientific equivalent of The Onion!