All the contributions today come from reader Ginger K. First, a story from I Heart Cats about how the University of Nebraska at Lincoln takes care of its feral moggies. Click to read:

Like many college campuses across the country, the University of Nebraska-Lincoln had a feral cat problem.

In 2008, a band of faculty and staff created the volunteer group, Husker Cats – named for UNL’s mascot, the Cornhusker. The project has managed to reduce the on campus feral population from over 100 cats down to less than 70 through humane Trap/Neuter/Release and foster/adoption programs.

Instead of rounding up the cats and attempting to make them someone else’s problem, UNL embraced the population by creating feeding stations and cat houses for shelter across campus.

The administration recognized that the cats offered more than just an opportunity to do some good; they offered a wonderful chance for students to learn about compassion and civic responsibility.

This is how many cats show us they love us. They watch for us and wait for us, every day. We look for them and they look for us. No head butts, no belly rubs— just faith. That’s love too. 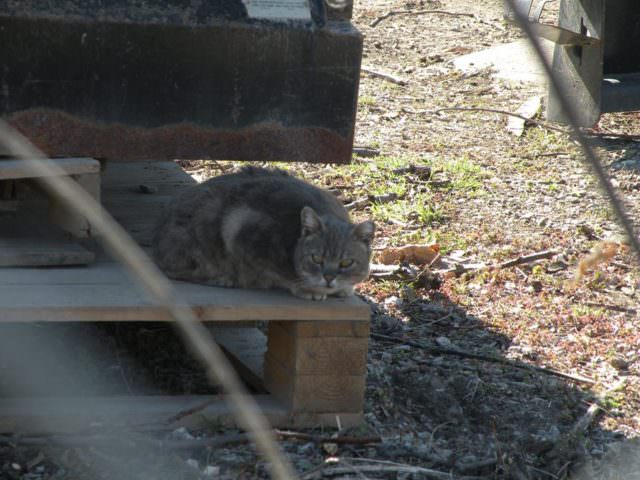 The original goals of the program were to stabilize the population through trap and release, place kittens into foster care and permanent homes, provide food, shelter and veterinary care to the colony cats, and reduce the feral numbers to a healthy, non-reproductive state within 5 years. All this while maintaining the beauty of the campus.

It was a very ambitious plan, but the Husker Cats volunteers made it happen. Today the kitties are as much a part of campus life as dorm rooms and cafeteria food – embraced by faculty, staff and students alike.

Ginger said this about these other I Heart Cats articles: “Good news about kittehs in dangerous places.” (Click screenshots to read).  You probably know that Ernest Hemingway’s home in Key West, Florida, is populated by many polydactylous cats (“Super Scratchers”). These are descendants of a cat that Hem staffed. The Hemingway Museum site notes:

Ernest Hemingway was given a white six-toed cat by a ship’s captain and some of the cats who live on the museum grounds are descendants of that original cat, named Snow White. Key West is a small island and it is possible that many of the cats on the island are related. The polydactyl cats are not a particular breed. The trait can appear in any breed, Calicos, Tabbies, Tortoise Shell, White, Black, etc. They vary in shapes, sizes, colors and personalities.

And a photo of Hemingway’s son Gregory with Snow White: 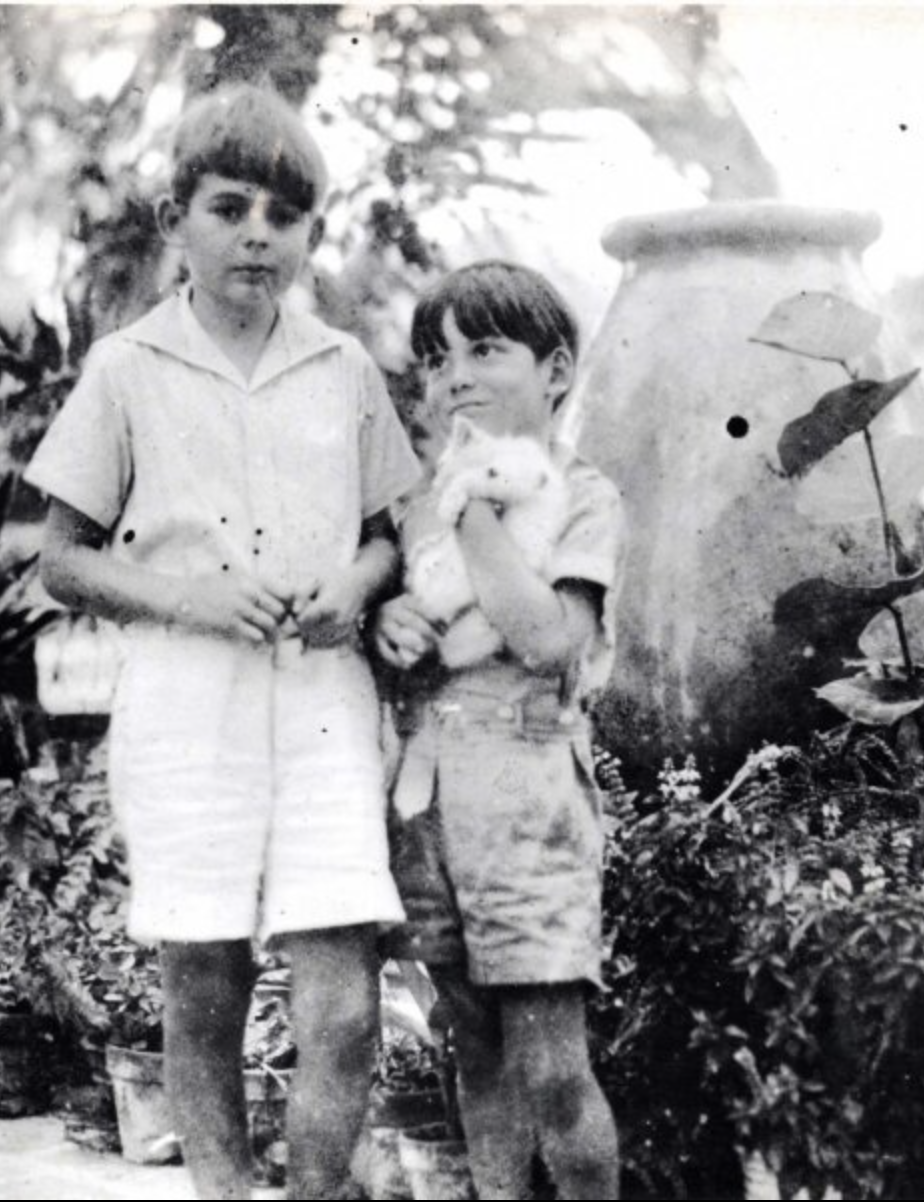 The following article gives the good news that the Super Scratchers at the Hemingway Home survived Hurricane Ian in late September of this year. Click to read:

Whenever a hurricane approaches the Hemingway Home and Museum in Key West, fans worry about the 60 polydactyl (six-toed) cats living on the property. Luckily, there are lots of dedicated staff members who do what they can to keep the felines safe.

When Hurricane Ian approached Key West, Florida, many people worried about the safety of the six-toed cats. Like during Hurricane Irma, some staff members chose to stay behind with the cats and protect them from the storm. Now that the storm has passed, the attraction has shared an update on the beloved felines.

All the cats at the Hemingway House are descendants of Ernest Hemingway’s first six-toed cat named Snow White. As a tradition, every cat has been named after someone famous.

There are about 60 cats currently at the attraction, and all of them carry the polydactyl gene. Yet, only about half of the cats physically have extra toes. Most cats have five toes on their front feet and four on their back feet, but cats with this gene can have extra toes and give birth to cats with extra toes.

As Hurricane Ian approached Key West as a Category 4 hurricane, the famous author’s granddaughter, Mariel Hemingway, was worried the building would be destroyed. She said if any of his houses were damaged, it would be heartbreaking.

Mariel normally advises the staff members to evacuate with the cats, but once again, a few people stayed behind with the cats instead. The building’s strong structure protected the humans and cats from Irma, so everyone was hopeful that the same would be true during Ian.

According to Alexa Morgan, a representative of the Hemingway Museum, the building faced minimal damage during Hurricane Ian. All the cats are doing well after being kept in a safe shelter space with the humans.

The staff members are currently cleaning up the debris left behind by the hurricane. However, they didn’t let the storm hold back their business. The attraction closed on Wednesday while the hurricane hit, but it resumed operations the following day.

The six-toed cats are in great shape because many people cared about their safety. All the felines have returned to their regular routines. They will continue to roam the Hemingway Home and Museum, so if you’re visiting Key West, consider stopping by to see them.

When Russia’s invasion of Ukraine began, people had to quickly find ways to escape and keep their families safe. Sadly, many had to evacuate without their pets due to travel restrictions. One 10-year-old girl was especially devastated when her family traveled to the U.S. from Ukraine without her feline by her side.

The girl had trouble sleeping every night as she wondered whether she’d see her cat again. When her mom saw how devastated she was, she began to ask others for help. Soon, a group of volunteers stepped up to reunite the cat with his family, but it was a long and tedious journey. 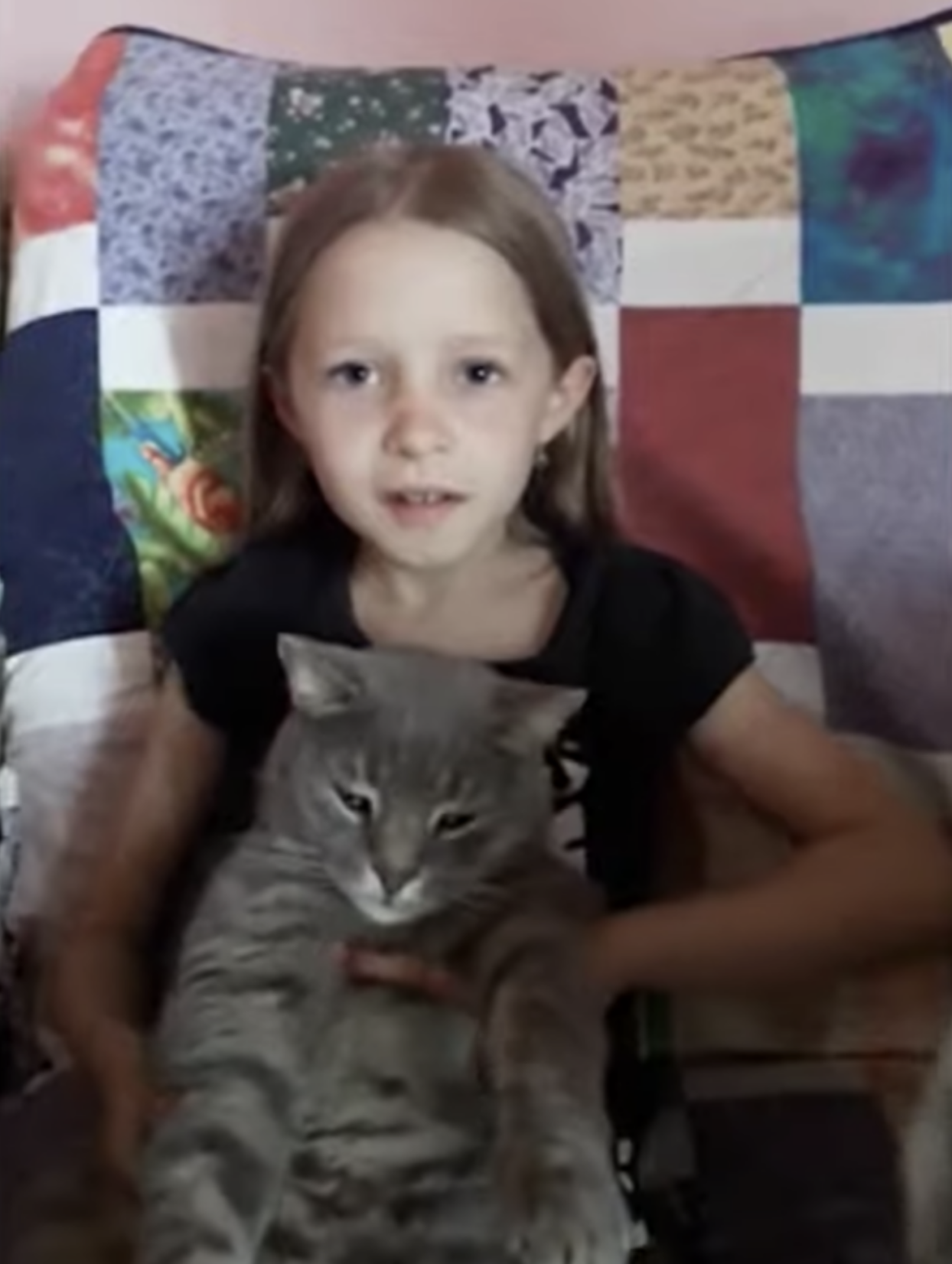 10-year-old Agnessa had to part ways with her cat named Arsenii when the war in Ukraine began. Her mom, Maria, left the cat with her brother-in-law in Ukraine as she traveled to the United States with her family, including her three daughters, their father, and their grandmother. Agnessa is the youngest child.

The family, known as the Bezhenars, made it to safety because of a kind man named Geoffrey Peters. Peters wanted to travel to Ukraine to help people evacuate, but when that didn’t work out, he realized he could help people from his home. His son had been planning to rent out a house in California, but instead, he agreed to donate it to the Ukraine family for two years. 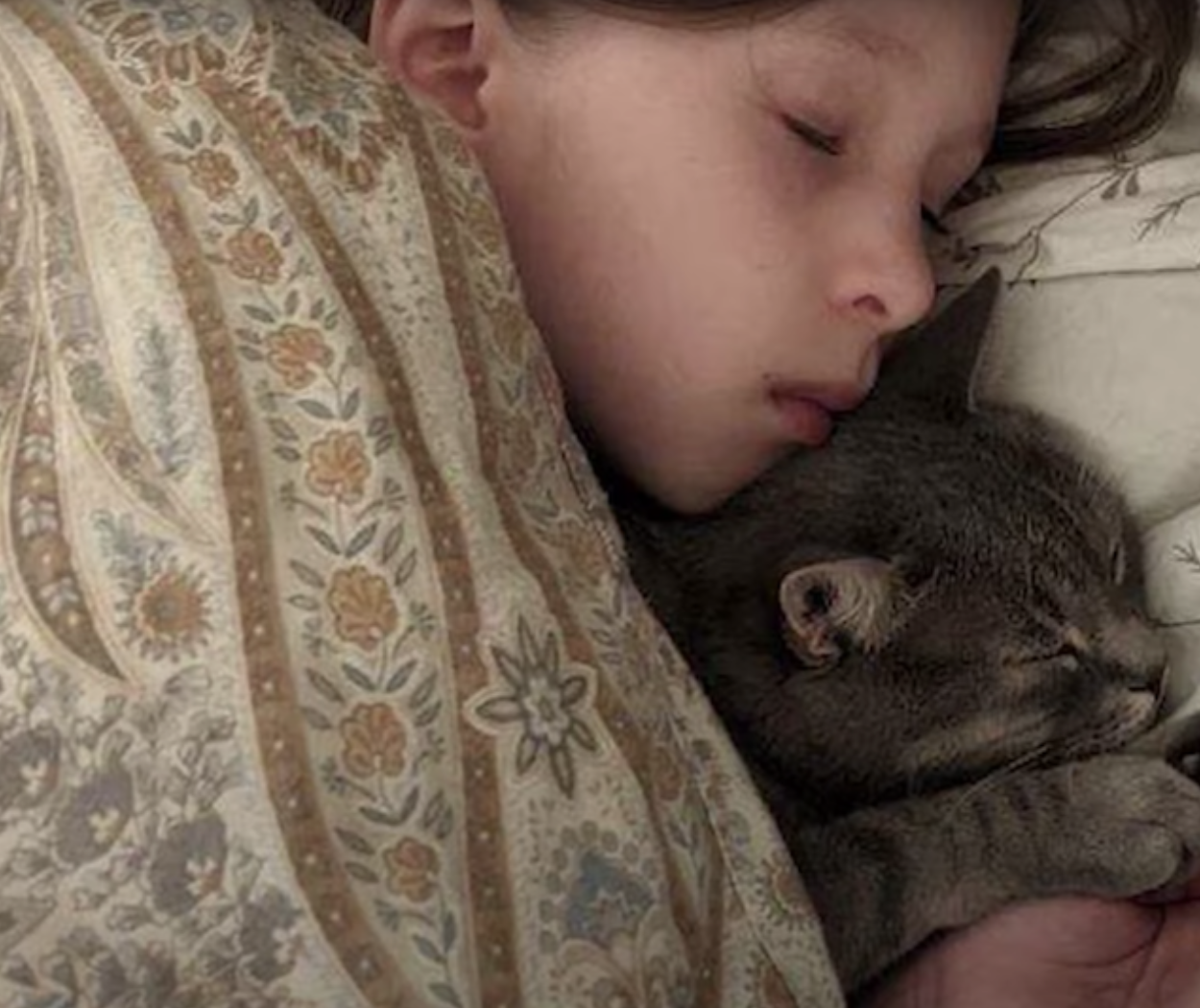 The Bezhenars are planning to stay in America and begin their new lives. But without Arsenii, Agnessa was having a difficult time adjusting. She was losing sleep and couldn’t stop worrying about her furry friend.

During the flight to America, Maria bonded with their flight attendant, Dee Harnish. After the family got settled, Harnish checked in on them and found out how heartbroken Agnessa was without her cat.

So, Harnish got in touch with another flight attendant, Caroline Viola, who rescues animals. Soon, many volunteers stepped up to help Maria’s brother-in-law get the cat from Ukraine to the United States. He needed to ensure Arsenii was vaccinated and had the proper paperwork to fly.

Arsenii went through several rides to get to a temporary family in Romania. Once he had all his documents, volunteers sent Arsenii to Greece, where he was able to fly home with a kind volunteer who was on vacation. When the volunteer landed at her home in Washington, the Bezhenars traveled there to reunite with their beloved feline.

Arsenii on the way home. What a wonderful pair of flight attendants, and kudos to them and the other recuers. Here’s one of them, Mimi Kate, who cut her Greek vacation short to help Arsenii: 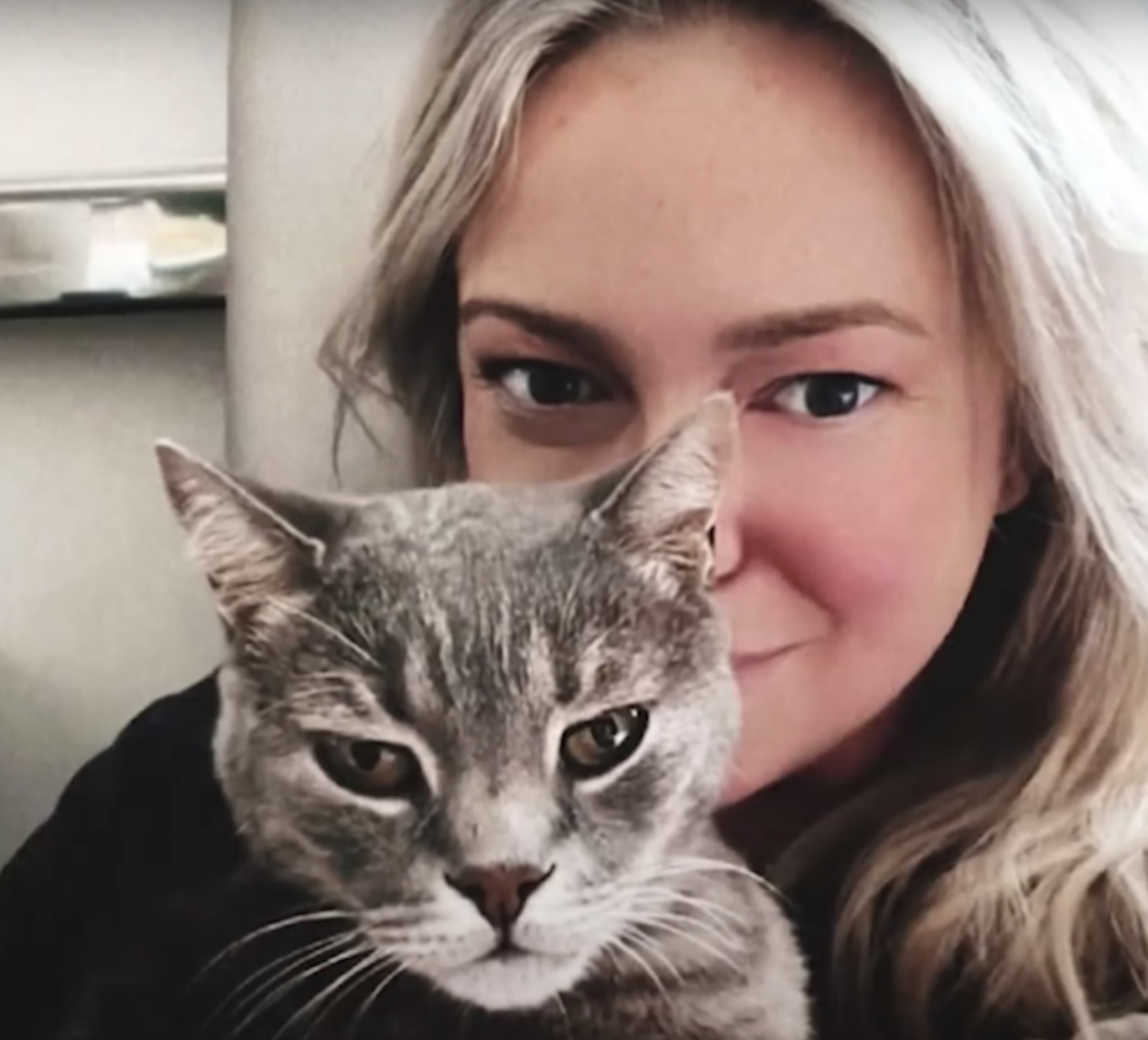 After a 7,000-mile adventure, Agnessa finally got to hold Arsenii in her arms again. Agnessa cried tears of joy as her furry friend cuddled with her. Adjusting to their new home has been easier for the family now that Arsenii is back. 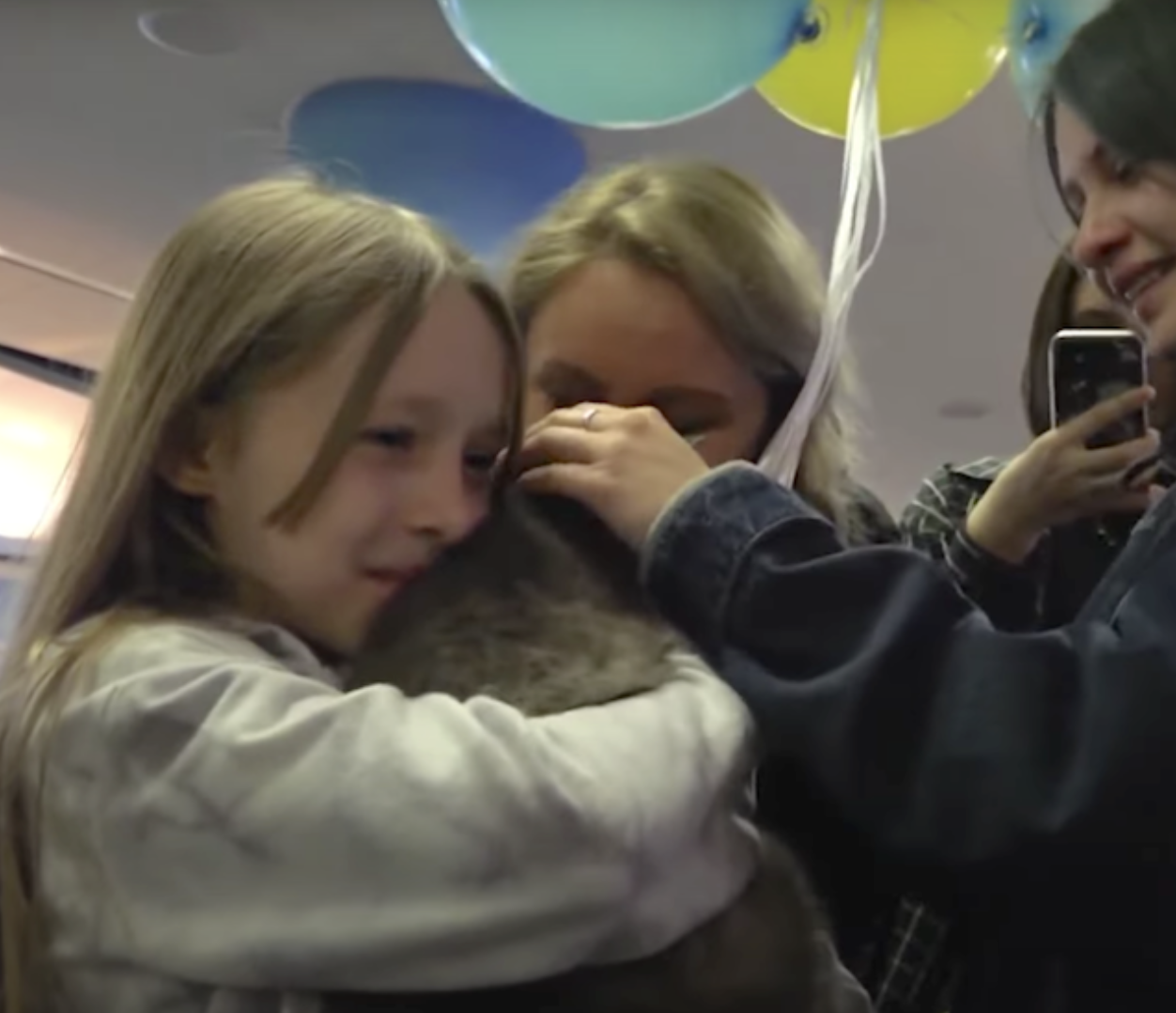 The family is slowly adjusting to their new lives. They’re working on improving their English and starting a business to support themselves. Yet, getting where they need to be will be a slow process, so the community continues to support them. If you’d like to help this family get back on their feet, you can donate to their GoFundMe.

And a video of the news story. You can see how incredibly complicated it was to get the cat to the U.S. via Moldavia, Romania, Greece, and Canada. The reunion between Agnessa and Arsenii at the end will bring tears to your eyes.  Don’t miss the video!

9 thoughts on “Caturday felid trifecta: Campus cares for its feral moggies; Hemingway’s polydactylous cats survive Hurricane Ian; a refugee girl from Romania gets her cat back after an arduous rescue; and lagniappe”