G’day, mate: it’s Friday, November 4, 2022, and again we have a truncated Hili. But it is National Candy Day, and perhaps I’ll get some. It’s also International Stout Day (the beer, and I prefer Murphy’s to Guinness), National Chicken Lady Day (look it up), and National Skeptics Day. 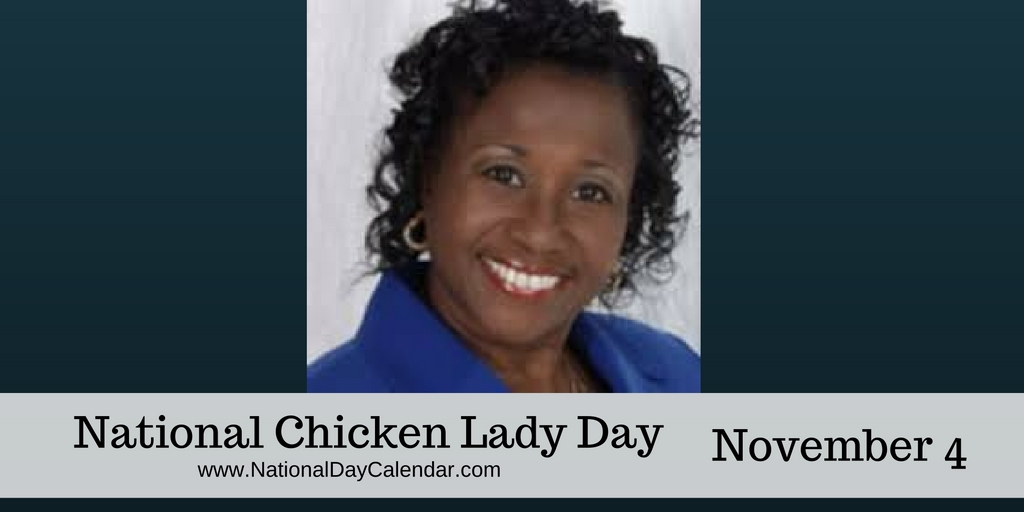 Readers who wish to enlighten us about the signifcant events, births, or deaths on this day are invited to peruse the November 4 Wikipedia page.

*Our conference at Stanford has become quite controversial; this article in the Chronicle of Higher Education summarizes the brouhaha.  Lots of implicit tarring of participants because a few dicey characters are speaking! As for me, I’m gonna say my piece and listen to everyone else. Click to read (h/t: Wayne):

*A cognitively impaired man with a traumatic brain injury has been fired from his job at the The Madison (Wisconsin) Children’s Museum. Why? Because he wore a Halloween costume making him look like Hitler, even though he thought he was mocking Hitler. (h/t: Divy)

The museum said the man believed he was making a mockery of the Nazi Party’s leader when he wore the costume on a busy street near the University of Wisconsin-Madison campus on Saturday. He was fired Tuesday night, after his costume was condemned on social media and by some news outlets, including the Jerusalem Post.

The museum said in a statement that it fired the man after it “determined that his continued employment would create an environment at odds with our values and unwelcoming to visitors and staff.” The statement said the man’s costume was “completely unacceptable” and that the museum stands against antisemitism, bigotry and discrimination.

The museum also said the man has cognitive disabilities due to a traumatic brain injury and that his work over the last decade has been supervised.

“It is our understanding that he believed his costume to be mocking Hitler,” the statement said.

The Madison Police Department called the costume “offensive and reprehensible,” but said wearing it was not a crime. Police said they told the man about the concerns his costume raised.

For crying out loud—the man was cognitively impaired and thought he was mocking Hitler. Only a heartless moron would fire him for that. I have tweeted at them, and you’re welcome to contact them, too:

.@PlayAtMCM It was cruel and heartless of you to fire a brain-damaged employee who wore a Halloween Hitler costume thinking he was mocking Hitler. Please hire hm back!https://t.co/CVGthnM06A

*News from Ken, who calls this as coming from the Better.A Little Bit Late Than After the Election Department:

The Trump appointed federal district judge, Michael Liburdi, who initially ruled that it was totally cool for armed, masked, tactical-gear-clad vigilantes to monitor Arizona ballot drop boxes, has rethought his position after additional filings in a related case from the League of Women Voters, the Alliance for Retired Americans, and the US Dept. of Justice (and after hearing testimony from intimidated eye witnesses), and has issued an order restraining the vigilantes from, among other things, positioning themselves within 75 feet (250 feet if armed) of the drop boxes.

*The first fossil ichthyosaur, collected by Mary Anning herself, was destroyed by German bombs during WWII. But, as the article below explains, plaster casts of the original have just been discovered and identified. Click to read: 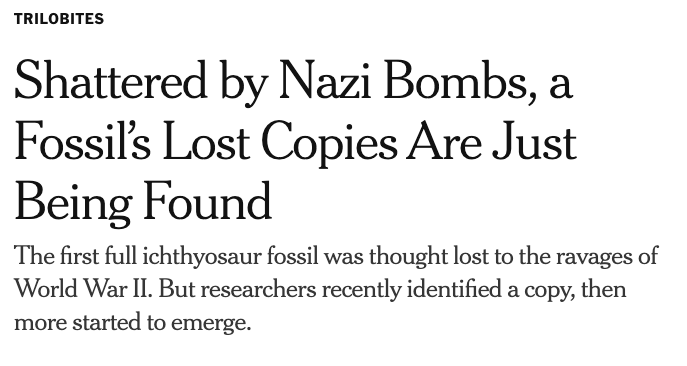 Losing the fossil to the ravages of World War II was a blow to paleontology, depriving future scientists of a specimen that would have aided study of the long extinct animals while also being steeped in the field’s history.

“At the time, they were like the real icons of evolution,” said Dean Lomax, a paleontologist at the University of Manchester in England.

But just as the ichthyosaur fossil allowed modern humans to ponder the aquatic creature, scientists have discovered plaster copies of the specimen that may restore some of that historical connection

. . . In a study published Wednesday in Royal Society Open Science, paleontologists reported that they had located two casts of Anning and Home’s lost ichthyosaur. The copies have been sitting in collections at Yale Peabody Museum and the Natural History Museum, Berlin. Dr. Lomax, a co-author of the study with Judy Massare at the State University of New York, Brockport, matched the casts to an illustration in Home’s 1819 paper. And a tantalizing discovery that emerged during the reporting of the article suggests there may be yet more casts of the fossil gathering dust in archives around the world.

Now for few pictures of Palo Alto. First, its crunchy granola quality, similar to that of Davis (but pricier): 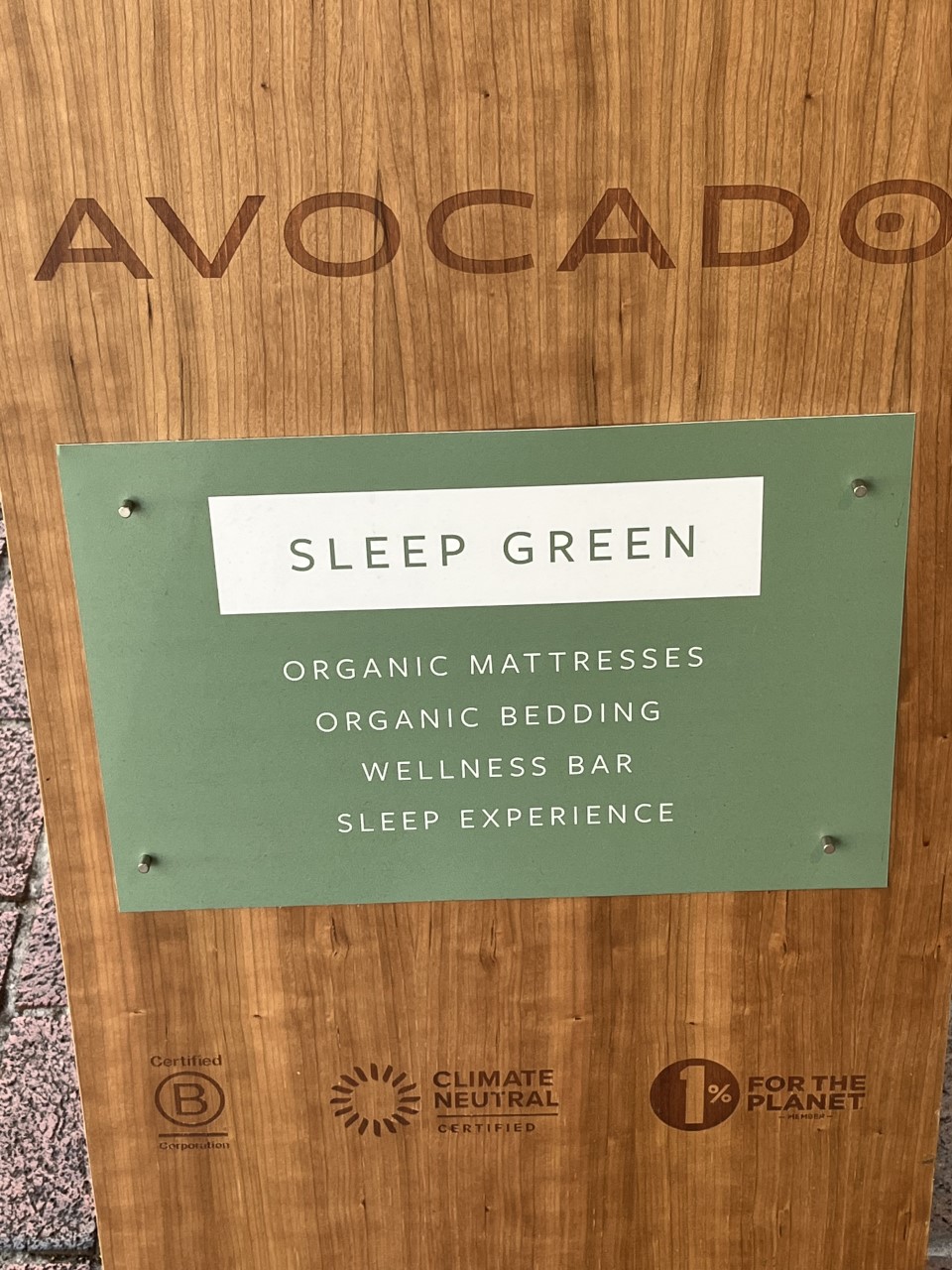 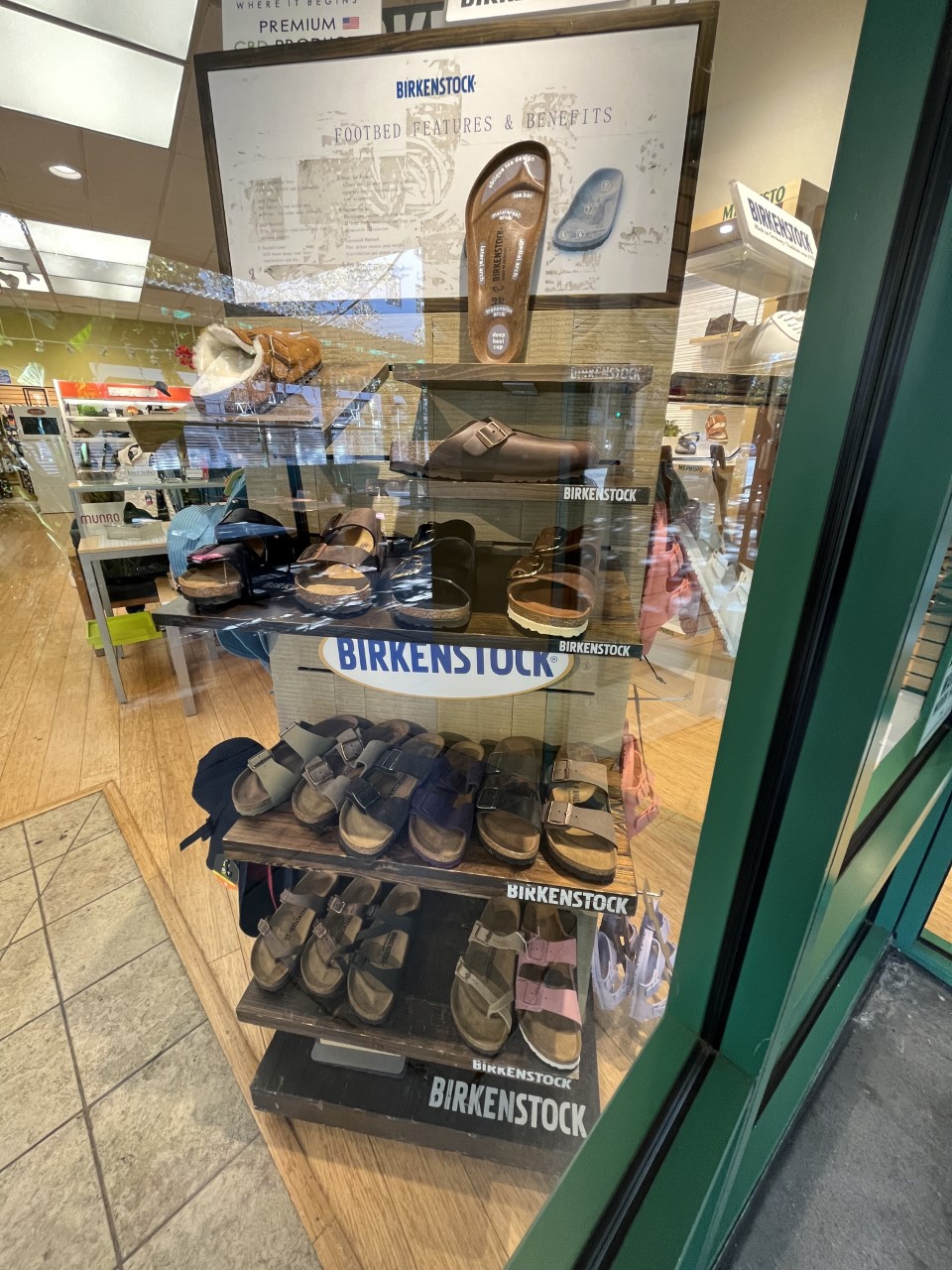 These two plants were identified with the “Seek” app, which you simply MUST get. It’s free! 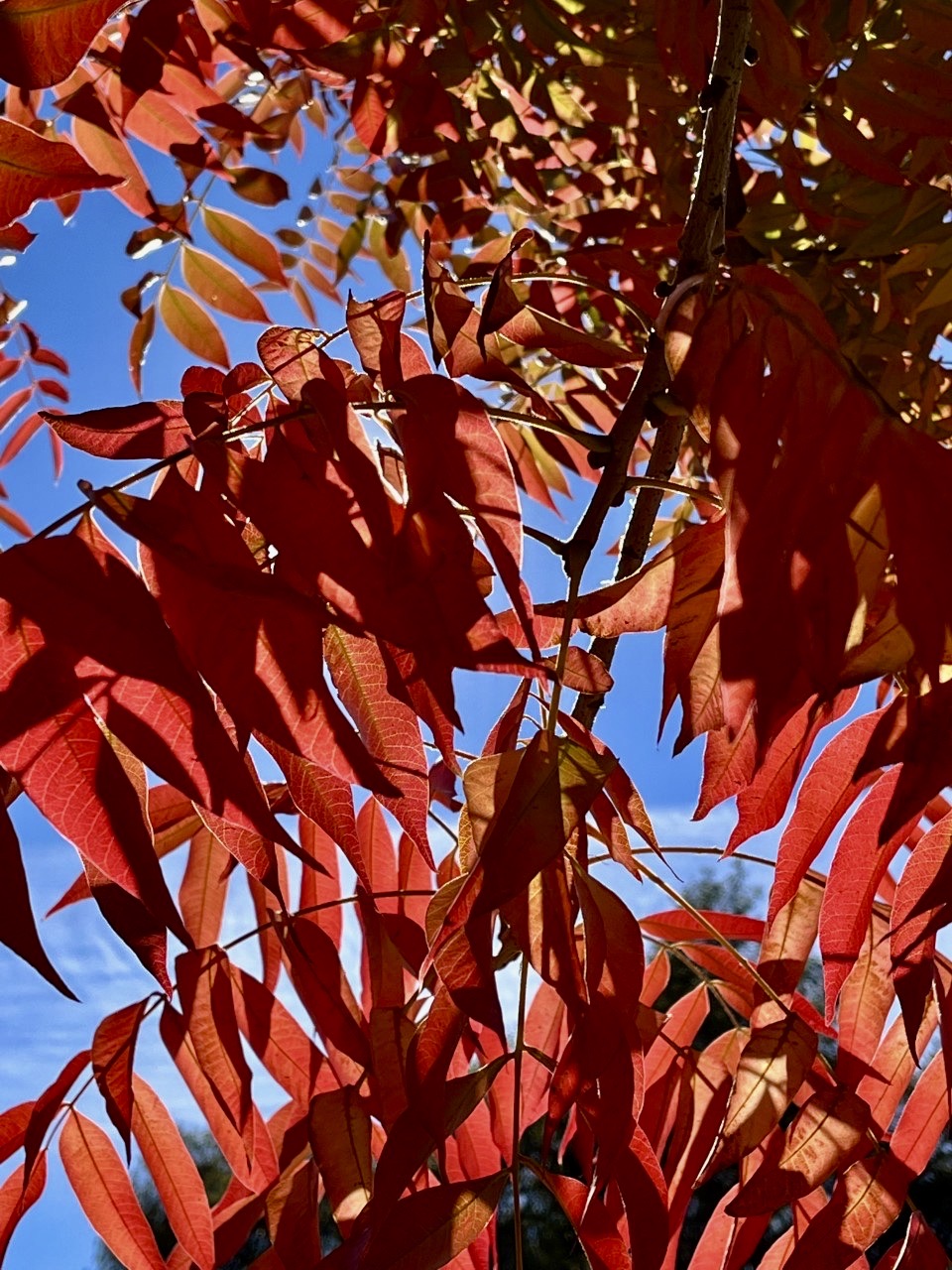 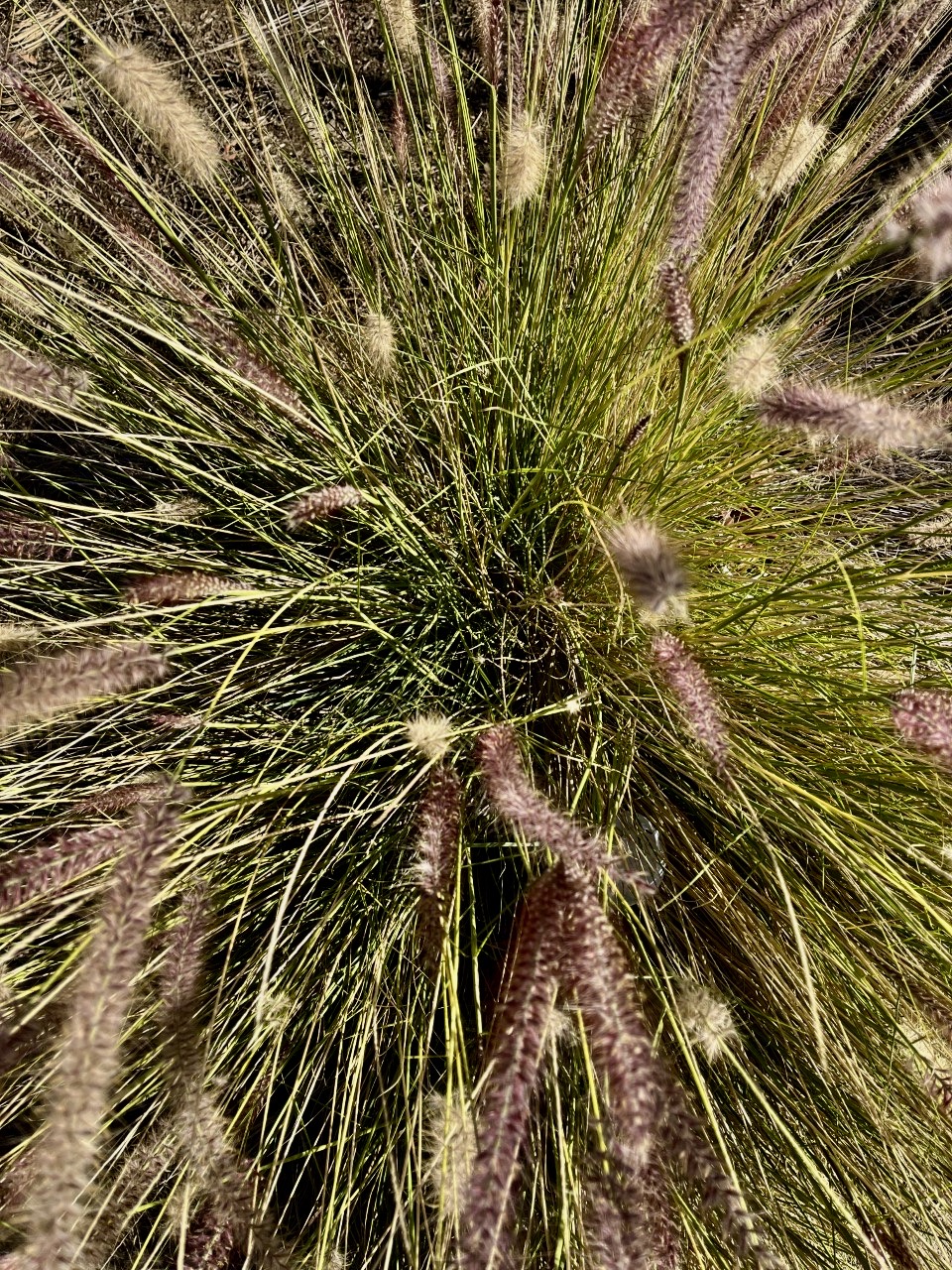 Meanwhile in Dobrzyn, today’s Hili has a title: “Points of View”:

Hili: I can’t see Kulka in the garden.
Kulka: I wonder where Hili is. 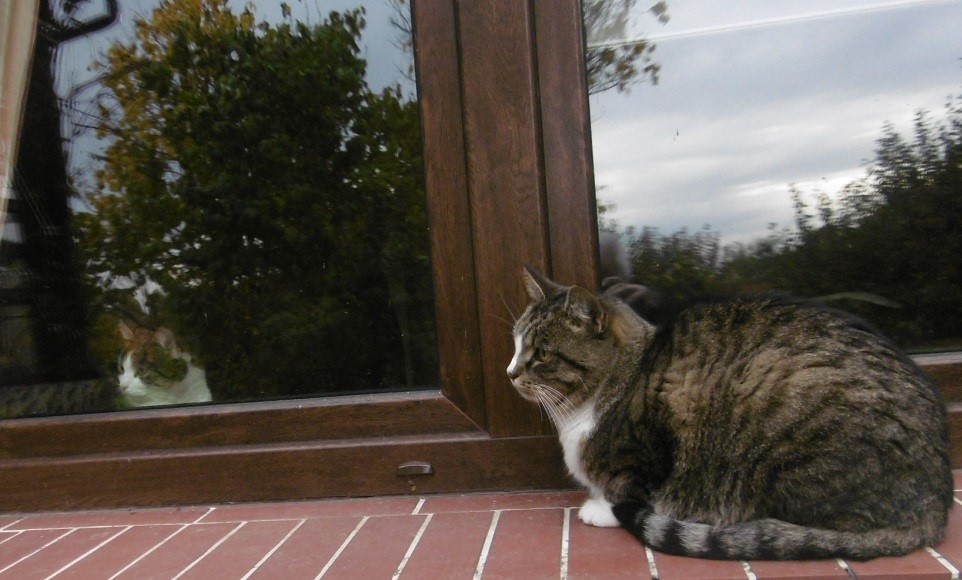 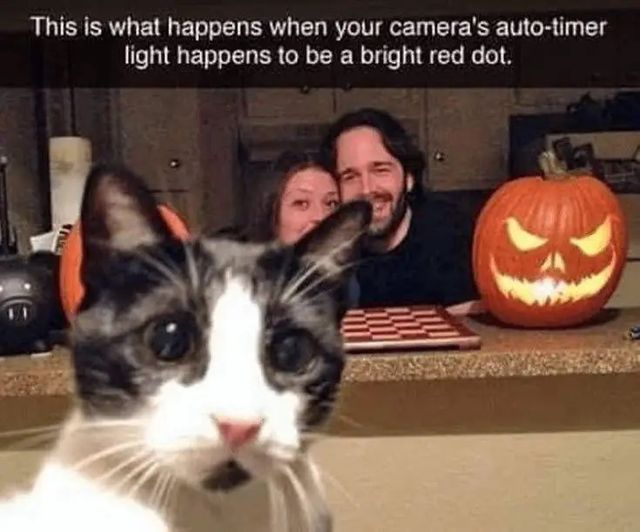 From Shiresh Jadhave on FB, with the caption, “Young Scottish Highland, the cutest cows ever.” 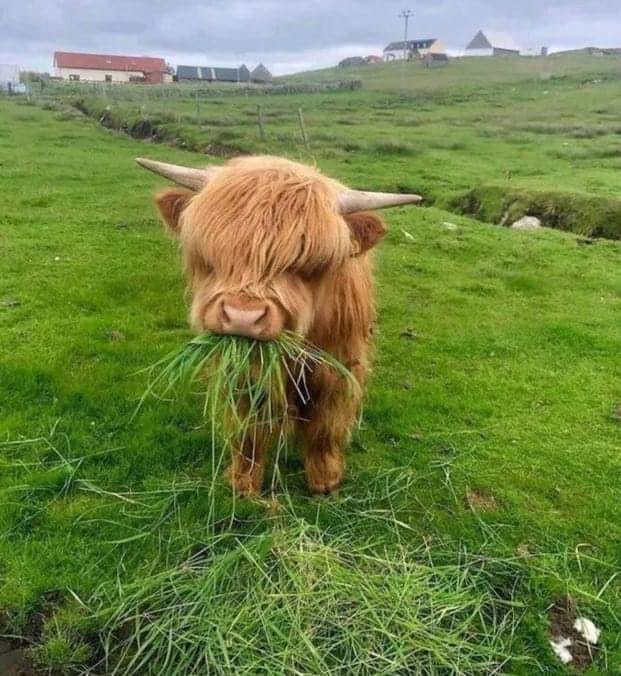 A playful kitten flummoxes a security guard—for a while.  From LADBible on FB:

God (who is not verified), is having no truck with Elon Musk’s latest plan:

There's almost nothing I wouldn't do to get verified.

But paying $8 a month is one of them.

From Masih. Notice that her hair is flying free:

On of the most beautiful video of Iran’s uprising. The man who sent this video to me from Arak city says: This is my sister throwing stone to the billboard of Khomeini the founder of the Islamic revolution. We brother & sister fight shoulder to shoulder for freedom.#MahsaAmini pic.twitter.com/BtqFDKJMJr

From Malcolm (ignore the superfluous apostrophe and watch the whole video):

Simon says, “This does nothing for my fear of heights.”

Yet another reason I wouldn’t do this pic.twitter.com/mjdUxBmIii

From Barry, who says, “If there’s a more relaxed squirrel in the world, I haven’t seen it.” I think it’s being cooled by the A/C unit, though what blows outside should be warm air, no?

He was deported to #Auschwitz from #Theresienstadt Ghetto on 18 December 1943. He did not survive. pic.twitter.com/m4opt50pSj

Tweets from Matthew. He says “this is a fabulous thread,” and it is. Go have a look, and turn the sound up on the video:

We succeeded in recreating a Neolithic flatbread!

This is about as close as I can figure out how to make bread as it would have been baked in one of the first daily bread-making cultures, ca. 9,000 years ago. I’ll let you judge the authenticity…but the taste is fantastic. pic.twitter.com/z3cWIyVXbf

What can happenwhen you take your Cello into a forest and play Bach’s Suite No.1 …🦌

A while thread of projections onto a Swiss public building:

Here’s those tentacles you ordered. pic.twitter.com/YNJrxQZqYp