Here’s a video about a woman who cloned her Ragdoll cat Chai, but she didn’t get anything near a replica of the original. She says “they couldn’t be any more different”, but that’s not true. They are fairly similar but not nearly as identical as identical twins. The cloning process can change gene expression, the genes themselves, and of course a different environment can change behavior. Plus there could have been somatic mutations(or epigenetic changes) in the first cat that were reproduced in the second because genes from a skin sample were used. (The “half genetic/half other stuff” is a very crude characterization since the degree of heritability of traits (the proportion of variation among individuals due to variation in their genes) varies widely from trait to trait.  Better to say “part genetic/part other stuff.”)

Otherwise, this is a pretty good video that highlights what you should need to know if you want to clone a beloved but defunct pet. And you’d better have a spare $35,000 or so, which is what it costs to clone a cat (d*gs cost more).

If you have a cat you may already suspect this, but here is more information from Science Alert (click on screenshot). They summarize a paper from Nature Scientific Reports (I haven’t read the whole thing) that analyzes the way staff interact with cats they’ve never met and whether those interactions comport with “best practices” recommended by cat experts. You already know not to rub a strange cat on the belly! 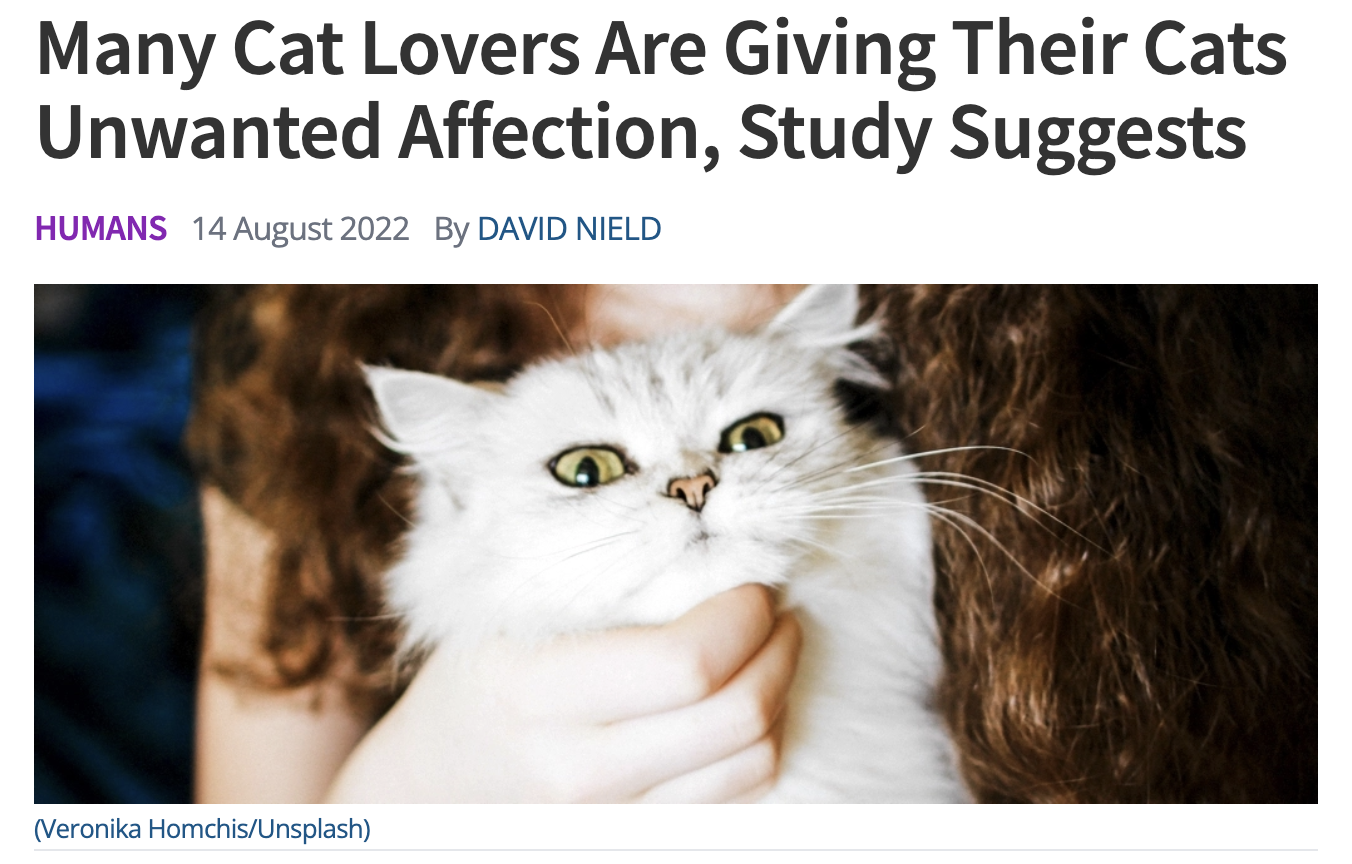 Previous research has helped to establish how cats should be handled to put them at ease, or at least less hostile and perhaps a bit more affectionate. This includes areas of the body where the animals like to be petted, and how and when they prefer to be picked up.

Based on the findings of the new research, self-confessed ‘cat people’ tend to pet the animals in areas that they aren’t so comfortable with, and give the felines less choice over how they are handled.

“Of course, every cat is an individual and many will have specific preferences for how they prefer to be interacted with,” says Lauren Finka, a researcher in animal behavior and welfare at Nottingham Trent University in the UK.

“However, there are also some good general principles to follow in order to ensure every cat is as comfortable as possible and that their specific needs are being met.”

The study involved roughly 120 volunteers who were given five minutes each in Battersea Dogs and Cats Home with three cats they didn’t know. Each volunteer was asked to fill out a survey in advance, assessing their personality and experience with cats.

Apart from being told to let the cats approach them, rather than follow the animals around, those involved in the experiment were encouraged to interact with the felines as they normally would with cats they might have at home.

The researchers found that people who rated themselves as more experienced and savvy with cats were more likely to touch the animals on the base of the tail, legs, back and tummy – areas where cats typically don’t like to be petted (they usually prefer the ears, the cheeks, and under the chin).

Mark that. Who would touch an unknown cat on the tummy or base of the tail? That’s asking for trouble! Let them sniff you, and then gently touch their head or scratch under their chin!  More:

“Our findings suggest that certain characteristics we might assume would make someone good at interacting with cats – how knowledgeable they say they are, their cat ownership experiences and being older – should not always be considered as reliable indicators of a person’s suitability to adopt certain cats, particularly those with specific handling or behavioral needs,” says Finka.

When it comes to people’s age and personality types, those who were older and who ranked higher for neuroticism were the volunteers more likely to hold and restrain the cats more, while extroverts tended to initiate contact more often and pet the less preferred areas of the cats’ bodies.

On the other hand, people who ranked higher for agreeableness were less likely to touch the more sensitive areas of the cats. Additionally, those who reported having formal experience working with cats were shown to be more ‘cat friendly’ in terms of being sensitive to the wishes of the animals.

The thinking behind the study is not to shame anyone because of the way they handle cats, but to encourage interactions that are beneficial to felines, by experienced and new cat owners alike. Battersea has put together an animation on the topic of cat care which you can see here.

The results are an example of the Dunning-Kruger effect, whereby people rate themselves more highly than they actually are. In this case, they’re assuming that the things they’ve learned to do with their own moggies can be applied willy-nilly to all other moggies. But anybody with a cat knows that their temperaments and personalities vary so widely that you have to approach each new cat as if it were a stranger with unknown preferences. Any moron knows not to touch a new cat’s belly or scritch the back of its tail.

Dodo Land is the place I want to live. Meet Frankie and Theo, two cats who race like the wind to their bowls at feeding time. Their feet barely touch the ground, reminding me of cartoon characters, like the Roadrunner, who seem to run on air!

The set up an obstacle course between cat and food at 1:20.  Be sure to see Frankie’s aversive reaction to a jar of pickles!

********
Lagniappe: Justice in China.  A teacher who was fired for allowing his pet cat to appear onscreen when teaching virtually has asked for arbitration, and, after having to go to court, was awarded $6,000 reimbursement for what many of us would see a grossly unfair act of termination. Click below to read the BBC report, which I’ve posted in its entirety below (the emphasis is the BBC’s).

It happened in June last year during a livestream class by the instructor, known only as Luo.

During the class, Luo’s pet cat jumped into the camera’s view five times.

The education tech company that ran the virtual classes fired Lou, citing the feline’s sudden appearances on screen as a reason.

The company said Luo had taken part in “non-teaching” activities during class, and was also 10 minutes late to a previous class, Guangzhou Daily reported.

Luo appealed the decision in arbitration.

But the company refused to accept the order that it compensate the teacher for unfair dismissal and contested it in court, according to the news report.

Ruling on the case, Judge Liao Yajing from the Guangzhou Tianhe People’s Court said that if employers require their staff to work from home, they should not have the same expectations as if they were working in an office, the Central Radio Network reported.

“The employer’s rules should not only comply with the laws, but should also be fair and reasonable,” she said.

Online classes have become common globally amid lockdowns and school closures during the Covid pandemic.

The same is true in China. But a change in policy last year that banned academic tutors from making a profit is estimated to have wiped billions from the value of the country’s biggest private education companies.

4 thoughts on “Caturday felid trifecta: A cloned cat; cats get unwanted affection; cats race to their food bowls; and lagniappe”