There will be no wildlife photos today as I have only a few sets that I must conserve until more come in (hint, hint).

The Queue, as it’s called, has now achieved iconic status in England. Queuing, of course, is the British national hobby, and woe be to the American who doesn’t Respect the Queue!  But the line to see Queen Elizabeth’s coffin is the Mother of All Queues, now about five miles long.  Below is a live Queue Tracker that shows you how long you have to wait (14 hours right now). And it’s not going to get shorter, either, as the line is expected to grow until before the lying-in-state ends in two days. As I wrote a couple of days ago,

The lying-in-state ends “at 06.30 BST on Monday, 19 September, and the queue will close early to ensure as many people as possible can get in.” If the crowds continue, it have to close a day early!

Elizabeth is lying in the Palace of Westminster, first built in the 11th century and reconstructed in 1834 after a fire. You all know this building; it’s where the Houses of Parliament are and is flanked by the tower of Big Ben:

So get your tuchas in line if you’re in London want to see it all. Here’s a live tracker of the waiting time and a map, but you’ll want to watch the live feed of the lying-in-state at the bottom of this post.

Here’s The Queue at present At least you can see many of London’s sights as you shuffle along for a day or so. It’s now about 5.5 miles long, which means it would take you two hours to walk past it all at normal speed.

A line long enough to see from space:@Maxar satellite imagery taken this afternoon above London shows people waiting to pay their respects to Queen Elizabeth II at Westminster Hall. pic.twitter.com/7IS8Y3R7x0

I have to say that although I wasn’t a big fan of Queen Elizabeth, and an even smaller fan of the Royal Family, it is touching to see the Brits come out in such huge numbers, enduring long waits for a few seconds of meditation before the coffin of their late Queen. They are a stalwart folk, able to endure a lot to show their love of country. Even Matthew, who is like me (thought Elizabeth was okay, doesn’t like the Royal Family), wavered a bit, sending me an email this morning:

He won’t go, of course, but it’s telling that the thought crossed his mind.  He also sent me a fantastic series of tweets by Jules Birkby. a 42-year-old artist who endured the long wait with her mum. I highly recommend that you read through her whole series! (Keep clicking “show more replies” when you get to the end of one part.) Birkby is full of patience and good humor, and really gives you a sense of what it’s like to walk The Queue. Click on the first tweet below to get started:

My Mum absolutely loves the Queen and is the owner of many a commemorative item (plates, tea towels, spoons, mugs, cake tins). She spent her honeymoon in London for the Queen’s Silver Jubilee. She spent all night queuing to see the Queen Mum’s coffin, before working the next day. 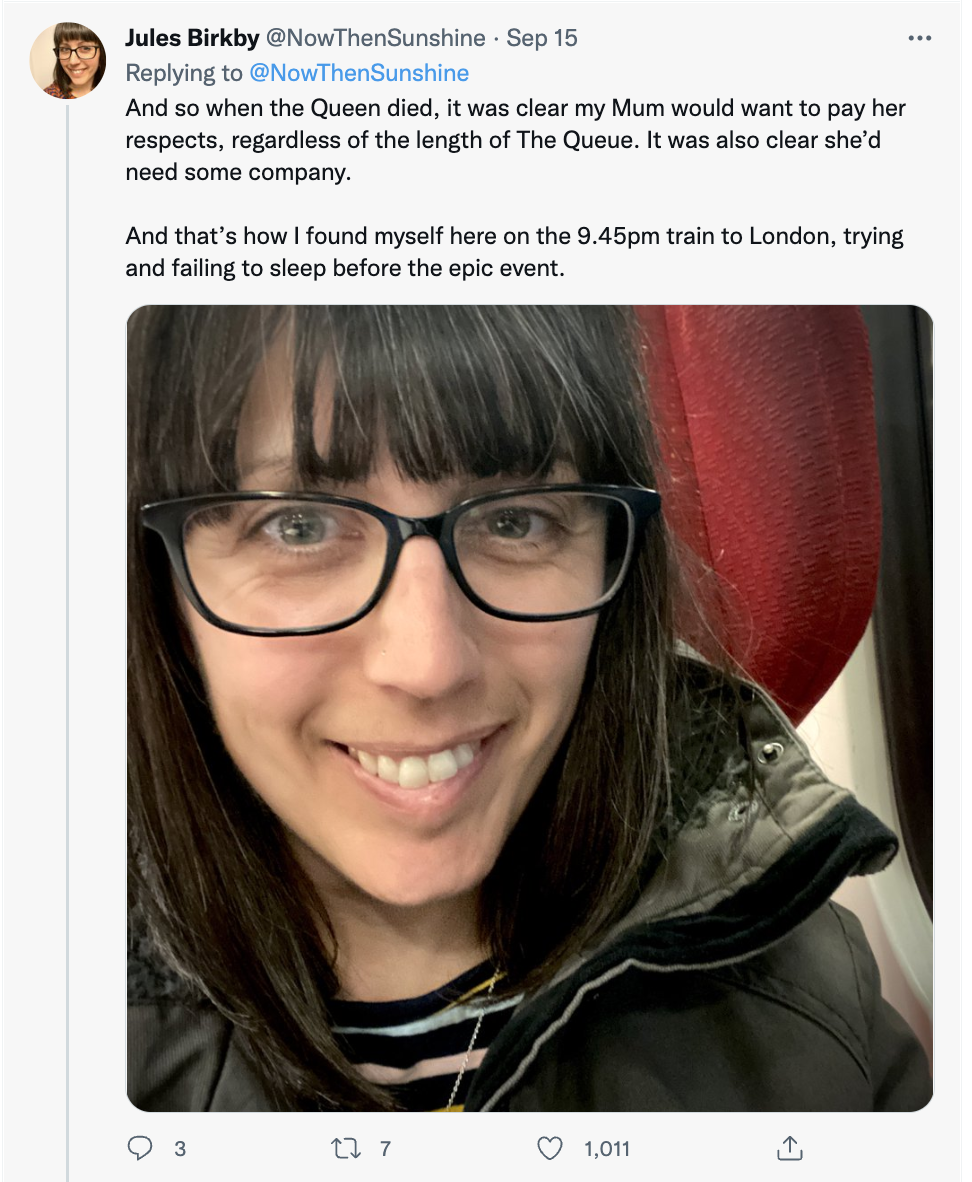 Keep clicking “show replies” until you get to the end of the thread (the tweet in which Jules mentions her greeting-card operation).

I add two tweets Jules made right after she and her Mum exited Westminster Palace. The last one is so British: Jules was pining for a cup of tea the whole night and morning, and she finally got one. Oh, and David Beckham was also in The Queue in front of them, and waited just like anyone else. NOBODY jumps The Queue!

Jules notes that some women walked the whole way in high heels. 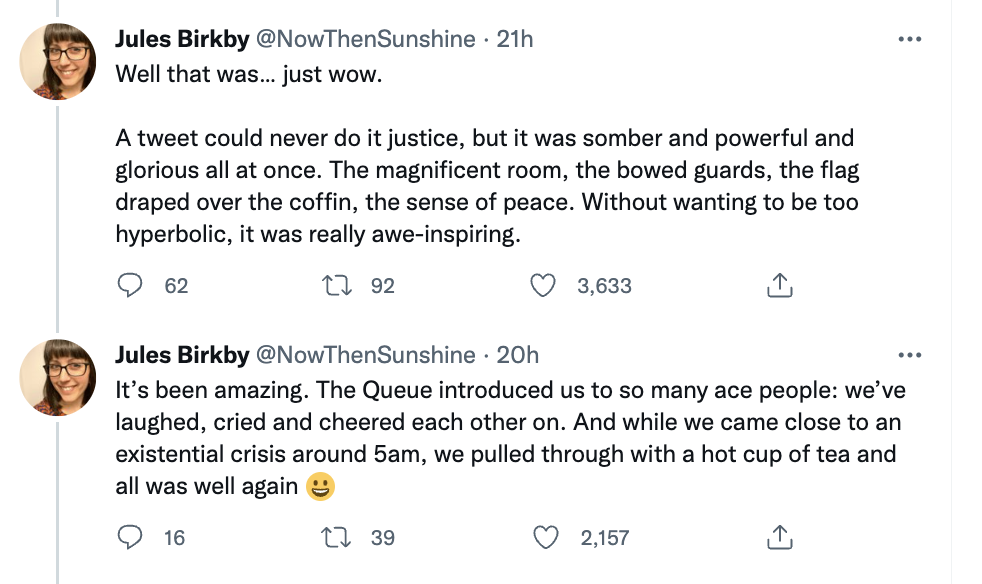 Now you’ll want to have at least a look at the livestream of the ceremony on YouTube. Do watch for at least 15 minutes, as that’s how often they change the guard. and that is definitely worth seeing.

As Matthew said, “Very soothing, no commentary, no music. They change the guard every 15 mins.”.  I’m touched by how all the guards look down and also by the behavior of the visitors, which is quite variable but always respectful. Some people bow, some people weep, but nobody tarries, as they know others are waiting.

There are several cameras that alternately focus on different aspects of the crowd and the venue.