Reader Athayde Tonhasca Júnior has a two-part photo series on Crete, an island I’ve visited twice and where I lived for a month (in the then tiny-village of Sitia) in 1972.  I have to say that Crete was fairly untouristed then—three of us rented a house in the small fishing village of Sitia for $30 total for the month—but when I went back some years later, they had built a “Club Med” type resort in Sitia, and the entire northern shore of this gorgeous island has become touristy and commercial.  The South and the mountains, however, are said to still be lovely. (The southern coast of Crete was where Joni Mitchell lived in a cave in Matala with hippies, and her song “Carey” refers to that.)

But I digress. Here’s Athayde’s photos, taken this past June, with his captions indented. Part 2 will come another day. Don’t forget to click on the photos to enlarge them.

Fig 1. Chania (Χανιά), settled by the Minoans and taken by the Byzantines, Venetians, Ottomans, and the Germans. 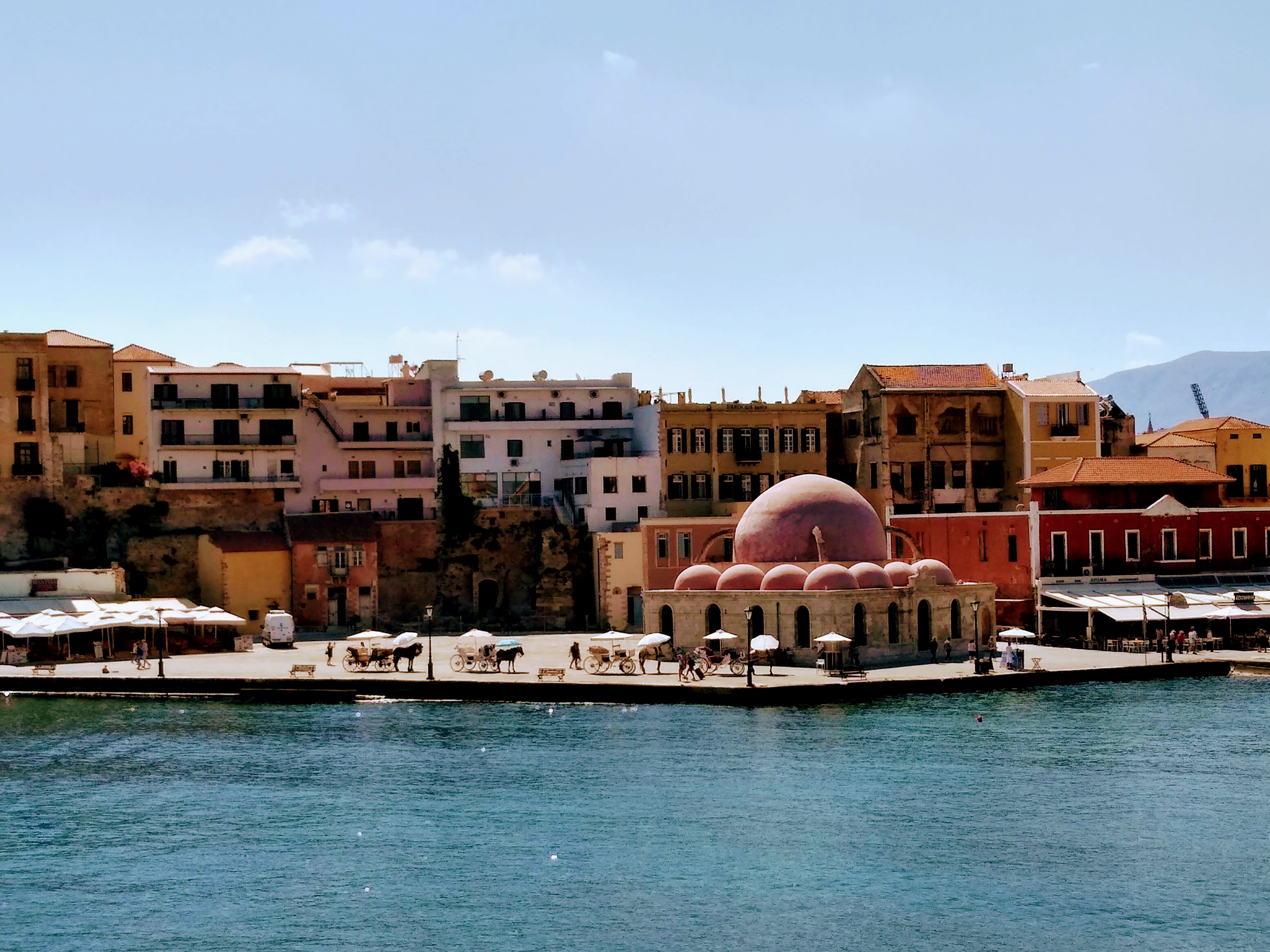 Fig. 2. Safe to pass? Crete was shaken by 301 earthquakes in the 30-day period leading to July 13, 2022. Most quakes are barely noticed, but a big one is always possible. Some archaeologists believe that a massive earthquake or volcanic eruption followed by a tsunami weakened the Minoan civilization, making them vulnerable to invading Mycenaeans from the mainland. The earthquake simulator in the Natural History Museum of Crete (Heraklion) gives you a scary and realistic idea of a magnitude 7 tremor – better than the one at the California Academy of Sciences in San Francisco. 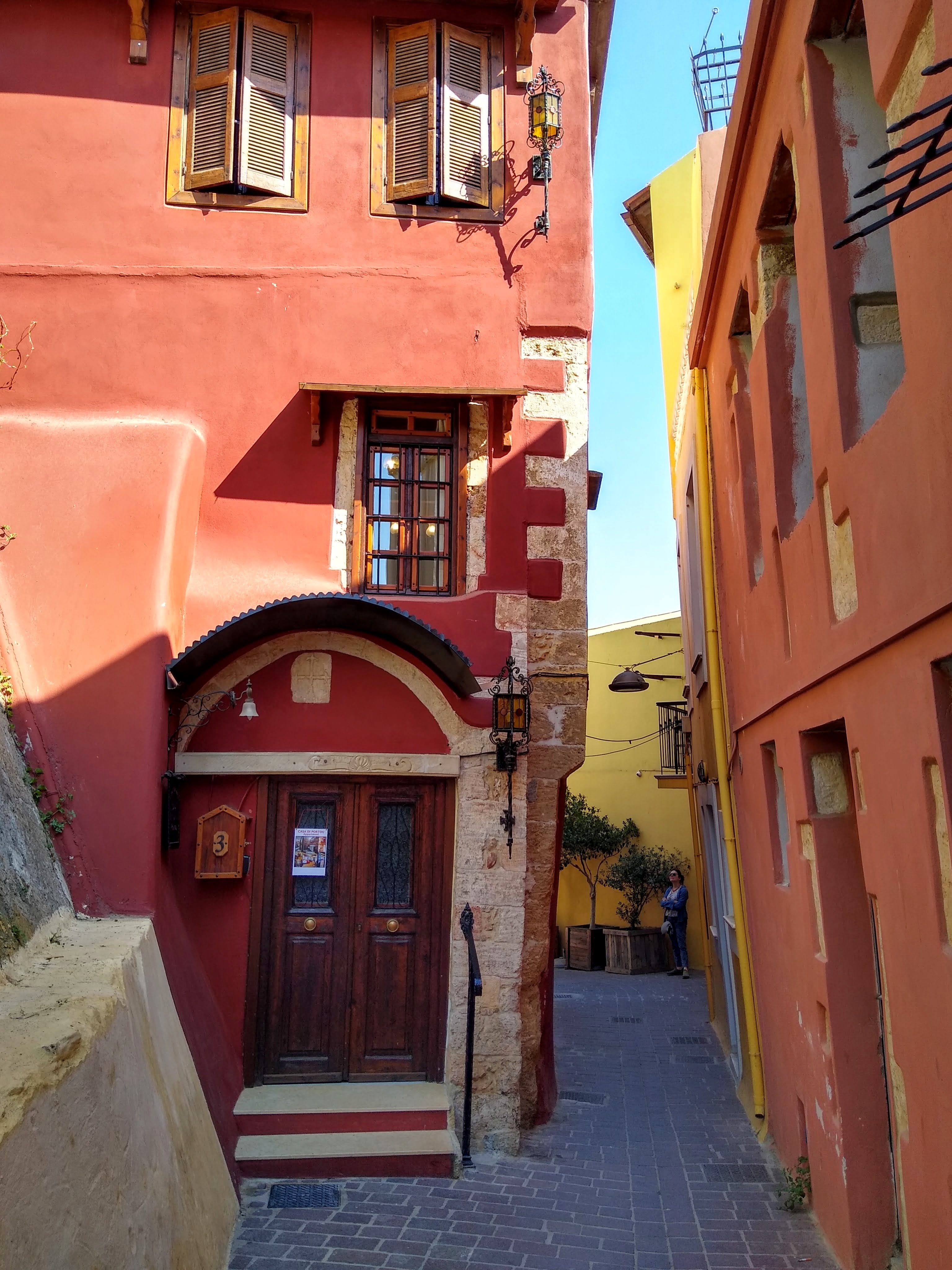 Fig. 3. Shelling peas during a chinwag in Chania’s old town. At the harbour, a few blocks from here, you would be swept away by the thick, slow current of tourists drifting along stalls, bars and restaurants. That is where you could pause to buy a “Game of Thrones” t-shirt or dine on a full English breakfast or a mayonnaise-spiked Greek salad. 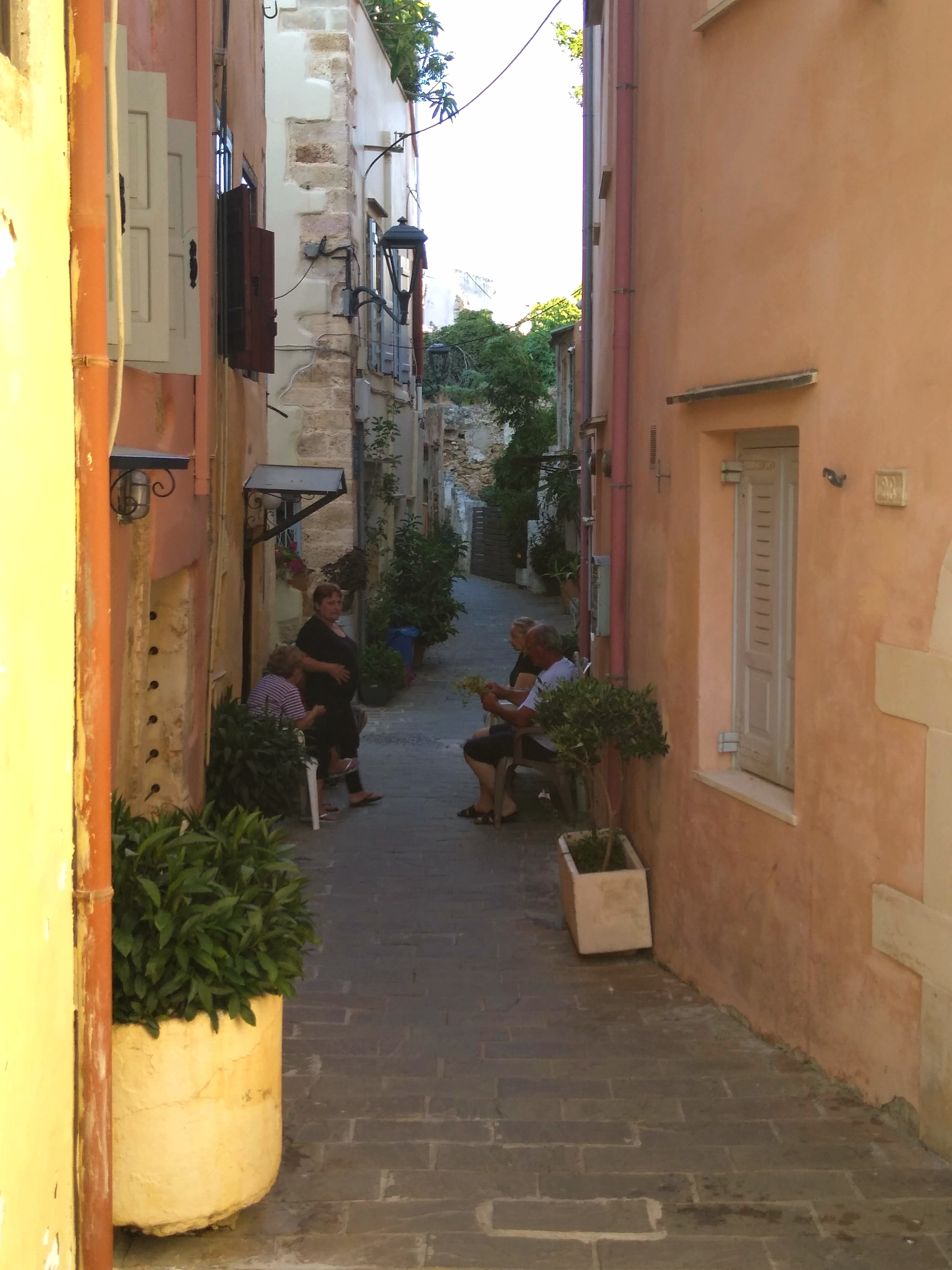 Fig 4. Chania is surrounded by a wall built by the Byzantine rulers as a protection against invading Arabs. But destruction came from within, so to speak. Constantinople was sacked by their brother Christians during the Fourth Crusade (1204), and the Byzantine Empire crumbled. Crete was bestowed upon the Republic of Venice, who cracked down on Orthodox Christians. The Fourth Crusade put an end to the discussions about uniting the Eastern and Western Churches, and Orthodox Christians still hold a grudge. Pope John Paul II mumbled some words of regret about the Crusade, and the “apology” was accepted by the Patriarch of Constantinople in 2004. 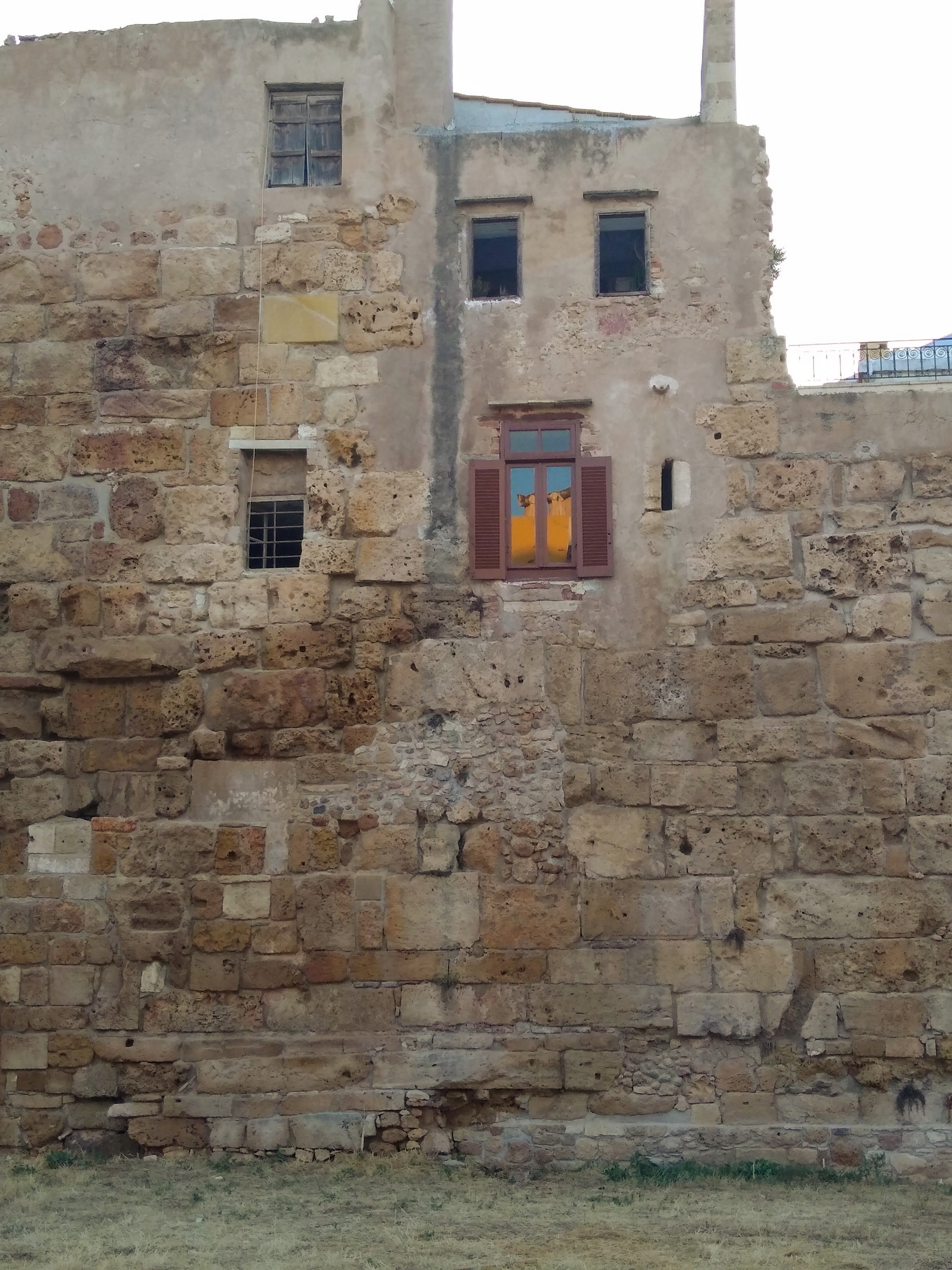 Fig 5. Fragment of the winged lion of St. Mark the Evangelist at the Historical Museum of Crete, Heraklion. The winged lion is the emblem of the Most Serene Republic of Venice, or La Serenissima. Venice was one of the first capitalist super powers: independent, rich, efficient and ruthless. Crete remained under Venetian rule until the Ottomans threw them out in 1669. 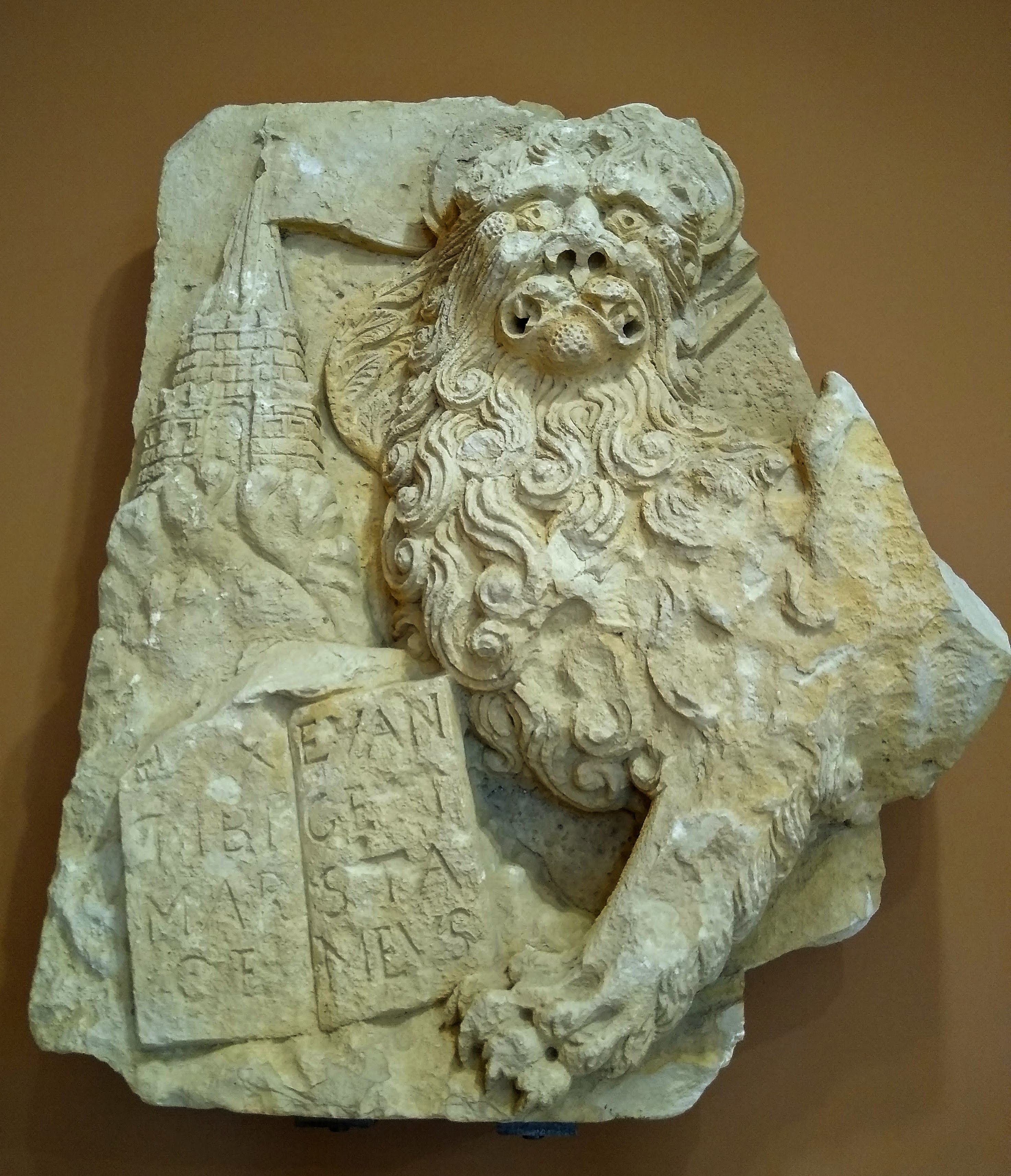 Fig 6. The winged lion adorning a Trenitalia locomotive in Venice. 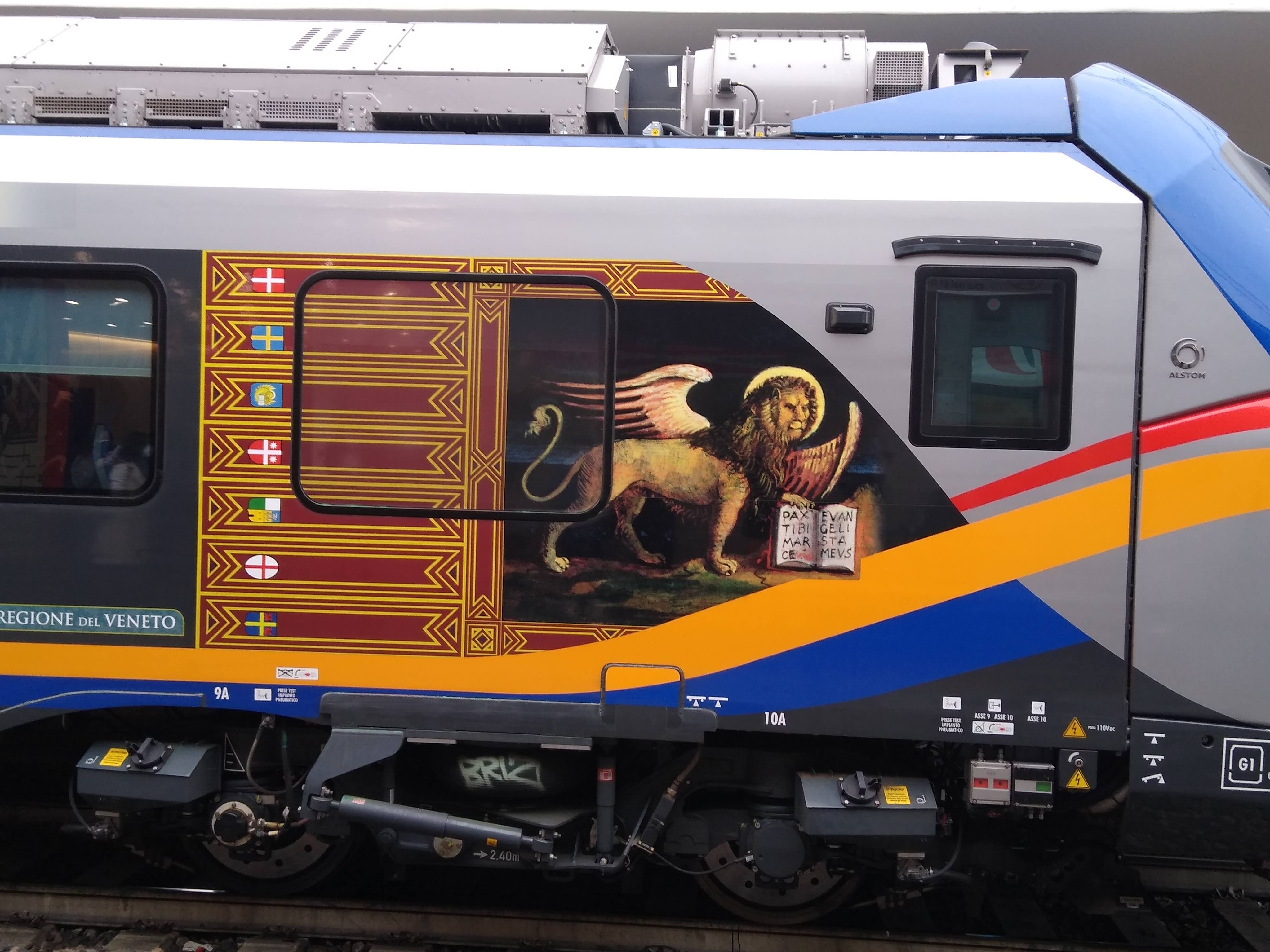 Fig. 7. This parchment is a decree of Sultan Mahmud II renewing privileges of the Church of Crete at the appointment of Patriarch Kallinikos III, 1823 (HMC). Nowadays the words ‘Islam’ and ‘tolerance’ don’t mix well, but things were different then. On conquering Crete, the Ottomans re-established the Orthodox Church, which had been marginalised by the Venetian rulers. And there was a time when Jews in the Ottoman Empire would pay higher taxes but otherwise be left alone; in Spain or Portugal, they could be burned alive.

Fig. 8. Agios Nikolaos (St Nicholas) church in Chania. Built in 1320, turned into a mosque by invading Turks in 1645, back to a church in 1918 after the Turks were expelled in 1898. Greece and Turkey’s current dispute over the ownership of some puny islands in the Aegean Sea is just the last chapter of a long history of squabbling, with many nasty, harrowing episodes. All may have started with a celebrity scandal: lecherous Paris eloping with beautiful Helen. Paris was the Trojan king’s son (Troy is in today’s Turkey), and Helen was the wife of Menelaus, king of Sparta: no good could come out of it, as Homer reported to us. 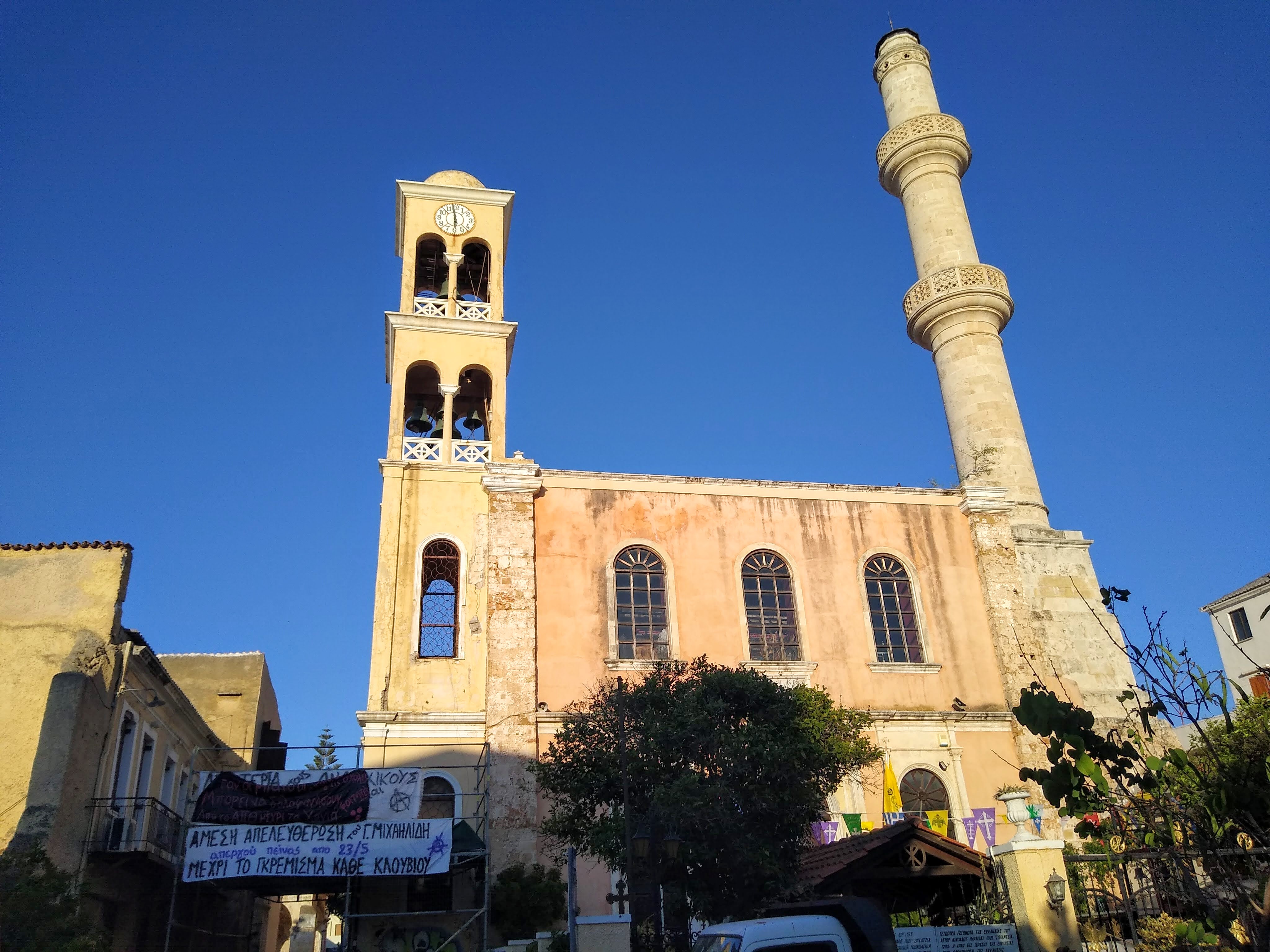 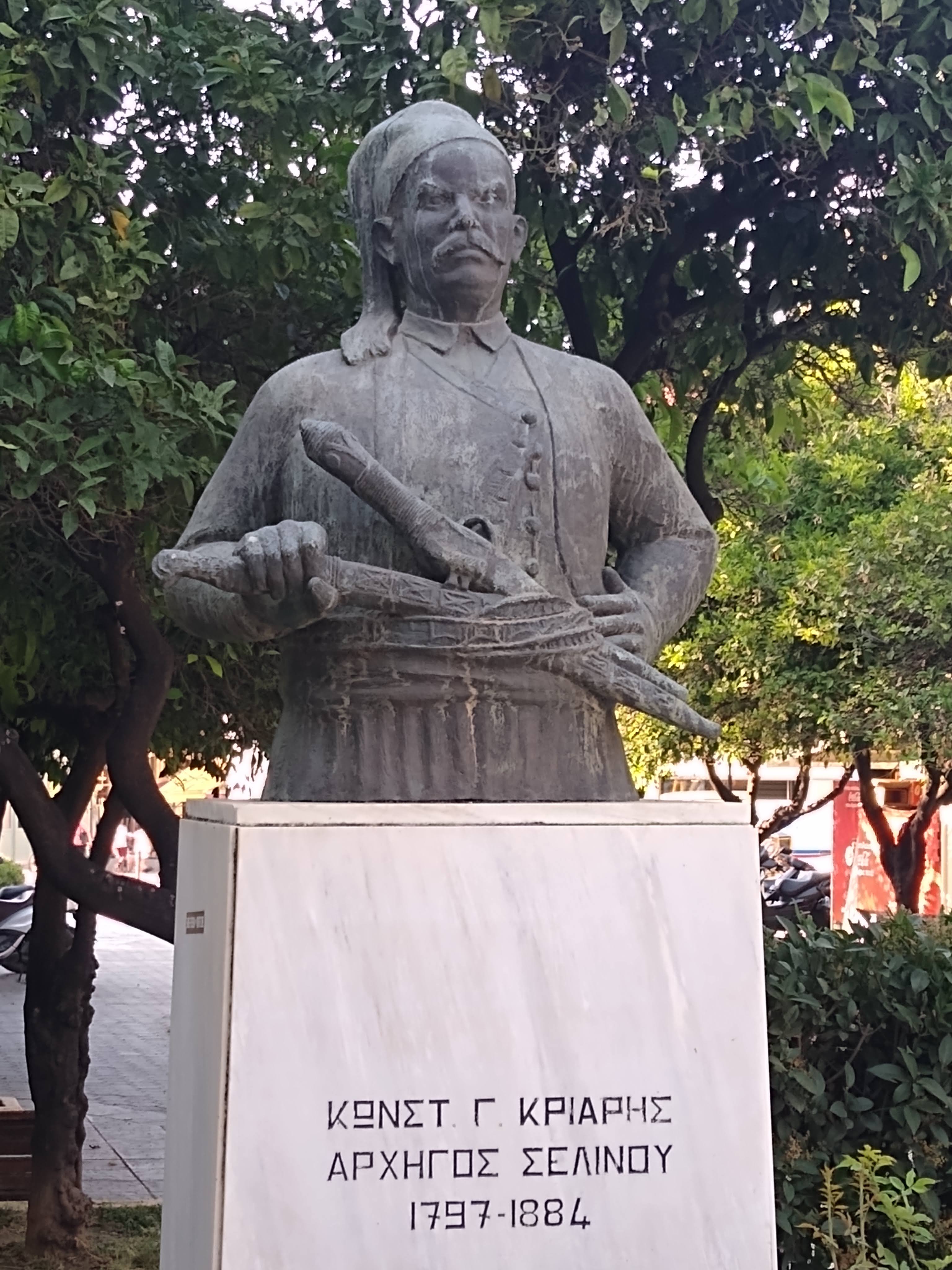 Fig. 10. Enosis (union) or tanatos (death). Flag displayed in the Chania home (today a museum) of Eleftherios Venizelos (1864-1936), considered the father of modern Greece. Enosis was the movement of Greek communities outside Greece to unite with the Greek state. It helped the absorption of Crete and the formation of modern Greece, but also led to terrible episodes such as the destruction of Smyrna and the Cypriot revolt, still unresolved. 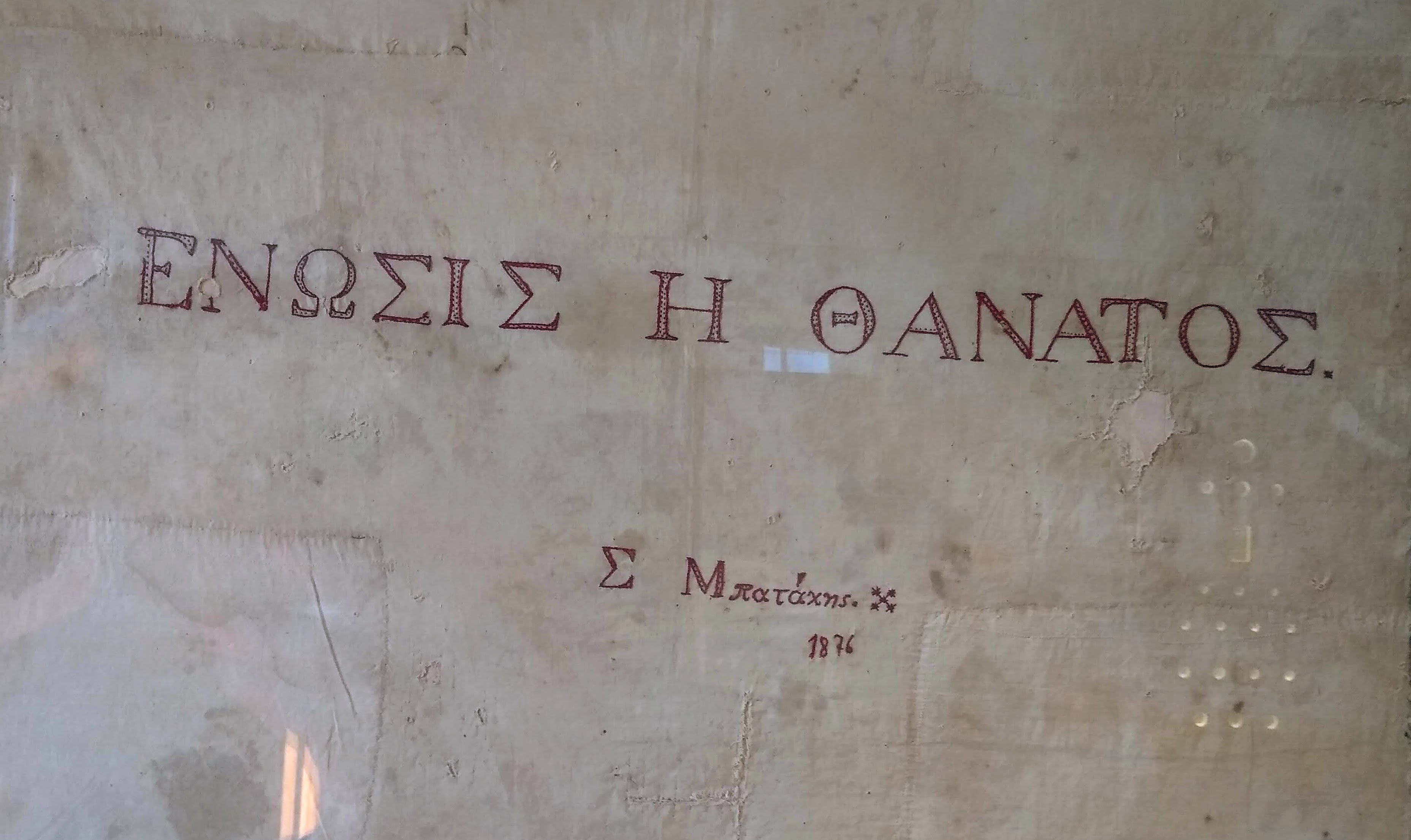 Fig. 11. Maleme airfield. In 1941, the Germans invaded Crete with paratroopers and gliders. But it all went spectacularly wrong; Allied troops and civilians wiped out the elite of the German paratroopers. Then, a cockup of gargantuan proportions, which has yet to be explained: the Allied forces withdrew from the airfield, allowing the Germans to send reinforcements and occupy the whole island. 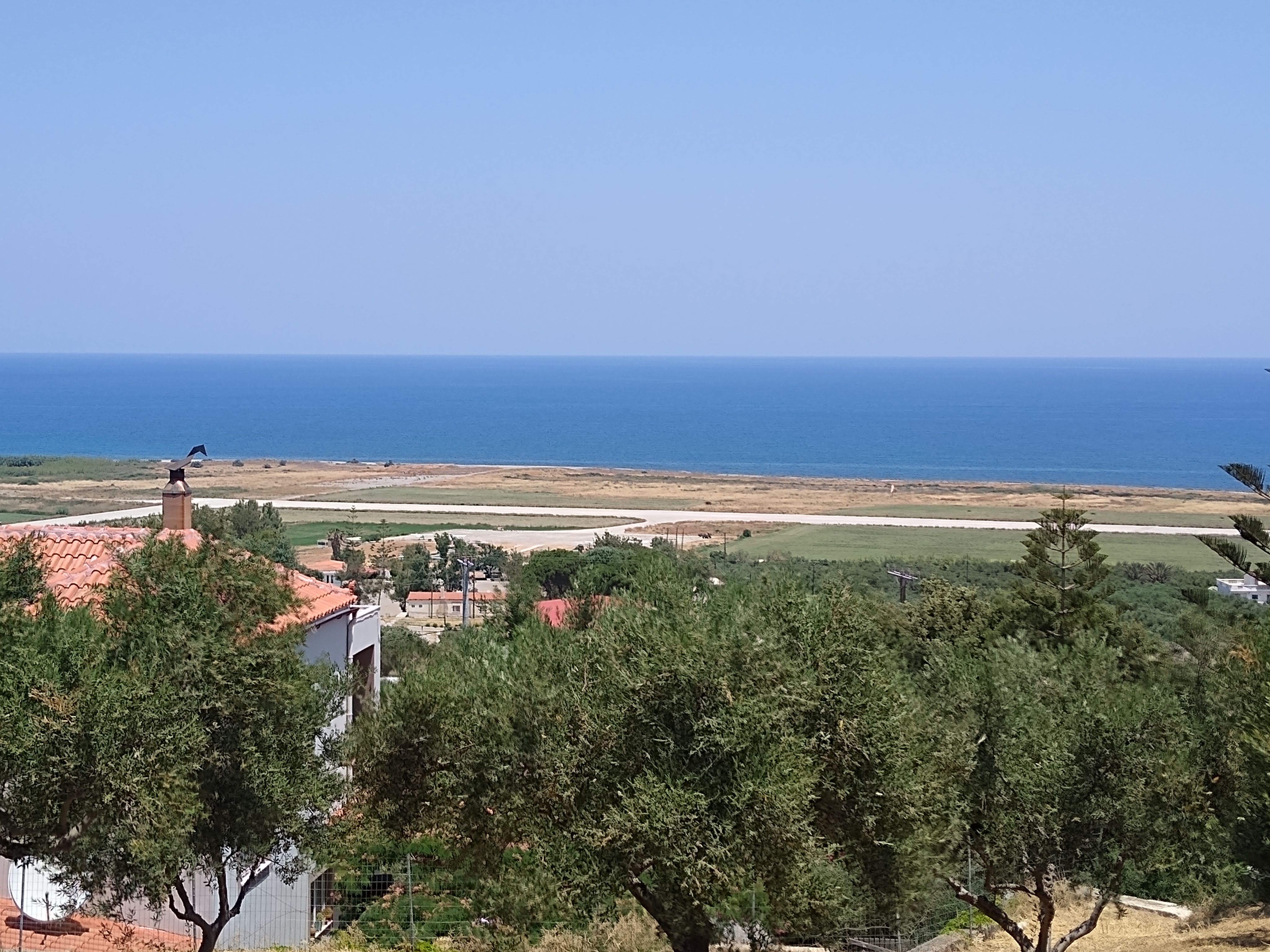 Fig. 12. Some of the graves of 4,468 German soldiers buried at the Maleme war cemetery (two bodies/grave), who were killed during the invasion and occupation of Crete (1941-1945). In an ironic historical twist, for many years the German cemetery was cared for by George Psychoundakis (1920-2006), a member of the Cretan resistance. Psychoundakis was a remarkable man: he served as a runner for the Special Operations Executive (SOE) under the supervision of Patrick Leigh Fermor (1915-2011), a name familiar to many Britons. Psychoundakis received a rudimentary education in a village school, and was a shepherd until the outbreak of the war. He ended up translating the Iliad and Odyssey from ancient Greek into the Cretan dialect, and was honoured by the Academy of Athens. 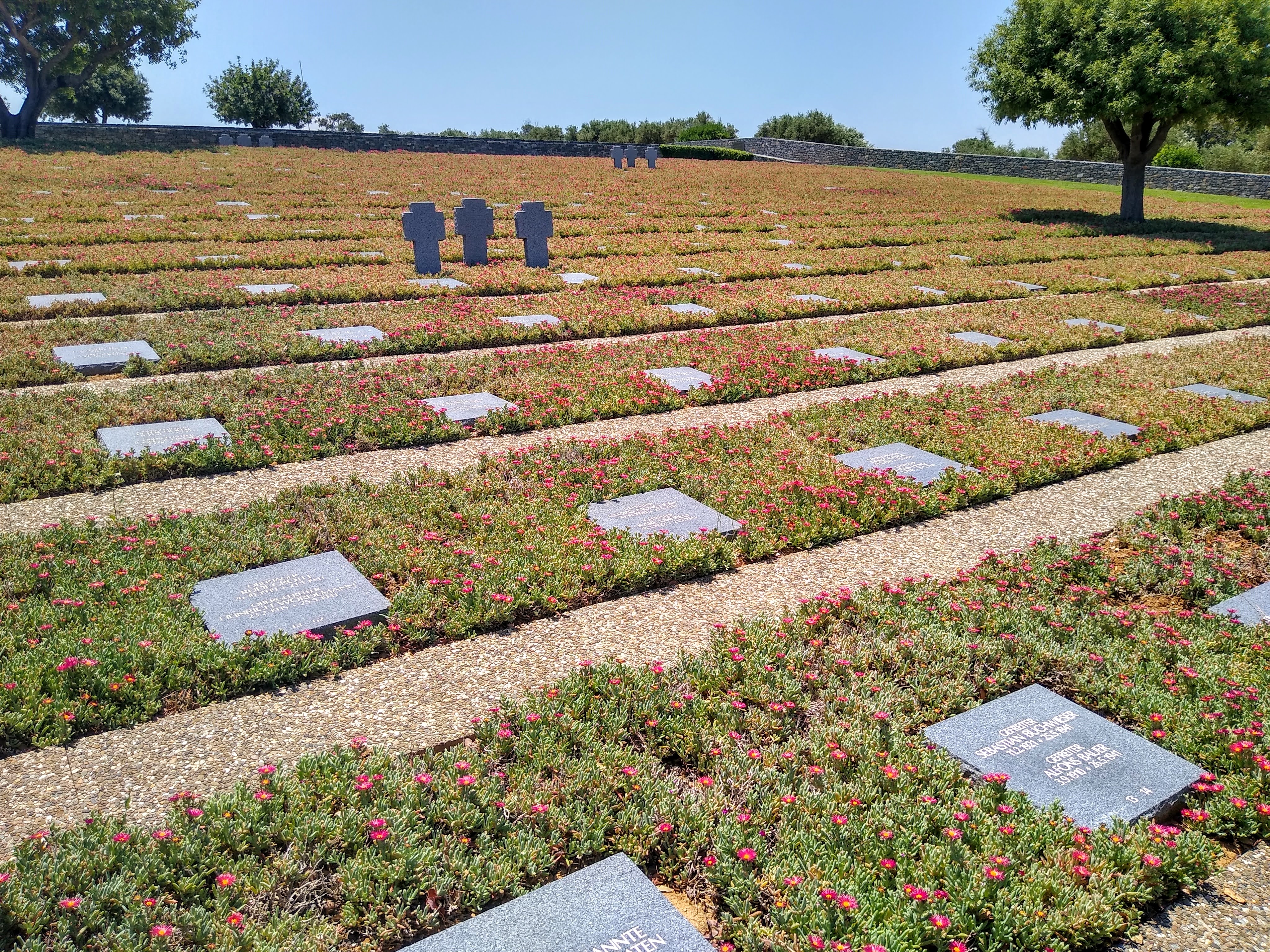 A note from Jerry. When my significant other and I visited in 1972, we often communicate with the older locals in German, as they spoke German they learned during the German occupation. (I’m somewhat fluent in German and can make my way in restaurants and transportation in Greek, but German is easy for me.) The interesting thing is that the older Greeks would only speak German to me when they ascertained that I was American and not German. They wouldn’t speak German to Germans, for they still despised them after what the Nazis did to Crete and the Cretans during WWII.