When I was younger—actually, it doesn’t seem that long ago—when one bought a big tub of ice cream, it was a full half gallon. Then the companies started shrinking the sizes of the containers from 64 ounces to 56 ounces, and now the big container of most name brands, like Breyers (the go-to “quality brand” of my youth), are a paltry 48 ounces. That’s a quart and a half, or a full 25% reduction in size from the original. 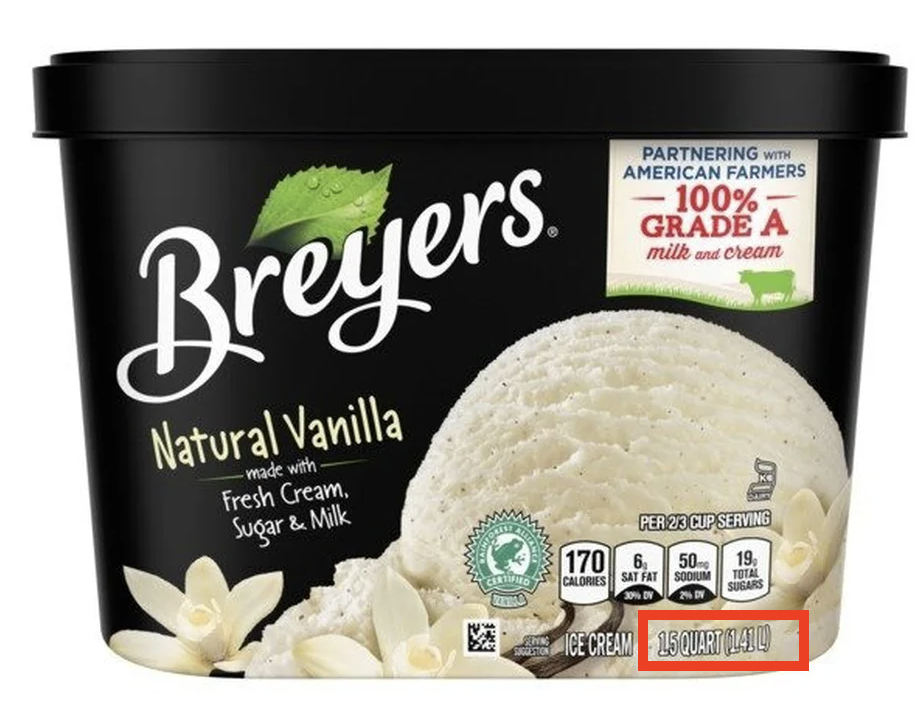 Why do you think they did that? We’re not stupid: they shrunk the containers but did not commensurately shrink the price, so a given amount of ice cream cost more.  It’s capitalism, Jake! Now you could figure this out if you look at the unit price (price per ounce) required to be posted in the grocery stores, but who ever does that? In the end, it was pure duplicity whose effectiveness counted on consumers not paying attention to per-unit prices—or even noticing the size change.

Another trick is that what looks like “ice cream” is, if you scrutinize the label, often described really a “frozen dairy dessert” (this is particularly true of exotic flavors). They are not the same thing. Breyer’s also did this downgrade, as described in the New York Times in 2013 (see picture below):

First, as part of typical trompe l’oeil packaging, the cartons now hold 48 ounces, not the half-gallon’s 64. (The good news is that your hands haven’t become freakishly large; the bad news is that you’re not suddenly much stronger.)

Second, that age-old Breyers boast of “All Natural” has been replaced with “Quality,” which is one of those impressive words that loses impact the more you think about it.

Lastly, not all Breyers is what we once understood the name to mean. A Breyers carton in the store’s freezer might be ice cream, but the Breyers carton right beside it, identical in nearly every way, might be something called “frozen dairy dessert” — which, when translated from the original Orwell, means: not ice cream.

One example from a 2013 article in the New York Times (circle is mine): 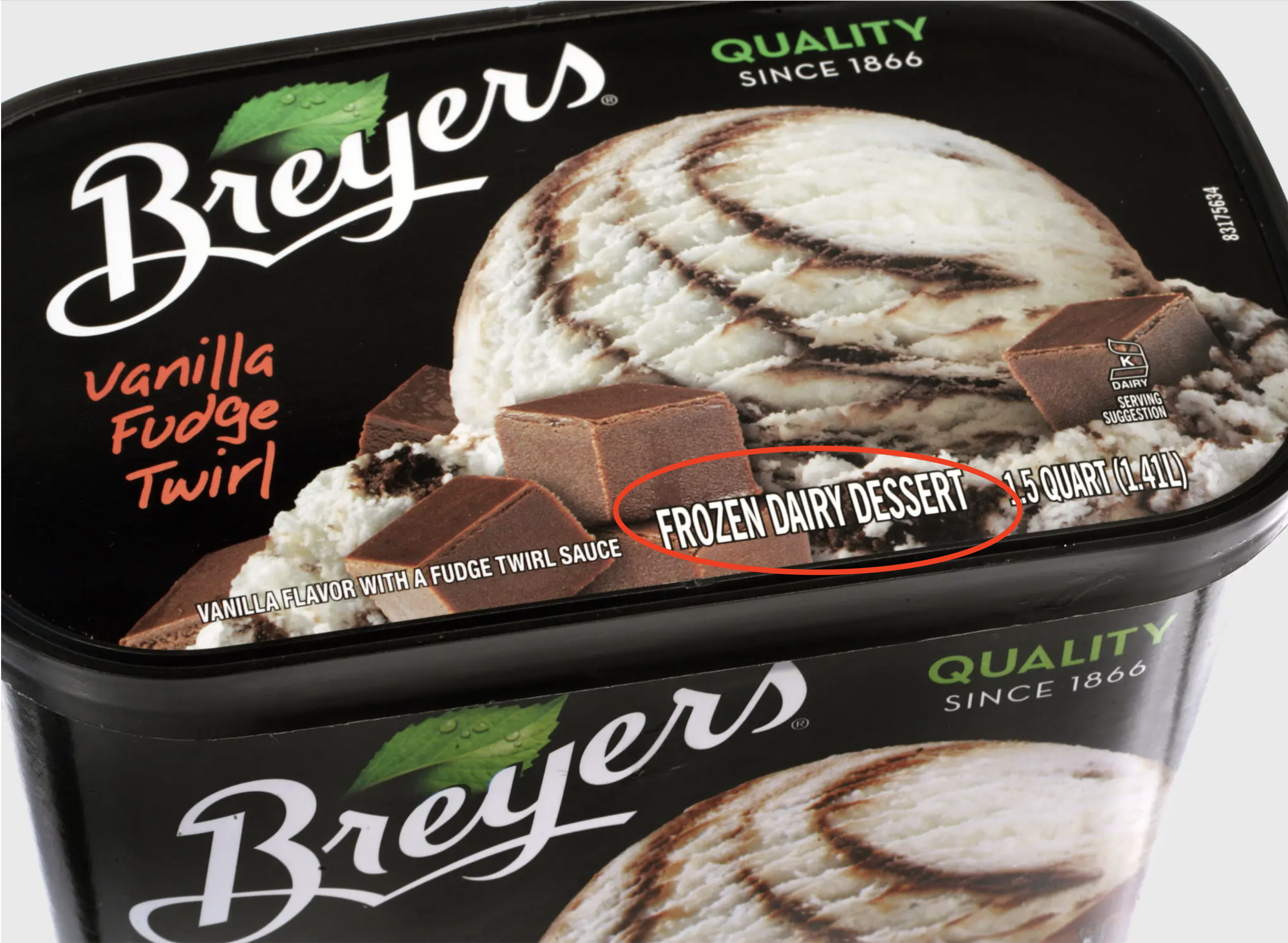 We all scream for frozen dairy dessert …

You might ask what the difference is between ice cream and a frozen dairy dessert, and I might answer that it is the same as the difference between a slice of American cheese and a slice of Kraft Singles American Pasteurized Prepared Cheese Product. Since this is not helpful, we turn to a spokeswoman for the Food and Drug Administration, the guardian of “standards of identity,” who explained the distinction in a written response: “Ice cream requires specific levels of milk fat content, nonfat milk solids content, total solids in each gallon of ice cream, and total weight in each gallon of ice cream, while frozen dairy products do not.”In general, ice cream has at least 10 percent dairy fat, and a frozen dairy dessert does not. In my freezer, the Breyers vanilla fudge twirl frozen dairy dessert has the ubiquitous corn syrup, and the Breyers vanilla ice cream does not.

Clearly the change in wording is another bit of duplicity to reduce manufacturing costs. I discovered this when I finally started inspecting the cartons, only to find that what I thought was ice cream was in fact a “frozen dairy dessert.” I was not happy.  Here’s how the NYT described the ingredients for Breyers vanilla ice cream vs. vanilla “frozen dairy dessert”.

Years ago I wrote to Breyer’s about the size change (as a curmudgeon, I did that from time to time), and the company wrote back bloviating about how “it’s what the consumers wanted”.  Of course that’s bullpucky. It’s capitalism, Jake! I want a full half gallon!

Last night I discovered what might be another trick, though I’m not sure. I had a pint of super-premium ice cream in my freezer, and decided to dip into it. When I looked at the calories, it said in big letters “320”.  But I didn’t look close enough, for that was the first nutritional ice cream on the label. But when I looked again, it was “320 calories PER SERVING”.  Closer inspection showed that there were supposed to be THREE servings per pint, so the total calories in the small carton was 960—a substantial number of calories. But that information appeared after the “per serving” information.

(In fact, all containers seem to specify a number of servings greater than those consumed by a normal person. Who decides what a “serving” is?)

Now I may be wrong, but shouldn’t the total calories per container appear first on the label? Do they put the “per serving” calories first so you think you’re eating healthier? Because NOBODY I KNOW GETS THREE SERVINGS OUT OF A PINT OF PREMIUM ICE CREAM!  I usually get two, but many of us, particularly when we need comfort, eat the whole damn pint.

Could it be that what I thought was a favor to the consumer (it isn’t; this is mandated by law) was really a way to make you think what you’re eating is less calorie-laden than it is? And that could result in your buying the ice cream when you wouldn’t if you really knew how many calories it had.

That is for Solomon to decide, but one thing’s for sure: the size reduction (not limited to ice cream, as the NYT mentions) is the result of pure greed. And it’s even more nefarious because it is hidden. You’ll never see on the label: “NEW SMALLER SIZE”.

Oh, and I just remembered Steve Gould’s old Natural History article, “Phyletic size decrease in Hershey bars,” one of his funnier essays (still online), in which he describes the shrinkage in Hershey bars over time, always ultimately accompanied by an increase in the price per ounce. Here’s the graph Gould showed, putting it in an evolutionary context. Note that the article describes how Hershey’s tried to bribe Gould by offering him a free ten pounds of chocolate (they didn’t come through after his piece appeared!). 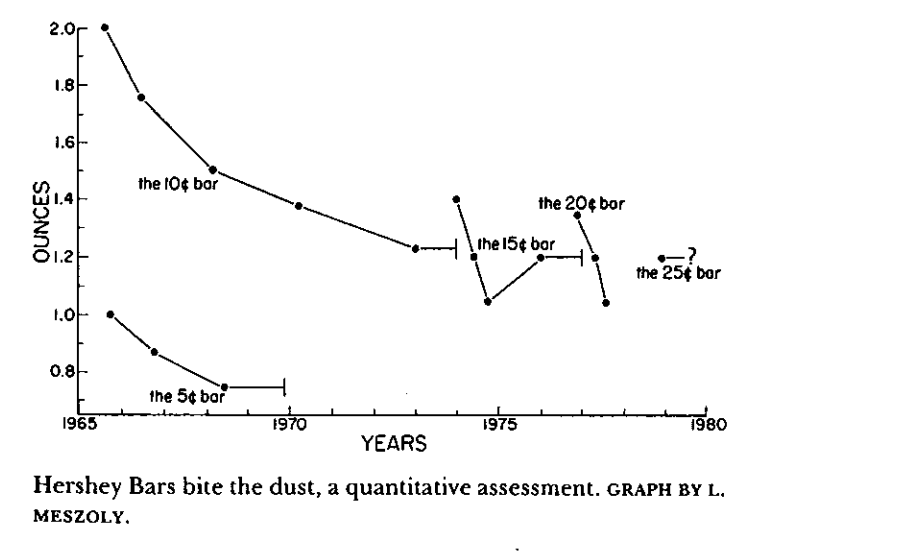 I haven’t bought a Hershey Bar in years, but I bet it’s a lot more than 25¢ now. And here’s one of his conclusions—classic Gould:

So, your lessons are these:

And get off my lawn!

95 thoughts on “The ice cream scams”