Good morning on Thursday, May 19, 2022: National Devil’s Food Cake Day. In the U.S. it’s also Malcolm X Day (he was born on this day in 1925) and Hepatitis Testing Day.  This gives me a chance to show my favorite scene from Spike Lee’s eponymous 1992 movie about Malcolm, when, with his family, he heads to the auditorium where he was killed, and so do the shooters.  The mesmerizing bits are the song (“A Change Is Gonna Come”, by Sam Cooke, my favorite soul song), and Lee’s patented scenario in which a character appears to roll instead of walk. This  is a great scene.  Malcolm is played by Denzel Washington.

When somebody asks me the rare question, “Are you happy?”, I nearly always answer, “I’m a Jew: the best we can do is ‘complacent’.”  But today I’m actually happy because Sammy the Stalwart Duckling was saved yesterday from a horrible life in Botany Pond. It still puts a smile on my face. I will push aside thoughts that this won’t be the last rescue of orphan ducklings we have to effect. Kudos again to Brandon, who saved Sammy, and I hope he gets in touch with me.

Gratuitous note: I had one of those academic dreams last night in which I had to take an exam but hadn’t cracked a book all semester. The school was Yale, and the subject was Assyrian.

* All of a sudden Ukraine has disappeared from the headlines, but the fact remains that Russia is still engaged in a war for the country. The good news is that Ukrainian soldiers appeared to have forced the Russians out of the country’s second most populous city, Kharkiv. The bad news is that the country is severely short staffed with medical personnel, with limbs that could be saved routinely amputated; and there’s a severe shortage of all things medical and medicinal. Finally, Mariupol is a lost cause, with the last Ukrainian soldiers evacuated to be used elsewhere. A WaPo estimate puts the civilian death toll in that city at around 20,000!

* The NBC Evening News reported last night on growing evidence that Hunter Biden committed crimes by taking money from Russia, with one expert saying “You don’t get off scot-free by robbing a bank and then returning the money.” I can’t find any story in the MSM backing up NBC’s allegations, which included massive spending by Hunter Biden on luxury items, but if the emails (the hard drive’s contents are now disseminated by Giuliani) prove genuine, it’s trouble not only for Hunter, but for his dad. Stay tuned. What NBC New reports as a big story (once denigrated by everyone) should not be ignored.

Thursday morning update:  The NBC site now has an article that gives more detail and leaves it unresolved whether Biden’s behavior was criminal. Here’s one excerpt:

From 2013 through 2018 Hunter Biden and his company brought in about $11 million via his roles as an attorney and a board member with a Ukrainian firm accused of bribery and his work with a Chinese businessman now accused of fraud, according to an NBC News analysis of a copy of Biden’s hard drive and iCloud account and documents released by Republicans on two Senate committees.

The documents and the analysis, which don’t show what he did to earn millions from his Chinese partners, raise questions about national security, business ethics and potential legal exposure. In December 2020, Biden acknowledged in a statement that he was the subject of a federal investigation into his taxes. NBC News was first to report that an ex-business partner had warned Biden he should amend his tax returns to disclose $400,000 in income from the Ukrainian firm, Burisma. GOP congressional sources also say that if Republicans take back the House this fall, they’ll demand more documents and probe whether any of Biden’s income went to his father, President Joe Biden.

Remember that most of the liberal media dismissed this as foreign propaganda; perhaps that accounts for their reluctance to report on the updates.

*Michelle Goldberg has an op-ed piece in yesterday’s NYT dissecting the Amber Heard/Johnny Depp defamation trial, a trial that I haven’t followed at all. Goldberg takes Heard’s side, and although experts have said that the couple engaged in “mutual abuse”, Goldberg sees Depp as the principal abuser, which may be true. But she exaggerates when she titled her column “Amber Heard and the Death of #MeToo” and by saying that this case presages the rise of a new misogny. Despite the Supreme Court, I’m confident that the #MeToo genie is out of the bottle.  Apropos, the NYT also has a column about the clothes that the accused and accuser are wearing on the stand, and what message they’re trying to convey both sartorially and in words.

*Although both Sweden and Finland have now formally applied for NATO membership, Turkey continues to try to slow down or block the applications.  From the Washington Post:

Turkey blocked the start of Finland’s and Sweden’s accession talks to NATO on Wednesday shortly after the Nordic nations submitted their applications, a signal of what could be a bumpy process to expand the alliance and reshape Europe’s post-Cold War security architecture.

Turkey’s resistance deprived Secretary General Jens Stoltenberg of the consensus he needed to move forward with the membership process. It also put a damper on a historic moment for two countries that held fast to military nonalignment until Russia’s invasion of Ukraine upended their thinking about security.

At a meeting of NATO ambassadors, Turkey said it still needed to work through some issues related to Finland and Sweden joining the alliance, according to two officials familiar with the discussion, who spoke on the condition of anonymity to discuss the sensitive closed-door talks.

Damn Erdogan! Atatürk will be rolling in his grave.

*As Slate reports, a footnote in Alito’s draft decision in the undoing of Roe v. Wade highlights a repugnant attitude: we should not allow abortion because forced birth assures a good supply of babies for others to adopt. (h/t Richard)

One of the most arresting lines in Justice Samuel Alito’s 98-page draft opinion reversing Roe v. Wade is a footnote that didn’t really surface until the weekend. A throwaway footnote on Page 34 of the draft cites data from the Centers for Disease Control and Prevention showing that in 2002, nearly 1 million women were seeking to adopt children, “whereas the domestic supply of infants relinquished at birth or within the first month of life and available to be adopted has become virtually nonexistent.” In response to the outrage and some misinformation, the conservative legal industrial complex went to great lengths to downplay it as a trivial footnote in a draft opinion, and to insist that Alito was citing the CDC and not himself and that the note appears in a roundup of “people are saying”–type arguments against abortion.

True. But the footnote reflects something profoundly wrong with the new “ethos of care” arguments advanced by Republicans who want to emphasize compassion instead of cruelty after the Dobbs v. Jackson Women’s Health fallout. Footnote 46, quantifying the supply/demand mismatch of babies, follows directly on another footnote in the opinion approvingly citing the “logic” raised at oral argument in December by Justice Amy Coney Barrett, who mused that there is no meaningful hardship in conscripting women to remain pregnant and deliver babies in 2022 because “safe haven” laws allow them to drop those unwanted babies off at the fire station for other parents to adopt.

This is, in effect, an argument for using women, against their will, as incubators to keep America supplied with infants.

*Finally, last night there was an NBC Evening News headline: “Taylor Swift graduates”. I was surprised because I didn’t know she was getting a degree. Well, she sort of did: she got a  Doctor of Fine Arts, honoris causa, from New York University, so it’s an honorary degree that doesn’t involve graduation.  (She left school at 17 to pursue music.)  Do we call her “Dr. Swift” now?  At any rate, she gave a 22-minute commencement address, which happened to be held at Yankee Stadium!  The speech is not bad for a singer, though it’s loaded with the customary commencement bromides.

Meanwhile in Dobrzyn, Hili is making more allusions to politics:

Hili: I’m going to the West.
A: Why?
Hili: East is more and more dangerous. 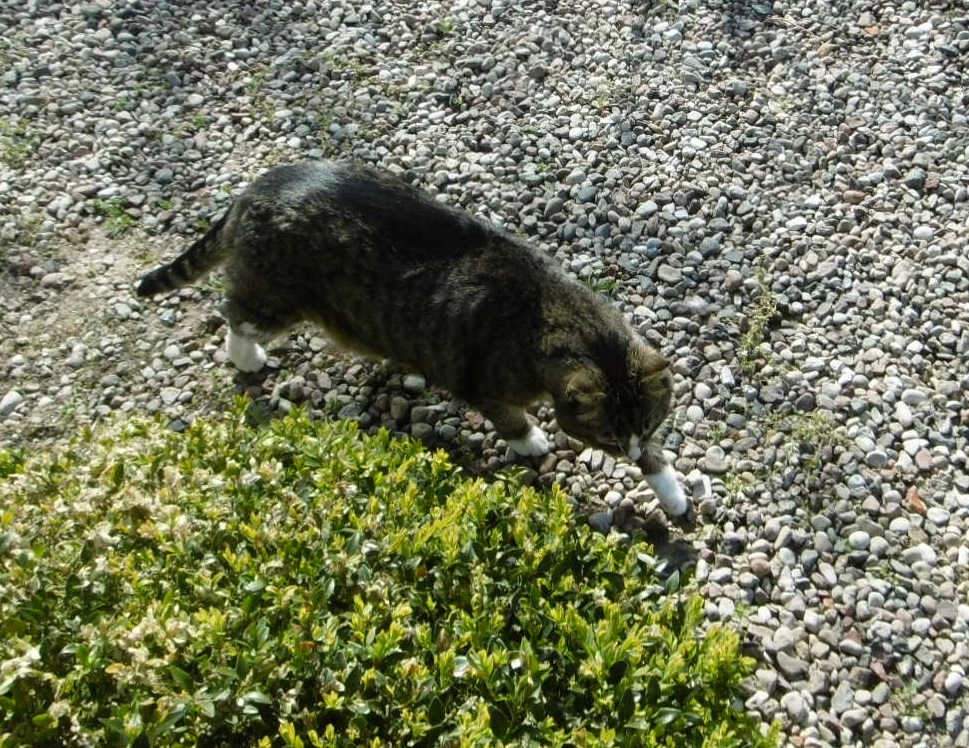 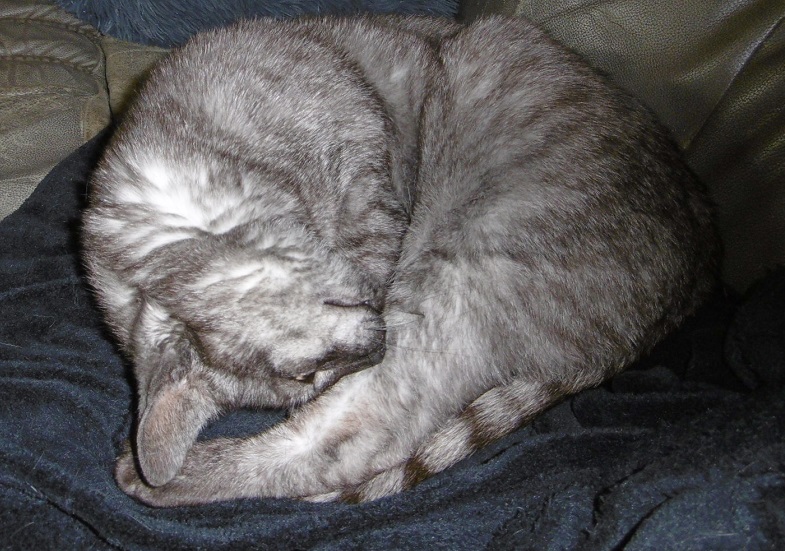 A friend is on a tour of The Cotswolds admiring thatched roofs today. She says the animals are the thatchers’ signatures. This one has ducks. 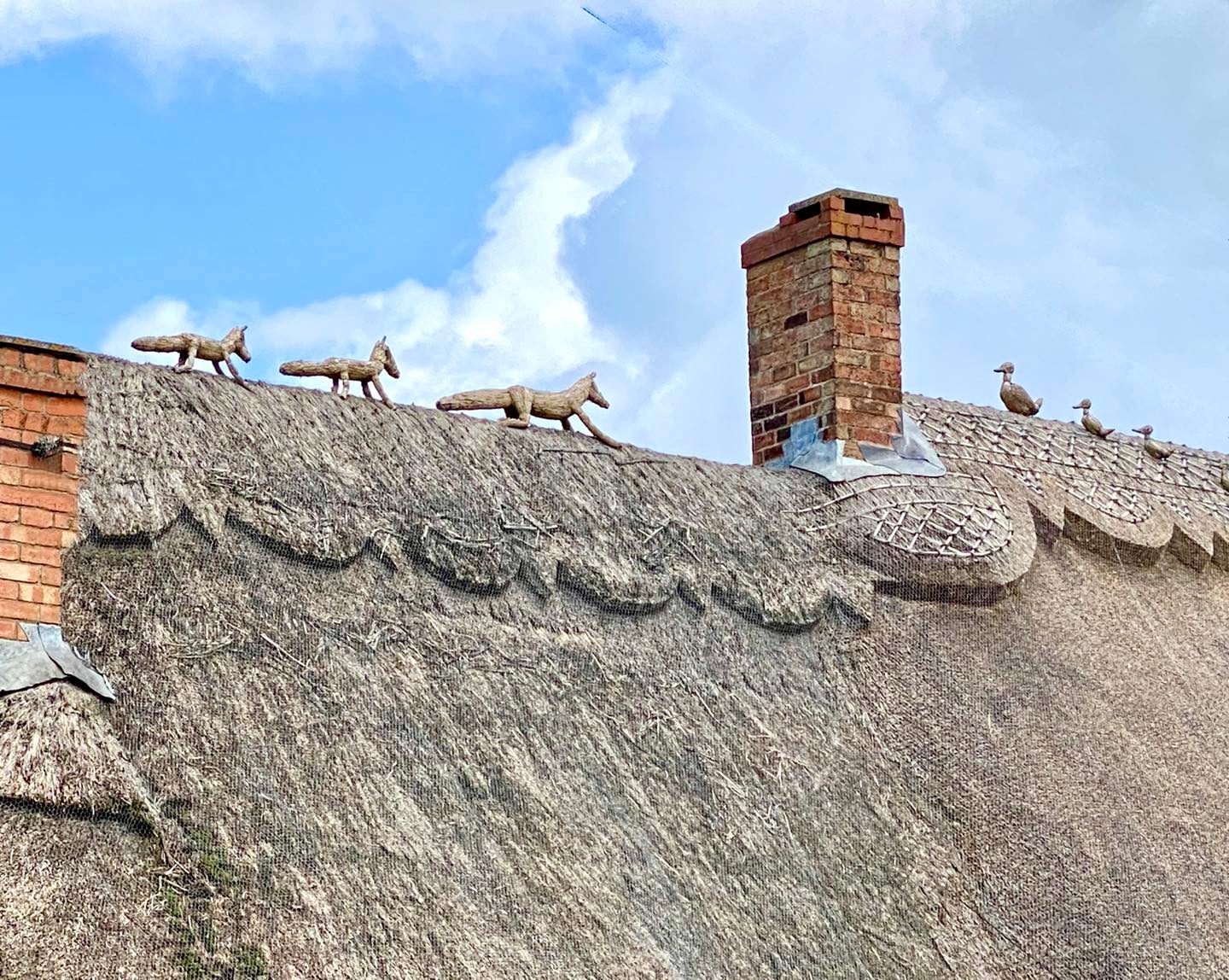 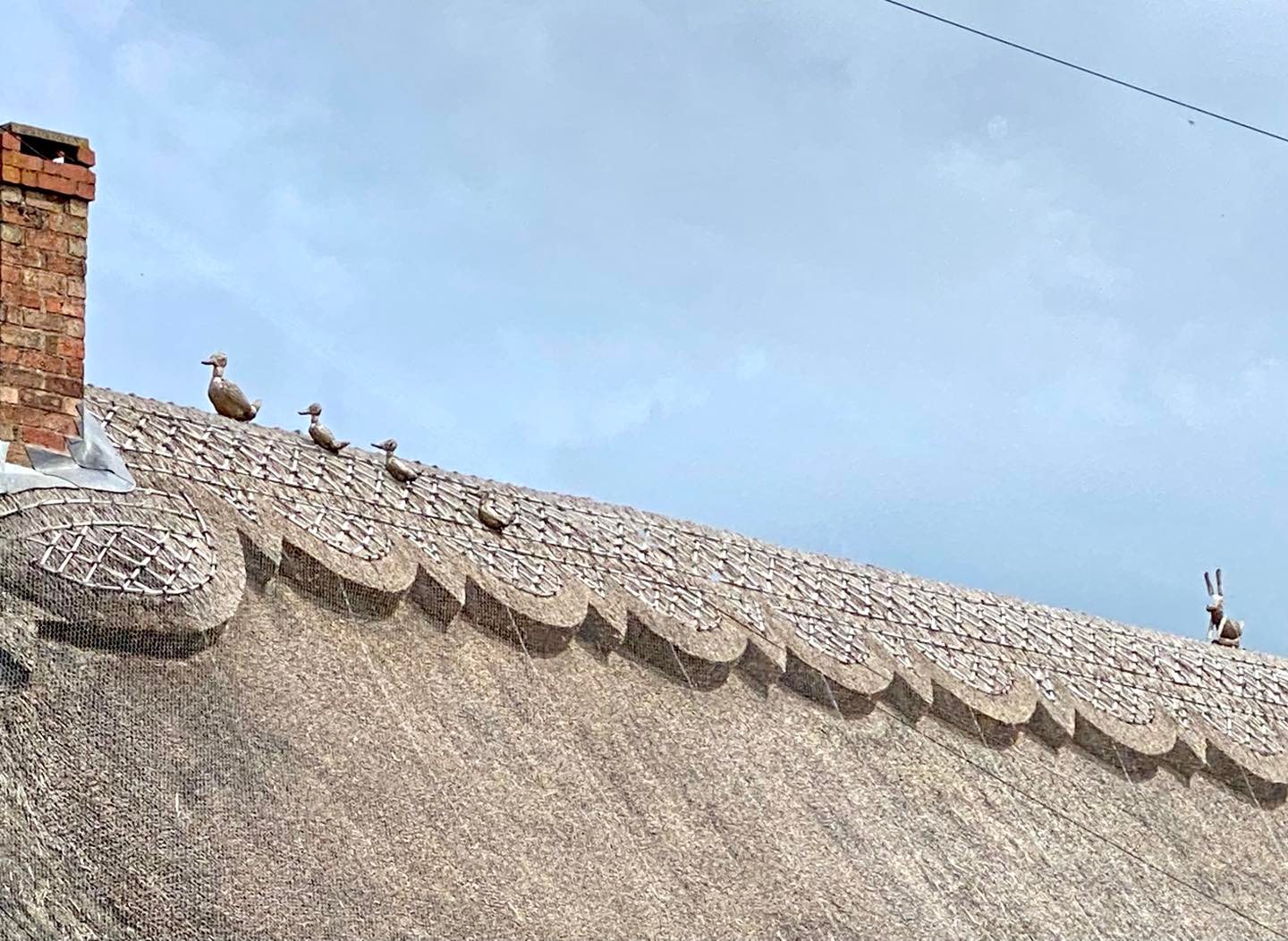 I try to avoid posting Far Side cartoons (Larson isn’t keen on reproducing them), but reader Thomas sent in this old gem (newly colorized) and I couldn’t resist: 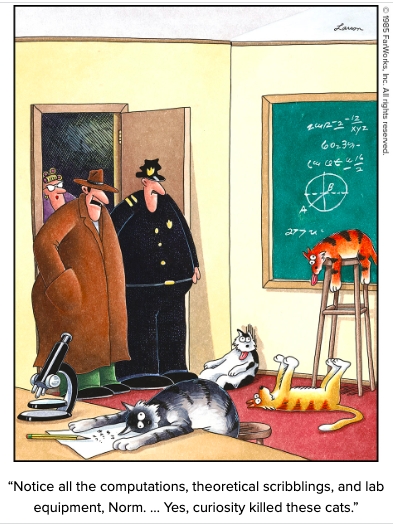 From “Ducks in Public”, a photo labeled “Ducks with Jobs”: 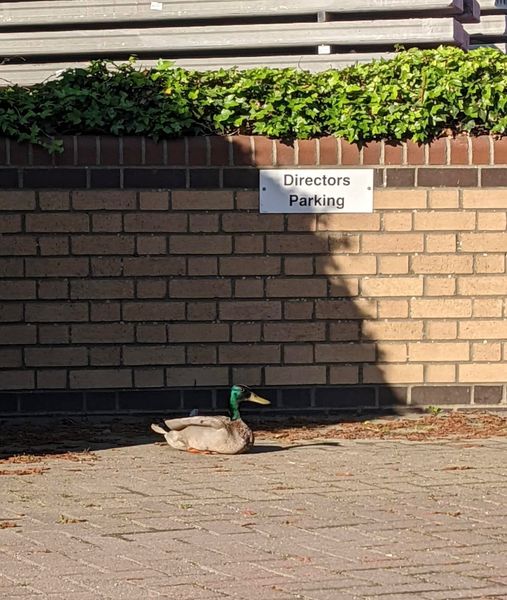 So that's why My neighborhood has gone to shit. pic.twitter.com/hgt3315KPP

This came from Barry, but I retweeted it:

This is almost beyond belief, but it looks to me like reciprocal altruism in turtles. https://t.co/CjZUjFUuBW

A book recommendation from Sam:

J. K. Rowling properly refuses to apologize, but I love the way she trolls the trolls:

Excellent question, Emma! Defining lesbians as same sex attracted women excludes and oppresses the most marginalised of all groups, ie, people with penises and beards who want to shag women. And before you say 'but aren't they straight men?' THEY'RE WEARING EYELINER, BIGOT. Jo x https://t.co/Rr7ga2Kr1H

Tweets from Matthew. You’re definitely going to want to look at some of the papers cited in the article these tweets refer to:

MAKE WAY FOR AN IMPORTANT SCIENTIFIC BREAKTHROUGH!
I've written up my findings, on searching through 32 million academic papers for swears hidden in the acronyms of the titles. https://t.co/lG2lvTuEJ8

This has to be true because it’s on Wikipedia. The famous stoic philosopher’s death is actually given in two different versions:

He died during the 143rd Olympiad (208–204 BC) at the age of 73. Diogenes Laërtius gives two different accounts of his death. In the first account, Chrysippus was seized with dizziness having drunk undiluted wine at a feast, and died soon after. In the second account, he was watching a donkey eat some figs and cried out: “Now give the donkey a drink of pure wine to wash down the figs”, whereupon he died in a fit of laughter.

Such is Wikipedia. However, this entry it referred me to a positive gem of a Wikipedia article: “List of unusual deaths.” Don’t miss the 1988 deaths of Cachy the Poodle, Marta Espina, Edith Solá, and an unidentified man, all in one incident:

just had to be there pic.twitter.com/l7mfHZSvmE

A happy story of a newborn lame found frozen and apparently lifeless. I show only animal stories with happy endings. Sound up:

A little video of what ‘intensive care’ looks like for a lamb (on our farm anyway).

New born lamb was found lifeless in the heavy rain, quick action means hopefully this little lamb will be ok!

Volume on to follow the commentary and explanation to what’s happened. pic.twitter.com/iydRiWCyF2

Matthew loves swifts, swallows, and martens, and here’s one about to snarf an insect in mid-flight:

First decent pic of a Chimney Swift and it’s about to grab a snack! pic.twitter.com/OMORNexAYx