On April 1, I announced my nephew’s nominations for the “Golden Steve” awards: those awards that he modestly names after himself and which he presents as an alternative to the Ac*demy Aw*ards, awards he despises. Steven is a big film buff and knows his onions, and I’ve found it wise to pay attention to his choices.

Now he has announced the winners, which he’s put in bold under nine of the ten categories.  (The tenth, best original song, went to “No Time to Die,” No Time to Die, by Billie Eilish and Finneas O’Connell).

I have to admit that I’ve seen only one of the nominated pictures and performances:  the Japanese movie “Drive My Car“, which I saw on the plane flying back from Lisbon yesterday. Even on the small seatback screen it was a superb and powerful movie, which of course the critics liked better than the public (below are the Rotten Tomato reviews; click to read). It’s a film that’s slow-paced (like many of Steven and my favorites), and will appeal to those who want windows onto life and don’t require chase scenes and shoot-’em-ups.

The tale, in short, is of two characters who experience great loss but come to epiphanies after one of them, a theater director, stages Chekhov’s Uncle Vanya.  See it! It’s not an all-time masterpiece like Tokyo Story, Ikiru, or The Last Picture Show (note that two of these three are Japanese), but it is certainly one of the best movies I’ve seen in the last few years.  The film “became the first non-English-language film to win Best Picture from all three major U.S. critics groups (the Los Angeles Film Critics Association, the New York Film Critics Circle, and the National Society of Film Critics).” 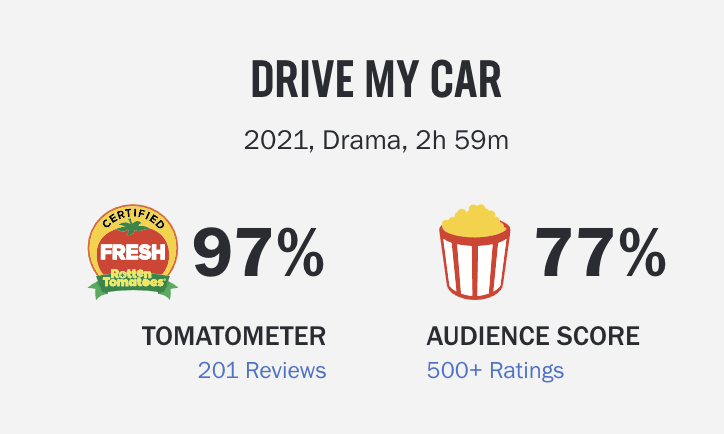 Now the nominees, with the winners given in bold.

And here’s the winning song, from the eponymous James Bond film (why don’t they stop making them now that they’ve run through Ian Fleming’s books?):