My nephew Steven’s website now has only about one post per year: his list of the “Golden Steve Awards”—both nominees and winners for Steven’s best movies of the year. In the post below (click on screenshot), you can see his nominees from this year, but in the post below I list only the Big Six categories plus “Best Foreign Film” (the latter for the reason given below).

The winners from each of the categories below will be announced on April 10.

My nephew cannot be described as modest, but he knows his onions, so I’d pay attention to his choices and view them if you can.

I quote Steven’s introduction to the nominations

Far and away the most coveted of motion picture accolades, Golden Steves are frequently described as the Oscars without the politics. Impervious to bribery, immune to ballyhoo, unswayed by sentiment, and riddled with integrity, this committee of one might be termed in all accuracy “fair-mindedness incarnate.” Over 165 of the year’s most acclaimed features were screened prior to the compilation of this ballot. First, some caveats:

1) Owing to a lifelong suspicion of prime numbers, each category comprises six nominees, not five.

2) A film can be nominated in only one of the following categories: Best Animated Feature, Best Non-Fiction Film, Best Foreign Language Film. Placement is determined by the Board of Governors. Said film remains eligible in all other fields.

3) This list is in no way connected with the Academy of Motion Picture Arts and Sciences—a fact that should be apparent from its acumen. Please look elsewhere for Oscar analysis.

And I’ll add this category, since Steven mentions if below.

When I asked Steven what he thought of the “offcial” Oscar awards, he said this:

I don’t agree with any of the main winners, and would nominate only Campion. CODA is predictable, feel-good pabulum. Its win derives from a ranked balloting system in place since 2009, in which voters order their choices from 1-10 instead of checking the box of their favorite film. As such, it’s better to be everyone’s second or third choice than divisive (and possible to win without a single #1 vote). But of course nearly all great films are divisive, and middle-of-the-road picks like The King’s Speech, Argo, Green Book, and now CODA are black marks on the Academy’s record.

A rare bright spot was the victory of the truly exceptional Drive My Car. It’s the first Japanese film ever nominated for Best Picture, and a most deserving choice for Best International Film. 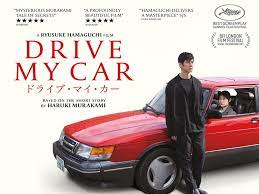 And here are the Rotten Tomatoes ratings (click on latter to read critics’ reviews): 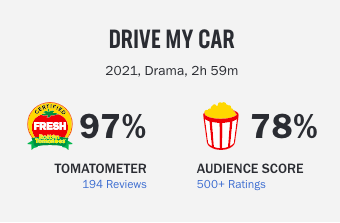