We will have two posts on Madeira based on our one-day visit. This one gives a brief overview and then shows the artistic doors of the island’s capital city.

We have landed in Funchal on the southern part of the island of Madeira, which itself is Portuguese. (With a population of about 100,000,, a cute town, a market, and access to a lovely botanical garden, Funchal is the island’s largest city and its biggest tourist destination.)

The cruise tracker shows us here: 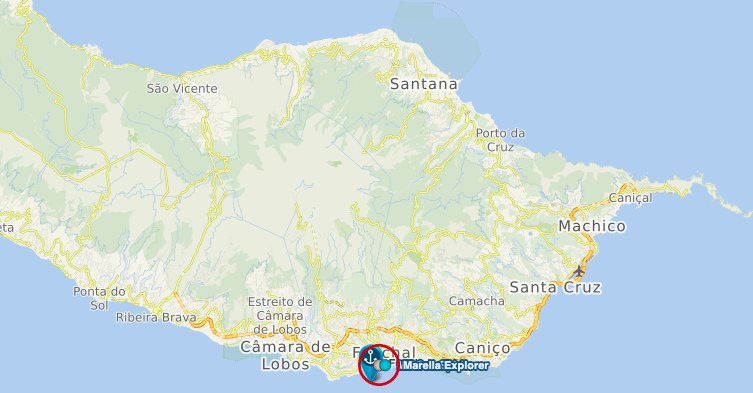 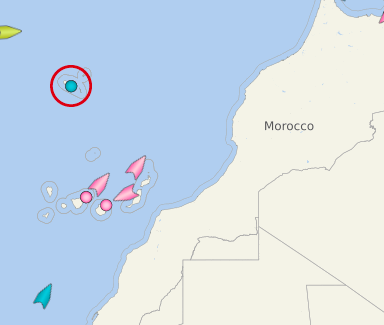 Through my cabin window: another gorgeous day: 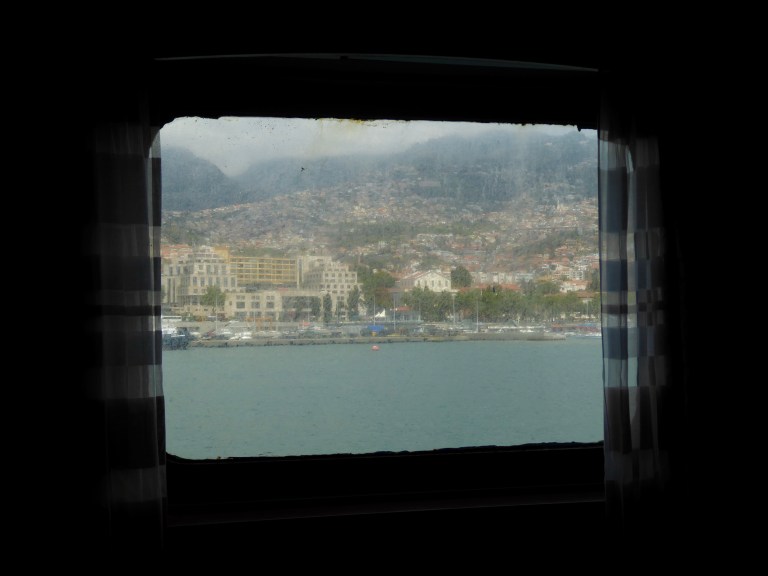 Here’s Funchal from the Botanical Gardens about 500 m up the mountain (more on the plants in the next post). The Gardens also houses the still-occupied mansion of the Blandy family, which got rich making Madeira wine  (If you’ve drunk Madeira, you’ve undoubtedly had their wine.)

See our ship way below? (Go to next photo) 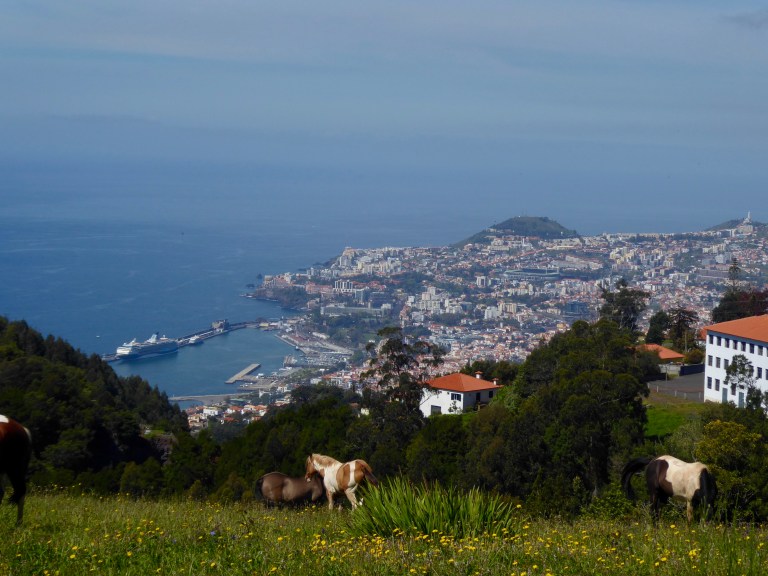 Our ship (arrow) which is dwarfed by a regular cruise ship: 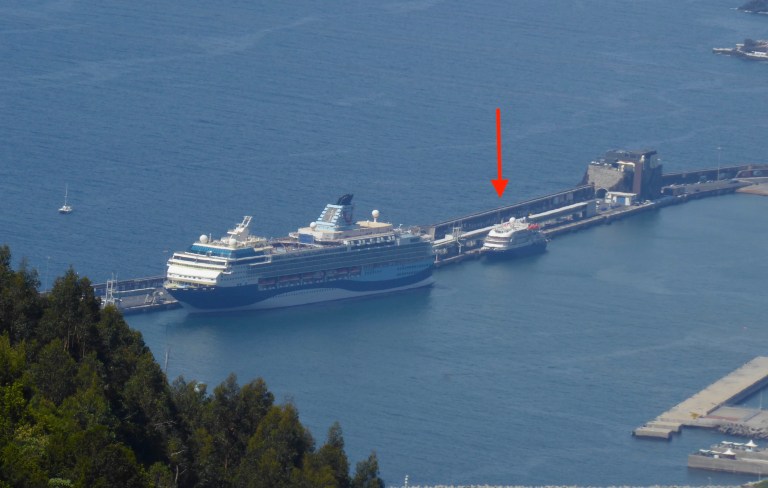 We were told that when the city was seedier and a haven for sailors, prostitutes, and other such trade, the city fathers decided to encourage people to paint their stores and houses as a way of restoring respectability. Funchal is now plenty respectable and prosperous, and the doors are lovely. Here are a few:

A restaurant with a well fed customer. Can you spot the cat? 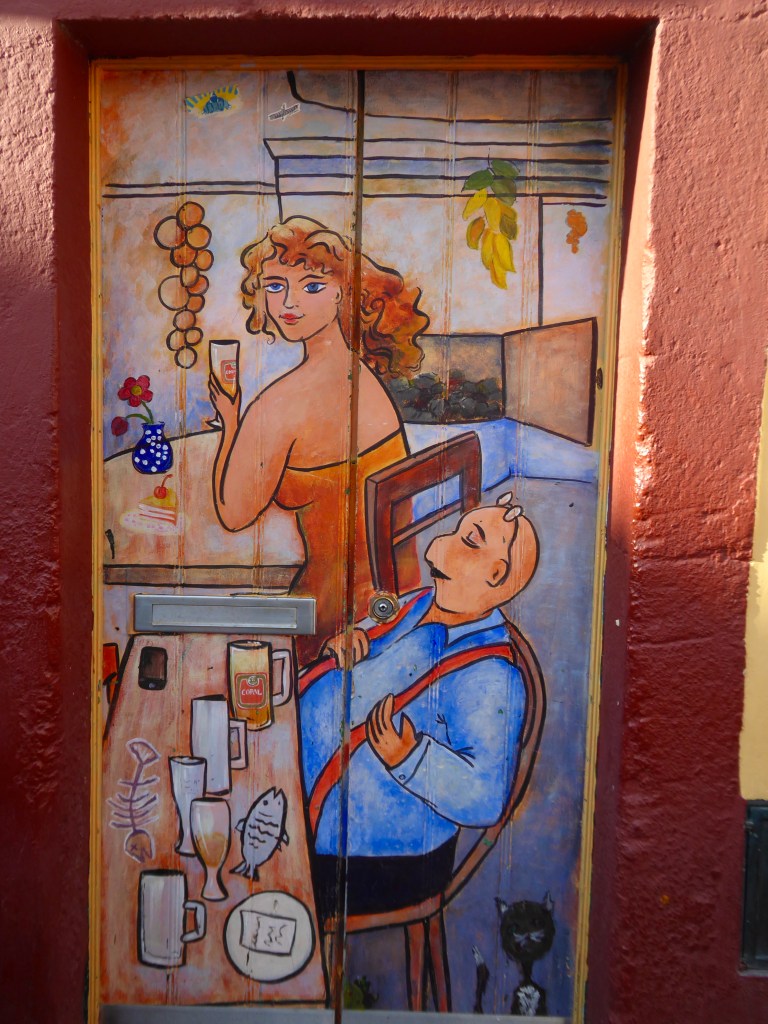 Also on a restaurant: a traditional drink for returning sailors made with rum, honey, and sugar. We were told it was served warm, so it would be a hot toddy. 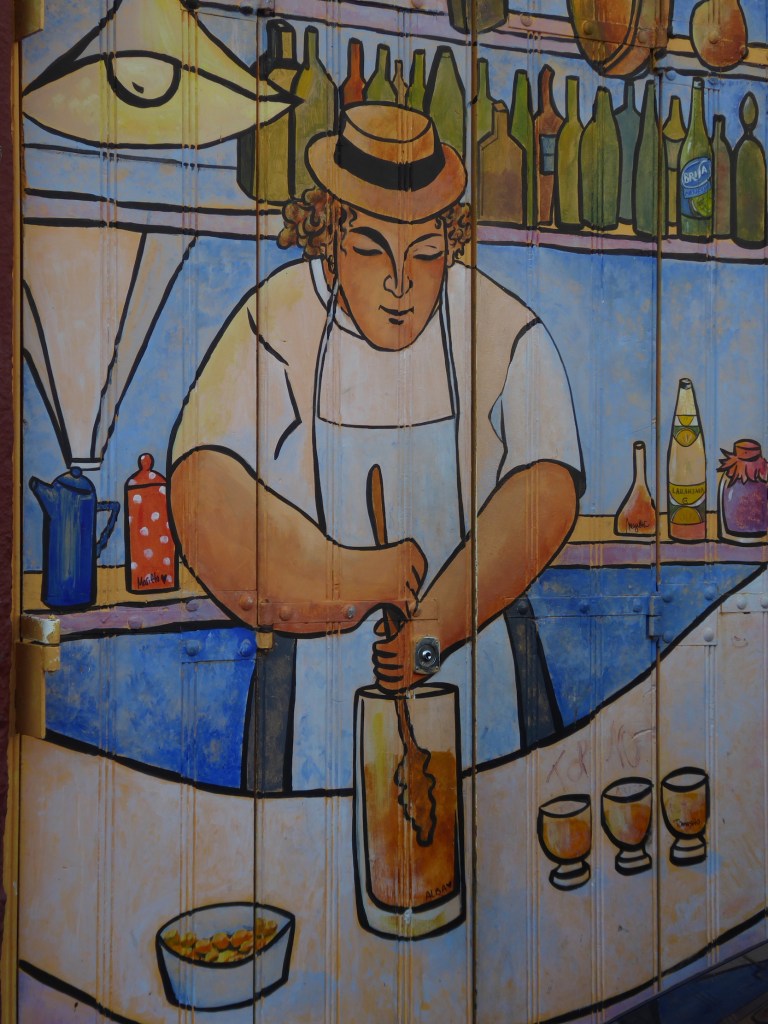 A Berber, presumably from Morocco: 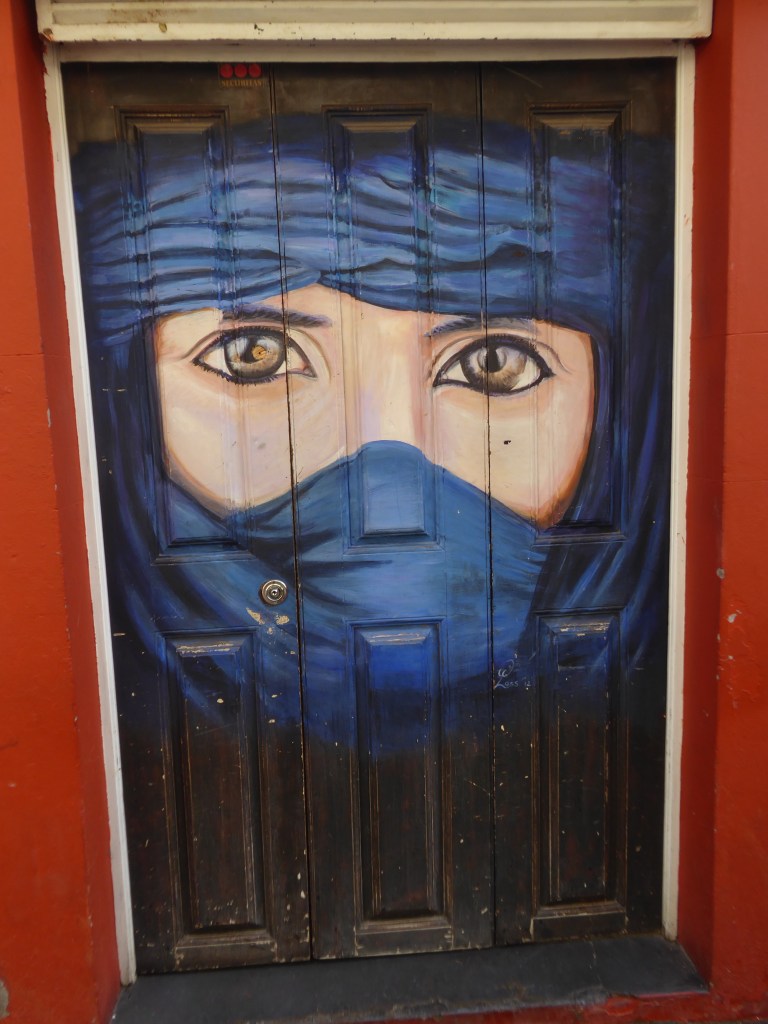 Cats are in many of the door paintings: 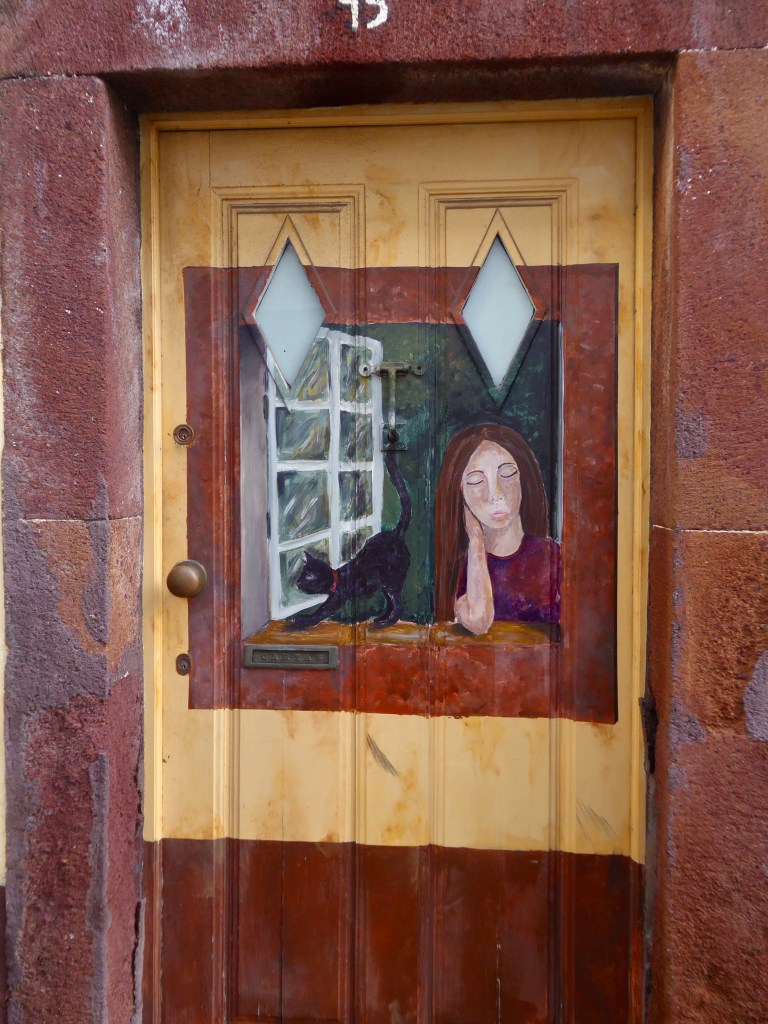 A DUCK STORE! I would have gone in, but we were on a tour: 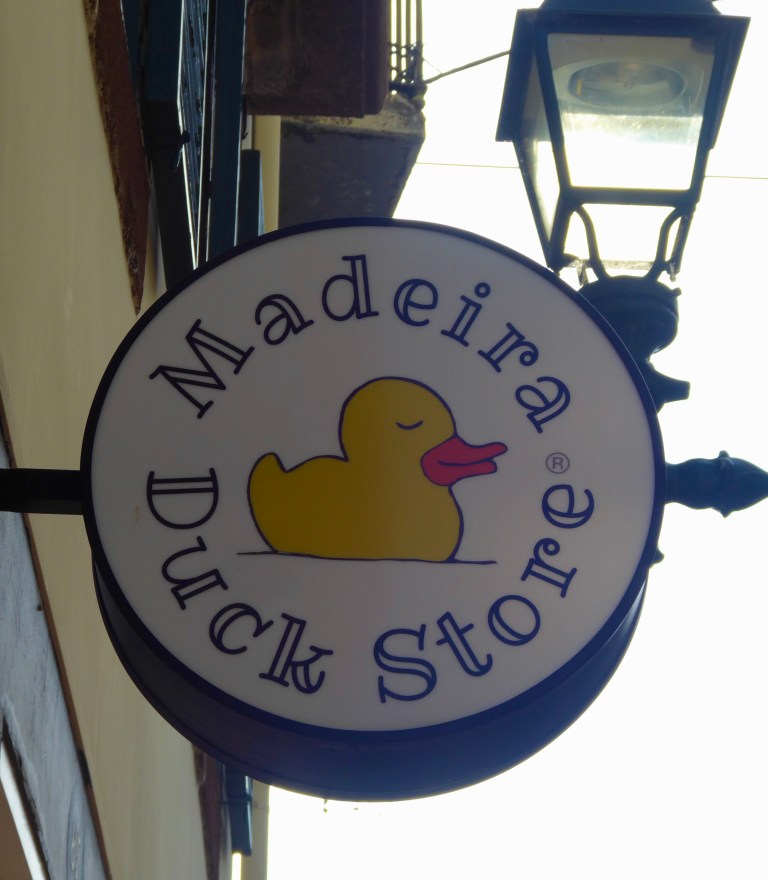 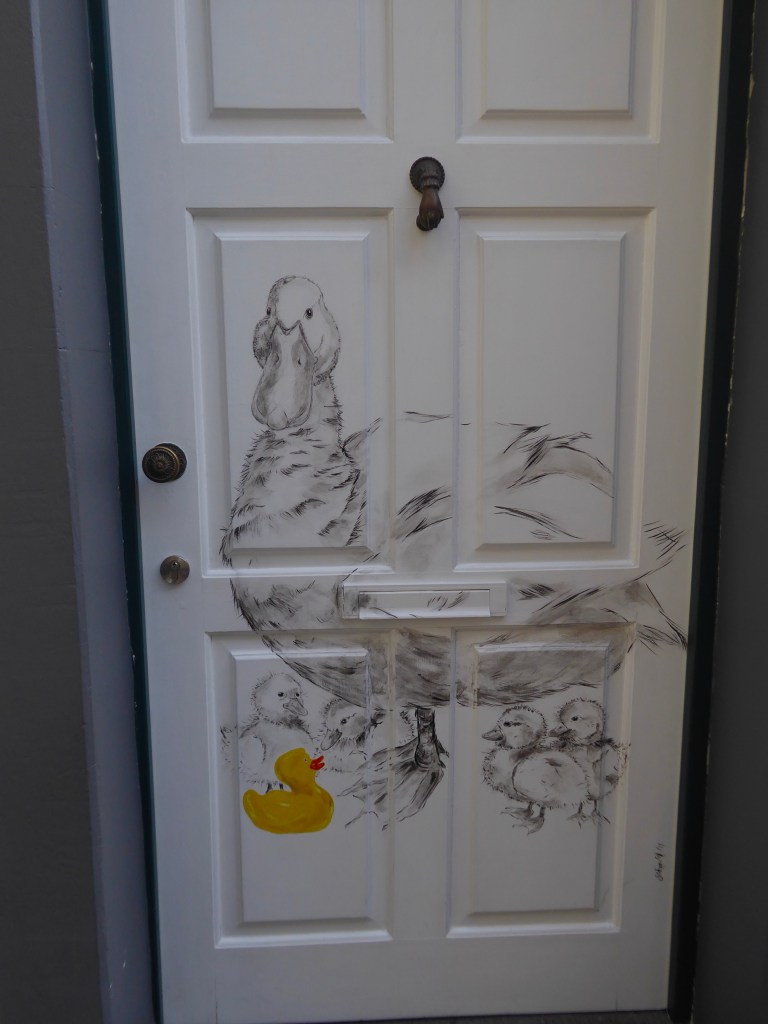 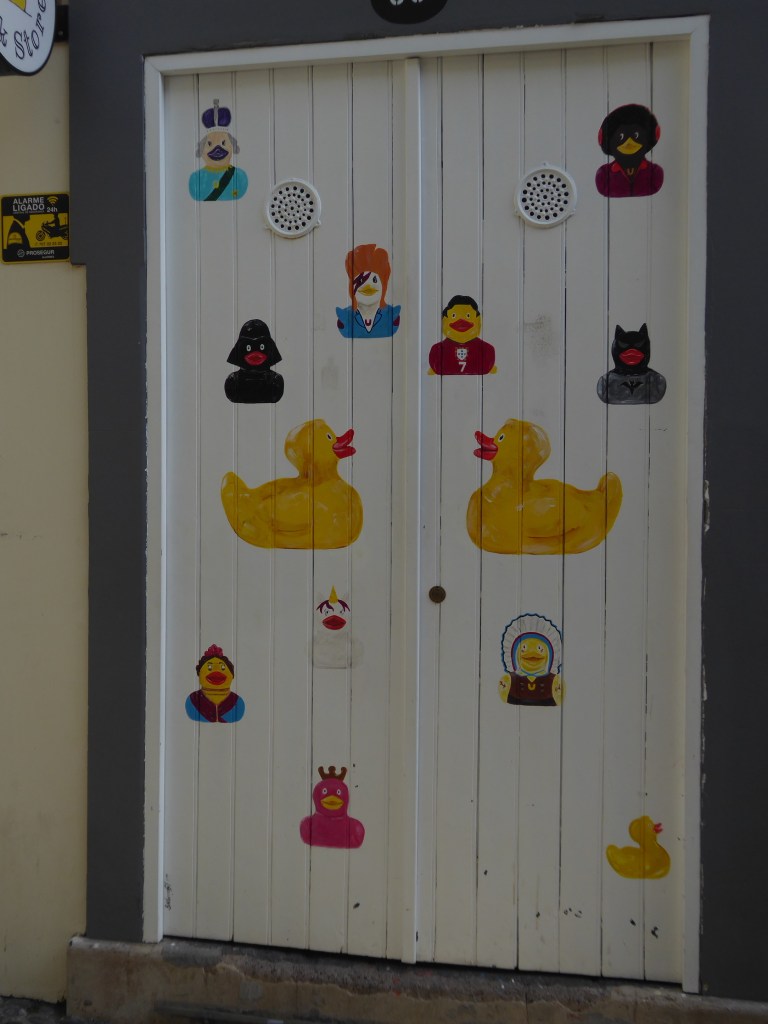 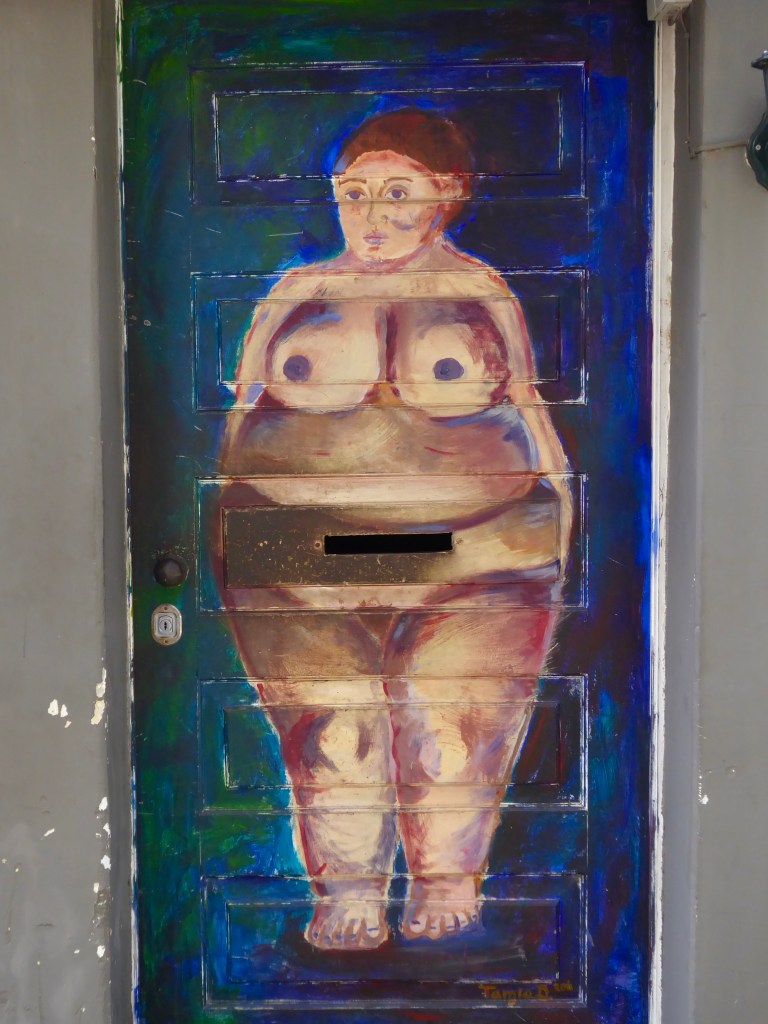 A bookshop with book-y doors: 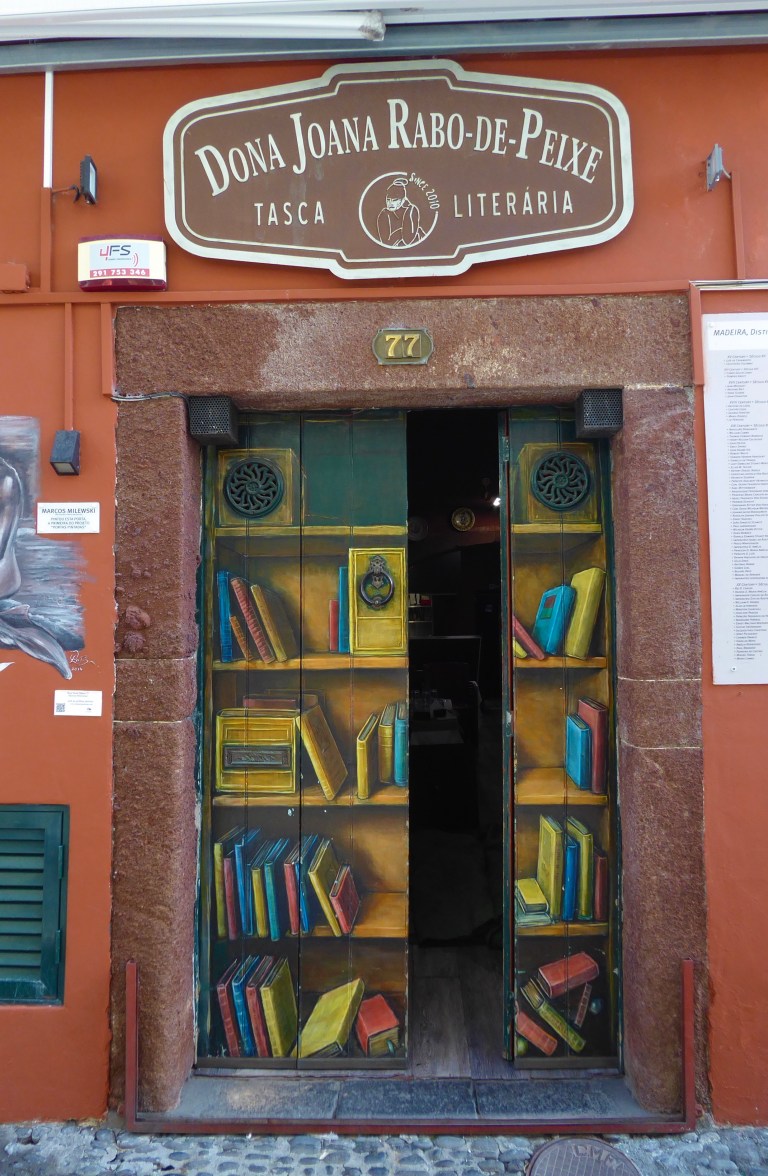 Can you spot the cat? 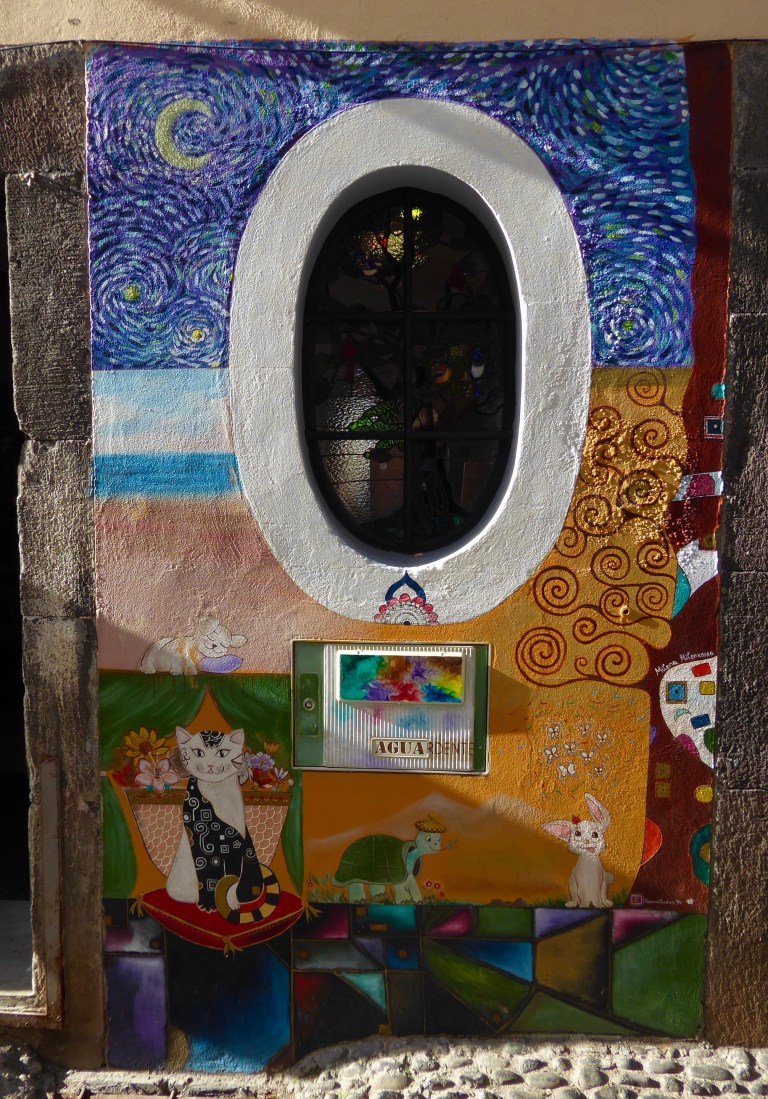 These are my two favorites. There were many more doors, but no time to photograph them! 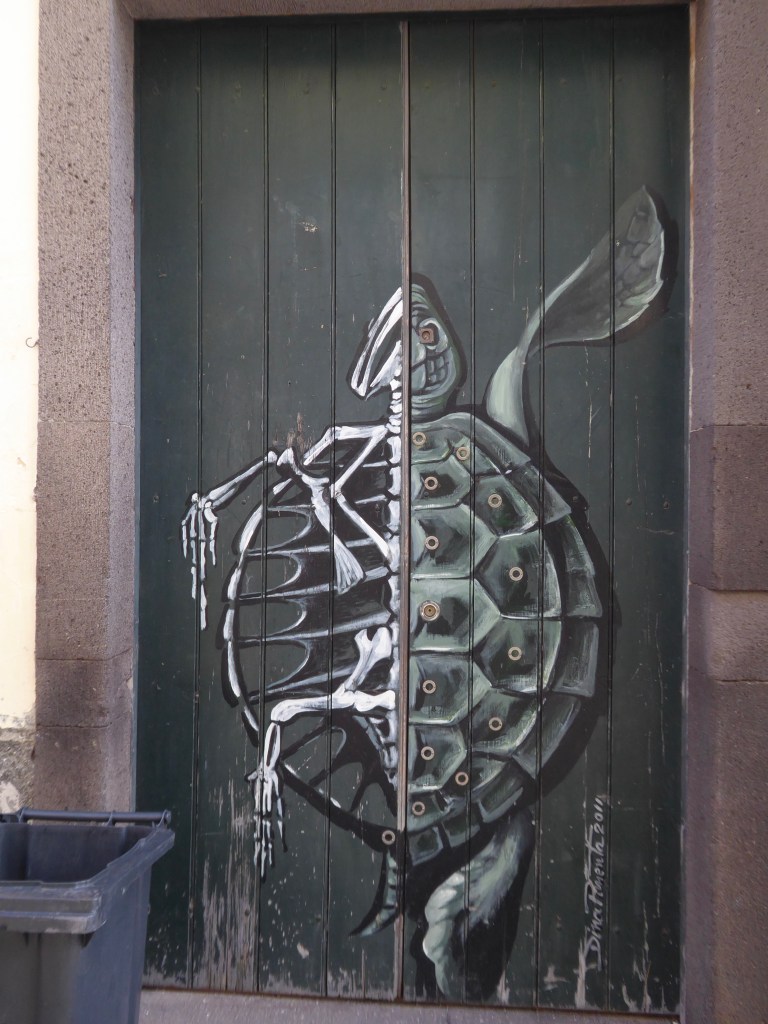 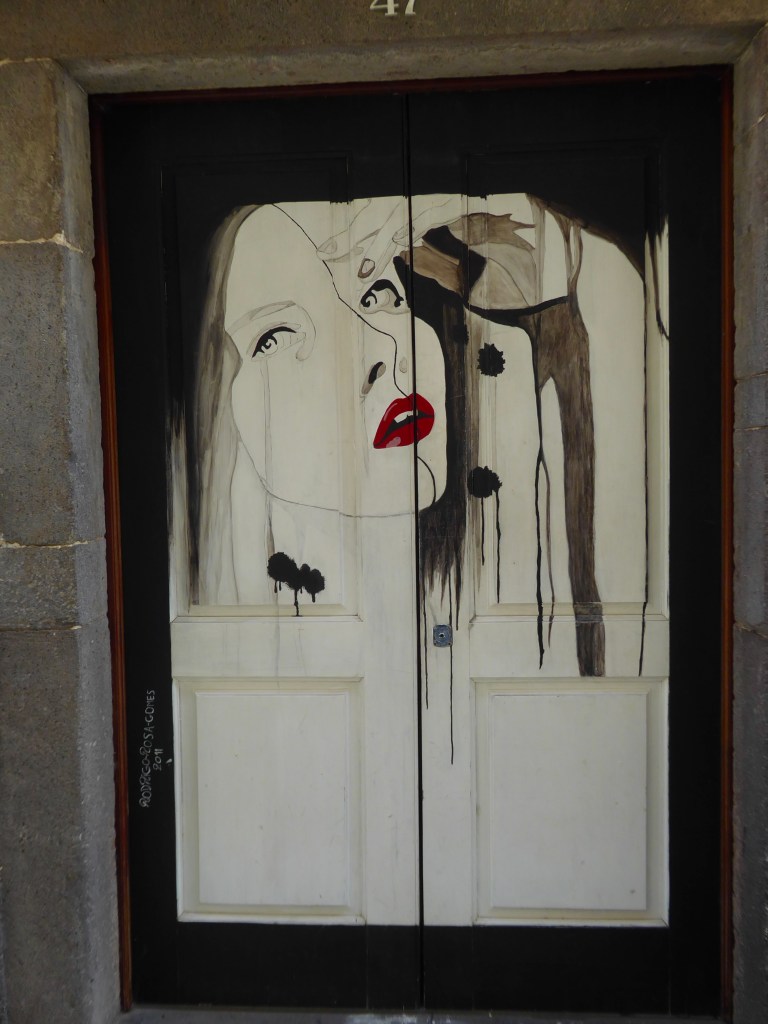 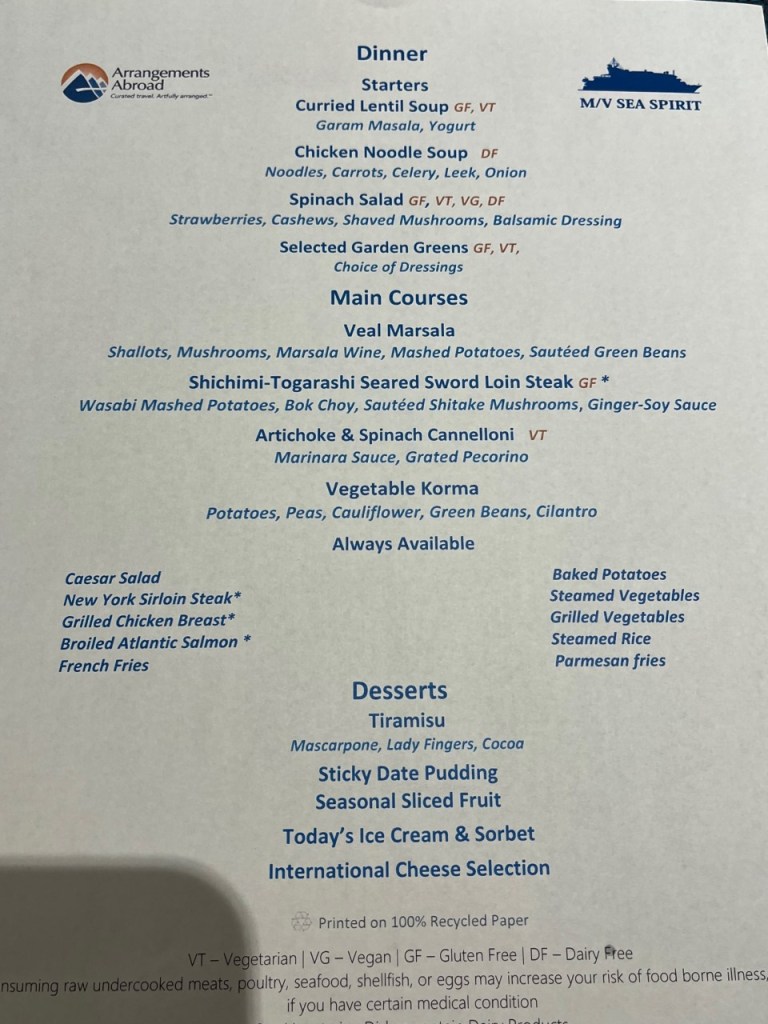 I didn’t feel like eating baby cow, and I’m not much of a piscivore, so I did what one reader suggested the other day: ordered the sirloin steak, which is always available. First, though, a spinach salad: 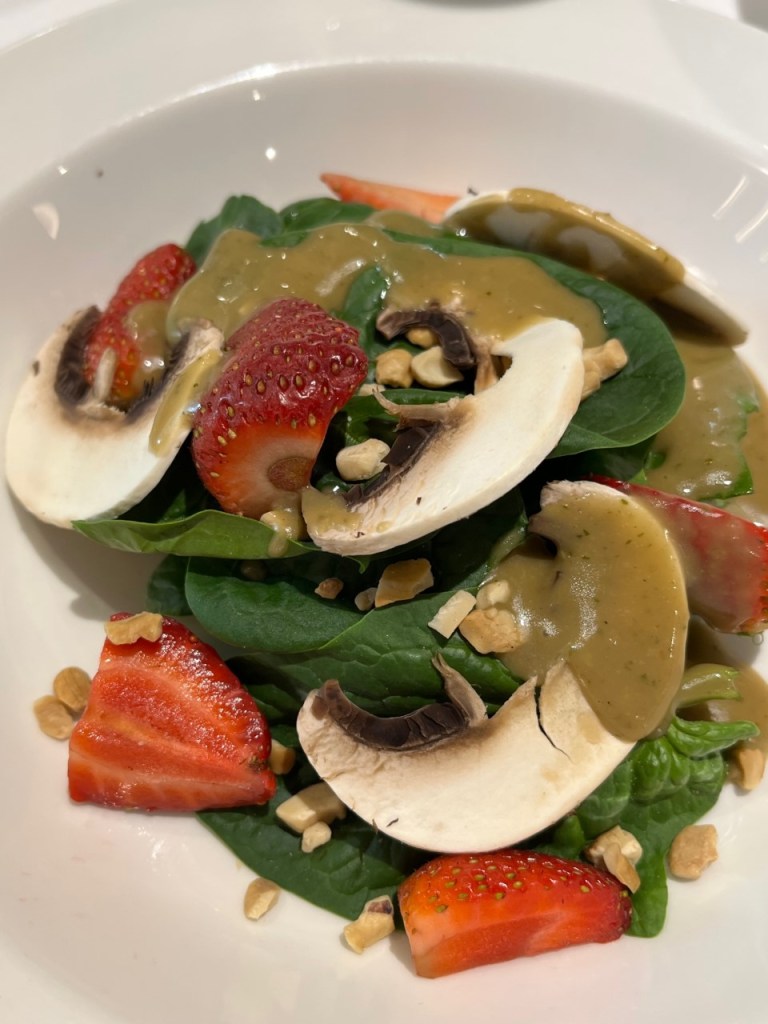 Sirloin steak ordered rare but cooked medium rare, or even a tad more. It was okay but next time I’m going to order it “mooing”. It’s hard to cook such a thin steak rare on the inside and cooked on the outside. 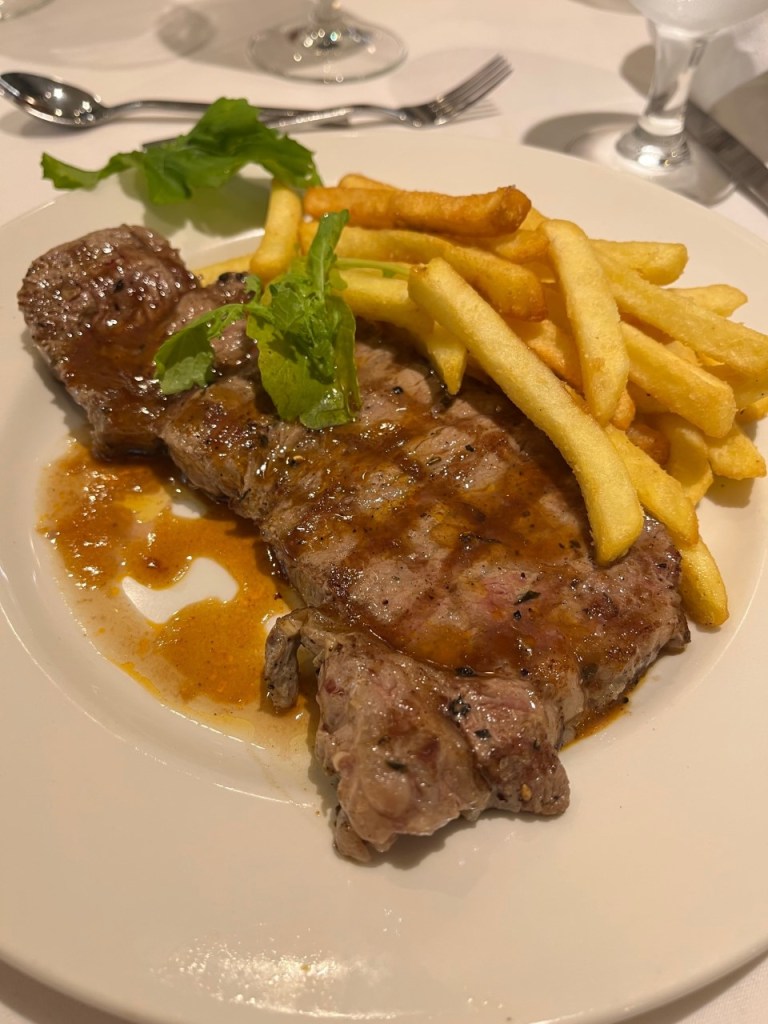 Sticky date pudding with spun sugar ornamentation. As usual, this was the best course: 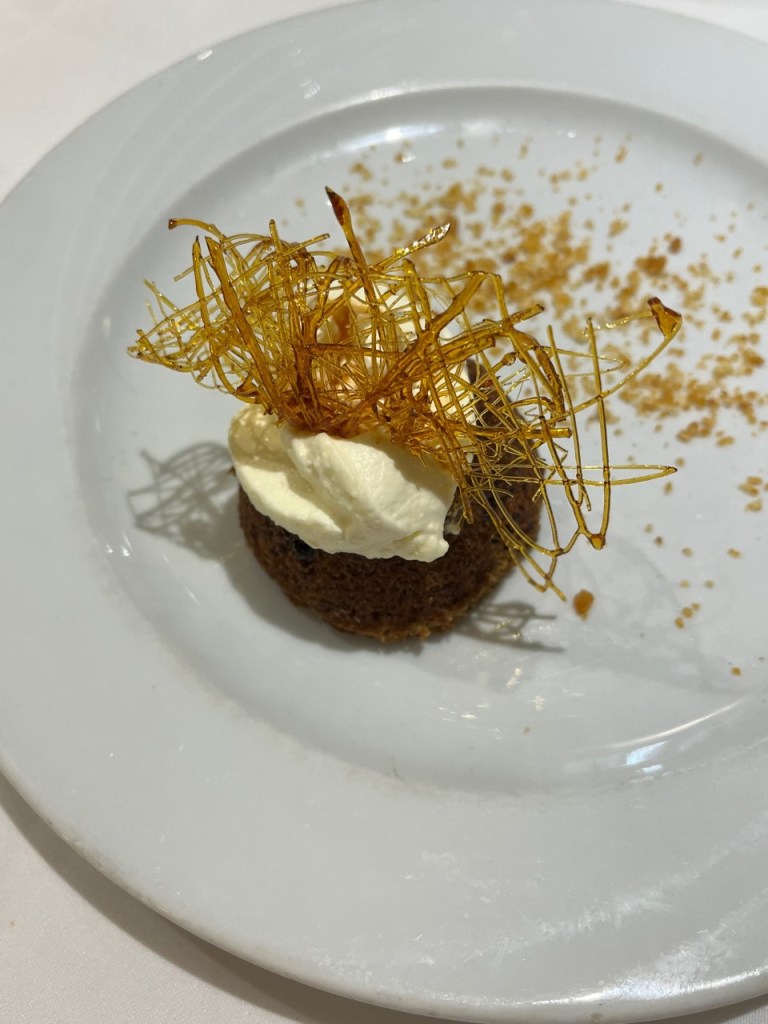 27 thoughts on “Madeira and its doors”