UPDATE: I have removed the photos from the new paper as the authors have copyrighted them and won’t give me permission to use them. , but you can see them at the site.

In 2005, a paper in Science by Fitzpatrick et al. produced a flurry of ornithological excitement. The paper (click on screenshot below) adduced evidence that the Ivory-billed Woodpecker, Campephilus principalis—thought to have been extinct in the US (and elsewhere) since about 1940—was actually persisting in wet lowland forests of the South.  This was based on sightings and recordings of calls, but the photographs weren’t that convincing. Nevertheless, the authors declared that the bird persists: click on the screenshot to read.

This magnificent beast, the third largest woodpecker in the world, used to have a fairly broad range across the South, but was limited to wet lowland forests with very old trees. Loss of habitat caused a big popuation decline, and fewer and fewer sightings were made. Here’s a photo of a male from Louisiana in 1935, and another, showing both sexes, is colorized below: 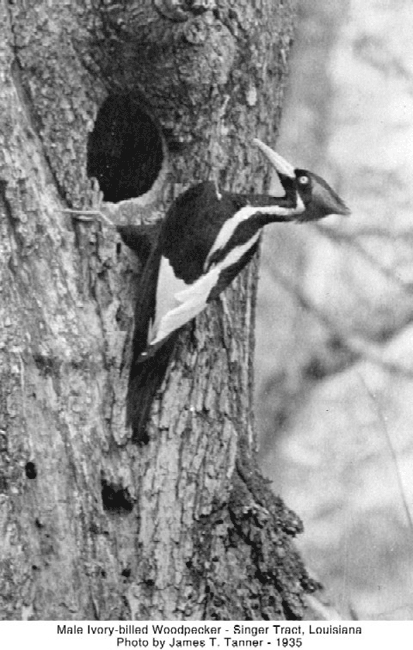 As you can see from the second photo, one distinctive feature of this bird is the sexual dimorphism in crest color: males have red crests and females black ones.  Ivorybills also have a distinctive white “saddle” on their back, and white patches on the wings. These features, and the larger size of the Ivory-billed, distinguish it from a similar species, the pileated woodpecker (Dryocopus pileatus), the largest woodpecker known to exist in the U.S. (many of us have seen them).

Here’s a comparison of both species that I showed when I wrote about the Ivorybill in 2010. Note the white saddle of the Ivory-billed, absent in the pileated, and the sexual dimorphism of the crest. Also, there are differences in facial coloration. It is the superficial similarity of the ivory-billed to the pileated that has led people to declare that, after seeing the latter (they co-occurred), the former was still around. 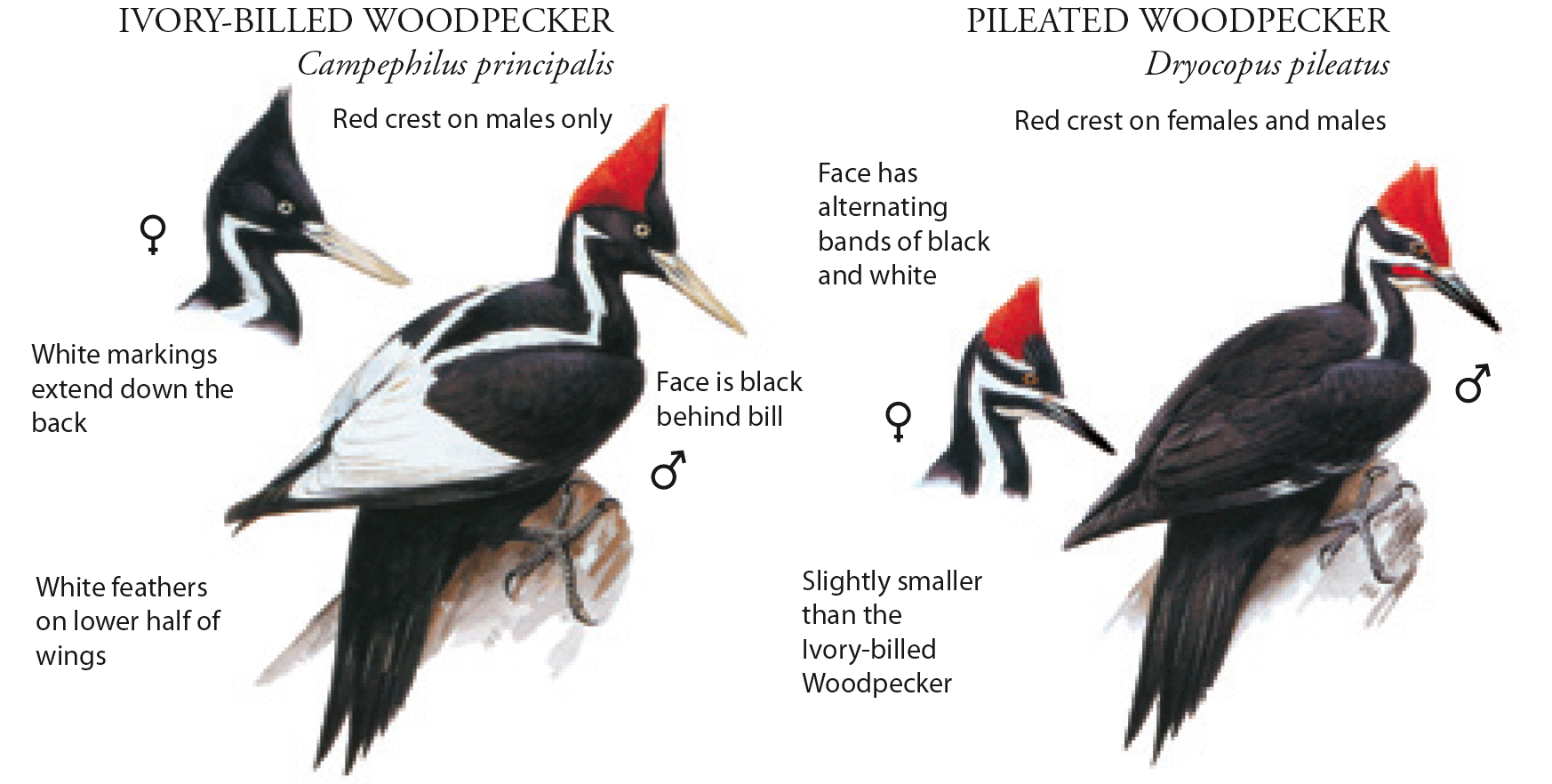 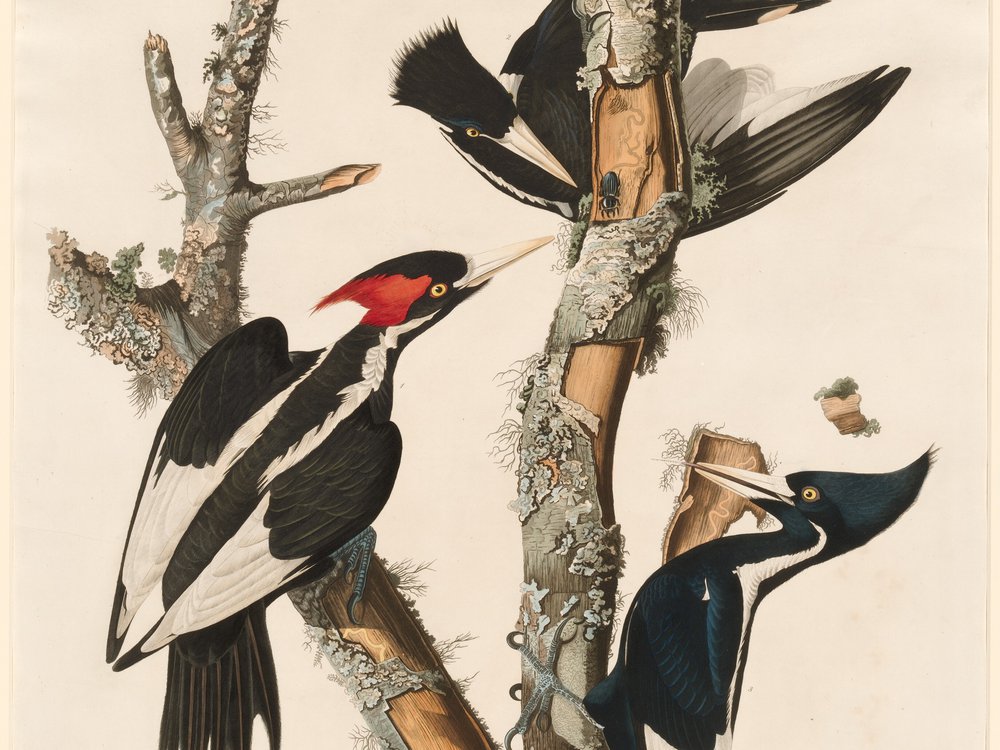 And a drawer of preserved ivorybills from Harvard’s Museum of Comparative Zoology (again note the sexual dimorphism):

But over the years after 2005, repeated forays into Louisiana bottomland—the people who see these things tend to keep the locations secret as the places would get overrun with birders and gawkers—failed to turn up convincing evidence of the bird (a really good couple of photos or videos would do). And despite a movie made about the “rediscovery”, Ghost Bird (and a presentation on YouTube), people lost confidence that this elusive bird was still around, and interest waned. Except among a small group who have just published a paper.

On September 29 of last year, the U.S. Fish and Wildlife Service declared the Ivorybill, along with 22 other species, extinct.

And so, apparently, this woodpecker joined the passenger pigeon and Carolina parakeet as one of America’s most famous extinct bird species. It was declared an ex-woodpecker, singing with the Choir Invisible.

But wait—not so fast! I was alerted to a new paper by this tweet from Matthew, linking to a paper that gives pretty convincing evidence that the Ivory-billed Woodpecker is still around, though not numerous.

Anyone interested in ivory-billed woodpeckers should read this paper and especially look at the images and videos. Taken together, this evidence seems conclusive.

Multiple lines of evidence indicate survival of the Ivory-billed Woodpecker in Louisiana https://t.co/DmhXIteNrG

I’ve read the paper, as have two of my ornithological colleagues, and both declare that the evidence in the paper below is fairly strong. Click on the screenshot to read it, and download the paper here.  Do note that this is an unpublished manuscript, and appears on bioRχiv. It must be reviewed and published before its credibility can increase.

What’s the evidence? Well, the authors scoured a 93 km² (36² mi) area of Louisiana bottomland and mosaic upland for ten years, using both high-flying drones (for 3 years) and trail cameras, and came up with a number of photos, as well as recordings and videos (the photos are the evidence they present. There were 438,000 camera hours of watching and about 1590 drone flights. The evidence, as they say above, is multifarious. It includes these features:

Enlarged: left column is an Ivorybill photographed years ago in Cuba (where they once lived as well), and the right column shows a new photo and enlargement:

The bird they photographed is also larger than related species photographed on the same tree. Here’s another photo.

There are also apparent differences in crest color seen in some photos like this one, with one member of a pair having a red crest and the other a black one:

2.) Behavior. The ivorybill has a different morphology of feet and legs from that of other woodpeckers.  This results in a very different stance of the ivorybill when it’s sitting on a vertical trunk.

Most intriguing is that these images depict the distinctive morphological adaptations of the feet and legs of Campephilus woodpeckers as compared with Dryocopus woodpeckers like the Pileated Woodpecker (33). The phenotypically similar Pileated is one of the most unspecialized of the truly arboreal woodpeckers, while the Campephilus woodpeckers are characterized by pamprodactyly, a pedal morphology that enables the forward rotation of all four toes (33). The specialized modifications in the highly arboreal Ivory-billed Woodpecker are not so much in the structure of the toes as in the position of the legs. The feet are held outward from the body and are directed diagonally upward and sidewise (Figure 7), with both feet wide apart and more anterior relative to the body (33, 34). Usually the angle between the tarsi and the horizontal plane is ≤45˚, and often seem to be pressed against the tree trunk. This is very different from the condition seen in most woodpeckers, as, for example, the Pileated Woodpecker, where the legs are held more or less beneath the pelvic girdle, the joints are fully flexed, and the tarsi are held well away from the tree trunk. This generally results also in a more obtuse angle of the intertarsal joint (where the leg bends between the tibiotarsus and the tarsometatarsus), and is evidence of the better scansorial adaptations of the Ivory-billed Woodpecker compared to the PileatedWoodpecker (33). This obtuse angle is visible from a distance, is readily seen in our images (Figures 6, 7), and can be a useful identification clue in situations where lighting or distance makes it hard to observe plumage details with clarity (35). Combined with feet extended diagonally upward and to the side of the body, the stance of the birds appearing here are consistent with that of a Campephilus sp.

In other words, the ivorybills show what a feminist ornithologist might call “birdspreading”, with a wide stance, legs angled upward (not below the pelvis, as in the pileated), and feet forward. Two photos (A and D below) are from this study. No other woodpecker stands like this.

I encourage you to watch the two video clips (successions of trail-camera photos), which you’ll find here.

There are several other behavioral indices that these are ivorybills.  Comporting with historical observations, the birds seen recently fly high and far, having big home ranges. They are also fast. All three of these features differ from the pileated, whose flight is quoted as being “rather slow, but vigorous and direct.”

Finally, while pileateds forage alone, the authors of the present paper saw three of the putative ivorybills foraging just a few meters apart—perhaps a family group. This of course is one anecdote, but it adds to the evidence.

The authors conclude (and I agree, along with some birders), that they have indeed seen living individuals of Ivory-billed woodpeckers.

But some ornithologists aren’t convinced, and for good reason: the evidence, while pretty good, is not strong enough to be dispositive. When I asked my colleague Steve Pruett-Jones what it would take to convince ornithologists that the species isn’t extinct, he said this:

Well, I’m not really sure. It would vary with the person I guess. Clear, unmistakable photographs or a video would do it.
The paper in question has not yet been peer reviewed and so there may be additional criticisms that come to light.
The criticisms of the earlier reports (over the last 10 years) were generally along the lines of ‘without a clear photograph, you can’t completely rule out a pileated woodpecker’.
This criticism or skepticism is also rooted in the belief/assumption that there are so many birdwatchers now, and there are so few large intact flooded areas where the bird could survive, that if it was still alive, it would have been seen by more people.

Steve, who is fairly convinced by the evidence, also sent me a link to the only summary of this new paper I’ve seen, from revkinbulletin.  It does give criticisms, including some by ecologist Stuart Pimm. They don’t dismiss the evidence, but Pimm argues that the amount of habitat left for these birds is so small that some individuals must have crossed open areas and been seen by birders.

The conclusion is that old chestnut of scientific conclusions: “More work needs to be done.” But one thing is for sure: this new work (which is ongoing) will make birders think twice about declaring the ivorybill extinct, and will spur new efforts to find it. Of course without a concerted effort to save or increase the habitat (wet bottomland forest), seeing the bird is not the same thing as saving it.

28 thoughts on “Is the Ivory-billed Woodpecker still with us?”