Anglican priest Tish Harrison Warren continues to proselytize for Jesus in the op-ed section of the New York Times, but this time she does it by proxy—by interviewing one of her friends who was diagnosed with terminal prostate cancer. Click on the screenshot to read: 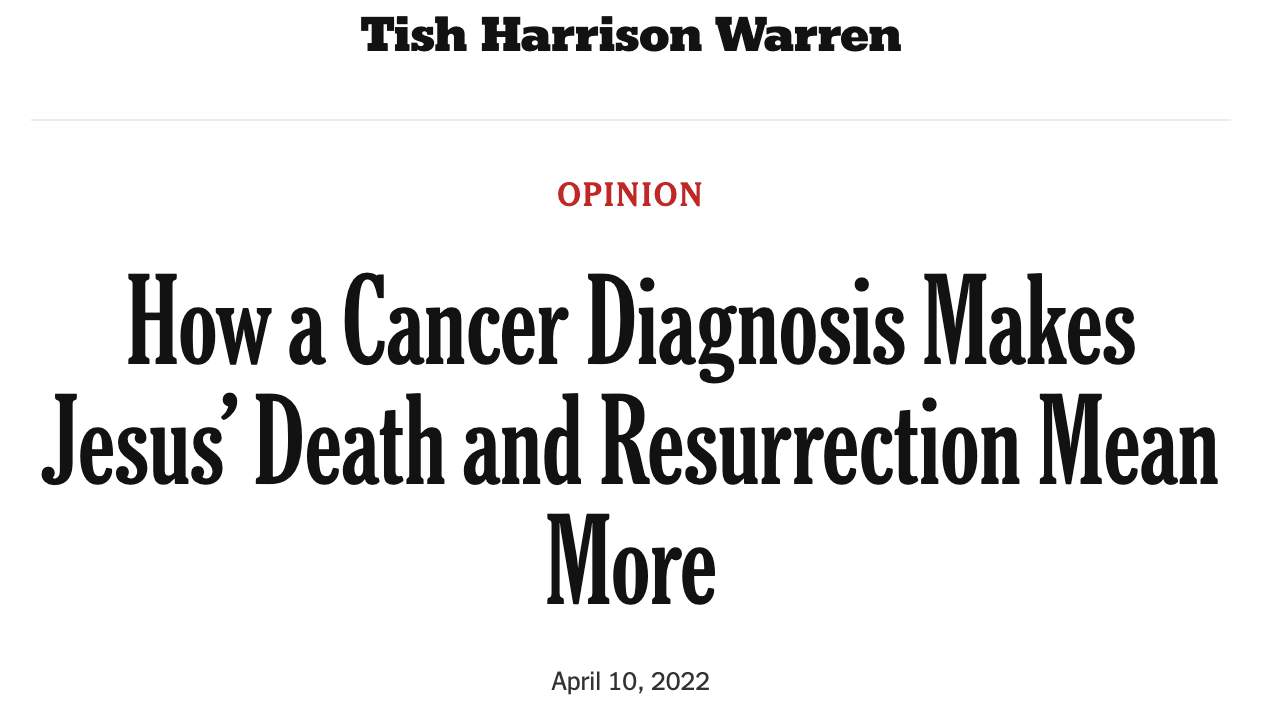 Now I don’t want to be too hard on her friend Timothy Keller, who founded an evangelical Christian church in New York City. After all, the guy is dying.  And he’s finding his final comfort in Jesus and, especially, in the resurrection, as many Christians do.  I for one wouldn’t want to be comforted by superstitions at the end, but hey, he’ll never find out he was wrong.

No, what bothers me more than Keller’s clinging to the myths of Christianity is his claim below that all things will be put right on Earth, but only if the resurrection happened. If that’s not true, then things will go on sucking. (Note, however, that there is absolutely no tangible evidence for the resurrection.)

At first I thought that Keller meant that all things will be set right after you die if the Jesus story be true. Or that somehow we would all come into God’s Kingdom on Earth (not in heaven) when the trumps sound and Jesus comes back at the Rapture.  But I read the passage below twice, and it doesn’t seem to say that. I interpret to me this: IF THE RESURRECTION HAPPENED, then some day (day not specified), God “is going to put everything right.” That is, we’ll keep living our lives on Earth, but all evils will vanish.

You read this and tell me if Keller doesn’t mean that. (Warren’s question is in bold, Keller’s response in plain type. My own emphasis is in italics.

In your latest book, you wrote that our culture is experiencing a “crisis of hope.” Where do you find hope? What hope do you offer to others?

In J.R.R. Tolkien’s essay “On Fairy-Stories,” he says there are indelible human longings that only fantasy, fairy tales or sci-fi can really speak to. He says that all human beings have a fascination with the idea of escaping time, escaping death, holding communion with other living things, being able to live long enough to achieve your artistic and creative dreams, being able to find a love that perfectly heals. Tolkien says: why do we have those longings? And as a Christian, he thinks the reason is that we were not originally created by God to die.

We all deep down kind of know that this is the way life ought to be, and if the resurrection of Jesus Christ happens, then all those things are literally going to come true for us.

That’s the reason you have this paradox. On the one hand, the resurrection is a kind of very concrete thing to talk about, like “What is the evidence for this historical event?” Probably the single best book on this subject in the last 100 years is N.T. Wright’s book “The Resurrection of the Son of God.” [JAC: There’s new evidence?]

Yet if we come to the place where we accept it, then suddenly there’s no limit to what kinds of things we can look forward to. I know some of your readers are thinking, “I can’t believe there’s a person with more than a third-grade education that actually believes that.” But I do. And these last few months, as we’ve gotten in touch with these great parts of our faith, Kathy and I would both say we’ve never been happier in our lives, even though I’m living under the shadow of cancer.

Now I’m not sure exactly what Biblical exegesis tells us that Earthly evil will vanish if the resurrection occurred. Yes, the resurrection supposedly affords us a chance to find bliss in eternity (in Heaven, remember), but that doesn’t even hold for all Christians. Whether you believe in salvation through faith or salvation through works, the sheep will still go up and the goats will be fried.

As for “knowing the way life ought to be” in our hearts, well, the way we “know” how life should be will vary among people. And anyway, who says that the way life “ought to be” is the way God will make it? After all, aren’t God’s plans a mystery? Further, what the resurrection has to do with all this is unclear, save that it’s an example of eternal life for one person and a purported miracle.

Keller goes on to say that his belief gives extra power to the holiday of Easter.  As I said, if this makes Keller feel better, more power to him, but the theology behind his reasoning eludes me. Surely there are some ex-Christians among the readers who can explain.

More curious is why The New York Times continues to publish this kind of stuff. If we use the Chicago Maroon editors’ view that op-eds with factual inaccuracies can’t be published, this one should have immediately been spiked. The NYT has no astrology column, and it has no comics. Why does it have this kind of theobabble?

61 thoughts on “Jesus will fix everything—if the resurrection happened!”