On Monday we revisited what I think is the most beautiful place I’ve seen in Antarctica. Unfortunately, the first trip through, on March 9, was made in near darkness, so it wasn’t great for photography. But two days ago it was, and so I’ll show some photos. It’s a magical place, a narrow, 11-km strait, filled with icebergs, that can’t help but give you that secular “spiritual” feeling.  Here’s my intro from Mach 10:

After dinner last night we haded through the Lemaire Channel, one of the most beautiful places I’ve seen in this region. From Wikipedia:

Lemaire Channel is a strait off Antarctica, between Kyiv Peninsula in the mainland’s Graham Land and Booth Island. Nicknamed “Kodak Gap” by some, it is one of the top tourist destinations in Antarctica; steep cliffs hem in the iceberg-filled passage, which is 11 km long and just 1,600 metres wide at its narrowest point.

. . . The channel has since become a standard part of the itinerary for cruising in Antarctica; not only is it scenic, but the protected waters are usually as still as a lake, a rare occurrence in the storm-wracked southern seas, and the north-south traverse delivers vessels close to Petermann Island for landings. The principal difficulty is that icebergs may fill the channel, especially in early season, obliging a ship to backtrack and go around the outside of Booth Island to reach Petermann.

The map I showed before: 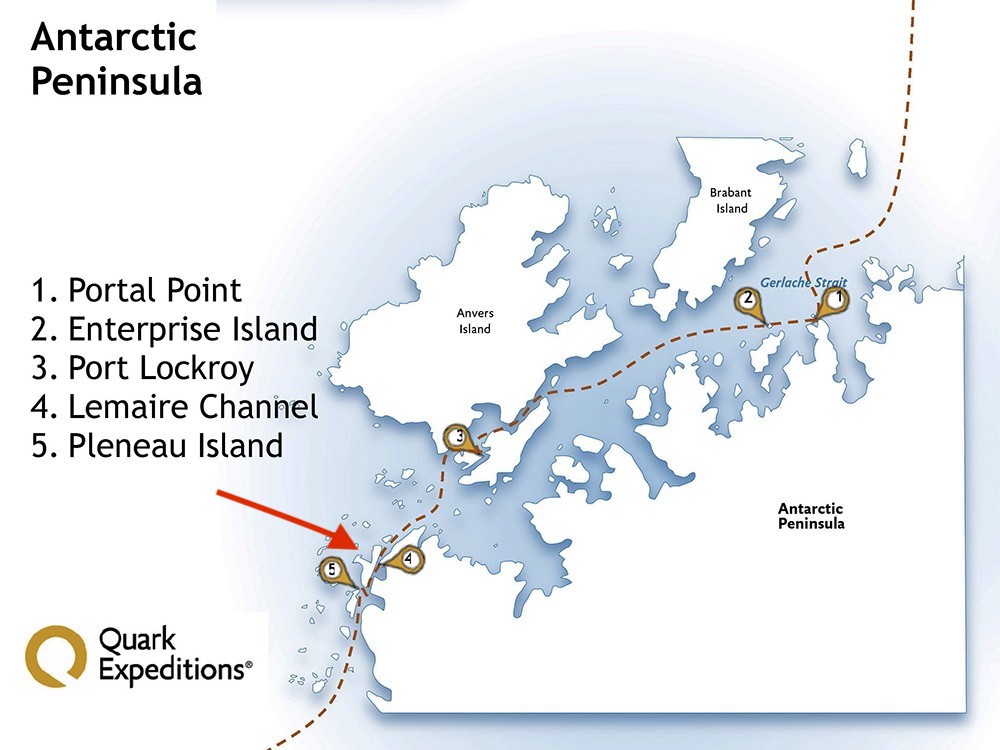 We did a transit on November 19, 2019 during my last trip here; the sun was shining and it was enchanting. You can see a few pictures from that bit here.

There’s nowhere to land here, so your Lamaire experience consists of the crossing, hopefully during the day, and running back and forth on the top deck to get the views on either side.

Since we made no landings yesterday, but cruised south to desinations on the Peninsula these first photos were taken in the late morning and early afternoon. The Peninsula was to our left, so I spent a lot of time on the top deck, which was windy and cold. As you can’t use my point-and-shoot camera with gloves, my hands got frozen, and I periodically repaired to the lounge (the “bar” for those who order drinks) to warm up. But I couldn’t stay away from the scenery for long. The combination of snow colored mountains and the limited palette of colors draws me back. The mountains I’m used to and love, like the Himalaya, have snow on the tops, but in Antarctica the mountains are snow all the way down.

And when they peek through the clouds, or catch a fleeting bit of sun, as in the photo below, it’s magical. It’s one of those experiences, like Sagan’s “pale blue dot”, that makes you feel small. 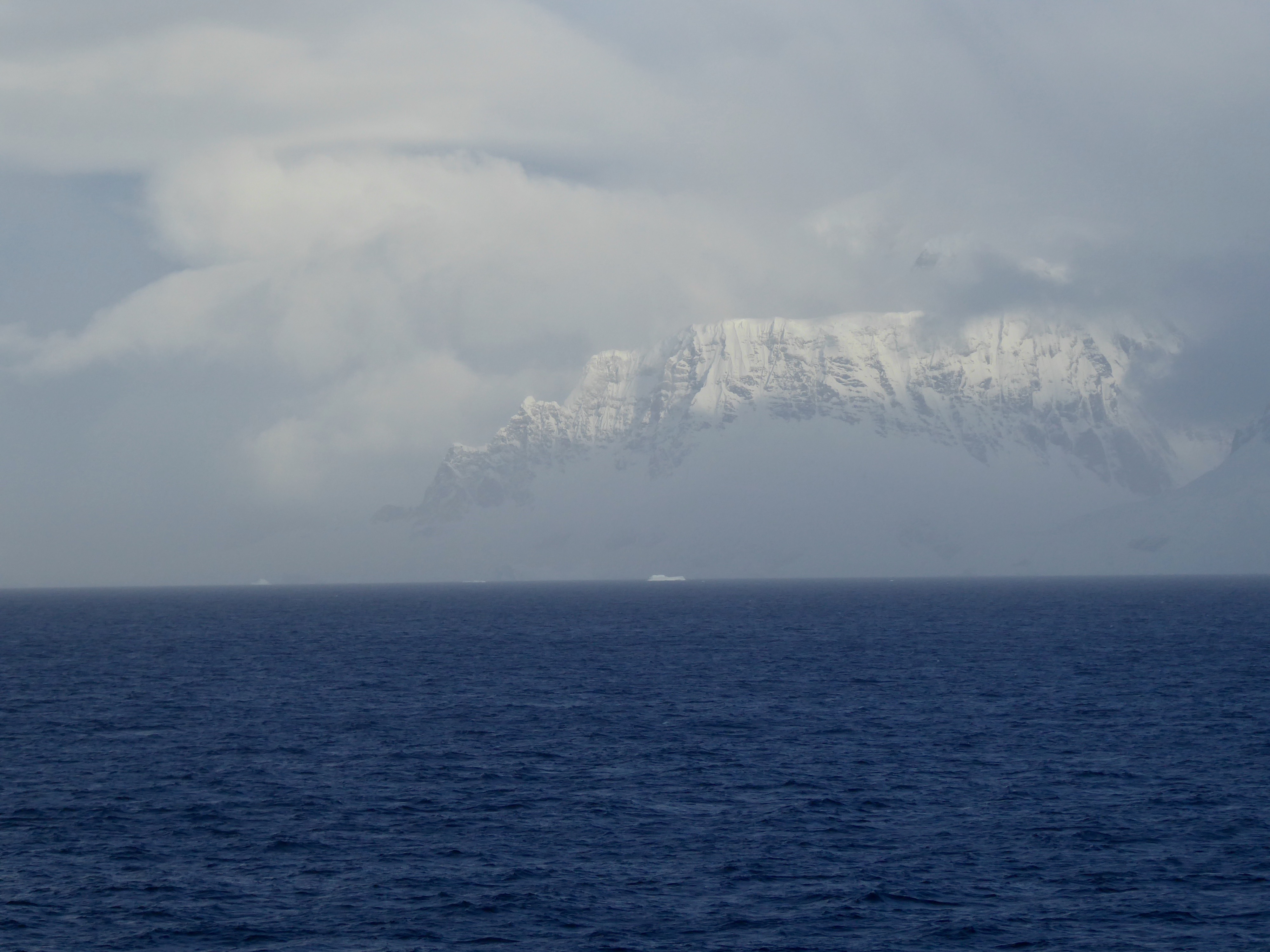 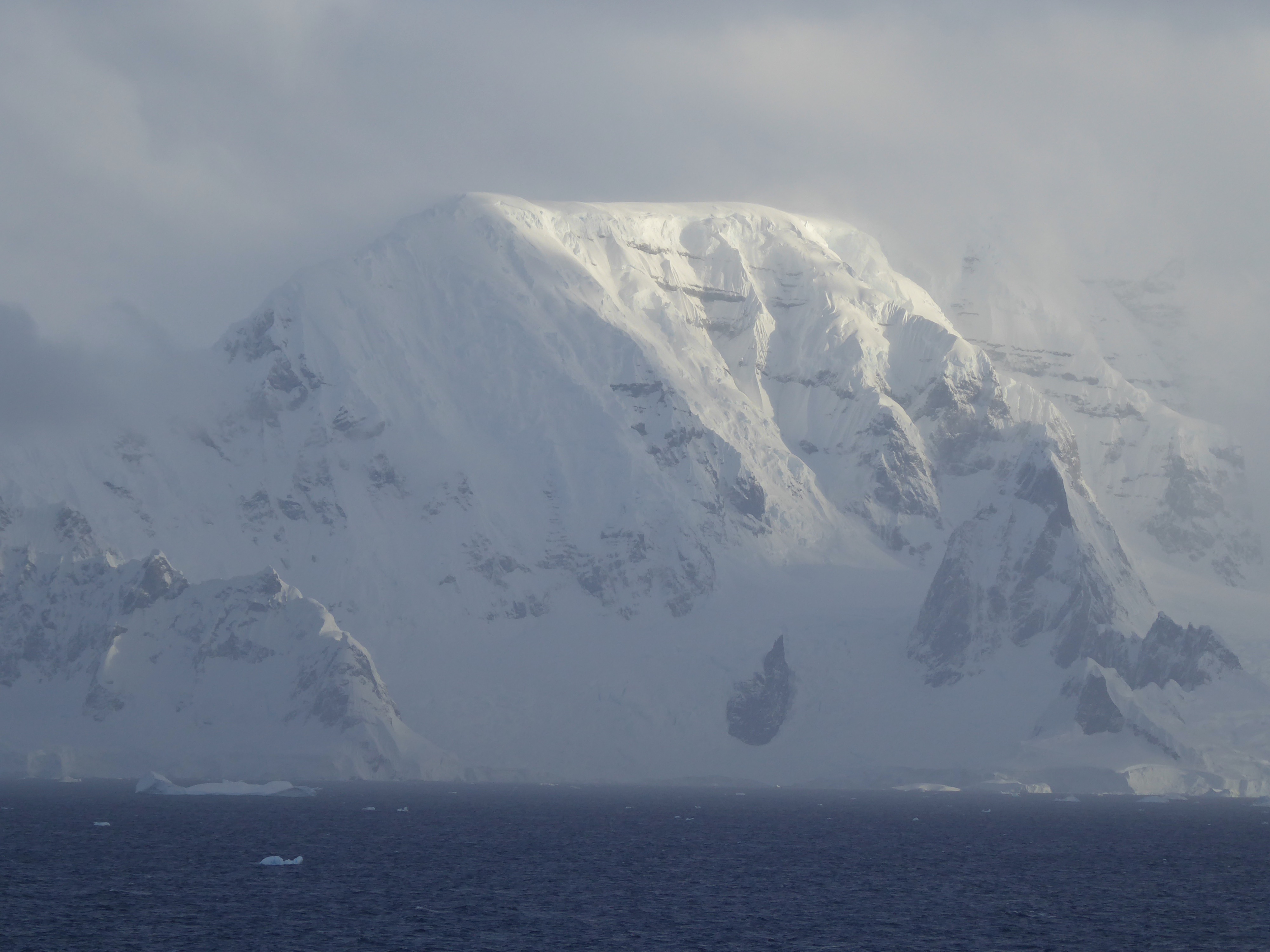 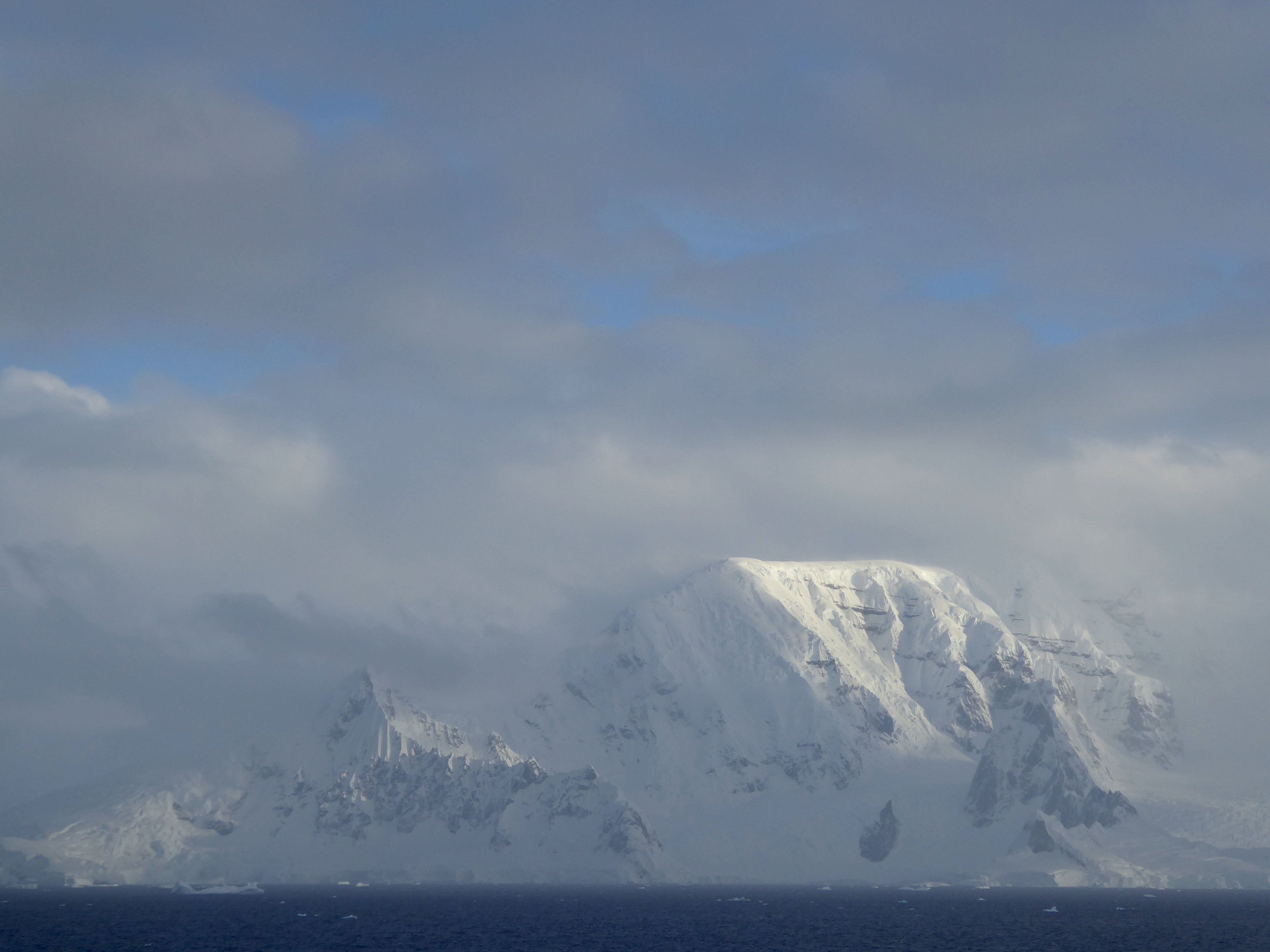 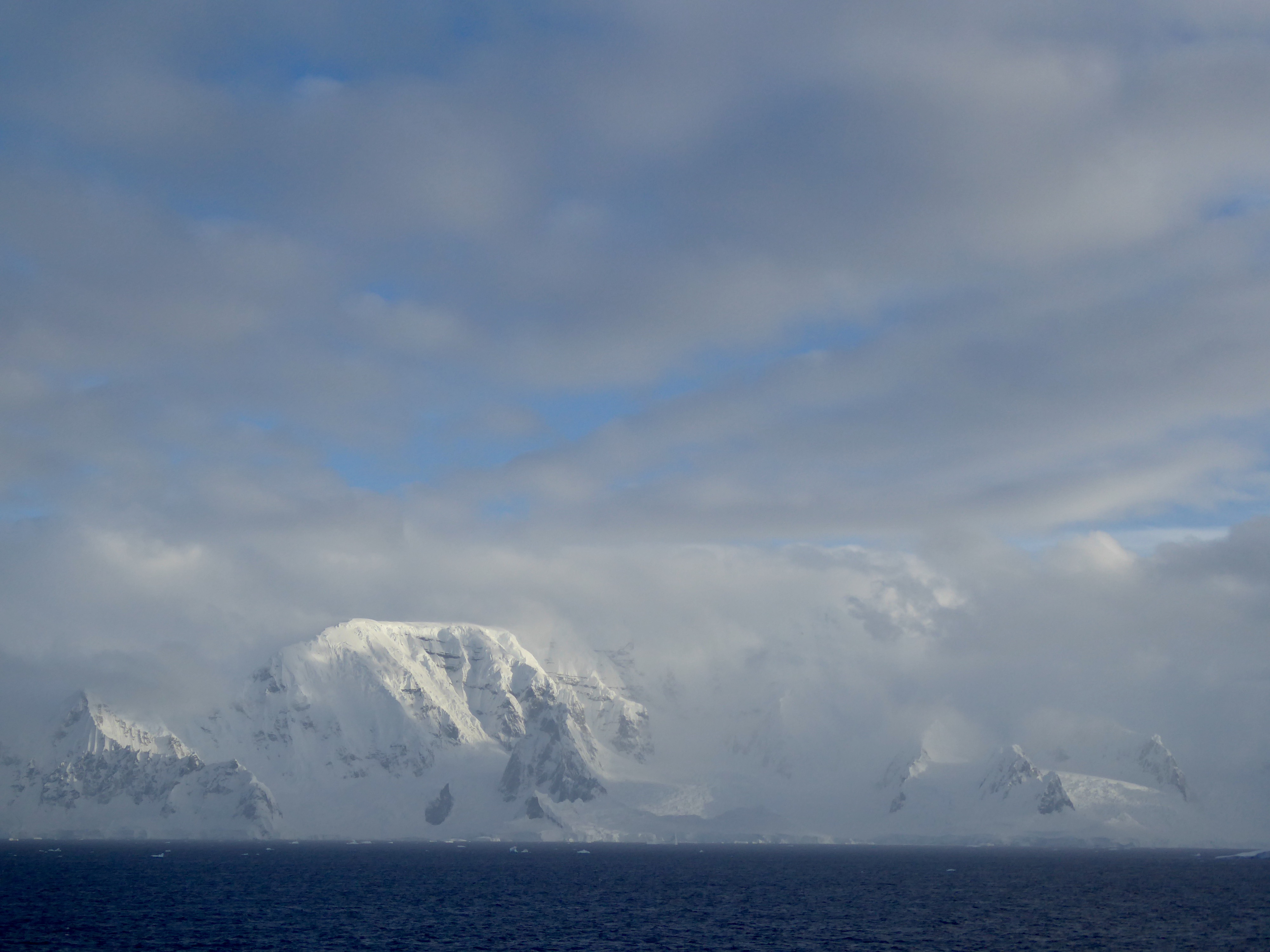 Sun was a rare commodity yesterday, but the parts of Antarctica I’ve seen are gorgeous regardless of the lighting. All you want to avoid is rain, which obscures the photo and ruins your camera. 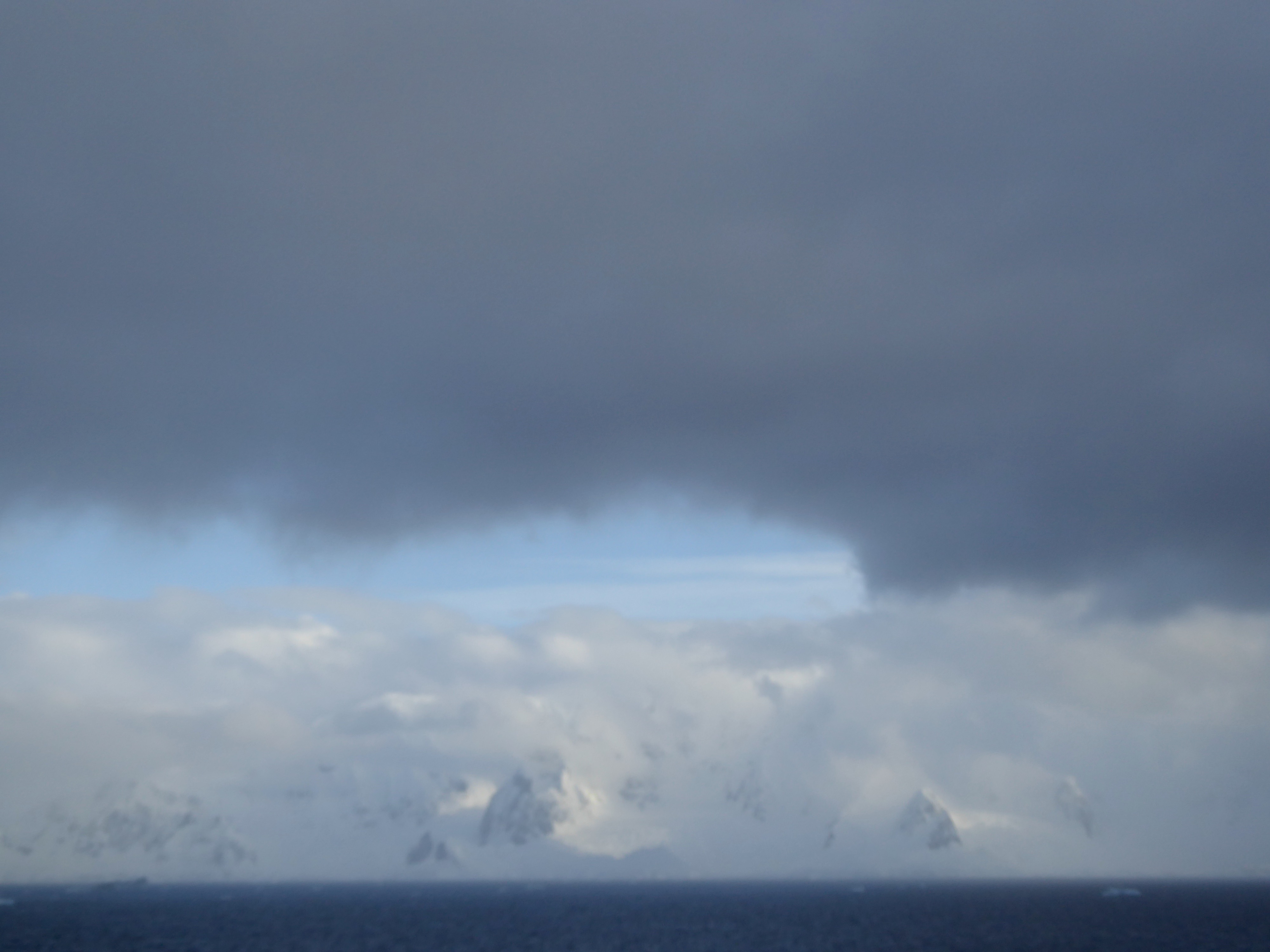 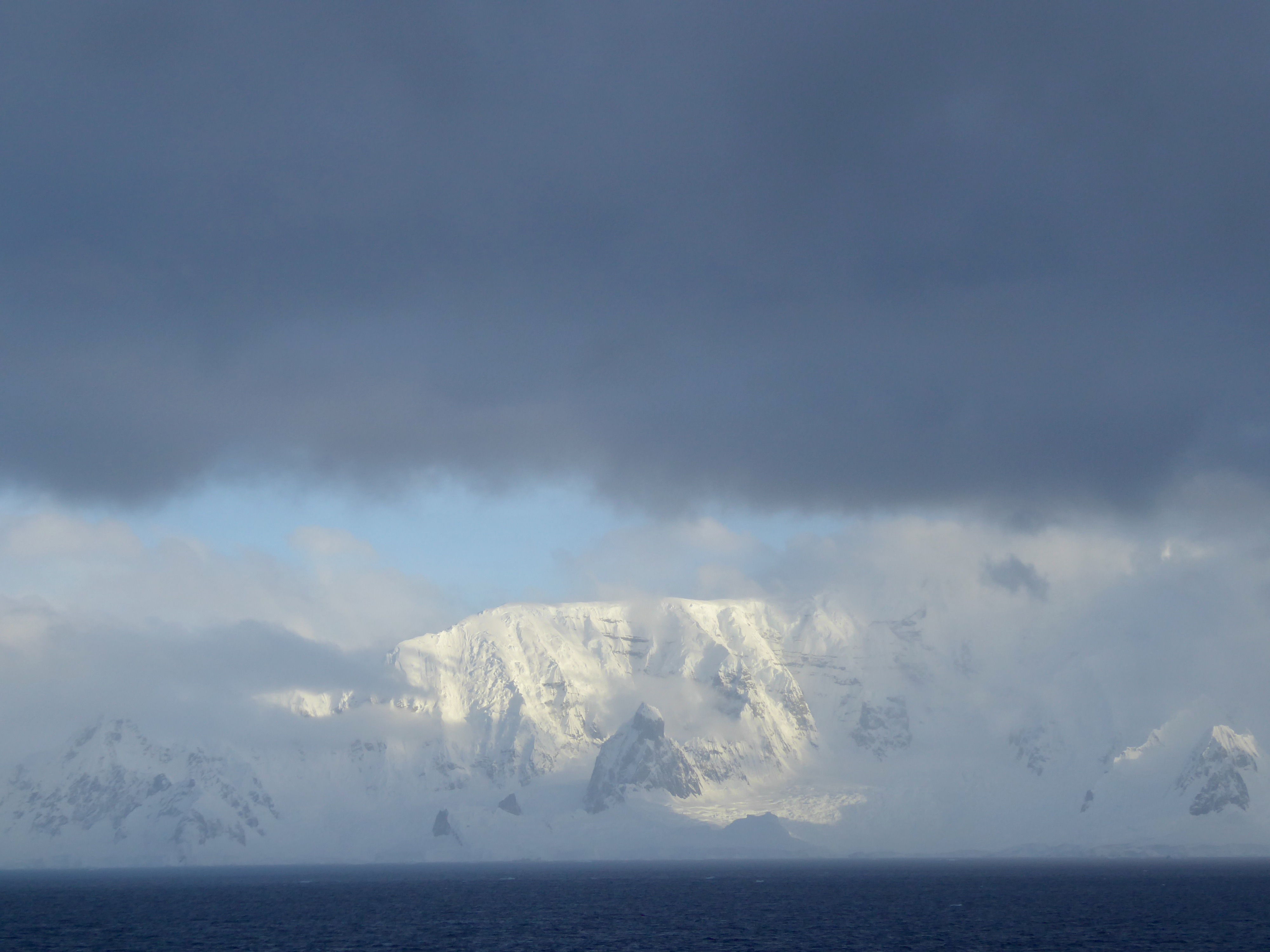 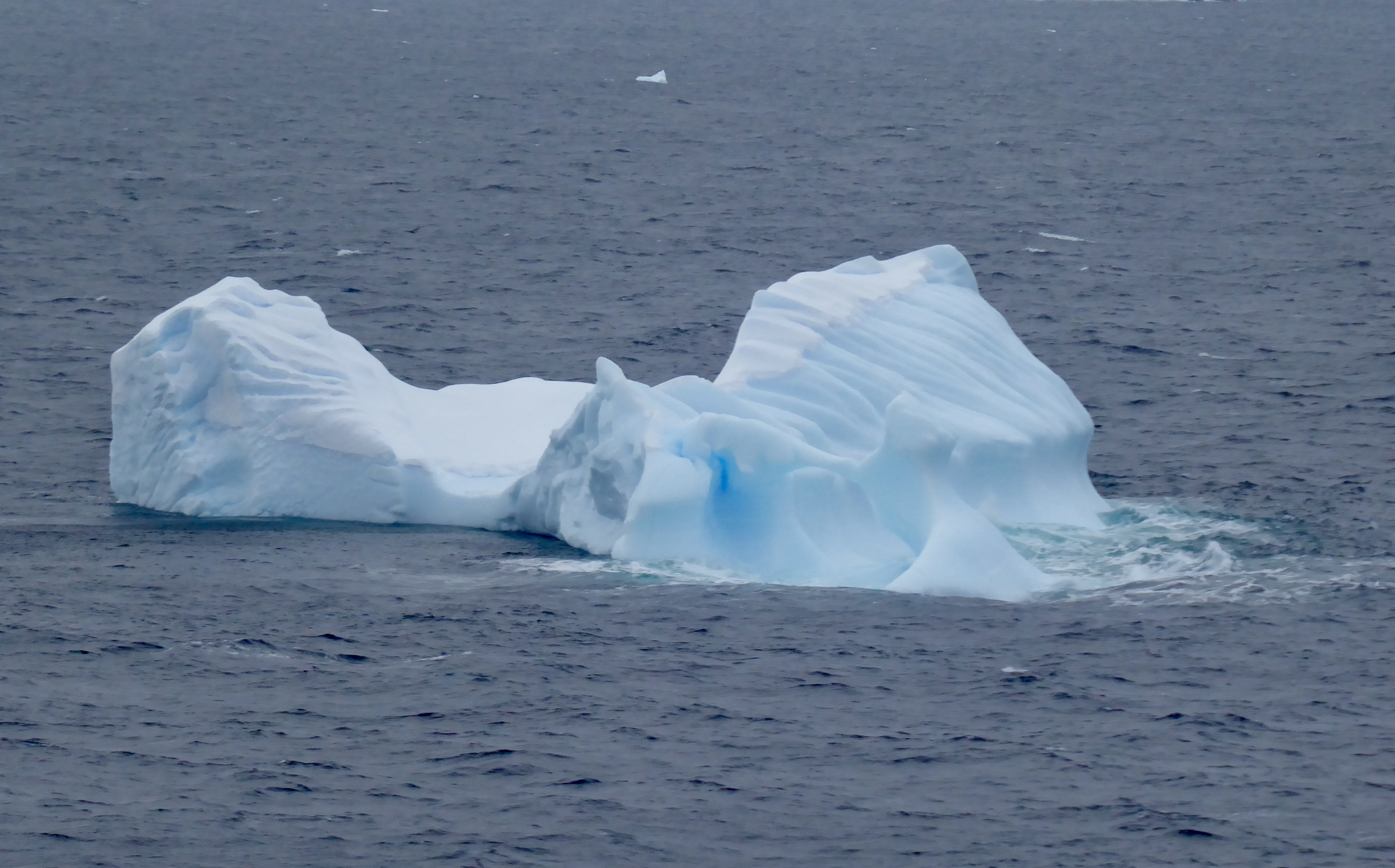 This mountain reminded me of a frosted cake: 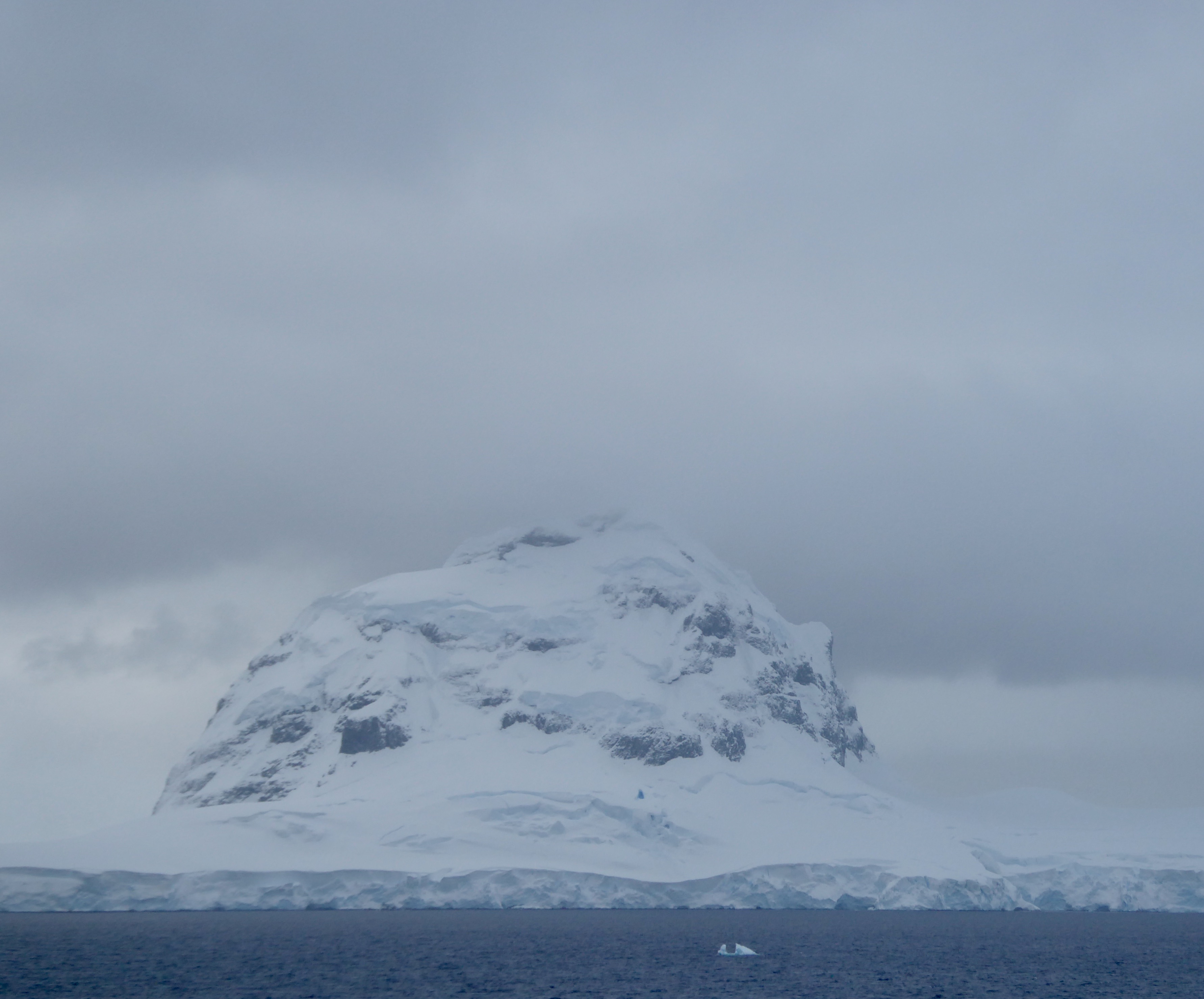 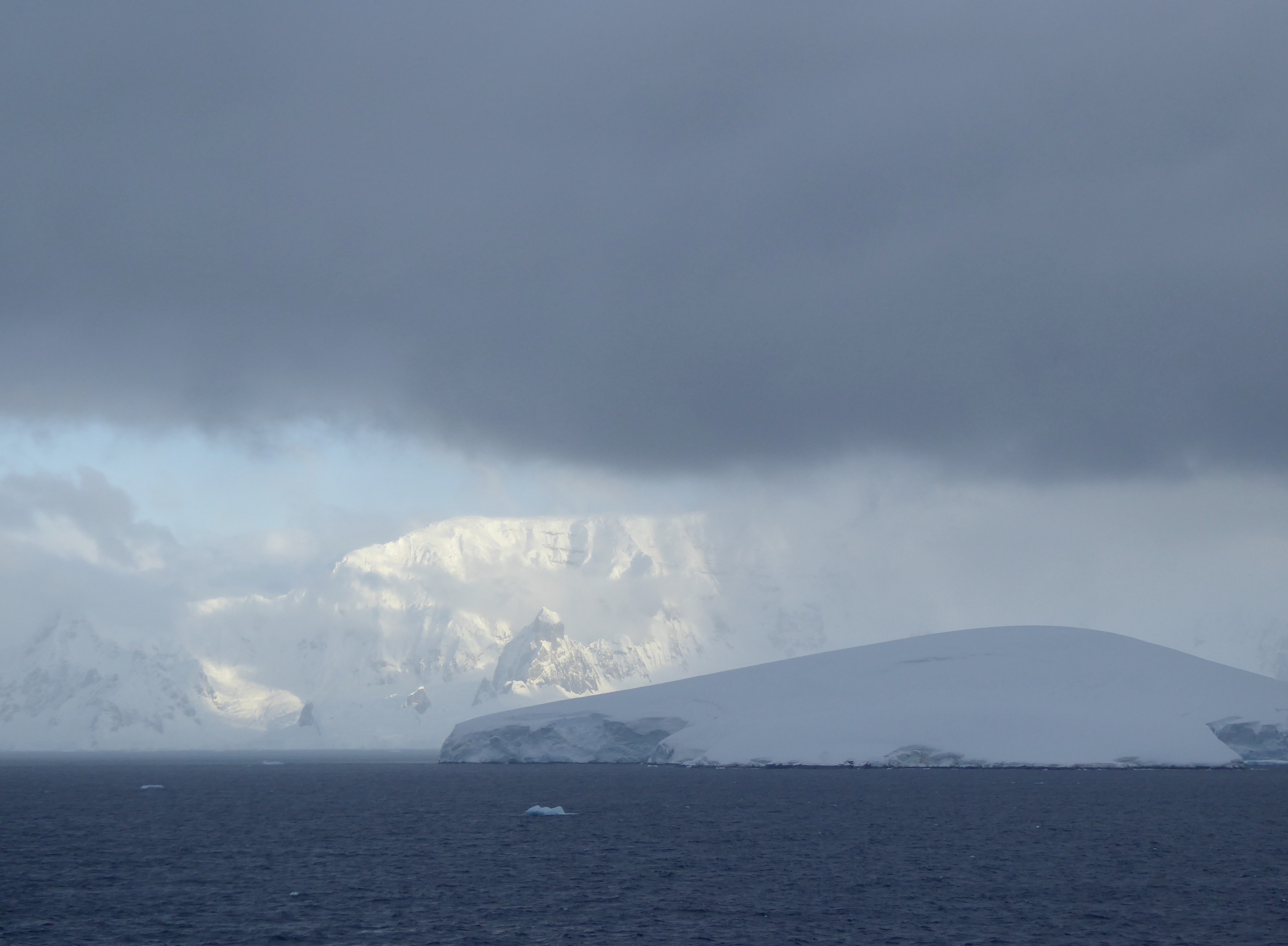 And into the Lamaire Channel. You can see how close the ship comes to the adjacent cliffs: 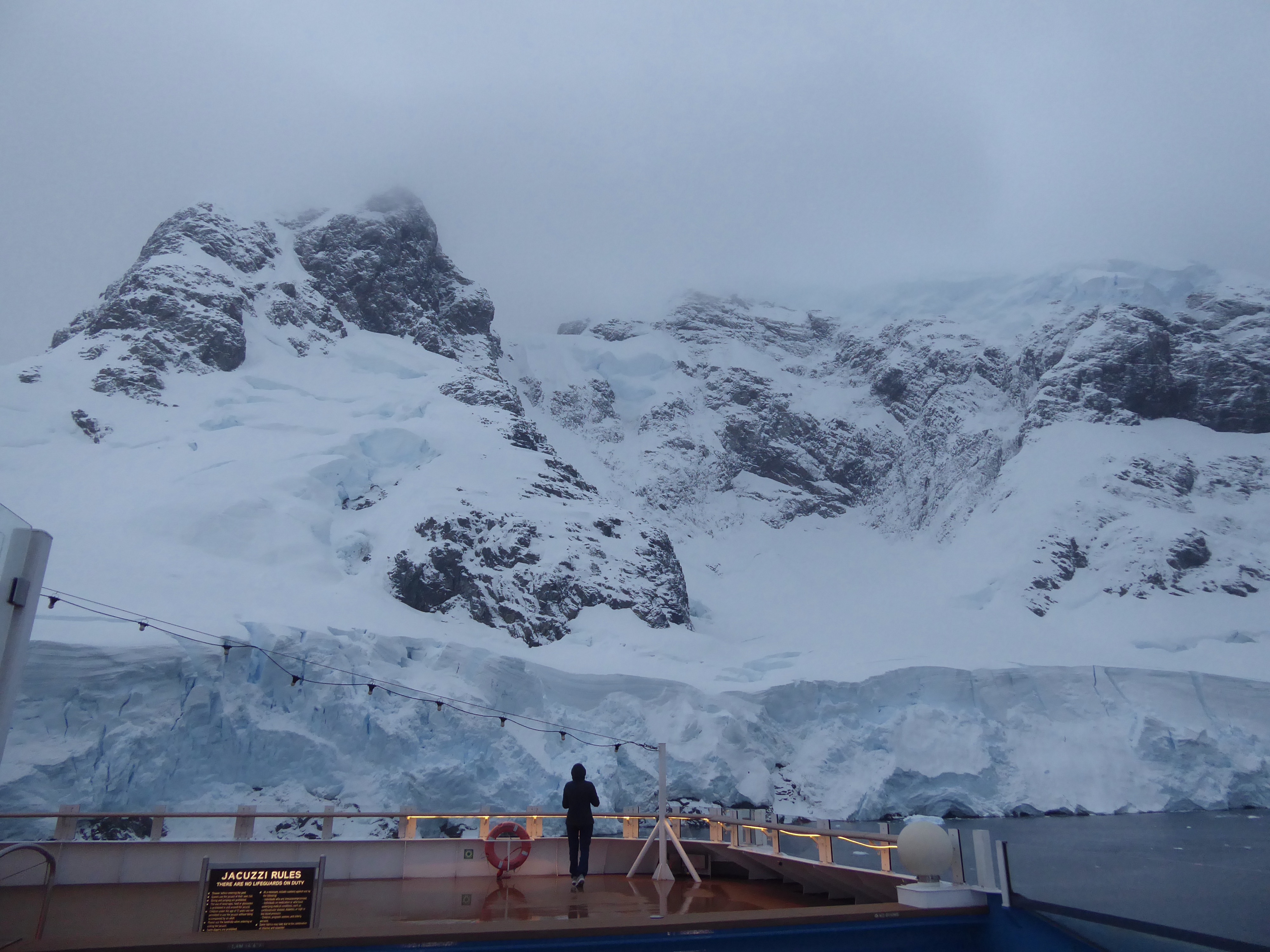 Often the Channel is full of icebergs or floating ice. When we went through it in 2019, it was completely covered with a thin sheet of ice, but the Amundsen is built for that, and we plowed our way through. 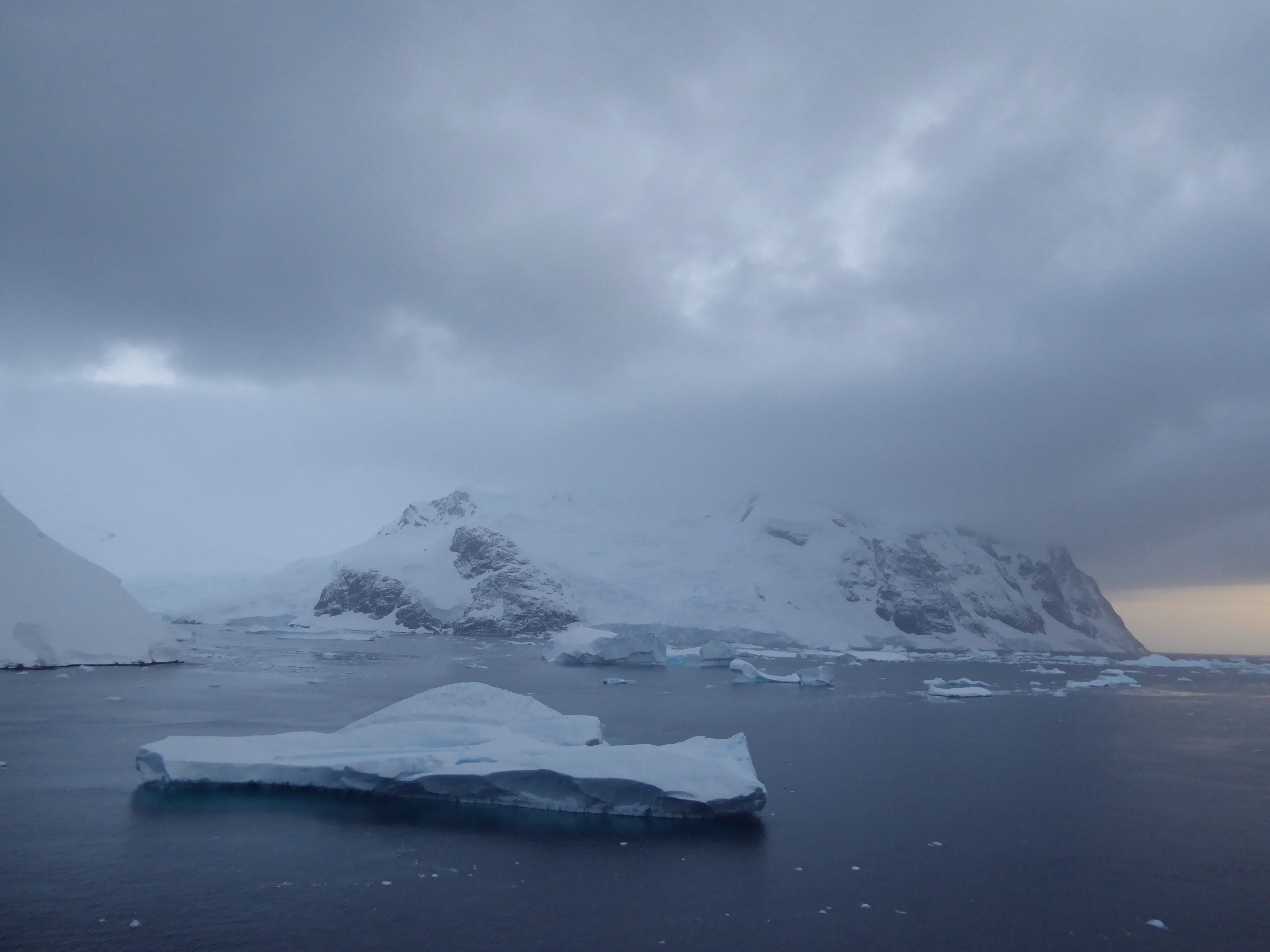 The sun set after our transit, and that made it especially gorgeous. Perhaps you can enlarge the photos by clicking on them; I’d like people to understand why I want to keep coming back here. 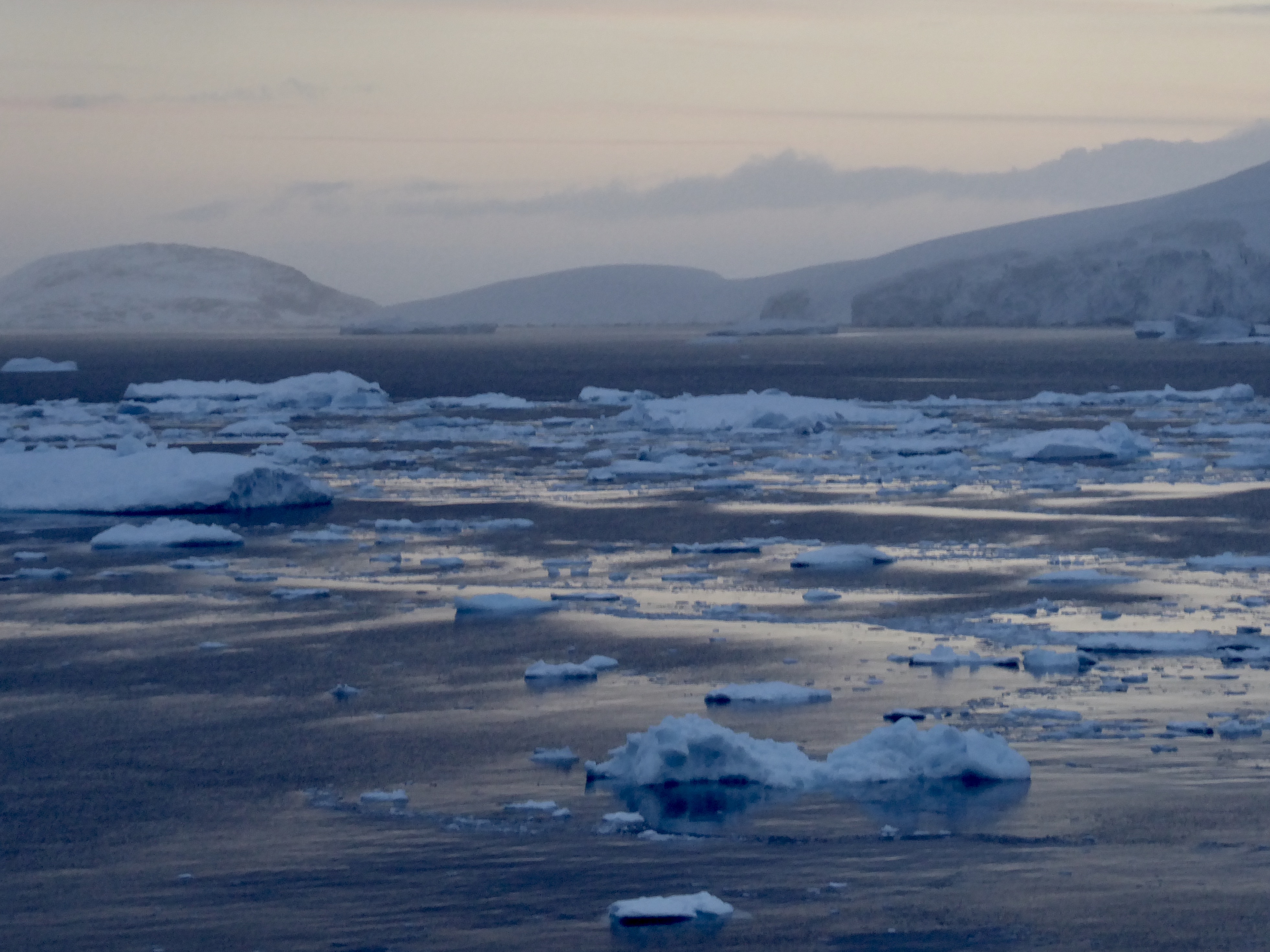 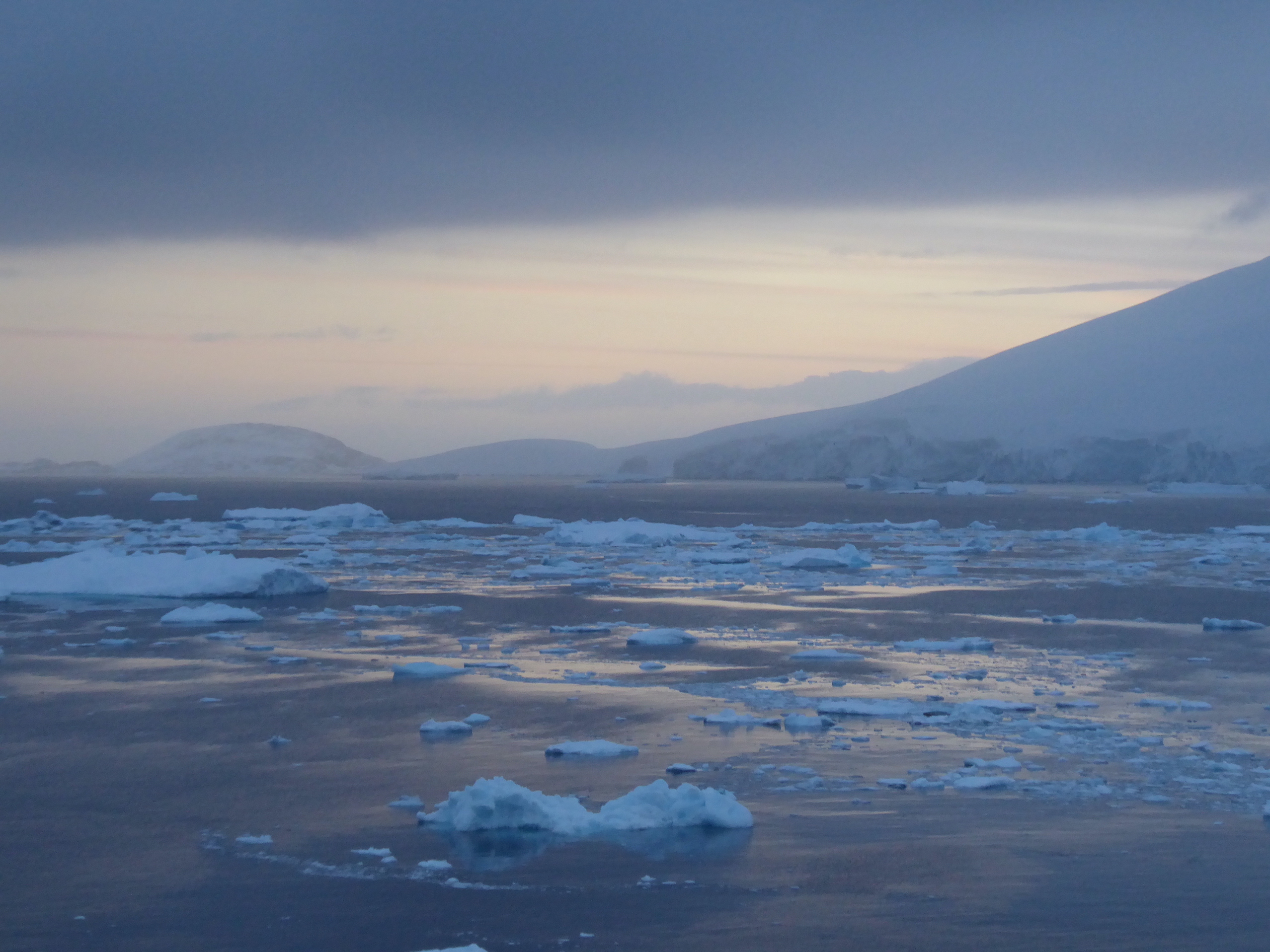 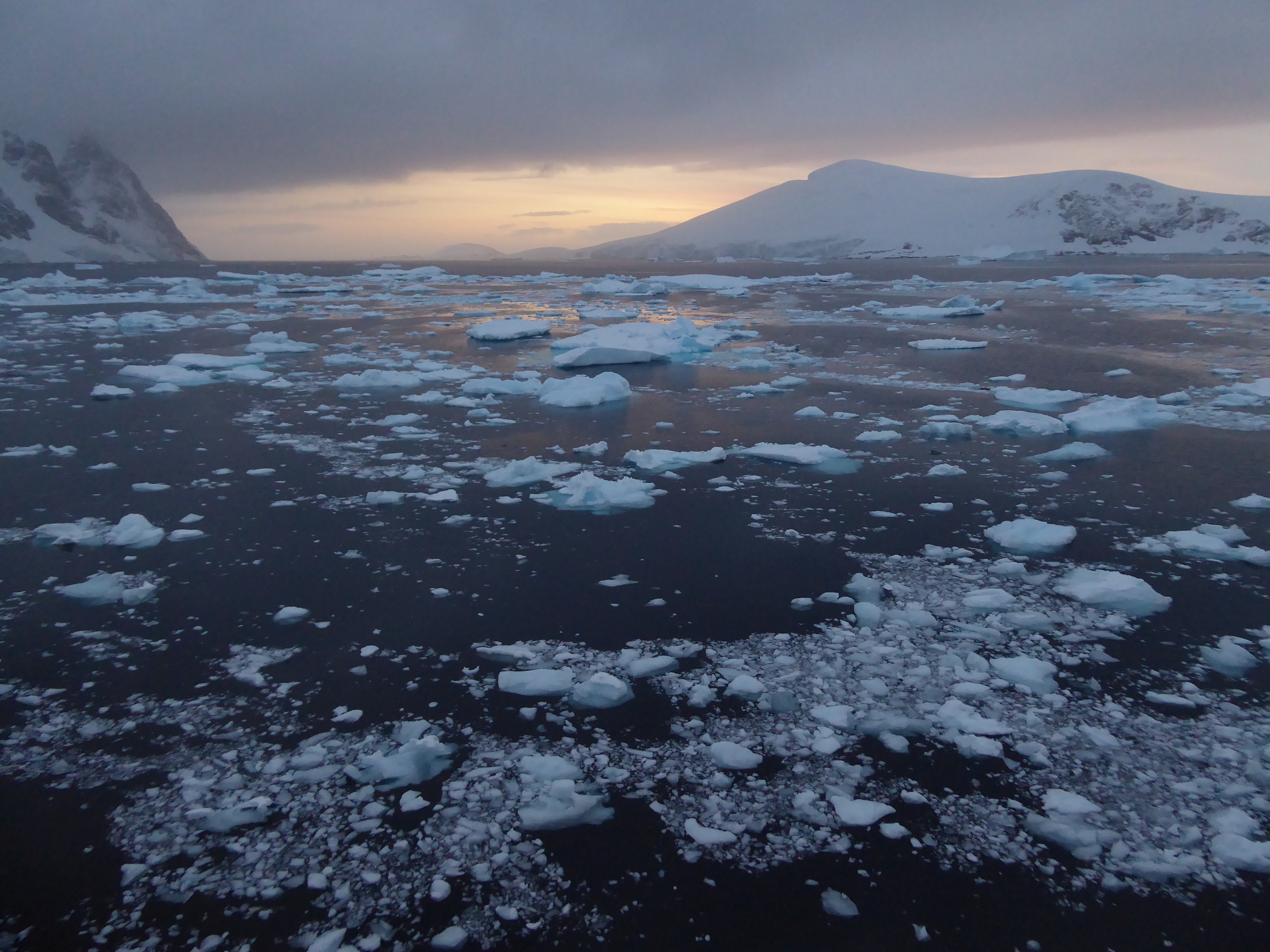 I’ve reversed time a little, as some of our transit of the channel began during dinner, and I took a few photos with my iPhone pressed to glass of the dining room. But I gulped dinner quickly so I can get on deck and see the sights in open air.

I’ve decided to forego beer for a while in favor of the ship’s wines. I haven’t yet sampled the ship’s house red, a Chilean cabernet sauvignon (all you want to drink is free), but I do like their sauvignon blanc, and can drink several glasses with dinner. The best part is the scenery in the background: what restaurant can provide views like these? 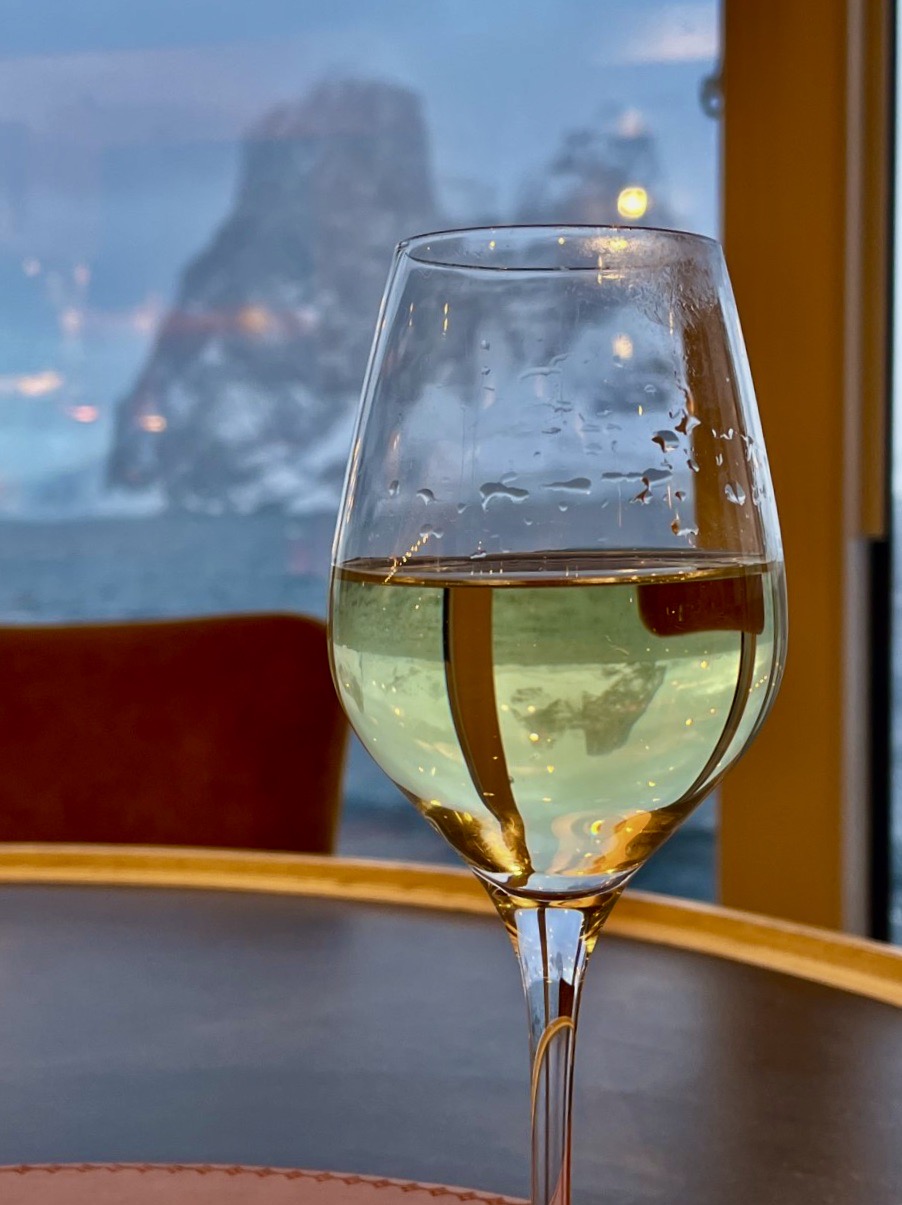 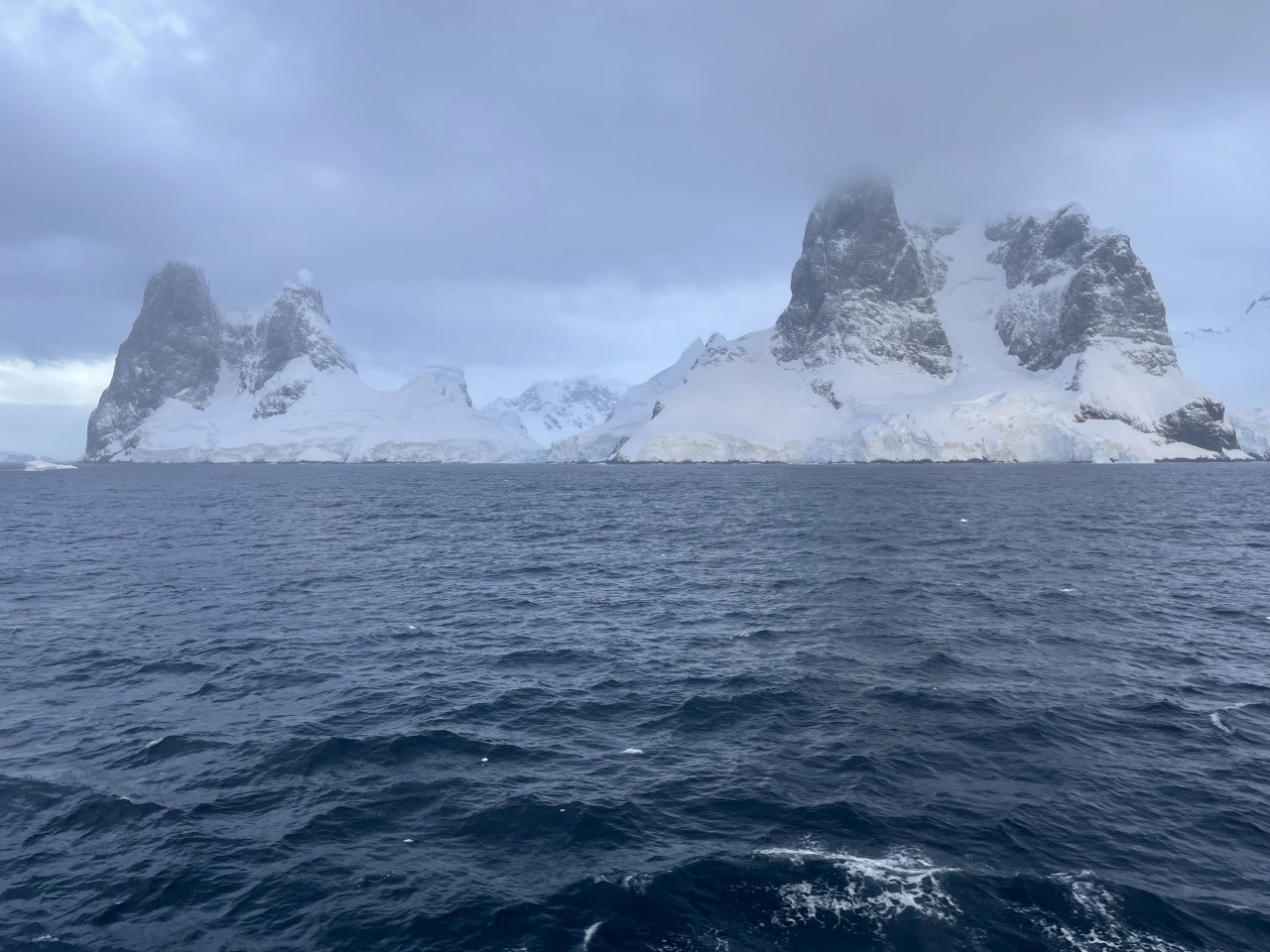 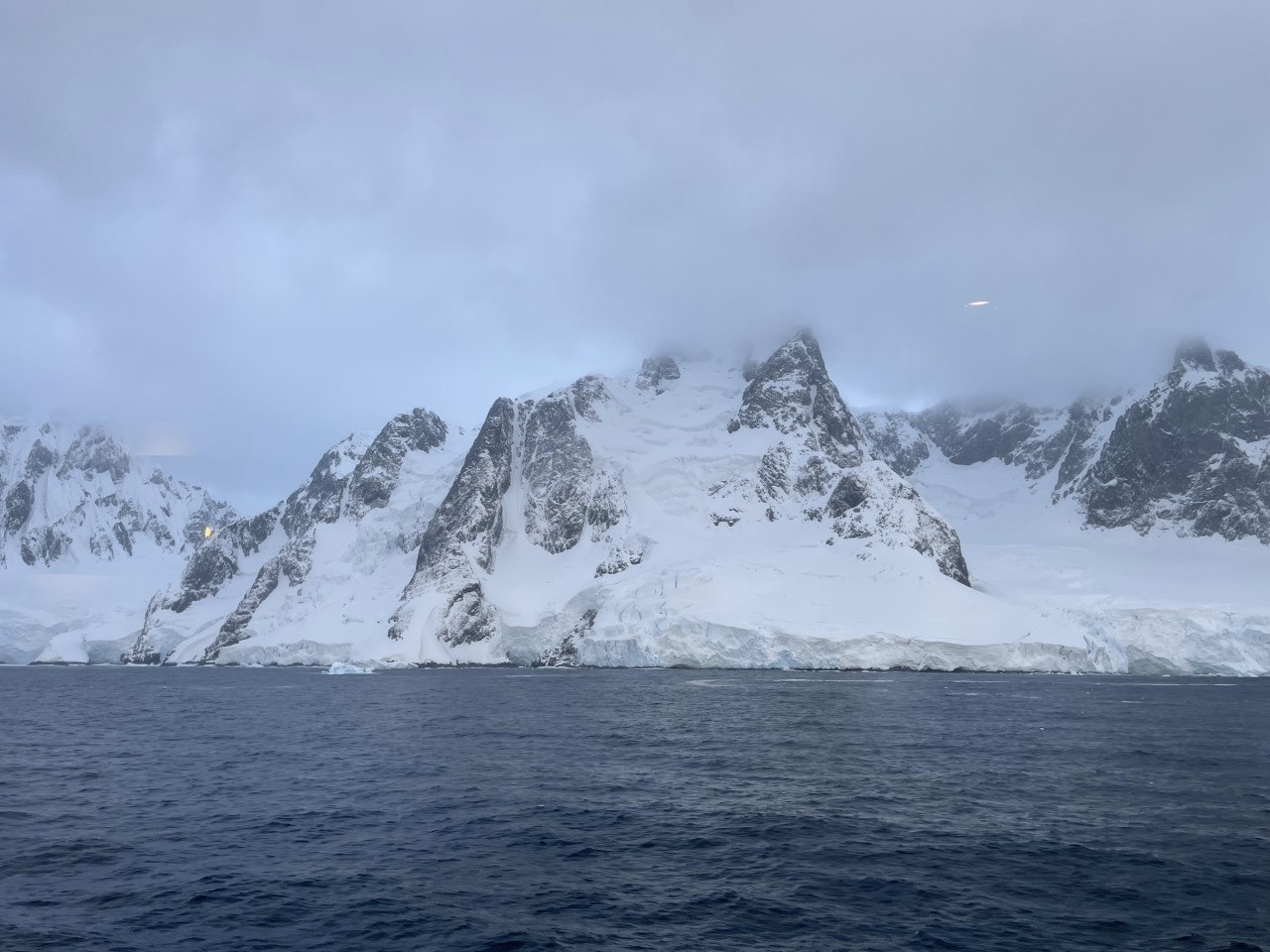 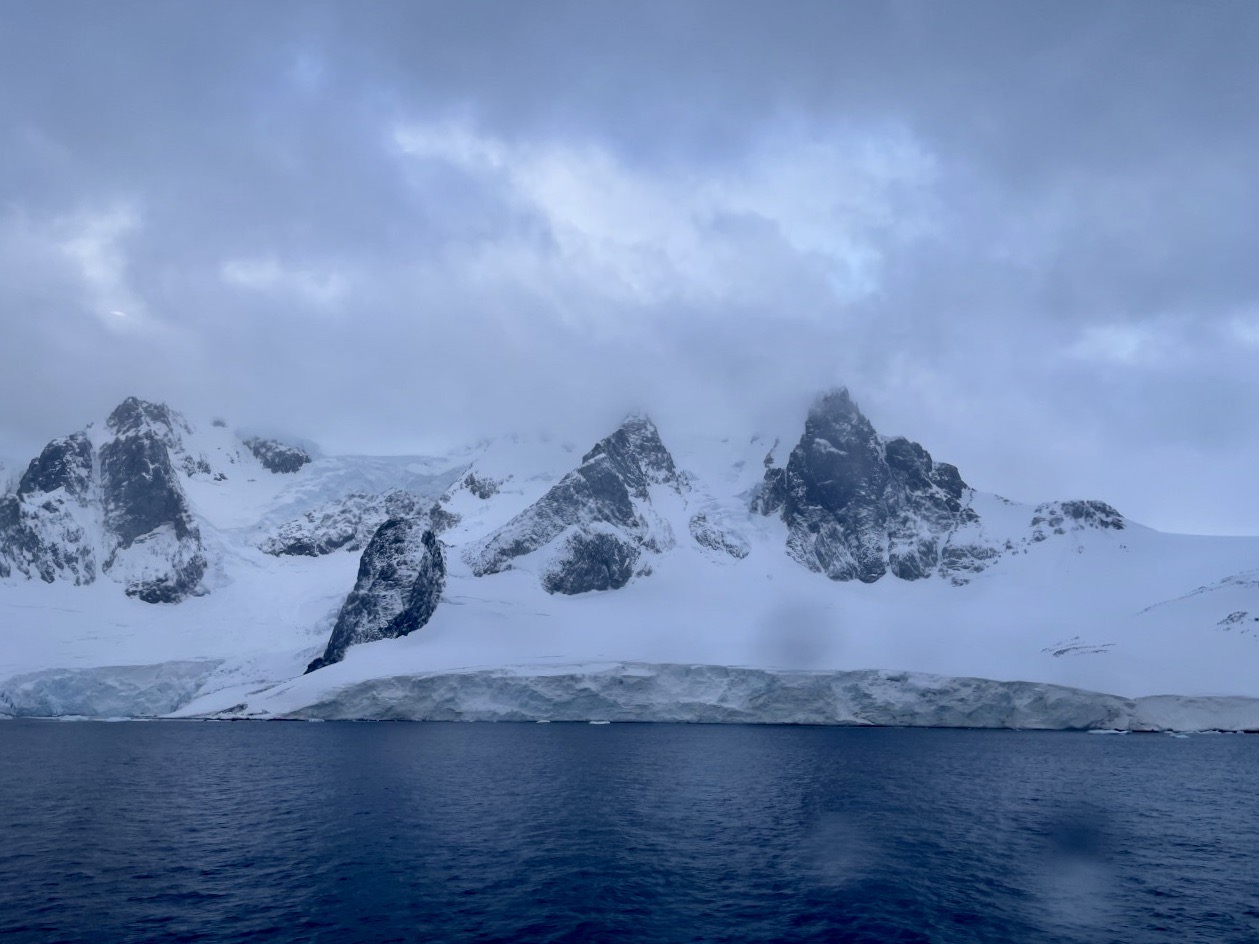 I was too transfixed by the view to photograph my food, but I had a few glasses of the sauvignon blanc, steamed dumplings, and a lamb hot dog (below) with fries. I was too eager to get out on deck to have dessert. 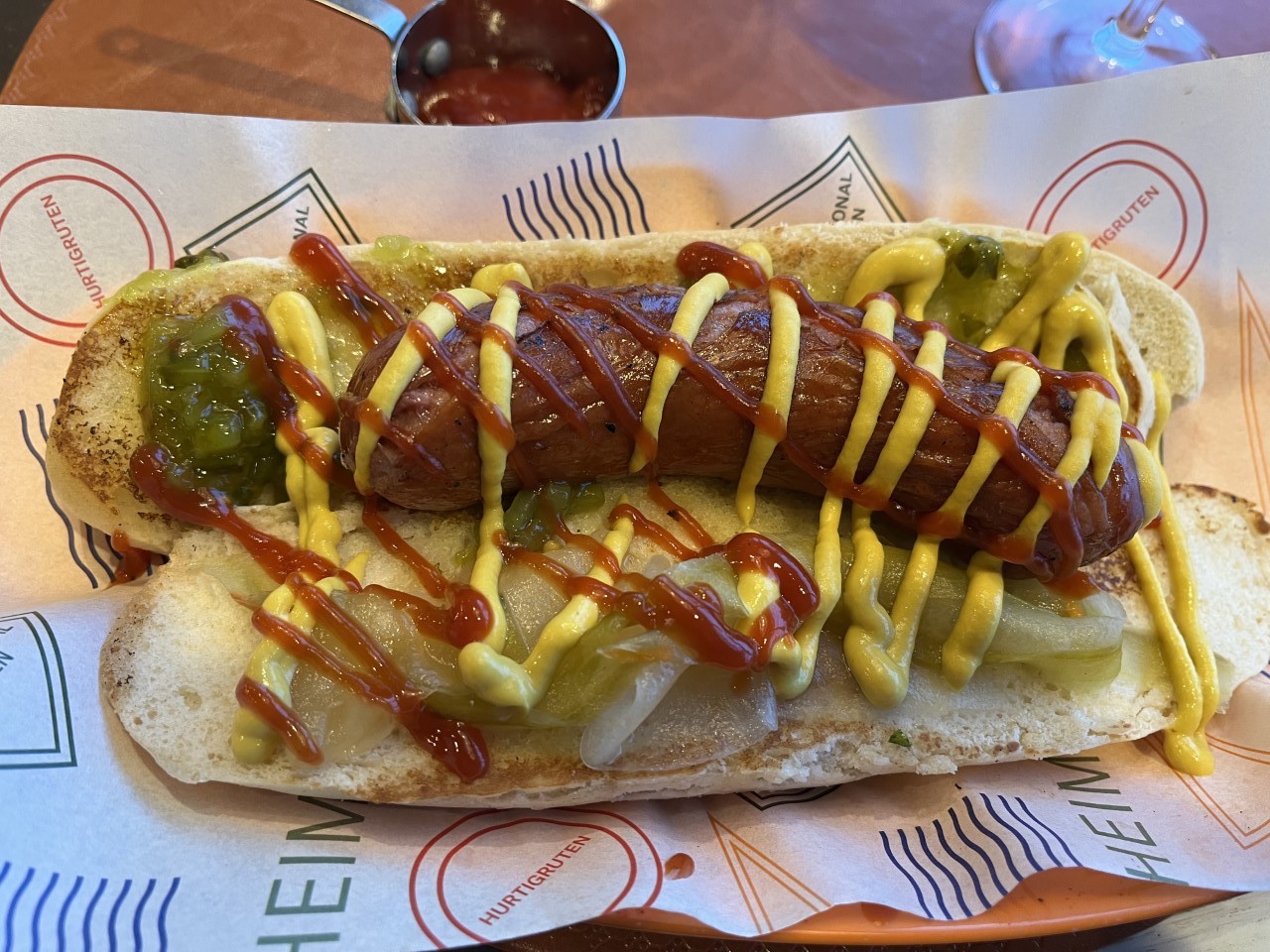 9 thoughts on “Antarctica, day 19: Around and through the Lemaire Channel”