Yesterday was indolent, with no landings. After crossing the Drake Passage in fierce weather (the Captain announced this morning that the swells were 6-10 meters, or 20-32 feet!), we spent much of the night huddled in place behind an island. (We’re of course several days ahead of schedule, so there was no need to book it back to Punta Arenas.)

Then we proceeded through the Beagle Channel, but very slowly so we didn’t see the famous glaciers, and stopped so we’d be outside the Garibaldi Channel at dawn. Here’s our route yesterday, with the red arrow where we overnighted.

There really aren’t many photos to show you; there will be more tomorrow from the fjord. This is the back of the ship steaming east in the Beagle Channel (named, of course, from Darwin’s voyage, but known to sailors before that). When I send these pictures to people, they always comment how blue the water is. Here it has some green in it, too. 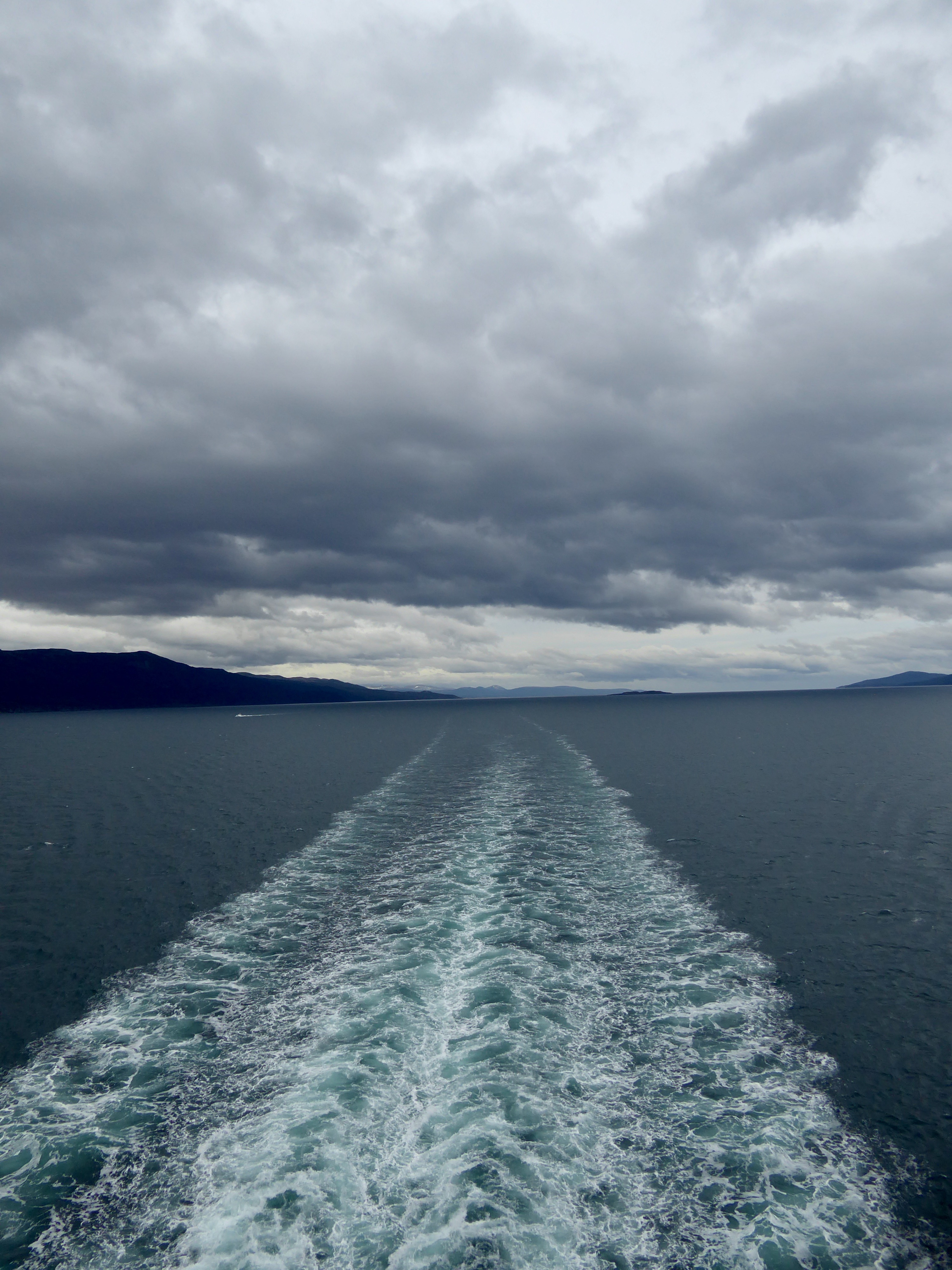 Our free Drink O’ the Day in the Bar, which is located on deck 10 and thus has a great view. It’s nice to sip your libation (socially distanced, of course) while having views like this one: 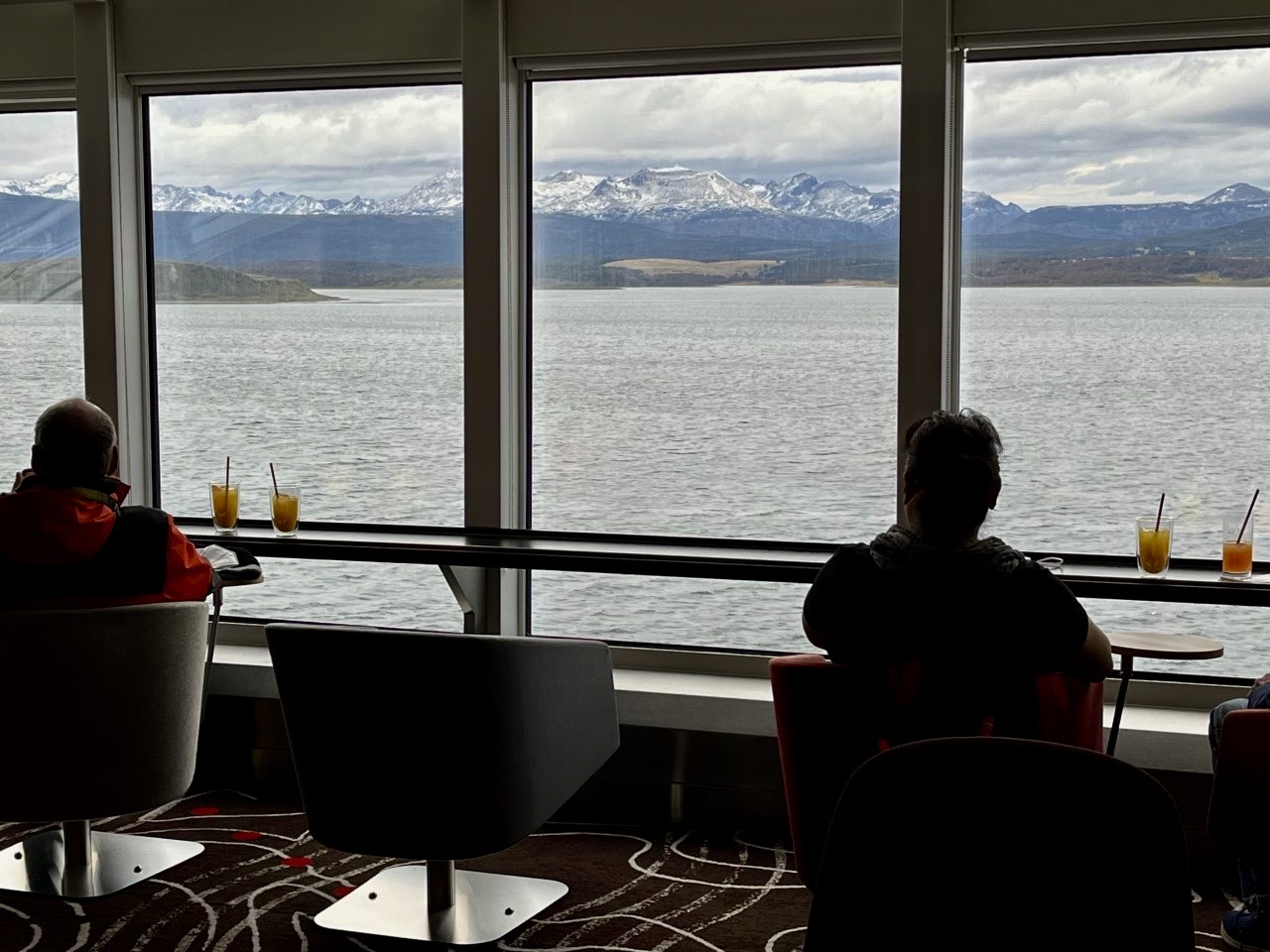 Dinner after drinks: a light feed for me even though I skipped lunch. Here are three “steamed buns with chicken.” They were good, and I had them with a beer. 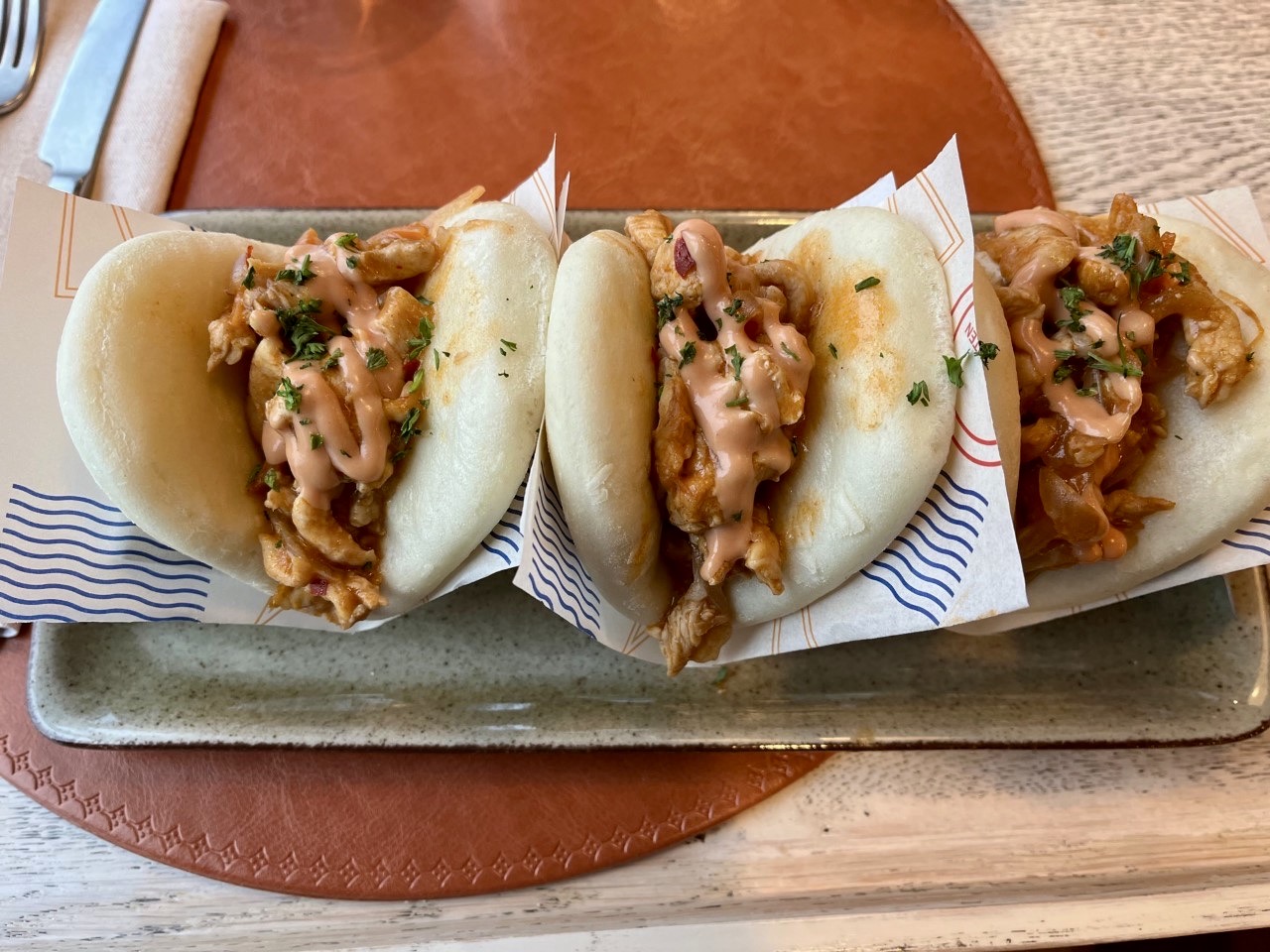 Dessert: crêpes with chocolate ganache. I still don’t think I’ve gained much weight on this trip, and it can’t be because I’ve done a lot of exercise. Our landings have been fewer than usually and I had only one good hike. 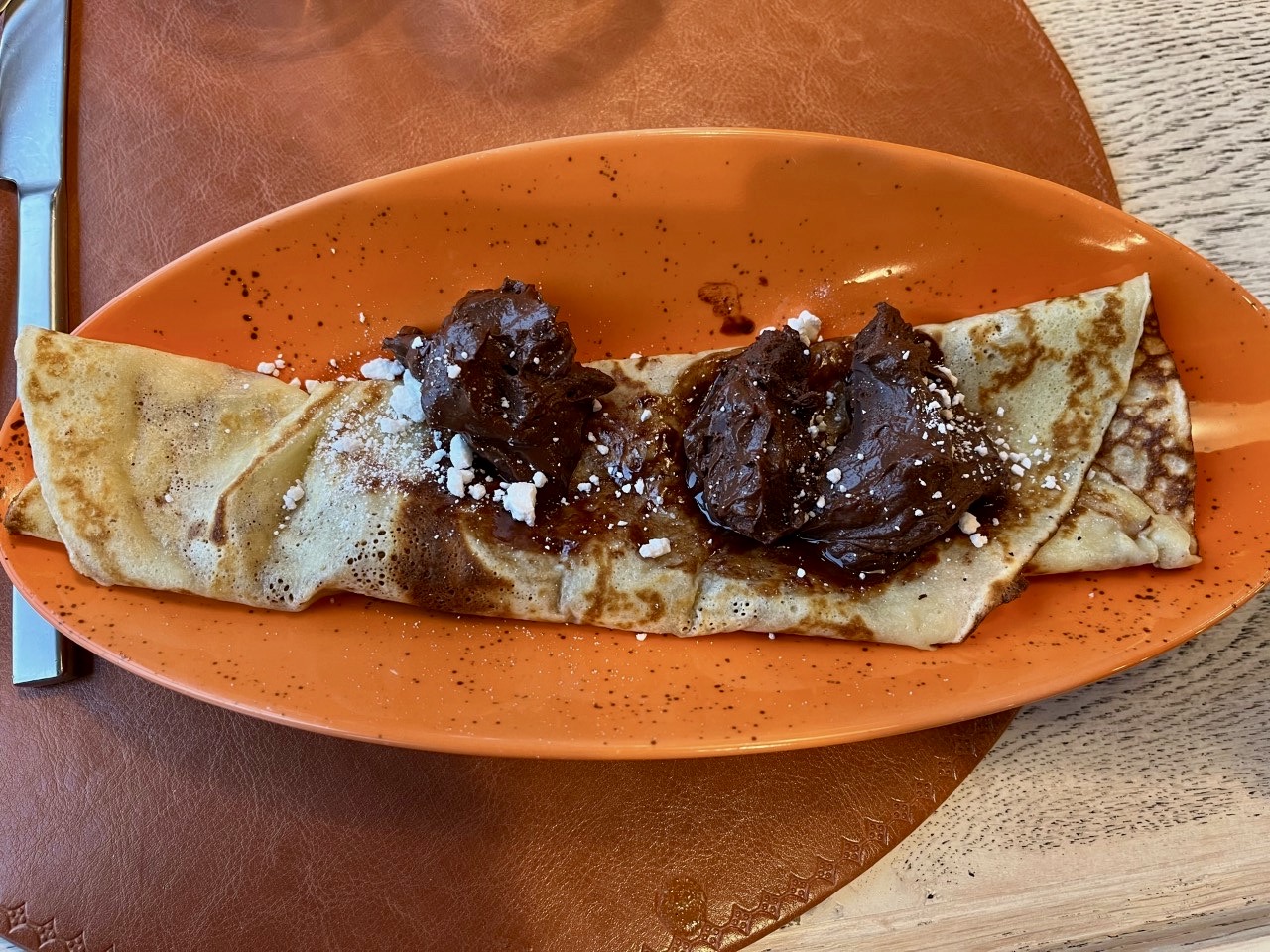 After dinner we stopped at the town of Puerto Williams, which, as the map above shows, lies on the south side of the Beagle Channel on the large island of Navarino.  It’s a small town (population 2,874 given in Wikipedia), but a stop here is mandatory to pick up the pilot, as parts of the Beagle Channel are too treacherous to be navigated by our own Captain. Or so stipulates Chilean law. 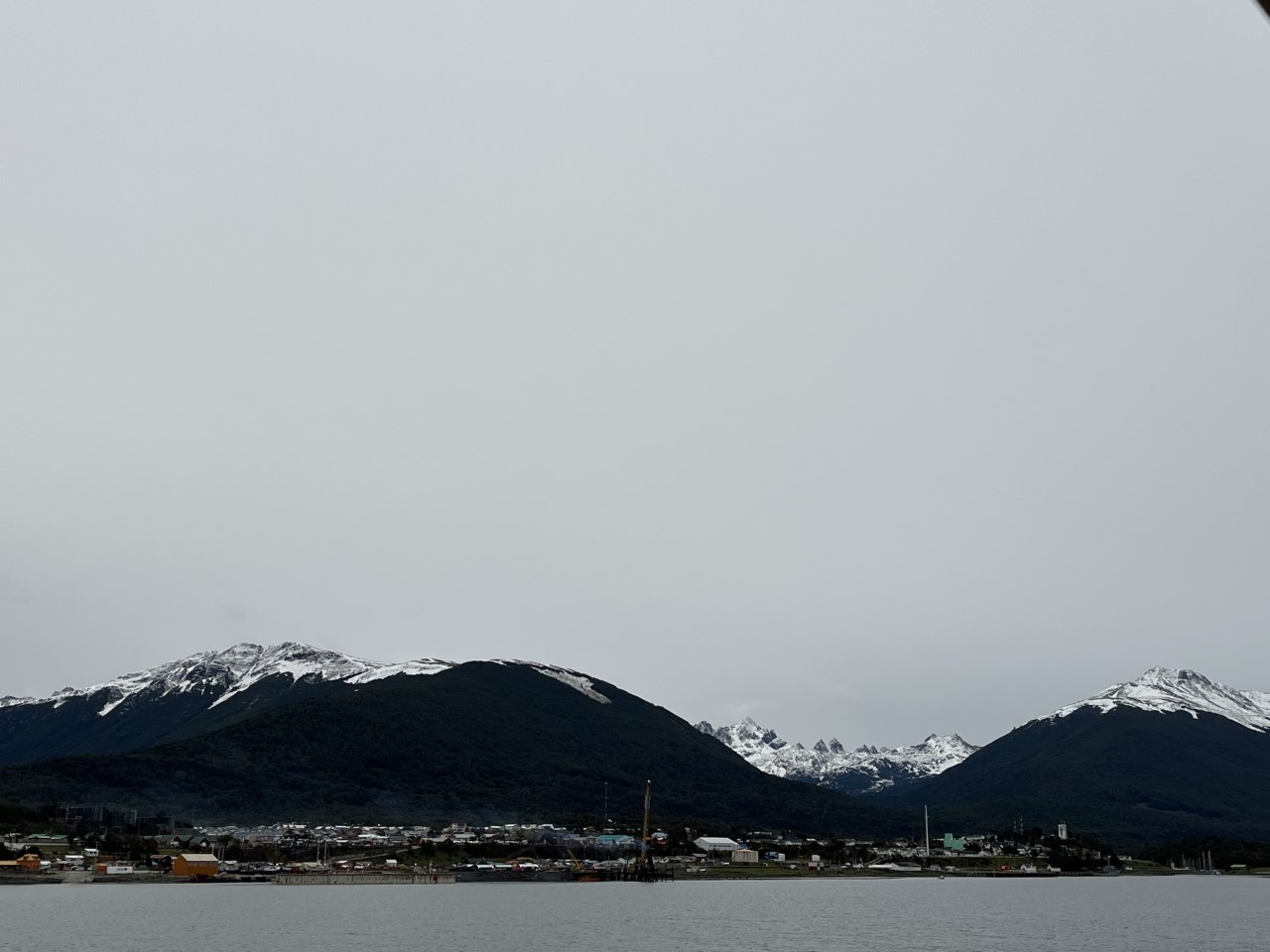 As you see, it’s a tiny town, and also harbors a Chilean Naval base. Here are some facts from Wikipedia; Puerto Williams, for instance, has a claim to be the “southernmost town in the world”:

The port attracts tourists going to Cape Horn or Antarctica; its tourism industry developed around the concept of “the world’s southernmost city”. Based on some definitions of what a city is, Puerto Williams could in fact be the southernmost city in the world. However, others dispute this because of the town’s small size and population in favour of Ushuaia or Punta Arenas. Chilean and Argentinian media, a bilateral agreement between Chile and Argentina, and the Puerto Williams administration identify it as the southernmost city in the world.

And so it’s stipulated!  More:

Puerto Williams is the port of entry and major hub for scientific activity linked to Antarctica and the islands south of Isla Grande de Tierra del Fuego. The University of Magallanes has a university centre in Puerto Williams. Weather stations and lighthouses at Cape Horn and Diego Ramírez Islands are supplied from Puerto Williams. The town has been a base for Chile to assert sovereignty around Cape Horn and support its Antarctic bases.

The reasons to stop here are few: to pick up pilots, who arrive by tugboat, to hike in the area, and to see the bow of the famous tugboat Yelcho, which rescued Shackleton’s men from Elephant Island in 1916. I’ve shown the preserved bow in Puerto Williams before, but here it is again (picture from Wikipedia): 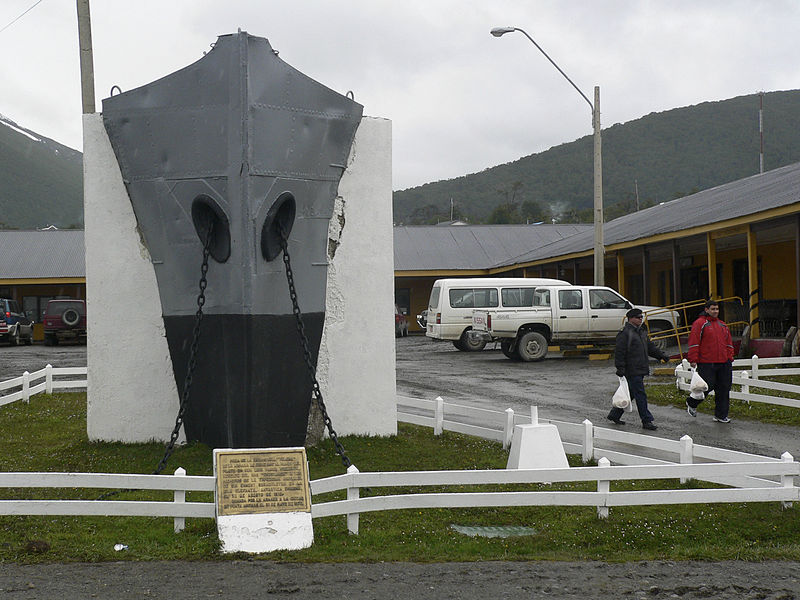 Here are the pilots arriving. There are actually two of them, as they stay aboard for 24 hours, with each having a 12-hour shift. And yes, the Chilean pilots actually do take the wheel, though it’s not really a wheel on the bridge, but a sort of gussied-up joystick. The ship’s passage is mostly controlled by computer, like an airplane, but there is manual control.

We weren’t allowed to visit the bridge this trip because of Covid (they don’t want the Captain ill!), but you can see my 2019 posts on what the bridge looks like, and how the ship is run, here and here. It’s a fascinating place, and in normal times groups of 15 or so get to visit for a half hour. 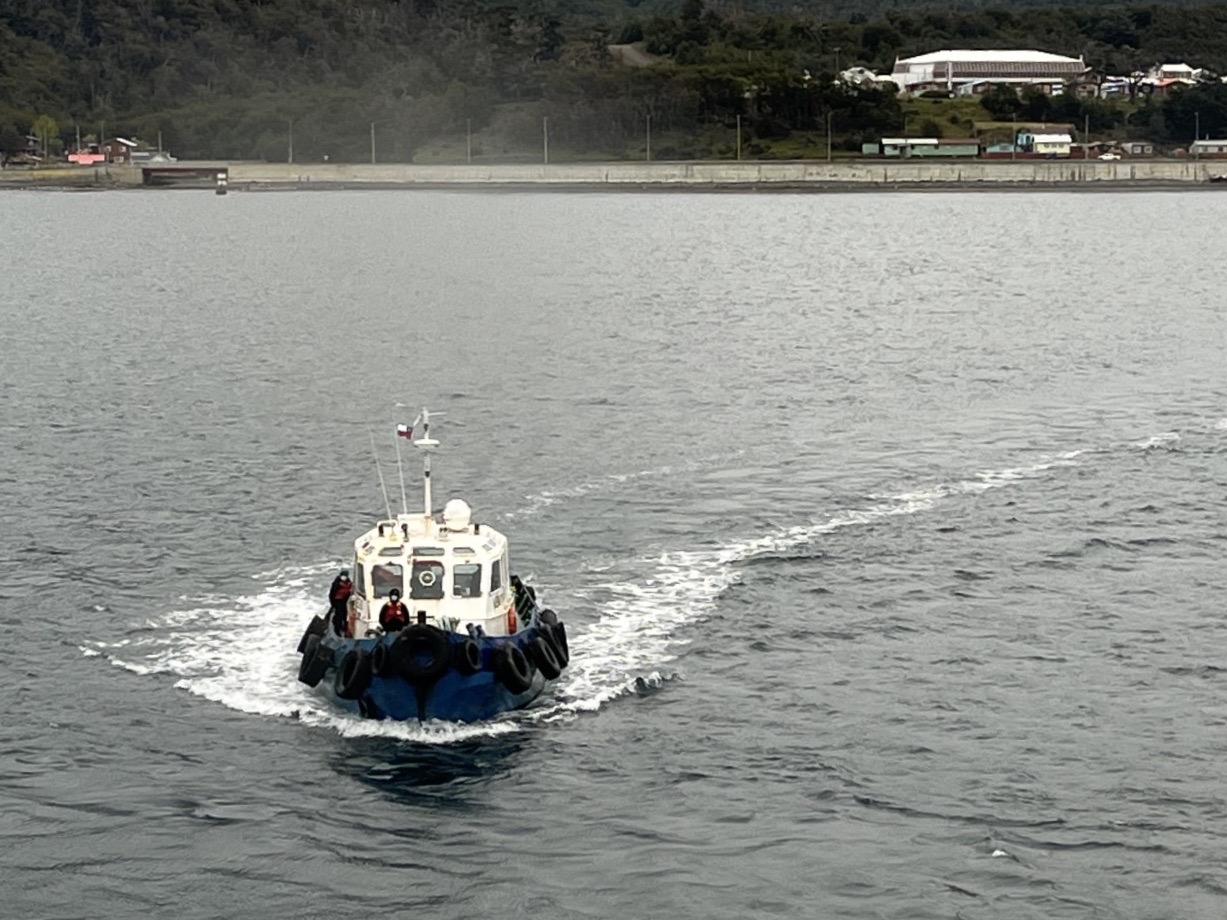 The Beagle Channel article on Wikipedia says this about pilots:

Although it is navigable by large ships, there are safer waters to the south (Drake Passage) and to the north (Strait of Magellan). Under the Treaty of Peace and Friendship of 1984 between Chile and Argentina, ships of other nations navigate with a Chilean pilot between the Strait of Magellan and Ushuaia through the Magdalena Channel and the Cockburn Channel to the Pacific Ocean, then by the Ballenero Channel, the O’Brien Channel and the northwest branch of the Beagle Channel.

The pilots come aboard on Deck 4, which is the way passengers and crew enter and leave the ship. Decks below that are for crew, staff, and machinery; decks above that have passenger cabins, restaurants, and the bar. They are segregated, with a special card needed to get into crew quarters. I had one on my 2019 trip and could visit crew facilities and dine with them, but since I’m officially a “passenger” this time, I can’t go “downstairs.” 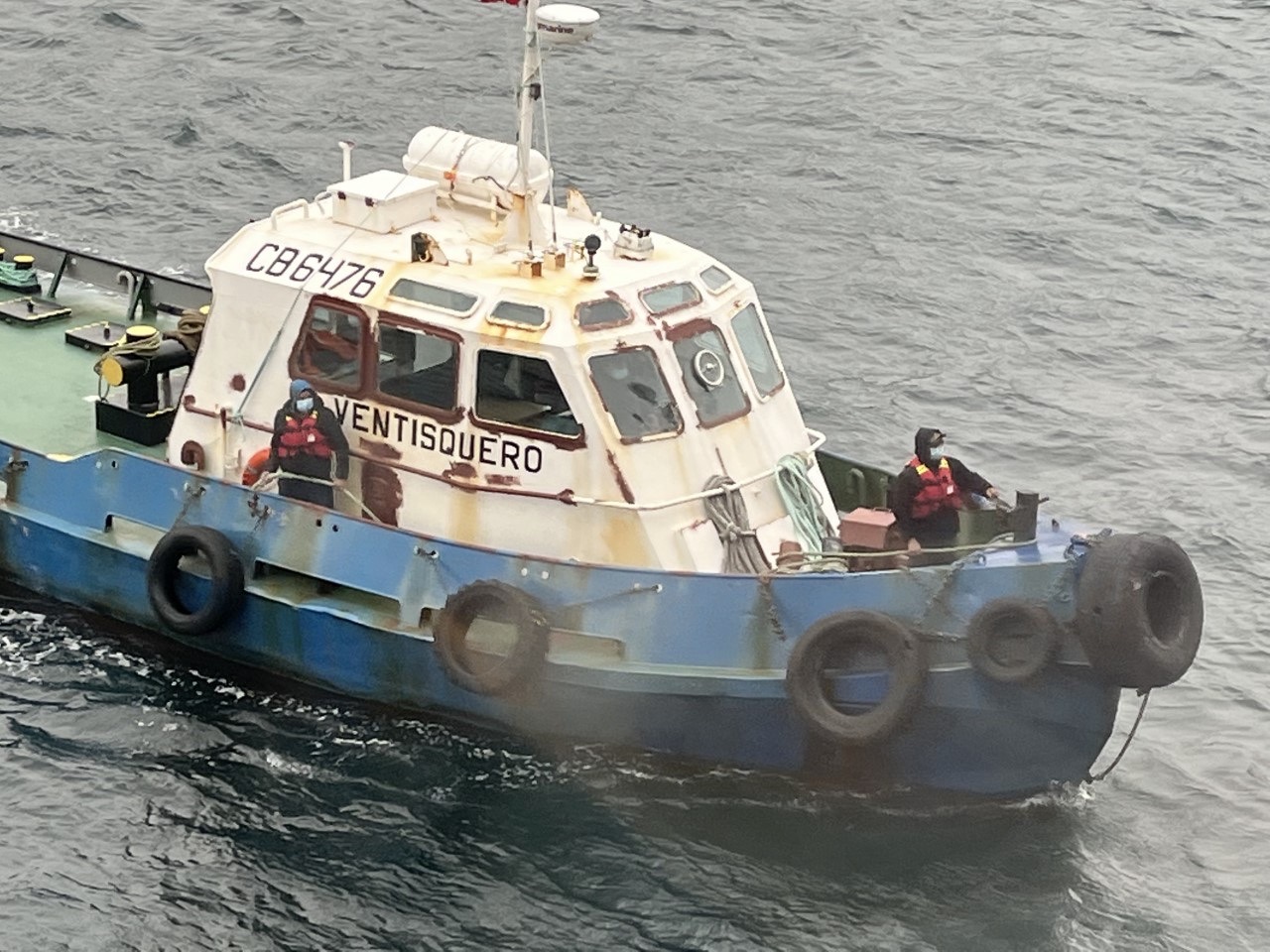 The cabin steward just knocked and presented me with this certificate for crossing the Drake Passage. I’ve never gotten a certificate in the four previous times I’ve done this, so it must denote our surviving the horrible seas: 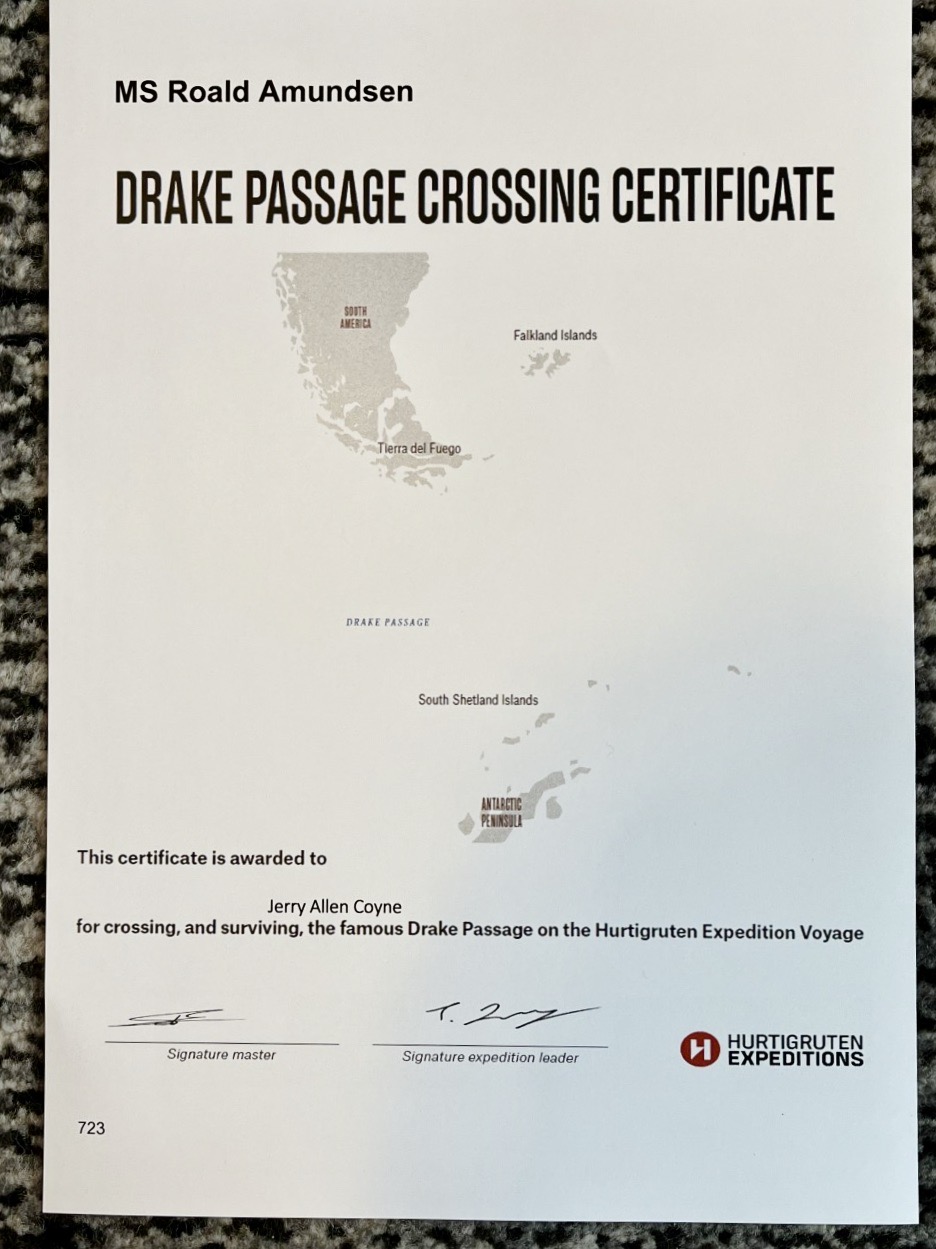 We’re now headed north to the home port, Punta Arenas. The arrow was the fjord we visited this morning, and we should be in Punta Arenas by evening: 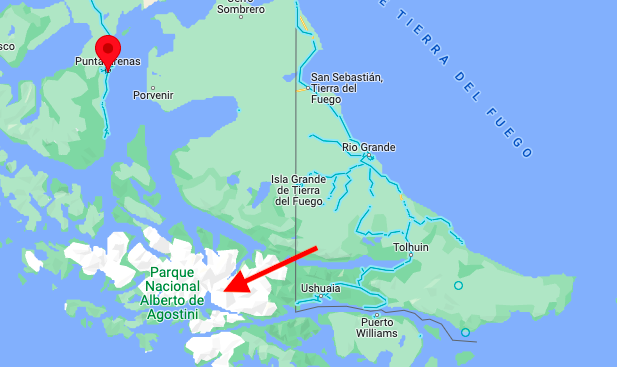 7 thoughts on “Antarctica, Day 13: Back though the Beagle Channel”