To see a lot more photos, have a look at my post from this same stop in 2019.

We are now inside the caldera of Deception Island in the South Shetlands, an archipelago that I described this morning and showed some maps. It’s a relatively quiescent volcano that blew up and collapsed thousands of years ago, but undergoes semi-regular underwater eruptions, the last being in 1970.

It’s about 15 km (9.3 miles across), and is a perfect natural harbor, which meant that sealers and whalers moored here and dealt with the animals. Sometimes 100 ships at a time were moored in the quiet waters, all bent on killing sea mammals. Here’s a map. At the bottom you can see “Neptune’s Bellows” a 500 meter opening that is the only entrance to the caldera. We landed at “Telefon Bay” to the NW (named for a ship, not the instrument) to the northwest) and climbed to the top of Telefon Ridge. 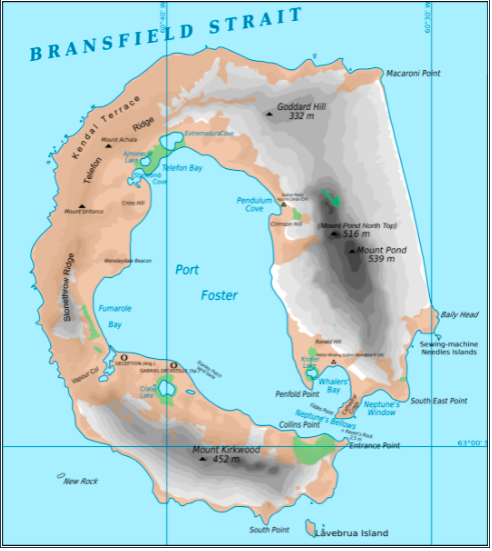 The fur seals were nearly extinct by the mid-18th century, and so they turned to whales. Who knows how many mammals gave their lives for fur or oil. Fortunately, the carnage is prohibited now, and the only people here are tourists, as well as the people who manage two research stations during the summer: a Spanish one and an Argentinian one.

Here’s what I think is the Argentine base: 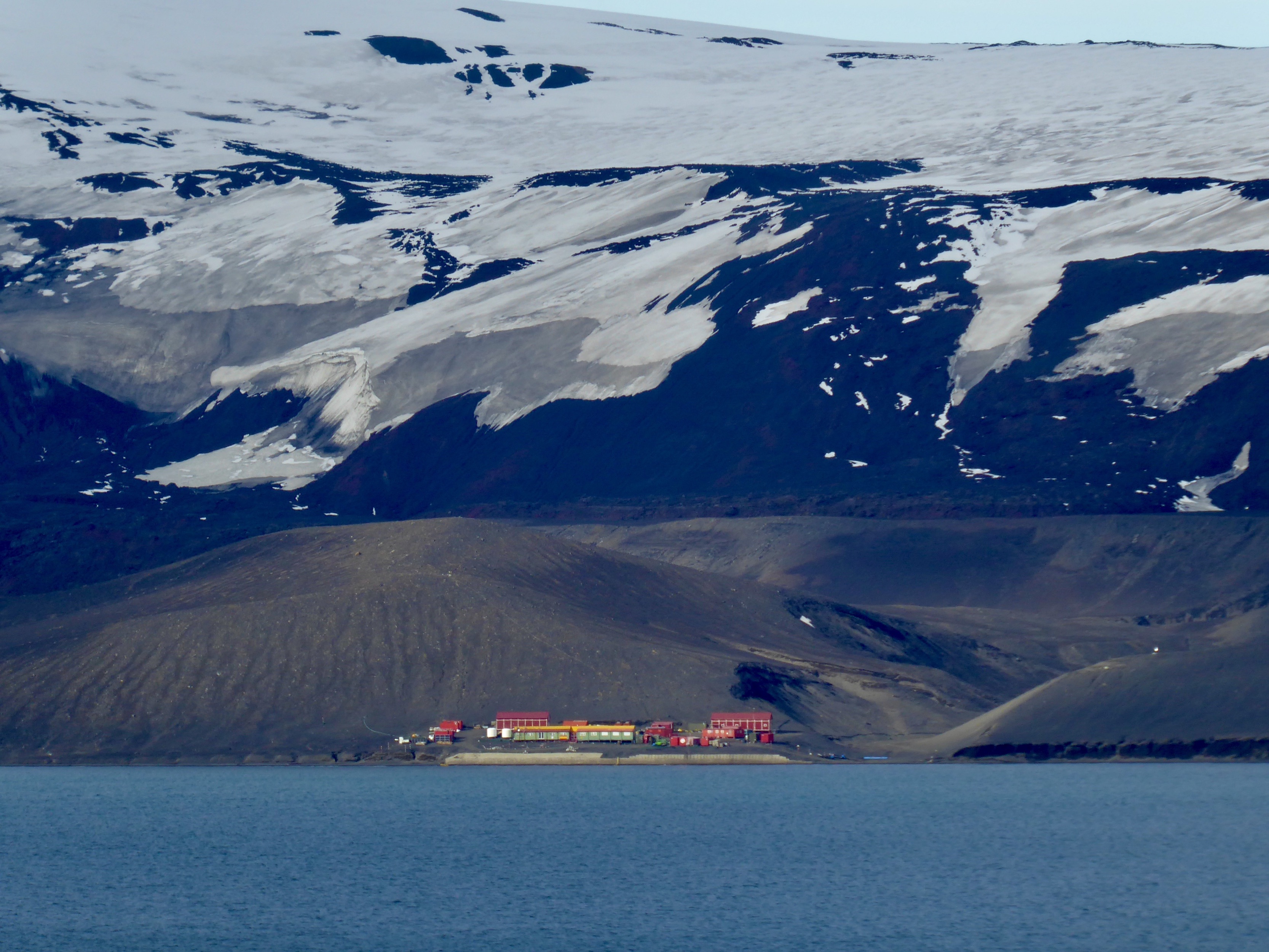 Inside the caldera: a panorama (I can never do good panoramas):

The Amundsen at rest in the caldera, photographed from shore. The waters are calm and peaceful. 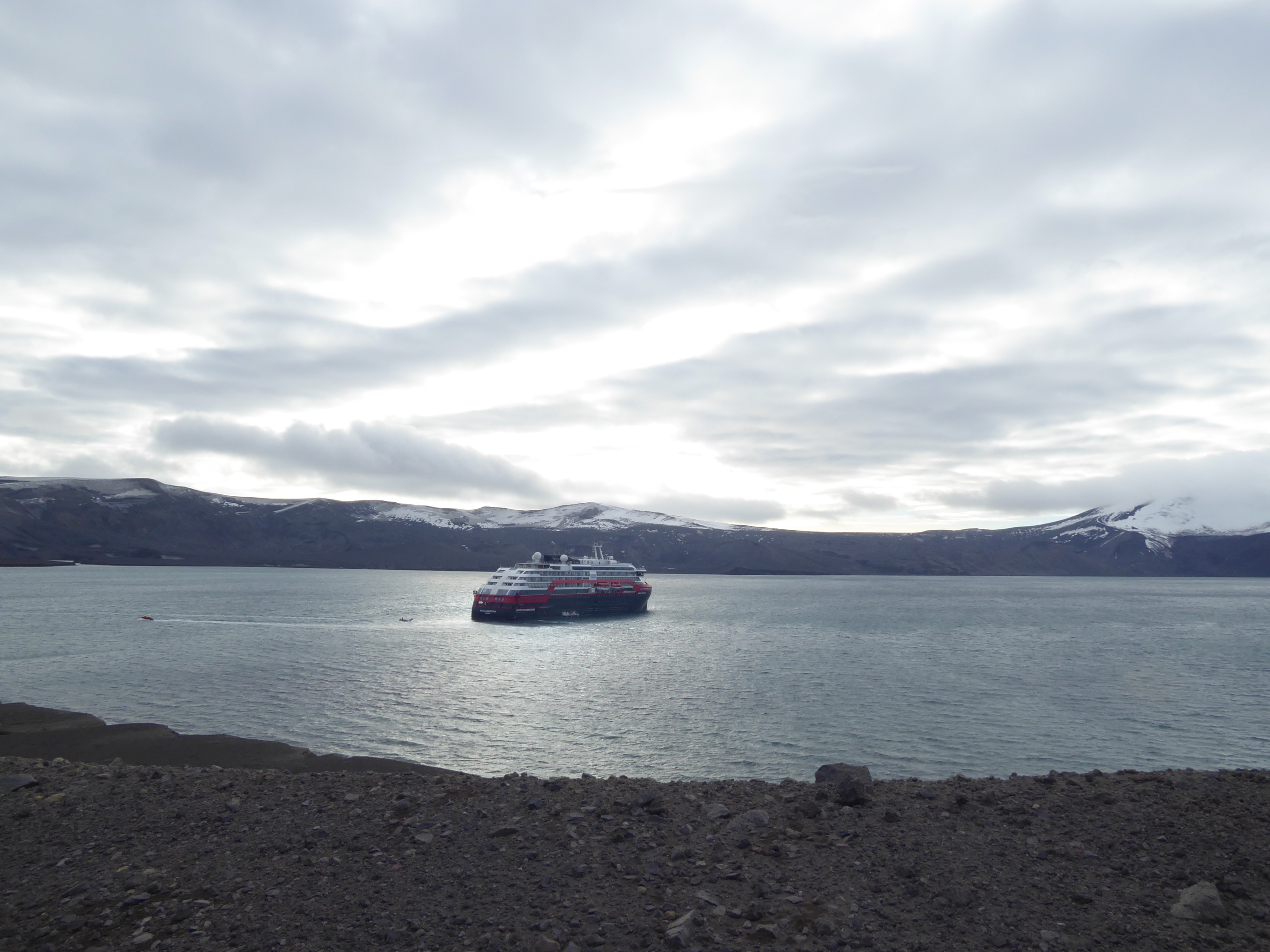 From the far end you can see the small opening of Neptune’s Bellows. There are 500 m separating the sides, but for a ship like the Amundsen, there’s only 200 feet of navigable space because of rocks beneath the surface. Had this opening not existed, a lot more animals would have survived the sealers and whalers. 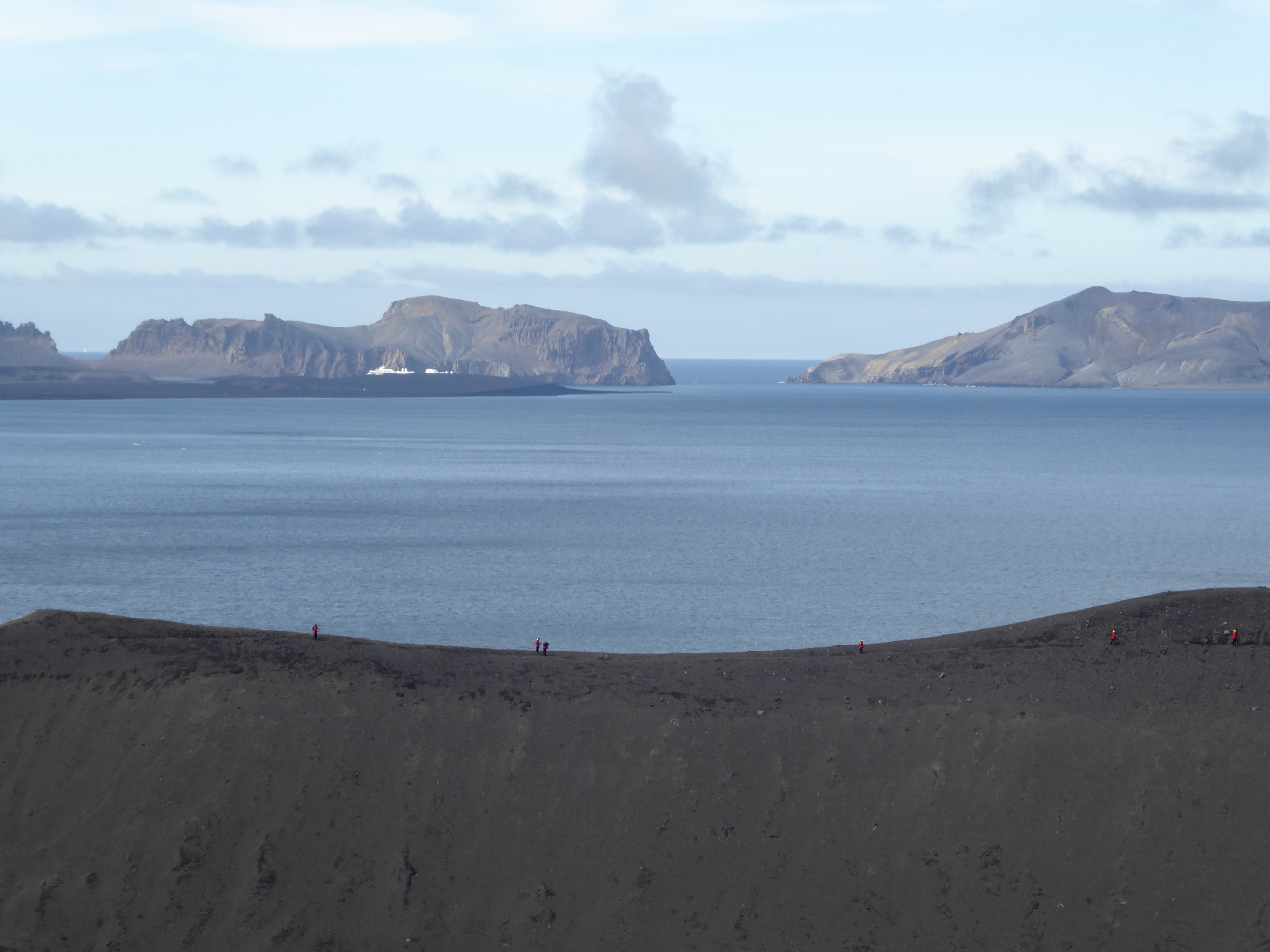 Our goal is that distant ridge, the summit of Telfon Ridge to the left of center (the area where we landed is called “Telefon Bay”). If you enlarge this or the next photo, you’ll see people standing on top of it. It’s a stiff hourlong climb for an oldster like me, and there are places where, if you slip, you fall off the ridge down the rocks and die. I have to admit that I was a bit scared at times. 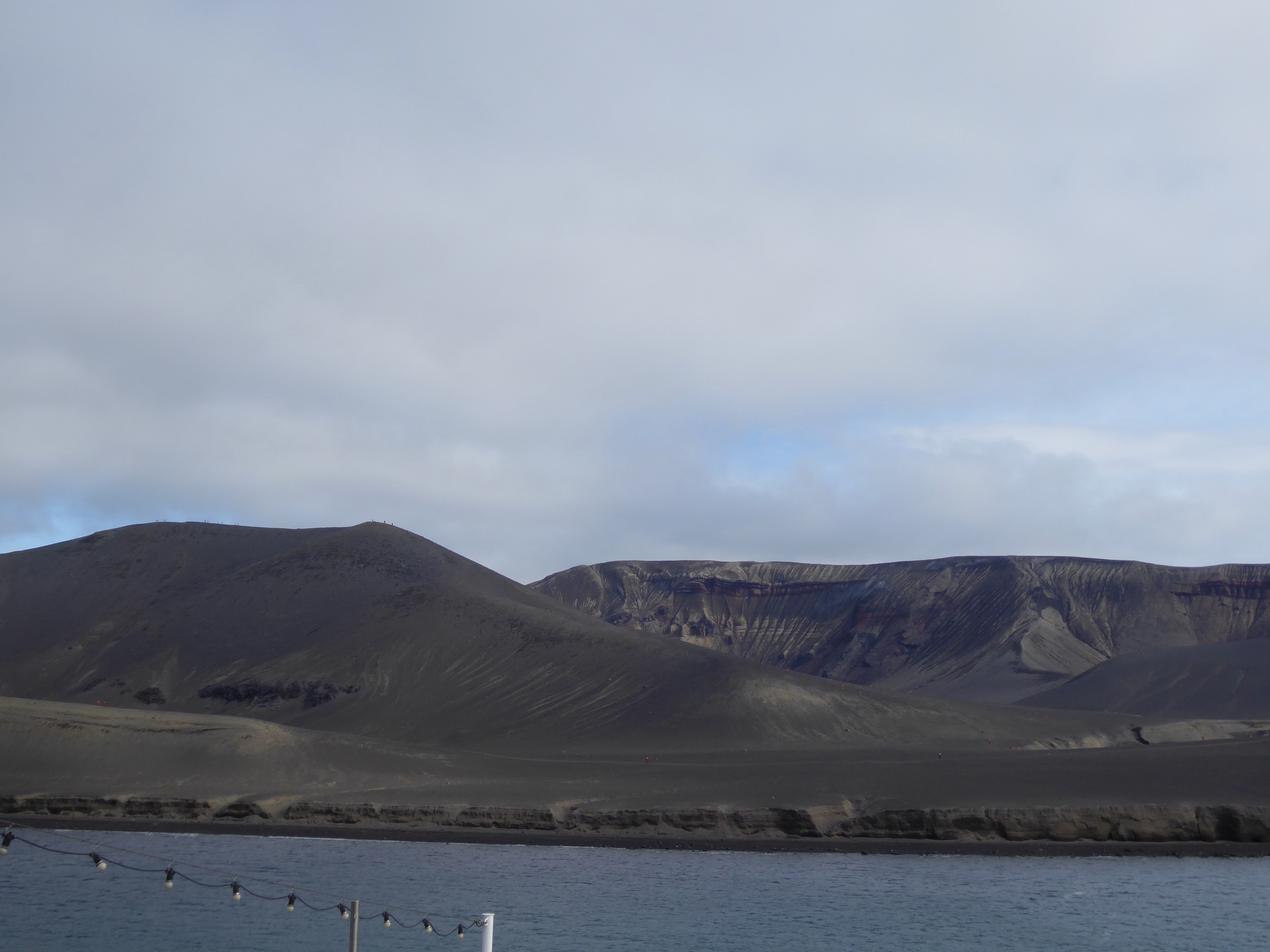 The goal (a high zoom from the ship). I made it, too. So did many people who were old like me, but many of them are Germans and intrepid hiking is in their genes. 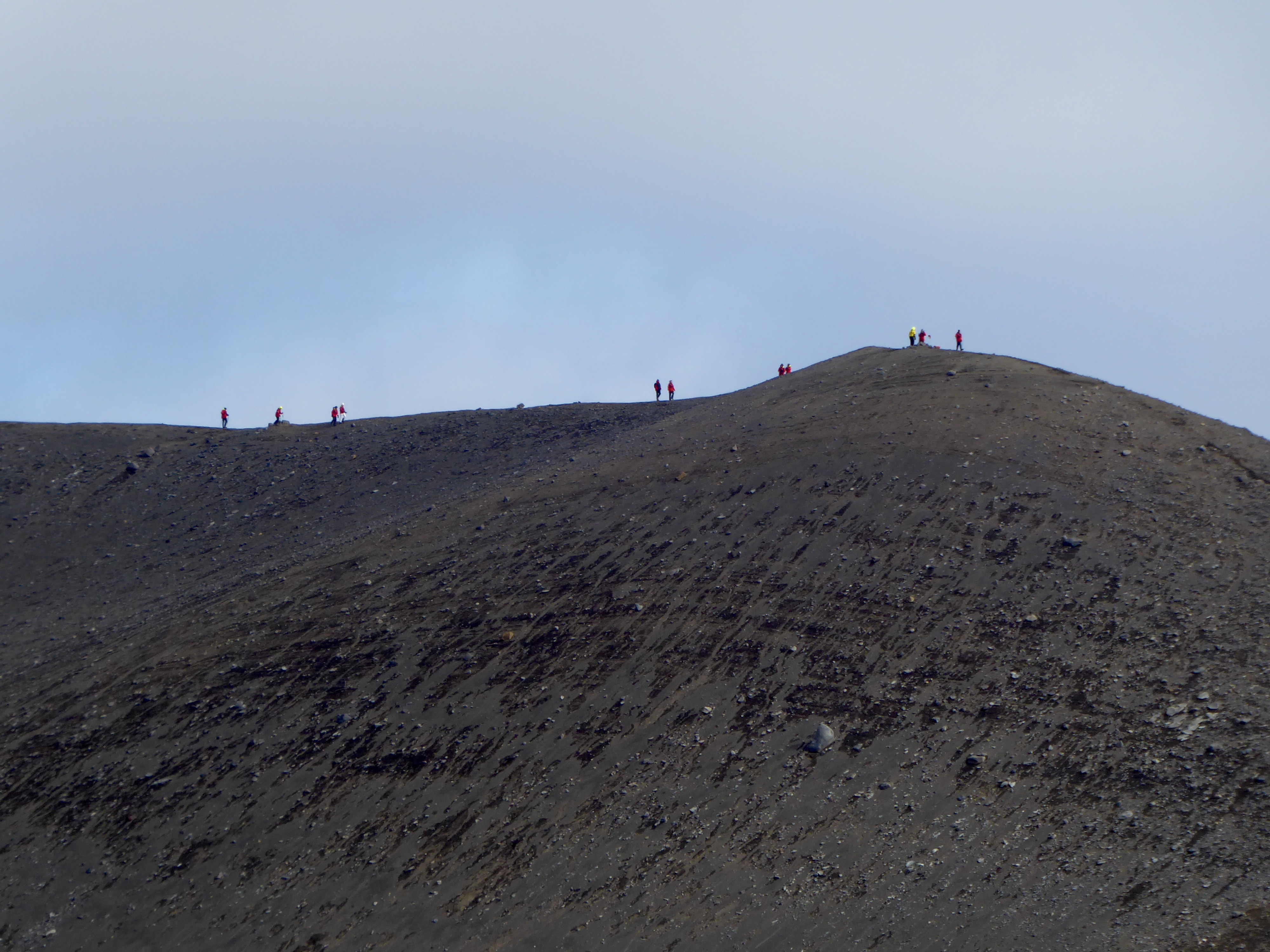 Views on the way. When I was last here in October of 2019, that mini basis was filled with beautiful green water. (You can see that in my earlier post.) 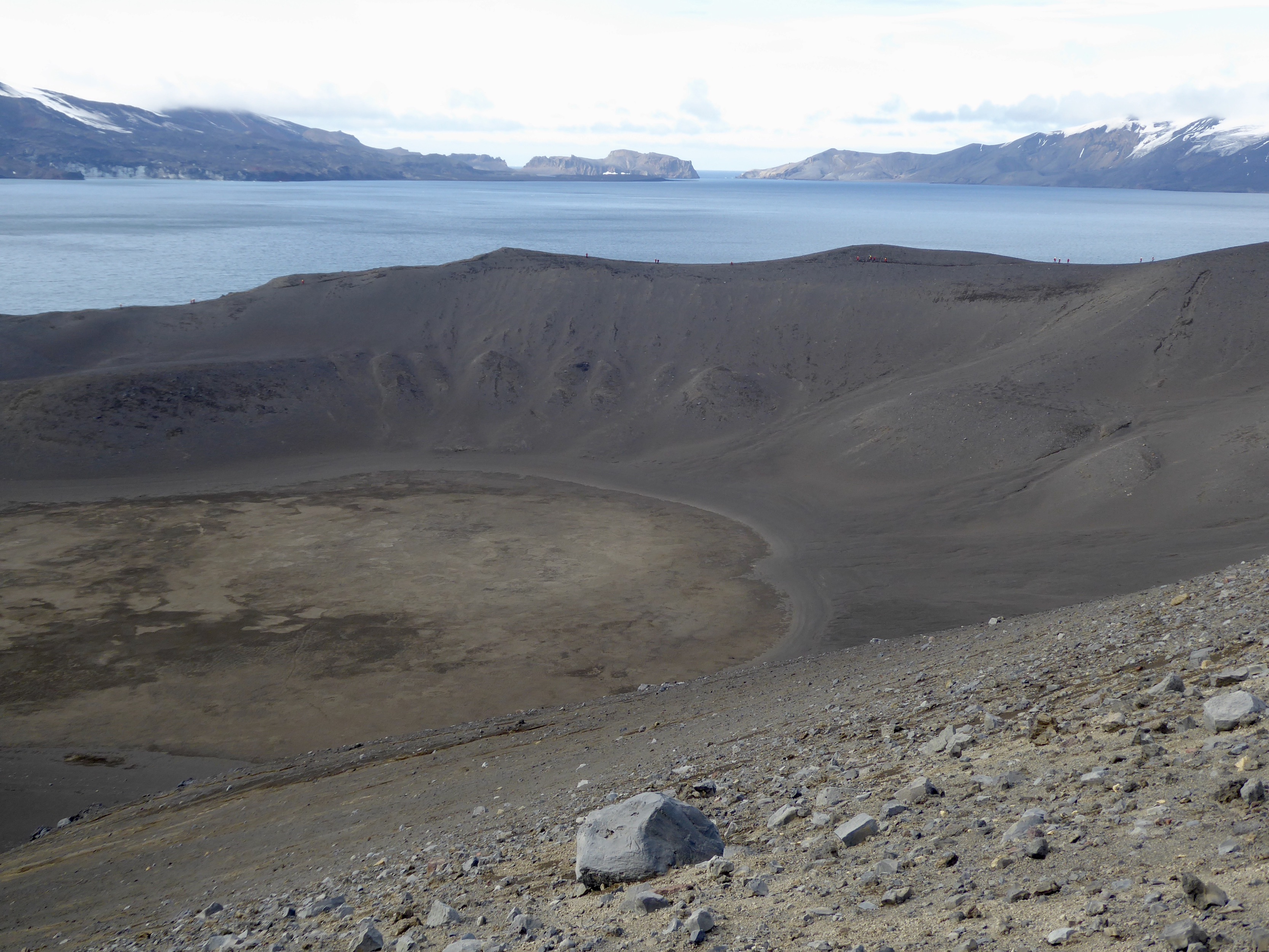 Hiking up. You can see two passengers to the left, wearing, as do I, the official Hurtigruten red rain parka: 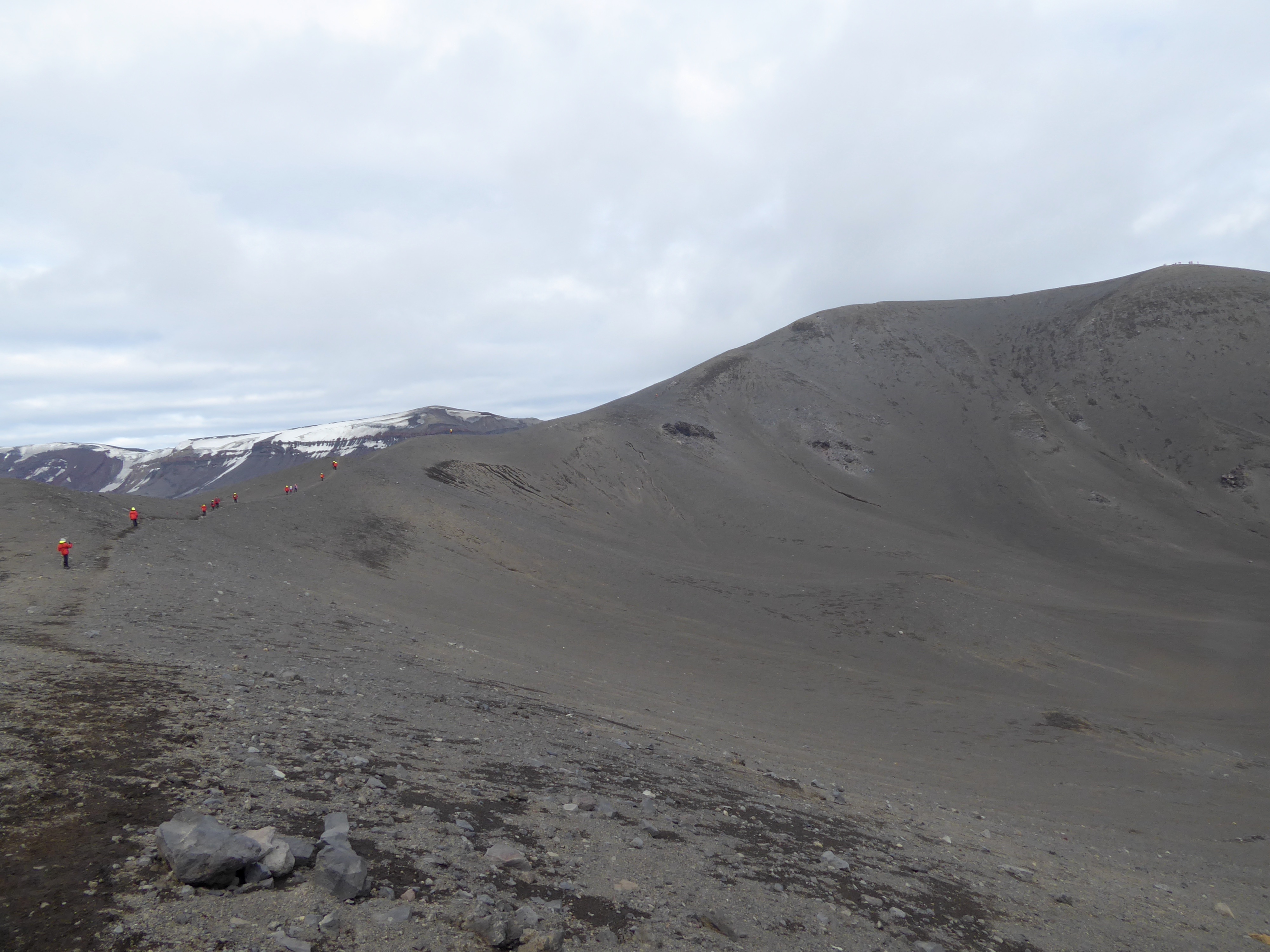 I took a selfie in the goggles of our resident ornithologist, but I forgot to look out from behind the camera (these are taken with my Panasonic Lumix): 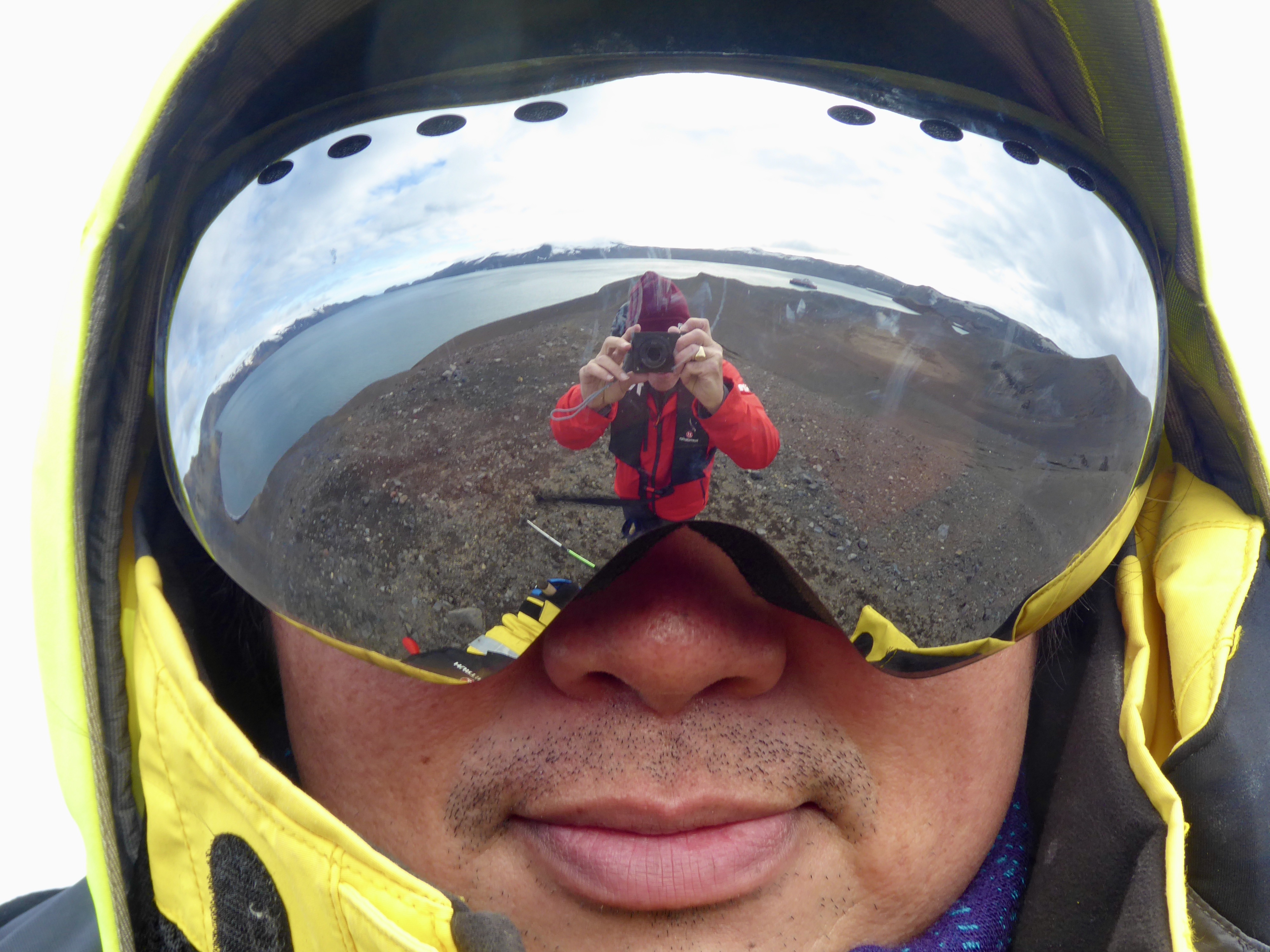 The caldera and ship from the top of the ridge. 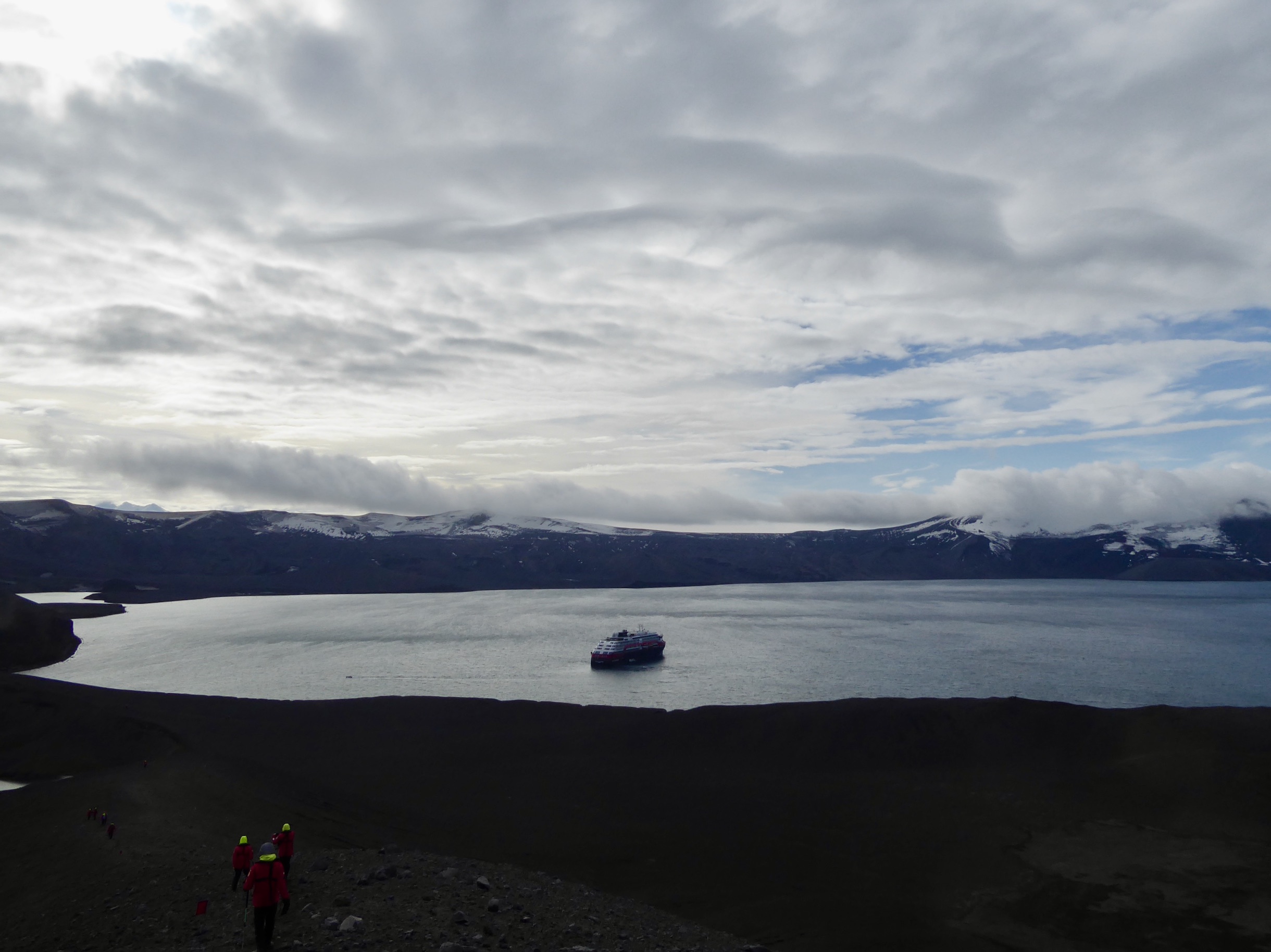 Views on the way down, which was much easier than on the way up, but there were still dicey bits where you could fall. 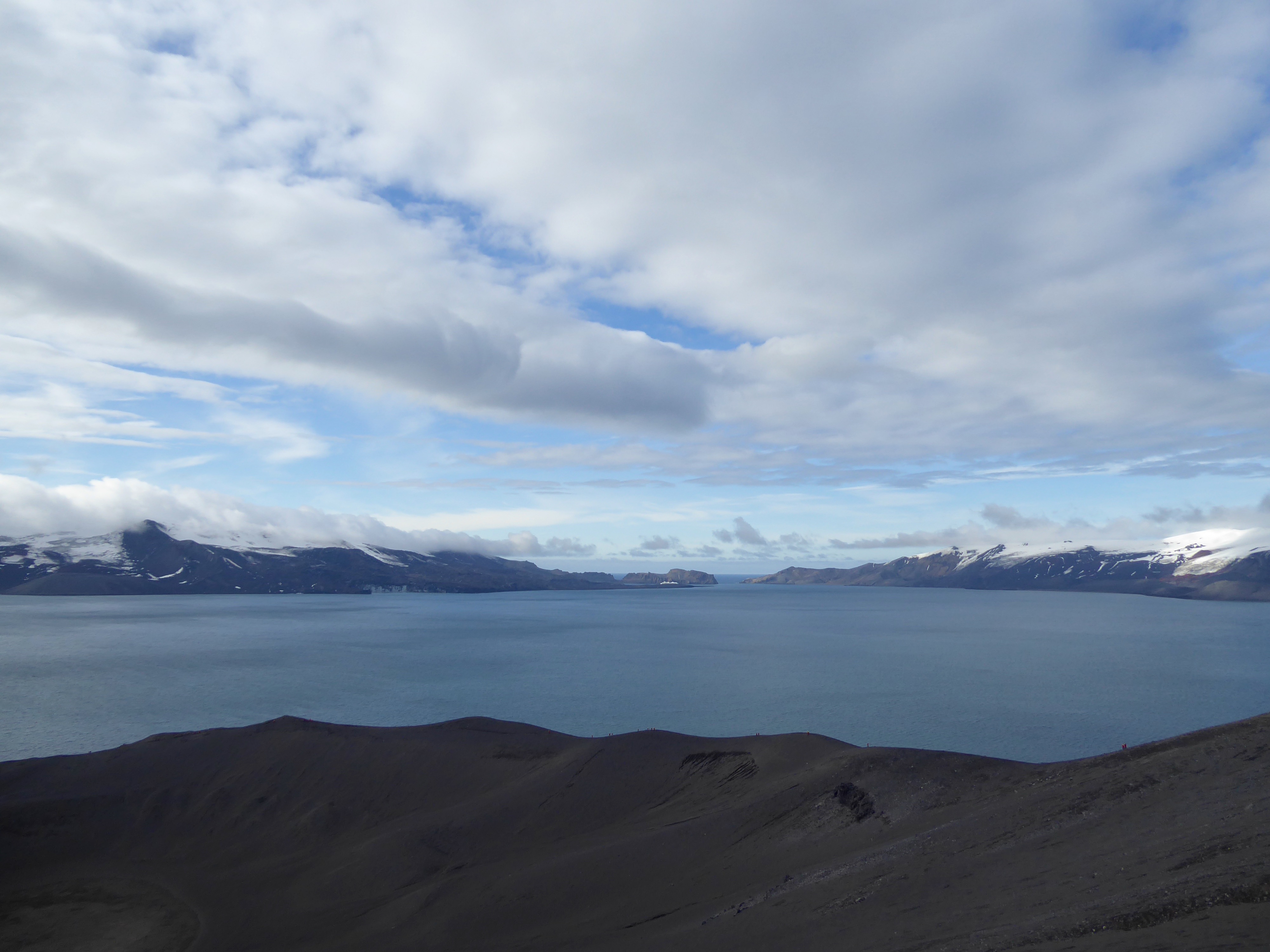 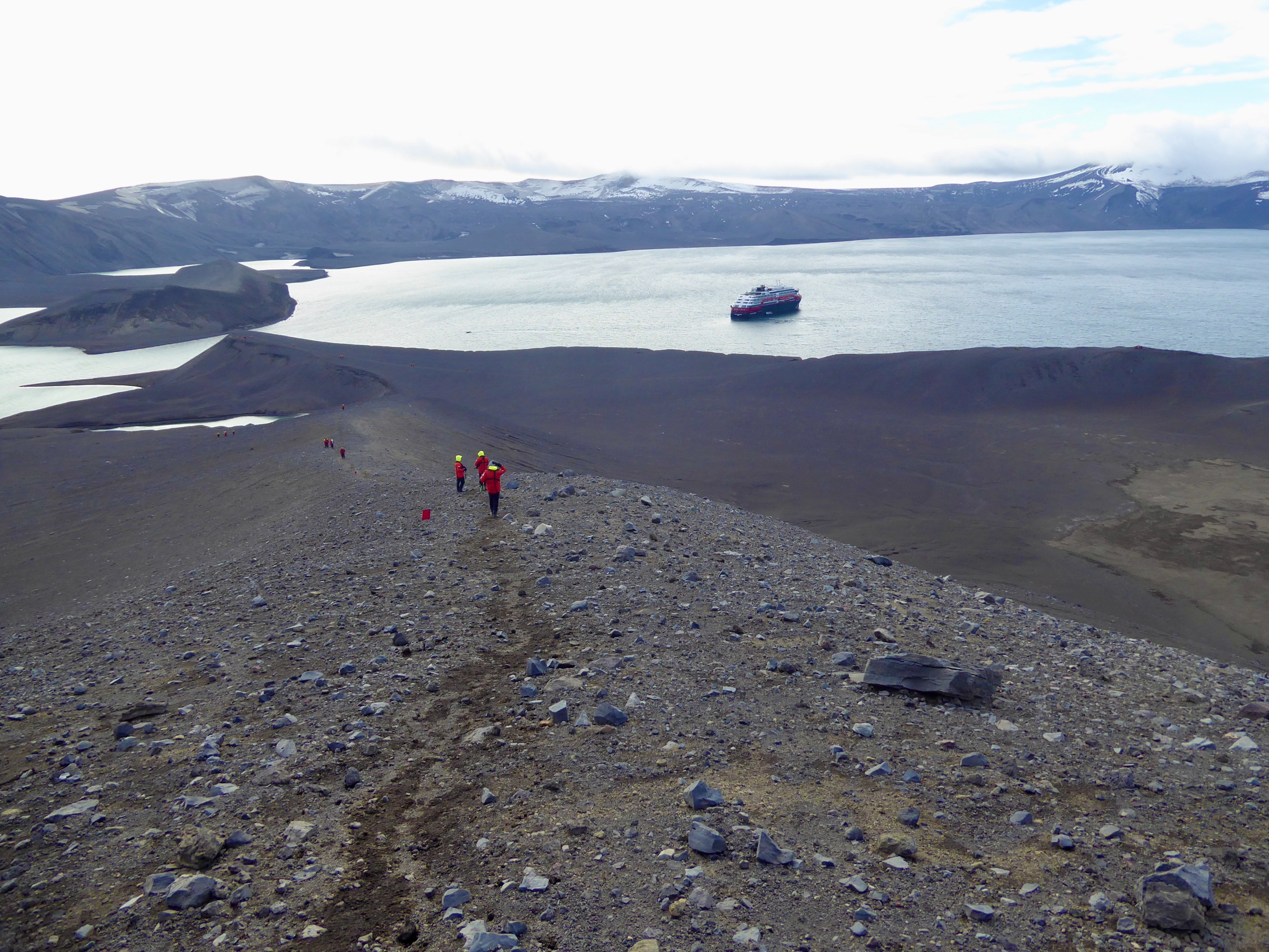 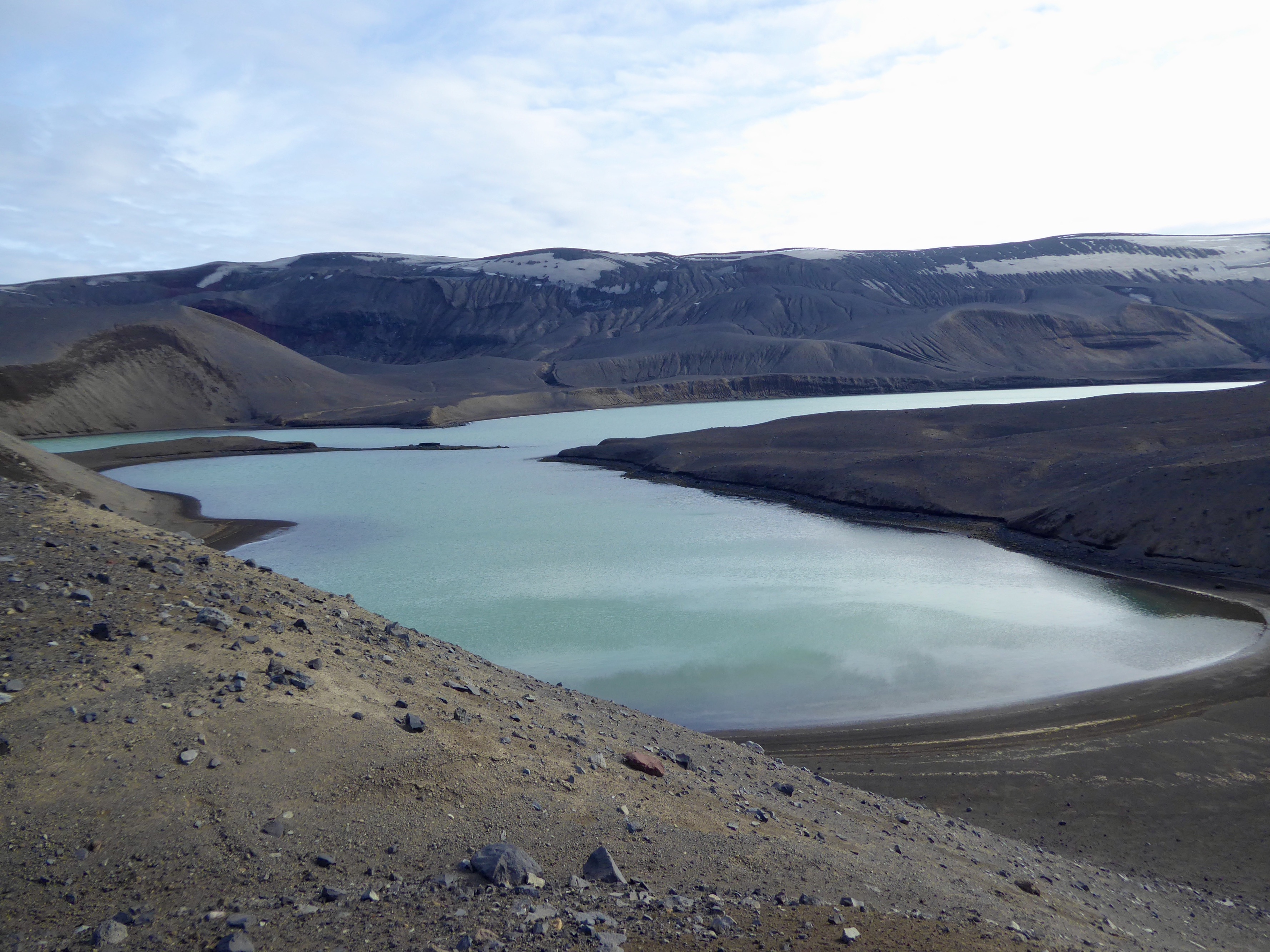 And back to the landing spot after a two-hour trek, which I hoped burned off at least the equivalent of a milkshake. Notice the group to the right. They were doing the “Antarctic plunge”, taking off their clothes and jumping into the water, which I’m told hurts like hell. But you get a certificate for it (not me!) and the Expedition Team is there with dry towels. 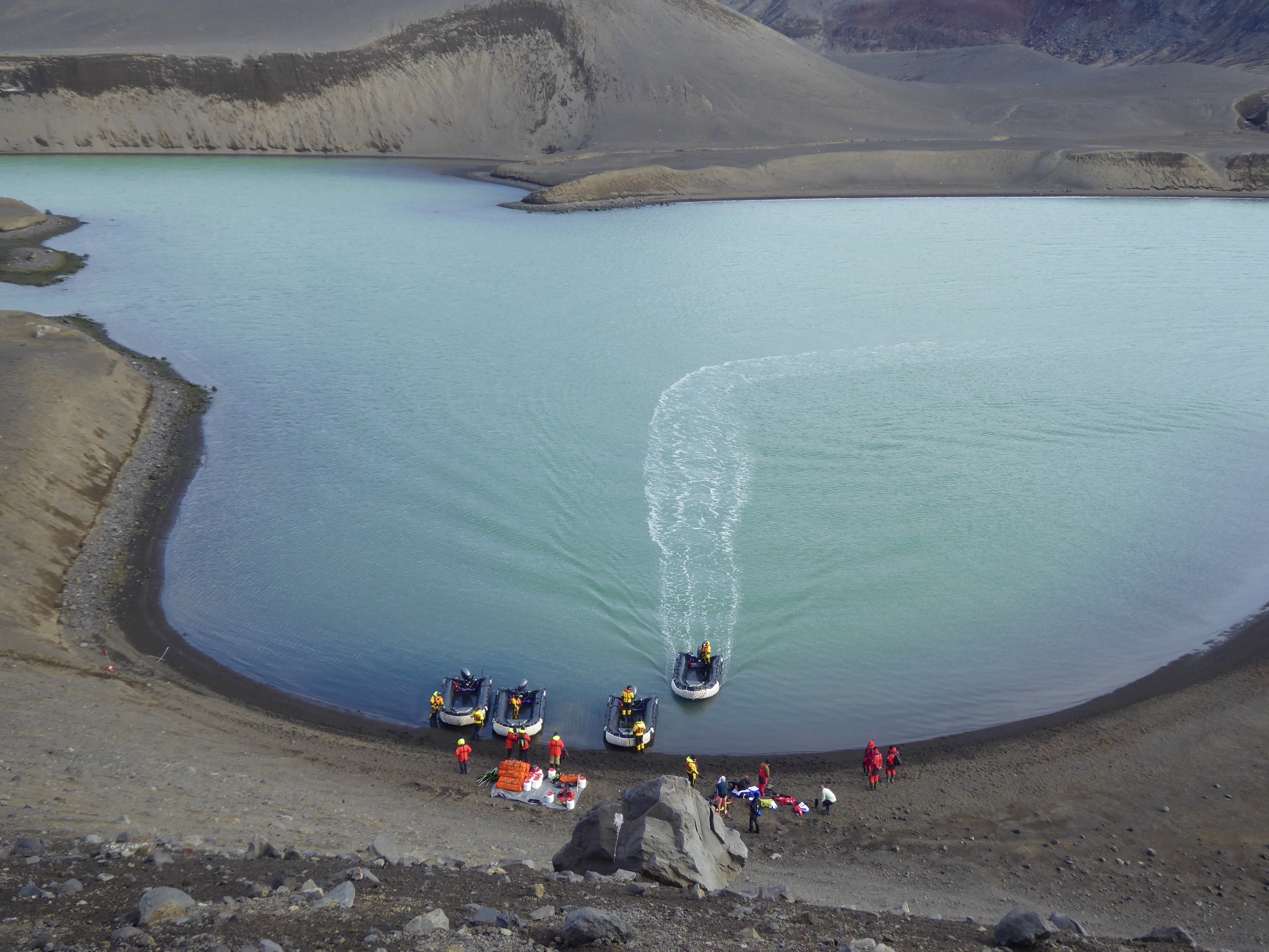 The Zodiacs back to the ship, with the masochists to the right. I wonder if they will frame their certificates.

Notice the orange bags: the “land kit”, which contains supplies to allow people to overnight on the island should there be an emergency, as well as other requisites (presumably stretchers and the like). 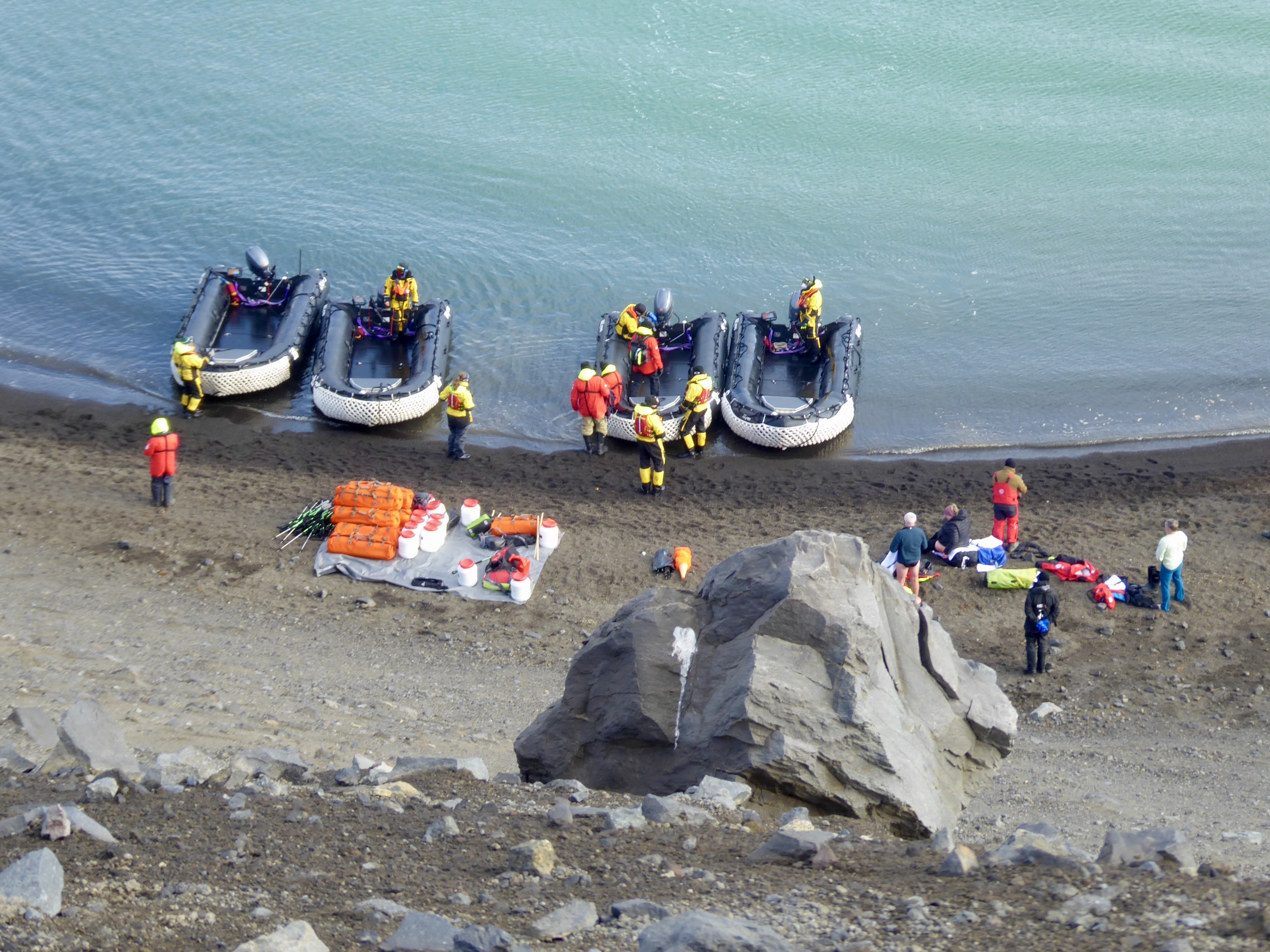 After a stiff hike, lunch at the Aune. Menu items exactly as listed: 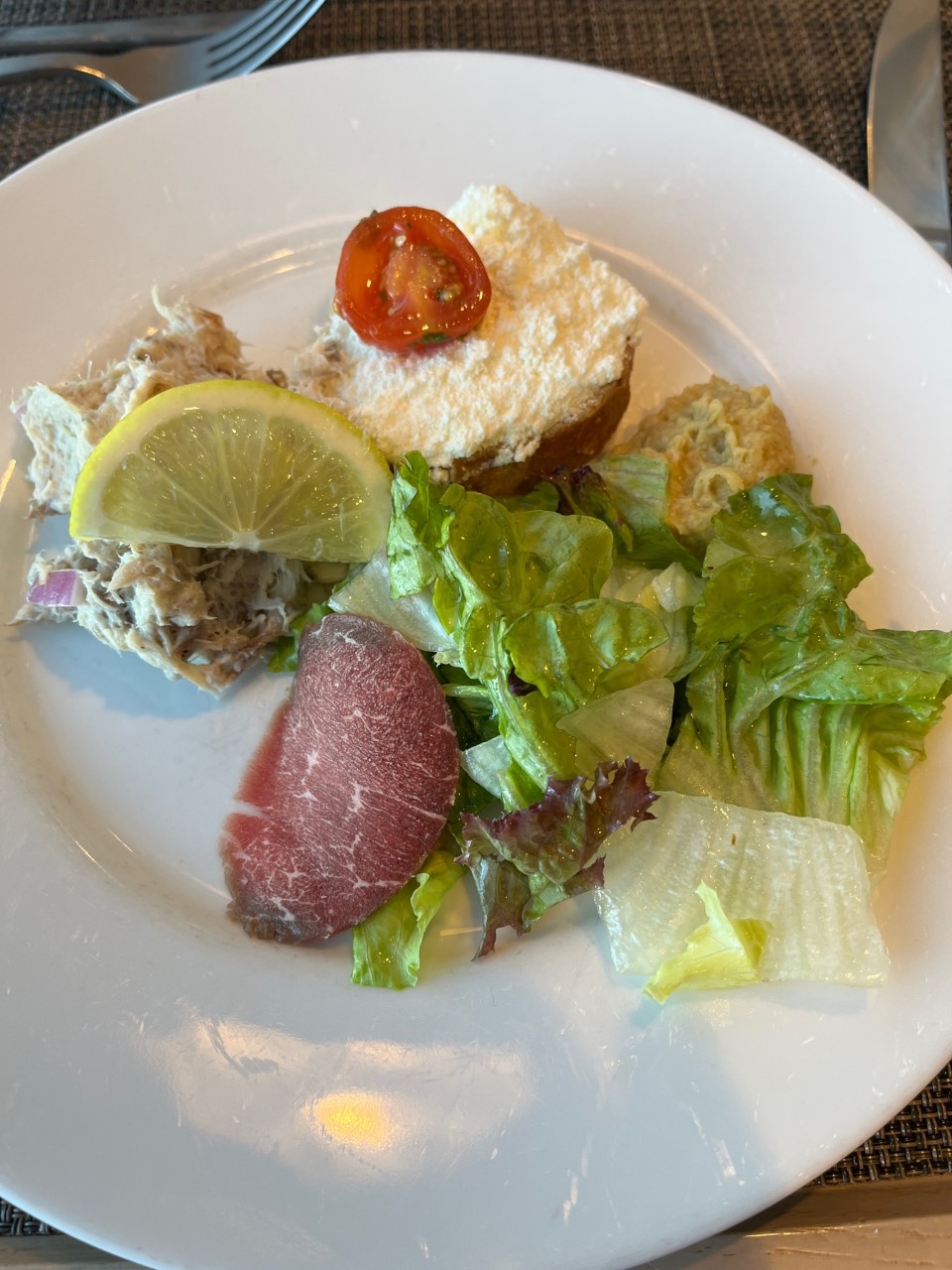 This is basically a gussied-up hamburger: 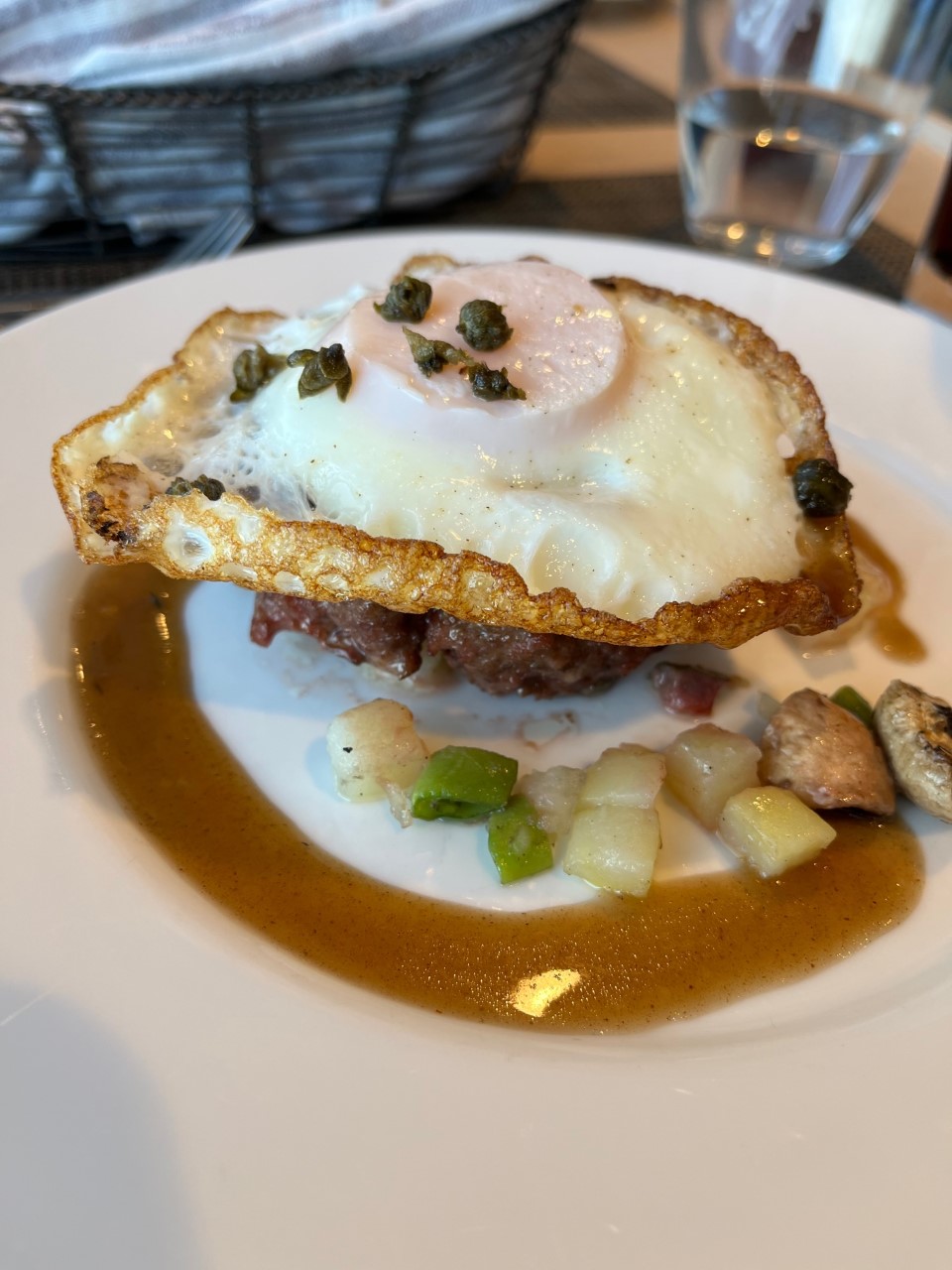 “Brownies with cream and applecompote” 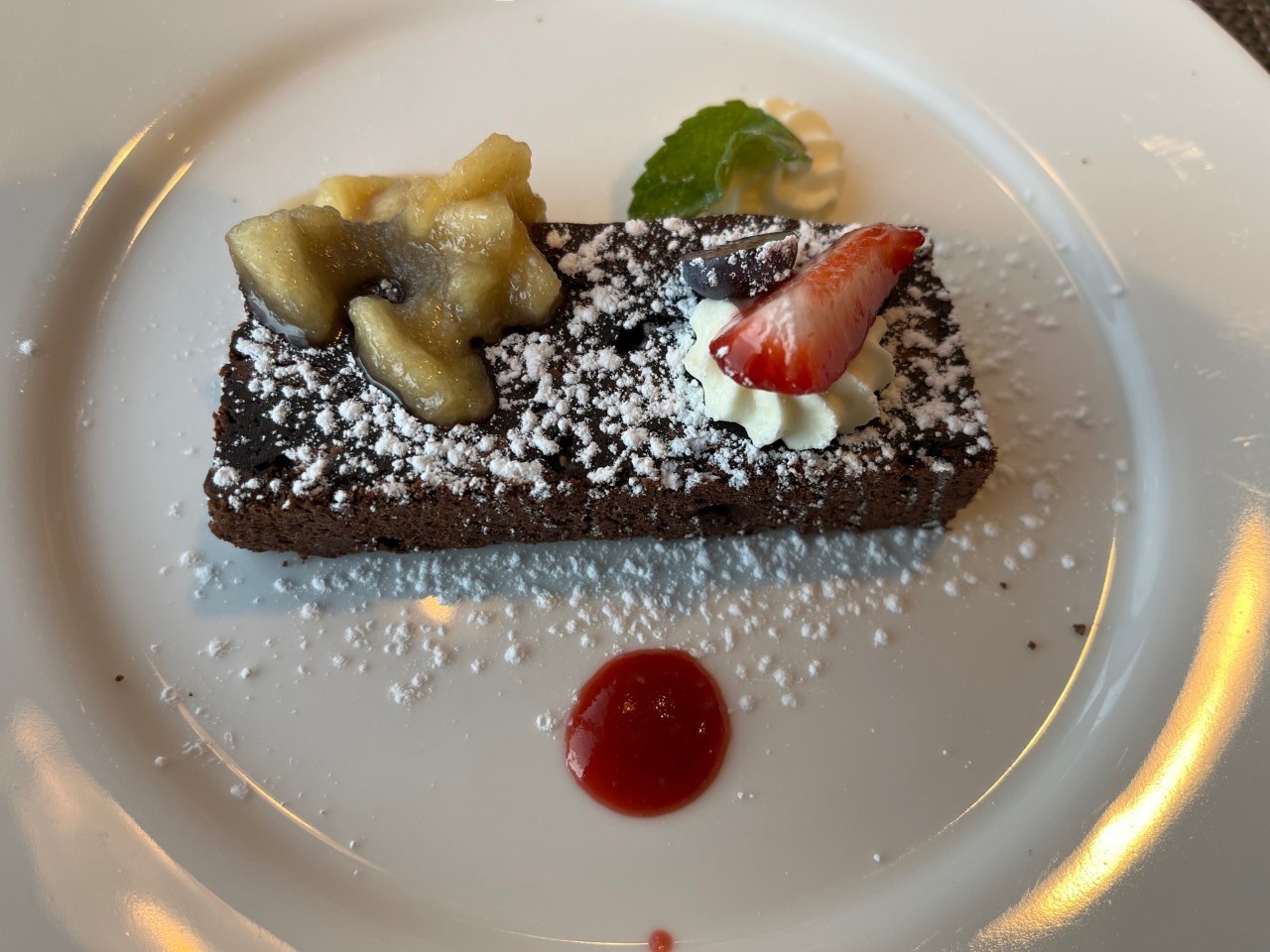 And then a stroll around the top deck, some posting here, and then our egress through Neptune’s Bellows. We get very close to its rocky walls: 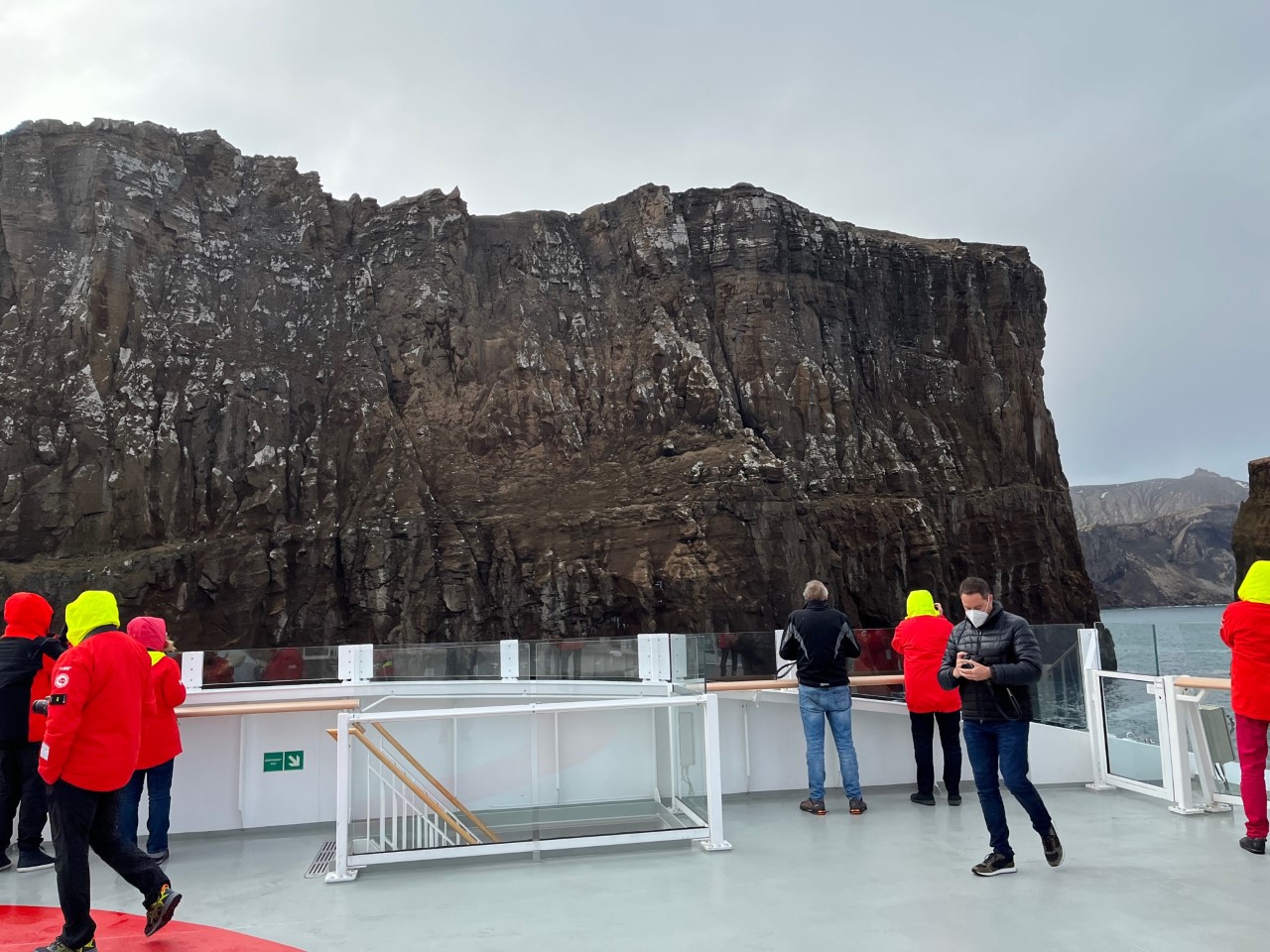 The Bellows from the outside. It doesn’t look too daunting, but for a big a ship like the Roald Amundsen, it’s like threading a needle. Because of the subsurface rocks to the left below, you have to pass close to the rock wall on the right. No errors can be tolerated! 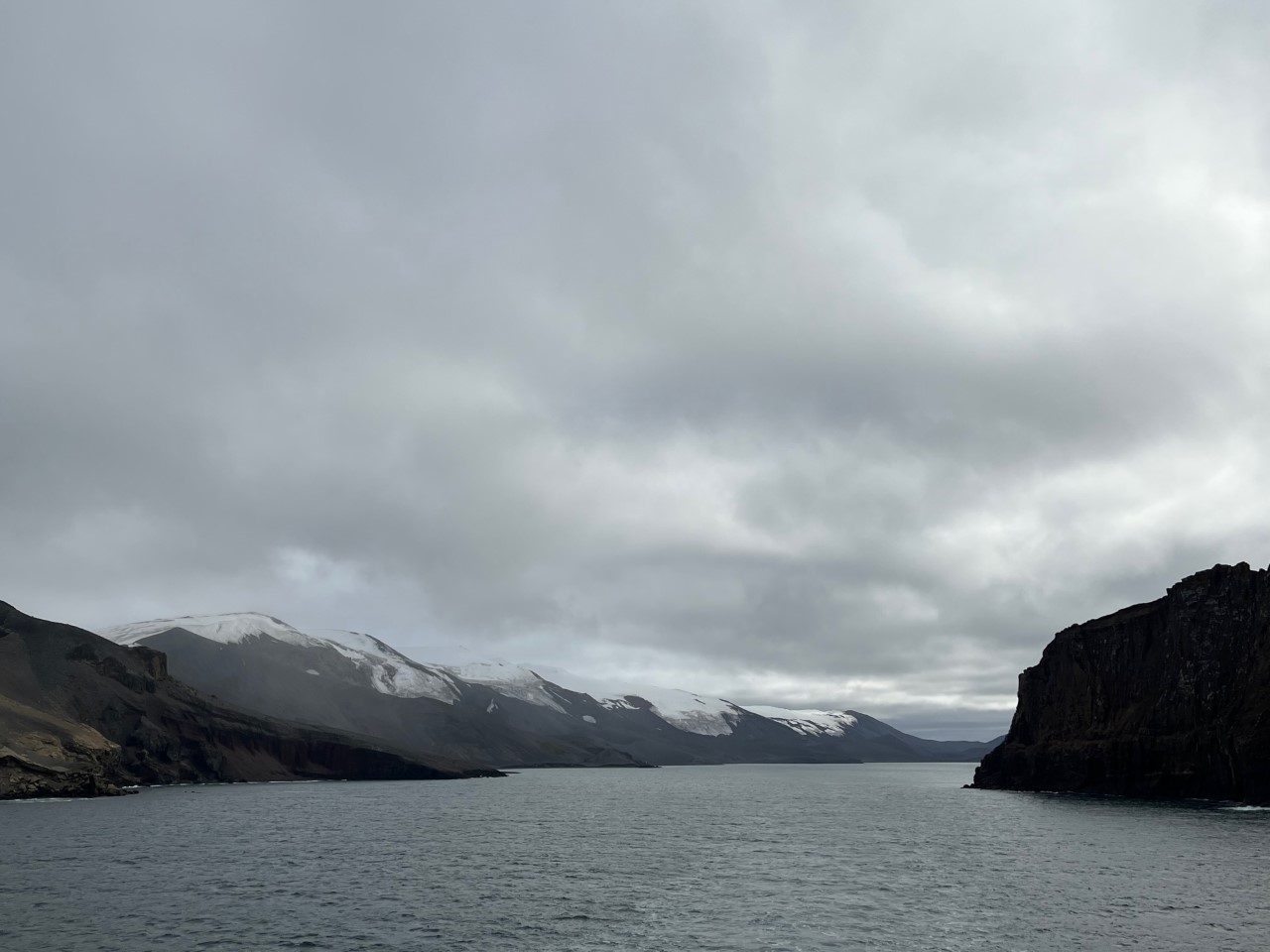 Some more reading (I’ll be finished with A Suitable Boy in no time!), and then dinner in the Fredheim. A fairly light dinner: a beer, three steamed buns, and a blueberry milkshake.  (BTW, I am getting emails from people worried about my diet. DO NOT WORRY!) 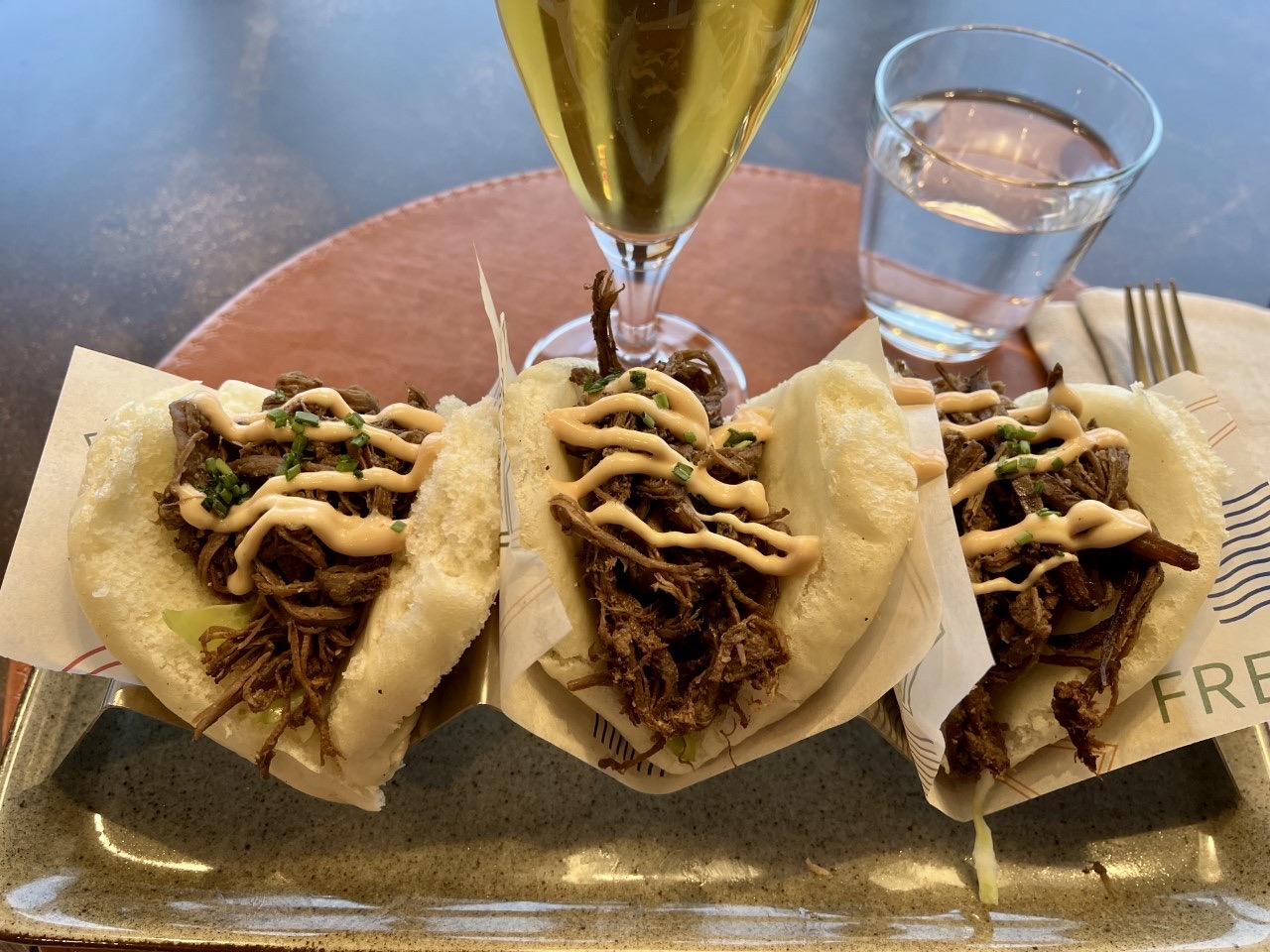 While I was consuming my shake and chatting with the waiter (a great guy named Emmanuel,), we saw a seal porpoise out of the water right in front of us—twice. What a treat! 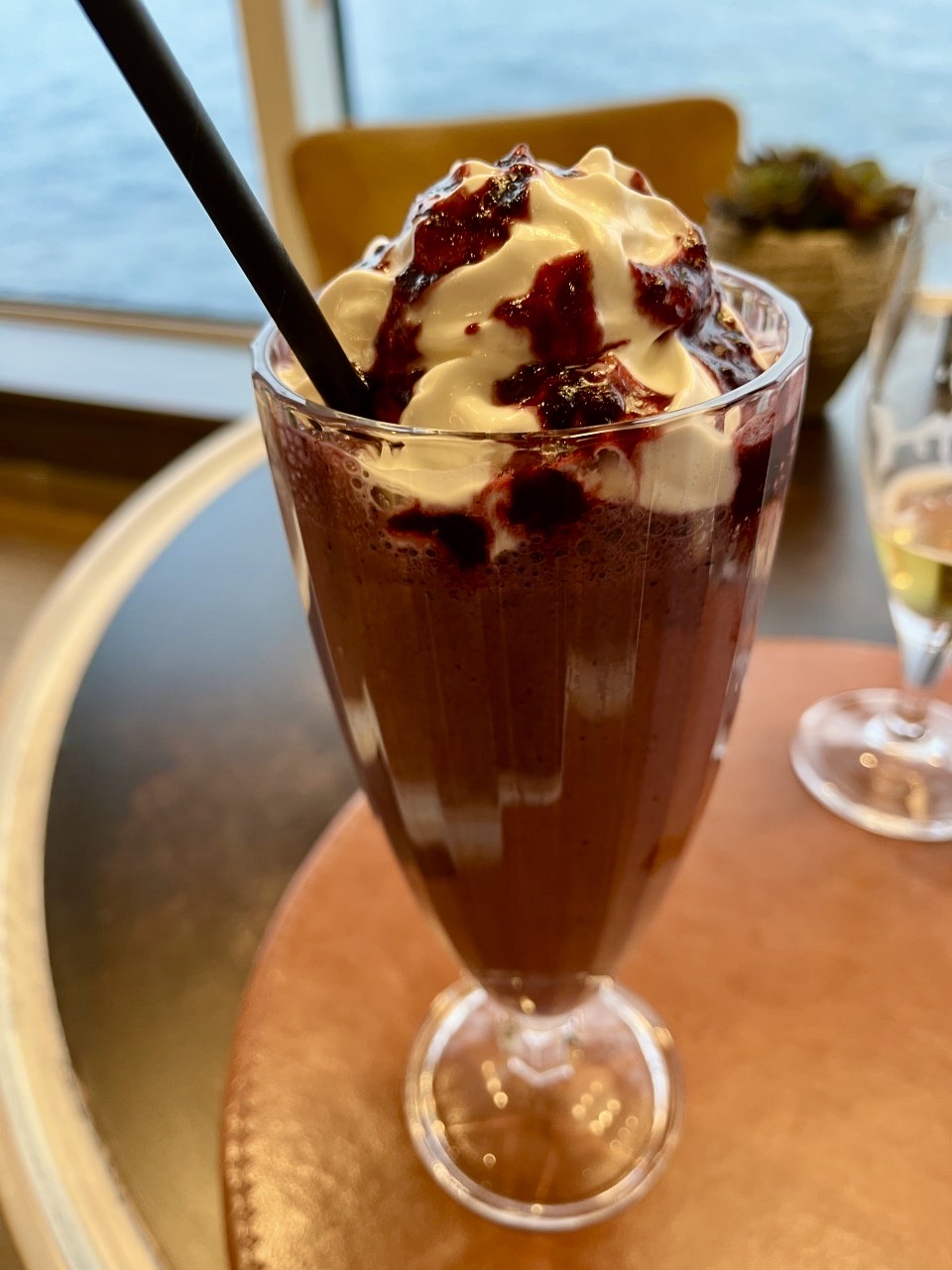