Here’s where the Roald Amundsen is (circled) this morning according to the ship’s map. We’re about halfway between the South Shetland Islands and the Falklands, and should arrive at the latter by night. I’ve even signed up for an optional, for-fee excursion to see King penguins, as they are not on the regular itinerary. This will be my only chance to see the closest species to an Emperor penguin. (Kings don’t live in Antarctica, and Emperors, found only in Antarctica, are usually inaccessible to travelers.) Kings are colored like Emperors, and are the second largest species of penguin in the world. 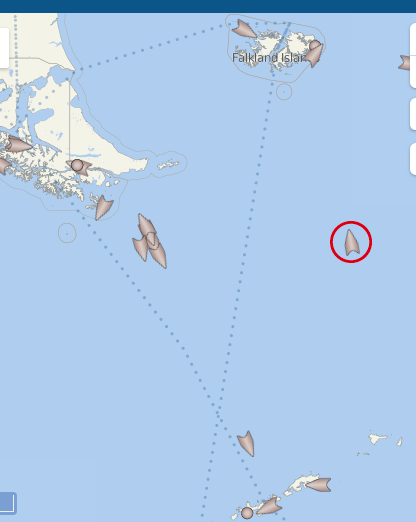 [Crowdsourced request to readers: I’m spending one night—the 28th of November—at Punta Arenas at the end of the voyage, as my flight leaves the afternoon of the 29th. Does anybody know a decent but inexpensive place to stay in that town?]

Its lovely and sunny this morning, and although we’re not formally in the Drake Passage, the waters are still unusually calm. Here’s the view at 8:00 a.m. from the ship’s Panomax cam (the sun is well up, so it was probably taken a while ago):

On to the report of Thursday’s activities. Tired from Thursday’s frigid but exhilarating excursion to the gentoo rookeries on Cuverville Island, I went to bed early that night—about 9:30 p.m. When I went to close the curtains (it’s still light at that time), I was unable to tear myself away from the view of icebergs passing by my window, all against a landscape of iceberg-colored sky and mountainous, snow-clad islands. 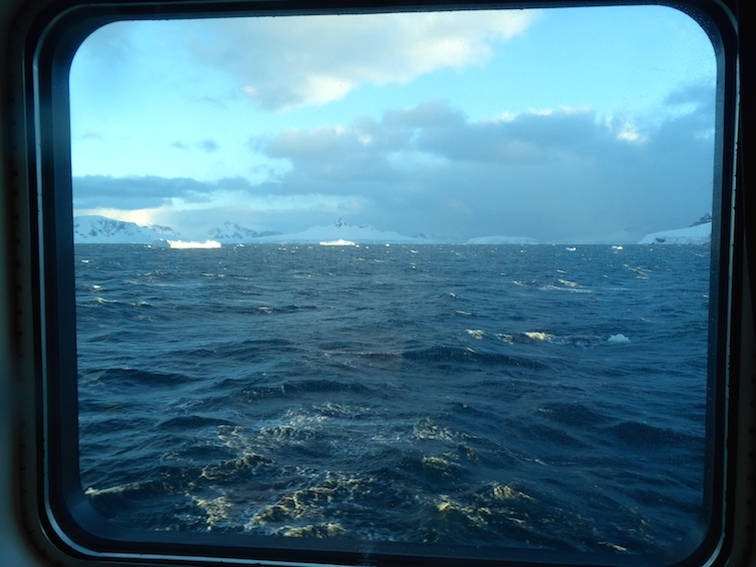 Our visit Thursday was to Deception Island, a popular tourist destination in the Antarctic, as it’s conveniently located in the north of the South Shetland Islands, has great views, and, most important, has a fully protected harbor and a convenient landing spot in Telefon Bay (below). It’s also an island formed by the caldera of a still-active volcano. 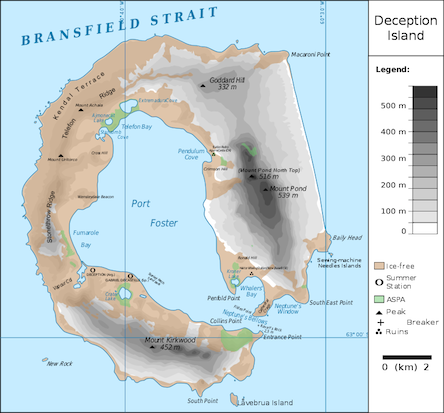 The British Antarctic Survey, which provided the picture below, says “it is one of the most visited places in Antarctica.” The entrance to the “donut hole” bay is through a strait called Neptune’s Bellows, which you can see in the map above and in the foreground below. That name comes from the strong gusts of wind funneled through the narrow channel.

There are penguins on the island, but the chinstrap colony is off limits. I did see a few desultory gentoo penguins hanging out near the landing site. One goes to Deception not for the penguins, but for the spectacular beauty.

A bit about the island from Wikipedia:

Deception Island is an island in the South Shetland Islands archipelago, with one of the safest harbours in Antarctica. This island is the caldera of an active volcano, which seriously damaged local scientific stations in 1967 and 1969. The island previously held a whaling station; it is now a tourist destination and scientific outpost, with Argentine and Spanish research bases. While various countries have asserted sovereignty, it is still administered under the Antarctic Treaty System.

The island is roughly circular with a diameter around 12 km (7.5 mi). A peak on the east side of the island, Mount Pond, has an elevation of 542 m (1,778 ft), and over half the island is covered by glaciers. The centre of the island is a caldera formed in a huge (VEI-6) eruption, which has been flooded by the sea to form a large bay, now called Port Foster, about 9 km (5.6 mi) long and 6 km (3.7 mi) wide. The bay has a narrow entrance, just 230 m (755 ft) wide, called Neptune’s Bellows. Adding to the hazard is Raven’s Rock, which lies 2.5 m (8.2 ft) below the water in the middle of the channel. Just inside Neptune’s Bellows lies the cove Whalers Bay, which is bordered by a large black sand beach.

. . . it was first visited and explored by the American sealer Nathaniel Palmer on the sloop Hero the following summer, on 15 November 1820. He remained for two days, exploring the central bay.

Palmer named it “Deception Island” on account of its outward deceptive appearance as a normal island, when the narrow entrance of Neptune’s Bellows revealed it rather to be a ring around a flooded caldera.

The Wikipedia article gives the history of the island, which started with extensive sealing and whaling  in the early 19th century based in the safe inner harbor where “processing stations” were erected. After factory ships were invented, allowing whales to be “rendered” anywhere, the harbor still became a convenient and quiet refuge for those ships, and for sealing ships as well.

After the fur seals were nearly driven to extinction and the last whaling operation went belly-up in 1931, the island was abandoned until the British and Chileans set up scientific stations. Those, however, were destroyed when the volcano erupted in 1967 and 1969, followed by an ashfall in 1970. There was even an airstrip, which we were told had a bend in it because of the island’s topography.

Below: the landing at Telefon Bay. The expedition team leaves nothing to chance, going ashore an our before we land to map out paths and land some equipment. You can see all the stuff hauled ashore before us: tents, sleeping bags, water, and food (in case ice forms and we’re marooned), as well as orange cones and flags to mark out permitted areas and hundreds of ski poles when there’s a climb.  There are no toilet facilities, for you’re not allowed to urinate or defecate on Antarctic land. It’s judicious to empty your bowels and bladder before you go ashore! 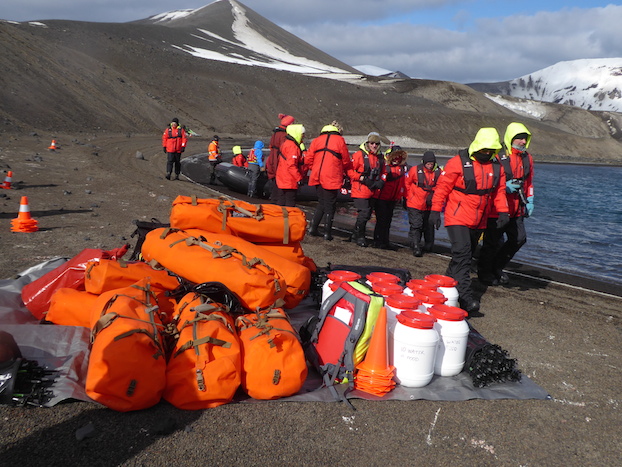 Below: the intrepid head of the expedition team on this trip: Steffen Biersack, who has extensive experience in the Antarctic (he used to be a policeman in Germany). Here’s Steffen directing boat traffic at the landing. Pulling the Zodiacs up to shore so we can disembark is one of the most onerous tasks of the expedition team, whose members sometimes have to go in and out of frigid, waist-deep water over a period of several hours. (They are well clad in thermal clothes and waders, but still . . . ) 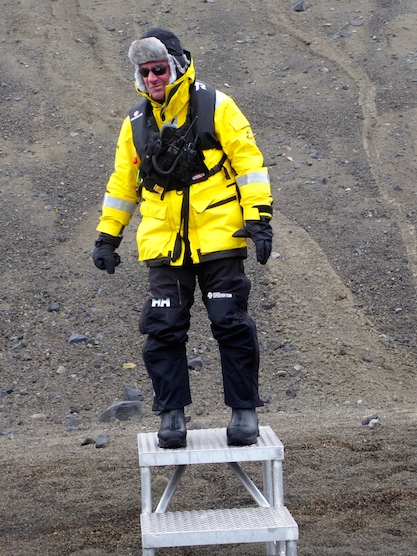 We immediately started climbing Telefon Ridge. Here’s a panoramic view from partway up the ridge, which rises above Telefon Bay to Goddard Hill (332m). Why the name? Wikipedia explains:

The name appears on the chart of the French Antarctic Expedition under Charcot, 1908–10, and derives from the ship SS Telefon, which sat here awaiting repairs.

The view during the hourlong climb is splendid, with volcanic cliffs, rocks, and tuff, topped at high altitudes with a snowy frosting. Inland there was a partly frozen light-green freshwater lake, once a source of water for whalers and sealers. 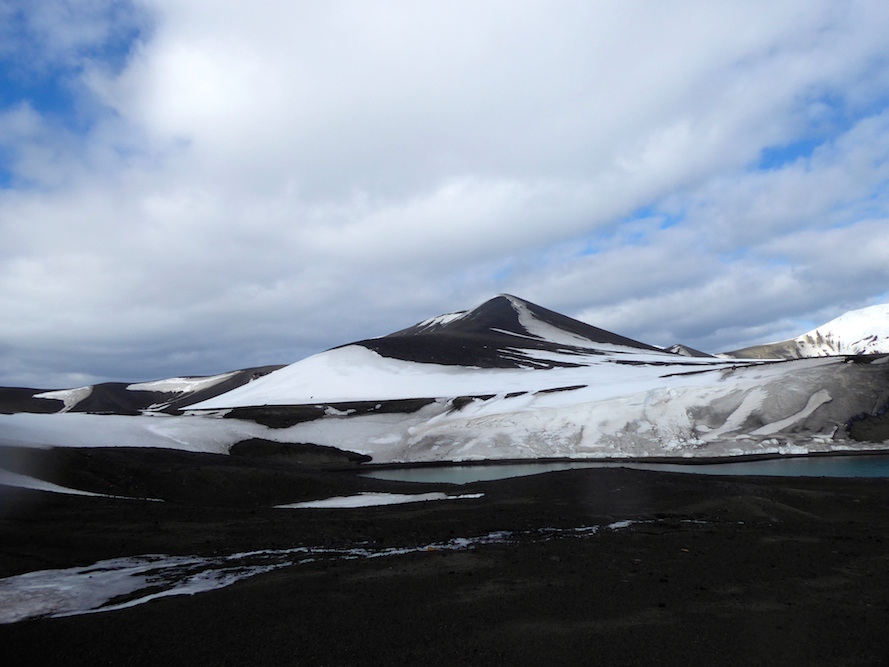 Our route went from the landing up to this ride near the peak. You can see the end of the road as very small specks on the ridge just to the right of the photo’s center. Those are people gathered at the terminus, taking photos. 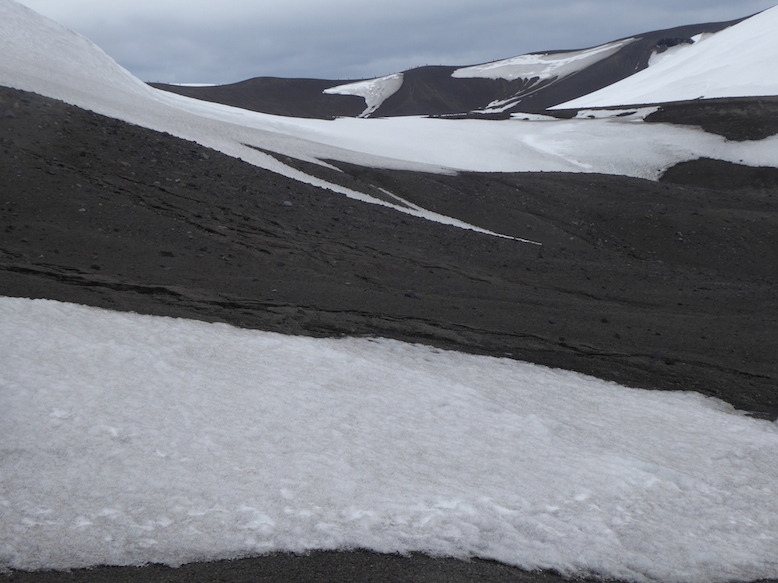 Climbing. The footing on the rocky volcanic soil was treacherous, as was the snow we crossed by climbing cut steps (another job of the expedition team). And the path goes along sheer cliffs to the left when ascending, as you can see here. Being a worrier, I did imaging the consequences of toppling into the sea far below. 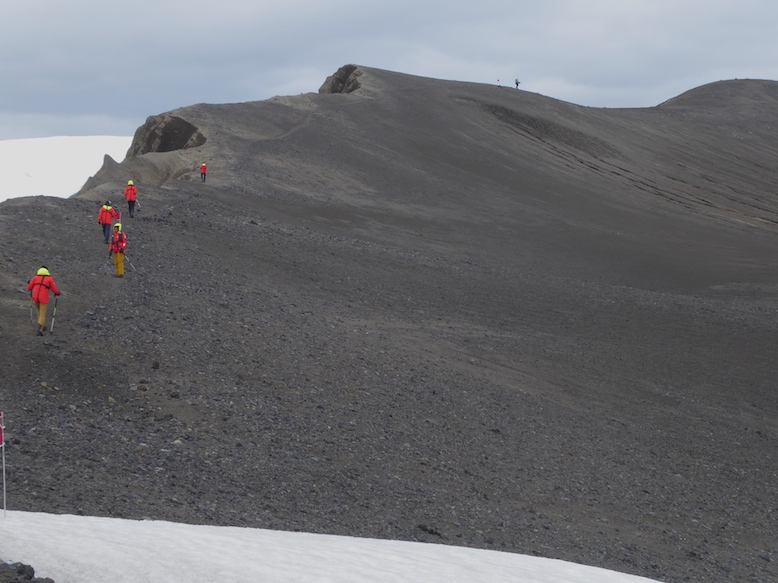 But you’re rewarded by splendid views along the way, like this:

And, at the top, you see the ship moored peacefully in the bay below: 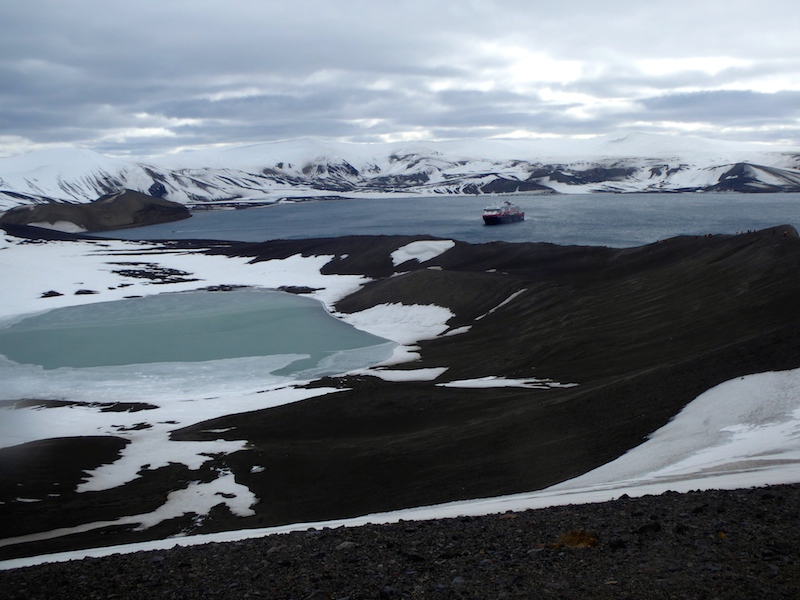 A panorama from the highest point we were allowed to attain:

My second “here I am!” photo on the trip (in my defense, the guide at the top offered to take it). The ship gives us our windbreakers to keep, my waterproof pants come as I’m a de facto member of the expedition team, and all passengers are required to wear rubber boots, which are disinfected by a small car-wash like brush as we re-board the ship. (I’m not sure why they’re not disinfected before we go ashore, too, as the object is to avoid introducing foreign organisms to Antarctica.) 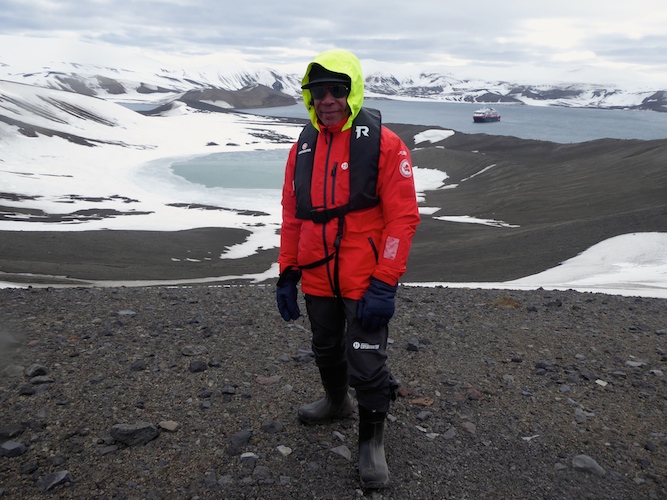 But this shot was my idea. Seeing the reflections in the guide’s goggles, I asked if I could take a selfie reflected in them. She said “sure,” and here’s the result (I’m in the center). I love the reflections of the mountains. 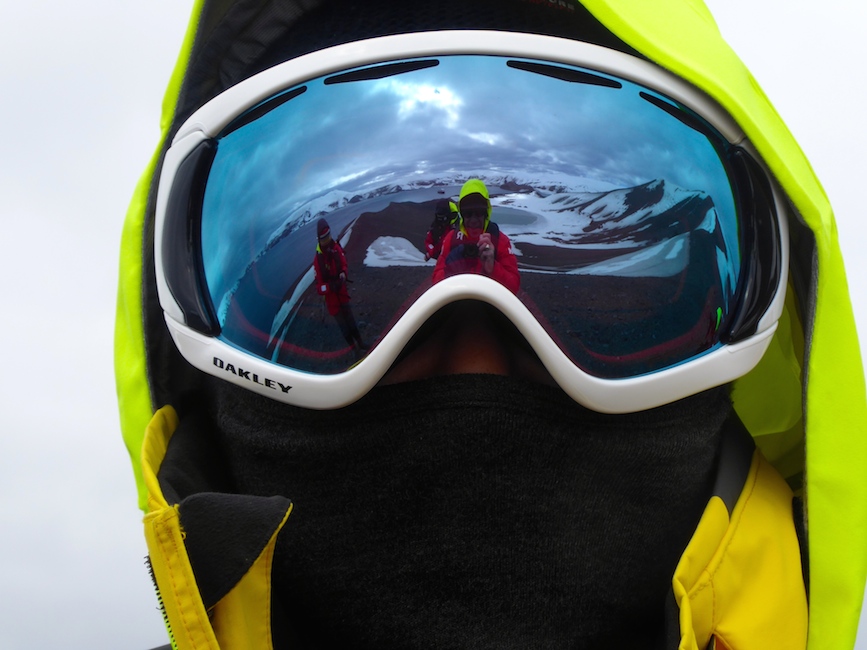 Two views of a South Polar skua (Stercorarius maccormicki) that plopped itself down right beside the trail. The guides quickly put “do not approach” flags around it so that it would remain undisturbed. This concern for the local wildlife is heartening. 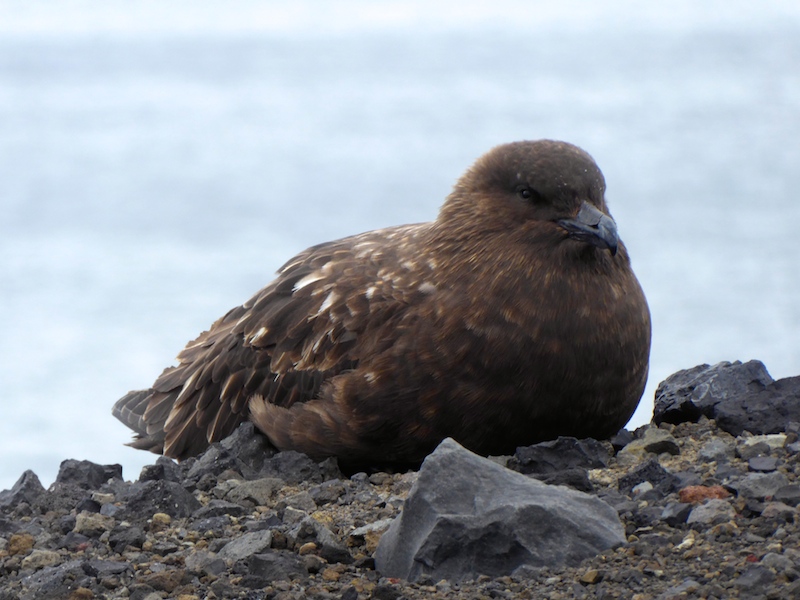 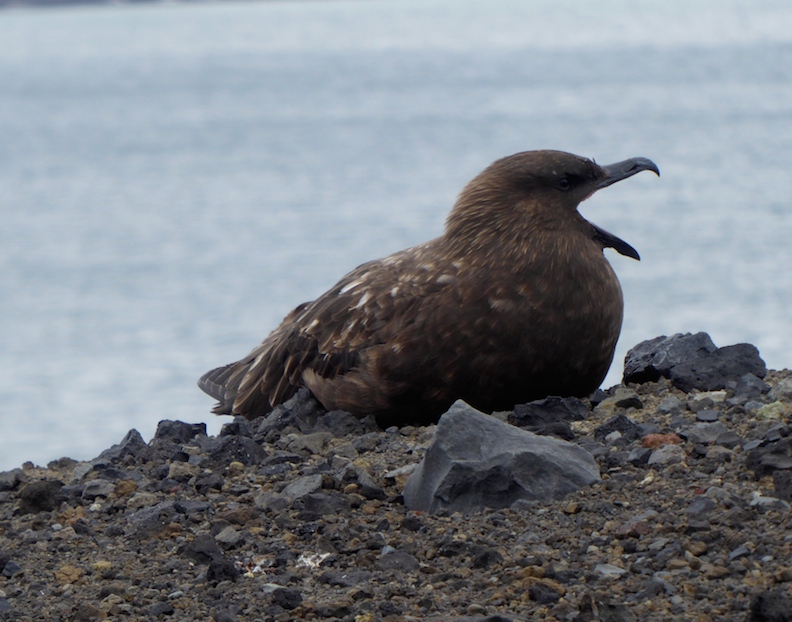 Now onto Neptune’s Bellows, the narrow entrance to the caldera. Here’s what it looked like in the morning when we sailed through the strait. There’s a submerged obstacle, Raven’s Rock, which, according to Wikipedia, “lies 2.5 m (8.2 ft) below the water in the middle of the channel.” I’m not sure how the ship manages to avoid it, though it can surely detect it with its sophisticated sonar. 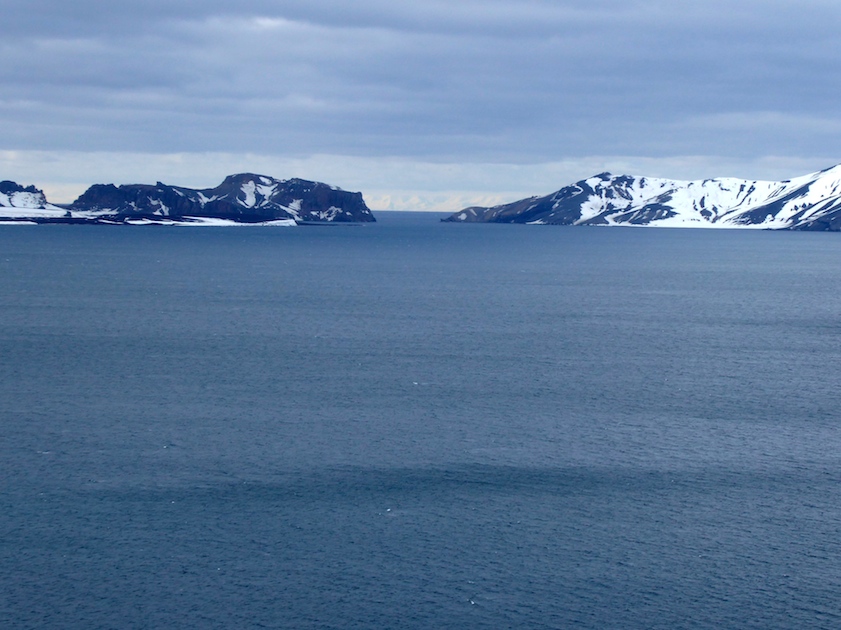 And a panorama of the harbor, showing Neptune’s Bellows in the middle of the photo. By the time of our exit in late afternoon, the weather had cleared up and become sunny. 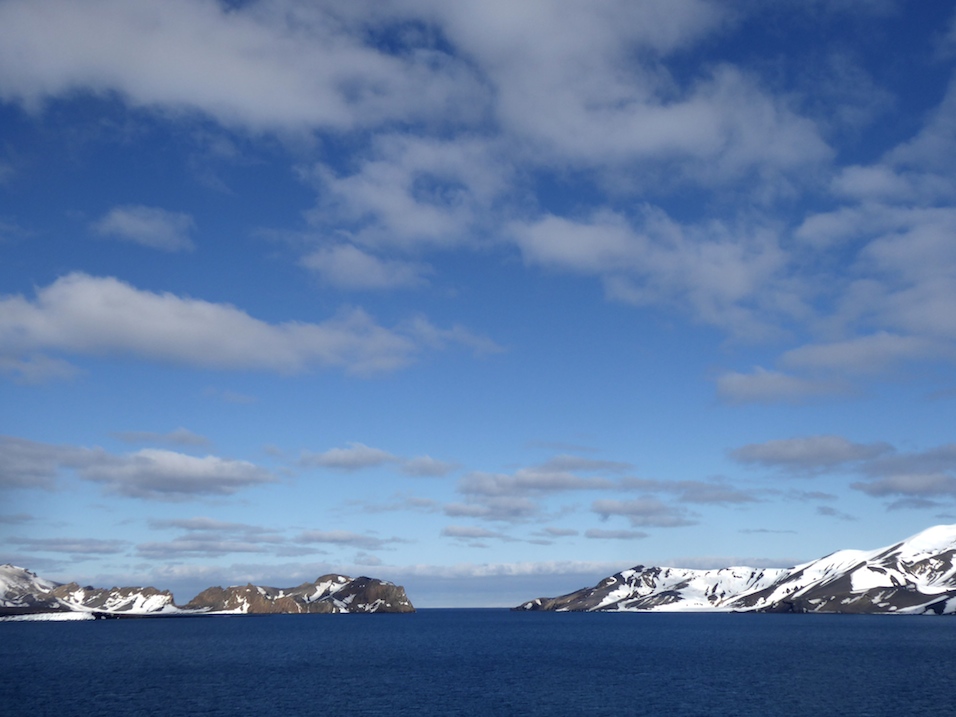 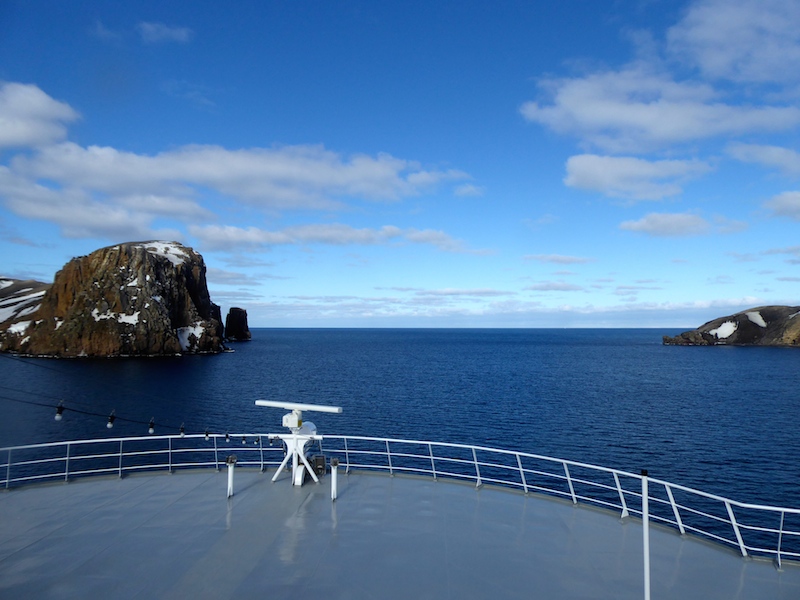 And we were out! Here’s a panorama taken shortly after our exit from the harbor:

The view of an island nearby. One must avoid becoming jaded at the constant sight of such splendor! 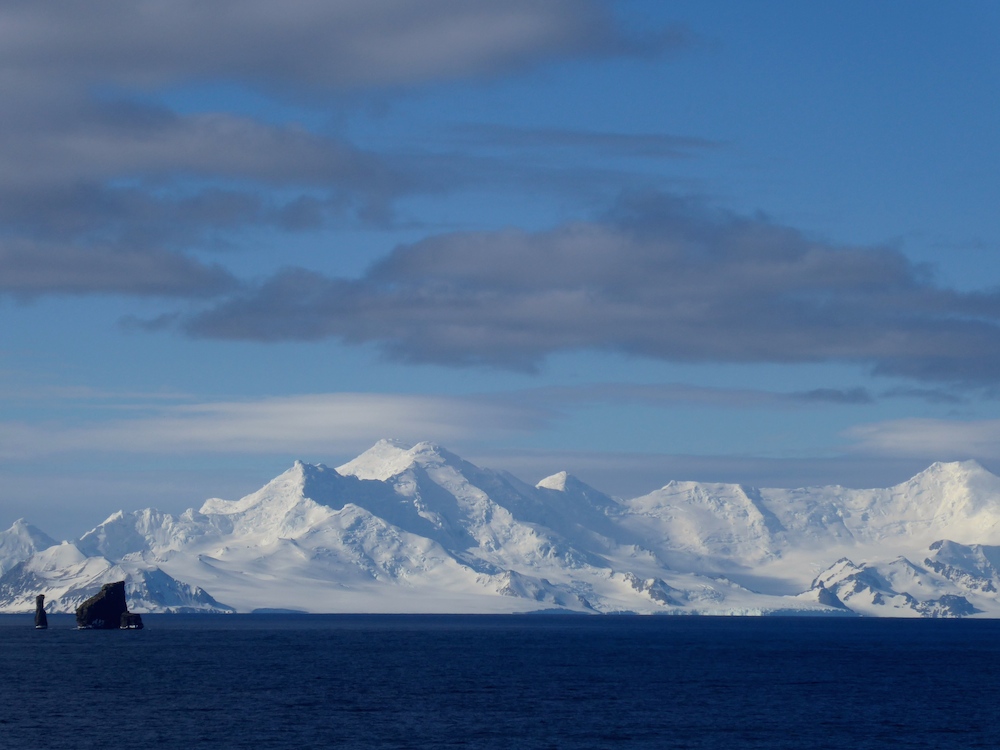 In the afternoon, the ship arranged for us to cruise to a nearby glacier; we were out for 45 minutes in fast-moving Zodiacs, and got really great views of the parent glacier and calved-off icebergs. (We also got a bit splashed with seawater, inevitable on such a trip. Keep your cameras covered!)

The blue color is fascinating—it also intrigued Darwin when he saw his first glacier in the Beagle Channel. 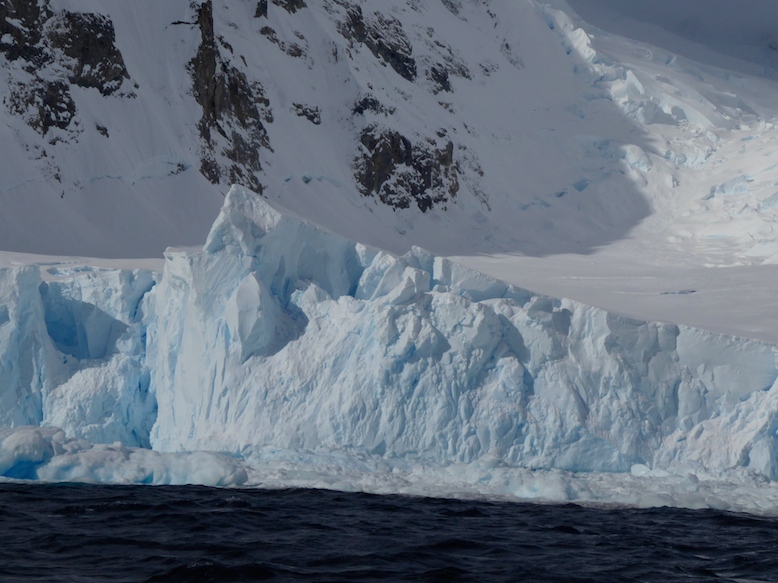 You can see “fault lines” along which the glacier can fracture as it moves toward the sea, calving bergs big and small. 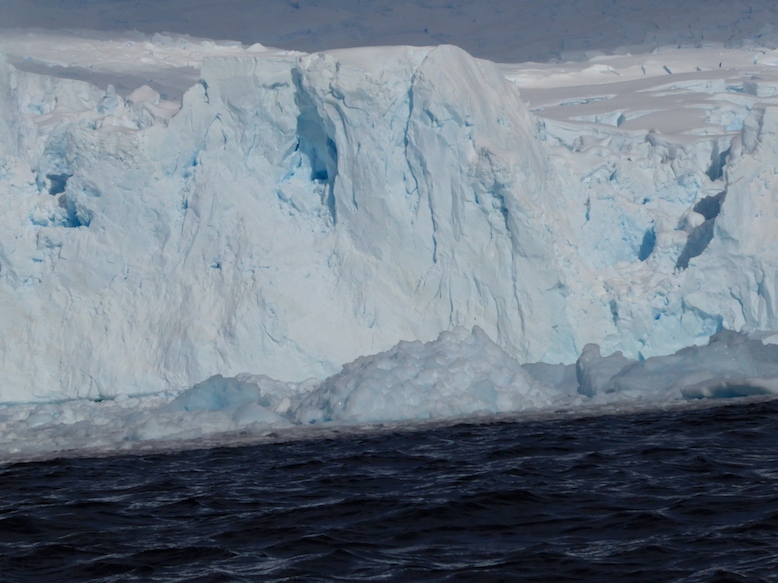 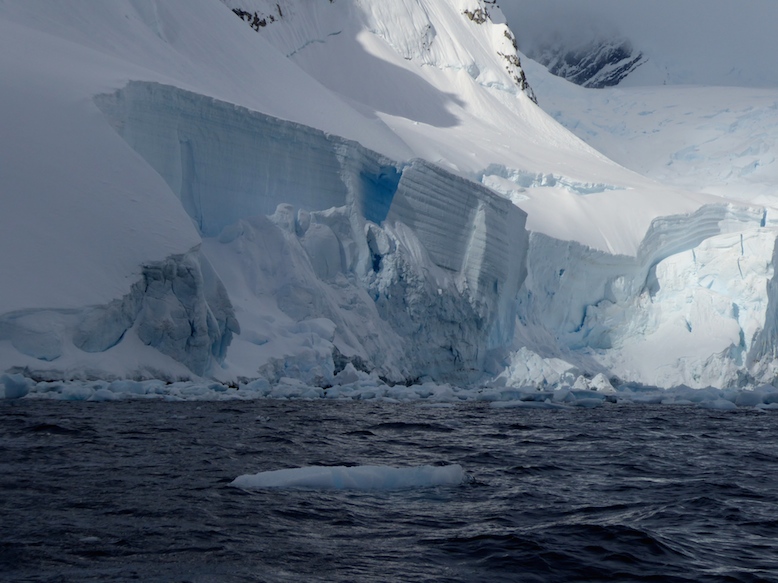 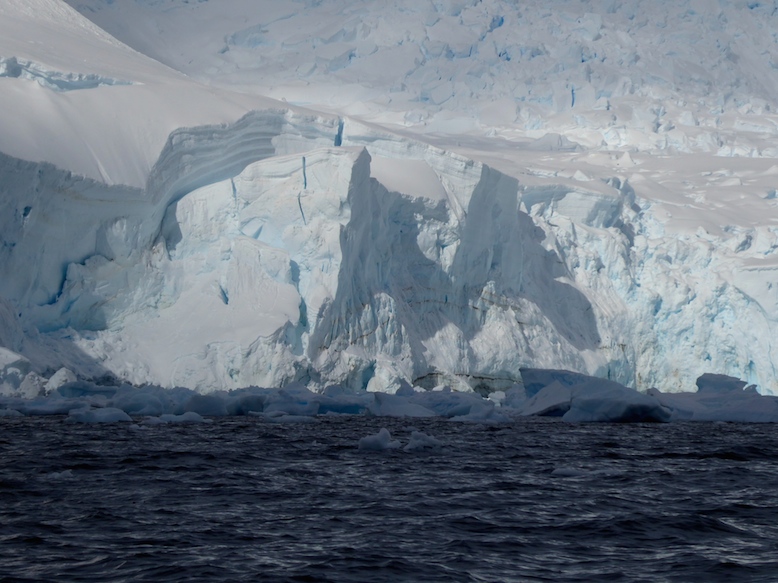 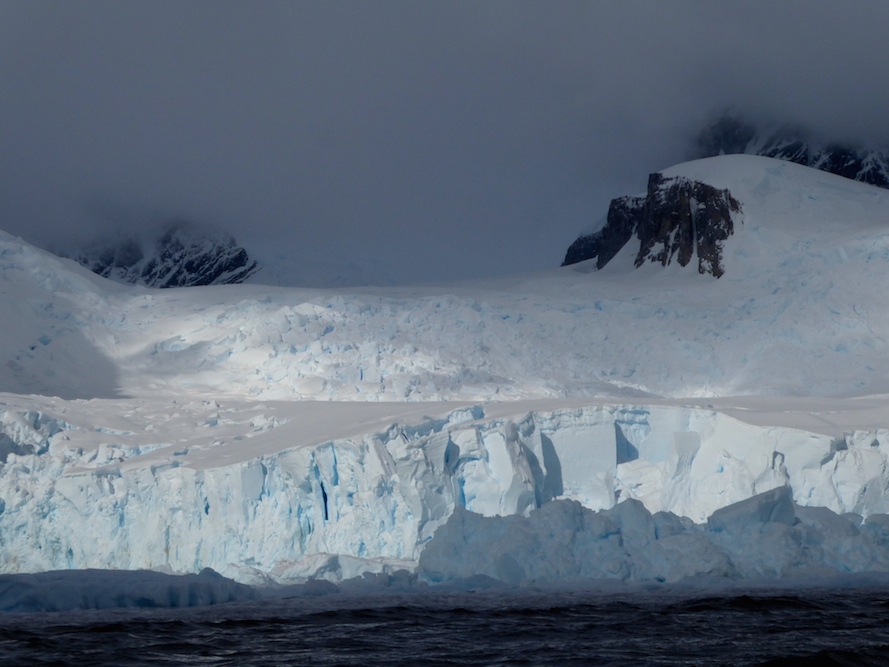 Here are huge icebergs floating near the base of the glaciers. Some were monstrous: the size of the one that sank the Titanic: 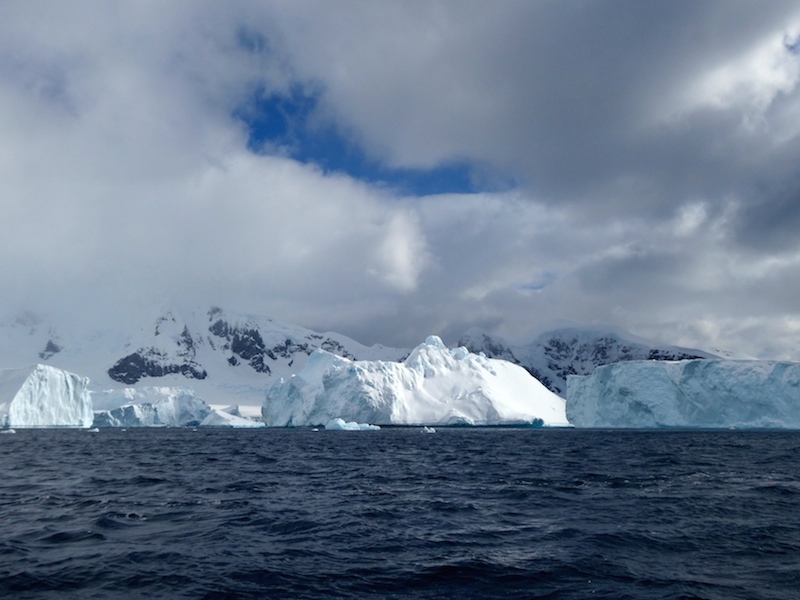 Look at this whopper! 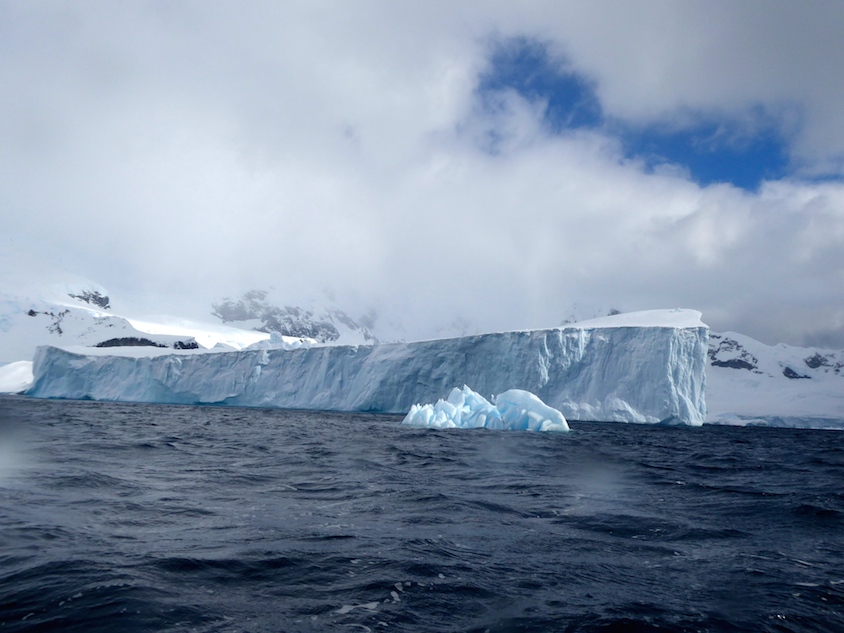 Finally, a photo of our Zodiac driver. They have to be extensively trained to control these unruly boats, for a slipup endangers the safety of their passengers. I have not seen any of them make a mistake. 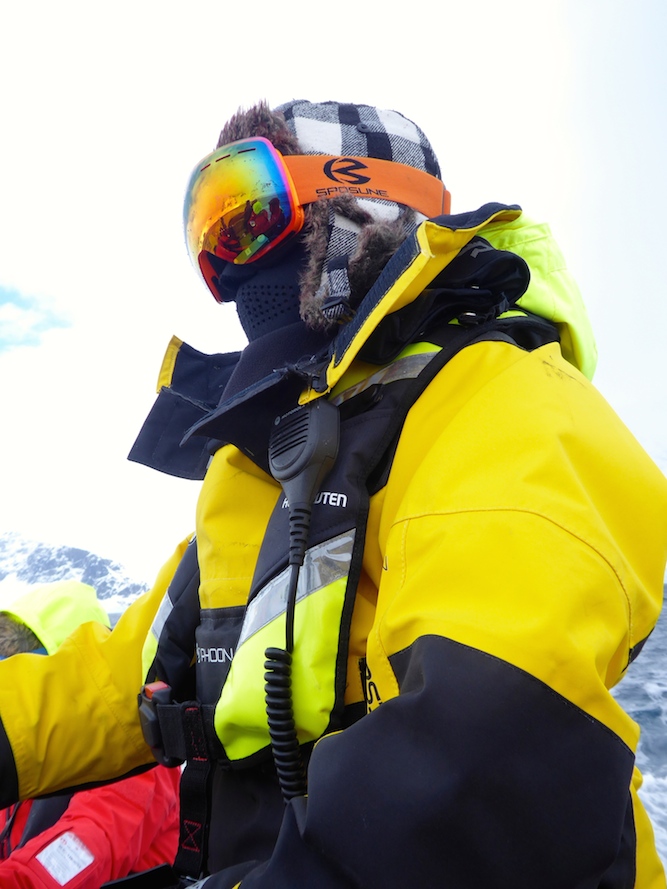 And so we sailed away, intending to arrive on Friday at, but not land on, Elephant Island. If you’re a polar-phile, you’ll recognize that site as an important one on the ill-fated Imperial Trans-Antarctic Expedition of 1914-1917. The expedition aimed to cross the continent on foot, but was ended before it began when commander Ernest Shackleton’s ship Endurance was trapped in and then crushed by pack ice.

Taking what equipment they could, Shackleton and his 27 men hauled up on Elephant Island after floating dangerously atop the shifting pack ice. And it was from this island that Shackleton and 5 men then took off in a lifeboat, hoping to find rescuers at South Georgia Island, 800 miles away. They were successful, found a rescue tugboat in Punta Arenas, Chile, and all 28 men survived. But more on that tomorrow.