Well, the mass PCR testing of all crew and passengers yesterday turned up at least one case of covid-19 infection, which is a huge deal for our ship. It was a passenger, not crew, and since all PAX were PCR tested the day they flew to Punta Arenas to board the ship, this person must have had the virus but not yet developed enough of it to get into the nasal passages.

The infection means that we are no longer a “green ship” but a “red ship”. We have the plague! That means that there will be no lessening of social distancing (i.e., no live audience during lecturing), the spas and gym will be closed (no harm to me there), as will the public bathrooms, and, worst of all, we can’t visit the Falklands, as they won’t accept a ship with Covid on board. That bums me out because I so liked the place—especially the long hikes to the penguin rookeries, the black-browed albatross colony, and the trip to see the king penguins. I will see no large penguins with orange coloration on this trip.

This means that the expedition leader has to find something else for us to do during those extra three or four days, and I’m not sure what that would be. One of my friends aboard, a scientist down here to monitor algae on the snow, says that perhaps they’ll take us around to the east side of the Antarctic peninsula, where I’ve never been. I suppose I can look forward to new places if they come up with some good destinations. In fact, we’re going to one this afternoon (see below):

Where we are: We have left the South Shetland Islands and are now cruising along the Antarctic Peninsula, which I can see out my port cabin window. As I said, the covid case has forced the Expedition Leader (“Tomski”) to confect a new plan to use up the three days that we’d normally spend in the Falklands. Today we’re scheduled to visit Almirante Brown Base, or simply Brown Base, an Argentine naval station that was recently closed. It has penguins—gentoos, which our team leader called “the cockroaches of the Antarctic” because they’re so numerous and because they displace other species of penguins.

Our location and trail over the last few day. As you see, we visited the South Shetlands and are now of the Antarctic Peninsula. 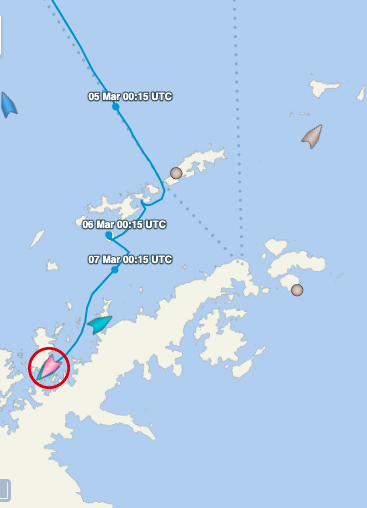 We are at 64.5° south latitude, and we’re told that on this trip we won’t cross the Antarctic Circle, which lies at 66.3° south. 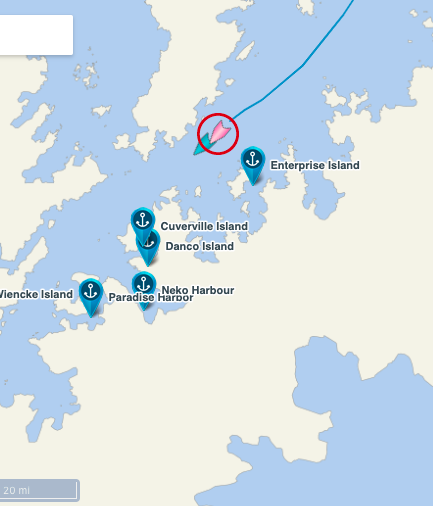 The view from my balcony at 6:20 a.m.  Antarctica! A large iceberg went by a few minutes ago. 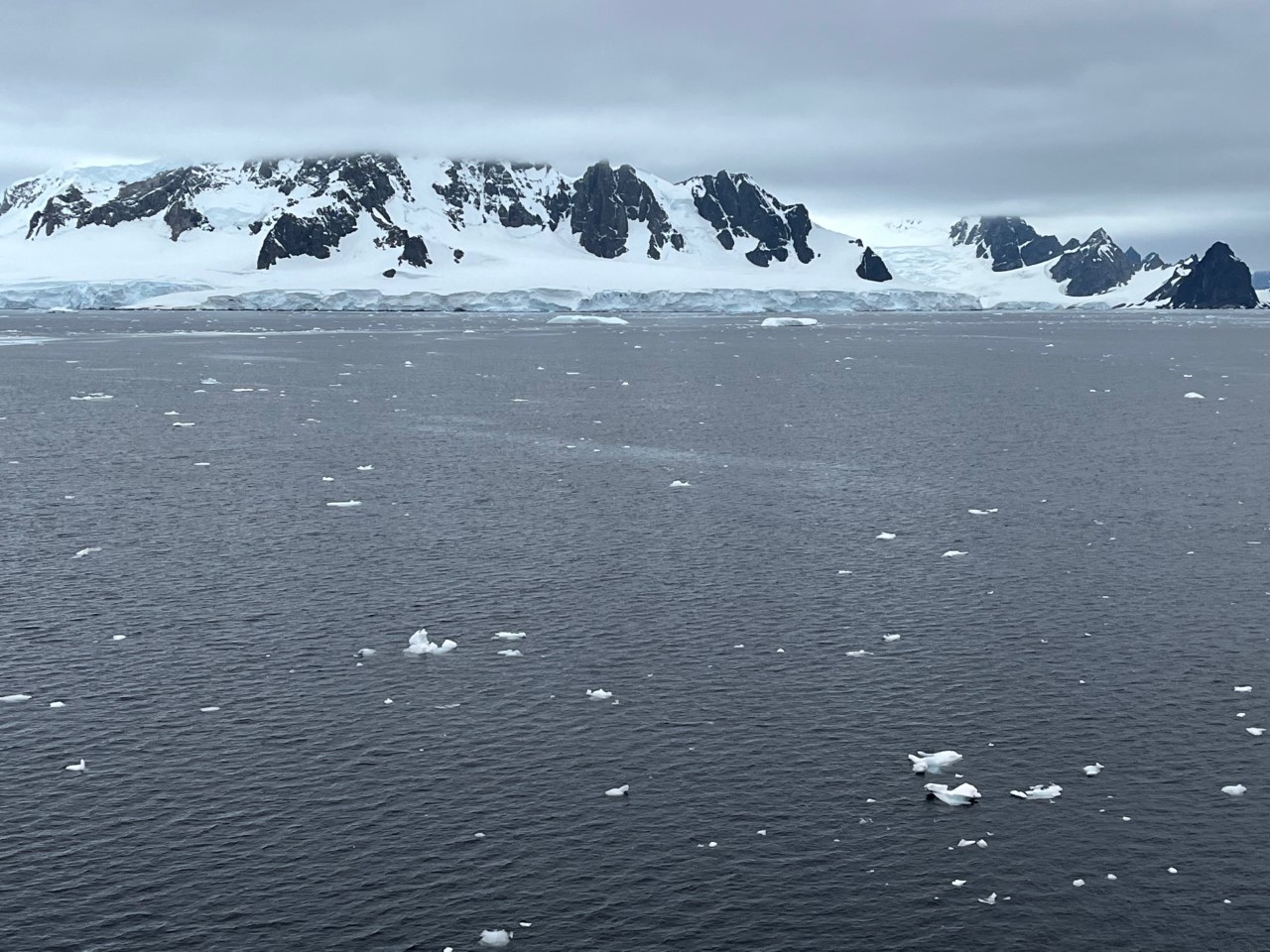 And a sea mammal surfaced twice; I have no idea whether it’s a seal, a fin whale, or what: 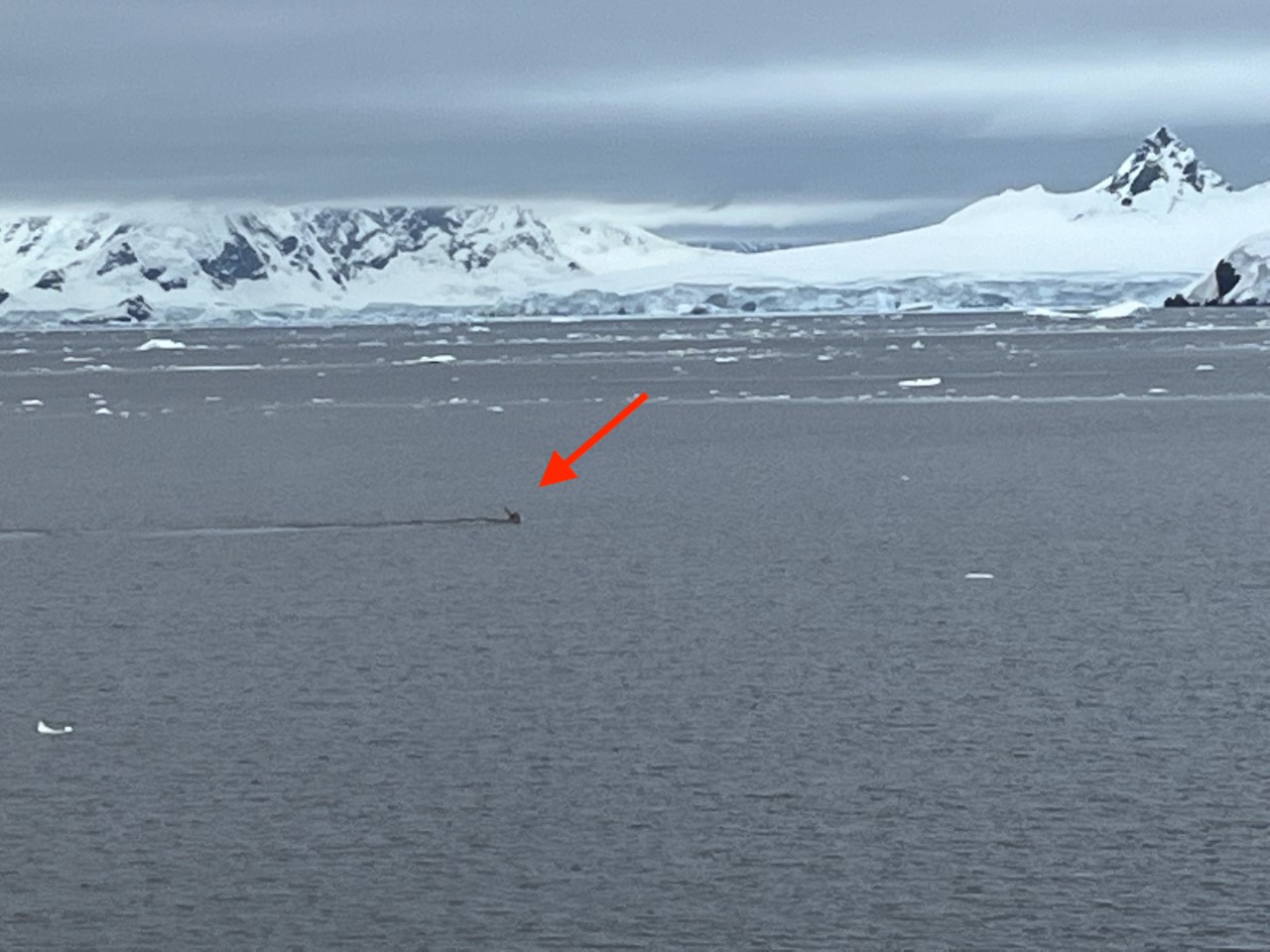 Our goal: Brown Station in Paradise Harbor (photo from Wikipedia) 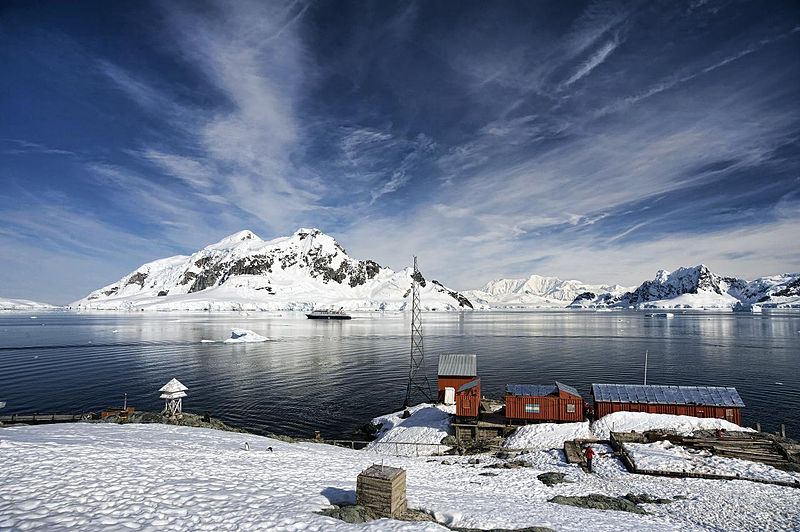 Thanks to its location on the Antarctica continent along the beautiful Paradise Harbor and to its relatively mild weather, Brown Station is a popular excursion destination for tourist expedition ships visiting Antarctica. In addition to visiting gentoo penguins, tourists may climb to a viewpoint 84 m (276 ft) above the station. Rather than walking down the steep slope, many visitors use the human bobsled course. All those visitors sledding downhill have created a ditch a few feet deep that makes for excellent sledding.

The course; hiking up on the left and sliding down on the right. You don’t use sleds; you slide down on your butt. It should be fun, but of course my main interest is penguins. 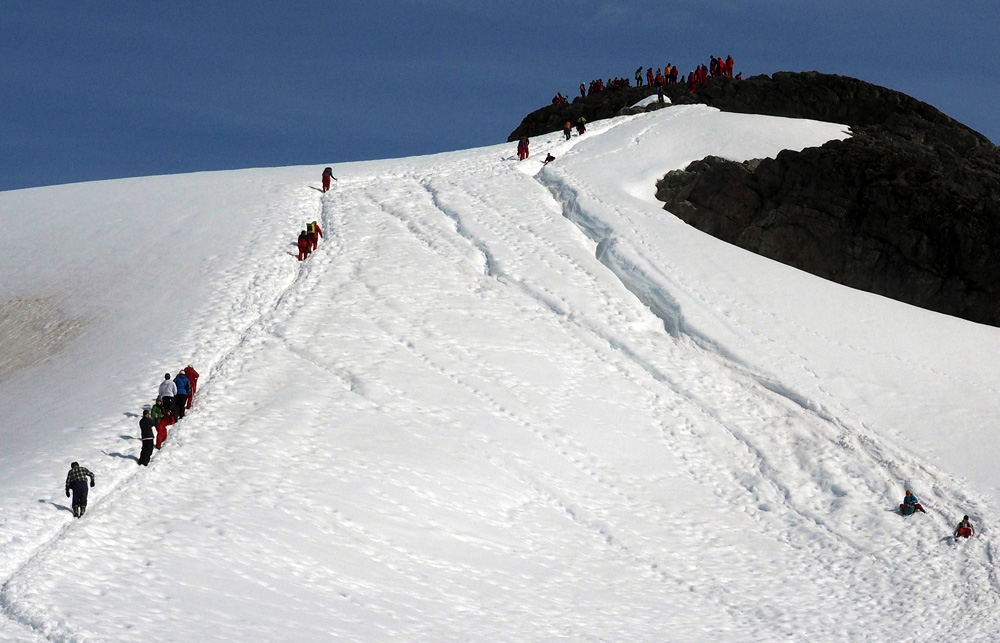 So, good morning on a cold (0°C) Antarctic morning: Monday, March 7, 2022: National Cereal Day. I had oatmeal instead, and it’s marvelous to have a leisurely breakfast as the landscape and icebergs go by. That’s the daily schedule by my plate; I prefer the printed one, which you can pick up on your way to breakfast, than the electronic one. 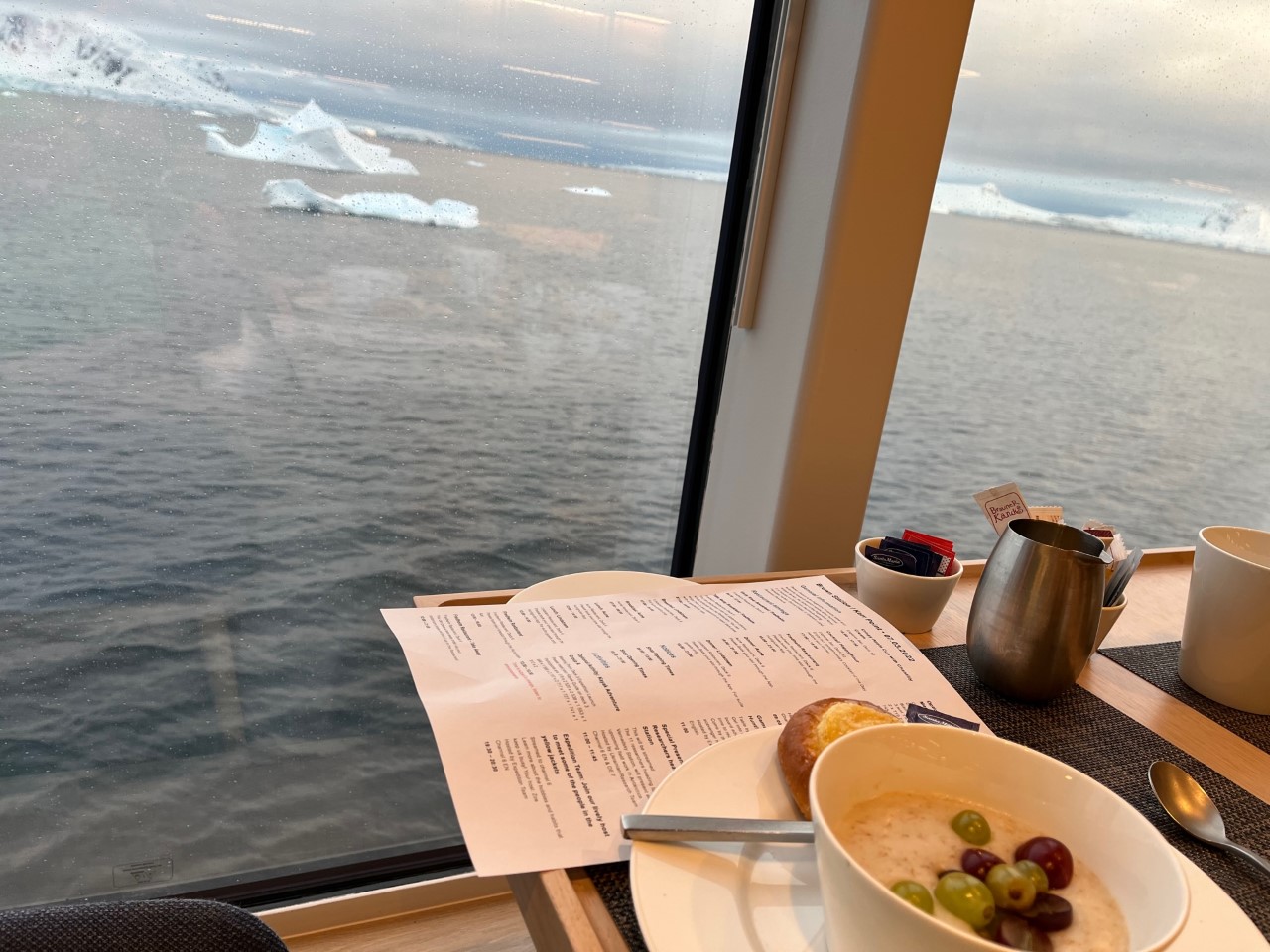 The news from Ukraine gets worse: This NYT headline shows how insanely bellicose Putin is (click on screenshot to read):

So we’re avoiding military conflict but trying to deter Putin by peaceful means, and yet the autocratic loon says that those sanctions are still equivalent to a “declaration of war.” What he apparently wants is to take over whatever territory he fancies, and nobody can stop him, whether by fighting or by sanctions, without his regarding it as a “declaration of war.” The man is spoiling for totalier Krieg, I tell you.

President Vladimir V. Putin warned on Saturday that crippling economic sanctions imposed by the West were “akin to a declaration of war,” as the Russian military pummeled civilian targets and continued shelling near the first protected routes intended to allow besieged Ukrainians to flee, apparently violating a cease-fire that had been agreed to only hours earlier.

In the meantime, here’s a picture from the NYT not of collateral damage, but deliberate targeting, or so it says (caption from the NYT). Read more about this incident here, and be aware that there’s a graphic video:

Firing on evacuees is of course a war crime. There are more than a few of us, I think, who have dreams of Putin in the dock in the Hague. But of course he’d never set foot out of Russia to allow that to happen.

The antiwar protests in Russia continue: the BBC News aboard just informed us that 4,300 protesters were arrested across Russia yesterday. They’re very brave, as they face long prison sentences for doing this. More and more—what with the bellicosity, the elimination of freedom of the press, the suppression of protests, and the insanity of the leader—the Russian administration is coming to resemble that of Nazi Germany.

I wonder if the humor and cleverness of the Ukrainians are promoted by the traits of Zelensky, a former comedian. Matthew sent this:

Straight on: fuck off
Left: fuck off again
Right: fuck off to Russia pic.twitter.com/2c1dzKxno9

*An article to read: an op-ed in the NYT by Emma Camp, a senior at the University of Virginia: “I came to college eager to debate. I found self-censorship instead.”

I went to college to learn from my professors and peers. I welcomed an environment that champions intellectual diversity and rigorous disagreement. Instead, my college experience has been defined by strict ideological conformity. Students of all political persuasions hold back — in class discussions, in friendly conversations, on social media — from saying what we really think. Even as a liberal who has attended abortion rights protests and written about standing up to racism, I sometimes feel afraid to fully speak my mind.

In the classroom, backlash for unpopular opinions is so commonplace that many students have stopped voicing them, sometimes fearing lower grades if they don’t censor themselves. According to a 2021 survey administered by College Pulse of over 37,000 students at 159 colleges, 80 percent of students self-censor at least some of the time. Forty-eight percent of undergraduate students described themselves as “somewhat uncomfortable” or “very uncomfortable” with expressing their views on a controversial topic during classroom discussions. At U.V.A., 57 percent of those surveyed feel that way.

This is precisely why departments and official units of colleges and universities should not make any official or quasi-official statements about politics, ideology, or morality. It chills speech. And that is why the University of Chicago abides by The Kalven Report—at least it’s supposed to, but even some of our departments can’t resist making Wokeish statements to signal their virtue. But I’d object just as strongly if they made right-wing statements. Departments and universities should just shut up about those issues, or they’ll breed a generation of speech-wary students—as they already have.

If you wish to contribute notable events, births, or deaths that happened on this day, please go to the Wikipedia page for March 7 and, if you find something interesting, please put it in the comments.

Meanwhile in Dobrzyn, Hili saw a bird catch a mouse in the garden:

Hili: This bird has stolen my mouse.
A: What do you mean ‘your mouse’?
Hili: All mice in our garden are mine. 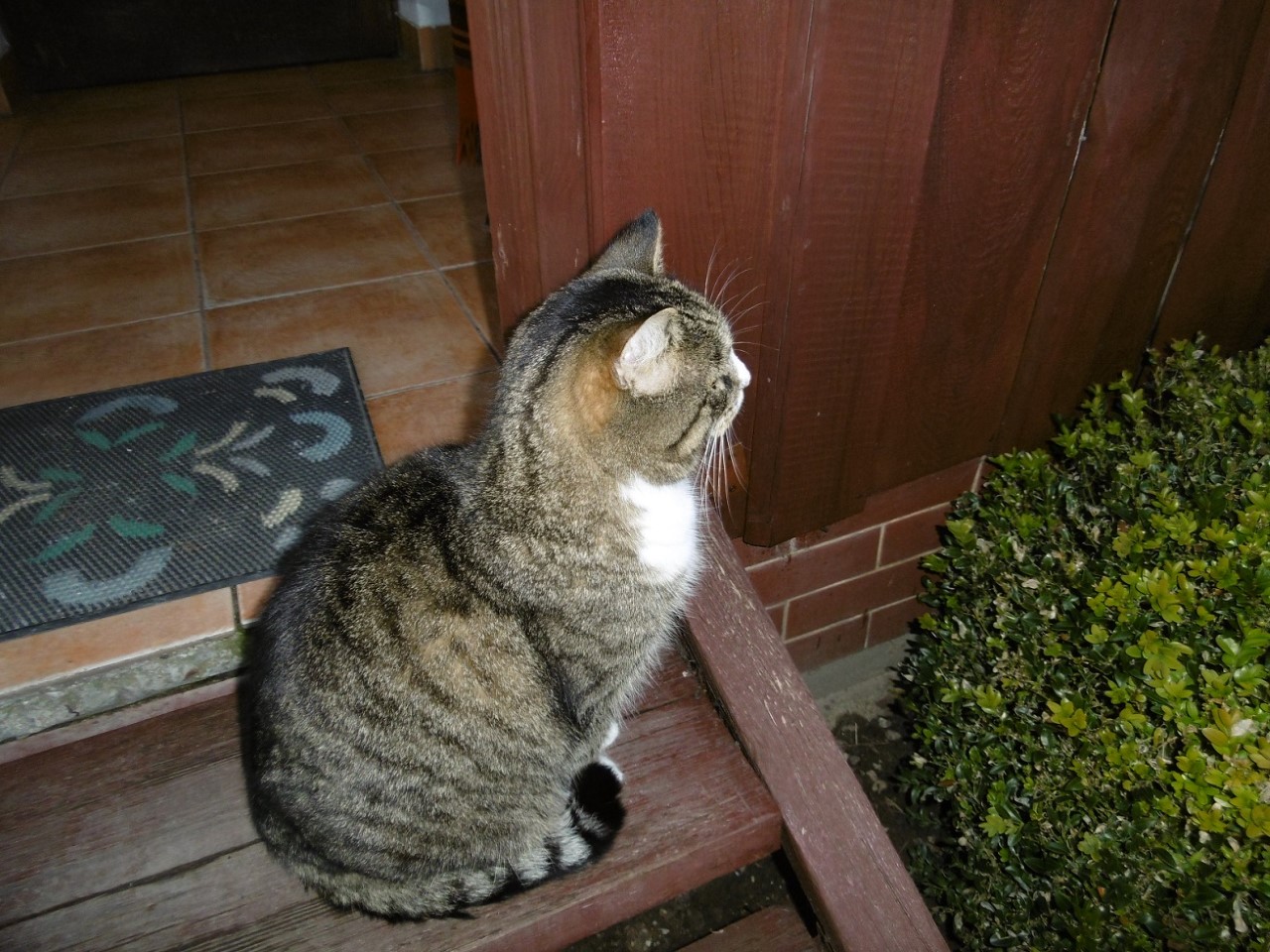 And Szaron looking out the window: 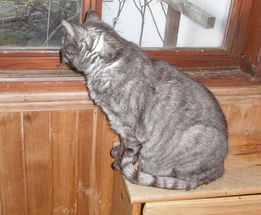 From Masih. No wonder Putin’s always talking to someone thirty feet away at the other end of a table!

Putin is afraid of his own people…
Remember when Khamenei was so afraid of death from coronavirus which he claimed it was a conspiracy created by the US. pic.twitter.com/hcQHPhVrTe

From Ginger K.: This kid is not only adorable, but fiendishly clever!

11yo put on a blazer & gave us a presentation on why we should get a guinea pig, complete with apple slides, cute pics, & video. My favorite moment was when husband raised his hand & she said, "I'm going to hold all questions until the end of the presentation."

Tweets from Matthew. His interpretation of this salticid (jumping spider) courtship:

Yes two males, then the female turns up and one of the male slopes off (probably sensible, she looks hungry)

This kind of thing has been going on for hundreds of millions of years and will carry on long after we are gone. https://t.co/VvwVTCchGg

Stalin appears to Putin in a dream.

"Sanctions are biting Russians hard," asks Putin, "what can I do to prevail?"

Stalin: Execute half of your population and paint the Kremlin blue."

"I knew you wouldn't object to the first part," says Stalin.

They are so hopeful, but, I fear, so doomed:

So many “good morning” greetings from Ukraine!

For a short moment, it’s hard to tell that this is a city about to face attack.

Have a look at the tweet below and see what you make of it.

Zelensky has responded to this publicity stunt by putin in a hilarious way 🤣 pic.twitter.com/eGh6nQQcPP

Ah, Putin gave a 2 hour rant to a group of bemused trainee air hostesses (they won’t be busy for a while…). The Twitter version of his video was compressed, and that often produces glitches. In this case, it looked like Putin’s hand was passing through the microphone, which led to a lot of excited chatter about the vid being faked (it isn’t). Zelensky, being a clever comedian, took the piss.

Here’s the vid – the faces on the poor women, trapped with him. He just rambled, no one ate anything (mind you, would you?!)

More on the microphone stuff from Matthew:

Putin was using a green screen in that meeting with the air hostesses pic.twitter.com/MXjytjS53i

Getting ready for the famous Abbey Road shot. Paul hasn’t yet taken off his sandals:

I understand that giant anteaters (Myrmecophaga tridactyla) enjoy their baths, and can even swim across wide rivers:

Week-end is near! Have any plan?
In the Pantanal, Giant anteater's pool parties are legendary! 🤘🛀🕶️#GiantAnteater #Wildlife #Pantanal #Biodiversidade pic.twitter.com/j7UzNtTcy0