I’m not sure why the NYT hired Anglican priest Tish Harrison Warren to write a weekly column about her Christian beliefs in the Paper of Record, but it’s annoying. You don’t see a weekly column about humanism, or even a weekly personal musing about science, which at least has the benefit of being true. What’s clear is that the paper has some reason for this palaver: probably to cater to the spiritual feelings of its liberal readers.

But what’s also clear is that Warren is very careful to stay away from tendentious preaching and any form of Biblical literalism, though she does believe in Jesus and, I believe, the Resurrection. The Times readers like their religion to be more on the personal and spiritual side, especially with a patina of sophistication.

As a result, Warren, despite her inability to produce stirring or even well-above-average prose, has been called by Religion News “a rising star in Christian spiritual writing” for her “willingness to merge personal vulnerability with deep theological reflection”. Well, yes, the personal vulnerability is on tap, as it is in this week’s column about sin (see below), but the theological reflection isn’t deep. It’s superficial. I would much rather read about someone’s personal reactions to specific events than to the fairy tales that constitute Christianity. But somehow superficial thought and mediocre writing can be excused if it’s about religion.

I can summarize Harrison’s thesis in two sentences (my words)

None of us is perfect; we all screw up, make messes in our lives, and hurt other people.  But the good news this Lenten season is that we can, just by recognizing our sinfulness and asking for forgiveness, we can be released by God from self-flagellation.

She does throw in the “personal” vulnerability to show how she too is a sinner (all indentations below save one are Warren’s prose):

In college, through a string of failed relationships and theological questioning, I came to understand sin as something more fundamental than rule breaking, more subtle and “under the hood” of my consciousness. It was the ways I would casually manipulate people to get my way. It was a hidden but obnoxious need for approval. It was that part of me that could not rejoice in a friend’s big award or accomplishment, even as some other part told her, “Congratulations!”

This could be said of most of us, so there’s no real insight into human psychology here. Where the religion comes in is her theological doctrine that we are all BORN as sinners (my emphasis):

This is the first Sunday of Lent, a season in preparation for Easter when Christians often focus on sin and repentance. One of the things that’s most difficult to swallow about Christianity is the idea that normal, nice people are sinners, that we are born sinful and can’t elude being a sinner by being moral or religious enough.

This is palpable nonsense. We may be born and doomed, as humans, to do bad things when we grow up,  but we are certainly not “born sinful”.  What does she mean by that? An infant is not born sinful in any meaningful sense except the Christian one: we’re supposedly born afflicted with the Original Sin of Adam and Eve.

Far, far better to reject that nonsense and just say that, as social beings evolved from small groups of primates, we sometimes act badly, usually out of inborn selfishness (perhaps the real “original sin”); and sometimes, in our modern and larger pack of primates, our selfish desires conflict with our need to keep good relations with our fellows. But if you said that it wouldn’t be religious. It would be humanistic.

The other aspect of Harrison’s column is the “forgiveness” part, and why it’s good to know that we’re “born sinful”:

The Eastern Orthodox practice of praying the Jesus Prayer has become important to me over the past few years. This prayer simply says, “Lord Jesus Christ, Son of God, have mercy on me, a sinner.” It is usually prayed repetitively and meditatively, again and again.

Notice that here she explicitly is asking for forgiveness from God. It goes on:

In praying it over and over, I noticed how strange and transformative it is to repeatedly identify myself as a sinner. I am not identified primarily as a mother, a writer, a woman or a priest. I am not primarily a Democrat or a Republican or a Christian. I am also not primarily an upstanding citizen or right or reasonable or talented or “on the right side of history.” Instead, again and again, in these received words, I call myself a sinner.

This recognizes that I will get much wrong. That as a writer, I’ll say things, however unintentionally, that are untrue and unhelpful. As a mother, I will harm my children — the people I love and want to do right by most in the world. And it tells me that I will harm them in real ways, not just dismissible “well, shucks, we all make mistakes” kind of ways. As a priest, I will lead people astray. I will not live up to what I proclaim. I will fail. I will hurt people, not just in theory or abstraction. I will cause true harm.

Again, this is Harrison’s personal way to deal with her “sin”, but a humanist might say (you don’t have to say it over and over again) “Yes, I’m human: I screwed up and will screw up again. But I will try harder not to screw up and to be nicer to people.”  That is not sophisticated humanism, but neither is Harrison’s pabulum Sophisticated Theology®. It’s her own personal mantra, and, to my mind, not a particularly useful one.

Finally, there’s the “forgiveness” bit. What’s clever about Harrison’s treatment here is that she must surely believe, as a priest, and as one who believes in original sin, that the Forgiver is God. But she seems to imply that it’s her congregation that forgives her. If the former, then she’s spreading Christian fairy tales; if the latter, well, it’s other humans that must forgive you—if you’re to be forgiven. And that is humanism.

But we’re not left to stew in guilt or shame. We aren’t just sinners; we are sinners who can ask for mercy and believe that we can receive it. Living in this posture is what makes forgiveness possible, which is the only thing that makes lasting peace possible.

Without a clear sense of right and wrong, we will end up endorsing injustice, cruelty and evil. But without an equally profound vision of grace, we will end up only with condemnation and an endless self-righteous war of “us versus them.”

After I kneel with my church each week, confessing that I have blown it, I am invited to stand and receive absolution and forgiveness. I’m then invited to “pass the peace” to those around me and extend to them the same mercy and forgiveness that I’ve received.

The Encyclopedia Brittanica (I can’t access the OED in Antarctica) uses this definition of “grace” in the religious sense:

grace, in Christian theology, the spontaneous, unmerited gift of the divine favour in the salvation of sinners, and the divine influence operating in individuals for their regeneration and sanctification.

If this is what Warren means by “a profound vision of grace”—and I’m pretty sure that’s what she does mean—then she’s saying here that true loss of our “sin”, our bad behavior, comes only from God’s forgiveness, not from human forgiveness. And note as well that Harrison has transitioned from the personal to the general here: she’s making a pronouncement that without a religious sense of “grace”, there is no conciliation for any of us with our fellow humans.

That, too, is wrong. One doesn’t have to believe in God to believe that there are ways to eliminate the division between humans. One way, of course, is through humanism itself: the notion that we are all brothers and sisters and must depend only on ourselves to right the wrongs of humanity. Warren’s “sermon” could be couched equally well—indeed, better—in humanistic terms.

What Warren has done is slyly slip her own Christian beliefs into a rather anodyne sermon about doing wrong and making up for it. And I still ask you, dear reader, why you think the NYT continues to publish these unenlightening religious musings. I really have no idea.

But she did get one thing right, noting above that “as a writer, I’ll say things, however unintentionally, that are untrue and unhelpful.”  In this column she does both.

Finally, Warren wants to hear how you’re praying for Ukraine! Below the article you can see this:

Like many of you, I have been praying for peace in Ukraine and for the Ukrainian people. As we feel dismayed and often powerless as individuals to respond to the horror of war, it can be hard to know how to pray. Please share your prayers or with us at HarrisonWarren-newsletter@nytimes.com or through the form below. We may mention some of your thoughts in next week’s newsletter. 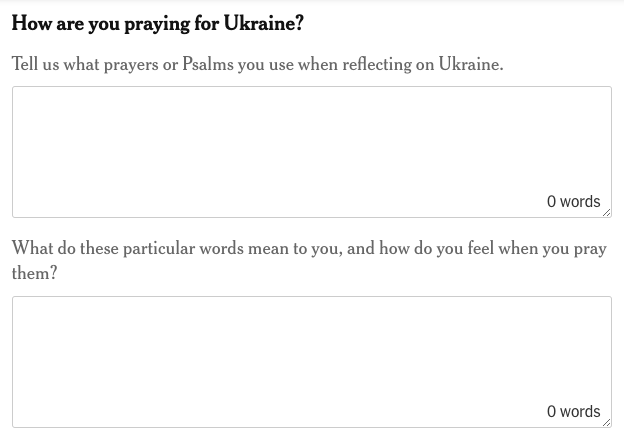 Praying sure as hell is not going to help Ukraine. They need tangible human assistance, not pleading to a god. I wasn’t even tempted to fill in the boxes.

48 thoughts on “Tish Warren preaches about sin in the NYT”