Several readers sent me either this Gizmodo story or a related one; click on the screenshot to read it:

I had no idea that SpaceX had created an internet system using a satellite dish, but they did. It seems to work well, but there’s one slight glitch that wasn’t imagined by its creators. Gizmodo gives the tail:

SpaceX’s Starlink has been making steady gains with its fledgling satellite internet service, surpassing 100,000 terminals shipped in 2021 and showing promising improvements in performance after initial speed tests produced lackluster results. However, the company’s run into an unforeseen hiccup with its dishes: Cats love them.

“Starlink works great until the cats find out that the dish gives off a little heat on cold days,” tweeted Starlink user Aaron Taylor.

His recent image of five cats huddled together on top of a Starlink dish went viral.In the photo, the Starlink dish isinstalled at ground level and surrounded by snow. As noted by the Tesla- and SpaceX-focused news outlet and store Tesmanian, the dish’s Snow Melt Mode may be to blame. Launched in 2020, this feature enables dishes to use self-heating capabilities to prevent snow build-up from interfering with the signal—and apparently provides a toasty outdoor lounge space for critters.

Besides, it’s foolish to just stick this dish on the ground. Someone could steal it!

Starlink works great until the cats find out that the dish gives off a little heat on cold days. pic.twitter.com/uyH3Kbqrie

Apparently the presence of cats doesn’t bother the system too much, but it does create a few interruptions due to the fact that cats are jerks:

“They have free access to heated house and come and go as they please. They are there by their own choice,” he wrote on Twitter. He went on to say the cats will “voluntarily leave [the] heated cathouse” to catch some z’s on the dish. It happens whenever the sun is out regardless of temperature because “the internal dish heater warms from the bottom and the sun warms from the top.”

In short, these cats have plenty of other places to hide from the cold or lounge in the sun, but they choose to instead hunker down on a $499 terminal. As any cat owner can testify, that tracks.

Well, if you get one of these, either be sure you live in warmer places or put it in a place inaccessible to cats. Even so, it’s not just cats that are the problem:

The Daily Fail reports on “Kefir”, a giant Russian cat named after the yogurt drink. Click on the screenshot to read. There’s a piece with better photos at Russia Beyond. 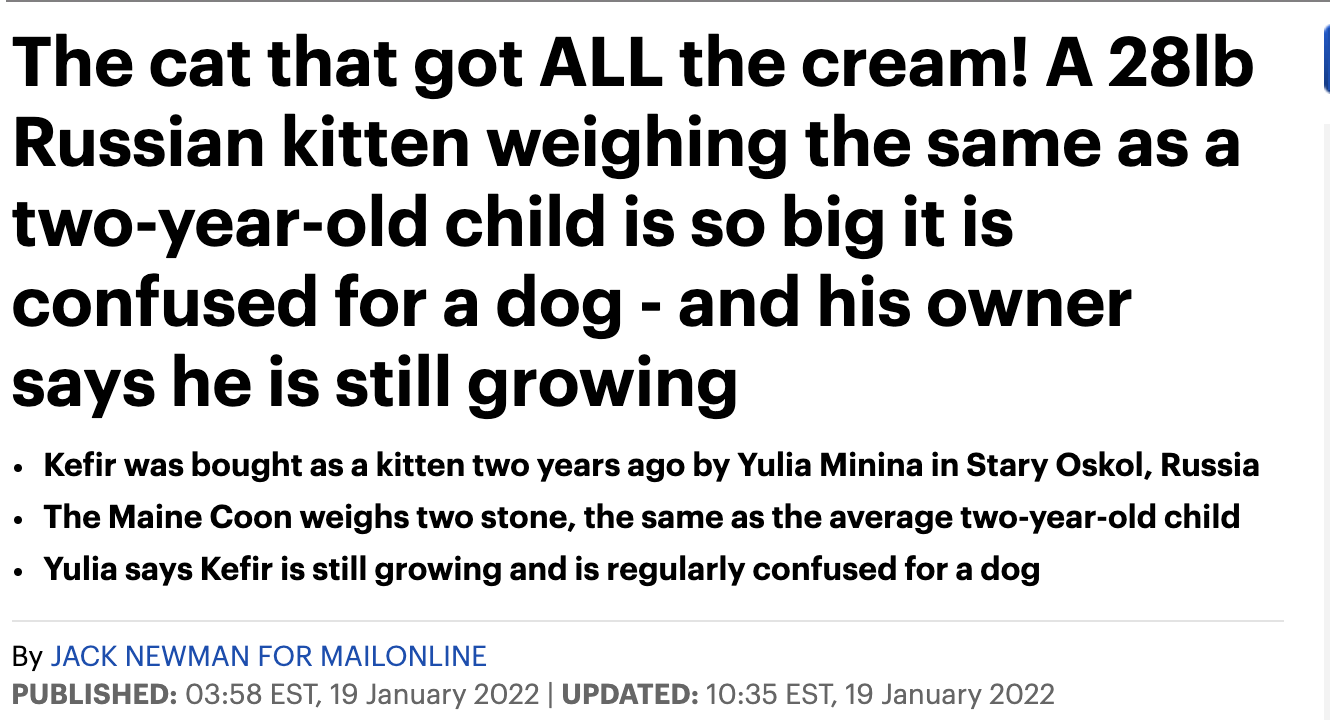 From the Russian article:

March 2020. Russia is in lockdown because of the coronavirus pandemic. Yulia Minina, 34, from Stary Oskol in Belgorod Region (495 km from Moscow) and a mother of two girls, decided with her husband and children to get a kitten to make their home life more fun.

“We never had cats at all before. We were just leafing through the ads of the nearest cattery and by chance saw a little white kitten. He was the only one in the litter at the time. I immediately fell in love,” Julia recalls.

When she went to pick up the cat, however, she was disappointed – he seemed prettier in the photo.

Kefir is a Maine Coon cat, though his staff didn’t know that at the time. This is perhaps the biggest breed of domestic cat.  Here’s Kefir as a kitten, before he GREW: 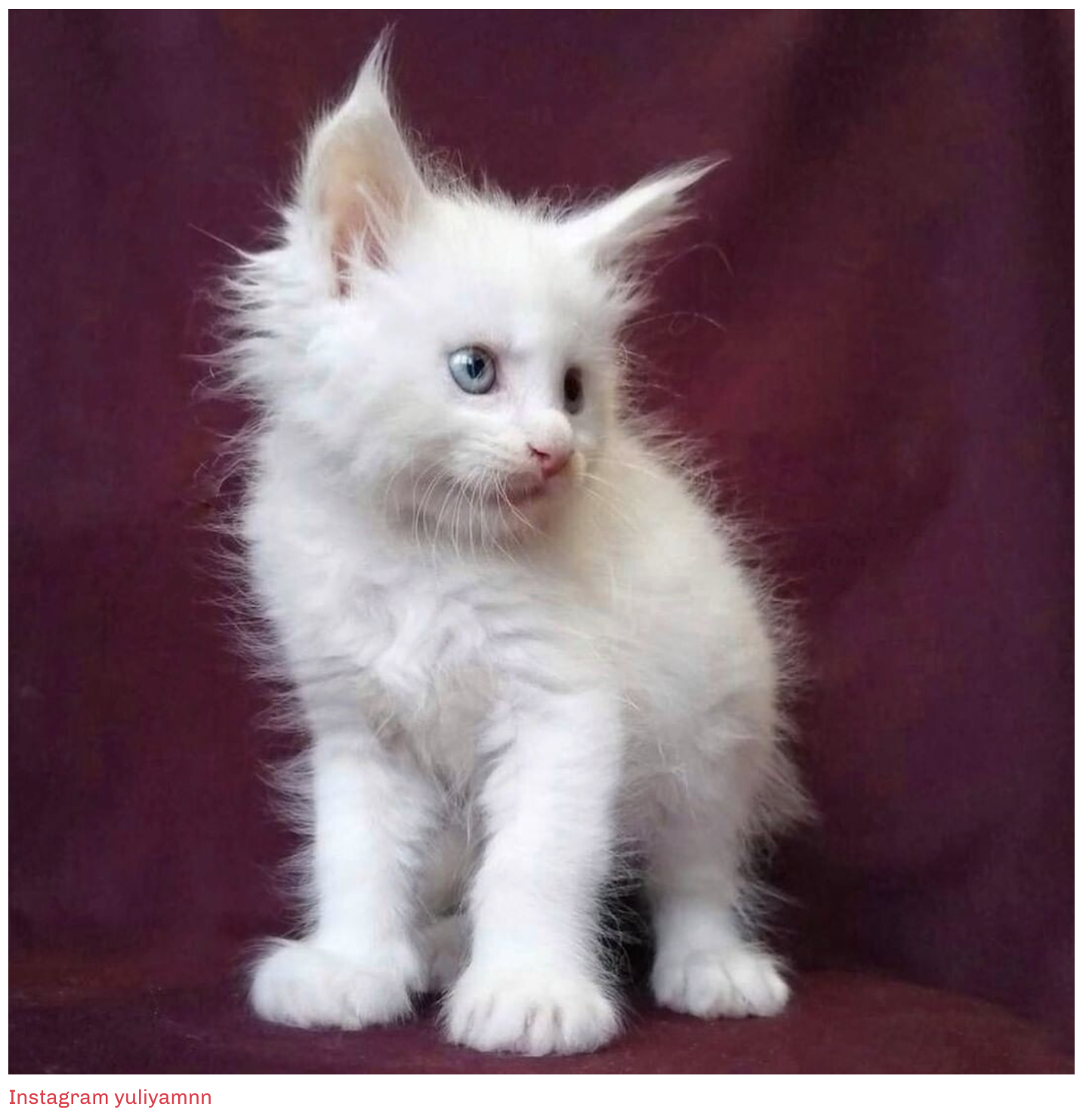 After nine months, the tassels on his ears and tail had doubled and, by the end of his first year, Kefir had tripled in size. He is now one year and 10 months old and weighs 12.5 kg (27.5 lbs.).

“In terms of personality, he’s just like a person. He’s very smart. Even sits with us at the table when we eat dinner, he has his own chair, so he keeps us company,” says Minina about the cat’s demeanor.

“As far as habits: he likes to sleep on my chest. When he was a kitten – it was normal. But now, when he suddenly lays down on my chest at night… well, I have to chase him away,” explains the owner.

I could tolerate 28 pounds on my chest—I think.  Some pictures of the moggy, who is now two years old: 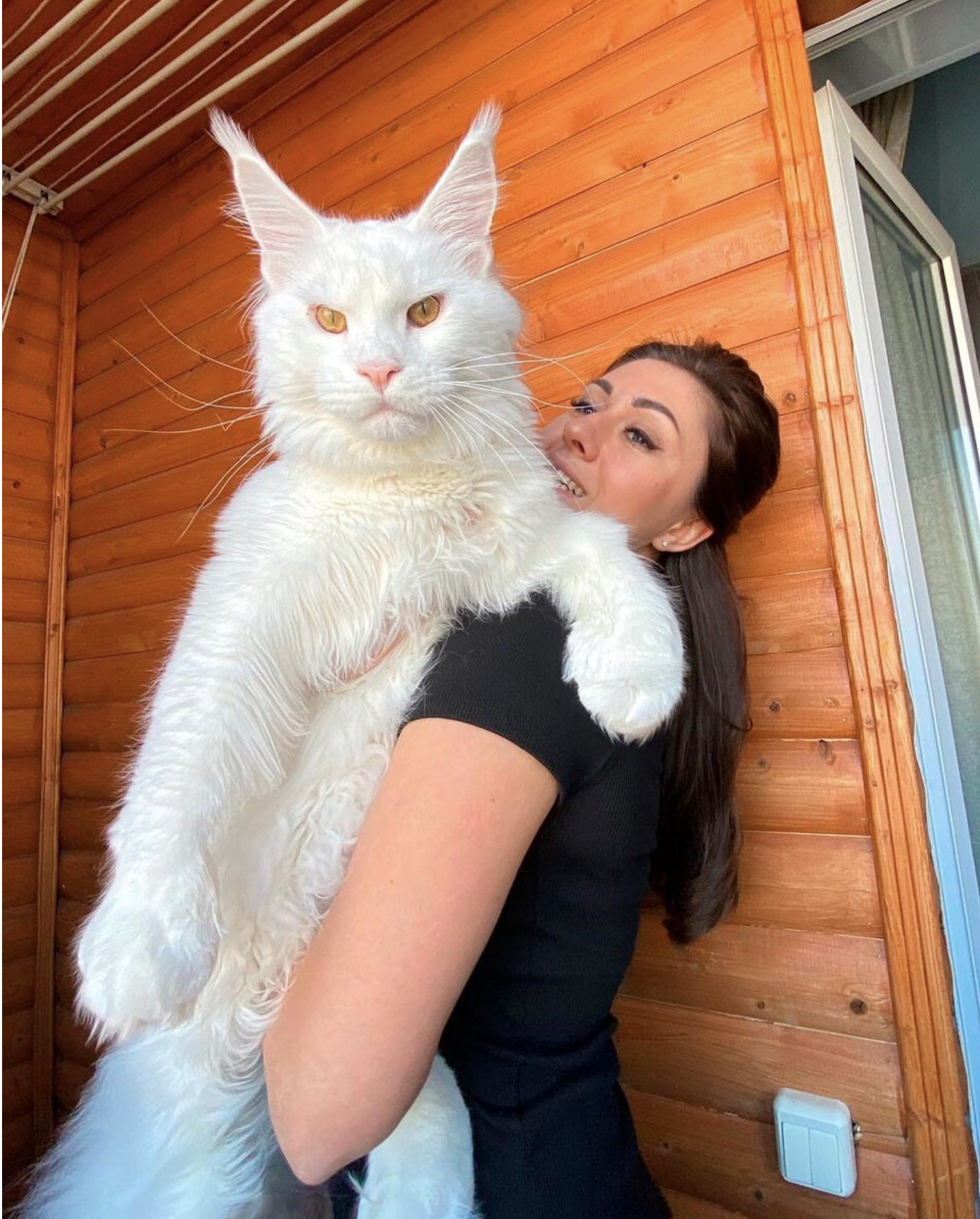 Julia does not understand the reason for her cat’s popularity. She photographed him twice for her Instagram profile and the photos quickly spread around on Russian and foreign media forums, including Reddit. The photo with Kefir garnered 18,000 likes and dozens of comments on Reddit. Some suggested that the cat’s owner was intentionally trying to make him look bigger with lenses and an optical illusion, while others speculated about his scowling face.

“Nah, that’s a Siberian Lynx. It feeds on the unworthy and drinks only vodka!” “And it does not look happy. Looks like he’s here for vodka and the unworthy and he’s all out of vodka,” some commenters wrote.

According to Yulia, most Russian and foreign fans don’t believe in Kefir’s existence and ask if it’s been photoshopped.

“Many people also want to buy Kefir, but that’s just awful. He’s a member of the family. No way will we give him up; we’ll only take pictures more often,” says Minina. 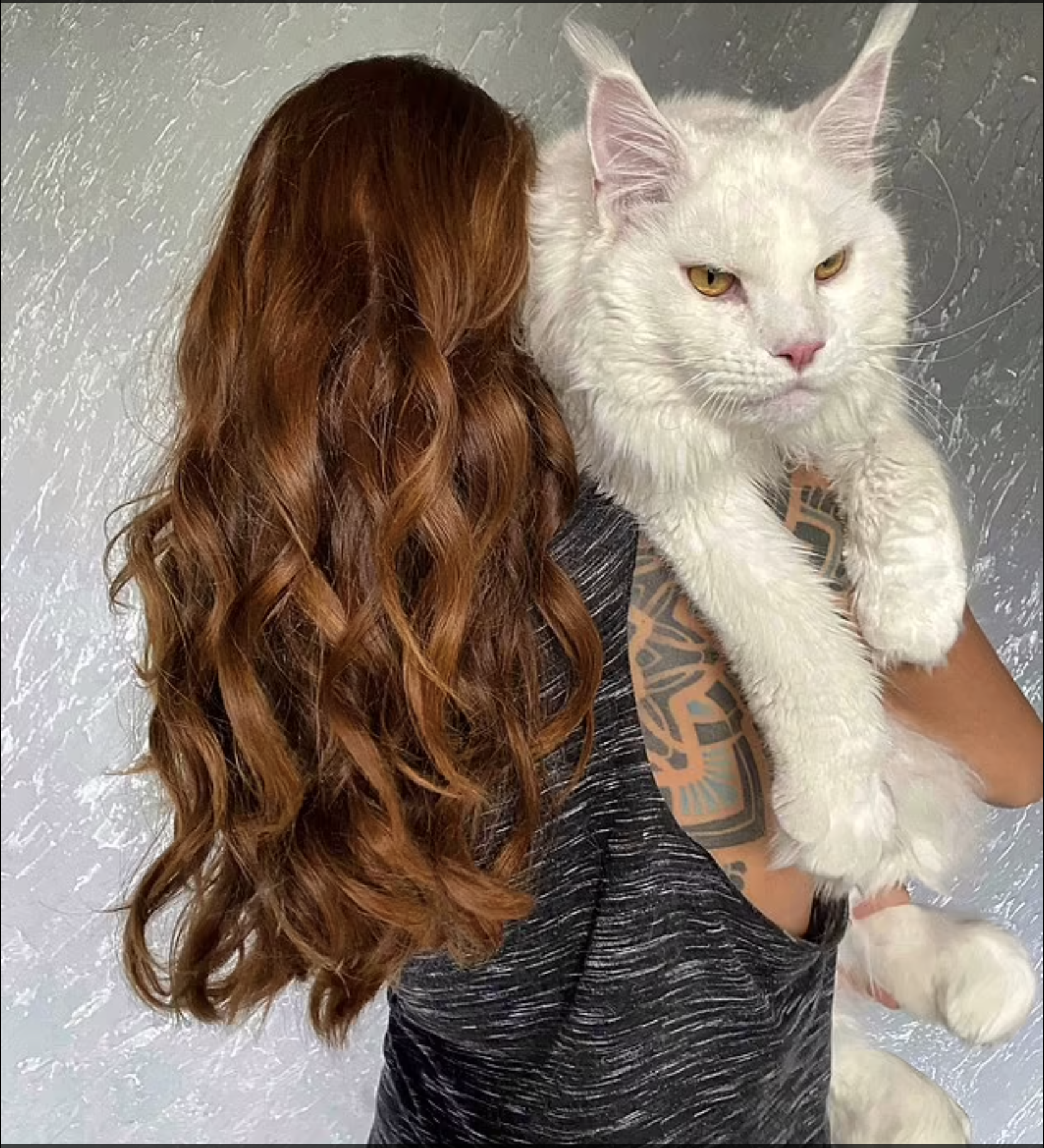 And he’s still growing! Imagine the cat food bills! Wikipedia says that unlike most house cats, who reach full size at about a year, Maine Coons don’t get full grown until they’re three to five years old. 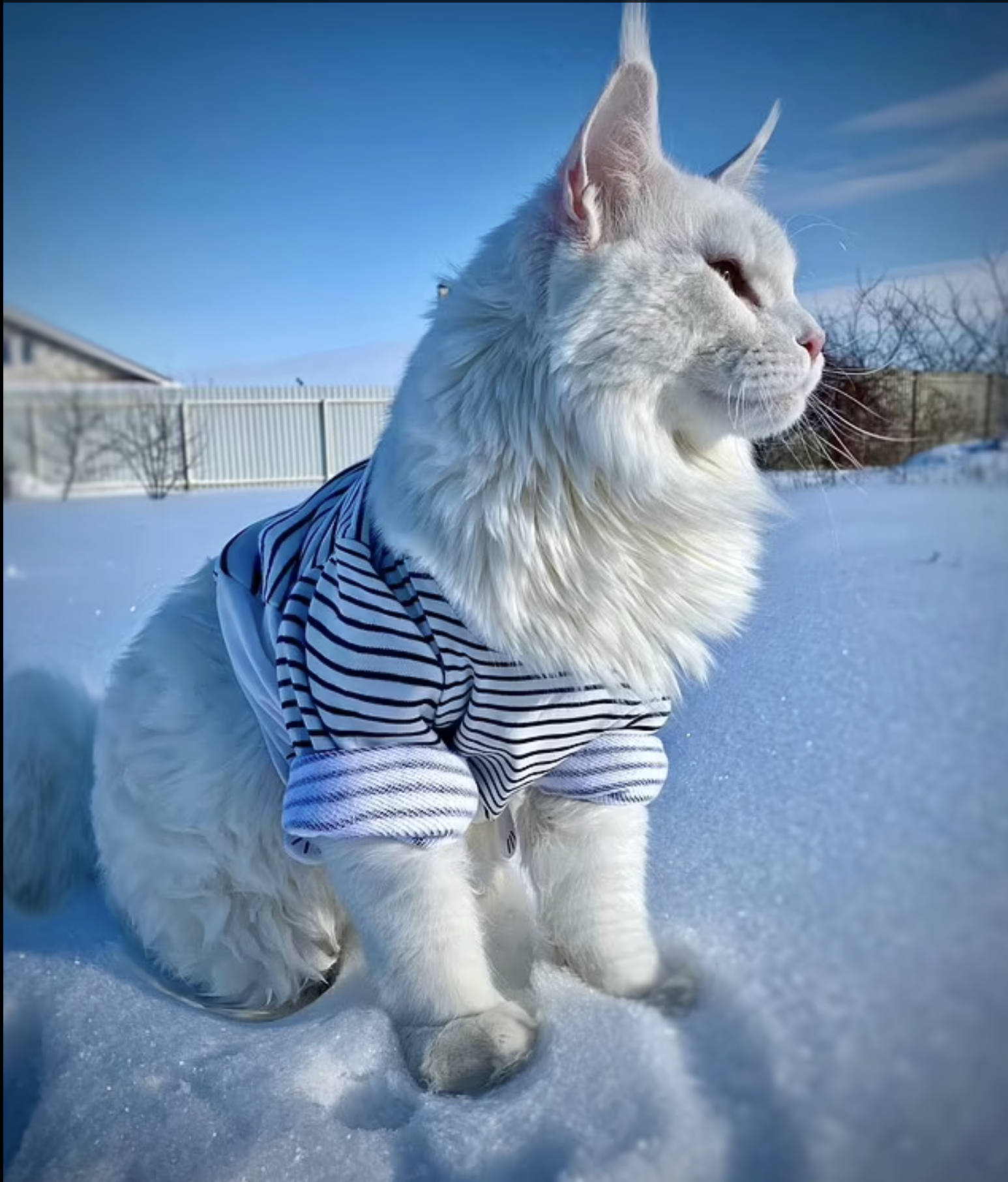 A Tik Tok. Kefir really is that big! Click the arrow.

Would you want a cat this big? I sure would!

Samurai cats revealed in The Cambridge Independent! (Click on screenshot.)

From a manuscript showing cats dressed as Samuari warriors to helmets, a board game and a priceless scroll, the treasures from one of the world’s most important collections of Japanese literature are being displayed for the first time at Cambridge University Library.

Samurai: History and Legend is drawn from the world-class collections of the library. Among the objects going on display for the first time is a seven metre-long scroll of the Lotus Sutra, a key Buddhist scripture in East Asia.

The library’s Lotus Sutra scroll was produced in Japan about 800 years ago with each Chinese character painstakingly handwritten in pure gold. The paper itself was dyed with indigo and decorated with gold and silver.

Here’s part of the scroll:

The free exhibition, which runs from January 22 to May 28, explores the historic roots of the samurai and the literary image of the samurai in manuscripts and woodblock-printed books from Japan. The objects provide a contrast to familiar imagery and modern perceptions of the samurai that – especially in the west – have led to widespread misunderstanding of their social and cultural role in Japan.

Exhibition curator Dr Kristin Williams said: “The image of a samurai warrior is iconic, both in Japan and overseas. However, the imagery we usually see is as much legend and mythology as it is history. We want visitors to question their assumptions about Japan while they explore and examine the rare books and objects in the exhibition. We may think of weaponry and armour when we think of samurai, but there was far, far more to their story.”

My emphasis below, though there’s only one photo from the book:

. .  The later objects in the exhibition are colourful and visually striking. During a long period of peace, Japan developed a publishing industry with books, maps and games for commoners and samurai alike. This later print culture shows a playful irreverence toward the samurai. The exhibition includes a book depicting cats dressed as samurai complete with swords, and a board game in which the players throw a die to follow the life of a medieval warrior. There are also sketches by Hokusai, one of Japan’s most famous artists.

However, I’ll add the picture below, which has been reproduced all over the Internet as if it were genuine. It’s not: the warrior, apparently walking an armored cat, is a modern creation (see below). 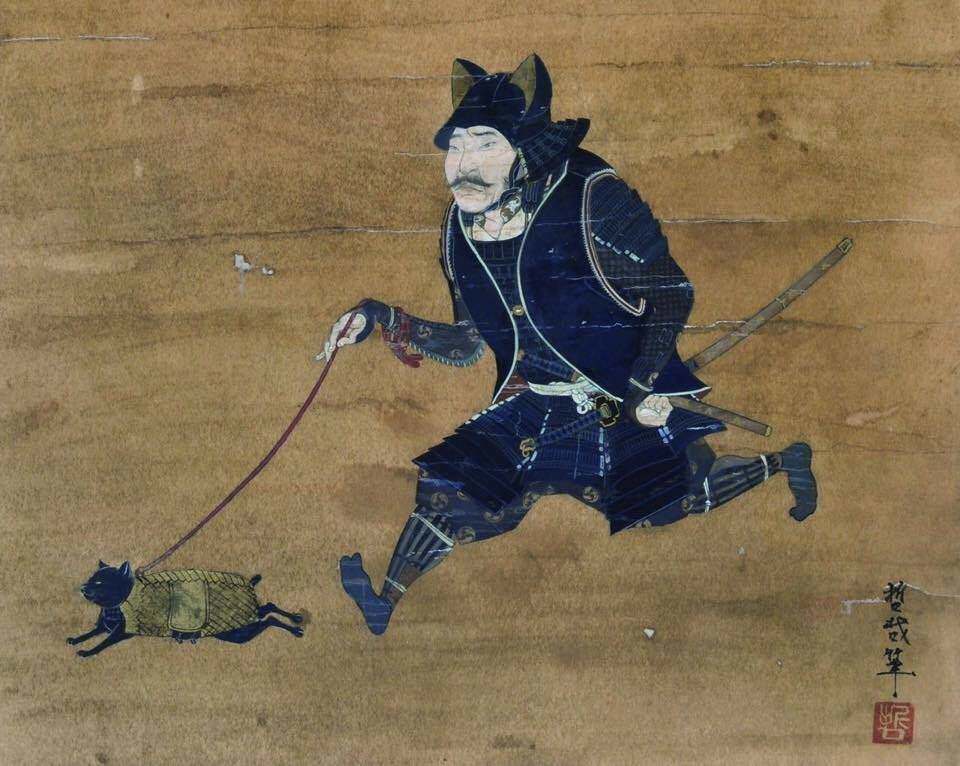 There are a variety of explanations of what’s being depicted:

My most favorite painting of Mongolian conqueror Genghis Khan pic.twitter.com/r2aY26LKTL

In reality, the paint is the creation of Japanese artist Tetsuya Noguchi, whose specialty is to depict samurai in bizarre, often comic situations.

He appears to have mastered traditional techniques to create highly-detailed replica armor that would not be out of place in a museum.

Every few years an artist gains cachet with pictures of hamburger-munching geishas and the like, painted in the fashion of ukiyoe or Nihonga. Though the gimmick is fun the first time, after a while it gets pretty predictable — good for a laugh or two, but hardly the trenchant commentary on “traditional vs. modern” that the artist usually proclaims it to be.

The best practitioners of this genre (Masami Teraoka comes to mind) make it work not because of the obvious satire, but because of their mastery of the classical art form used to set up the spoof. And once in a while the artist’s technique is so exquisite that it elevates the work entirely out of the realm of parody, however droll the subject matter.

Tetsuya Noguchi’s work is just such an example.