I have floated this question before, but want to raise it today to see if I can understand a distinction. And that distinction is between many people’s argument that they cannot be forced to get a Covid vaccination to stay on the job, but at the same time they allow their children to be forcibly vaccinated to attend public school.

Now there is no law in the U.S. saying that you must be vaccinated, period, though of course there are mandates specifying that you can’t work unless you’re vaccinated. New York City’s mandate for municipal workers went into effect today, after the Supreme Court turned down an emergency request yesterday to stall it. Up to 3,000 people might have lost their jobs this morning.  And yet many people still refuse to get vaccinated even if it means the loss of their livelihood. I see them on the news every night, making loud protests about their “rights” being violated by vaccine mandates. Along with that goes the mantra “this is my body and therefore it’s my choice.” And so they get fired, and some of them die, while others infect their fellow citizens.

This mass protest has culminated in the Great Truckers’ Protest of last week, and I hope it’s over now. (Did Trudeau show some moxie?) It was an act of civil disobedience, and therefore warrants punishment, but I had little sympathy for them.

What I don’t understand is this: these same people who assert their rights and bodily autonomy—and I see no “right” to be able to endanger the public safety by infecting others—make not a peep when they get shots for their kids to go to public school.

Not everyone understands that in the U.S., and presumably other countries, any child wishing to attend public school has to get a series of immunizations,

Here, for instance, are the vaccinations required for a child in to attend public school in Illinois.  I count 14 jabs needed to stave off ten diseases. That’s a lot of shots! 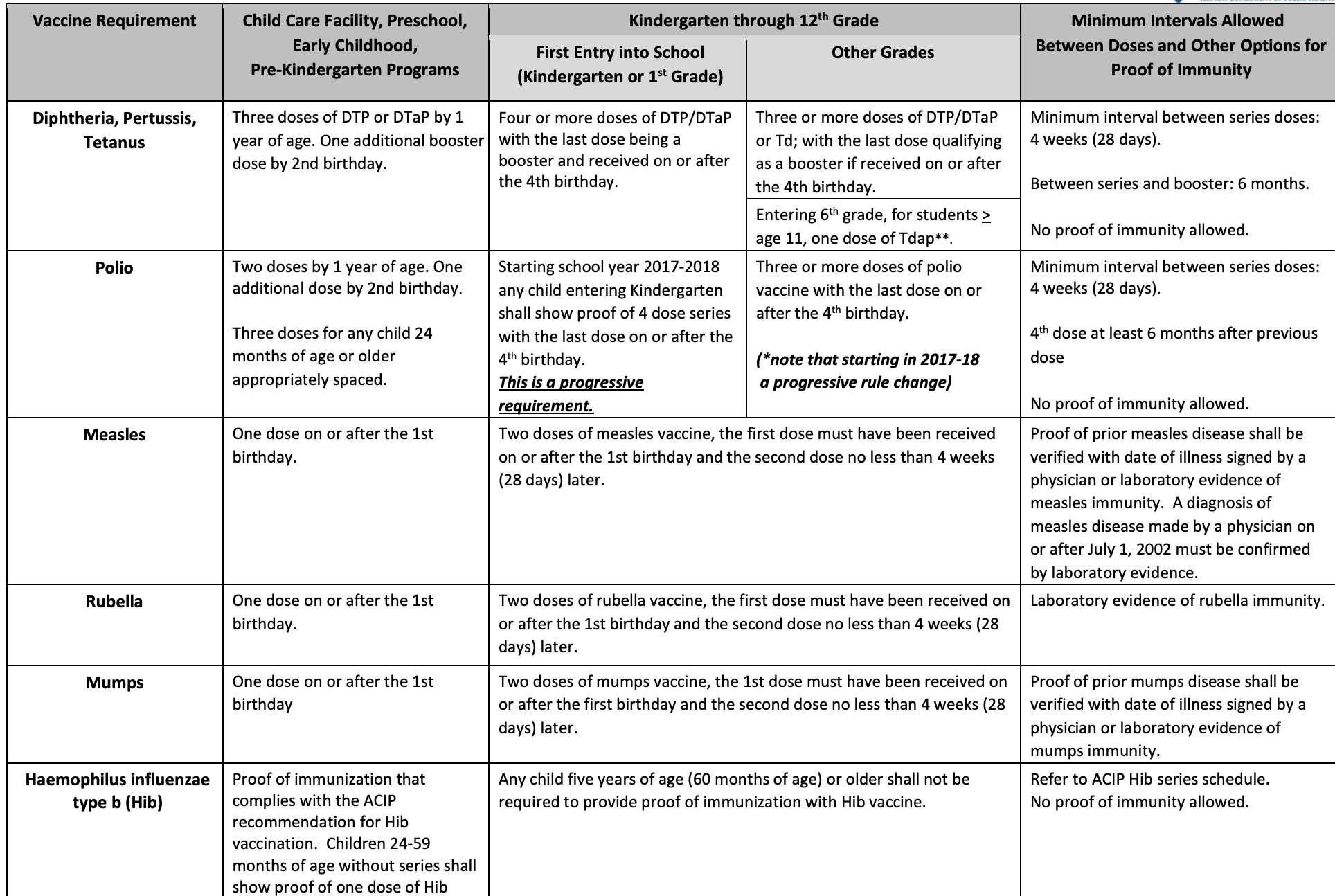 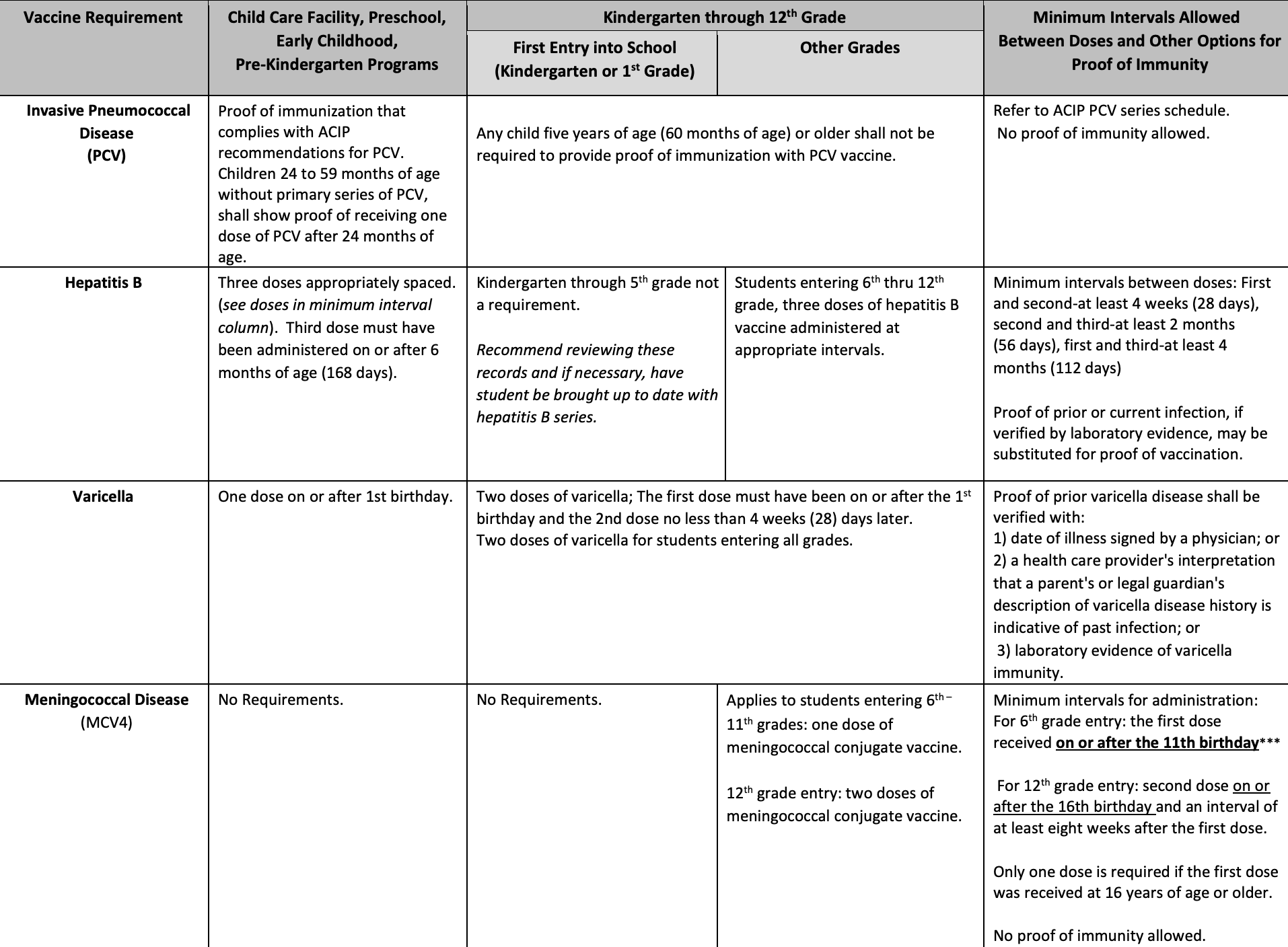 Now why aren’t the parents protesting this forcible vaccination? Isn’t that a violation of either the parents’ or the students’ “rights”? If you’re one of the many who talk about “rights” and “my decision”, and yet still want to walk around in public, yes, it’s certainly hypocritical to not bring up “rights” for your children as well. But, except for a few fringe anti-vaxxers, or believers who want religious exemptions for their kids (I’m not sure these are even allowed for school vaccination), we hear no talk of rights for school immunization.

Is this hypocrisy? Well, I can think of several reasons why you could say “no”:

a.) The school vaccines have been proven safe and effective over years of trial, while, of course COVID vaccines have been around just a bit more than a year. The parents could say, “These vaccines work and don’t have bad side effects, so I won’t speak of “rights” But then you could ask them how much safety must be proven before vaccination becomes mandatory. As I recall, when the polio vaccine came out, it became mandatory within just a few years, and people were begging to get it.

b.) You could say that you have the right to decide for your own body, but not for the bodies of your kids, and therefore they should get vaccinated. But this doesn’t work because parents make decisions about the medical treatment of their kids all the time, especially before the kid is sentient enough to make its own choice, which is at a pretty advanced age. For school vaccinations, the parents have to agree by the time the child is five or six.  (Note as well that parents feel that have the right to decide their children’s religious beliefs before the kids are old enough to choose!)

d.)_ They are willing to risk getting Covid, but the children are too young to afford that risk. But this reverts back to a) above: if the vaccine isn’t risky for your children, why is it risky for you? (In fact, it’s more dangerous for adults to get Covid than for kids).

There is more to discuss here, but I won’t get into it. I’m just curious why parents who obediently let their kids be vaccinated (even with COVID shots for college!) turn into enraged don’t-tread-on-me” types when it’s their own jabs at issue.

If there’s a rational answer, I would say that a)—proven safety and effectiveness—would be the one, but of course the Covid data so far shows that the risk is minor compared to the effectiveness. Certainly we know that the chance of illness, hospitalization, and death is greatly reduced for adults if they get the shot (we’re talking about resistance of adults to getting vaccinated). Vaccination for adults is, without doubt, a net good save for those who are medically compromised.

But I suspect that more is at stake here—perhaps ideology.  People have largely lost control of their lives during the pandemic, and refusing shots is a way of getting control, and also of showing the government that they can’t control you. This is likely connected with a conservative or libertarian ideology that opposes government intervention. In the case of the truckers, it seems to me they’re pissed off about a lot of things, including  loss of jobs and rising prices, and protesting against vaccines is the nucleus around which these resentments coalesce.

But maybe I’m not asking a meaningful question. It’s just that when I see a bunch of angry people yelling about “rights” and “bodily autonomy” on television, it makes me wonder whey they go all quiet when the needle goes into the arms of their kids.

82 thoughts on “Vaccinations in school; why shouldn’t they be the parent’s “choice”?”