Today’s contribution is a biological tale of fig wasps, a fascinating species. (Do you know that every time you eat a fig, you ingest at least one wasp?) The photos aren’t from reader Athayde Tonhasca Júnior, but the story is, and it’s a good one. Click on the photos to enlarge them. Athayde’s tale is indented:

When ecologists talk about ‘keystone’ or ‘indicator species’, what they often mean is ‘my favourite species’, or ‘the species I work with’. But one group of organisms truly deserves the label of keystone species: figs. The genus Ficus comprises over 900 species spread throughout the tropical and subtropical regions as shrubs, lianas (woody vines), or trees. Strangler trees – which don’t strangle anything – are one of the best known types of fig plants.

Many fig species produce fruit asynchronously throughout the year, so many animals have a steady supply of abundant and nutritious food. This is especially important during the dry season, when most plants do not fruit. Figs are often preferred even when other fruits are available because they are rich in calcium, a mineral usually in short supply. So figs are essential for a range of birds and mammals such as pigeons, toucans, parrots, macaws, bats, peccaries and monkeys. Over 1,200 vertebrate species feed on figs. 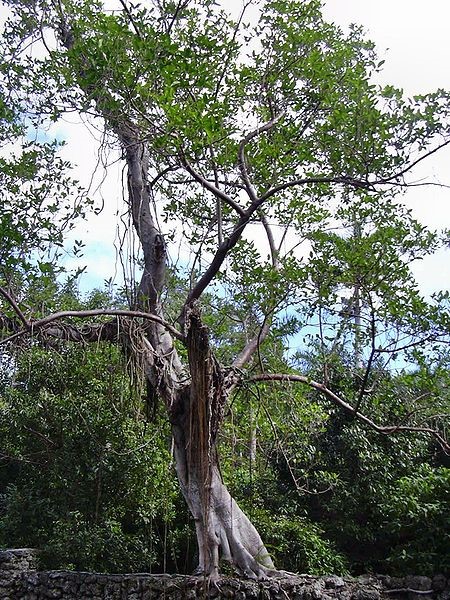 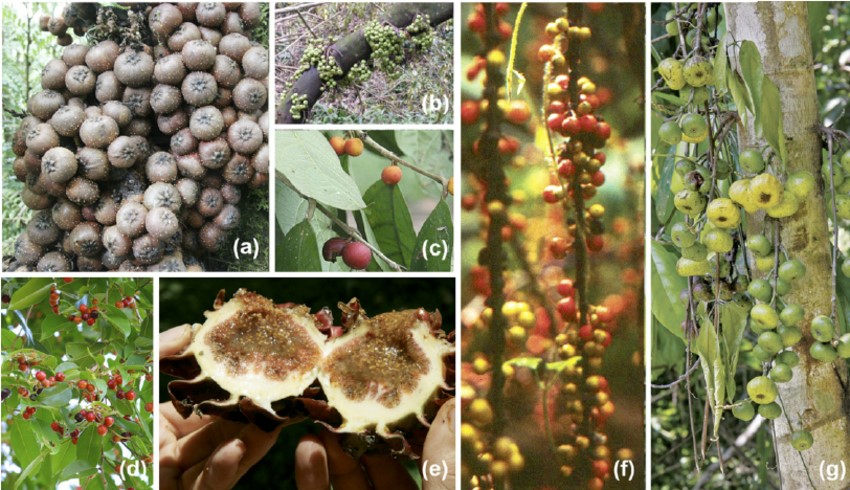 Figs support the diversity and functioning of ecosystems around the world, but they can only do that thanks to some tiny wasps.

Below: Chalcid wasps are an enormous group of insects, estimated to contain over 500,000 species. Most of them are parasitoids of other insects, but a small group belonging to the family Agaonidae has one purpose in life: to get into a fig to reproduce. By engaging in fruit breaking and entering, these wasps, appropriately known as fig wasps, pollinate the fig plant. 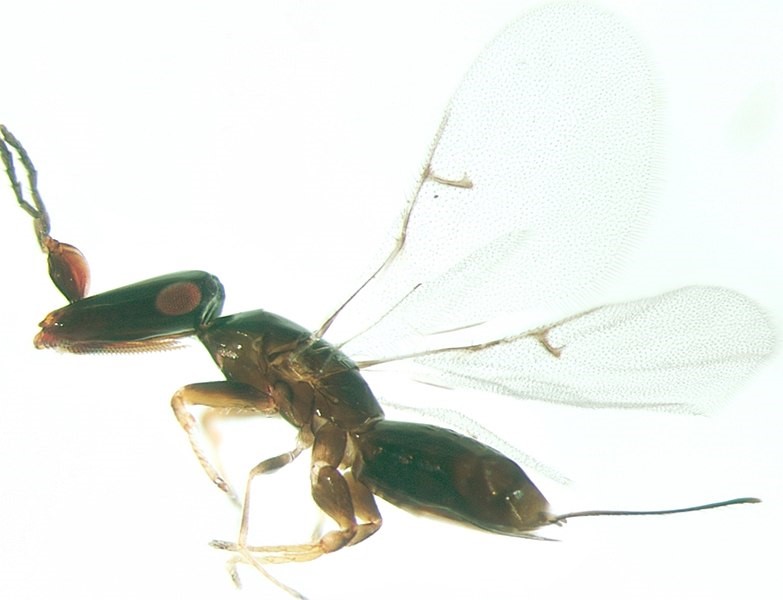 The mission is made immensely complicated by figs’ morphology. Botanically speaking, a fig is not a fruit but a type of inflorescence known as a syconium (from the Ancient Greek sykon, meaning ‘fig’, which originated ‘sycophant’, or ‘someone who shows a fig’; a term of curious etymology). A syconium is a fleshy, hollow receptacle containing simplified flowers or florets, and each one of them will produce a fruit with seeds in it. A fig harbours dozens to thousands florets and fruits, depending of the species. The crunchy bits of the figs we eat are not seeds but fruits.

Florets need pollination, not an easy proposition when they are bunched up and locked inside a container. So the fig wasp’s first hurdle is to get inside the fig. A female wasp does it through a hole at the bottom of the fig (the ostiole), which loosens when the fig is ready for pollination.

Below: Longitudinal section of a syconium. The inner wall of the hollow chamber is covered with florets, and the ostiole at the bottom is the door for female wasps © Gubin Olexander, Wikipedia Creative Commons: 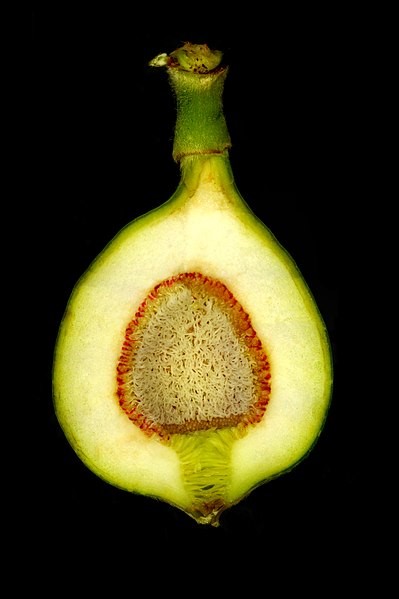 A receptive fig does not make life much easier for the female wasp. She has to chew her way through, pushing and squeezing, often having her wings and antennae snapped off in the process. She will find a floret, insert her long ovipositor into it and lay an egg. As she’s busy doing that, pollen grains attached to her body get rubbed off onto nearby florets, assuring their pollination. With the job done, the female wasp dies.

The ovules of florets that receive eggs will form galls in which the wasp larvae develop, while pollinated ovules turn into fruit. The adults chew their way out of the galls, males first. Sometimes they help females get out from their own florets and mate with them. Males will then chew a hole through the fig wall to let the females escape. Males stay behind: they couldn’t go anywhere, as they have no eyes and no wings. After an short life spent entirely inside a fig and marked by fleeting glorious moments such as fertilising females and setting them free, males die.

Below: two male Pleistodontes imperialis wasps on the left (wingless, smaller, black headed and amber-colored) and two females inside a Ficus rubiginosa syconium. The inseminated females have emerged from their individual flowers and are ready to escape © W.P. Armstrong, US Forest Service: 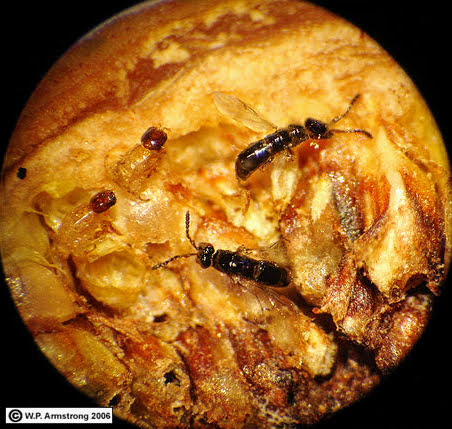 A female collects pollen grains from intact florets or picks them up by accident before braving the world outside. She will follow the trail of chemicals released by a host plant to find another fig receptive to pollination and start the cycle again. But she must be quick: she has a few hours to three days to live, depending on the species. And to complicate things, not any fig will do. Each species of fig tree is pollinated by one or a few host-specific fig wasps, which is an outstanding case of coevolution.

The great majority of female wasps don’t make it, but a few catch rides on wind currents above the canopy to find host plants over 10 km away, farther than most pollinators. This is a remarkable achievement for such small, fragile, and short-lived insects.

Perhaps nothing exemplifies better the wonders of fig pollination than the exploits of Ceratosolen arabicus in Namibia. This wasp pollinates the African fig tree (Ficus sycomorus) along the Ugab river in the North Namib desert. This is one of the most inhospitable and remote corners of the planet, famous for its Skeleton Coast, a place of shipwrecks and marooned sailors. African fig trees occur in isolated clumps along the riverbank, but that’s not a barrier for a female wasp: she covers average distances of near 90 km and a maximum of 160 km over the desert, at night, in search of a receptive fig. As she lives for less than 48 h, her quest must be flawless. 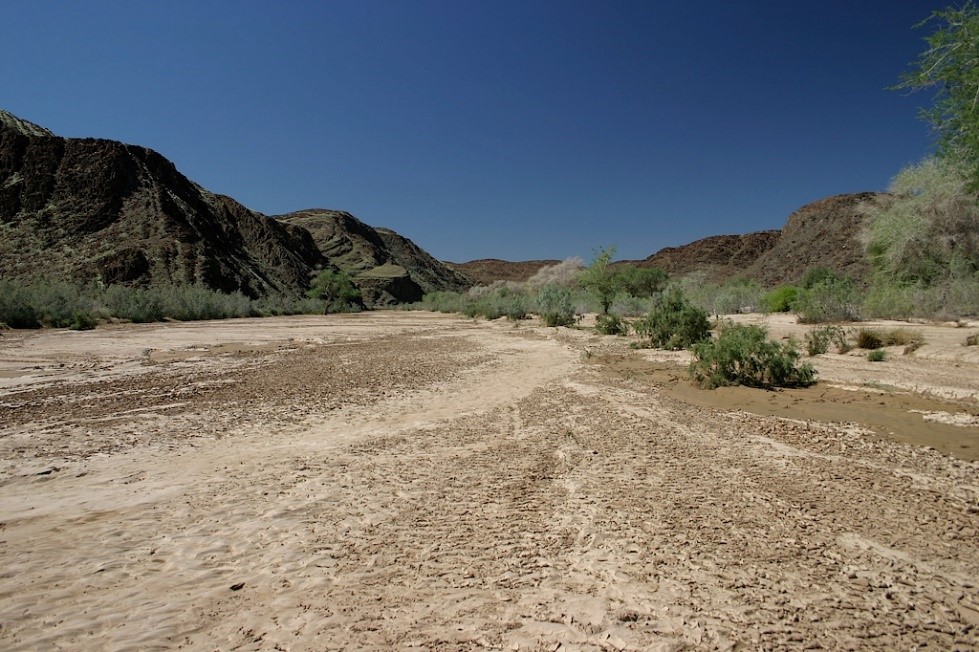 How do figs and fig wasps relate to us, denizens of fig-less countries? This pollination system has a profound influence on global biodiversity and ecosystem functioning, so it affects us as well, even if indirectly. The story of figs and wasps also illustrates the capabilities, drive and hardiness of minute, easily overlooked insects that are so important for us and nature.

You can learn much more about figs and fig wasps at Figweb from Iziko Museums of South Africa.

25 thoughts on “Readers’ wildlife tale: Of figs and wasps”