When an institution or media outlet goes after Israel itself every chance it gets rather than criticizing specific Israeli policies, or drags in policies (“occupation” is the main one) every chance it gets, whether or not they’re relevant, then you know that that organization is verging on anti-Semitism or is indeed anti-Semitic. Just the frequency of resolutions passed by the UN, overwhelmingly against Israel rather than countries far more invidious, shows you the degree of Israel hatred of that body.

When I saw the Associated Press article about the lorry/car crash in the West Bank that killed eight (below), I was taken back at the gratuitous criticism at the end, and then I remembered that the AP had been criticized for anti-Israel bias before (see below), and I had posted about it several years ago.

I reproduced the text of this article in this morning’s Hili news, but there was only one comment about it, and it deserves a bit more scrutiny:

Here’s the whole AP article and headline; click either to go to the site, though I’ve reproduced the whole thing. 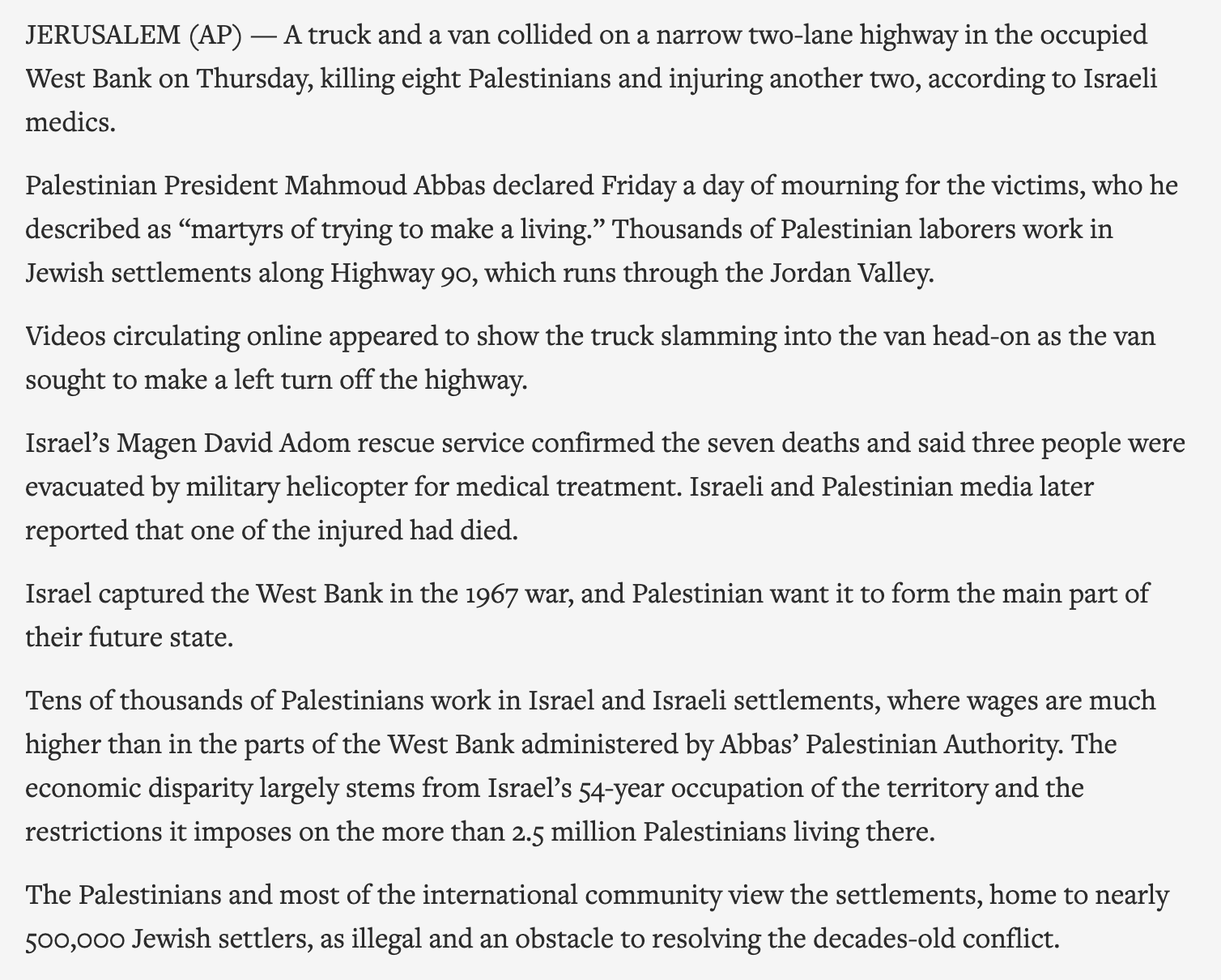 Now half of this article is devoted to criticism of Israel and the disparity between the wages of Palestinians and Israel in the West Bank. Do be aware that this disparity is not between the two groups when working for individual Israeli companies, for wage discrimination against “guest workers” is illegal under Israeli law.

I am not arguing about the settlements here, but about a). the nature of wage disparities, b). the cause of wage disparities, and c). why on Earth the AP would devote half its article to a completely irrelevant indictment of Israel when simply reporting on a vehicular accident involving Palestinians.

The anti-Israel sentiment is not only misguided but totally gratuitous, and that’s all I’ll say about that. As for the relative poverty of Palestinians, it’s not due to wage discrimination by Israelis, but by the nature of Palestine itself. First, if the PA and Hamas didn’t spend so much money on rockets and terrorist attacks, often enlisting young children to help dig tunnels under the Israeli border, they’d have a LOT more money to improve their country. This is a choice made by the government and many Palestinians. Second, when nearly every Palestinian child (and yes, I mean almost every one) is taught from the beginning of school that the most laudable ambition they could have is to die a martyr fighting against Jews, how do you expect kids to grow up with ambition to better themselves or the Palestinian territories?

Why the AP threw in a superfluous and erroneous slur like this is best left to them, but I don’t think that even the New York Times would tolerate this kind of biased and shoddy journalism (its biases are more subtle). Note too the mention of Israelis trying to save Palestinian lives, something that is done regularly by Israel—even trying to save the lives of Hamas leaders—but completely ignored by the West. Is this the action of an apartheid state? Even South Africa under apartheid wouldn’t go to such lengths to help the oppressed.

Israeli hospitals also train Palestinian doctors who go back to their territory and save the lives of potential terrorists who could kill Israelis (in the case of Hamas leaders, that’s their precise aim). When I asked Malgorzata why Israeli hospitals help the enemy this way, she responded, “That’s just what Israelis do.”

To see more about the AP’s bias, read this longish piece from The Atlantic by Matti Friedman, who worked for the AP (click on screenshot; another Friedman article from Tablet is here). Both pieces are from 2014, but, as far as I can see, things vis-à-vis the biases of Western “liberal” media have only gotten worse:

On to the annual awards of the Simon Wiesenthal Center for the top ten countries or institutions that are anti-Semitic. Most of them (Iran, Hamas, CAIR, JVP, and so on) are familiar to me, but one of them struck me. It’s #3 on the list below; click the screenshot to see the pdf:

And. weighing in at #3, right after Iran and Hamas, is this (remember, this is just a list for last year, not the all-time top ten): 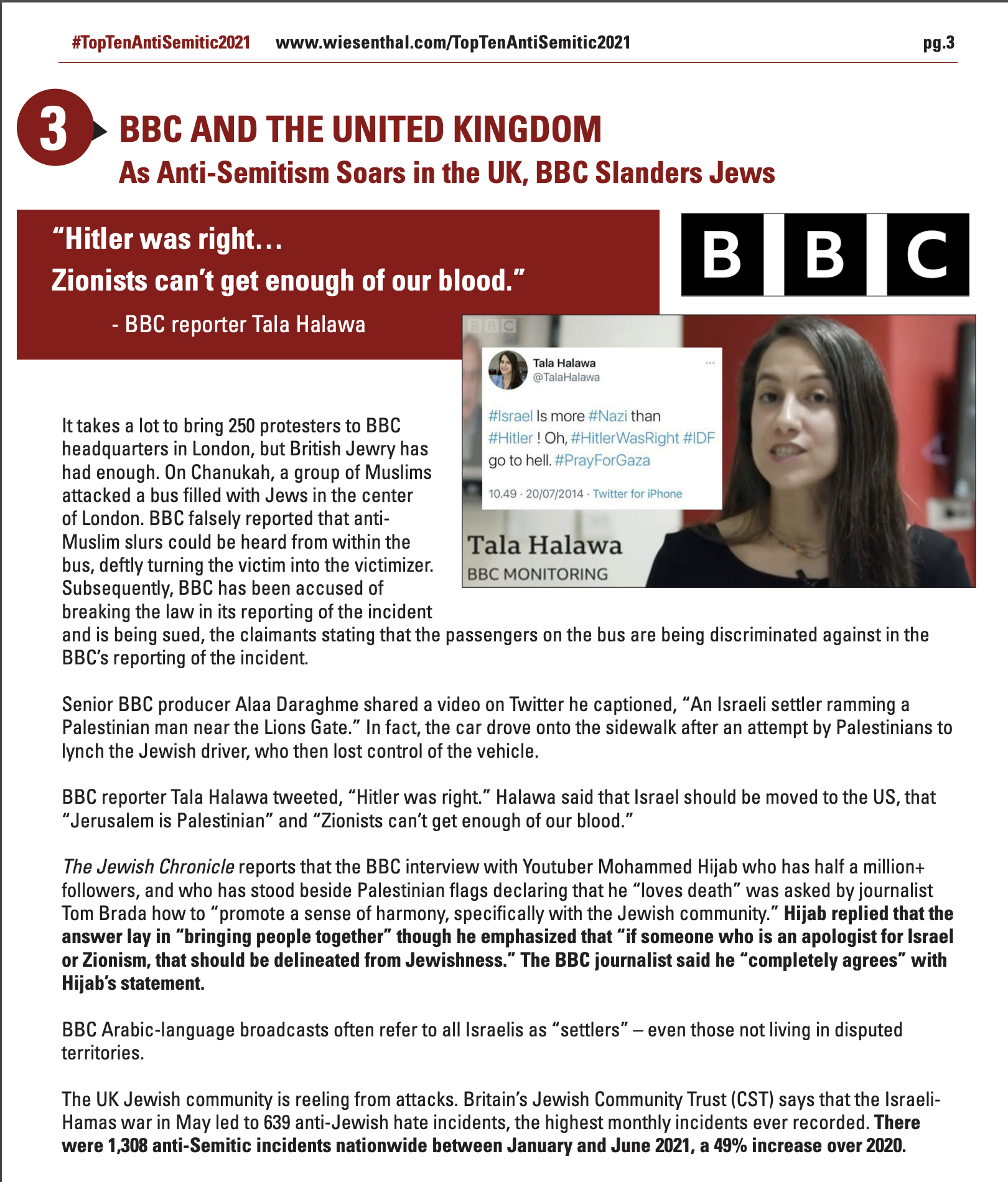 I’ll let the Brits or the journalism mavens argue this out, but if you’re defending the BBC, you must defend the facts adduced above.

46 thoughts on “Anti-semitism in mainstream Western media: The AP and the BBC”