I don’t subscribe to the Times of London, so I count on my UK readers to alert me to anything interesting there. And today two of them did: Readers Pyers, who said the article below was “a superb piece”, and reader Adrian, who said this of the same piece (quoted with permission):

Been following your posts on E O Wilson and that horrific Scientific American article about him. [JAC: see that article here.]

Just noticed this morning that the Times (UK) has weighed in on the issue via a regular op-ed writer, Danny Finkelstein. Finkelstein is a regular contributor to the paper, and is a Tory peer. He belongs however to a very liberal strand of Toryism, and wouldn’t have much in common with the current Tory party, I imagine. I consider myself centre left, but very much like his writing. He always makes me think and question my own biases. He’s one of my go-tos for getting a sensible conservative view on the world – so in that respect, in my view, he sort of fulfills the same role that Andrew Sullivan does on US issues.

Anyway, his take on the cancelling of E O Wilson is a good one. And he also stands up for Paige Harden too – seeking to build a consensus around the idea that truth is not a left or right wing political issue.

I confess to feeling bamboozled by life at the minute. It seems only a minority of the people I consider to be on ‘my team’, the centre left (there are honourable exceptions of course), are keen to stand up against the revisionism that is currently de rigueur. I do find myself increasingly agreeing with some folk I would once have considered odd bedfellows, on the centre right. Maybe I’m just getting old, or maybe it is the polarised times we live in? I can’t quite decide between these options.

I currently tell myself that the extreme pathologies on the left and right of politics need to be opposed, and if that means centre left and centre right find common ground, then that is a good thing.

Now you won’t get anything but a few paragraphs if you click on the screenshot below, but the text is available via judicious inquiry. If you do have a Times subscription, you’ll get to see the whole thing. At any rate, I’ll give some quotes to show its tenor. Adrian has already informed us about author Daniel Finkelstein. 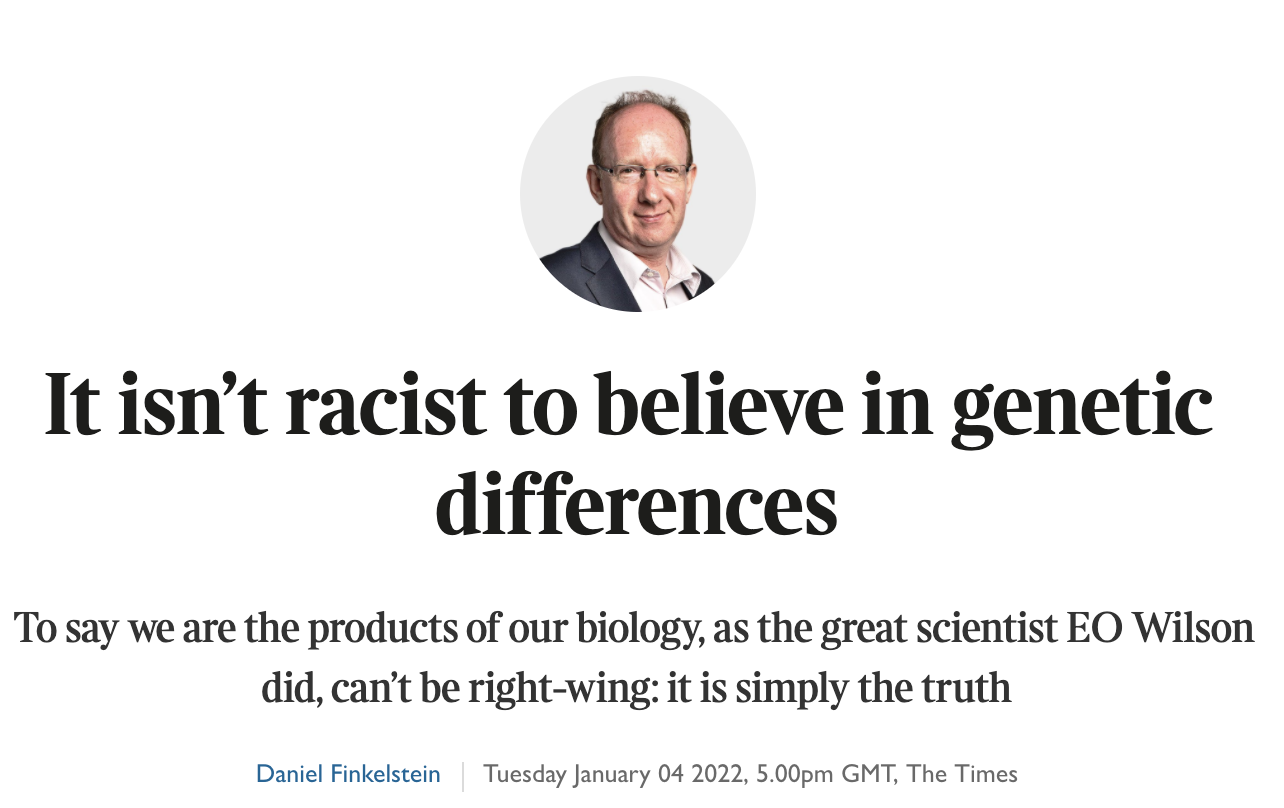 It is a remarkably well written and thoughtful piece, which defends Wilson against that idiotic attack in Scientific American, and also defends Kathryn Paige Harden, a left-winger whose recent book argues that the Left cannot ignore the palpable fact of genetic differences among people (my WaPo review of her book is here).  We are not, say Finkelstein and Harden, blank slates.

I can do no better than quote the author himself on a few selected topics (I’ve chosen the quotes and grouped them).

Last week EO Wilson died, and the world lost one of its leading scientists. The professor had started by studying fire ants and his knowledge of ants was peerless. But he had broadened as he had aged and had begun to consider human beings. Humans are animals too, after all, so our social organisation, our behaviour, our hierarchies, our urges will, to some extent at least, be the product of our biology.

This, the foundation stone of sociobiology, seems an unremarkable observation, but it provoked a remarkable reaction. Marxists and radicals, well represented in American universities, saw it not as a scientific hypothesis but as a political attack. Their argument was that human behaviour was overwhelmingly the product of social and economic organisation. Humans were, in essence, a blank slate, one very much like another. If Wilson was right, then this idea was wrong. If Wilson was right, societies were going to be harder to change. If Wilson was right, people might not come out equal even with all the social engineering in the world. So Wilson simply couldn’t be allowed to be right.

The weapon of choice in the battle to take down sociobiology was the accusation of racism. . .

Indeed one of the most useful results of studying the genetic and evolutionary basis of human behaviour has been that it has shown that the Nazis and other racists are wrong. And Wilson was quite clear about that. But unfortunately the accusation that Wilson was a racist was not made only by students. It was made by other academics seeking to protect unconvincing leftist ideas about social organisation. And it is still being made. A couple of days after Wilson’s death, Scientific American published an article by a University of California associate professor, reviving the charge of “racist ideas”.

It was an astonishingly muddled article whose vague arguments slip out of one’s hands every time one tries to grasp hold of them. Its appearance owed more to intellectual and political fashion than to rigour.

Kathryn Paige Harden on genetics:  I gave Harden’s book a mixed review. The first part, which shows the substantial genetic differences between individual humans—differences that affect our performance and chance of success in life—is very good, and well worth reading. It is the second part, where Harden discusses what social engineering can be done to make people more equal, that I criticized, for she offered no credible solutions. (Granted, solutions are very hard!).  Finkelstein:

Many of our abilities are heritable.

If we ignore this we are making social policy impossibly hard. As the egalitarian and geneticist Kathryn Paige Harden argues in her recent book The Genetic Lottery: “Genetic differences between us matter for our lives. They cause differences in things we care about. Building a commitment to egalitarianism on our genetic uniformity is building a house on sand.”

We don’t have to live with the outcome of genetic disadvantages. That would be like saying that although I’m short-sighted I shouldn’t be allowed glasses. But we do have to recognise genetic differences, or we end up denying glasses on the grounds that short-sightedness is the fault of capitalism and we need to nationalise the water industry first.

The idea that discovering natural difference in capacity is somehow right-wing is deeply puzzling. The truth doesn’t have a wing, it’s just the truth. But it’s not just that. There is a randomness to genetic inheritance, just as there is in economic inheritance. With the latter it is left-wing to observe this randomness and argue that we should help the disadvantaged poor. Why would people on the left not wish to even acknowledge the randomness of genetic inheritance? It is perverse.

The three reasons to rebut the ideological challenge to evolutionary psychology:

There are three reasons to rebut this challenge firmly. The first is that it is our duty to Wilson, a very great scientist. His contribution to the understanding of animal behaviour — of ants, of humans, of all nature — has been profound and it would be both cowardly and a tragedy to allow his reputation to be attacked when he is no longer here to defend himself against a baseless charge.

The second and even more important reason is that Wilson was achingly, obviously right. How likely is it that human beings are the one species whose capacities and behaviour aren’t largely influenced by biology? If every other animal’s behaviour demands an evolutionary explanation, how can it possibly be that ours does not?

He then refers to ideologically based criticism of palpable truths—like the fact of substantial genetic differences between individual humans adduced by Harden:

. . . Which is the third reason for defending Wilson and the study of sociobiology. Scientific methods and the search for truth matter. The accusation that sociobiology is racist rarely rises above the level of saying that as the Nazis were interested in genetics, genetics must be Nazi. It’s a bit like attacking Linda McCartney’s soya-based sausages on the ground that Hitler was a vegetarian.’

As we develop our capacity to study our genes we are going to learn more about human nature. We must be allowed to talk about that, even if the things we discover unsettle political activists and the orthodoxy they have adopted. We must defend good science against bad politics.

If the controversy over EO Wilson teaches us that, than the great scientist will have rendered us one final service.

This may be enough of an excerpt to satisfy you. If not, well, you know what to do.