I was going to write about this article today, but it almost seems outmoded in light of the drubbing Democrats are taking in various places. Clearly, the extreme “progressive” wing of the party is pulling it away from victory.  Youngkin won in Virginia largely because he played up the “Critical Race Theory in School” argument, but I wouldn’t want that victory to mean that schools should stop teaching about the real oppression in American history or about the Civil Rights movement, the odious treatment of Native Americans, and so on. We just have to do this sensibly, and I hope there’s a way that’s sufficiently sensible that Republicans can’t make hay of it.

But I digress. Below is a piece written on Bari Weiss’s site by David French, identified as “a senior editor at The Dispatch a columnist for Time, and a member of Persuasion’s Board of Advisers.” And I think it’s sensible and strikes the right tone.

Click to read for free (but do subscribe to her site if you read it often). Do note Norman Rockwell’s famous painting, “The Problem we all live with” (1964), depicting Ruby Bridges, the first black child to desegregate an elementary school in New Orleans in 1960.  She faced enormous opposition, of course, as shown by the n-word on the wall, the splashed tomatoes, and the four U.S. Marshals escorting her to the classroom.

There’s an introduction by Bari that includes this:

In the essay below, David French reports on the fallout of these bills in states like Texas and Tennessee, where he lives with his family. It is there that parents have complained about Norman Rockwell’s painting The Problem We All Live With (shown above) which depicts the courageous Ruby Bridges. David suggests that in the attempt to respond to left-wing intolerance the right is creating their own. 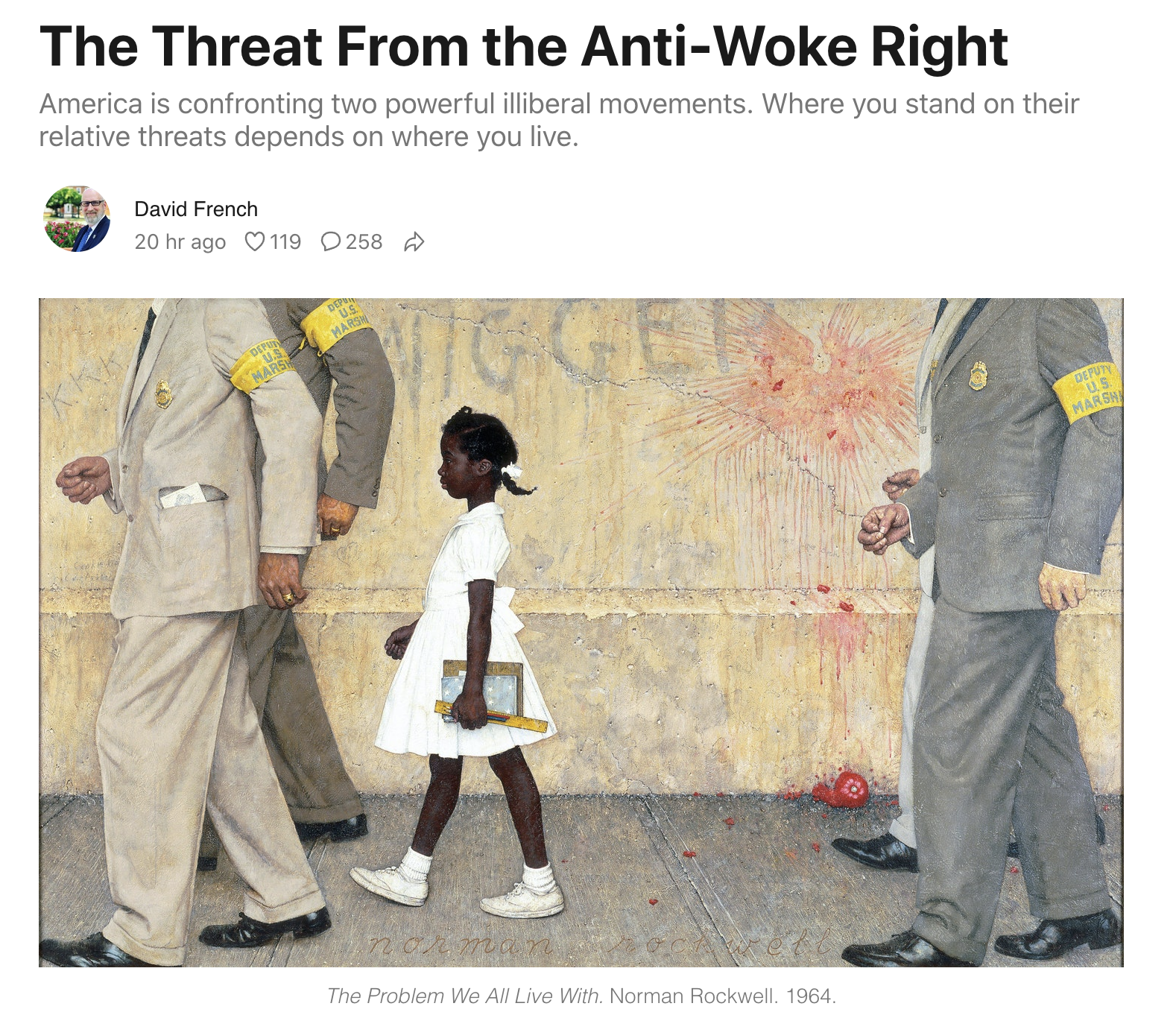 French is a conservative—not just that, but, as he notes, “a pro-life, ideologically conservative Evangelical Christian who upholds traditional church teachings on sex and marriage.”  As he says, he has all the bona fides that should make the Right appeal to him. But it doesn’t, for he sees the Right as illiberal (French, a free speech advocate, was once the president of FIRE):

But something is going wrong on the right. An increasing number of politicians, lawyers, and activists are responding to fears of left-wing intolerance with their own efforts to censor, suppress, and cancel. They’re doing so in different places and different jurisdictions—the very places and jurisdictions where the right is dominant and where, all too often, the echoes of America’s most painful past can still be heard.

The most prominent example of right-wing illiberalism comes from the series of so-called “anti-CRT” bills being passed in legislatures across the country.

According to a Heritage Foundation tracker, the bills have been introduced in more than 20 states and passed in seven. They promise to protect children from a divisive and hateful ideology, but they’re largely a mess. They’re vague and poorly drafted, and they leave teachers utterly confused.

This has led to Right-wing censorship that has gone too far (remember, the Left does this too, but with different books). French mentions that a member of Texas’s House Committee on General Investigating sent a letter to all school districts demanding that they reveal whether they have any of 800 “problematic” books and identify other ones. These are, of course, books that emphasize the more unpleasant aspects of America or American history.

And it also happened in French’s home state, Tennessee:

In addition to the hundreds of books listed in Texas (including “The Indian Removal Act and the Trail of Tears,” “Between the World and Me,” and “The Confessions of Nat Turner”), what other books “might” make students feel discomfort? Our local experience in Tennessee sheds some light.

I live in Williamson County, one of the nation’s most prosperous counties and a bastion of state Republican power. This summer, an activist group called Moms for Liberty filed a formal complaint with the Tennessee Department of Education alleging that four young-elementary books—“Martin Luther King Jr. and the March on Washington,” by Frances E. Ruffin, “Ruby Bridges Goes to School: My True Story,” by Ruby Bridges, “The Story of Ruby Bridges,” by Robert Coles, and “Separate Is Never Equal,” by Duncan Tonatiuh—violated the state’s new, expansive anti-CRT law.

I’d urge you to read the entire complaint. It does not refer to a single example of actual critical race theory. The objection is instead to the effect of photographs and accurate depictions of the Civil Rights Movement. Exposure to these historical details, we’re told, “makes children hate their country, each other, and/or themselves.”

If you think I’m exaggerating, here are some of the objections to “The Story of Ruby Bridges”: “Pages 20-21 show images of white people yelling and protesting with accompanying text, ‘The crowd seemed ready to kill her.’” And: “Pages 12-13 show more white protestors surrounding Ruby and reads ‘Men and women shouted at her. They pushed toward her.’”

To be clear, the complaint is complaining about photographs and descriptions that depict what life was actually like for black Americans living in the Jim Crow South.

The many problems with  “Ruby Bridges Goes to School,” according to the complaint, include “photographs of a neighborhood sign that reads ‘WE WANT WHITE TENANTS IN OUR WHITE COMMUNITY’ and a smiling white boy holding a sign that says ‘We wont [sic] go to school with Negroes.’”

The complaint also takes issue with Norman Rockwell’s painting The Problem We All Live With, which depicts Ruby Bridges walking to school with the “n word” in the background and originally appeared, in 1964, in Look, a general-interest magazine published in Des Moines, Iowa. That’s right: They’re complaining about Norman Rockwell.

These people don’t want to face up to the fact that there are unsavory parts of American history. I shudder now to think how my own secondary-school texts glossed over the problem of civil rights and the genocide of American Indians. French ably defends the view that this history needs to be taught:

Why would parents appeal to a law meant to combat critical race theory to censor deeply troubling but wholly uncontroversial books? Because the law allows them to do just that. It bans any “concept” that  “promot[es] division between, or resentment of, a race, sex, religion, creed, nonviolent political affiliation, social class, or class of people.”

This extraordinarily subjective standard permits parents to object whenever their children express anger or discomfort.

There is no question that stories of American segregation are difficult to hear, but when they read about Ruby Bridges or Martin Luther King Jr., children are reading about national heroes. Consider Rockwell’s painting. That young girl, in all her courage, is an example for us all. And if one doubts the need for instruction about racism, one need only read recent stories from the same school district in the same county. For example, in 2019, the Tennessean reported that white middle school students locked arms in a hallway to form “Trump’s wall” and let only white kids pass.

Appropriately, my friend and William and Mary classmate Jim Batterson, who comments here, just sent me an email and photo when I was writing this. This typifies the everyday racism that obtained in Virginia when we went to school. He was in Newport News, I in Arlington. His class of 550 students had just three African-Americans and two Hispanics. Jim said this (posted with permission):

Here is a pic from my 1966 high school yearbook showing the cafeteria staff. Please notice that all are black with the exception of the cafeteria manager and that all blacks are listed by first name while the white cafeteria manager is given the honorary prefix “Mrs.” and no first name…a sign of respect for an adult. I expect things were the same at your northern Virginia high school. I think this is a good and simple example of racism. I also have a pic of custodial staff that is captioned similarly. 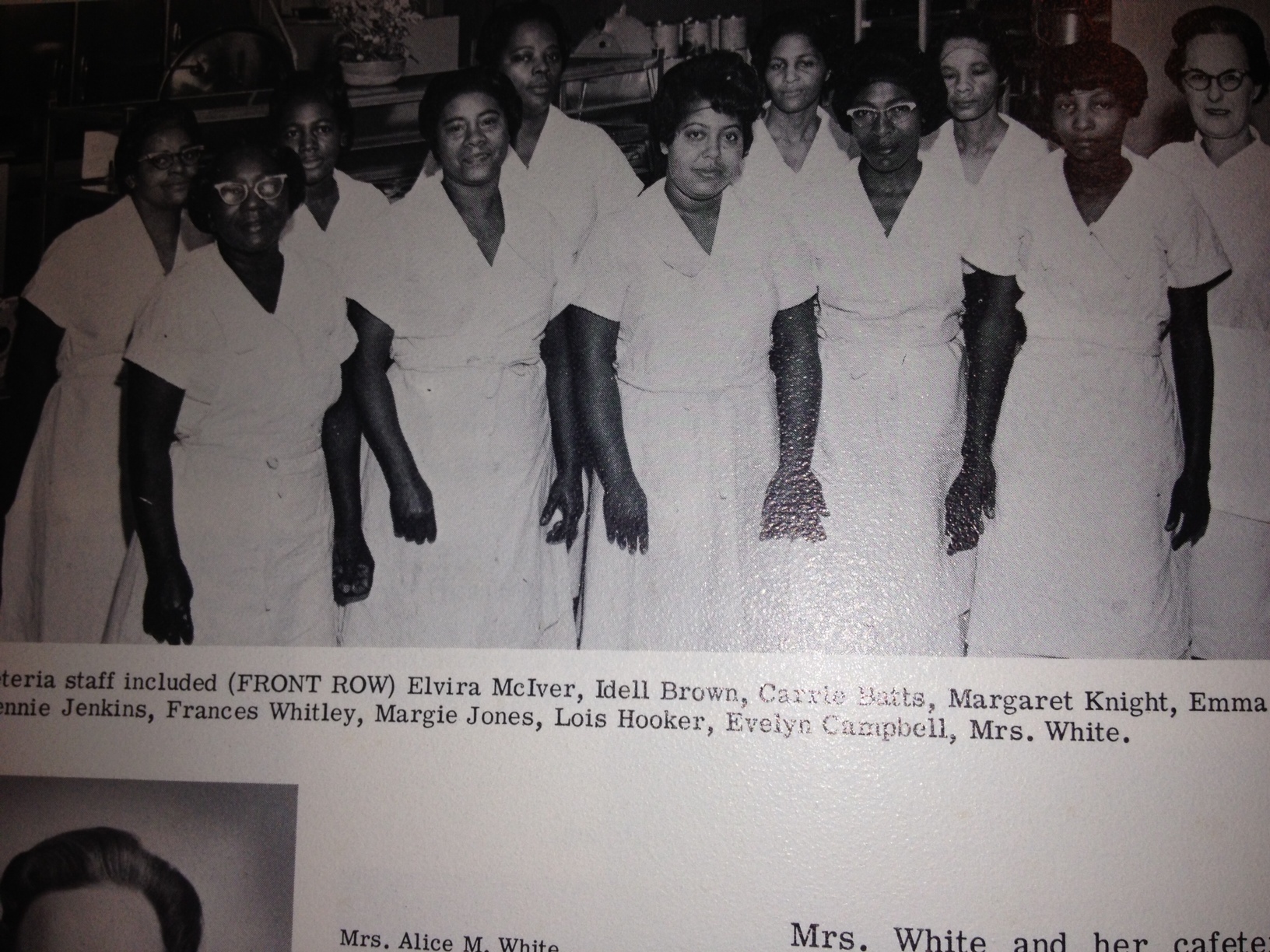 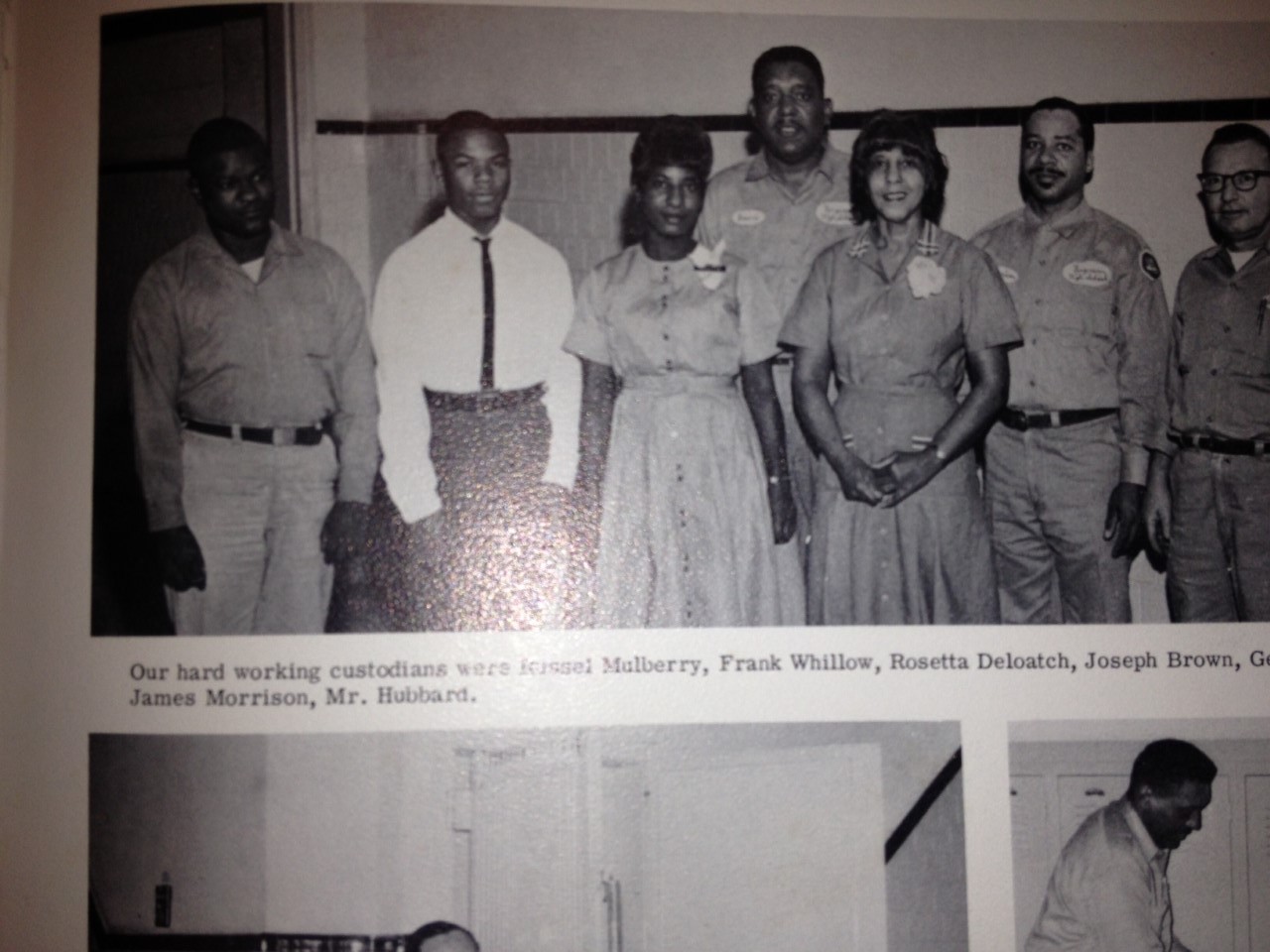 It’s this kind of historical racism that kids need to learn about, and that we can’t let go down the drain because of the “CRT” fracas.  In the end, French also calls out the illiberal Left as well:

America is confronting two powerful illiberal movements, and where you stand on their relative threats can depend greatly on where you live. If you’re a conservative professor or student under fire in the elite academy, the travails of elementary school teachers in a Nashville suburb aren’t much on your mind. You’re fighting for your reputation and career against some of the most elite and powerful cultural forces in the United States.

But if you’re the parent of a black child who comes home in tears explaining that she wasn’t allowed past “Trump’s wall,” if you later witness a member of a school board audience shout “you’re in the South” when another parent laments the omnipresence of Confederate symbols, then the struggles of Ivy League conservatives don’t have much purchase.

And the consequences, which we’ve seen this morning:

But might does not make right, and if we use power punitively, then we create a nation of warring illiberal jurisdictions. Many of the same people who flex their muscles in Red America to pass expansive and vague anti-CRT laws cry foul when Blue America forces public school teachers to use preferred pronouns.

I remember, years ago, when I began my First Amendment litigation career, hearing FIRE’s two founders, Alan Charles Kors and Harvey Silverglate, challenge the idea that Americans were “too weak to live with freedom.” They believed that you trained even young Americans to venture forth in a pluralistic nation with confidence in their ideas and the fortitude to weather dissent.

That means encountering teachers and teaching you may not like. It means encountering words that trigger strong reactions. And, parents, that even means sometimes helping your children learn difficult truths and to question or even unlearn lessons they’ve learned at school. It’s not an easy path, but it’s a better path than the one we’re on now—where scholars are under fire from left and right, and in some schools even Norman Rockwell is out of bounds.

And that is an eloquent ending.