So what if the Times of London is a Tory paper? Gender-critical feminist Professor Kathleen Stock of Sussex needs a stalwart defense and they gave it to her. There was NO defense from the Guardian, of course, just a new article about how Stock’s own union (the University and College Union) is investigating her for transphobia, and that Stock feels that her teaching career is “effectively ended”. The Guardian loves that, and they would get rid of Stock if they had the power. They are reprehensible, especially on issues of freedom of speech.

On October 10, in the Hili News, I summarized the campaign against Stock:

Kathleen Stock, a feminist professor of philosophy at the University of Sussex, is the subject of a cancellation campaign over her views on gender. Wikipedia has characterized her views thusly:

Stock has expressed gender critical views on proposed reforms to the UK Gender Recognition Act and trans self-identification. She has called for trans women who have male genitalia to be excluded from women’s changing rooms, characterising them as “still males” who may be sexually attracted to women. She has denied opposing trans rights, saying, “I gladly and vocally assert the rights of trans people to live their lives free from fear, violence, harassment or any discrimination” and “I think that discussing female rights is compatible with defending these trans rights”.

For this some of her colleagues and students have started a campaign to get her fired, hyperbolically characterizing her as a transphobe whose views cause “harm”:

In January, hundreds of academics criticised the decision to give Stock an OBE for services to higher education in the New Year honours list.

In an open letter, they condemned academics who use their status to “further gender oppression” and said they denounced “transphobia in all its forms”.

The letter said: “Trans people are already deeply marginalised in society, facing well-documented discrimination, ranging from government policy to physical violence. Discourse like that Stock is producing and amplifying contributes to these harms, serving to restrict trans people’s access to life-saving medical treatments, encourage the harassment of gender-non-conforming people, and otherwise reinforce the patriarchal status quo. We are dismayed that the British government has chosen to honour her for this harmful rhetoric.”

This is what happens when you try to philosophically discuss the issues of rights when people are changing genders. The Guardian article reports that Stock is subject to concerted intimidation and harassment. To its credit, the University of Sussex is defending stock’s right to say what she wants, saying it won’t tolerate “threats to academic freedom.” The discourse on gender has gotten so polarized that even talking about it is taboo unless you agree with the most extreme construal of gender rights.

This article from Today’s Times (I have to use a screenshot because it’s paywalled, but click to enlarge) says what I would say: her views are “hardly inflammatory” and “even if Professor Stock held opinions that were less obviously defensible, she would have an unqualified right to express them.” But you can read it for yourself: 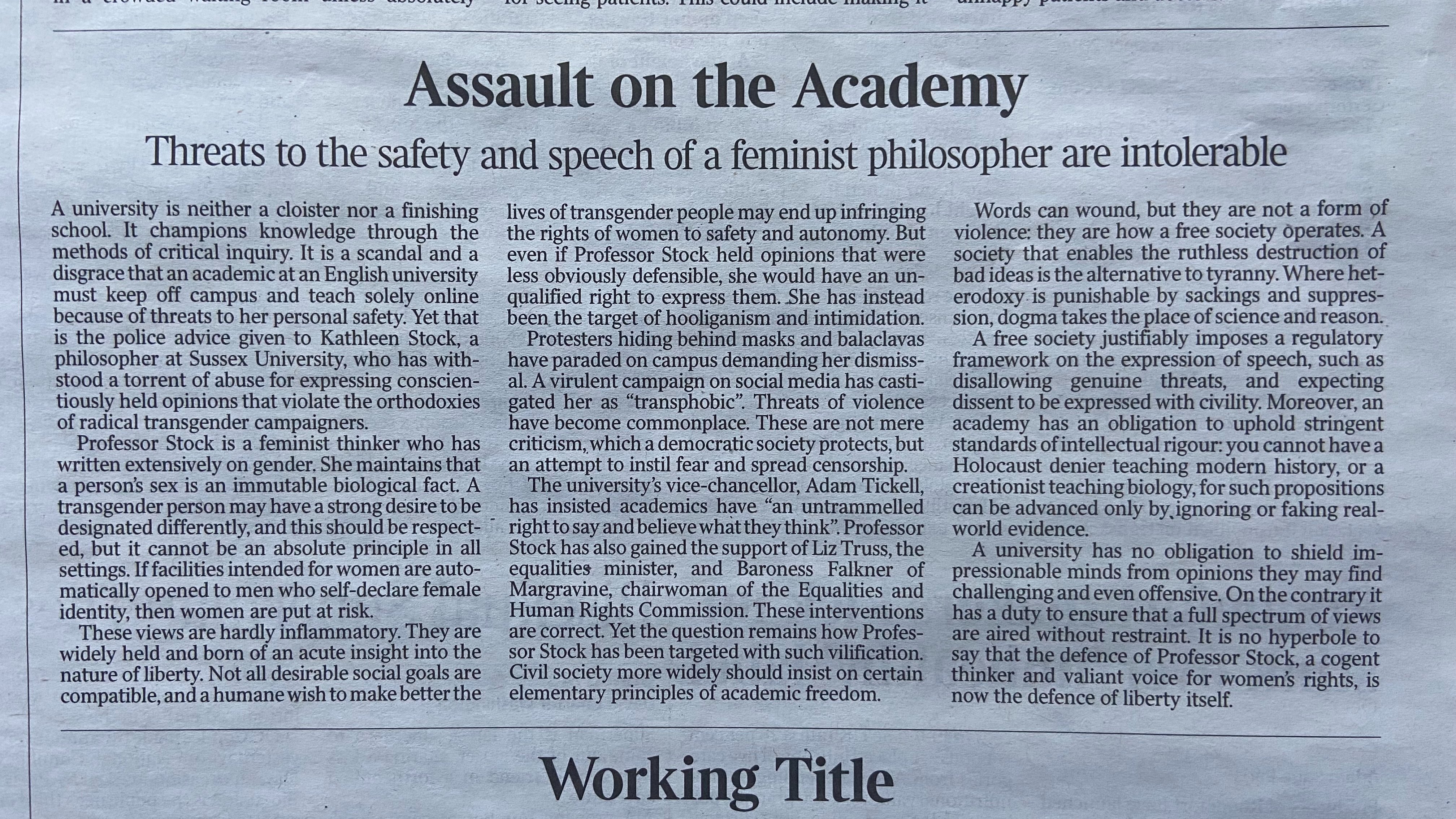 There is of course no constitutional principle in the UK like our First Amendment, but that is no excuse to promulgate censorship in a university. All universities should, I think, abide by the tenets of free expression that the University of Chicago (a private university not required to adhere to the First Amendment) holds as one of its foundational principles.

The Times also recounts the harassment Stock has endured, including threats of violence. She has been advised not to go to campus and to install closed-circuit television in her home. The University of Sussex is still defending her, though hedging it a bit (from the Guardian):

A University of Sussex spokesperson said: “We have acted – and will continue to act – firmly and promptly to tackle bullying and harassment, to defend the fundamental principle of academic freedom, to support our community and continue to progress our work on equality, diversity and inclusion. We care deeply about getting this balance right.

“There are a range of very strong views and opinions held across the university on a whole variety of issues and topics, including how we support our trans and non-binary community particularly at this time.

“As a community, we need to come together and talk about what is happening at the moment and to look at the way forward.

“We will be doing this in the coming weeks and this will be led by our newly appointed pro-vice-chancellor for culture, equality and inclusion.”

Given that Stock is not a transphobe, they should have stopped the statement after the first paragraph.

The Guardian has not and will not defend Stock; they censored one of their columnists for expressing similar views, forcing her to resign. The important thing to remember is that Stock is by no means a transphobe; her views are expressed above and in her Wikipedia article. But because she questions the complete equivalence of transwomen and biological women (ditto for transmen and biological men), she’s being mercilessly hounded. Every university, much less Stock’s own union, should be united in defending her right to express opinions on this matter.

The discussion (or rather, lack thereof) about trans issues has gotten completely out of hand. And so it is up to us to defend whatever views we hold with reason, not with threats, but also to defend the right of our opponents to express their views openly and without fear and intimidation. We should all be behind Stock’s freedom of expression. 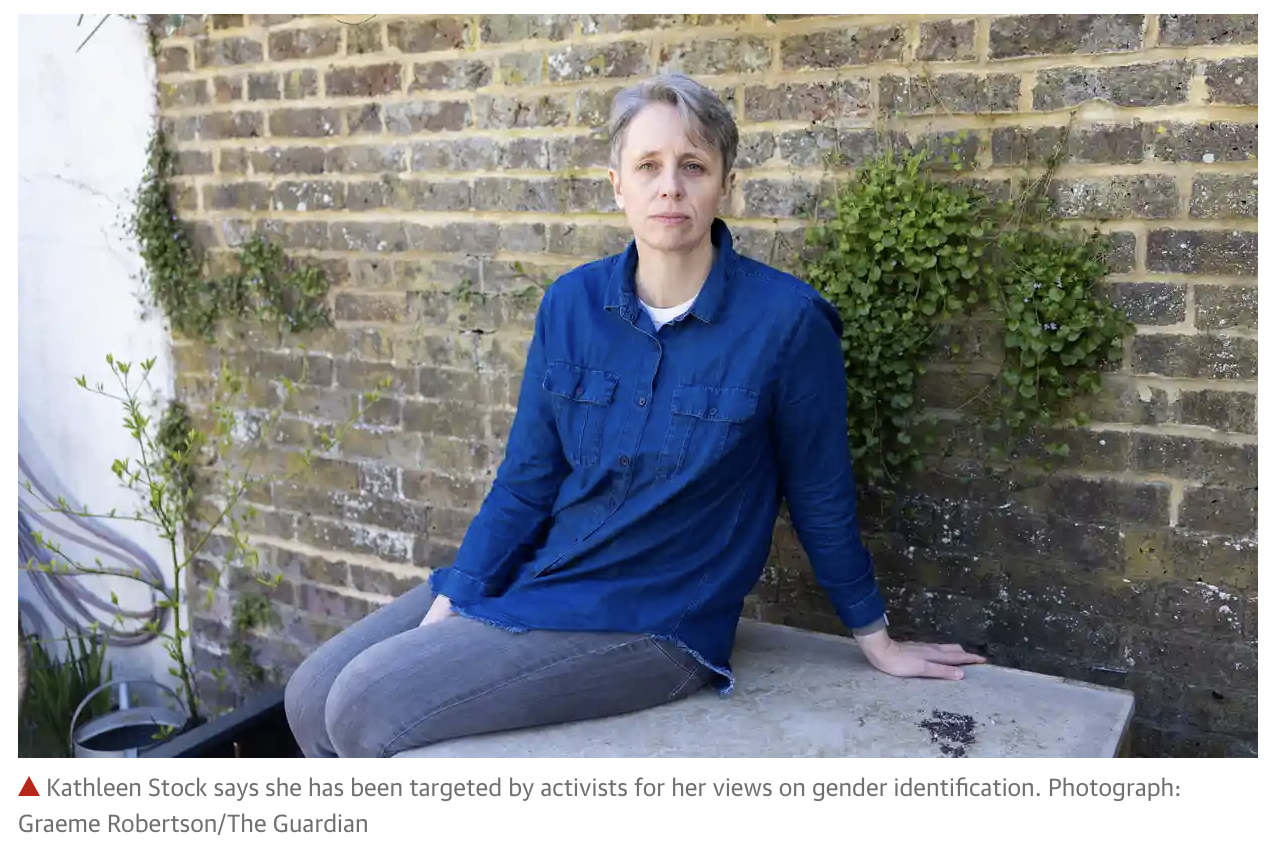 47 thoughts on “The Times of London defends Kathleen Stock’s freedom of expresson, and so should we”