Good morning on the dawn of the week’s worst day: Tuesday, October 5, 2021: National Apple Betty Day (the dessert used to be called “Brown Betty“, but you can guess why that’s gone, though it’s still widespread on Internet recipes and has an entry in Wikipedia as well as a discussion of the origin of the term.

*First, the Nobel Prize in Physics has been announced:

“for groundbreaking contributions to our understanding of complex physical systems”

with one half jointly to

and the other half to

Don’t ask me; this is way above my pay grade. And none of those who guessed in physics yesterday were correct.

*As everyone in the world knows, Facebook and its subsidiaries, Instagram and WhatsApp were down for five hours yesterday, and worldwide. Nobody knows what happened, but experts on the news last night said they’ve never seen anything like it. (I suspect the conspiracy-minded suspect a cyber attack.) The remarkable thing to me was how newsworthy this was: it was the lead story on last night’s NBC News and is the lead story (upper left on the NYT webpage; see below). It’s just social media, people! Why does the world get discombobulated when these sites are down for five hours? I guess I’m just an old man shouting at the clouds.

*The bigger story, which hasn’t been fully verified since it involves about 12 million documents known as “The Pandora Papers” (!), is that world leaders and celebrities are stashing their dosh in offshore havens to avoid taxes and to engage in other sleazy activities, largely in America. As The Wall Street Journal reports:

Wealthy individuals around the globe have used offshore tax havens to conceal their financial activities, creating shell companies, foundations and trusts to purchase real estate and other luxury goods, and in many cases, avoid paying taxes, according to an expansive new report.

The report, released Sunday by the International Consortium of Investigative Journalists, named dozens of current and former world leaders and hundreds of politicians, public officials, billionaires, religious leaders and celebrities. It said many used offshore tax havens to evade taxes, and some were linked to financial crimes like money laundering.

It is generally not illegal to hold offshore assets or use shell companies for business, the report said. “But these affairs often amount to shifting profits from high-tax countries, where they are earned, to companies that exist only on paper in low-tax jurisdictions,” it said. “Using offshore shelters is especially controversial for political figures, because they can be used to keep politically unpopular or even illicit activities from public view.”

Among those alleged to engage in these activities are Vladimir Putin (of course), Tony Blair, King Abdullah II of Jordan, Elton John, Ringo Starr, and—can it be true?—Shakira.

*The government is still balled up with “progressive” vs. more centrist Democrats unable to resolve their differences about Biden’s two spending bills. Every day I look for progress and compromise, but I see none. As Vonnegut said, “so it goes.”  But the rancor has now spread into unacceptable territory. You may have heard that Senator Kyrsten Sinema, one of the two contrarian Democrats, was followed into the bathroom at the University of Arizona (where she teaches a class) and hectored outsider her stall for her failure to back Biden’s $3.5 trillion social spending bill.  You can see the video here. I find the protestors’ behavior repugnant, though I’m not a big fan of Sinema. A person needs their privacy!

Jezebel, however, thought it was great:

*A NYT op-ed by Donald Ayer (a U.S. attorney who was in the Dept. of Justice during the Reagan and W. administrations) pulls no punches; its title is “The Supreme Court has gone off the rails“, and it’s apt. We have an “activist court”, once decried by Republicans, but this time it’s Republican activism by conservative judges. An excerpt by Ayer:

My concerns about what the Supreme Court might do now are fed by its actions in the recent past. Last term was marked by a number of radical departures from precedent and existing law to elevate certain constitutional rights of individuals in a way that can stop government at all levels in its tracks.

Perhaps most unexpected and disturbing were decisions elevating rights of religious assembly over local public-safety rules related to Covid-19 that limited the ability to gather. Yet throughout our history, in matters of public health, the powers of local government have usually been at their apex. That did not matter here — nor did the fact that Chief Justice Roberts was among the dissenters.

Buckle your seat belts; it’s going to be a bumpy session.

*And another NYT piece asks the question, “Did death cheat Stephen Hawking of a Nobel Prize?” It’s worth reading, as it describes the predictions that Hawking made about black holes, including the fact that they would always grow larger and never get smaller, swallowing up, and hiding forever, more and more stuff. These predictions were empirically verified only after his death, making him ineligible for the Prize. Several scientists weigh in on whether he might have gotten it had he lived.

*Speaking of Nobel Prizes, the NYT collects eight scientists’ recollections about how they received that early-morning phone call from Stockholm. After you get that call, your life will never be the same. (I wouldn’t know, but that’s what they say. . .)

Stuff that happened on October 5 includes:

This kick-off of the Revolution began when women in the Market that morning rioted about the high price and scarcity of bread. They marched to Versailles and were joined by men spoiling for revolution. Here’s a contemporary illustration: 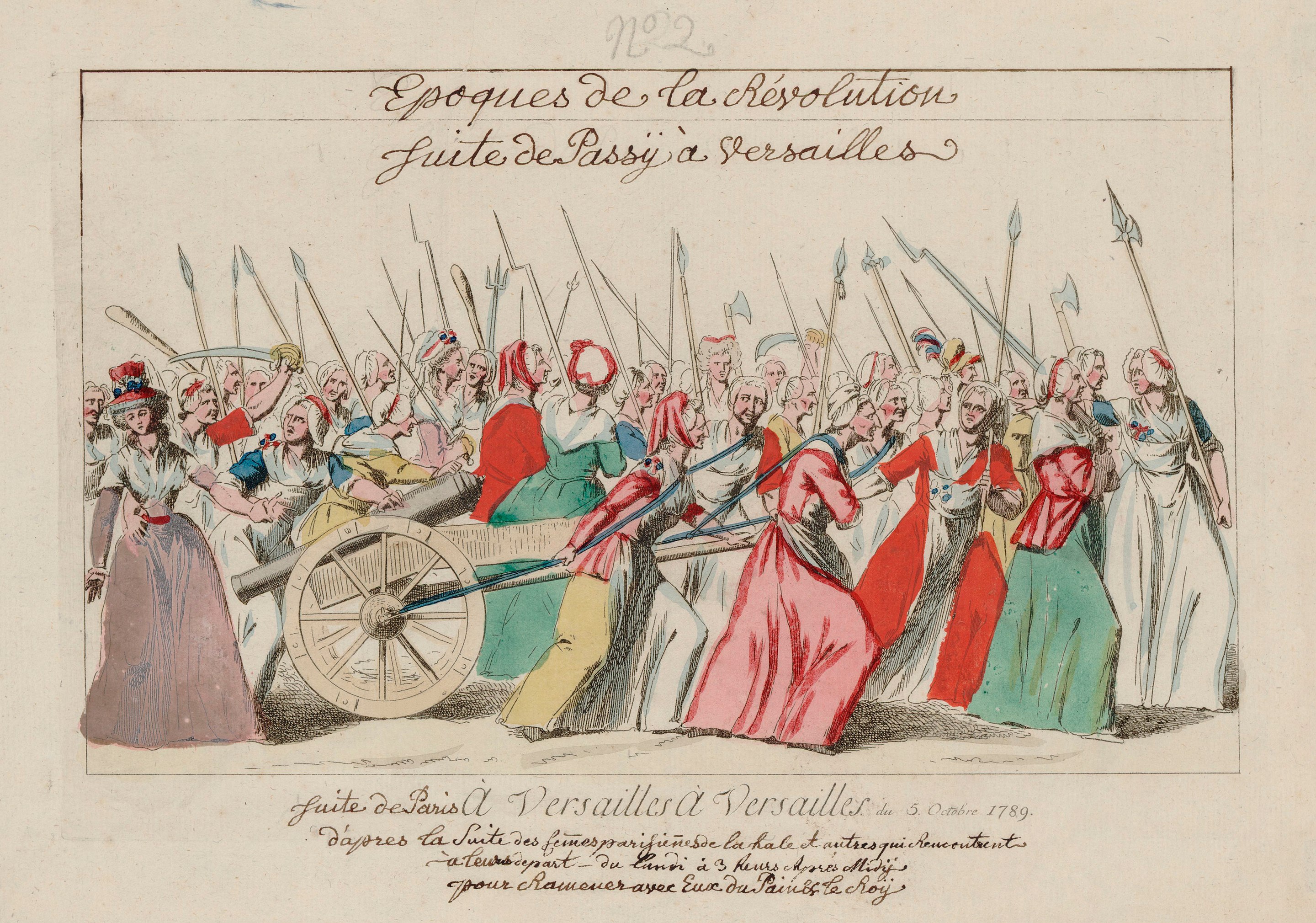 Here’s a photo of the flyer with the front of the aircraft at the top. The Wikipedia caption notes this:  “Front in-flight view of Wright Flyer III during its 46th flight (which was the last photographed flight of 1905); Huffman Prairie, Dayton, Ohio, October 4, 1905.” That was a day before the world record flight.

Here’s a wall poster from 1942. My translation: “Whoever wears this mark is an enemy of our people.” “Jude” of course, means “Jew,” and this is the Star of David required to be worn by all Jews. 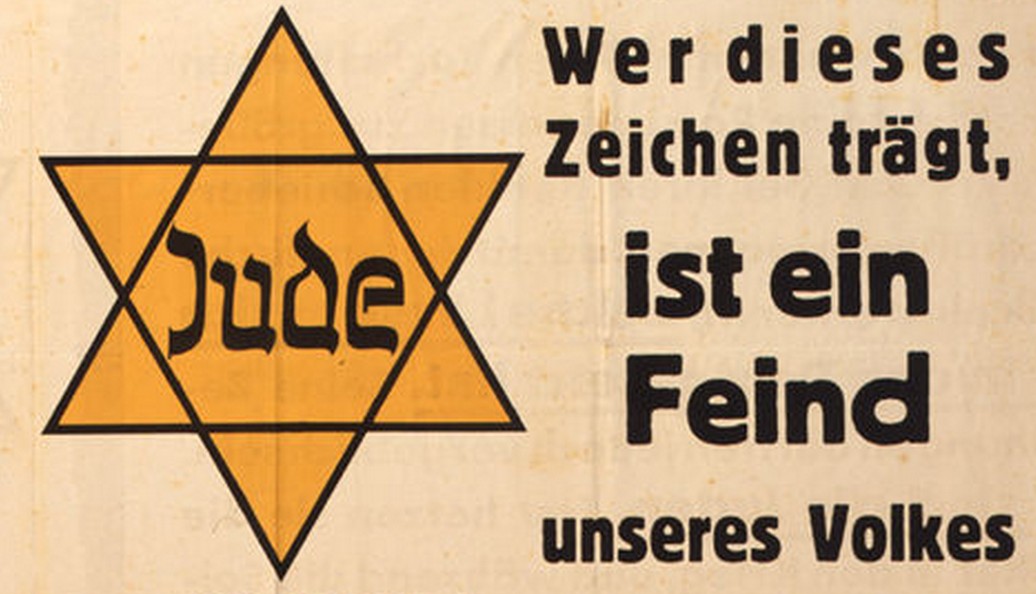 I can’t find that footage, but he made the first televised State of the Union address earlier: on January 6, 1947. Here’s a news snippet from that:

Can you remember the first “Bond Girl” is that movie? Answer at bottom.  Here’s a Japanese poster for the movie with a clue: 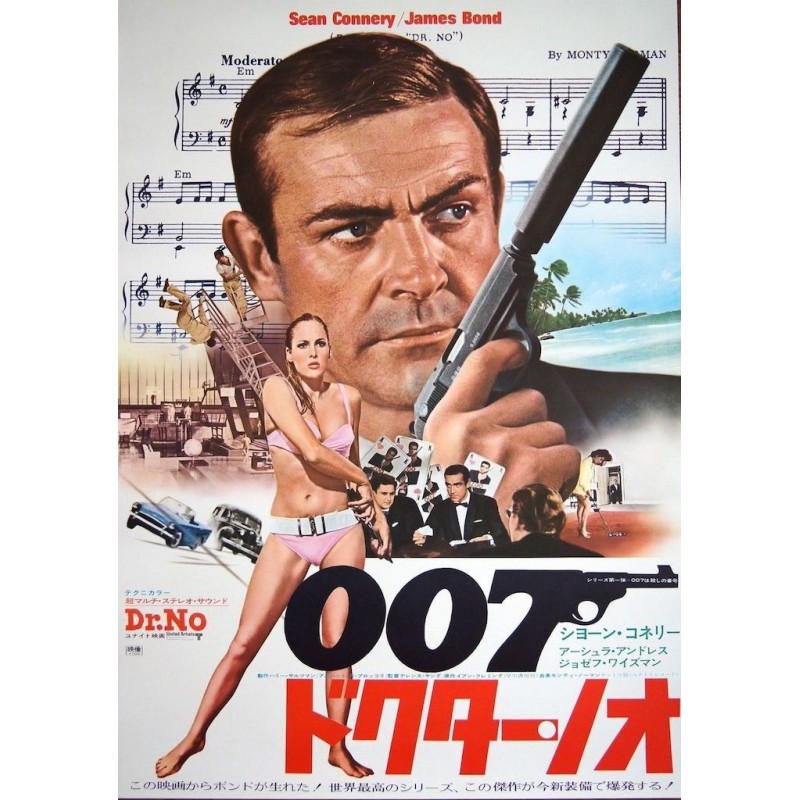 There were several suspects, but nobody was ever charged with or convicted of these seven murders.

Rous (below) was one of the microbiologists used as a model of a good scientist in Sinclair Lewis’s novel Arrowsmith (the only decent novel about a scientist). He won the Prize for discovering that viruses could cause cancer: 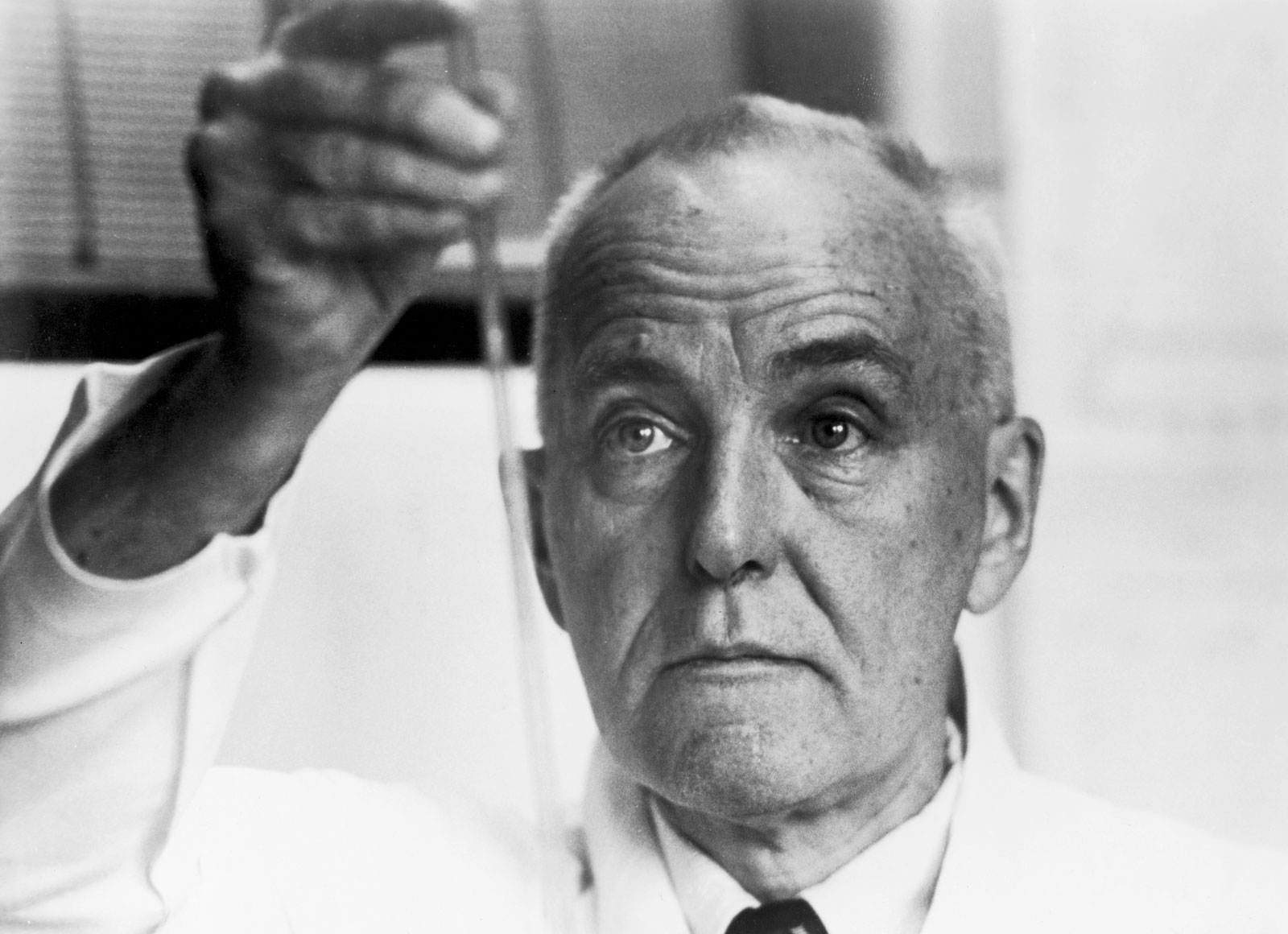 A Stooge and a burger magnate born on the same day!

Unsoeld, a great climber, was one of the members on the first American team to summit Everest (1963). He lost all of his toes from frostbite on the descent but continued to climb afterwards with special shoes. He named his daughter “Nanda Devi Unsoeld” after the fabled Himalayan Peak, and, tragically, she died trying to climb that very peak at the age of just 22. Her father was on that expedition, and I’ve linked to his account, which is heartbreaking. Here are the pair: 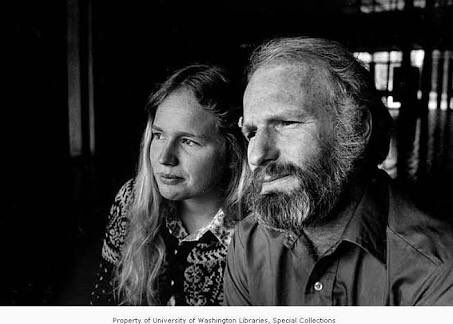 Eisenberg was on Team Cat with me at the New Yorker Festival’s “Cats vs. Dogs” debate in 2014. He couldn’t be there, but submitted this video as his entry (we each had to make the case for our animal). It’s hilarious; watch it! (Team Cat still lost, though.)

Those whose made their egress from life on October 5 include:

They don’t mention that Brandeis was on the Supreme Court! He was also the first Jewish Justice (photo below): 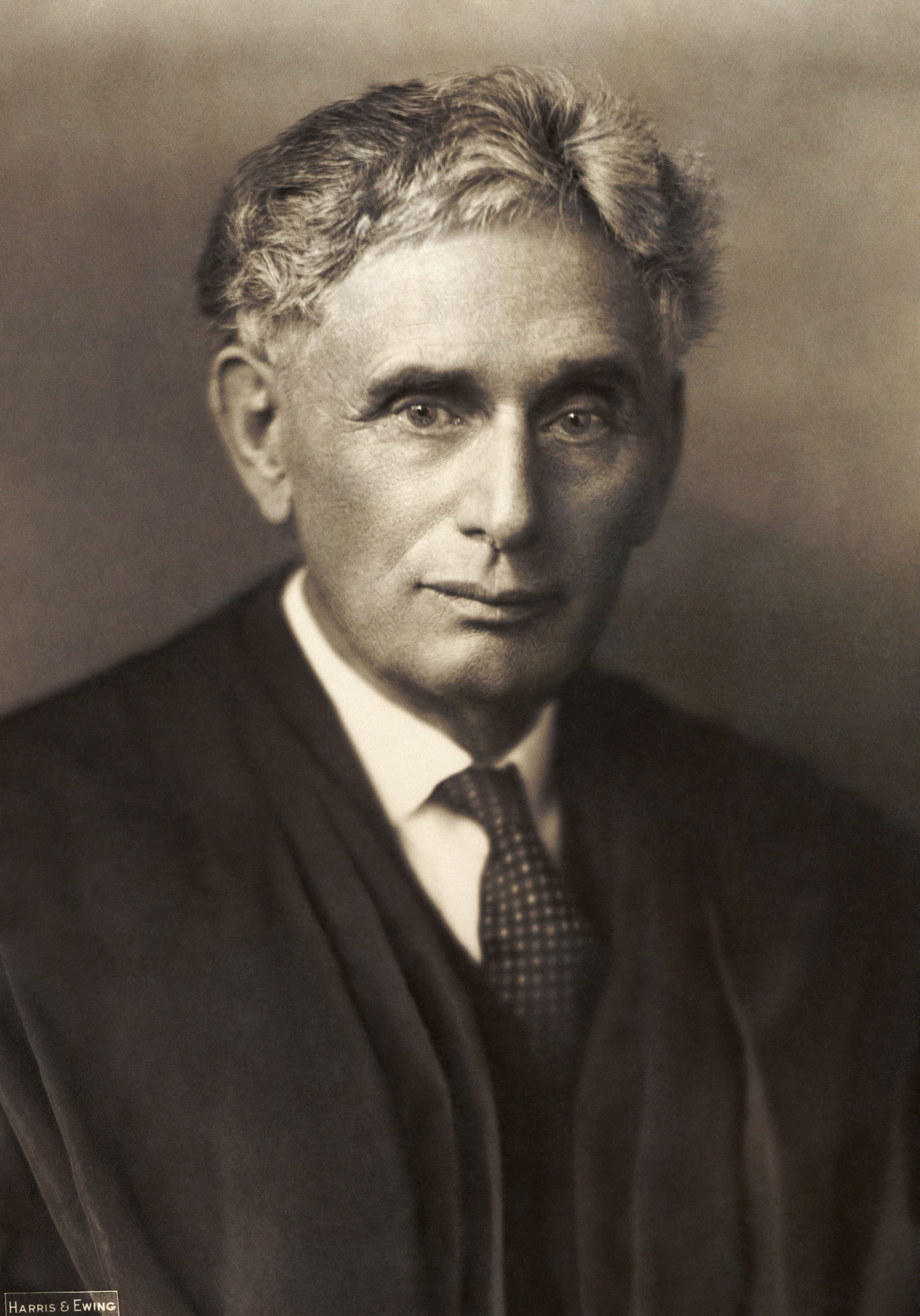 Onsanger shared a bathroom with me when I was a beginning grad student at Rockefeller University. When my girlfriend visited, he reported women’s lingerie in the joint bathroom, and that’s what got me kicked out of the dorms. But I had to look at his false teeth in a glass every morning!

I was a big fan of Jansch. Here he is live on Danish television in 1984:

Meanwhile in Dobrzyn: Hili is bored:

A: What are you thinking about?
Hili: I’m looking for inspiration. 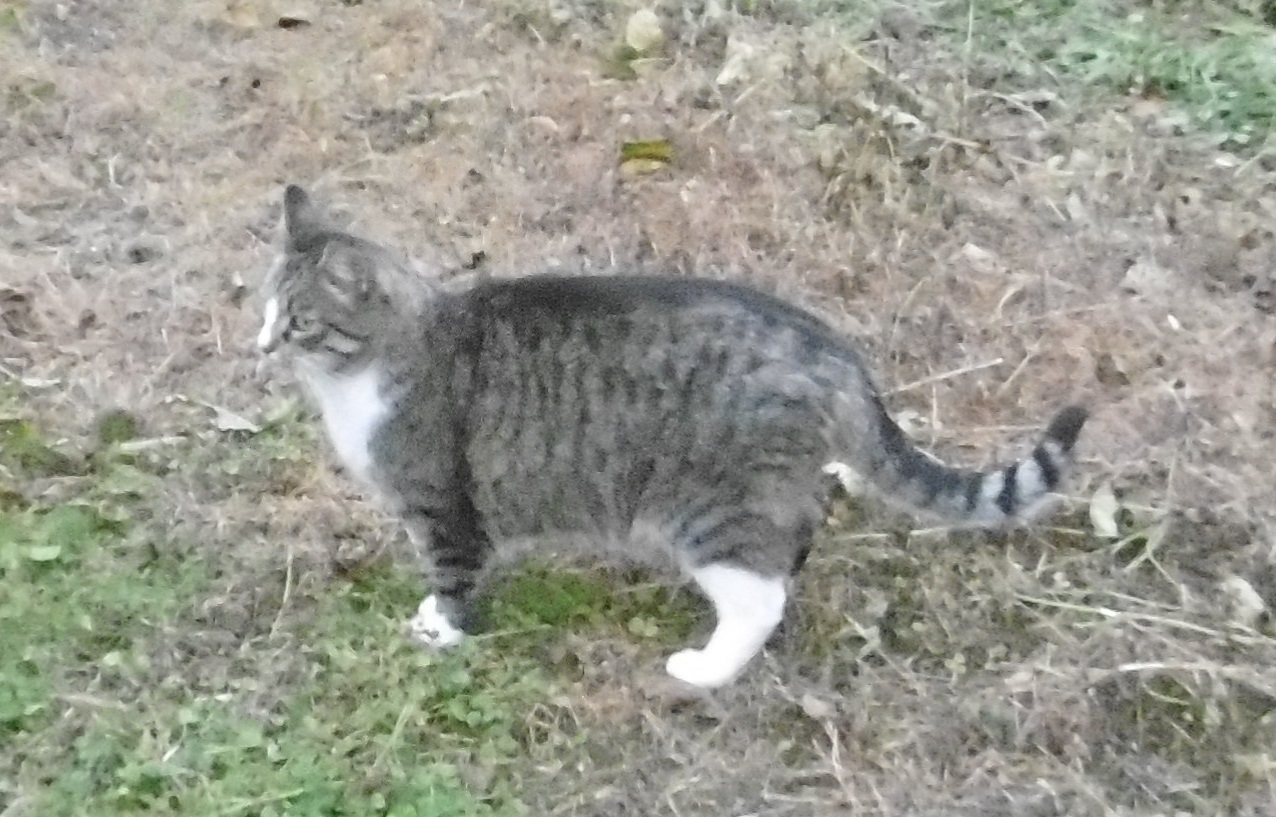 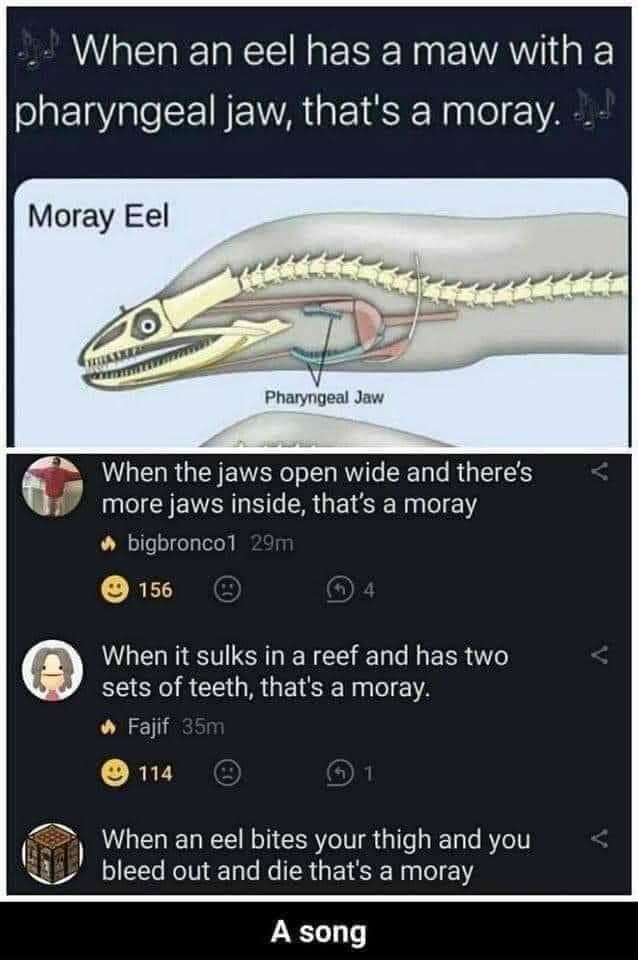 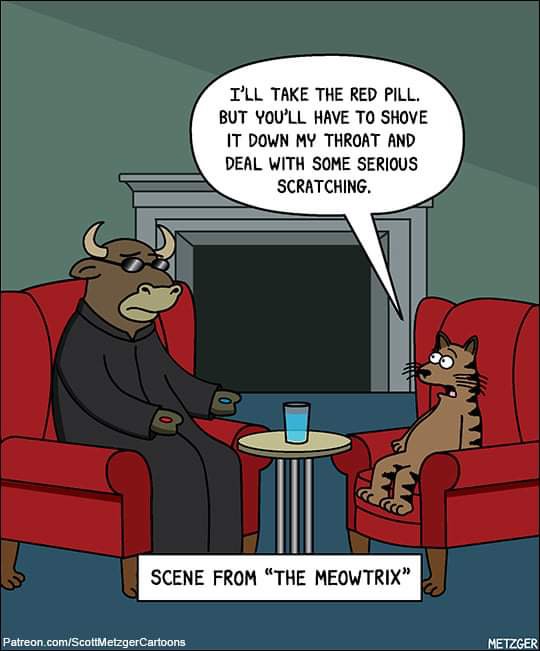 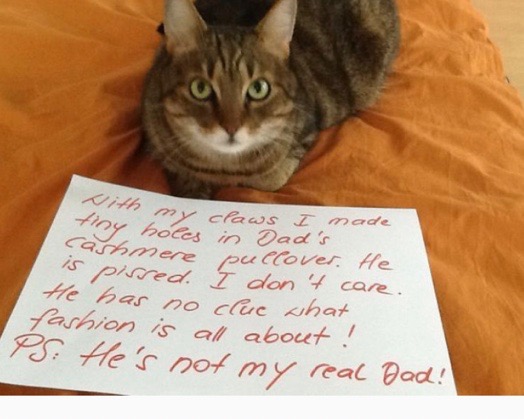 A tweet from Masih, showing that the nonsense continues in Iran:

I received this video from Iran today. Morality police stopped girls because they were riding bicycles. In Iran, the regime doesn't let girls ride bikes in case it arouses men!

Meanwhile, ordinary men come to the rescue of these girls in solidarity#MyCameraIsMyWeapon pic.twitter.com/AS0DfiB5A2

From the Auschwitz Memorial, a man who lived less than a month after arrival:

Tweets from Matthew.  The first is true—the conservative county is looking into LEGAL implications of stocking those books. That said, do you think that library shelves should be open to kids of every age, and that they should be able to check out any books they want?

The best whale fossils are found in the desert.  This is a good one:

There is no good outcome of this:

A drone show goes badly wrong in China. The explanation in the tweet below appears to be bogus, but the drone cock-up is real. VICE has the article, which notes:

It’s unclear what exactly caused the accident. An organizer told China News Services that “operation errors” might have led to the fall, and no injuries had been reported.

Several other accidents have occurred at drone shows across China. In January, a group of drones crashed onto a building and then fell off during a test run in the southwestern city of Chongqing.

Lesson: Don’t believe “the word on the street”, especially if it’s on Twitter.

Drones raining from the sky in Zhengzhou 😬

Word on the street is that a rival drone company that lost the bid interfered to overwhelm the drones nav system!pic.twitter.com/MukM8PjJJr

This is the most bizarre thing ever. Read the tweet, then watch the video, and then read the fascinating Washington Post article about this man and his bird wife. Bird thinks keeper is a male bird, kills real male birds, and so the man has to pretend to copulate with the crane while at the same time inseminating her artificially with crane sperm. What a job!

Answer to “Dr. No” question. The first “Bond Girl” was Ursula Andress: 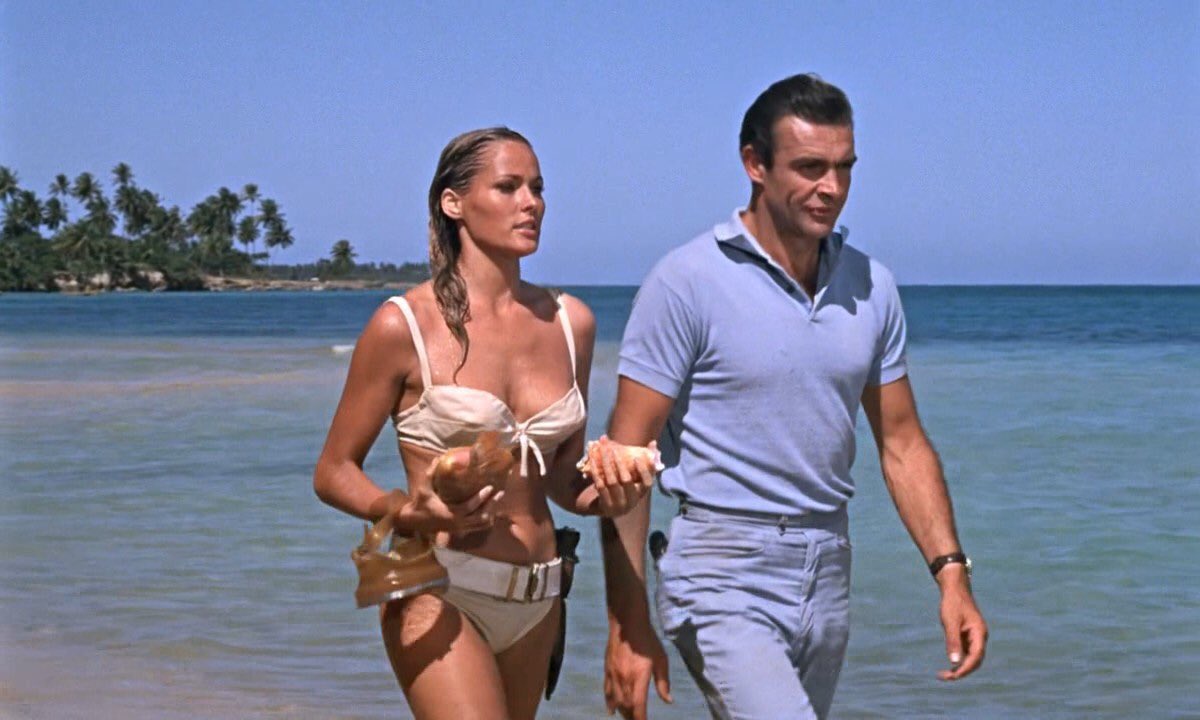