Starting today and extending for a week, we’ll have a Nobel Prize awarded every weekday. The Physiology or Medicine Prize was announced this morning in Stockholm, and so two investigators will have been woken up early but will be very happy. Here they are with some info from the Howard Hughes Medical Institute (I’ve added links):

David Julius [left below], a professor at the University of California, San Francisco and a Howard Hughes Medical Institute (HHMI) Trustee, and Ardem Patapoutian [right], an HHMI Investigator at Scripps Research have received the award for their work identifying receptors on sensory neurons that give us the ability to monitor temperature, pain, touch, and movement of our body. 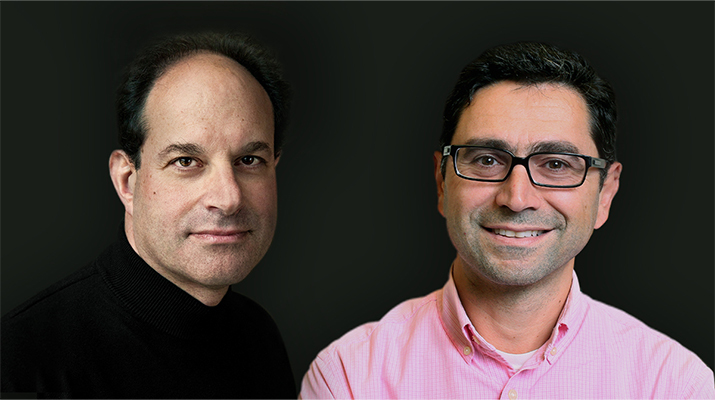 The prize was announced here and the explanation of what Julius and Patapoutian found is here or at the HHMI site.  Trigger warning: Hot peppers are involved! Here’s the official announcement (32 minutes), which gives the names and explains the discoveries as well with the explanation beginning at 2:23.

Just in! New medicine laureate Ardem Patapoutian and his son Luca, watching the #NobelPrize press conference shortly after finding out the happy news.

Stay tuned for our interview with Patapoutian coming up soon!

Because the biology prize was announced already, it can’t be part of our annual contest to “Guess the Laureates”. Since nobody ever wins that one, I’m making it easier this year.

Look at the announcements below, and then guess the names of ONLY THREE LAUREATES, one from each of three of the five categories of your choice: physics, chemistry, literature, peace, or the economics prize. If there you have multiple guesses in a category, you can guess only one recipient.

Remember: just give me three names and the area in which each is supposed to win.

If you guess a name after the prize is awarded, your entry doesn’t count. So if you’re guessing in physics, your deadline is this evening, and so on.

If there is more than one winning entry (all three guesses correct), we will have a raffle for the winner. The Coyne Prize is, also as usual, an autographed copy of one of my two trade books (WEIT or Faith Versus Fact), with a picture drawn in (by me) of an animal of your choice.  I suggest that you enter (in the comments below) by the end of today.

Here’s the schedule of announcements from the organization itself: