Although Darwin himself drew a bit of a distinction between natural and sexual selection, the latter is really a special case of the former. Sexual selection is simply natural selection among individuals for their ability to acquire a mate: one of many behaviors that determine how many genes you leave behind. And there are cases in which it’s hard to determine which form of selection is going on. If a male’s sperm swim faster than the sperm of other males in a species where females are multiply inseminated (e.g., fruit flies), is that male experiencing positive natural selection or positive sexual selection?

Well, the details don’t matter so long as we keep track of what’s going on. In a new paper in Nature Communications, also summarized in a short News and Views in Current Biology, a group of investigators demonstrate how sexual selection can conflict with other forms of natural selection. The experiment was hard and laborious, but the results can be conveyed simply, and I’ll try.

I’d suggest that if you read one of the two articles, it should be the second, as it’s shorter, written for a less specialized audience, but nevertheless an accurate summary. But if you want the original paper, click on the screenshot below or get the pdf here.

To read the Current Biology precis, click on the screenshot below or get the pdf here.

We begin with a sexually dimorphic beetle (below), Gnatocerus comutus, the “broad-horned flour beetle” that’s a pest in grain silos.  As you see, it’s sexually dimorphic, with males having bigger heads and, notably, a huge pair of mandibles (arrows). The females lack mandibles. That’s a hint that the mandibles aren’t used for defense against predators or for predation, but are used in male-male competition for females (if they helped procure prey or fight off predators, the females should have them, too). And indeed, that’s exactly what the mandibles are used for. 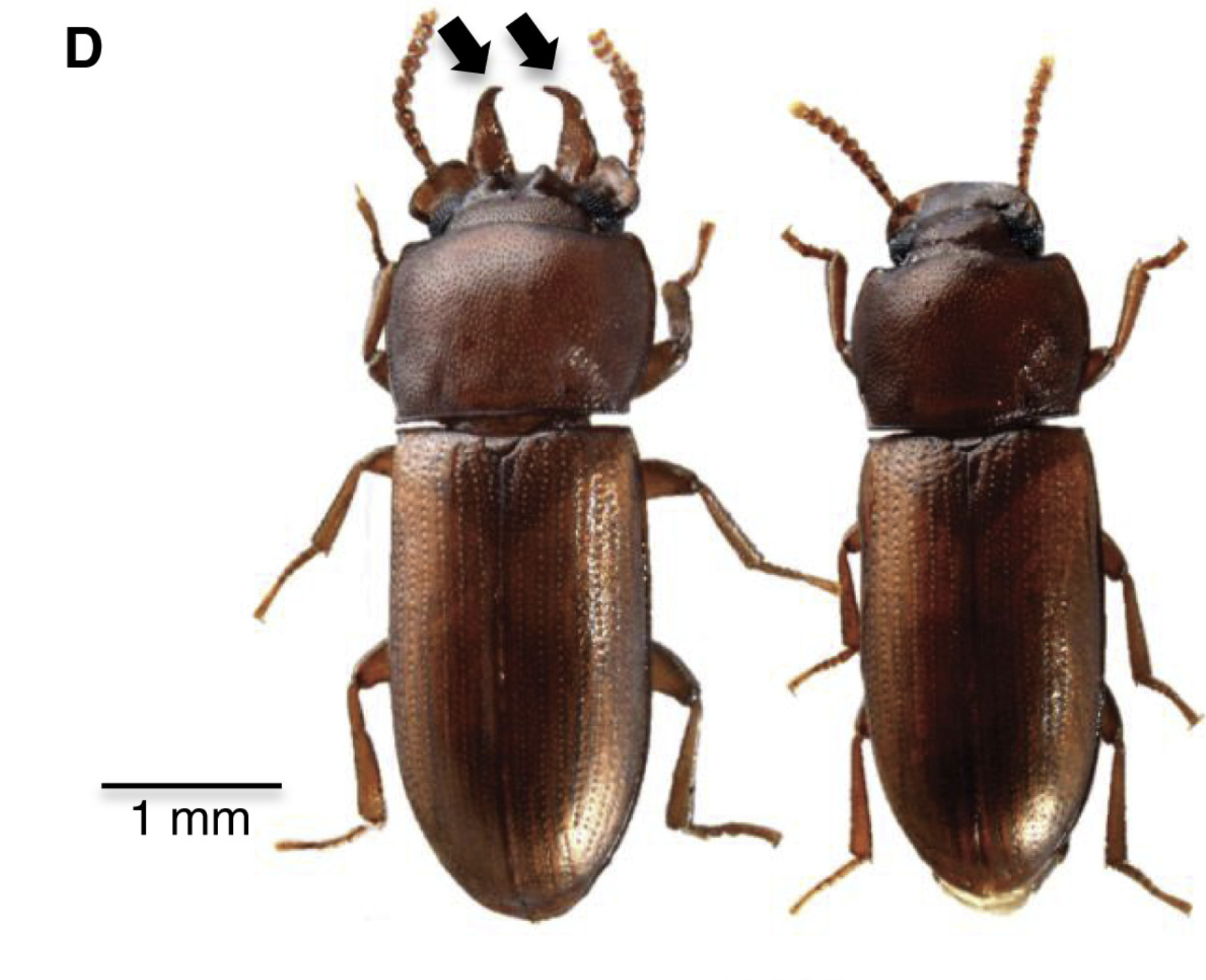 A prediction from this difference is that there is a metabolic cost to growing those mandibles, and although males with mandibles have higher overall fitness, if you could remove male-male competition, the mandibles wouldn’t give you a selective advantage. In that case they would be selected to evolve a smaller size as the resources used to grow them could be directed at other aspects of fitness. Every time you see a case of sexual dimorphism involving a cumbersome or conspicuous trait, you can predict that that trait has a cost, and is involved in sexual selection (the male peacock’s tail is the classic example).

The authors of the first paper did a clever experiment. Instead of removing male-male competition (you could do this by pairing one male with one female for generations; I predict the mandibles would get smaller), they exposed the males and females (separately) to a vicious predator, the assassin bug Amphibolus venator, which doesn’t regularly prey on G. comutus in nature but will eat anything it encounters.

Here’s the assassin bug confronting its potential prey (from the Current Biology paper): 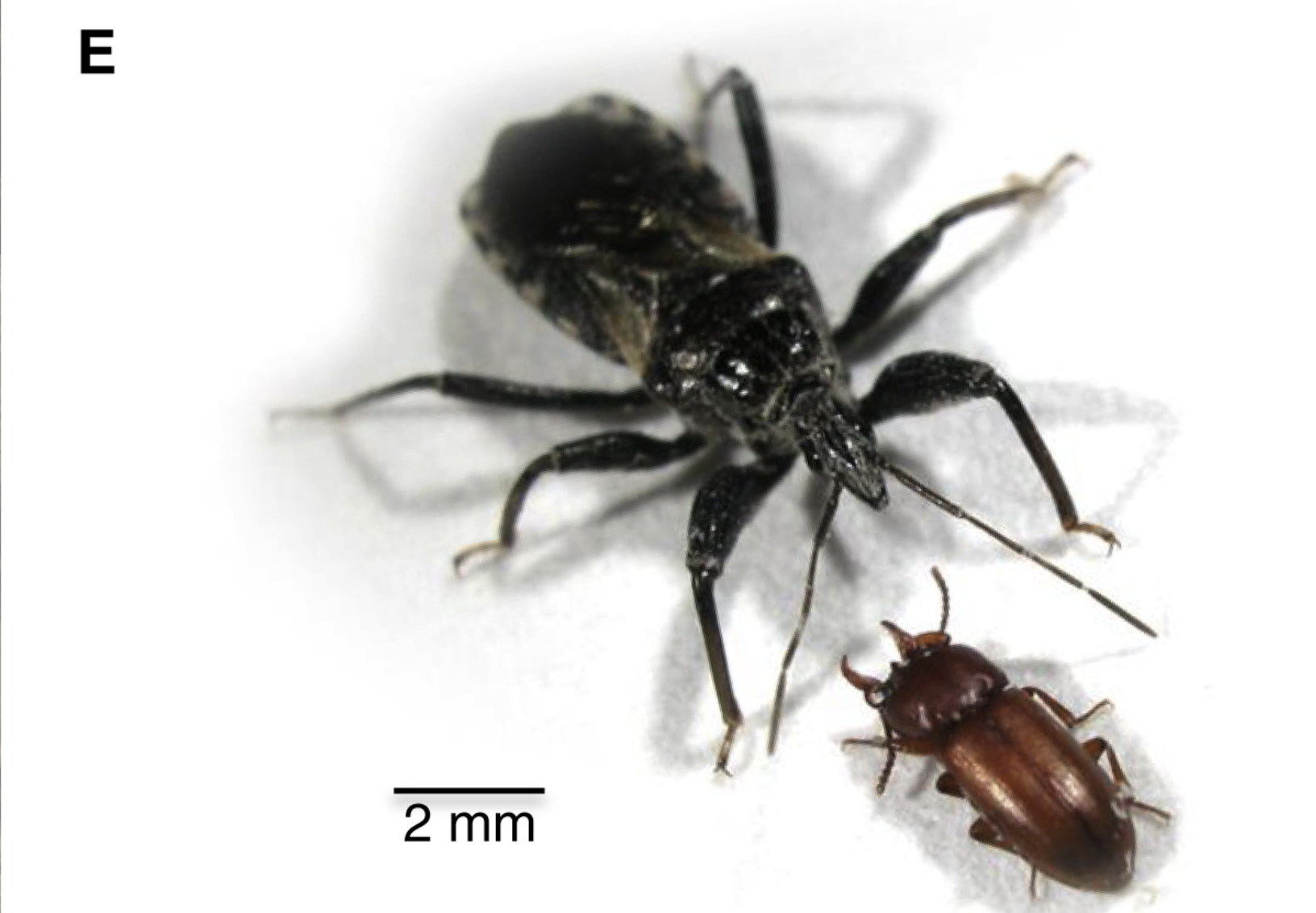 First, over 7 generations, with the males who escaped predation mated to control (unselected) females, the offspring of the escaping males evolved a smaller size. Clearly they weren’t defending themselves against predation from the assassin bugs; rather, the mandibles appear to have been an impediment to survival. The authors suggest that they’re heavy and impede the mobility you need to escape predators.

And, as expected, those small-jawed males whose descendants survived 7 generations of predation lost out when allowed to compete with regular males for females: they won contests only half as often as males from control treatments or female-only predation treatments. Jaws matter at mating time!

What was not expected was that the female descendants of the predated males actually got fitter.  Why? Because their abdomens got larger, possibly enabling them to produce more eggs. (An alternative is that females’ sperm storage organs got larger, enabling them to store more sperm.) But why would this happen? Probably because there is a genetic correlation between male mandible size and, in females, either abdomen or sperm-storage organ size, so if you make the former smaller, the latter get bigger. There’s independent evidence for this. (We don’t know about the developmental pathways that connect male jaws and female abdomens.)

What this shows is not only the cost of sexual selection, but a cost that’s levied in both males and females. If there were no male-male competition, and males had small mandibles, females would leave more offspring.  You might ask, then, given that there are of evolving mandibles paid by both sexes, why do males still evolve large jaws?

The answer must be that the genes that increased male mandible size in the past still had a NET advantage over genes for smaller mandibles. In other words, their cost in reduced ability to escape predators and reduced female offspring number was more than offset by the advantage of winning contests for females. This shows that fitness increases in one sex (the larger mandibles that evolved in males) can be paid for by fitness reductions in the other sex as well (reduced reproductive output of smaller-bellied females).

And so Nature has woven a tangled web here, but one somewhat untangled by the tedious but revealing experiments of the researchers who wrote the first paper.

12 thoughts on “Sexual versus natural selection: a case in beetles”