Andrew Sullivan is no lover of Trump, nor, I think, are many people here. But it behooves us liberals to ensure that he doesn’t make a comeback. I think that unlikely, but others differ. One of them is Andrew Sullivan in his column this week, concentrating on the issue of immigration (click on screenshot, but subscribe if you read frequently). You can read his argument by clicking on the screenshot below.

Before we begin, let me recommend again Sullivan’s new book, Out on a Limb: Selected Writing, 1989-2021. The selections range from very short to quite long, and some of them are really great essays. His arguments for gay marriage, for instance, instrumental in moving the country towards recognizing that institution, are heartfelt and persuasive. He offers an apologia for his support of the Iraq war, trying to explain where he went wrong, and, presciently, predicted Obama’s victory well before the election. His essay “We all live on campus now” was also prescient, and there are various miscellaneous pieces like a good essay on “What’s so bad about hate?” The pieces go up to February of this year with discussions of gender issues and “the whiteness of the classics.” If you don’t like an essay, just read the next one. There’s something here for everyone. It’s also quite personal in places, as when he recounts his bout with HIV and how it changed him. 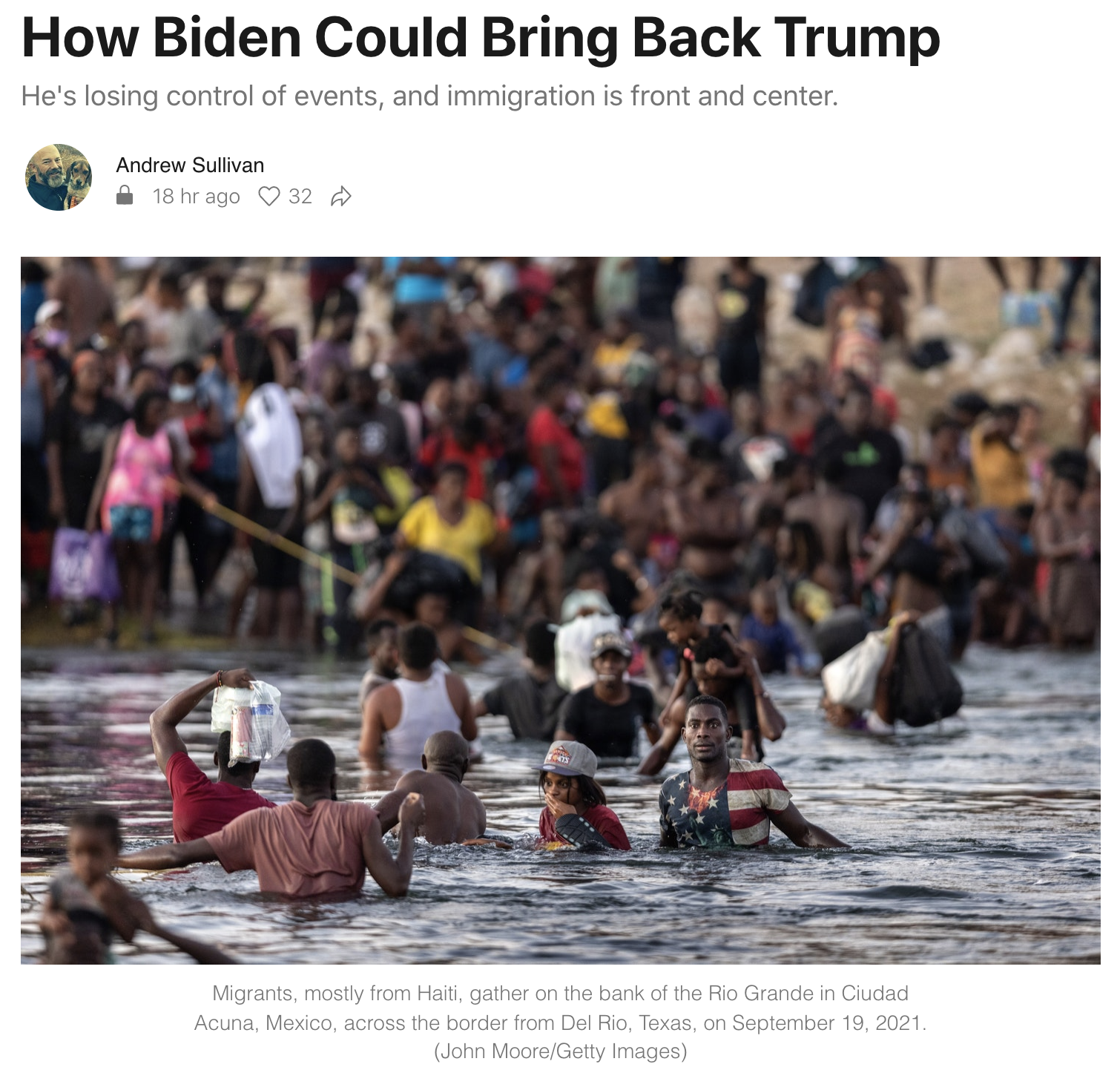 The elephant in the room—the one factor that may be fatal to Biden’s reelection while energizing Trumpists, is, claims Sullivan, immigration. No liberal wants to come out explicitly favoring immigration limits (it’s been discussed very little lately, though 400,000 immigrants are predicted to pass through the southern border of the U.S. this October), as that sounds inhumane. Nevertheless, we have to take into account three issues. As Sullivan says, they’re not all Biden’s fault, for he inherited a badly broken immigration system.

a.) Volume, clearly much greater than ever before. As Sullivan says,

We are in a new era of mass migration, and the US government is demonstrating in real time that it has no idea how to control it. From January through July, well over a million undocumented migrants were intercepted at the border — Venezuelans, Cubans, Haitians, Romanians, among others — and the pace is accelerating. If those intercepted in the first half of this year formed a city, it would be the tenth largest in the US.

There are some short-term factors behind this: earthquakes, natural disasters, political unrest, Covid, gang warfare, and economic stagnation. But there is also a long-term one: climate change, the impact of which on migration from the south to the north is increasingly felt across the globe. The sudden wave at the border is a 21-year high — after both the Obama and Trump administrations had kept the numbers to around a quarter of that rate most years (excluding a sudden surge in 2019).

A further — and arguably central — reason for the acceleration is a change under Biden in how the US treats these intercepted newcomers.

I think even Progressive Democrats have to admit that this volume of influx is unsustainable, but you won’t hear them mention it. In fact, one could well get the impression from both Progressive and Center-Left Democrats that they favor open borders. We want to be compassionate, but no country can deal with this level of influx. Sullivan says that the tide of immigration, much of it illegal, is one reason why Latino support for Biden is waning, especially in towns near the border.

b.) Once you’re in, legally or not, you’re pretty much in for keeps. We all know that despite the requirement for formal applications to stay in the U.S., and rulings by immigration judges, many immigrants simply vanish into the population, not showing up for their court dates and lying low.  Sullivan:

So what, you may ask? Don’t those 12,500 have to get their asylum cases approved in order to stay permanently and legally in the US? Theoretically yes. But the wait for a court date can be several years (the average is around two and a half years) given our broken immigration infrastructure, after which it’s inhumane (as well as extremely difficult) to send people back. There’s also currently no way to force anyone to appear at the court, and 50 percent of removal orders — failed applications for asylum resulting in deportation — are issued in absentia, i.e. without the asylum-seeker showing up. The key stat: every year only around two percent of illegal immigrants are deported. You can do the math. That’s why another 60,000 Haitians are on their way.

This is why we badly need immigration reform, which of course will be sidelined for the next few months as Congress squabbles over Biden’s infrastructure and social reform bills. Don’t expect the initiative to come from the Democrats, many of whom equate immigration reform with immorality, nor from the Republicans, who have a lot to gain by doing nothing and letting people gravitate towards Trump as immigrants pour in.

c.) Many immigrants claim refugee status, but are really moving for economic advantage. To get asylum you have to be fleeing danger or persecution in your home country, and all immigrants know this. Many thus confect persecution stories to get in. It’s the savvy thing to do. Everybody in Congress knows this, but it’s ignored. Sullivan:

The other clear fact is that, by any sane definition, these are not people fleeing political or religious persecution, i.e. bona fide asylum cases. Most, including most Haitians, had already relocated to countries like Chile, but chose the US for economic reasons. And that’s great. They can apply legally, and see if they qualify. Instead, they are using the broken border, and fake claims of asylum, to jump the line.

Responding to the claim that, well, Sullivan himself is an immigrant, he notes that he went through the process legally, and it took him 18 years.

I agree with Sullivan here: the Democrats, if they’re to win the midterm elections next year and the 2024 election, would be much better positioned if they had a humane but workable immigration program.  We don’t want Trump re-elected while immigration is still broken and as he promises to build his damn wall.

Overall, Sullivan has a pretty gloomy prognostication about Biden aside from the immigration issue. You may disagree, but here’s his take:

Elsewhere in the West, mass migration has empowered the far right, and taken the UK out of the EU.

Yet in a very similar situation, when racial anxiety has already helped bring an unhinged authoritarian to power, and threatens to help him come back, the Democrats seem utterly blind to the danger. You want to take the wind out of the racist “Great Replacement” canard that appears to be gaining traction? You can huff and puff on Twitter, and feel great. Or you can get serious about border control.

The optics are also terrible — and compound a sense that the Biden administration is losing control of events. The scenes of death and mayhem in Kabul merge too easily in the mind with the squalor and disorder in Del Rio. Factor in the faltering vaccine program, and the prevaricating, incomprehensible shit-show of this Congress, and you can see how the image of a doddering incompetent in the White House is beginning to stick. And once that image imprints itself, it’s hard to escape it.

Worse: the immigration debate reflects an elite that simply cannot imagine why most normal citizens think that enforcing a country’s borders is not an exercise in white supremacist violence, but a core function of any basic government.

. . . If mass migration continues to accelerate under this administration, and Biden seems unable or unwilling to do anything about it, Tump could win that election in a romp. And deserve to.

Well, under no circumstances do I think an unhinged, authoritarian demagogue deserves to win, but what Sullivan surely means is that unless the Democrats get savvier, they’ll be hoist with their own petard.

37 thoughts on “Andrew Sullivan on the possible downfall of Biden”