Several readers sent me this story from CNN.com about astrology (click on screenshot below). And like me, when they saw it they assumed it was part of the regular CNN news feed, and so were appalled. One reader wrote this:

Woke up this morning to see this story on CNN.com. One of the best examples of astrological nonsense I’ve seen in a while. In a major “news” website, no less. Candles are the cure. Really one long ad for the “cures.” Reads like something in the Onion.

It is in fact a merchandising piece, but that’s not at all obvious, and it is on CNN.com and looks like a feature piece. I therefore pronounce this piece bullpucky and fault CNN for pushing woo, even if the network is doing it as a disguised advertisement. 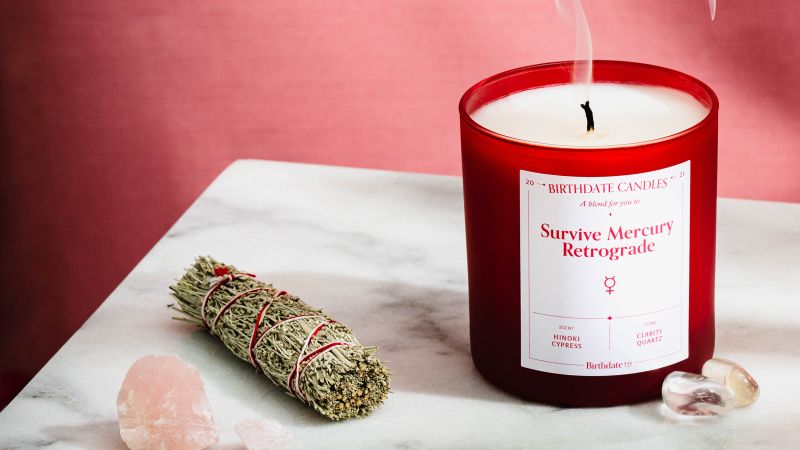 If you squint, you’ll see this at the top of the piece:

Enlarged: CNN Underscored is your guide to the everyday products and services that help you live a smarter, simpler and more fulfilling life. The content is created by CNN Underscored. CNN News staff is not involved. When you make a purchase, we receive revenue.

So here’s some of the woo it pushes, and at the bottom of the piece they link to products that can supposedly palliate the effects of the retrograde, like soothing crystals, candles, and blankets. This is hokum, of course; they’re using astrology (and presenting it as accurate and curative) to make money. That’s triply immoral. Fie on CNN!

But what exactly is Mercury retrograde, why are people so afraid of it and is there anything that can be done to avoid its wrath?

What is Mercury retrograde

Jaya Saxena, the author of “Crystal Clear: Reflections on Extraordinary Talismans for Everyday Life,” says, “From an astronomical perspective, Mercury retrograde is an optical illusion. Mercury’s orbit around the sun is shorter than the Earth’s, which means that when Earth passes Mercury in orbit, there is a moment when it appears to move backwards.”

But when it comes to the astrological significance of Mercury retrograde, Saxena explains, “It’s a different story. According to modern, Western astrological traditions, Mercury is the planet that represents communication of all kinds. When it goes retrograde, the theory is that our communications get thrown out of whack.”

You’ve probably heard warnings about not buying a new computer during Mercury retrograde, or horror stories about dropping a phone in the toilet; electronics gone haywire are typically associated with Mercury retrograde because they’re items we use to facilitate communication. But it’s not just the electronics themselves to look out for, Saxena says. You may find yourself replying all to an email you meant to forward or sending text messages that don’t go through.

But it’s not just electronic communication that’s impacted by Mercury retrograde — all forms of communication can go sideways during this time. “Perhaps you worded something sloppily and now your friend is mad at you, or you forgot to make a point in a meeting you wish you had, or you just feel generally flustered and misunderstood,” Saxena says. She also warns that Mercury retrograde can influence the way we communicate with ourselves, “so you may have a harder time being in touch with your own feelings and motivations.”

If it sounds like Mercury retrograde can and will make everything that could possibly go wrong actually go wrong, well … yes. “Basically,” Saxena says, “anything that involves you having to communicate, which is unfortunately just about everything, can be affected.”

So what’s to be done about this difficult time? While it may be tempting to go inside and lock the door for the duration, that’s not an especially realistic way to cope with Mercury retrograde’s disruptions — try these ideas instead.

In other words, enrich us by buying the products below. Astrology will help you lead a “smarter and more fulfilling life.”

Why is astrology seemingly making a comeback these days in major media like the NYT? I suppose the religious will say that as religion wanes, we need a substitute, and astrology is one of them.