I was afraid that when John McWhorter ditched his Substack site to write twice weekly for the New York Times, he would tone down some of his strong critiques of woke anti-racism. Apparently he hasn’t, as you can tell from his latest op-ed. (Try clicking below; it’s supposed to be for NYT subscribers but you might get free access, or see it via judicious inquiry). 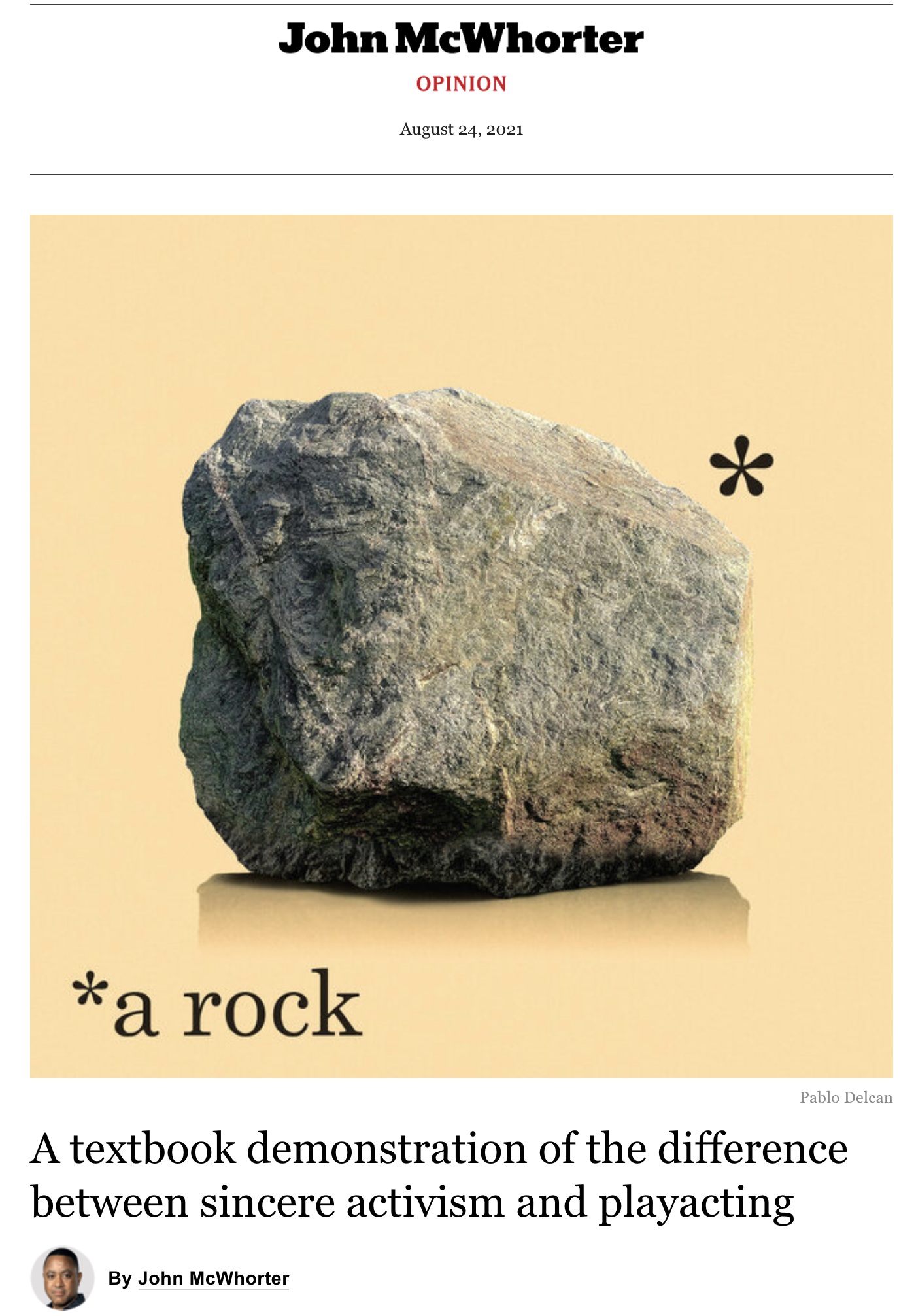 This piece was even the top of the editorial column yesterday afternoon: 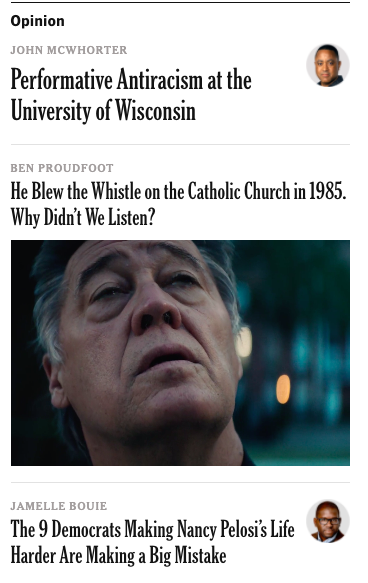 You probably know the story. On the University of Wisconsin campus there used to be a big glacial boulder (I’ve seen it) that was called “niggerhead rock”—exactly one time, by a local newspaper, the Wisconsin State Journal, in 1925.  Here’s that single reference, and archivists have been unable to find another printed usage of that racist name: 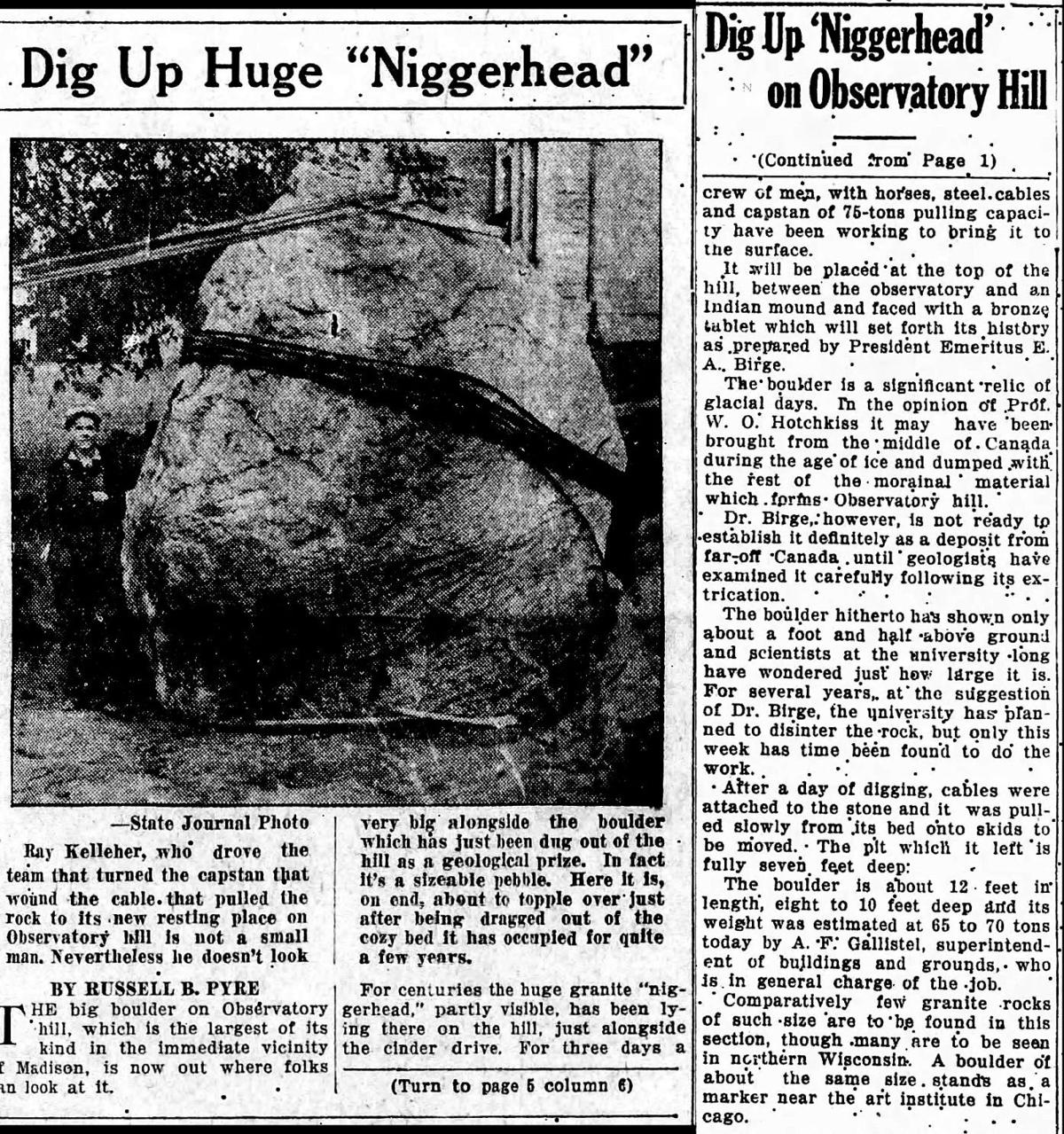 Since then, the 42-ton hunk of stone has been known as “Chamberlin Rock” after Thomas Chamberlin, a geologist and former university president. It’s sort of a local landmark, and this is what it looked like in situ.

Despite the n-word being used once, and 96 years ago, it apparently has rankled some black students, as the Wisconsin State Journal Reports:

The Wisconsin Black Student Union called for the rock’s removal over the summer. President Nalah McWhorter said the rock is a symbol of the daily injustices that students of color face on a predominantly white campus.

“This is a huge accomplishment for us,” she said on Wednesday. “We won’t have that constant reminder, that symbol that we don’t belong here.”

McWhorter also faulted the Wisconsin State Journal for printing the vulgarity in a 1925 news article.

University historians identified the news story as the only known instance of the offensive term being used. It’s unclear whether or for how long people on campus referred to the boulder as “Niggerhead Rock.” The term itself appears to have fallen out of common usage by the 1950s.

Kacie Butcher, the university’s public history project director, told the Campus Planning Committee that there may be other records beyond the State Journal story, but locating them is difficult because archived records are not well organized. What is well-documented during that time period, however, is the Klu Klux Klan’s active presence in Madison. Campus satire publications and comedy skits also mocked and dehumanized people of color.

Butcher told the committee that the rock’s removal presents an opportunity to prioritize students of color and engage in complex conversations.

Do you get a whiff of dissimulation here?

So the University administration ordered the rock, apparently now seen as a “racist monument” to be removed so the students could “begin healing.” As Spectrum News 1 reports, this was done on orders of the Chancellor herself. The rock now reposes in a distant locale:

After a process of recommendations, Chancellor Rebecca Blank approved removing it from its home on Observatory Hill. Her approval was necessary because it’s within 15 feet of a Native American burial site.

“Removing the rock as a monument in a prominent location prevents further harm to our community, while preserving the rocks [sic] educational research value for our current and future school students,” Brown said.

Friday morning, a crew started the process using harnesses around the boulder to lift it with a large crane. They began just before 7 a.m., and finished up after 11 that morning.

The rock will be moved to UW-Madison property on Lake Kegonsa, where university geologists and researchers can still have access to it.

Here’s the offending boulder being removed, probably at substantial cost (photo from the University of Wisconsin News):

To anyone with sense, removing the rock because it offends students based on a name used just once, is insane. The normal reaction to those students, and to the chancellor who ordered the rock’s removal to placate the offended, would be “Get a grip, people!”.  And, in fact, that’s exactly McWhorter’s message in his NY Times piece. He even calls it a “niggerhead” rock, printing out the word that, said the Times not long ago, couldn’t be used because intent doesn’t matter, only the effect of the word on people.

McWhorter’s piece is excellent, full of sarcasm, thoughtful analyis and good writing. And most of all, it says the thing that we all want to say when we see such reprehensible and ineffective acts of performative wokeness (but can’t say it unless we’re black):

The students essentially demanded that an irrational, prescientific kind of fear — that a person can be meaningfully injured by the dead — be accepted as insight. They imply that the rock’s denotation of racism is akin to a Confederate statue’s denotation of the same, neglecting the glaringly obvious matter of degree here — as in, imagine pulling down a statue upon finding that the person memorialized had uttered a single racist thing once in his or her life.

. . . If the presence of that rock actually makes some people desperately uncomfortable, they need counseling. And as such, we can be quite sure that these students were acting. Few can miss that there is a performative aspect in the claim that college campuses, perhaps the most diligently antiracism spaces on the planet, are seething with bigotry. The Wisconsin rock episode was a textbook demonstration of the difference between sincere activism and playacting, out of a desire to join the civil rights struggle in a time when the problems are so much more abstract than they once were.

How many of us, even though most of us believe it, would stay that the offending were acting, weren’t really offended, and were engaged in a grab for power? Or that they need counseling if they were that offended?  But of course a big share of blame falls on the cowardly administrators who caved into the students’ ridiculous demand (all bolding is McWhorter’s).

The true fault here lies with the school’s administration, whose deer tails popped up as they bolted into the forest, out of a fear of going against the commandments of what we today call antiracism, which apparently includes treating Black people as simpletons and thinking of it as reckoning.

True wokeness would have been to awaken to the tricky but urgent civic responsibility of, when necessary, calling out Black people on nonsense. Yes, even Black people can be wrong. As the Black professor Randall Kennedy of Harvard Law puts it in his upcoming “Say It Loud!”: “Blacks, too, have flaws, sometimes glaringly so. These weaknesses may be the consequence of racist mistreatment. But they are weaknesses nonetheless.” To pretend this is never the case where racism is concerned is not to reckon but to dehumanize.

Let us remember: The point here is treating a rock as psychologically damaging because of something someone dug up written about it at a time when people lived without antibiotics, television or McDonald’s. And yes, people often called big rocks and other things that ugly name in those days. But by that logic, we should be lifting away thousands of rocks nationwide. Note the perfect absurdity of an idea that America is “coming to terms” with racism by having cranes laboring all over the country moving boulders to different spots.

. . .My message here is not that the students should have just hit the books and kept their chinny chins up. Black America has problems that cannot be solved via personal initiative alone, and young people eager to help change the world are to be lauded for addressing them. If the Black students who had that rock pulled away do tutoring with Black kids in Madison’s more challenged public schools or get behind police reform efforts in the same city, then they deserve all due support. (I’d even consider giving them school credit for it.)

But the rock episode was settling for performance art and calling it antiracism. Kabuki as civil rights — it’s fake, it’s self-involved, and it helps no one. Yes, racism persists in our society in many ways, and administrators serving up craven condescension as antiracism are fine examples of it.

Them’s strong words, especially from the New York Times. In fact, I haven’t seen anything even close to it in several years. Remember, the NYT fired science reporter Don McNeil for simply saying the n-word in a didactic manner on a New York Times foreign excursion with students. He didn’t even print it, but here McWhorter prints “niggerhead”, and the word stays as a whole. How did he get away with it? Well, for one thing, McWhorter is black.

But the important thing is not just that he got away with it, but he got away with slapping down The Pretend Offended and calling them what they are: students who act out an outrage that’s not really felt. And the University of Wisconsin Administration also gets a trip to the woodshed. How refreshing to see a piece like this published in the New York Times! Is this a harbinger of change? Will the paper let McWhorter say exactly what he wants from now on, or is he doomed to be let go? (I can’t imagine he’d follow any orders to “tone it down.”) Stay tuned.

50 thoughts on “McWhorter back in form, speaks truth to wokeness in the NY Times”