You think you know performative wokeness? Get a load of this story.

A month ago I described (based on a column of John McWhorter) a remarkable act of performative wokeness at the University of Wisconsin at Madison: the removal of a 42-ton glacial boulder from a prominent position on campus because one time, in 1925, the local newspaper gave it a racist name, “n—-rhead.” It was called that only once, but this ancient transgression was sufficient to anger up the Wisconsin students and administration sufficiently that they hired a big truck to haul the landmark away.  The removal, of course, accomplished nothing to alleviate racism.

Nor does the latest shenanigan at U. Wisconsin (UW), this time involving Fredric March (1897-1975), a very famous American actor of the 1930s and 1940s. He won two Best Actor Oscars, for  Dr. Jekyll and Mr. Hyde (1931) and one of my favorite films, The Best Years of Our Lives (1946), and two Best Actor Tony Awards.  An active anti-racist, and alum of the University of Wisconsin, March’s fame prompted the University to name a theater arts center at UW-Oskhosh in his name (see photo below).

Then they found the TRANSGRESSION, described in the story below from the Racine Journal Times (and at greater length here at brightlightsfilm.com). NAACP stands for The National Association for the Advancement of Colored People, one of the most distinguished organizations in America battling racism.

The story: In 2017 the University Chancellor commissioned a report on the activities of the Ku Klux Klan on campus, and found that there was an “interfraternity society” with that name, though it had no connection to the real Klan. Nor did the KKK fraternity have any connection to white racism or terrorism. (More information below.)

As the brightlights link above reports, the UW-Madison fraternity was an import from the University of Illinois. The name might have been stupid, but there was nothing Klan-like about the honorary fraternity:

Illinois’s honorary Ku Klux Klan (labeled for shorthand in this article as HKKK to distinguish it from the actual Second Klan/Invisible Empire, labeled IE) visited Madison in mid-1919 and jump-started the first year of a UW chapter for the 1919-1920 academic session; every known constitution, charter, or document connected to the HKKK at either campus calls only for each individual fraternity to elect its most outstanding junior to the HKKK and for the interfraternity organization to be influential in campus affairs and social life – there is not a single word or idea related to the IE or that group’s bigotries; not only is there no evidence of an entry requirement based on one’s racial views, HKKK members had no agency in even becoming members – your academic/extracurricular performance alone conferred membership as a surprise honor to the inductee; no ties between the HKKK and the IE have ever been found; the HKKK carried that name at the UW for just three or four years; official HKKK photos those years in UW publications are devoid of anyone in blackface and of any IE symbols, sentiments, clothing, or paraphernalia – showing, instead, members in suits and neckties, formal wear, casual attire, and team uniforms or sporting cartoonish top hats and pushing baby carriages for an initiation ritual.

Sadly, March was in the honorary group for one of those three years. After he left UW, he embarked on a lifelong legacy of antiracism and defending the civil rights of African-Americans. From brightlights:

By Easter Day 1939, Fredric March (born Racine, Wisconsin, 1897) had already won his first Oscar and was a dozen years into a 48-year marriage to a woman who in the 1920s was already recognized as one of the most politically progressive actresses in the American theater – Florence Eldridge. Three years earlier, March himself – with fellow activists Dorothy Parker, Oscar Hammerstein, Fritz Lang, and a few others – had been one of the principal founders of the Hollywood Anti-Nazi League. But heading into this particular Easter Sunday, the Marches were showing in the biggest way yet just how much they put principles above any risk to their box office, a recurring bit of behavior they surpassed many times over in the decades to come.

In that spring of ’39, when heavenly-gifted opera singer Marian Anderson, an African American, was barred by the racist policies of the Daughters of the American Revolution (DAR) from performing in Washington, D.C.’s Constitution Hall, Charles Hamilton Houston – the NAACP’s first legal counsel and Thurgood Marshall’s most influential mentor – initiated with other African American leaders a broad-based letter-writing campaign condemning the DAR for its actions, and Fredric March, a well-known compatriot on civil rights issues, was one of the first letter-writers they enlisted. And when these same leaders in blindingly short order organized a now beyond-historic Marian Anderson Easter concert at the foot of the Lincoln Memorial, the Marches’ names appeared on the event’s official printed program as two of the sponsors, and the husband-and-wife team made sure to take the day off from The American Way – a hit Broadway play denouncing Nazi ideology and anti-Semitism in which they were co-starring – to fly from New York to Washington in time to let Anderson’s glorious voice wash over them.

The second link describes much more anti-racism of March, including raising money for Dr. King’s activities, chastising JFK for moving too slowly on civil rights, and so on. He was closely associated with the NAACP.

A life of anti-racism and liberalism. Shouldn’t that count more than belonging to a fraternity bearing the KKK name but having nothing at all to do with the real KKK or its philosophy?

You know the answer: NO.  In 2018, a student-run council of the University voted 8-2 to remove March’s name from the Fredric March Play Circle: the auditorium named in his honor. By that time March was dead, so he didn’t live to see himself dishonored. 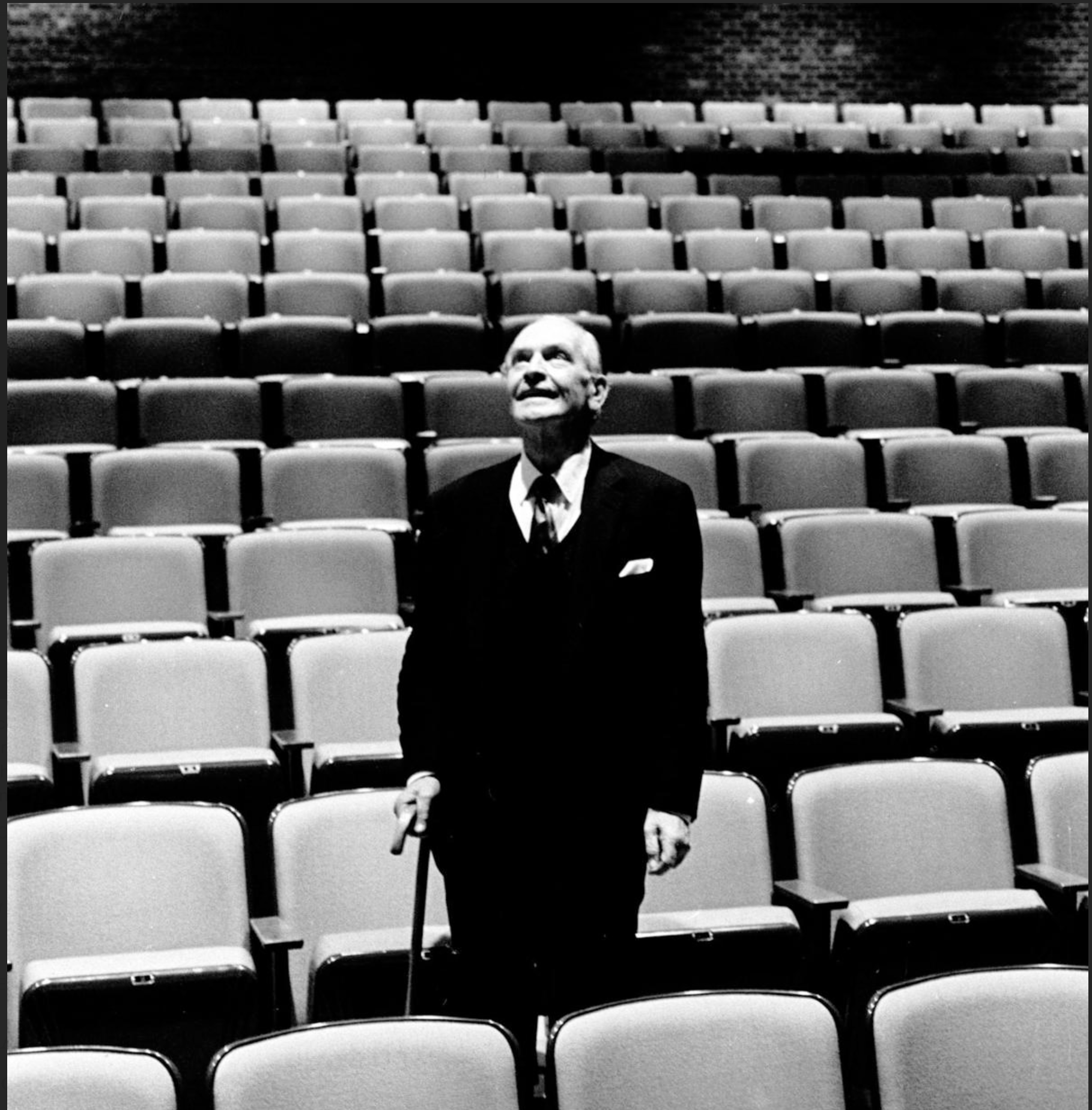 In fact, the honor should remain, for his life was surely a net plus for both antiracism and artistry, and the name of the theater is not celebrating any racism, much less the stupidly-named fraternity. And now, as the headline above notes, the NAACP, along with many people, both black and white, have asked UW to reconsider restoring March’s name. From the newspaper:

Three years after a UW-Madison group stripped the name of a prominent alumnus from a theater in the Wisconsin Union over a past association with a student group that shared a name with the Ku Klux Klan, the NAACP and others are calling for a course correction.

The national headquarters for the civil rights organization, along with two dozen scholars, actors and activists, sent a letter last week urging for the return of award-winning actor Fredric March’s name to a “place of honor” on campus.

The letter-signers say the legacy of March, a Racine native, has been marred because of the name removal, which they described as “guided solely by social-media rumor and grievously fact-free, mistaken conclusions.”

. . .Some examples in March’s history that the NAACP letter cites as indicative of his values: When he supported the singer Marian Anderson, who was banned from performing at Washington, D.C.’s Constitution Hall in 1939 because she was Black; when he participated in a secret strategy session with Martin Luther King Jr.; when he delivered a keynote address on the 10th anniversary of the Brown v. Board of Education ruling; and how he spent the bulk of his career seeking roles in “socially conscious” films.

“We remain confused as to why, on both Wisconsin campuses, the avalanche of readily accessible primary- and secondary-source materials detailing Mr. March’s loud, concerted and enduring lifetime commitment to fighting racism and anti-Semitism was never pursued, discovered, consulted, heard or made public — and why neither UW-Madison nor UW-Oshkosh has moved to correct this clear and unconscionable rejection of conspicuously demonstrable historic truth and academic rigor,” the NAACP letter signers wrote.

Just under half of the letter-signers are people of color, including Clarence B. Jones, an adviser and speechwriter for King; Oscar-winner Louis Gossett Jr.; and Bernard LaFayette Jr., a Freedom Rider and co-founder of the Student Nonviolent Coordinating Committee.

Indeed. There is absolutely no evidence of March’s racism apart from the name of the honorary fraternity, and he spent his life fighting for social justice.  So will the University reconsider? After all, they have a new request from the NAACP!

Nope. In fact, Chancellor Rebecca Blank wrote an “explanatory” letter in the New York Times about the removal of the rock and the de-naming of March’s auditorium.  It’s not convincing; the Woke never back down.

From Chancellor Blank re Fredric March (my emphasis):

In 2018, the university removed the name of Fredric March, the actor and an alumnus, from a student performance space at the request of students, and after months of discussion about the subject among our student leaders. It did so after the terrible events of Charlottesville and historical research showing incontrovertibly that March was a member of a campus group called the Ku Klux Klan, though the group was not affiliated in any way with the national Knights of the K.K.K.

While it is good that March went on to become a fighter for civil rights and equality, the fact remains that while a student here he aligned himself with a student group that echoed the K.K.K. name.

There are some things in our country’s history that are so toxic that you can never erase the stain, let alone merit a named space in our student union. Membership in a group with a name like that of the K.K.K. is one of them.

In other words, March is PERMANENTLY TOXIC. Note it’s not the Ku Klux Klan theater, but the Fredric March Play Circle.

Tell me, then, what does the removal of March’s name from the auditorium accomplish to reduce racism and bigotry?

Oh, and about that rock whose name was mentioned only once in 1925, the good Chancellor wrote:

A rock that was associated with a vile racial slur in the 1920s was also removed from our main campus, at the request of the Wisconsin Black Student Union and other groups. We came to this conclusion after more than a year of consultation and discussion, sparked by the death of George Floyd.

The death of George Floyd, a reprehensible murder, has still not been connected to police racism, but never mind that. When the NAACP asks for “reparations” for March, and Chancellor Blank, a white woman, says she knows better than the NAACP which “toxic stains of racism” can never be removed, we know we’ve gone down the rabbit hole. And so the madness goes on. Just once I’d like to see the Woke say, “Oops, we made a mistake! We’ll restore the name.” But they admit of no mistakes, even in a case as ridiculous as this one.

54 thoughts on “More Wokeness in Wisconsin”