First, I give a suggestion broached by reader Lee:

I have a suggestion for a future Caturday. As a fellow cat lover how about asking for photos of readers’ cats with multiple digits?  I have a favorite barn cat, a polydactyl with paws that look like it is well on its way to developing an opposable thumb. I can imagine cat scientists a million years from now finding his fossil as evidence of early Felis catus hand evolution.

Lee’s cat, Bigfoot, is shown below.

So, if you have a polydactylous cat, send me a photo, preferably showing the extra toes (two photos are fine: cat and paw). Deadline is October 10. 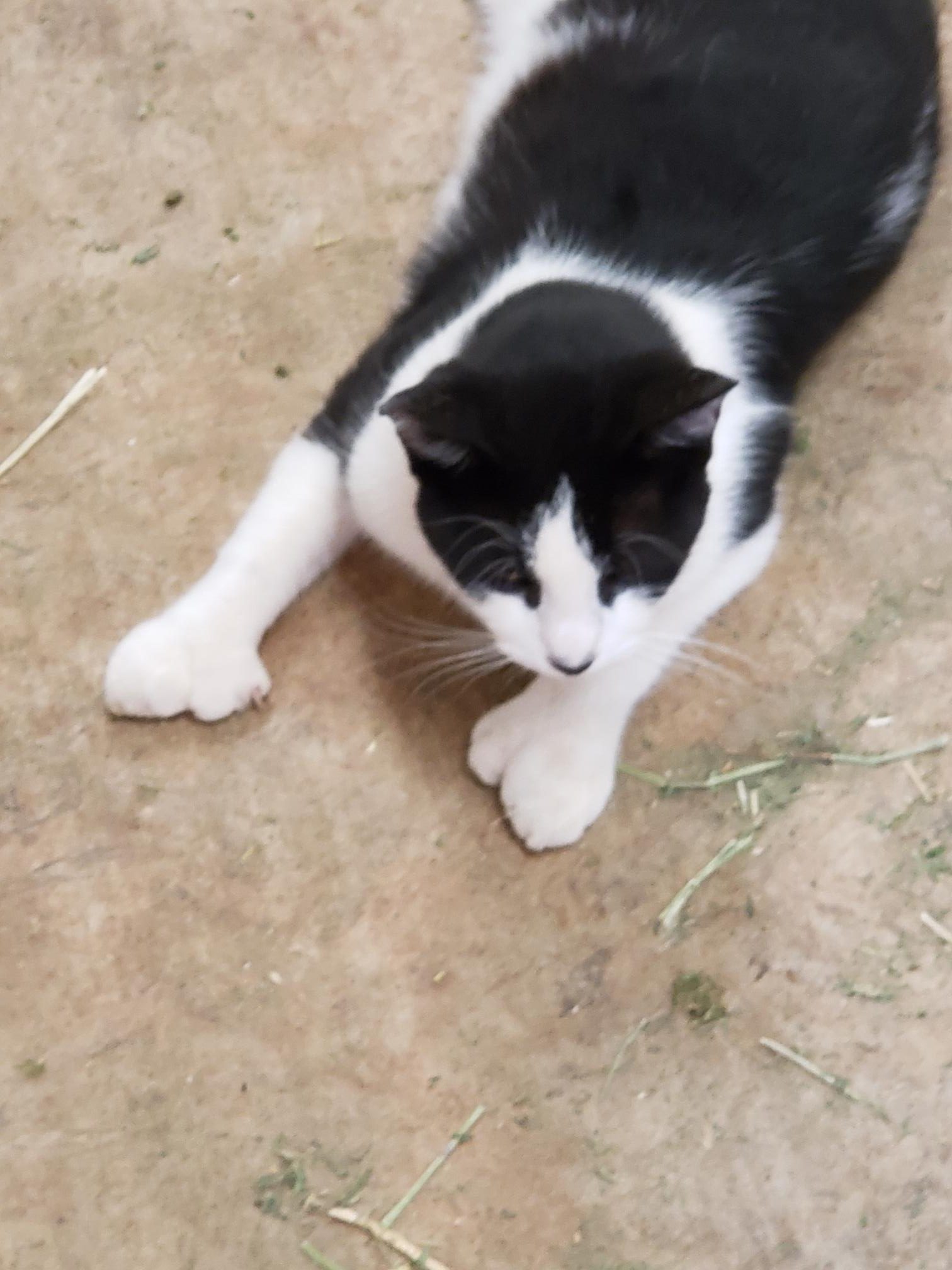 The Pittsburgh Post-Gazette had an article on a very unusual tour: a walking tour of “window cats” in Minneapolis, Minnesota, aimed at seeing cats sitting in windows or displayed by their staff. The tour attracted hundreds of viewers! Here’s an excerpt:

John Edwards, organizer of the annual Wedge Cat Tour, marking its fifth year, was amused by the neighbors’ alarm, considering his harmless intent. “Just show us your cats and there won’t be any trouble,” he joked.

Each summer, Mr. Edwards leads cat lovers through his neighborhood, stopping to see the resident furballs perched in windowsills, or pried off the purr-niture and toted outside to greet the crowd. Biographical details are shared, photos are taken, whiskers are rubbed, and the group moves on.

Over time, the Wedge tour — the only known neighborhood cat tour of its kind — has become a branded affair, complete with commemorative, limited-edition cat-tour buttons, tote bags and T-shirts. For safety’s sake, Edwards has even made handheld “Caution! Cat Tour Approaching” signs.

The tour has drawn big crowds. Due to COVID-19, last year’s event was virtual (an hourlong livestream of Mr. Edwards walking the route ), but in 2019, more than 300 cat tourists viewed 50-some felines.

Here’s one they go to see: “Fish, a 13 year-old cat belonging to Zach Randolph, sits on the porch of Zach’s home in the Wedge neighborhood.”

. . .In 2017, on the first tour, he led a small group in an uncharted meander through the neighborhood in search of random cats.

Since then, by pre-registering cats, he planned a 1.5-mile route, which takes several hours to travel.

Cat tourists have seen hairless breeds on leashes, a long-haired diva queen called Nanette Cleopatra Philivant, and the necktie-wearing Saul Blackheart, famous for his love of Joan Jett and ability to change computer settings by walking on keyboards.

On one tour, a guy emerged from an apartment building wearing an enormous black-and-white cat-head mask to present his matching cat to the group.

. . . Nina Hale, whose cat, Rilke, has been participating in the tour since 2018, calls it “a pure show of communal eccentricity” and “a celebration of urban living.” Hale, who takes the tour seriously enough to bring binoculars, said she loves the contrast between the crowd’s fervor for the felines, and the cats who, well, basically don’t give a crap. Rilke is preparing for this year’s tour by practicing “his blank stare of disdain” while Hale looks forward to the “utterly joyous” event. “This is what the world needs right now,” she said.

This is one of the best “Simon’s Cat” videos ever.  Simon gets a bee sting on his paw and has to go to the vet. As you can imagine, it’s pandemonium. Don’t miss this 13-minute video!

According to ScienceAlert (click on screenshot; see also here), a group of researchers at the University of Helsinki have studied 7 personality traits in more than 4300 cats; the goal was to gain more knowledge about cat behavior (there’s a paucity of information compared to d*gs) to help with problematic cats, rescuing cats and preventing euthanasia, and improving cat welfare. 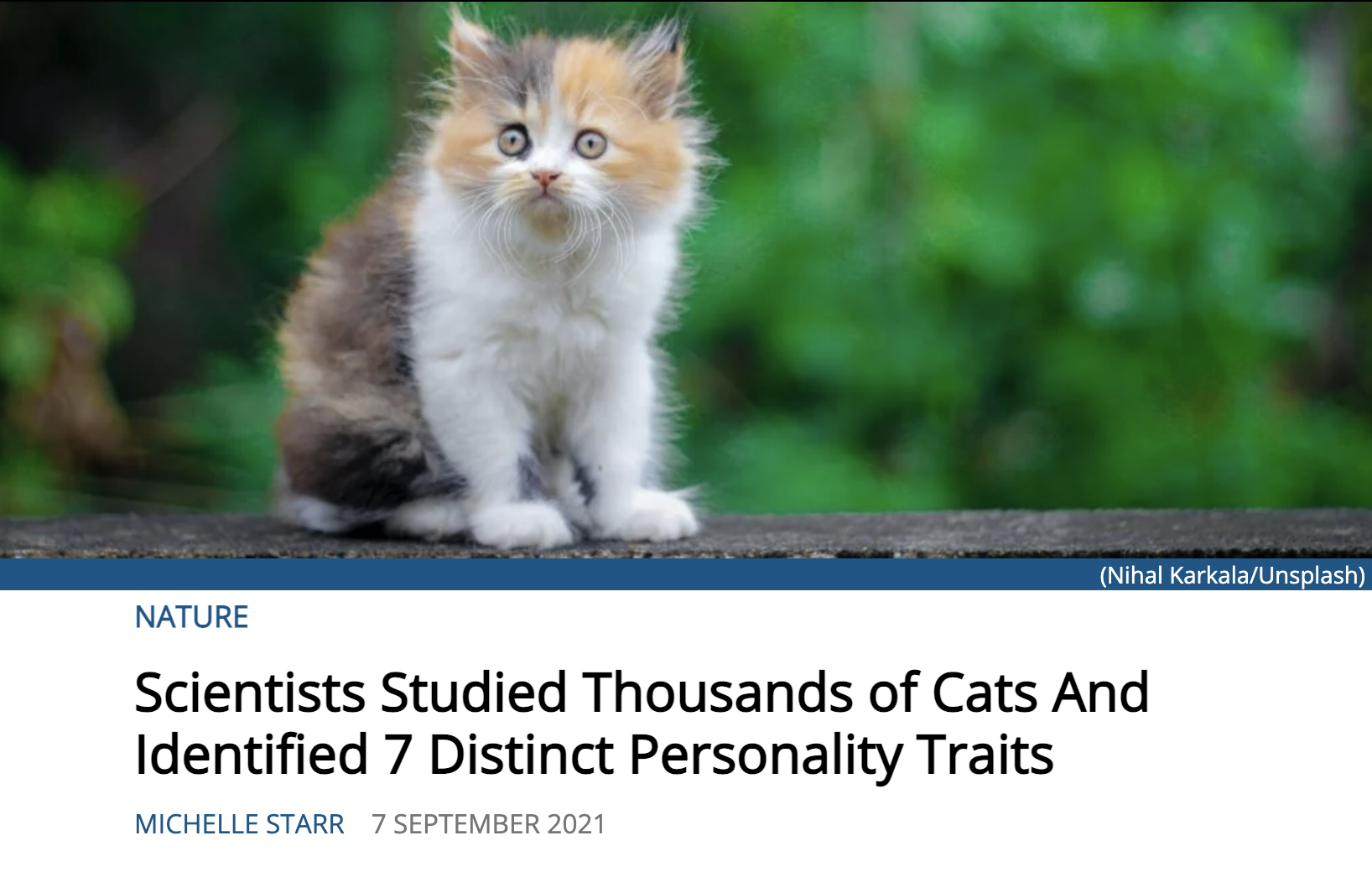 The second site says this:

In a questionnaire designed by Professor Hannes Lohi’s research group, personality and behaviour were surveyed through a total of 138 statements. The questionnaire included comprehensive sections on background and health-related information. By employing, among other means, factor analysis to process the data, seven personality and behaviour traits in all were identified.

“While the number of traits identified in prior research varies, activity/playfulness, fearfulness and aggression are the ones from among the traits identified in our study which occur the most often in prior studies. Litterbox issues and excessive grooming are not personality traits as such, but they can indicate something about the cat’s sensitivity to stress,” [Salla] Mikkola adds.

The ScienceAlert site adds this:

“The most fearful breed was the Russian Blue, while the Abyssinian was the least fearful,” says veterinary scientist Hannes Lohi of the University of Helsinki.

“The Bengal was the most active breed, while the Persian and Exotic were the most passive. The breeds exhibiting the most excessive grooming were the Siamese and Balinese, while the Turkish Van breed scored considerably higher in aggression towards humans and lower in sociability towards cats.”

The point of this research was not to perform behavioral analysis of the felines involved, but to demonstrate the validity of the team’s survey for collecting information on feline behavior.

The variation among breeds was the most salient finding, and is not that surprising. But to see more findings, consult the original paper below, free with the legal Unpaywall app:

Lagniappe: Cat is absolutely determined to get in the box!