When I visited Tibet some years ago, it was painfully evident that China was trying to wipe out native Tibetan culture, replacing Tibetans with the dominant group, Han Chinese. Pictures of the Dalai Lama were outlawed, and Buddhism itself was being suppressed: monasteries closing, Han stores moving in, and so on.

The same thing, but on a larger and more brutal scale, is going on with another religious minority in China: the Uyghurs—a Muslim ethnic group living largely in the big province of Xinjiang. The Chinese are eliminating them in every way possible, including putting them in “reeducation camps” where they’re brainwashed out of their Islam and turned into Han Chinese. Although reports from these camps are hard to come by, they’re dire, with forced labor, punishments, brutality, and, as described in the second video below, torture. There are 6 million Uyghurs, and it’s estimated that a million of them—one in six—are living in the camps.

The Chinese are also imposing strict surveillance on Uyghurs, monitoring their phones with special apps, ensuring that they don’t own “dangerous” books like the Qur’an, tripling the security budget, and installing cameras everywhere that are programmed to identify faces. While there are no mass killings reported, this is in effect a cultural genocide, one described in the two videos below.

The first is from The Economist, and the second from Al Jazeera. The content is somewhat overlapping, but it’s well worth the 18 minutes of time to watch both of them. See what happens when a dictatorship decides to get rid of a minority that won’t be “assimilated” into the Han culture. Both Trump’s and Biden’s Secretaries of State have called this a “genocide.”

China, of course, denies nearly all of it: it’s all in the interest of peace and security, and the camps are there to provide Uyghurs with “job skills.” (Note that the Rohingya, another Muslim minority, are persecuted by Myanmar as well, but nothing near on the scale of China’s repression.)

So what can the U.S. do about this. We couldn’t do much about Tibet, though India has provided a refuge for the Dalai Lama, and we can’t do much about the Uyghurs, either.  Our impotence on this issue is the major topic of Andrew Sullivan’s new column in The Weekly Dish (click on screenshot to read; it should be free): 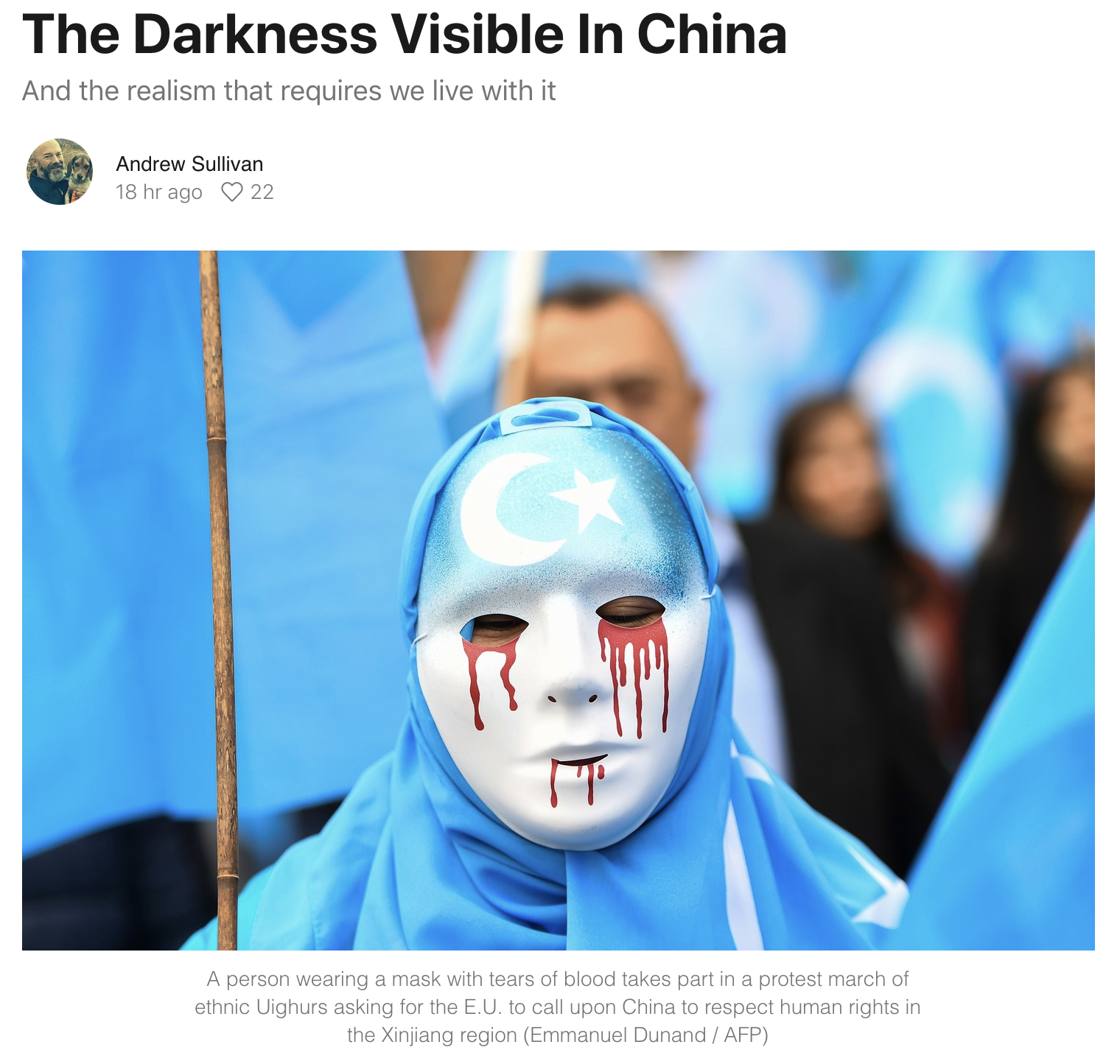 In view of China’s dictatorial system and genocidal intentions, what can we do? Sadly, Sullivan, at the expense of his own conscience, suggests that we practice Realpolitik: pragmatism. He does recognize China for what it is:

And what China truly is helps defuse some of the hysteria that demonizes America: China, not America, is a built on a racist (Han) supremacy. As Jonah Goldberg notes, China is far, far worse on “free speech, democracy, police abuse, racism, reproductive freedom, corporate greed, colonialism, and corruption.” What China does to the Tibetans and Uyghurs makes Israel’s treatment of the Palestinians (while lamentable) seem minor. Where is the BDS for China, one wonders?

Good question! What China is doing to the Uyghurs really is creating a genuine apartheid system, but of course Israel and not China is the Country of Demons.

And then Sullivan says things that disturb me, including writing off the vigorous country of Taiwan (Sullivan seems to think that a Chinese takeover is imminent) and ignoring what’s going on in Tibet. He has bigger fish to fry.

And no, Taiwan is not a vital US interest, and we shouldn’t pretend it is. Nor is there any conceivable way the American public would support a global war to defend an island on the other side of the world — a war which essentially every Pentagon war-game predicts we’d lose. We should, it seems to me, maintain a certain ambiguity about Taiwan, and stress to the Chinese the huge international blowback if it were to be the aggressor in such a conflict.

So Sullivan’s “solutions” involve, à la Gwynnie, conscious economic decoupling, calling attention to the Chinese use of forced or slave labor, asking us to boycott goods made with such labor (which may include products by the likes of Nike and Apple), and asking us to “shame them.” That’s right: shame both those companies and China:

We cannot prevent major US companies from becoming enmeshed with a totalitarian country; but we can shame them when they re-write their film scripts, or when they manufacture their products with slave labor, or when they distract from their enabling of real oppression with woke takes on “oppression” in America, or when they kowtow to China’s language police. It should be possible for there to be a revulsion at China’s model on both right and left in America. And Biden’s framing of our rivalry as one between a free society and a totalitarian one is a contrast that can also win converts abroad if we do not overplay our hand.

That will work in the U.S, since we have more of a moral backbone, but it will do jack for our relationship with China. None of Sullivan’s recommendations will do accomplish much except keeping U.S. companies from exploiting workers in other countries. As for making China our friend, fuggedaboutit. It’s like expecting the renaming of birds to have a serious effect on reducing racism.

Why is Sullivan so pessimistic? Well, by and large he’s right: China is a big and powerful country full of smart people, and its leadership is canny and has a plan. We’re just a minor impediment in their plan. But, it seems, the main reason Sullivan wants us to coddle China is—wait for it—we need their help to reduce global warming:

Unlike with the Soviets, we also have a global emergency we need China’s cooperation and help with: climate change. There is no longer any hiding of the fact that we are facing a global catastrophe, made much, much worse by China’s coal plants and breakneck growth. Without their signing off on drastic carbon reduction, we are all fucked. Similarly with one result of that climate change: a world which will likely endure ever more viral outbreaks of unknowable power, released as the ground thaws, species move, and temperatures gyrate. You can see the Covid disaster — and China’s key role in creating it — as a reason to cut them off, and isolate them. I understand that. But, given their technological capacities, how does this actually help us stymie the next plague?

Yes, we are facing a global catastrophe, and the savvy now admit it. And China has to pitch in if we’re to conquer it. But seriously, does Sullivan really think that if we go easy on China, and let them persecute the Uyghurs without protest and then hand Taiwan to them, they’ll be so well disposed toward America that they’ll take serious steps to reduce carbon emissions?  If you believe that, I have some land in Florida to sell you.

I’d like to hope that Sullivan is right. But I just can’t see it.

70 thoughts on “Andrew Sullivan recommends going easy on China and letting them have Taiwan, all to reduce global warming”