The Olympics aren’t supposed to be political, but that went by the board a while back. Countries have pulled out of the Olympics on political grounds, and Olympic athletes have made political protests from the medal podium, a gesture now outlawed by the International Olympic Committee (IOC).  Below is an MSNBC news report on the fracas caused by Gwen Berry, who, on the podium after placing third in the hammer throw in the U.S Track and Field trials, turned her back on the U.S. flag and refused to pay attention to the national anthem. This was a protest against  “police brutality and systemic racism.”

As the video shows, however, the anthem wasn’t scheduled to be played during the medal ceremony, so Berry was partly blindsided. Nevertheless, she performed a similar gesture during the Pan Am Games in 2019. For that the US Olympic Committee (USOC) suspended her. Since then, they’ve changed their rules, so that the USOC now allows the exercise of free speech during the games.  That puts the USOC at odds with the Big Guns on the IOC. To their credit, the Biden administration (via Jen Psaki) defended Berry’s gesture. 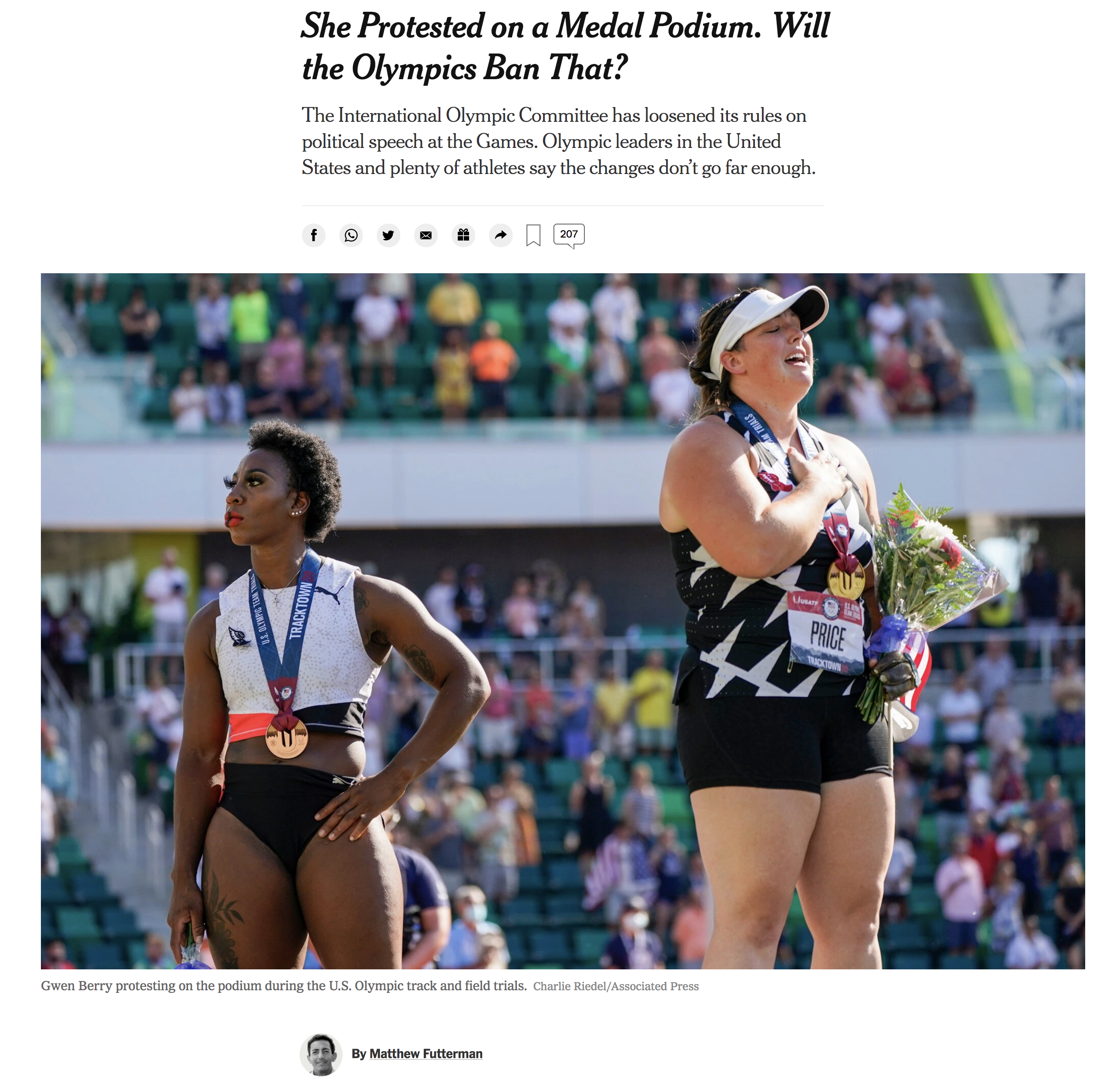 It’s not clear what will happen if Berry or anybody else violates the IOC’s rules; they say they will deal with it on a case by case basis. Conceivably they could strip violators of their medals.

What do I think of this? Well, in America I think it’s fine to demonstrate; that is, after all, free speech. I myself did something similar in June of 1971, when I became valedictorian of William and Mary’s graduating class. The valedictorian traditionally said a few words onstage, but the College knew I was a hippie Leftist and decided just to call out my name when the award (“The Lord Botetourt Medal”) was given for academic achievement. When they did that, I rose up from the audience, wearing a black armband to commemorate Kent State and to protest the invasion of Cambodia, and I raised my fist for a short while.  That cost me a summer job, as a marine institute where I had applied to work decided they wouldn’t hire a radical long-haired protestor. So be it.

What about the Olympics? I can see their point:

The way I.O.C. leaders see it, they must navigate the interests of athletes from more than 200 nations, many with differing political viewpoints, and deter anyone from taking attention from another athlete’s rare chance to stand on a medal podium.

They argue that one athlete’s demonstration in support of equality and human rights could offend another. For example, Israeli athletes could perceive a gesture demanding Palestinian statehood as support for entities that have called for the destruction of Israel.

And I’d hate to see the Olympics become a fracas of competing political gestures when the Games are supposed to bring people together. On the other hand, very few will want to protest, and at any rate I always come down on the side of free speech. If an athlete suffers professionally for making a gesture, like not getting on that Wheaties box, well, that’s the price they pay. Let it be added, though, that the IOC surveyed 3,547 athletes about whether “political speech and other forms of demonstration should NOT occur on the field of competition”, and 2/3 of them agreed.

So my view is “let a thousand opinions bloom on the Olympic podium”. But I do understand why this looks unseemly, and hope it doesn’t happen every time. I doubt that it will.

Tell you what—let’s take a poll:

43 thoughts on “Political protests from the podium banned by the IOC; do you agree?”